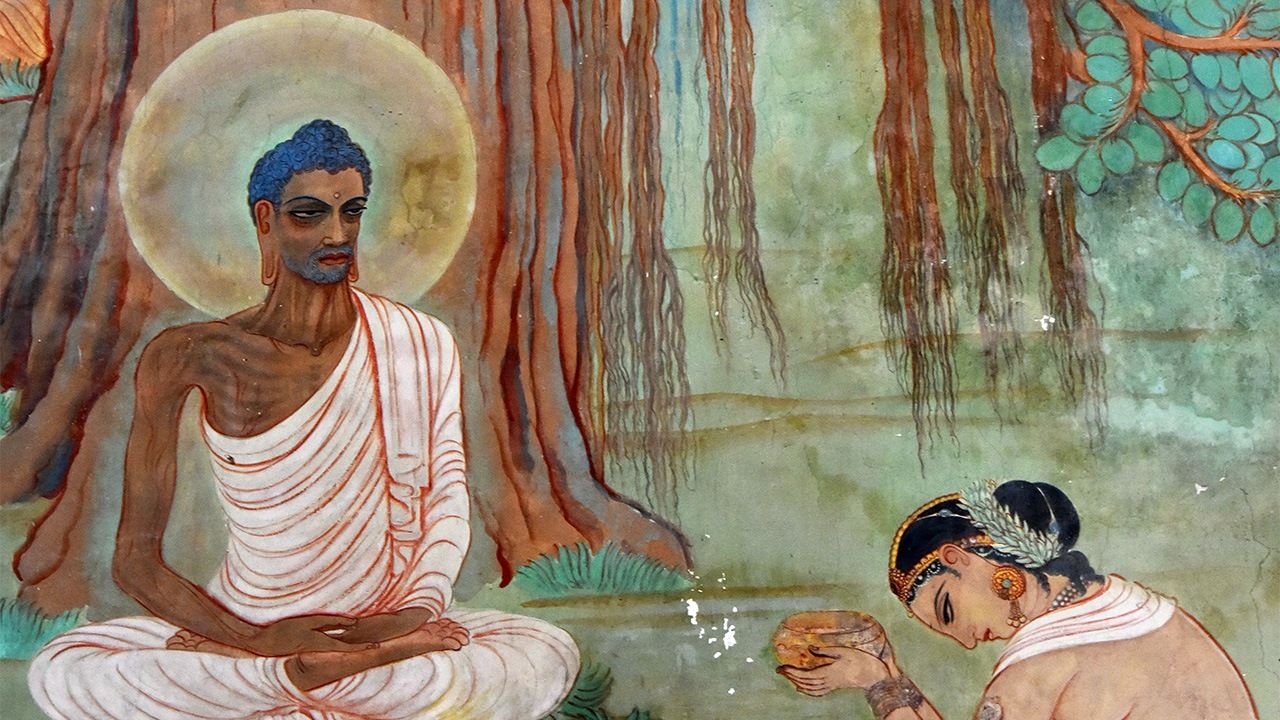 Buddhism at the Beginning: The Life of the Enlightened One

Culture Nov 11, 2022
Born in India around 2,500 years ago, Buddhism arrived in Japan via China in the sixth century. But the version of Buddhism that took root in Japan differed in important ways from the original teachings of the historical Buddha. How and why did the religion change over the centuries? This first installment of a series of articles tracing the development of Buddhism in Japan introduces the basic tenets of the religion as taught in India long ago.

Meditation as Way to Achieve Release from Suffering

Buddhism began around 2,500 years ago. Its founder was a person known to history as Siddhartha Gautama. Siddhartha was born into a noble family in the kingdom of Kapilavastu, close to what is now the border between India and Nepal. He spent his early years surrounded by luxury and comfort, and as a prince might well have grown up to become king. But as a young man, his eyes were opened to the suffering inherent in human existence. This discovery made him decide to abandon his princely status and forsake his life of material ease and comfort. He took himself into the forests alone and began a life as a religious ascetic.

What prompted him to uproot himself from his comfortable background and set off for a solitary life of uncertainty and discomfort? In his adolescence, he had come to realize that there are happy people and unhappy people in society. Although each person’s circumstances may be unique, all people have one thing in common. All of us are bound inevitably toward old age, illness, and death. In that sense, all people are equally unhappy. Life itself entails suffering. And this suffering cannot be assuaged or cured by riches or rank. For someone who had understood this truth, the social privileges of being a prince meant nothing. The only path left for Siddhartha was to dedicate his life to finding a way to escape the suffering inherent in life and to reach a state of tranquility and peace.

In the forests far from the towns, Gautama studied with religious renunciates, expert in the arts of asceticism and meditation, and undertook a solitary life of asceticism. He mortified his flesh, inflicting physical hardships and hunger on himself in the hope that by overcoming the pain he might obtain superhuman powers that would allow him to escape from suffering. But after six years of severe self-mortification and self-denial, he still hadn’t achieved his goal. He decided to change his approach. He abandoned his extreme asceticism and decided to concentrate on meditation alone. Thanks to this method, he was finally able to achieve enlightenment under the famous bodhi tree. After his enlightenment, he became known as the Buddha, or “enlightened one.” He is also known as Shakyamuni, an allusion to his origins in the Shakya tribe of ancient India.

A Manual for Overcoming Destructive Emotions

What was the nature of the Buddha’s enlightenment? It is impossible for one person ever to understand fully the dramatic changes that take place in another person’s heart. For this reason, a full account of the experience that the Buddha had when he reached enlightenment must remain a mystery. But we can gain an understanding of roughly what happened from the sutras and numerous other Buddhist scriptures, which communicate the content of the Buddha’s teachings based on his experience.

The Buddha taught that a release from suffering is only possible through one’s own efforts. There is no superhuman being who will come and free a person from suffering. He used the powers of meditation to examine his own heart and mind, until he discovered the root of suffering. He understood that the fundamental cause of our suffering comes from our clinging to an illusory sense of self. We allow ourselves to be governed by an ego that does not really exist. We see the world in a self-centered way that suits the interests of this imaginary ego. This self-centered consciousness is something that develops in us by instinct, but it is a mistaken view of the world. And from this mistaken understanding of the world stem the confused and destructive states of mind that Buddhism calls “kleshas.” These include emotions like anxiety, desire, jealousy, and fear—mental states that cloud the mind and lead to unwholesome actions, continuing the cycle of suffering.

Having understood the origin of suffering through self-observation, the Buddha came up with a set of practical guidelines for ending these unhealthy states of mind and freeing the self from the sea of suffering. This approach to spiritual training is unique to Buddhism. Buddhist practice consists of two main elements. The first is to study the sutras and other scriptures, and to reach a correct understanding of the teachings of the Buddha. The sutras also serve as practical manuals to Buddhist practice. The second is to practice the spiritual lessons learned from the scriptures, under the guidance of more experienced practitioners.

As a totally new kind of teaching, Buddhism exerted a powerful attraction over people, and the Buddha soon drew many disciples. The Buddha taught the methods he had learned from his own experience, without drawing any distinctions between his followers. After he died at the age of 80, his disciples kept his methods and teachings alive, and they continue to be followed by Buddhists in many countries around the world today. Under the Buddha’s leadership, his disciples made their way down the path of meditative spiritual practices he had mapped out for them. This community would become one of the central pillars that supported the development of Buddhism as a religion over the centuries that followed.

Perhaps the most important reason why Buddha’s teachings have survived without interruption across 25 centuries is that the Buddha designed his religion as a community run according to strict rules. He organized his followers into a single organization under his leadership called the “sangha.” The community was run according to a strict set of regulations called the Vinaya Pitaka, one of the three central sets of Buddhist scriptures. After his death, his followers continued to keep these regulations and maintained the sangha as an autonomous community of individuals that was run according to the rule of law. From the very start, the sangha formed the foundation of Buddhism. This brought numerous advantages.

The Vinaya Pitaka establishes clear relationships between teachers and disciples within the sangha. This makes it possible to transmit the Buddha’s teachings, in the form of the sutras and other scriptures, accurately across the generations. It also facilitates communication of the practical side of meditation and other Buddhist practices, which can be taught face-to-face from master to pupil down through the generations. This helped make the sangha into an extremely rational educational organization.

The establishment of a system of mutual assistance within the sangha transformed the relationships between a teacher and his disciples into mutual support in daily life. This meant that renunciates who had separated themselves from the secular world to devote themselves to Buddhist practices were provided protection and a kind of insurance against illness, injury, and old age. The sangha became a system of mutual support and assistance that its members could trust.

3. Maintenance of the Community Through Alms-Giving

The sangha of Buddhist monks was a community run according to the rule of law, whose members followed a humble and blameless life according to their own strict code of conduct. This example of upright conduct earned the community the respect of the outside secular world. People saw that the Buddha’s followers were people who lived according to strict discipline, and many were moved to give alms to support the community. These donations from ordinary people have helped to maintain the sangha into the present time.

By functioning as an organization with its own laws and regulations, the sangha was able to obtain a degree of autonomy. This has been an important factor in minimizing the risk of interference by external powers, and maintaining an appropriate environment for meditation and reflection. The sangha has functioned throughout its history as an autonomous community independent of outside authorities.

Of course, these four characteristics have not been perfectly maintained without interruption for 2,500 years. In the course of history, many things have happened that have contravened these basic principles. But the fact that these four elements were present from the outset as the founding principles of the religion was highly significant. Even if the sangha occasionally lost its way, it was relatively easy to set the community back on the right path as long as it still had its founding principles to return to.

The characteristics of early Buddhism can be summarized in two main points. First, the purpose of a religious life is meditation. Buddhism does not posit any external savior. Instead, practitioners use their own powers of observation to look within, to analyze the self, and to bring about improvements. Daily training through meditation is the chief method used to achieve this.

The second is the existence of the sangha as a community that provides a place for practitioners to concentrate on following the path to enlightenment. The sangha was established with the purpose of allowing practitioners to devote themselves to their practices while remaining dependent on the surrounding secular society for its daily needs. The community is run rationally according to the disciplinary code set down in the Vinaya Pitaka.

These two characteristics differentiate Buddhism from other religions. But in Japanese Buddhism, both these characteristics have atrophied. In fact, it would hardly be an exaggeration to say that they have disappeared altogether. This is a crucial point for understanding Japanese Buddhism. If the Japanese form of the religion lost these elements typical of early Buddhism, what other characteristics did it develop instead? In this series, I want to look at how Buddhism was received by people in Japan after arriving in this country via China. The position of Buddhism in Japan has fluctuated dramatically over the centuries. In some periods, the religion has cultivated close ties with the rulers and temporal powers of the age. At other times, it has suffered persecution and suppression. I want to look back on this long and vicissitudinous history and examine the unique path the religion has followed in Japan over the past millennium and a half.

(Translated from Japanese. Banner photo: A mural of the life of the Buddha at the Mulagandhakuti Vihara temple in Sarnath near Varanasi, India. © Aflo.)