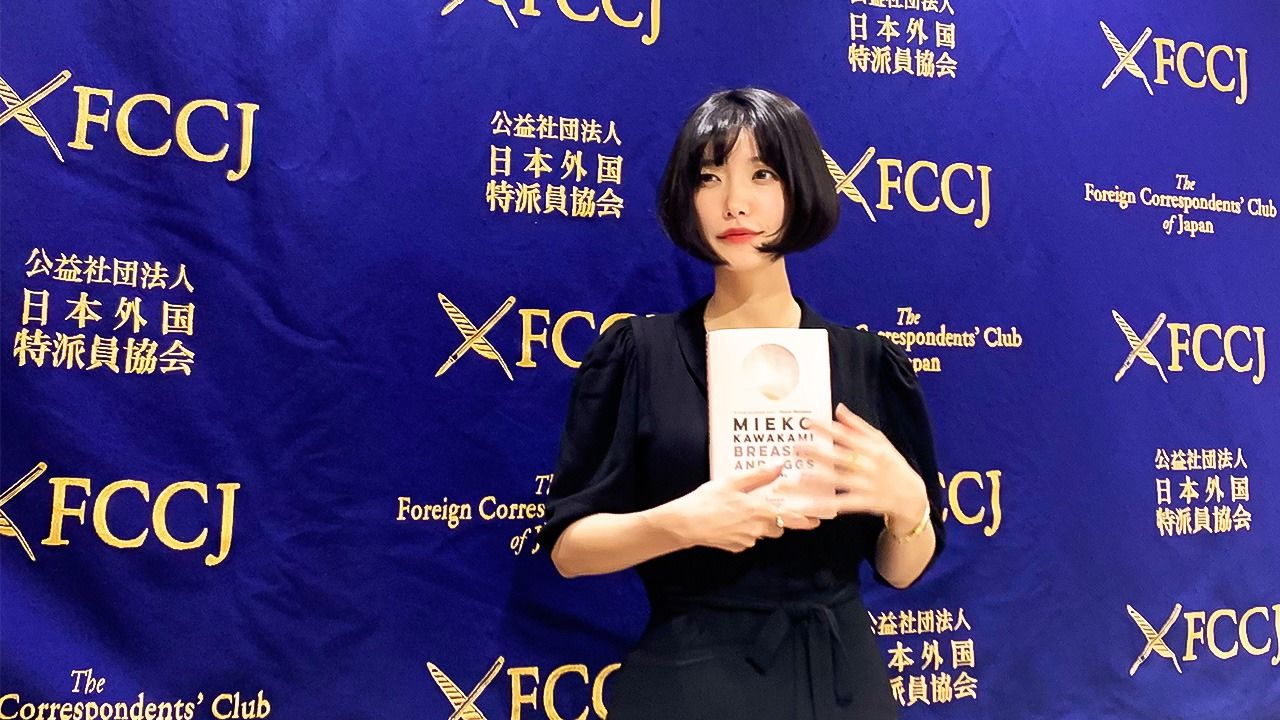 Kawakami Mieko: Amplifying the Voices of Japanese Women Through Fiction

Books Gender and Sex People Nov 20, 2020
Author Kawakami Mieko recently talked at the Foreign Correspondents’ Club of Japan in Tokyo about her novel published in English as Breasts and Eggs.

The Ethics of Reproduction

Since making her debut in 2007, author Kawakami Mieko has written prolifically and won a number of literary prizes. In 2020, her novel Breasts and Eggs was published in English to media acclaim. It has been heralded as a feminist work, with its strong narrative focus on women’s bodies.

Breasts and Eggs centers on a family of women from Osaka: Natsuko, her older sister Makiko, and Makiko’s daughter Midoriko. In the first part, Makiko, who works as a hostess, is obsessed with having breast augmentation surgery, despite the great expense. In the second longer part, Natsuko describes her life in Tokyo as an aspiring writer, alongside her uncertain investigations into how she can give birth through fertility treatment without having sex.

The book takes its title from Kawakami’s 2008 novella Chichi to ran, which won the Akutagawa Prize. However, it is actually a translation of her 2019 novel Natsu monogatari (meaning literally “summer stories,” with a play on the name of the main character Natsuko), a considerably expanded version of the original—the second part is entirely new and takes place between 2016 and 2018.

At a November 2020 talk at the Foreign Correspondents’ Club of Japan in Tokyo, Kawakami commented that the prizewinning novella was only her second work, written with great passion, but somewhat lacking in technique. Over the next decade, she developed as an author, became a mother, and decided, “In my next novel I wanted to write about the ethics of reproduction.” She felt an urge to revisit the characters from the earlier story, who seemed to be calling out to her.

Kawakami said that she thought a lot about the title. The main theme of women’s bodies was the same, so the original title was still apposite. “I thought about maybe adding a comma or a period in there or adding ‘New’ to the start,” she joked, but in the end settled on Natsu monogatari for the Japanese book. However, when it came to the English translation by Sam Bett and David Boyd, there was no obstacle to reverting to Breasts and Eggs.

On the long passages of speech that appear in her novels, Kawakami noted, “I like Dostoyevsky, and in his works monologues and conversations may go on for several pages. Some people might think this isn’t realistic. I think it’s quite typical in Osaka. Perhaps that’s a common point between Russia and Osaka.” In Breasts and Eggs too, the Osaka roots of the characters are important, although much of the action take place in Tokyo.

Kawakami said that many overseas readers were surprised to learn about such poverty in Japan. In the first part in particular, Natsuko remembers growing up in straitened circumstances. After her father left abruptly and threatening men started appearing outside the home, the family moved in with her grandmother, but the two adults soon died, leaving the girls to fend for themselves. Natsuko had to work while still in her early teens, scrambling to earn what she could—no easy task for a minor—during breaks from her classes. “One thing I remember is lying to the factory about my age every vacation, spring, summer and winter, all three years of middle school.”

Kawakami commented on being a mother in Japan, “To have a child and continue working is extremely difficult.” While her own success as a novelist has allowed her to do this, she does not want to be seen as a model, saying that she has had good luck, and other women face much harder circumstances. “Those women whose voices really should be heard are not actually reaching people.”

Patriarchy as a Religion

As a major project for her forties, Kawakami set out the goal of authoring a novel on religion. “I’d like to write about what kami [native gods] mean here in Japan or about society after Aum Shinrikyō,” she said, referring to the cult that launched gas attacks on the Tokyo subway in 1995. This time, she imagines a story centering on the youngest character from Breasts and Eggs, and she remarked that Midoriko’s voice is in the back of her head, talking to her.

Answering a later question, she added, “Often people say Japan has no religion or faith, but I think we’re in a society where patriarchy is functioning as a religion.” She noted that Japan has an emperor, with the unspoken connection to his position as the highest representative of Shintō within the country. It seems likely that this future novel will not limit itself narrowly to religion alone.

Similarly, while Kawakami said she welcomed the reception of Breasts and Eggs as a feminist work, the depiction of social disparity was another important aspect. She also commented that she wanted to write about how people are born, live, and die. Despite the characters’ sometimes unhappy existence in the shadow of death, a central theme that drives the book is the urge to live and create life.

(Originally published in English. Banner photo: Kawakami Mieko holds a copy of Breasts and Eggs at the Foreign Correspondents’ Club of Japan in Tokyo. © Mieko Kawakami.)