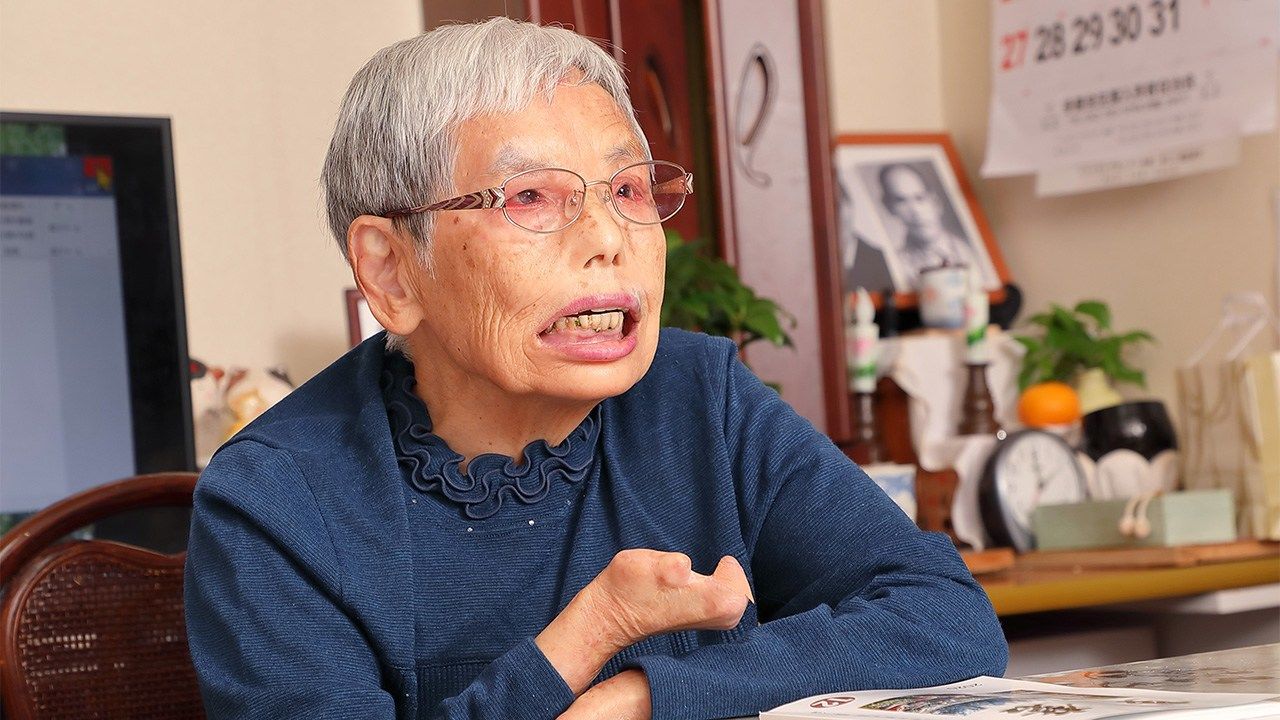 Society Health Cinema Mar 23, 2021
In the past, the Japanese government’s policy of segregation and social stigma of Hansen’s Disease robbed sufferers of their rights to lead normal lives. But not all patients allowed discrimination to define their fate. Yamauchi Kimie, who features in the documentary film Gaika (Songs of Triumph), chose to marry, raise a family, and share her experiences with others. We talked with her about her will to live in the face of extraordinary hardships.

Hansen’s Disease (leprosy) has haunted humanity since ancient times. Although effective treatments, including the drug Promine, have existed since the 1940s and a multidrug therapy has cured people of the malady since 1980s, misinformation and misunderstanding about the malady persist even today.

In Japan, patients were segregated at government-run sanatoriums, a practice that only ended with the repeal of Japan’s Leprosy Prevention Law in 1996. As of May 2019, there were some 1,200 former patients, many elderly and suffering lingering issues such as neural pain and deformed joints, living at facilities across the country.

A recent documentary film, Gaika (Songs of Triumph), by director Sakaguchi Katsumi looks at the lives of Hansen’s Disease patients like Yamauchi Kimie, a long-time resident at the National Sanatorium Tama Zenshōen in Higashimurayama, Tokyo.

Yamauchi was born in 1934 in Shizuoka Prefecture. She says that the discolored patches that are the first indicator of Hansen’s Disease started to appear when she was seven, the same year that the Pacific War broke out, but that no one suspected Hansen’s Disease. It was only when her hands and feet started to twist and grow numb that she was taken to a doctor. The diagnosis was juvenile chronic rheumatoid arthritis. She was given medication, but there was no improvement in her condition. 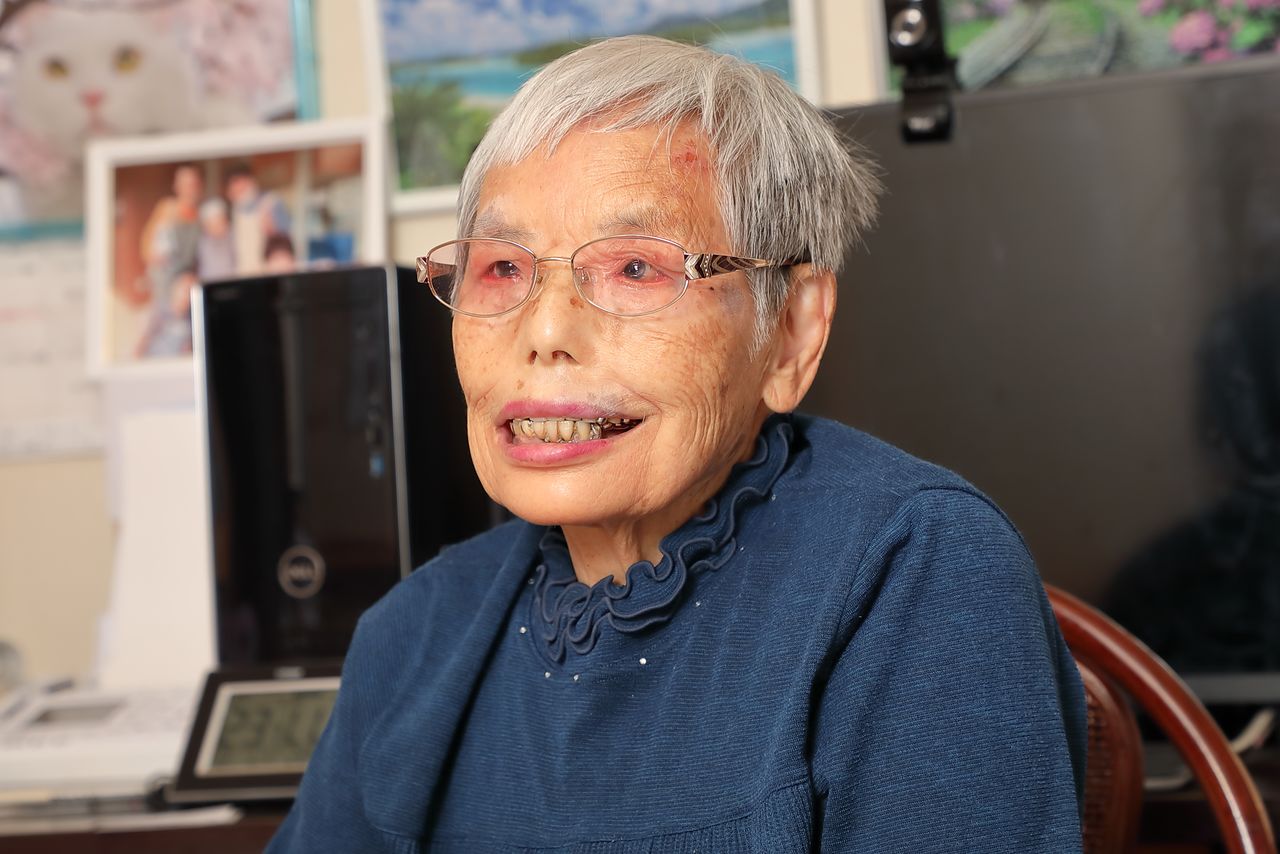 Yamauchi never misses a chance to inform people about Hansen’s Disease, including serving as a consultant on the 2015 Japanese movie An, which is set in the Tama Sanatorium.

“After the war, my classmates all went to junior high school,” she recounts. “But I couldn’t hold a pencil or turn a page, so I gave up studying and started helping at a dressmaker’s. As my disability worsened, though, I eventually had to stop working too.”

Yamauchi says her sister-in-law supported her immensely during these difficult times. When rumors began circulating in the neighboring that Yamauchi might have Hansen’s Disease, she was taken to see a specialist who diagnosed her with leprosy. She was 22 years old. Yamauchi also learned she was also sterile, possibly the result of the rheumatism medication she had been taking.

Treatment for Hansen’s Disease was available by this time, but Japan still maintained a policy of segregation. There remained a strong social stigma of the disease and patients and their families faced terrible discrimination. Being sterile, Yamauchi was not subject to segregation, but she decided to enter the Tama Sanatorium, far from her native Shizuoka, to save her family any difficulties due to her diagnosis.

Upon entering the sanatorium, she was told it was best to use a different name, a common practice at the facility taken to protect patients and their families. Yamauchi recalls this led to some early confusion. Writing home using her assumed name, her letters went unanswered. “My family thought it was a mistake,” she recounts. “They didn’t even bother to open the envelops, but put them aside intending to return them to the post office.” Several weeks later, a visit from an uncle solved the mystery.

It was unusual for residents at the sanatorium to stay touch with their family as Yamauchi did. It was only because her sister-in-law had gone around the neighborhood resolutely explaining the situation that the family was not subjected to any ill treatment.

Yamauchi describes her sister-in-law as “an extraordinary woman.” She brought her young children along during visits, ignoring warnings from those around her that they would contract leprosy. “She would respond by saying that if they don’t get the disease, it’ll prove there’s no reason for concern.” It was through her efforts that Yamauchi was eventually able to return home for visits.

For Yamauchi, coming to the sanatorium expanded her world. On hearing that a young woman had arrived, male residents took turns asking her to go for walks. It was in this manner that she met her husband Yamauchi Sadamu.

Yamauchi says that when the newlyweds returned home to announce the marriage, people in her old neighborhood were surprised that a person with leprosy could find a husband. “My husband loved to drink,” she relates with a laugh. “I used to joke that I married him out of sympathy and that once cirrhosis did him in that I would go on the hunt again. He went on to live for over 50 more years, the old swindler.” 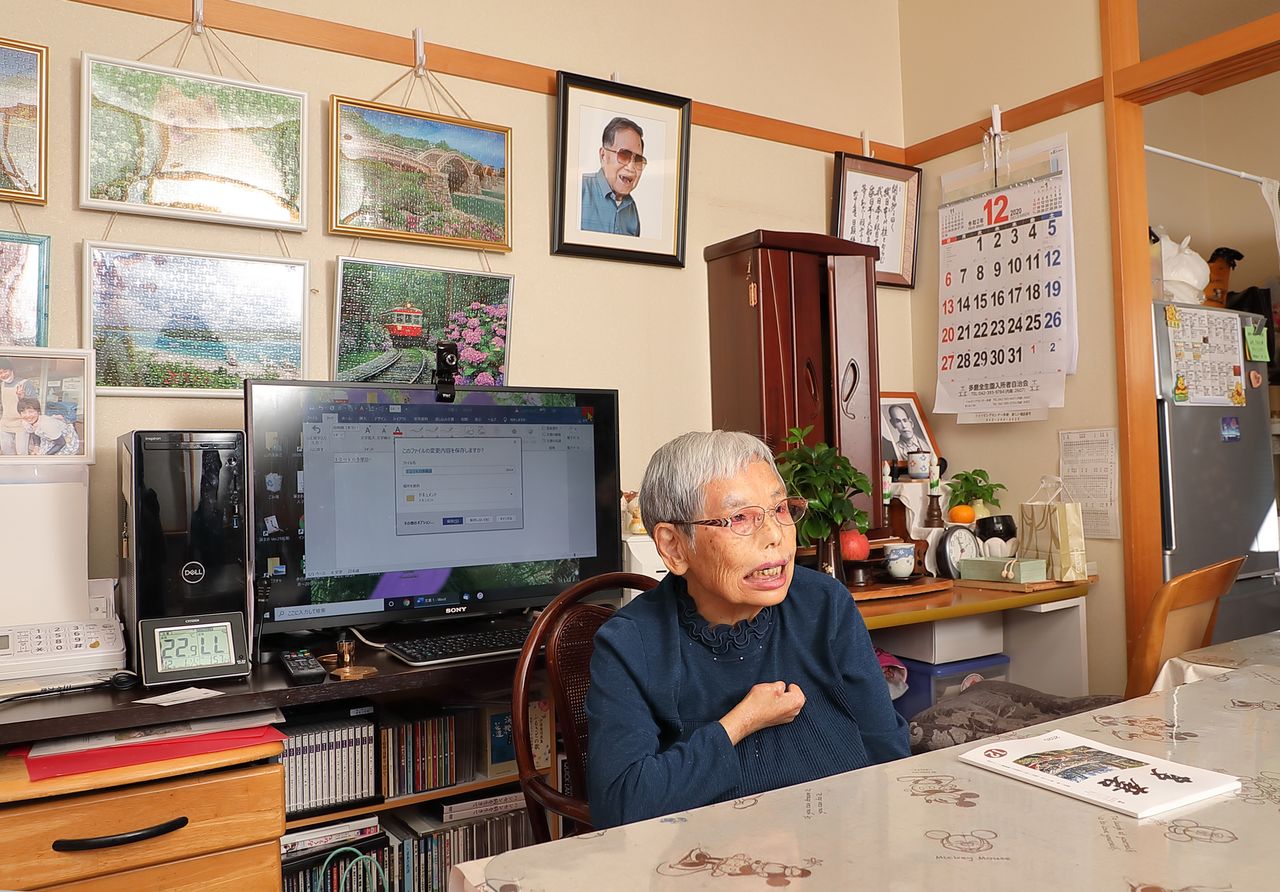 Gaika deals mainly with the forced sterilization of Hansen’s Disease patients. Under Japanese law, all leprosy patients lepers had to be sterilized as a condition of getting married, including Yamauchi’s husband Sadamu, despite the disease not being hereditary. The film looks at the mental anguish he and others endured as the result of the policy.

Yamauchi and her husband did not give up on their dream of having children, though. Yamauchi was 67 when the head priest at a nearby temple approached the couple about adopting an 18-year-old girl who had lost her parents when she was a small child and had been shunted between orphanages and foster homes. The pair agreed to adopt the girl, giving them a daughter, Mayumi. They would also be blessed with four grandchildren after Mayumi married and built a family of her own, giving birth to two children and adopting two more. 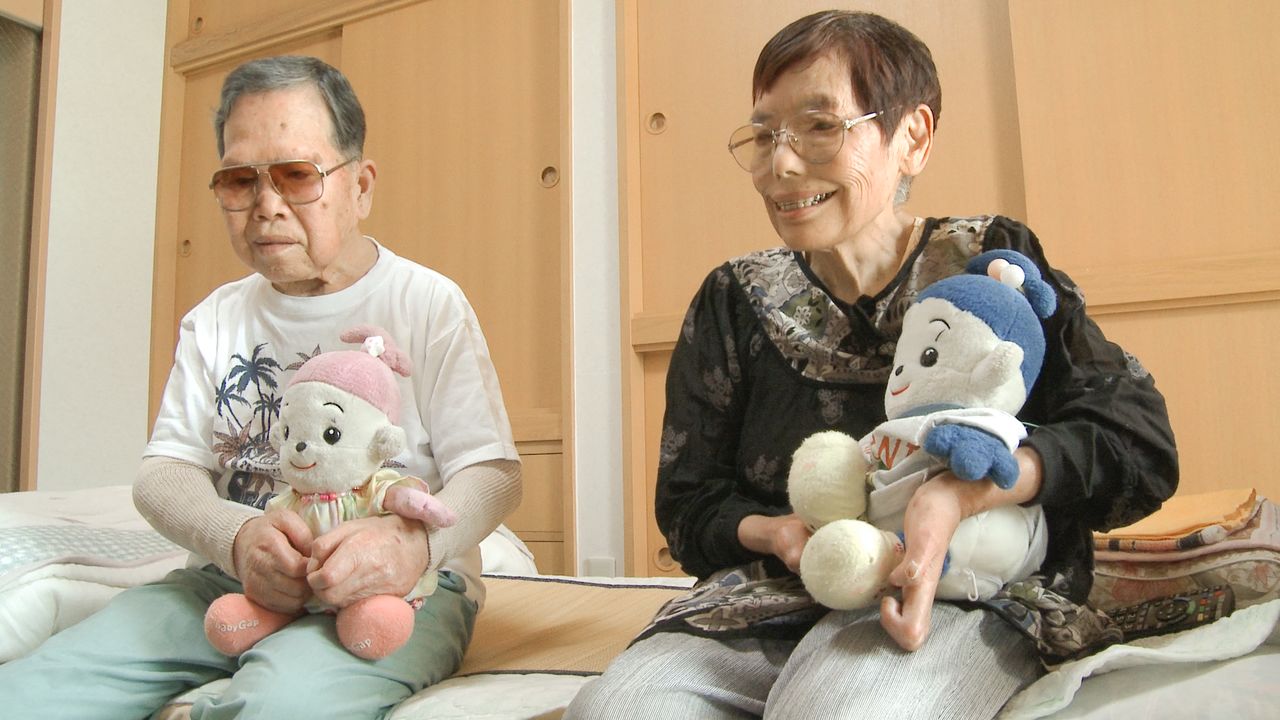 Yamauchi and Sadamu sit together in a scene from Gaika.

Becoming parents and grandparents brought the couple tremendous satisfaction. “My husband was able to hold his grandchildren in his arms before he died,” Yamauchi says. “And in spite of my disabilities, I was fulfilled as a woman. I understood that adopting a child would mean a lot of hard work, but I followed my heart. I have no regrets.”

Children Are the Future

There are touching scenes in Gaika of Yamauchi visiting with her daughter and enjoying the company of her grandchildren. She has thought that education was important since the time she was a girl. Although she seldom goes out now due to the coronavirus pandemic, she previously enjoyed interacting with children at a local nursery school.

“They’re always curious about my hands at first,” she says, recalling her visits. “They also ask why my eyes are red and they look at me sympathetically when I tell them I can’t close them properly due to my illness and dust blows in.” These interactions make her feel hopeful for the future. “There are so many prejudiced adults in the world today, but when I speak with children, I get a sense that they will change things for the better.” 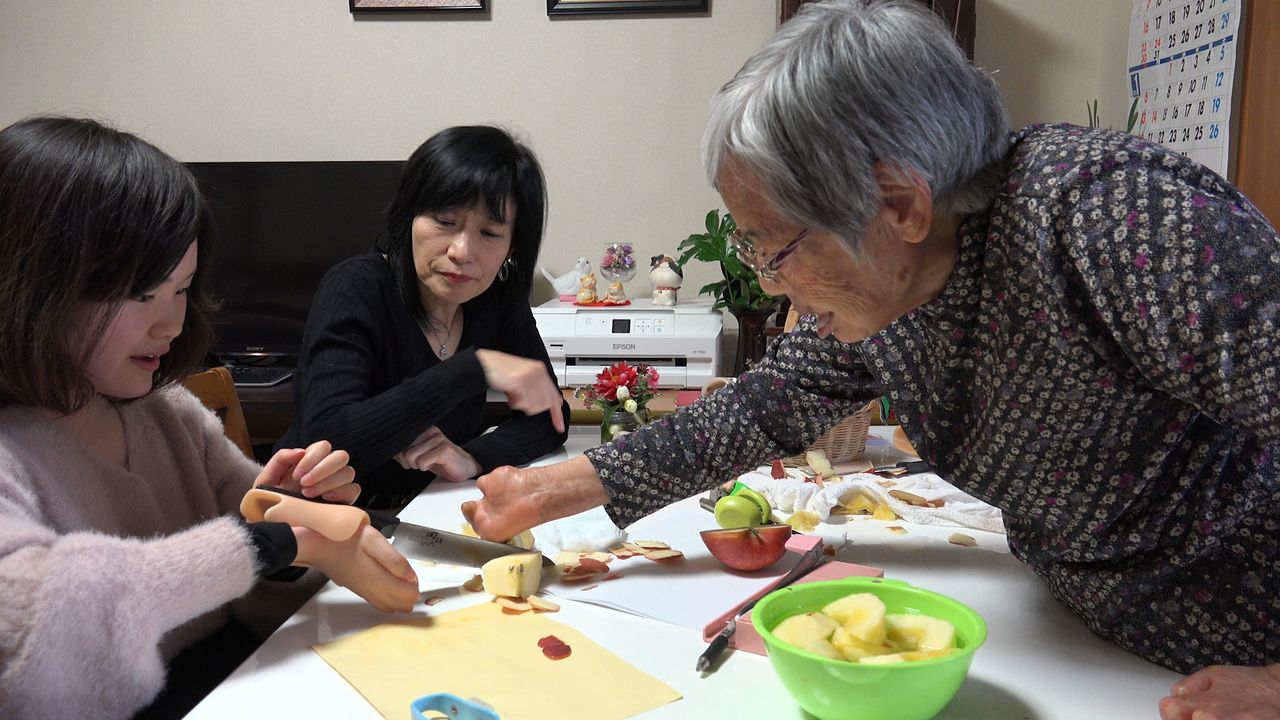 In a scene from Gaika, Yamauchi shows Moe, who has limited use of her hands, how to cut up an apple. (© 2019 Supersaurus)

Yamauchi also shares her story at schools and retirement homes. She notes that it is older people who most often hold negative stereotypes of Hansen’s Disease. “Some people can be quite aggressive and use disparaging language,” she explains. “When that happens, I quietly tell the person that we no longer use words like ‘leper’ in Japan. Instead, we say Hansen’s Disease. Then I explain how I overcame the illness to be here, out in the world.”

She maintains that it is these interactions, even the unpleasant ones, that have helped her grow and to become strong. “Talking to people about my experiences is something I do for them, but also for myself.”

Since she was 70, Yamauchi has used a computer to keep a diary and write poetry. She is equally adept at using the machine to sort photos, exchange emails, and even shop online, a practice she has grown quite fond of. “When I’m out shopping I always ask the shop assistant to get things for me,” she says. Chuckling, she adds that “I’ve always avoided making people uncomfortable, so online shopping is my idea of heaven.” 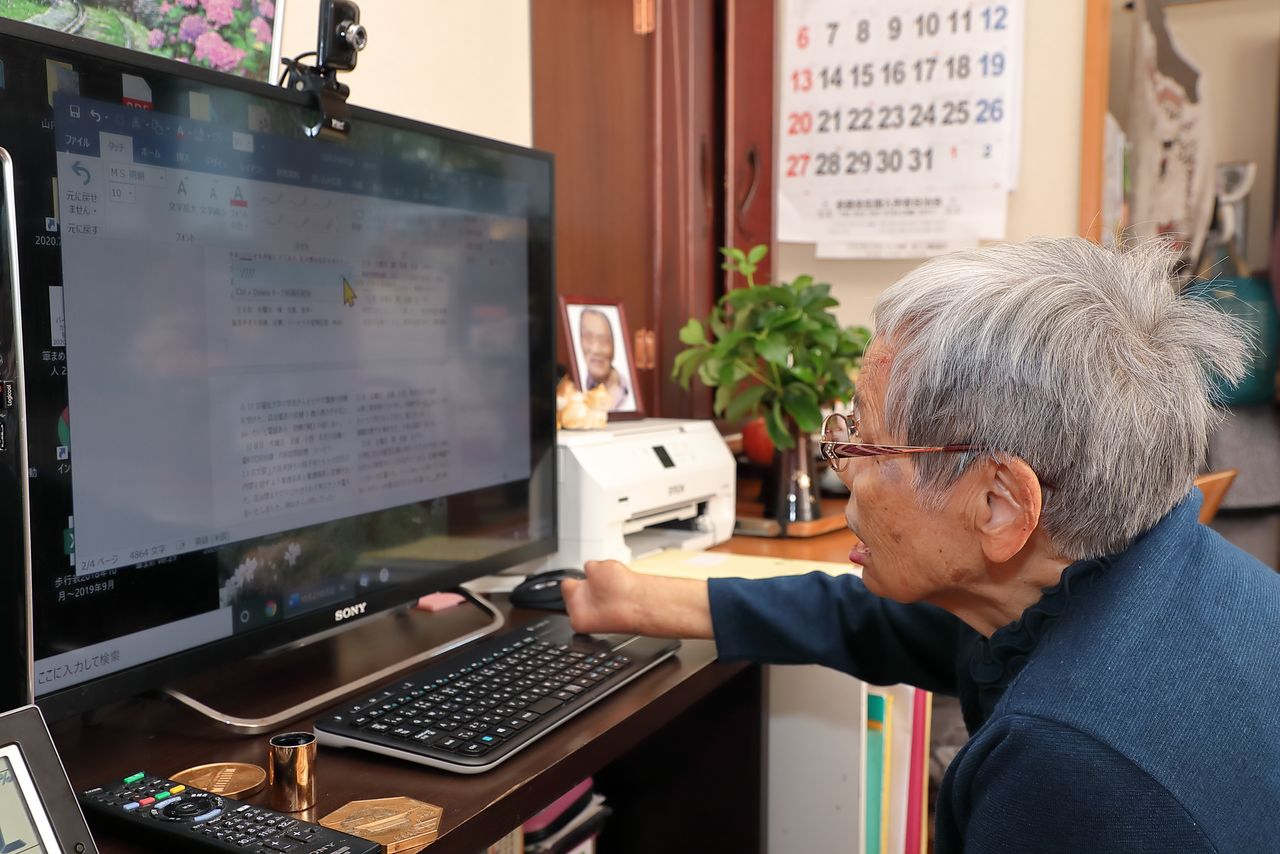 Yamauchi at her computer

Life in a Pandemic

The COVID-19 pandemic has sparked public fears that Yamauchi finds disturbingly familiar to her own experience. “We’ve seen people from the city who travel to the countryside being told to go home and children who contract the virus being bullied at school,” she says. “This is really a sad state of affairs. No one gets sick because they want to and it is unacceptable for people to be treated badly when they do.” 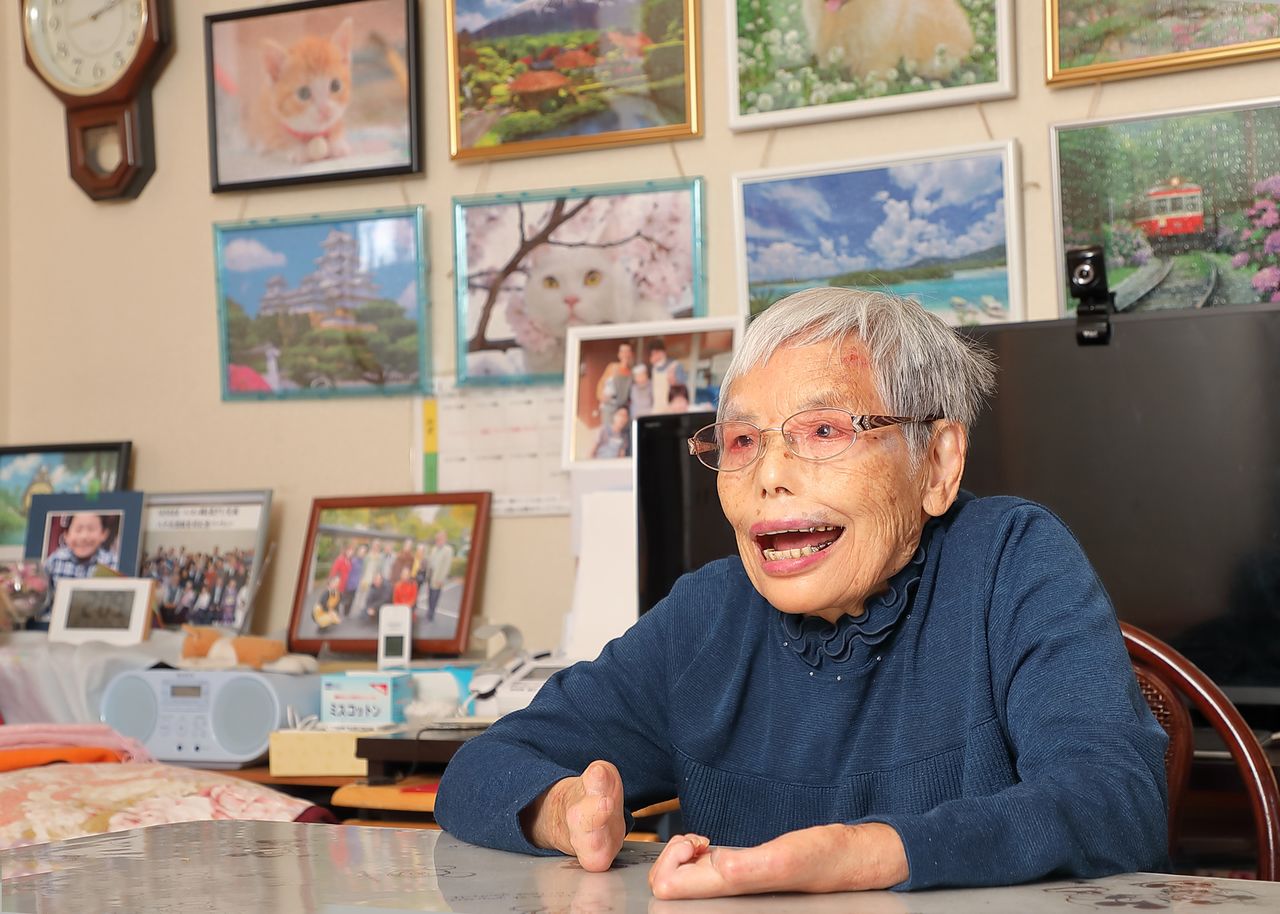 The kind, gentle tone of Yamauchi’s voice changes only once, taking on a serious tone when she speaks of the sharp increase of young people committing suicide since the start of the pandemic. “I want to tell the younger generation that there is plenty to live for,” she declares. “Death comes for everyone eventually, but until then, it is our job to face up to things and live. That is our destiny.”

Over her life she has drawn strength from her mother, who raised her through hard times and taught her to be brave. She recalls how later in life her mother suffered from dementia and would call out “Is that you, Kimie?” when she visited. “She could recognize me from my hands,” Yamauchi says. “She once told me she had saved a persimmon for me, hidden between the obi in the third drawer of her dresser. It was way past the season for persimmons, but I looked. To my surprise, there were two persimmons, shriveled to just skin and seeds. She said she had hidden them so the others wouldn’t eat them. I really felt my mother’s love in that moment. Living as best I could despite my disabilities has been a way for me to repay that love.” 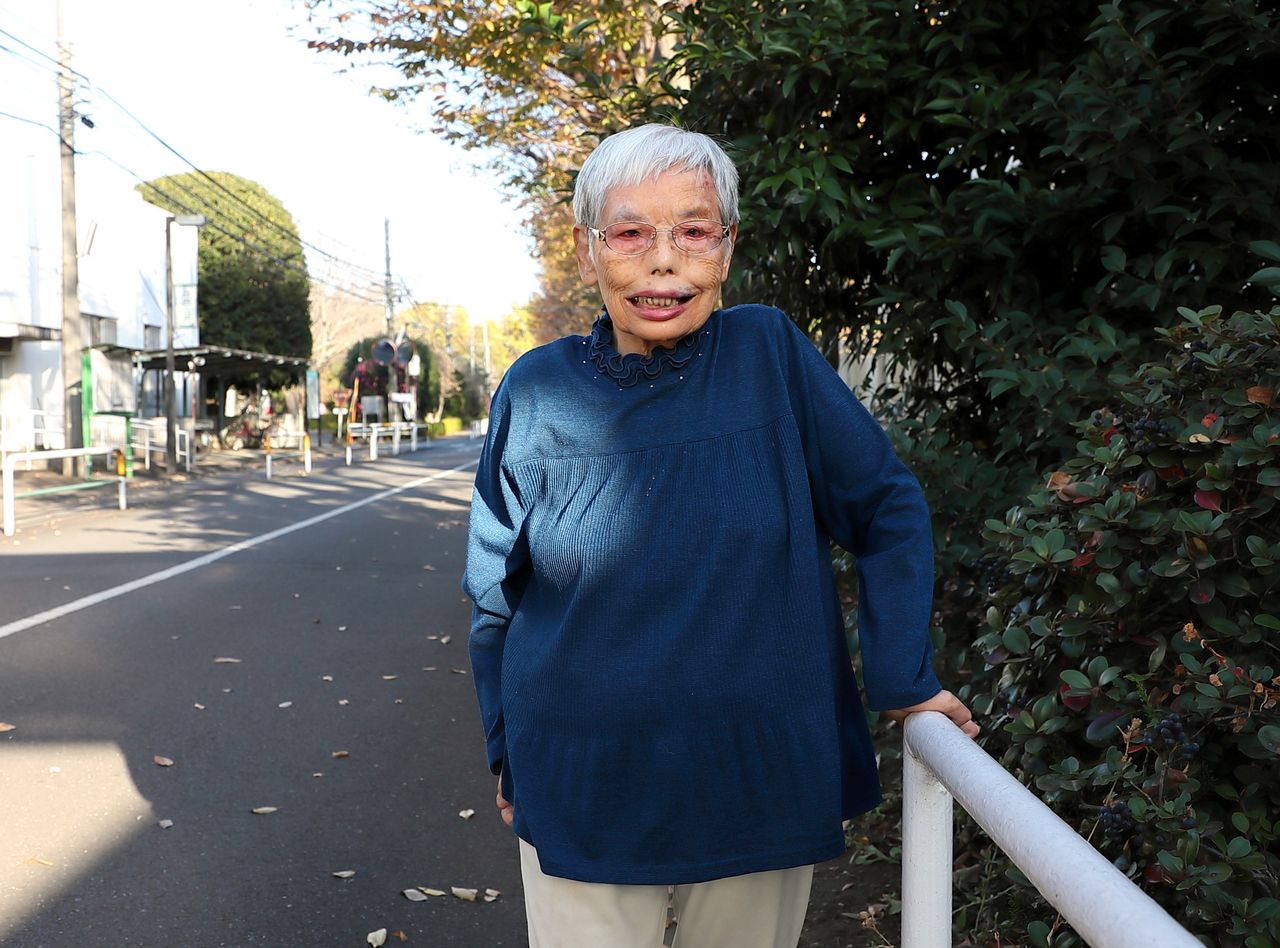 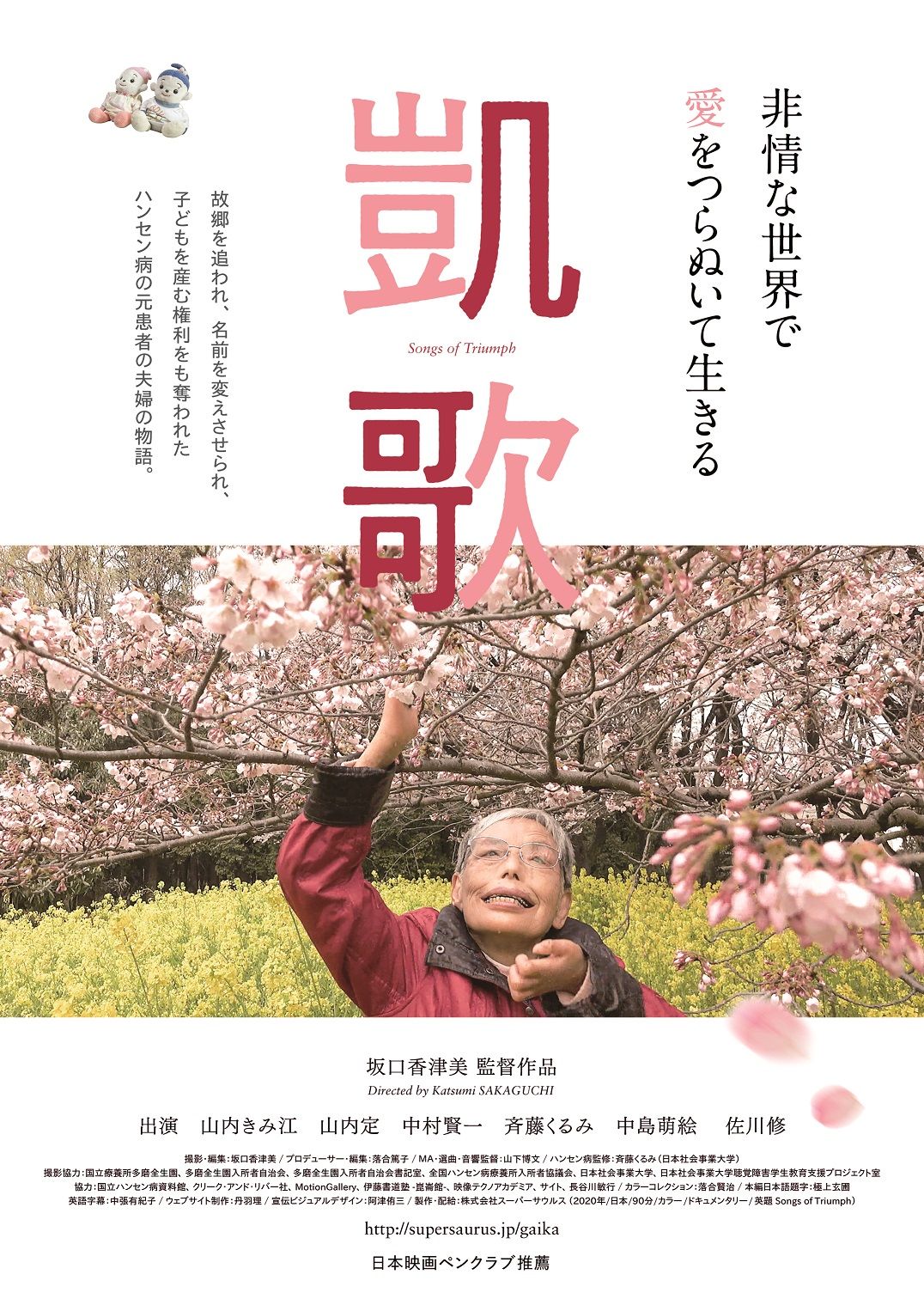