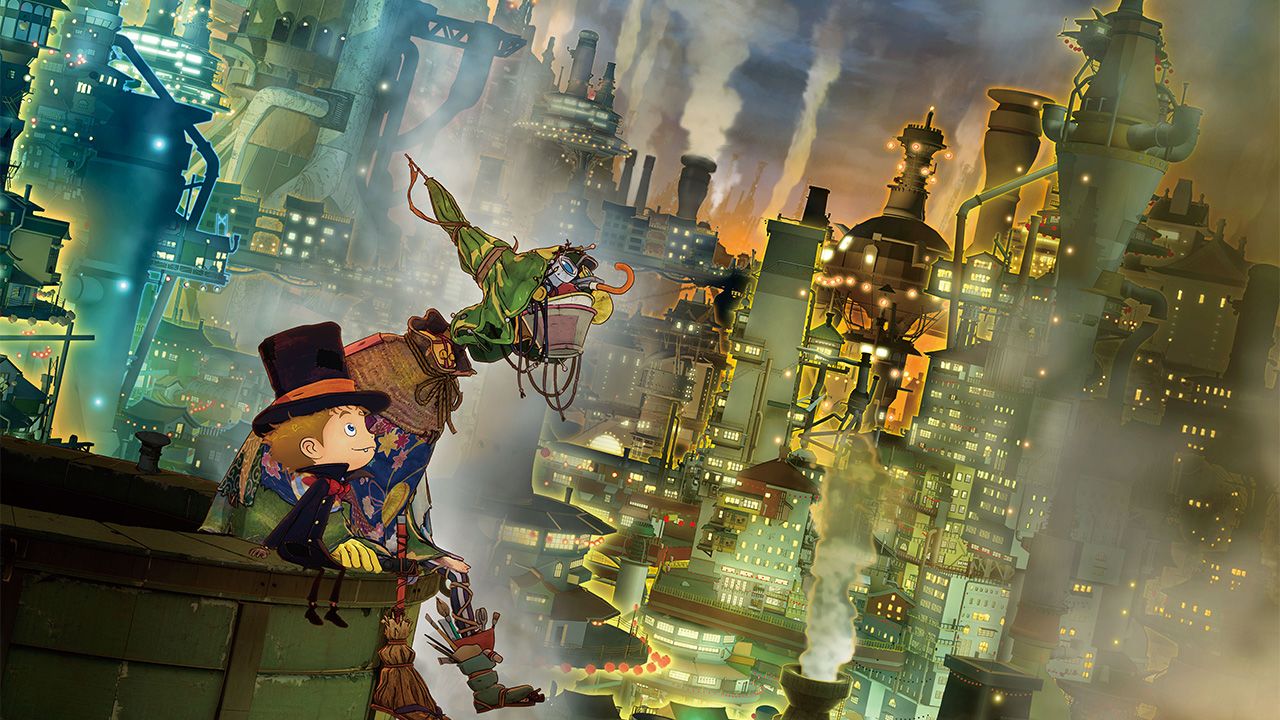 “Poupelle of Chimney Town”: A Boy Who Believes, Brought to the Big Screen

Entertainment Culture Art Cinema Mar 1, 2021
Nishino Akihiro, one of Japan’s best-known comedians, has built a successful second career over the past few years as an author and illustrator of innovative picture books for children. One of his most successful books is Poupelle of Chimney Town, which has sold more than 600,000 copies since it was released in 2016. The animated film based on the book, released on Christmas 2020, is an accomplished piece of anime entertainment that should enthrall kids and adults alike, all over the world.

Poupelle of Chimney Town (Entotsu-machi no Puperu in Japanese) is a bestselling illustrated children’s book by Nishino Akihiro. Not satisfied with being one of Japan’s most successful comedians, Nishino has branched out over the past few years and started to make the most of his talents as an author and illustrator. Poupelle attracted attention for the groundbreaking approach Nishino took to fund and produce it, using crowdfunding to raise the money he needed and then hiring a team of 33 artists and illustrators to help with the illustrations, coloring, and design. This novel approach was typical of Nishino’s maverick streak—he has never been afraid to try new things.

Even so, Nishino said all along that the book itself was merely a prelude for an anime version he hoped to make one day. He organized personal appearances and exhibitions to promote the idea, culminating in a unique “illuminated books” of his work at the Eiffel Tower in 2019. All of this was part of a grand project whose ultimate goal was to turn his idea into a film. That dream has now come true, and Nishino’s vision has been brought to vivid life as a masterpiece of animation full of surprise and discovery.

The story is set in Chimney Town, a grimy industrial inferno mantled in smog. Smoke and soot belch from the soaring chimneys that litter the landscape. Bruno is a tailor and “paper theater” storyteller who brings his fellow citizens a message of hope, telling fabulous stories about the blue skies and twinkling stars that lie beyond the thick layers of smoke, until one day he suddenly disappears. Rumors circulate that he was eaten by a sea monster. His son Lubicchi quits school and starts work cleaning the town’s soaring chimneys. Remaining faithful to the stories his father told him, Lubicchi continues to look up at the sky. For this, he is shunned by the rest of the town as an oddball and pariah. One Halloween night, he encounters Poupelle, a “trashman” born from one of the town’s countless heaps of smoldering trash.

Most of the townspeople avoid “dirty, smelly” Poupelle with disgust. For Lubicchi, though, he is his first true friend. Lubicchi tells him the stories he heard from his father of the stars beyond the clouds of billowing smoke, and confesses that he has lost the treasured bracelet his father gave him. Poupelle offers to help, and soon a close bond develops between the two.

One day, a giant black object washes up on the beach, and the population reacts with panic and fear. But Lubicchi recognizes this object: it is the ship that used to appear in his father’s paper theater stories. And if the ship is real, he reasons, then the stories about the stars must be real too. Convinced that “if you believe, you’ll find a way,” Lubicchi and Poupelle, together with a growing number of fellow-believers, set out to discover the world beyond the smoke.

Poupelle and Lubicchi aboard their ship. (© Nishino Akihiro/Entotsu-machi no Puperu Production Committee)

As author of the original story, Nishino wrote the script for the anime and served as overall artistic director. The 3D animation was the work of Tokyo’s famed Studio 4°C, a leading Japanese animation studio whose previous credits include Children of the Sea (Kaijū no kodomo), nominated in the Animated Feature Film category for the Academy Awards (2008), and Tekkon Kinkreet Black and White, which won a Japanese Academy Award for animation in 2008. The director is Hirota Yūsuke, who has succeeded in bringing the vivid, hyper-detailed world of the original book to astonishingly realistic life on screen.

An Entertainment Masterpiece of Sight and Sound

Along with the breathtaking panoramic scenery and dazzling visual effects, the music and other sound effects are a major part of the appeal of any first-rate anime. By using voice, music, and vivid real-life sounds, a film can bring elements of the story to life in a way that simply isn’t possible between the covers of a book. The cinema version of Chimney Town is no exception.

The role of Lubicchi, the young boy who believes in the stars, is voiced by Ashida Mana, who after building a successful career for herself as a child actor made a seamless transition to screen actor with her first major role in Omori Tatsushi’s Hoshi no ko (Under the Stars), released in October 2020. In her remarks from the stage at an event to mark the movie’s release, Ashida displayed a wisdom and maturity beyond her 16 years as she spoke of the importance of “belief.”

Coincidentally, “belief” and “stars” happen to be the main themes of Chimney Town too. Together with Itō Sairi, the actress who voices the role of Antonio the bully, Ashida uses her acting talent and remarkable skills of mimicry to give a wholly convincing performance as the young boy at the heart of the story.

Poupelle and Lubicchi share a moment in the film. (© Nishino Akihiro/Entotsu-machi no Puperu Production Committee)

Lubicchi’s faithful sidekick companion is the “trashman” Poupelle, voiced by Kubota Masataka, who played the main role in the 2020 NHK morning drama Yell. Kubota skillfully brings out the endearing humor and vulnerability of the character. Other members of the cast include Tatekawa Shinosuke and Koike Eiko as Lubicchi’s parents, Sonomura Jun as the boss of the chimney-cleaning company where Lubicchi works, and Fujimori Shingo as the motor-mouth ore thief Scoop. Together, this star-studded cast breathe life into the characters.

The opening theme tune, “Halloween Party,” is performed by Hyde, vocalist with L’Arc-en-ciel. The song creates instant excitement, pulling audiences them into the world of the story. The closing song, for which Nishino himself wrote both words and music, is sung by Lozareena, whose distinctive vocals ensures that memories of the movie will linger on long after the closing credits.

This talented team from different fields works together to remarkable effect, visuals and sound combining to lift the anime to a rare level of artistic quality.

The story might appear to be a fairytale for children, but in fact it contains surprising depths. The author’s observations on human society are skillfully interwoven into the story, both implicitly and explicitly, and the film offers a well-pitched critique of contemporary society, at times reminiscent of the Charlie Chaplin classic Modern Times. Another interesting concept is the film’s “L,” or money that “goes off,” which Nishino says was inspired by Michael Ende and his reading of The Natural Economic Order by the German-Argentinian economist Silvio Gesell.

And the relationship between the lonely Lubicchi and Poupelle is not just a simple feel-good story of sweetness and light. At one stage, a misunderstanding threatens to end their friendship. Poupelle is shunned as a heretic and troublemaker, and after this misunderstanding even Lubicchi can no longer believe what he says. They eventually overcome their misunderstanding and forge a stronger relationship than ever: a moment in the story that is likely to result in a few damp eyes. These sophisticated elements make the anime rewarding for grown-ups as well as children.

In the lyrics to the theme song, Nishino writes: “Hold on to your dreams, and they’ll laugh in your face; try to climb higher, and they’ll knock you back down.” Poupelle of Chimney Town uses fantasy and imagination to capture and critique the cynical mood of bitterness and negativity prevalent in some parts of Japanese society today.

Nishino has never been afraid to take chances. In his work as an author of children’s books and now as filmmaker, he has taken a number of unprecedented steps: making his picture books available at no cost to grow his audience, using crowdfunding to provide free books and tickets for children around the country, making his copyrighted material available more or less for free, organizing that groundbreaking solo exhibition at the Eiffel Tower, the first of its kind by a Japanese entertainer . . . the list goes on. The new anime encapsulates all of these daring, innovative moves. Nishino has frequently been on the receiving end of brickbats for his unconventional approach and the strategic approach he has taken to his career. This movie represents an astonishing—not to mention imaginative and creative—form of revenge. For his growing legions of fans, it offers a dazzling spectacle, cutting through the fog of fatalism and pessimism to reveal the radiance of the heavens beyond. 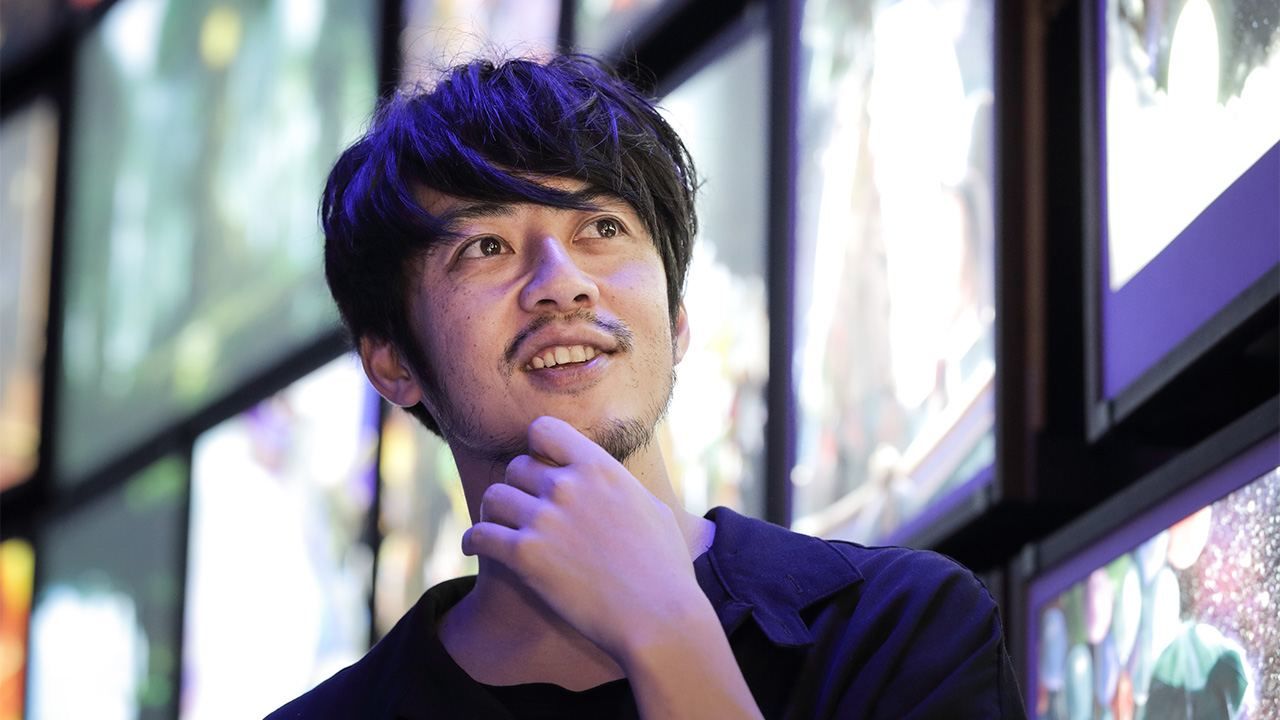 Funny man Nishino Akihiro is famous for his humor, for speaking his mind, and, more recently, for his illustrations. In autumn 2019, he held a solo exhibition at the Eiffel Tower. We met Nishino in Paris to hear about his ambitious plans to bring a new kind of entertainment to the world. 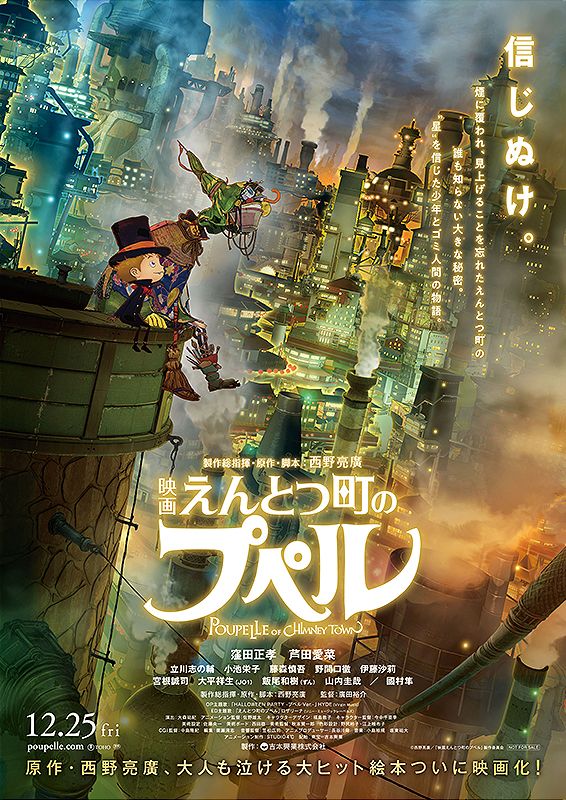 The poster for the film, which opened in Japanese theaters on Christmas Day last year. (© Nishino Akihiro/Entotsu-machi no Puperu Production Committee)