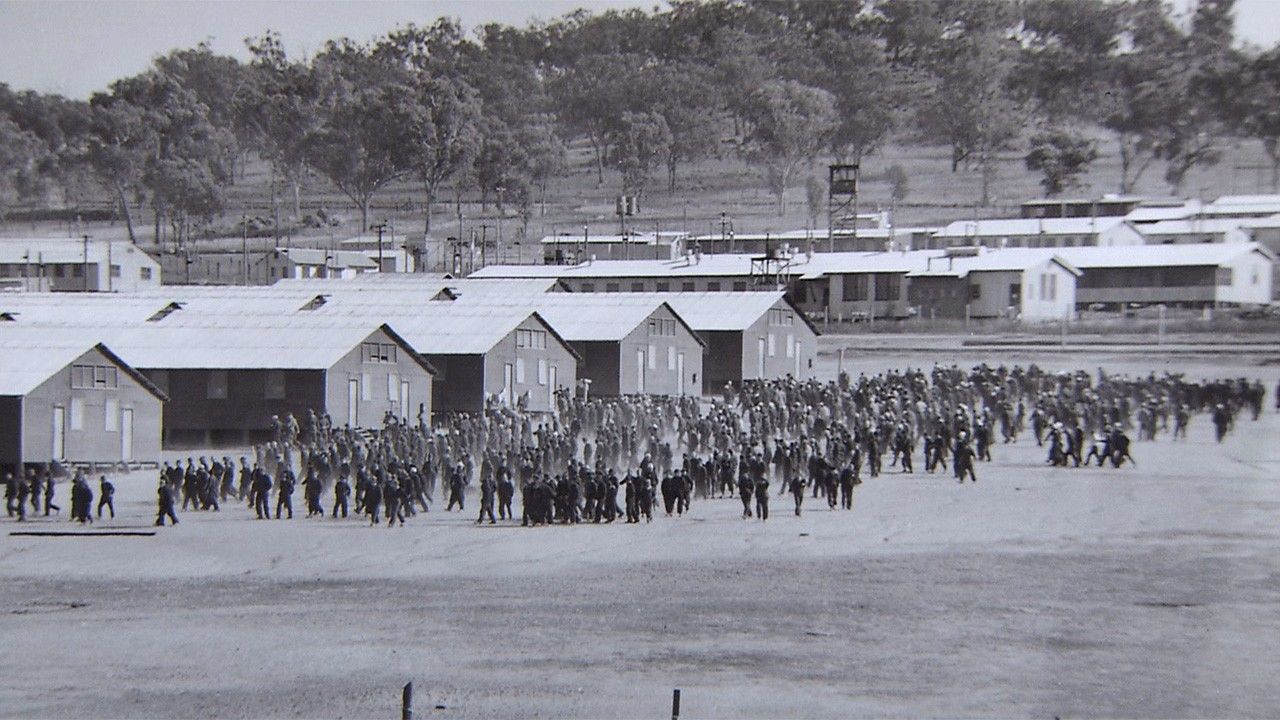 Cinema History Sep 15, 2021
In August 1944, over 1,100 Japanese POWs launched an escape from their prison camp in Cowra, Australia. It was the largest escape attempt in modern military history, resulting in 234 deaths. What drove them to such recklessness? We spoke to film director Mitsuda Yasuhiro, who interviewed the few remaining survivors to better understand their motives, which he believes provides a lesson for us today. 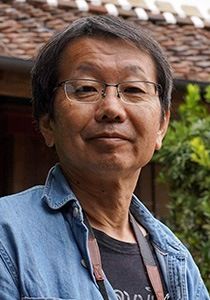 Born in 1961 in Kagawa Prefecture. Studied at Kyoto University before joining Takamatsu-based Setonaikai Broadcasting Corporation in 1984. Producer of news and other programs, including many episodes of the documentary series Terementarī for All-Nippon News Network. In 2003, he received an award of excellence from the Japan Commercial Broadcasters Association for his documentary about eels. He interviewed and produced five documentary episodes about Nagase Takashi, a military interpreter during World War II who returned to the site of the Thai-Burma Railway after the war over 100 times on “missions of atonement.” In 2016, he directed a documentary about Nagase entitled Kuwaigawa ni niji o kaketa otoko (The Rainbow over the River Kwai), which won awards and was ranked by Japanese film magazine Kinema Junpō as fifth among its top 10 cultural films.

An Airman Believed Dead Was Alive 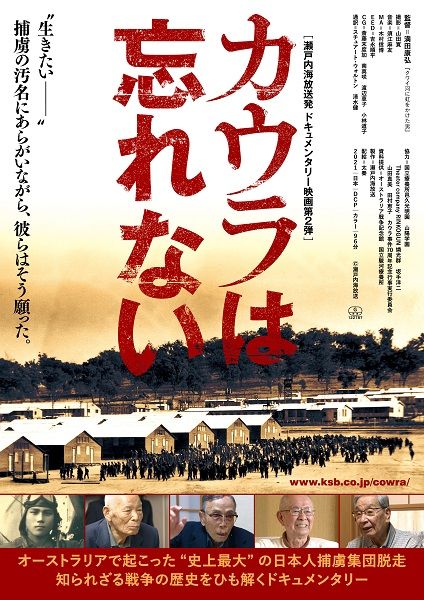 In the town of Cowra, 250 kilometers west of Sydney, Australia, is the Japanese War Cemetery, where 524 Japanese casualties of war are buried. One of the deceased is listed as Minami Tadao, but a joint Japanese-Australian survey in the 1980s discovered he was actually naval airman Toyoshima Hajime.

Toyoshima was thought to have died in an air raid on Port Darwin, but he actually survived a crash landing on nearby Melville Island. After his capture he was sent to a prisoner-of-war camp. The military code of the Imperial Japanese Army directed: “Never live to suffer shame as a prisoner.” Capture was the ultimate taboo, and consequently, prisoners were often reported as dead and went by assumed names during their internment.

The cemetery in Cowra is close to where the POW camp was located. It was the scene of the largest prison breakout in modern military history, when 1,104 POWs attempted to escape. Their aim was not to live longer, but to get shot and killed by guards. Toyoshima was one of the 234 men who perished. The remainder were recaptured and transferred to two other camps, where they stayed until their repatriation in February–March 1946, after the war. 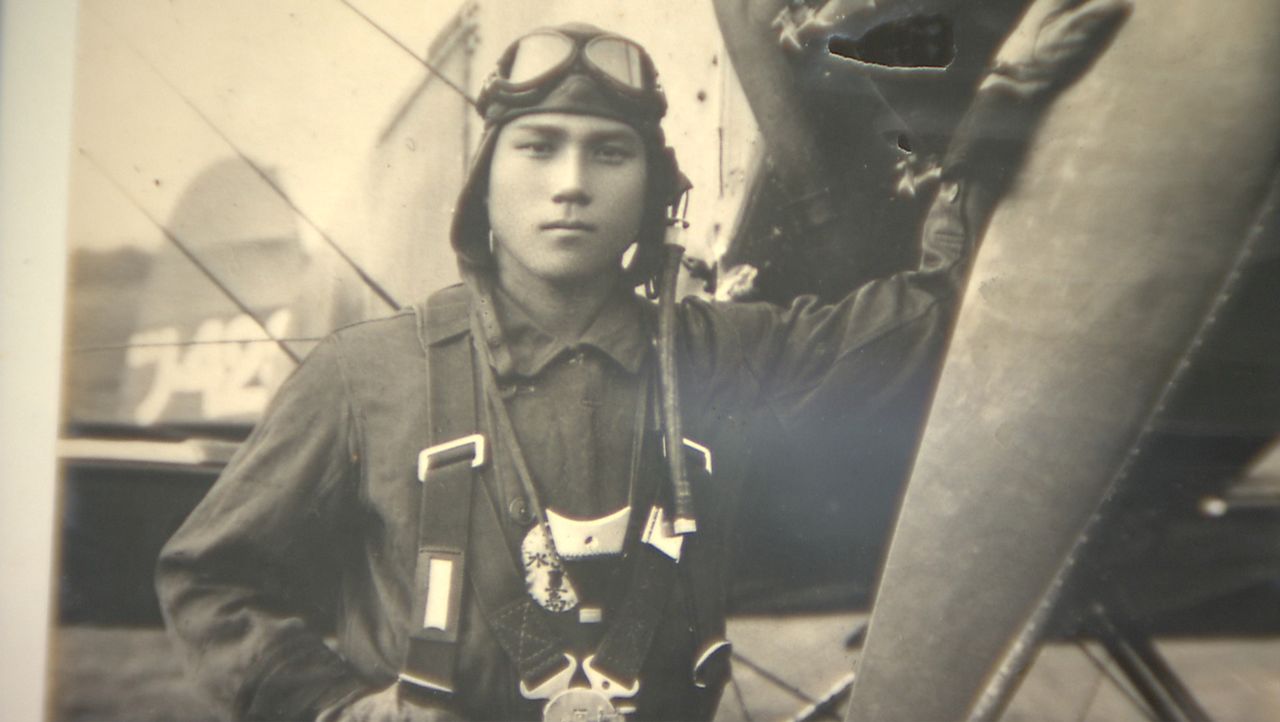 The POW Issue is a Two-sided Coin

A new documentary film by Mitsuda Yasuhiro, Kaura wa wasurenai (Cowra Will Never Forget), uses material from three previous television documentaries. It features interviews with survivors, who express their lingering remorse, young Japanese trying to understand these sentiments, and residents of Cowra, who have learned the lessons of the incident and are working for reconciliation. It is Mitsuda’s second film, after his 2016 Kuwaigawa ni niji o kaketa otoko (The Rainbow over the River Kwai). 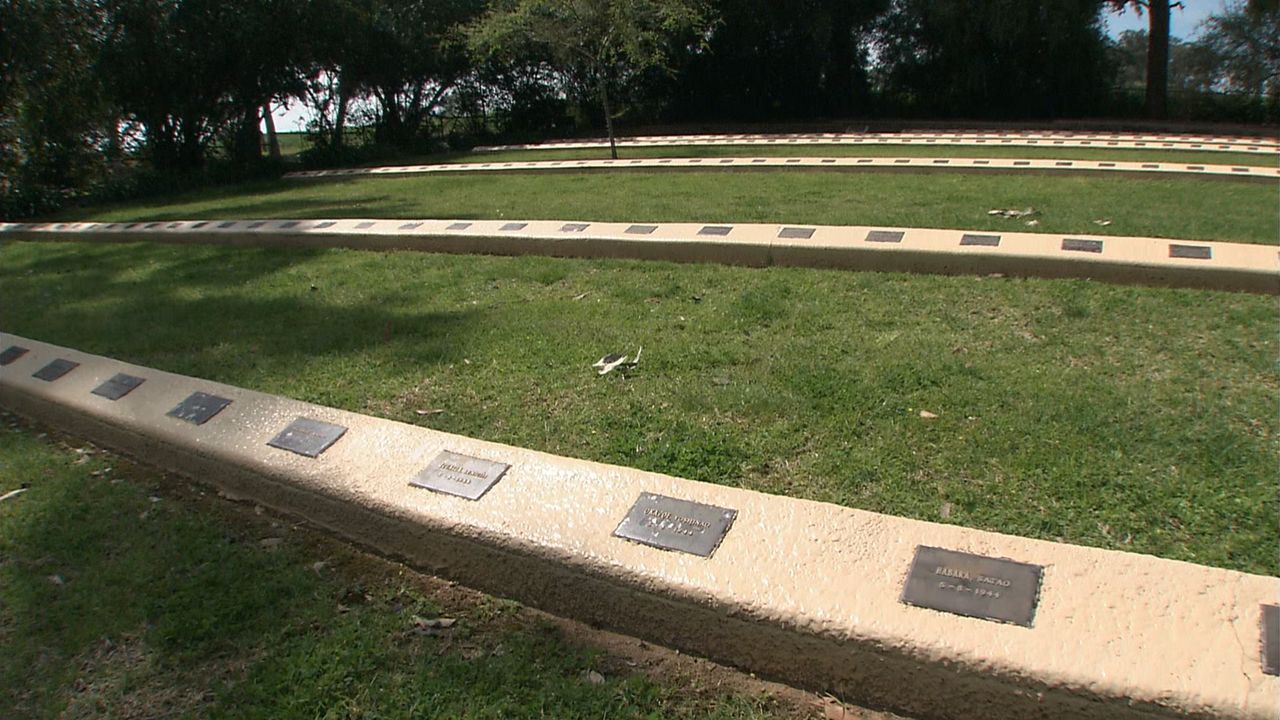 Cowra’s Japanese War Cemetery: the resting place of POWs and other Japanese detainees, together with fallen pilots. (© Setonaikai Broadcasting Corporation)

This earlier documentary, filmed over 20 years, traced the life of Nagase Takashi, a former military interpreter during the construction of the Thai-Burma Railway. The railway was built under the direction of the Japanese Imperial Army to facilitate the import of resources for the war. The project began in June 1942 and was completed in just 15 months, through the exploitation of Allied POWs and laborers from neighboring countries. Nagase’s regret at the deplorable behavior of Japan’s army spurred him to undertake activities for atonement and reconciliation, funded with his own money and donations.

“The construction of the Thai-Burma Railway and the Cowra breakout are two sides of the Japanese POW coin,” says Mitsuda. “Throughout the war, Japanese soldiers were taught that imprisonment was shameful—it was preferable to die. This contempt for prisoners resulted in abuse of Allied POWs as well as the doomed escape from Cowra. The Japanese prisoners believed their own lives were worthless and that they had nowhere to return. They took part in the breakout expecting to be shot.” 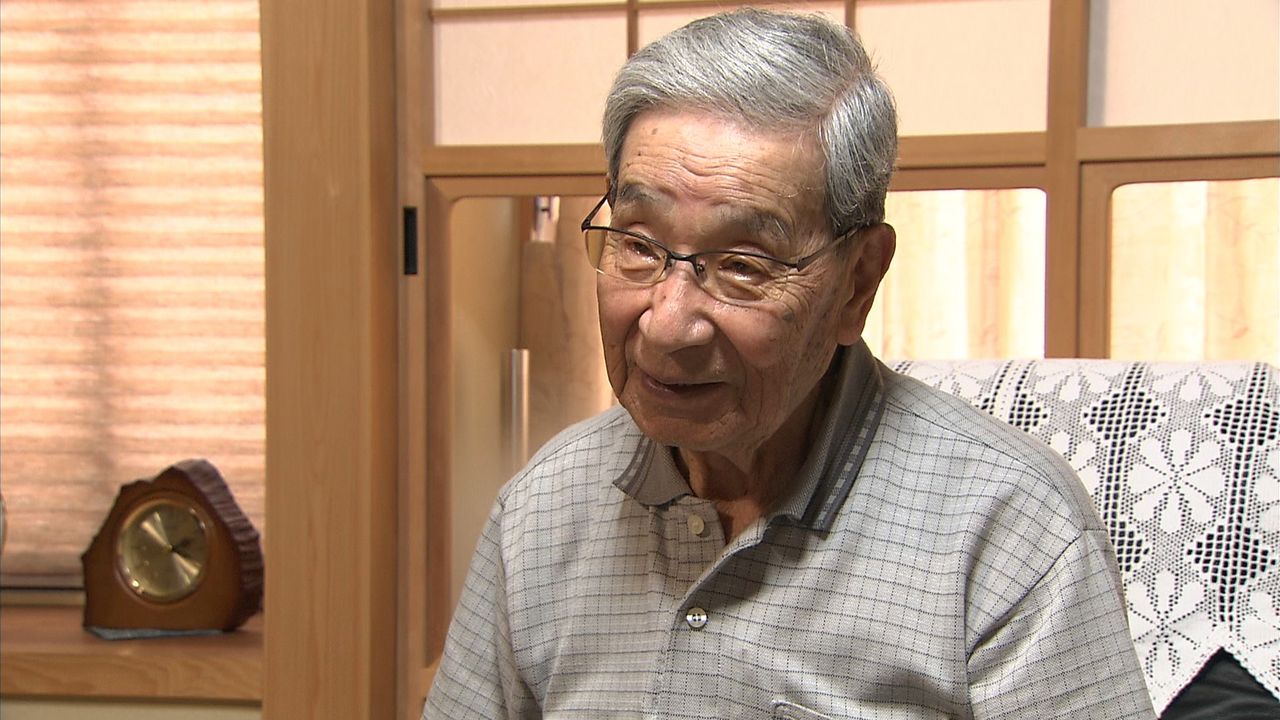 The prisoners passed the time in recreation, with homemade baseball equipment, mahjong sets, and hanafuda playing cards, but deep down, many doubted they should live so comfortably. One day, they were suddenly advised that the soldiers would be separated from the noncommissioned officers and taken to another camp to reduce crowding. The POW leaders held a meeting that night, and resolved to take action. A ballot was cast, using sheets of toilet paper. 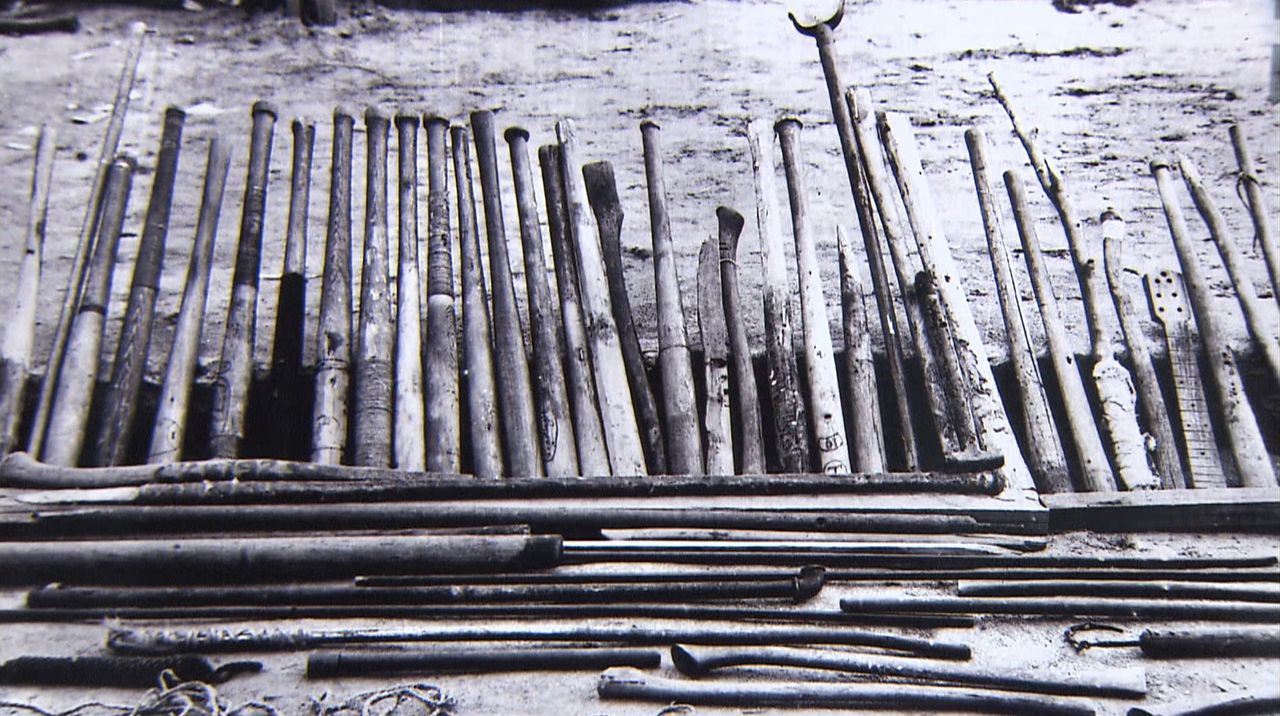 Baseball bats made by the prisoners. In the uprising, they wielded these against guards, who were armed with machine guns. (© Setonaikai Broadcasting Corporation)

Imai Yūnosuke, then a navy civilian employee, describes four sentiments held by the POWs. Some had a fierce militaristic spirit, and were determined to die. Others shared this militaristic ethos and were willing to die, but believed it was not the right time. Still others wanted to live, but would not say it openly. The fourth group opposed the uprising. He explains that many men voted “yes” even though they did not want the escape to proceed. 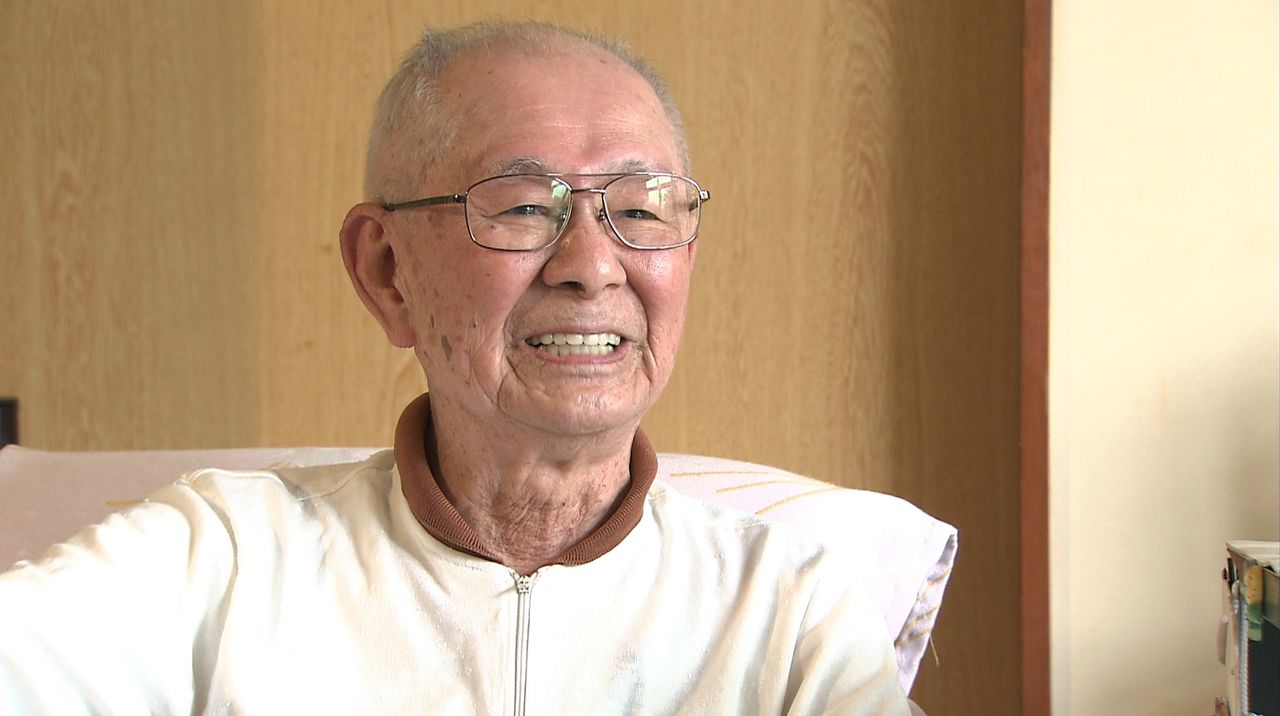 After demobilization, Imai Yūnosuke (1920–2018) worked for many years at the Ministry of International Trade and Industry. (© Setonaikai Broadcasting Corporation)

The ballot result was in favor of an escape attempt, and the POWs launched it the night before they were scheduled to be transferred. Imai was not in the army and was unfamiliar with the military code, but still resolved to die, and charged ahead at the sound of the bugle. He says he survived because guards initially only fired overhead warning shots. It was the men who followed who lost their lives in direct fire. Incidentally, Toyoshima, the naval pilot and a POW leader, was the man who sounded the bugle. 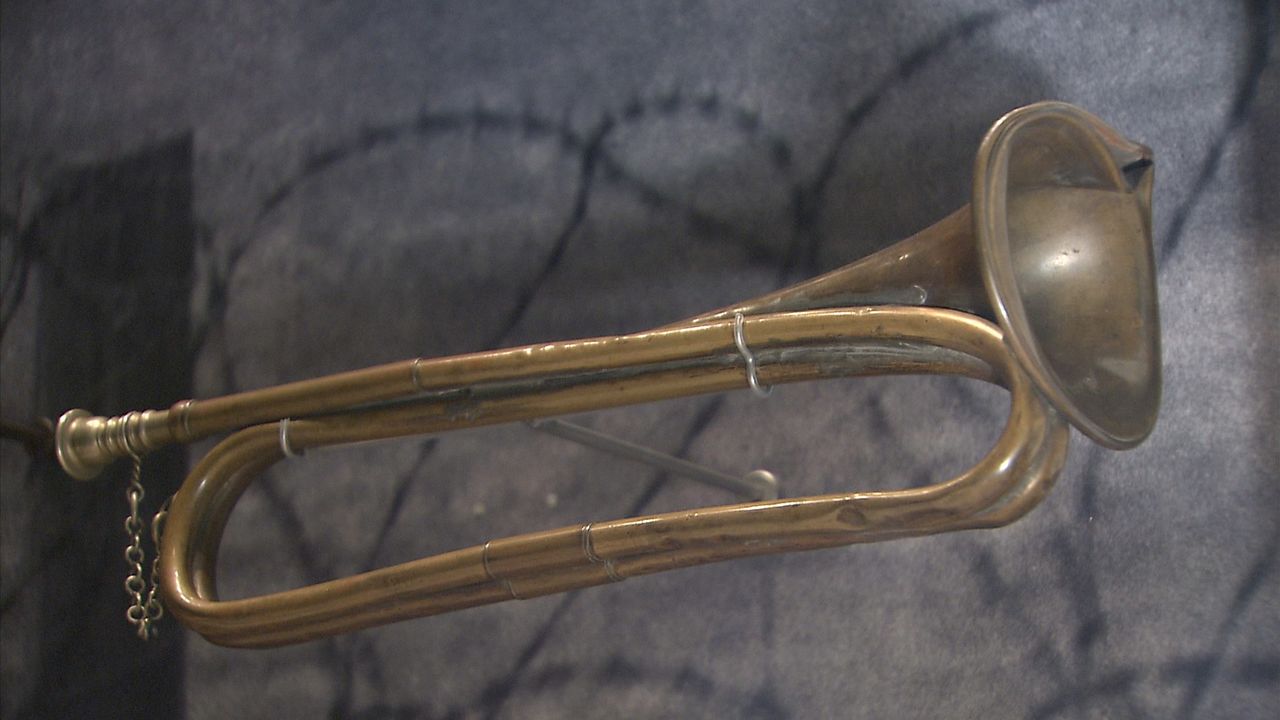 The bugle used by Toyoshima to signal the charge. (© Setonaikai Broadcasting Corporation)

Mitsuda explains: “They believed they would become heroes by dying, but merely ordinary men if they survived. That’s why the survivors spoke honestly, and with humanity. Three-quarters of them have already passed away. I was so grateful to those I interviewed that they spoke so candidly. I started interviewing them in 2009, but I wish I’d started much earlier, because so many were already dead. I worried that there weren’t enough survivors to make a film. But on the other hand, I believe they spoke more openly precisely because so many of their comrades are no longer with us.”

One interviewee, Tachibana Seiichirō, was radically different from the daring Toyoshima, and from all three other interviewees. He suffered from Hansen’s disease, and was isolated in his own tent in the POW camp. He was not even aware of the escape plan. 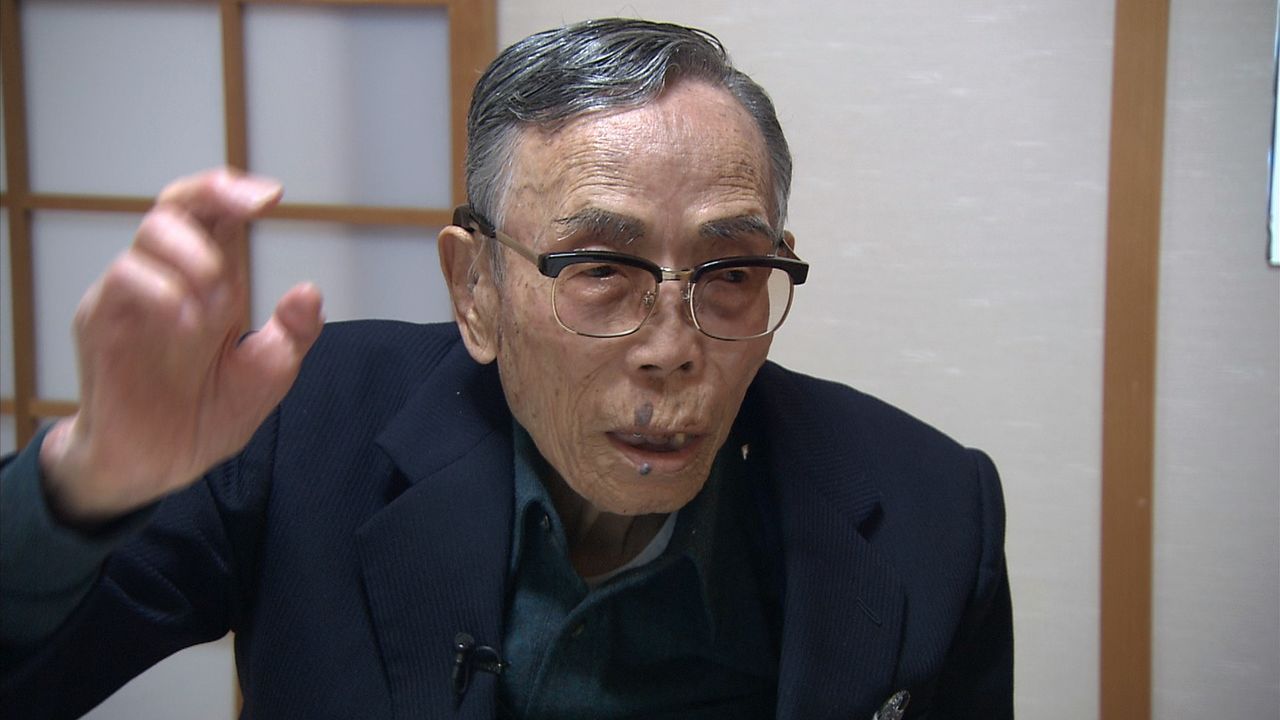 After demobilization and repatriation, Tachibana was placed in Oku-Kōmyō-En Sanatorium, on the island of Nagashima in Okayama Prefecture, where he worked as a barber. After he gained his driver’s license, he drove fellow patients around.

“Mr. Tachibana lived with regret for those who perished, but he accepted his own fate, and strived to live sincerely. He seemed very noble to me. When I ask myself what constitutes a truly strong person, Mr. Tachibana comes to mind over those who fought and died gloriously.”

Airman Toyoshima used an assumed name after capture to preserve his family’s reputation, so that people would believe Toyoshima Hajime had died honorably. But Tachibana used a false name to shield his family from prejudice against POWs and against his ailment. Another major difference for Tachibana was that he did not consider it a pseudonym—he resolved to live under this new name.

Lessons for Now and the Future 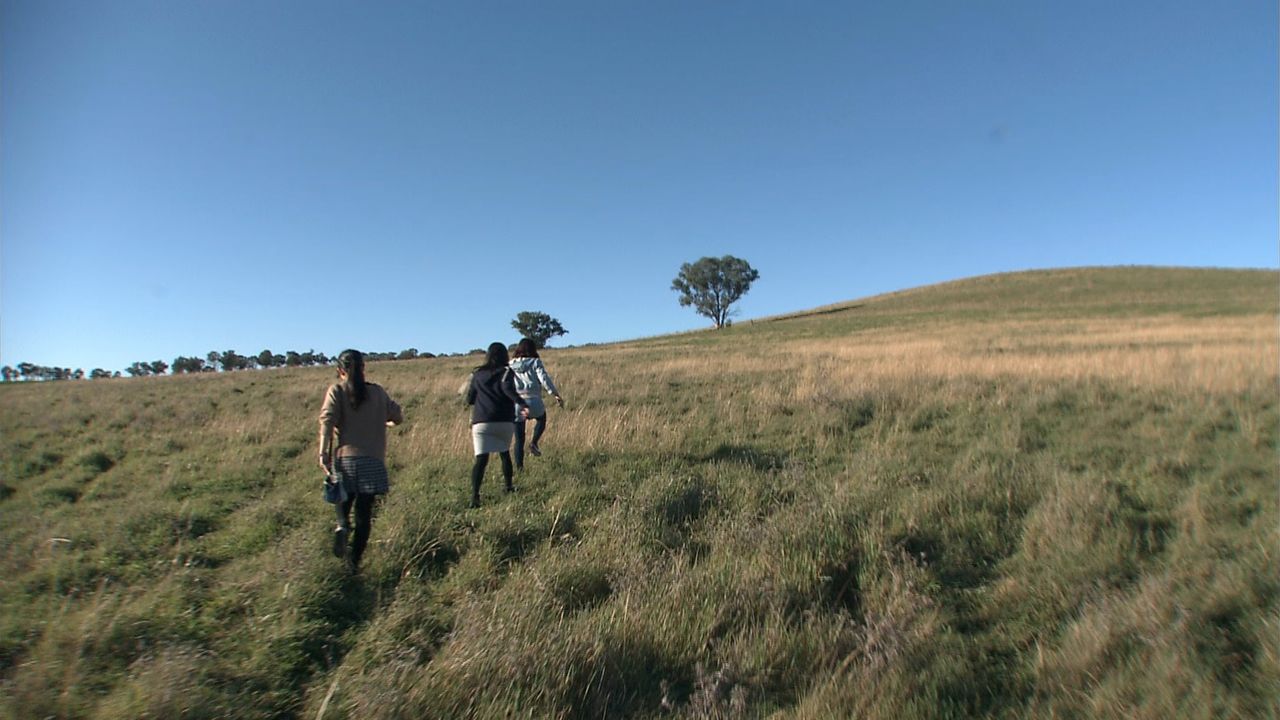 Japanese high school students with the eucalyptus tree that was Tachibana’s sole companion at the camp. (© Setonaikai Broadcasting Corporation)

The film includes footage of students and graduates of San’yō Girls’ High School (now San’yō Gakuen), in the city of Okayama, meeting with Tachibana. In 2014, they visited Cowra for the seventieth anniversary of the breakout in place of Tachibana, who could not go due to health reasons.

Theatrical group Rinkōgun performed at the seventieth anniversary event, incorporating Australian actors. The audience reaction was astonishing. After the performance, many men involved in the incident came forward to meet the troupe. It is easy to appreciate how such a place still vividly conveys the memories of the breakout, even after 70 years. 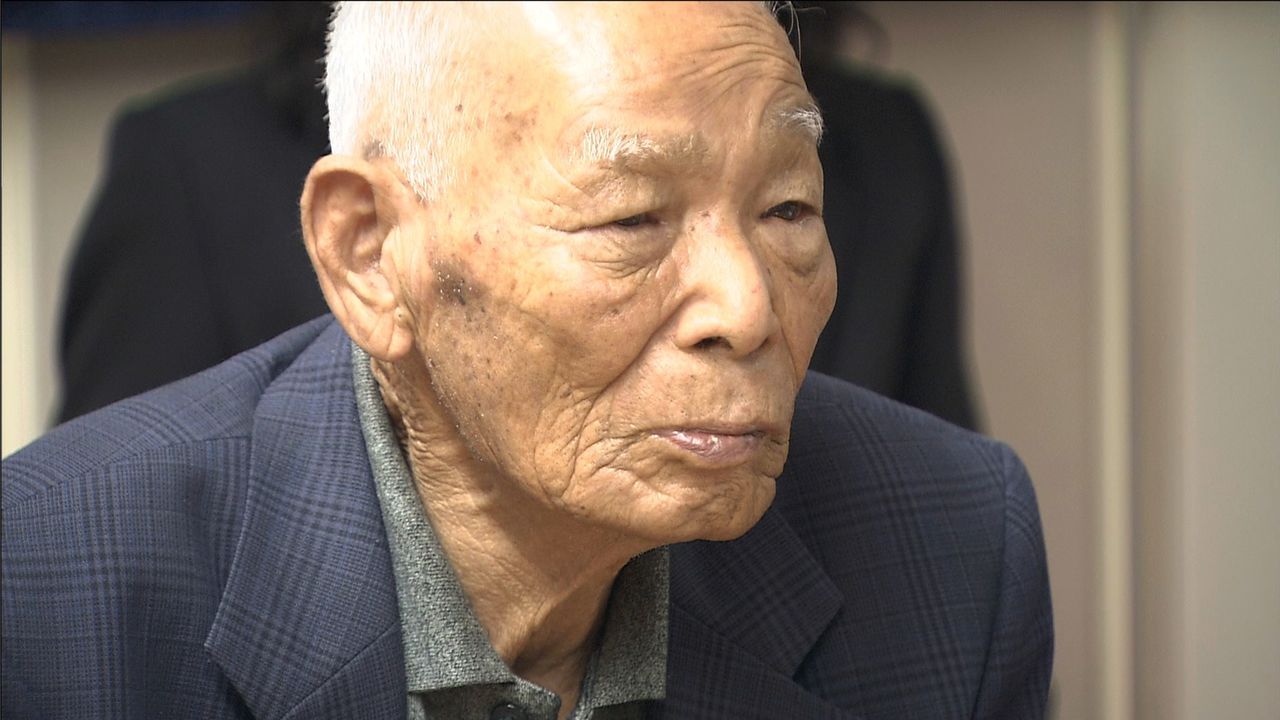 Murakami was the only survivor at the events. At a gathering held at Cowra High School, someone asked him why he continued to pray for his former colleagues. He declined to answer this question, but the silence weighed heavily upon everyone.

“Of the four, Mr. Murakami is the only one still alive today. Last year he turned 100. It feels like he is finally opening up, having realized he doesn’t have many years left to live. But still, there are things he cannot express verbally. As years pass, it provides opportunity for reflection, but it’s a complex story to discuss. If I’d been in that situation, under that pressure, I can’t say for sure that I would have opposed it.” 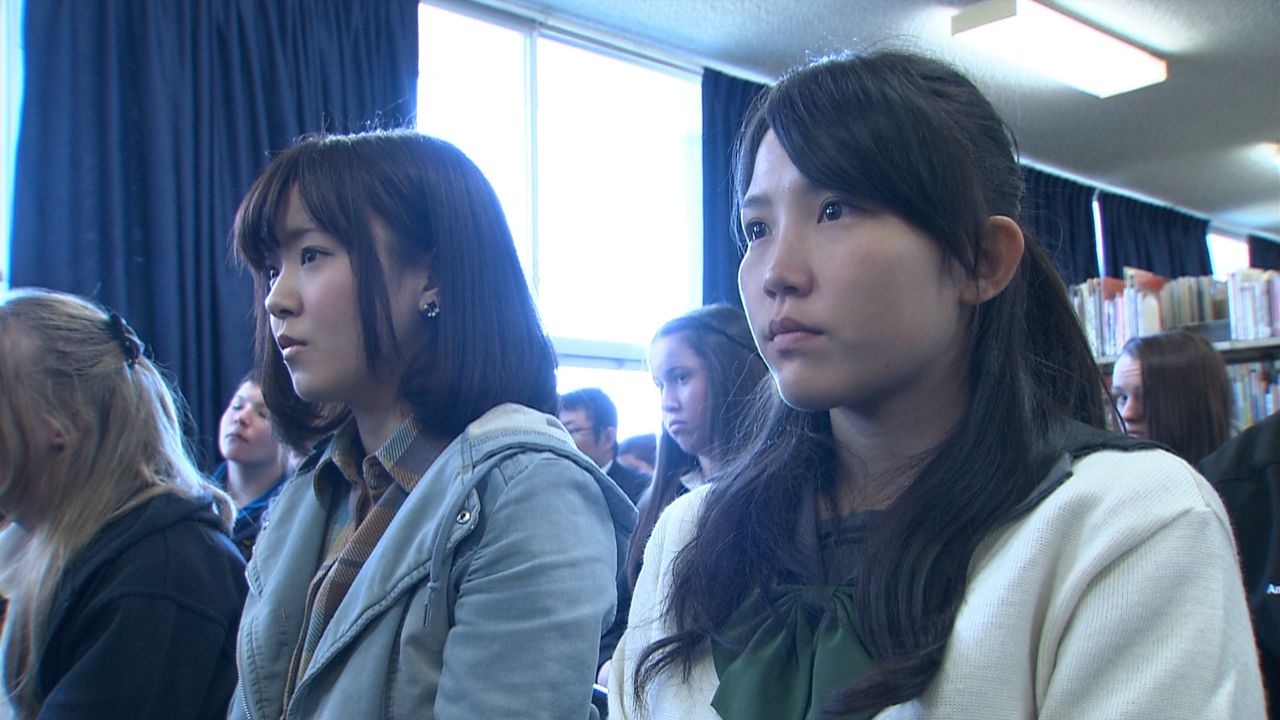 Director Mitsuda Yasuhiro attempted to represent the incident from multiple angles, focusing on survivors, but also interviewing researchers, Cowra residents, members of the drama troupe, and high school students. The key theme that emerged was postwar reconciliation, but he had reservations about creating a film that was heartwarming.

“The people of Cowra seemed very positive,” he notes, “learning from history and applying this to the future. It made a deep impression on me, but I wasn’t sure it was appropriate to focus on that. The first edit of the film just didn’t feel right. The Cowra incident has an important lesson to teach Japanese people. In Japan, we have ‘public life’ but not a true ‘society.’ Public life exists in the connections between people, but Japan is not a society composed of independent individuals. This has become evident in recent political events and the public’s reaction: systematic falsification of official documents, the COVID-19 response, the staging of the Olympic Games. Japan has democratized, but it’s hard to feel proud with the current state of affairs.” 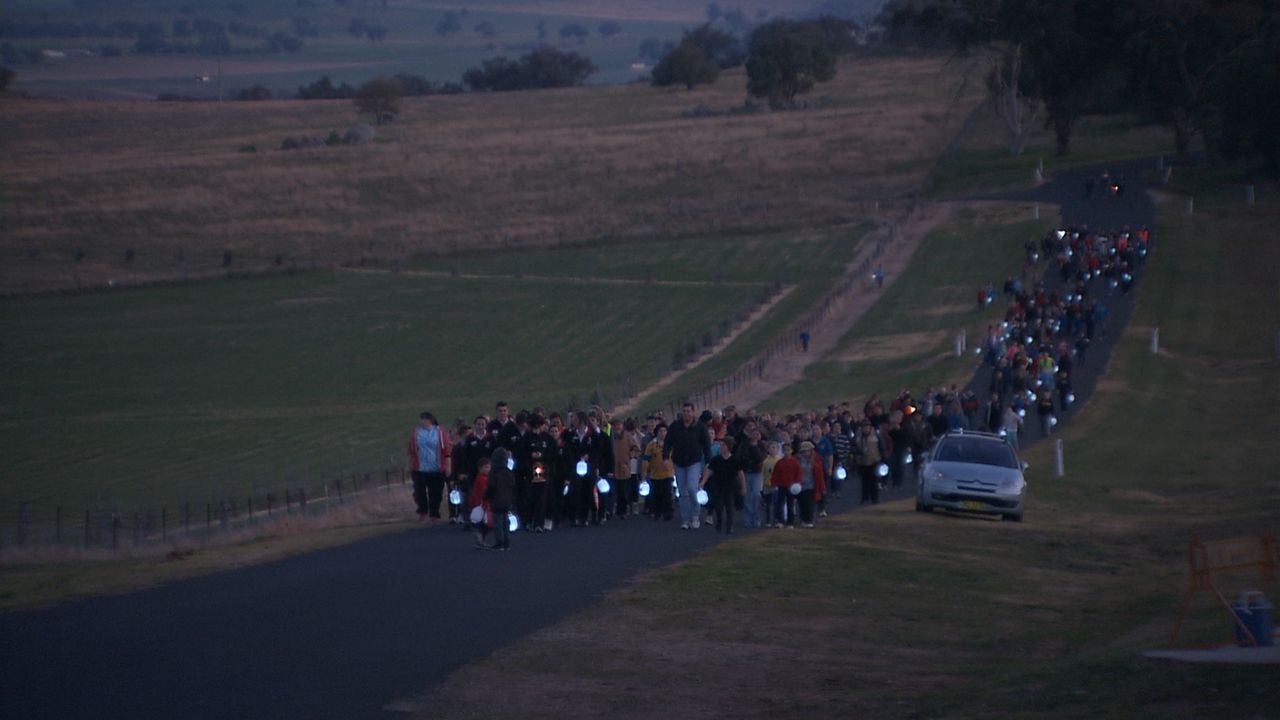 Four Australian guards were killed in the breakout. In 2014 Cowra residents took part in a “lantern walk” to remember the dead and pray for peace. (© Setonaikai Broadcasting Corporation)

The pandemic has revealed disdain for human life and a society brimming with discrimination. Suicide is prevalent. According to Mitsuda, it is even more reason why we should reflect on what happened at Cowra and share the story.

“What can people today take from this film personally? I felt it was appropriate to provide materials for self-reflection, and I adapted the structure accordingly. It’s often said that Japanese people buckle to peer pressure, so it may seem futile to point it out. But I’m happy if my film can be a cue to help people stop and consider things.”

When he was at university, Mitsuda was struck by something a lecturer from France asked in their final lesson together: “Why do Japanese people obey red pedestrian lights even when there’s no car in sight?”

Mitsuda recalls that provocative question. “As a country boy studying in the big city, it was such a liberating idea. I remember when I left that class, the blue sky looked so vast. I hope the film speaks to people who feel they can’t say how they really feel in small groups they belong to: their class at school, their company, their group of neighborhood mom friends, or whatever. To people who resent being dragged along by the strongest in the group or by peer pressure. Instead of feeling penned in by social structures, I want people to realize that they can break free.” 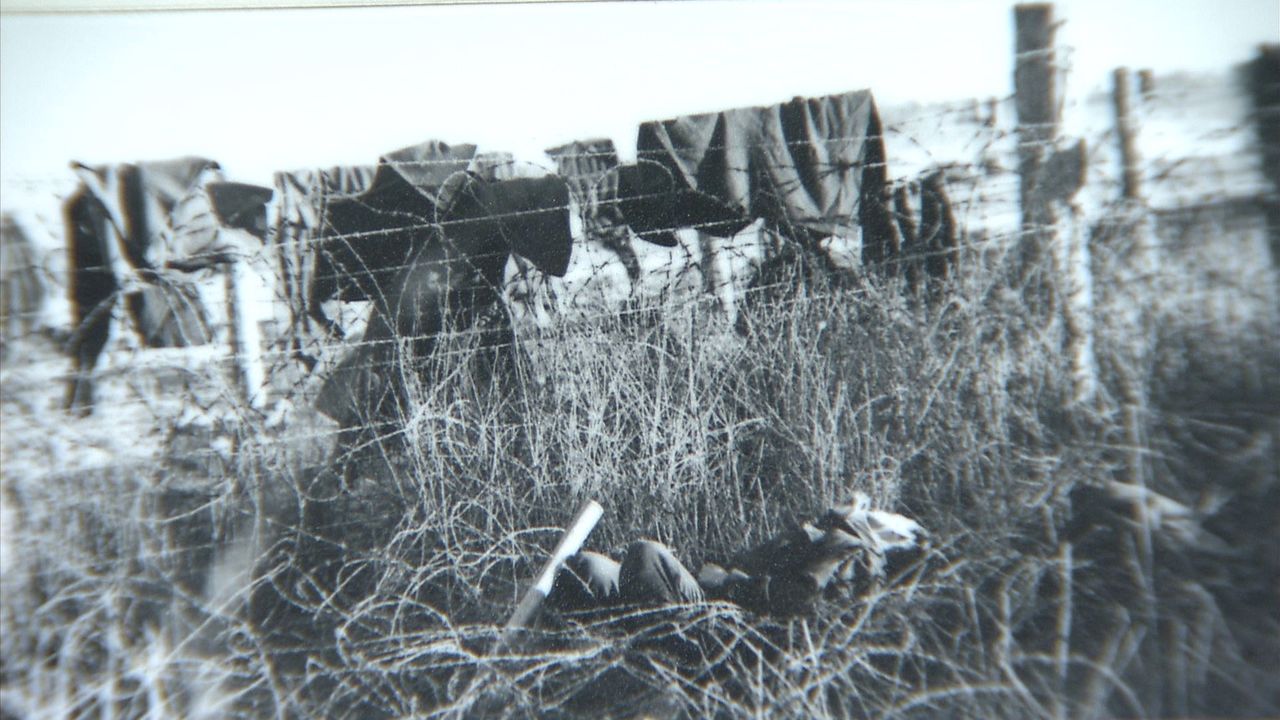