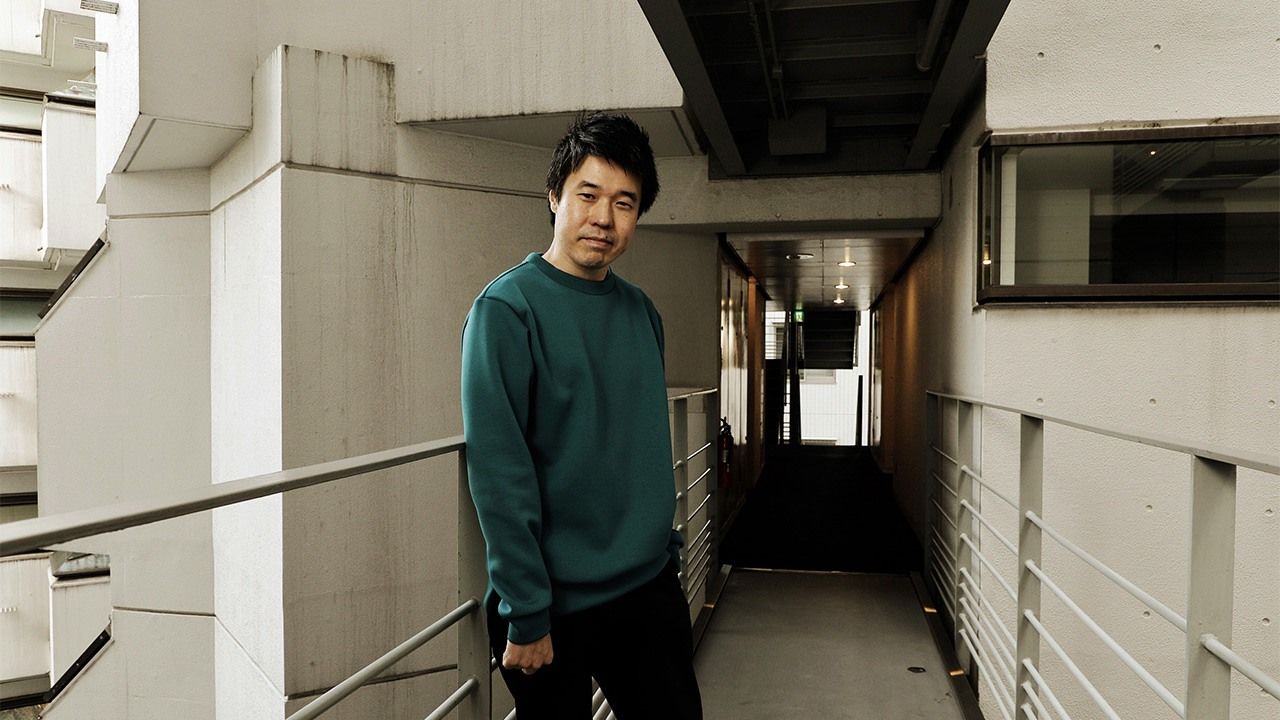 Cinema Mar 25, 2022
Director Kaneko Masakazu’s Ring Wandering weaves together a hunt for the long-extinct Japanese wolf with the distant memories of war that lie dormant beneath the streets of Tokyo. 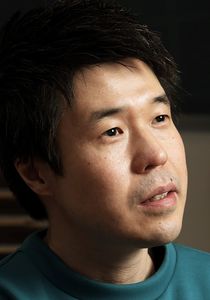 Born in Tokyo in 1978. Began shooting on 8mm and 16mm film while studying at Aoyama Gakuin University. After graduation, worked in a used bookstore while studying under director Zeze Takahisa at The Film School of Tokyo, with graduation project Sumire Ningyō (A Doll Named Sumire) (2007) screened at events including Japan Film Fest Hamburg 2012. Later worked on advertising, corporate video, and film sets, while directing a series of six short films. Made feature debut in 2016 with The Albino’s Trees, which was screened in the new director category at Beijing International Film Festival 2016, also winning Best Feature, Best Direction, and Best Picture at Figueira Film Art 2017 in Portugal and earning a further 20 prizes, including 9 for best feature, at 20 film festivals in 15 countries worldwide. Kaneko’s second feature film Ring Wandering (2021) has received best picture at the International Film Festival of India 2021. In FY 2021, Kaneko became one of three directors selected by Japan’s Agency for Cultural Affairs for an initiative designed to support the participation of Japanese cinema in overseas film festivals.

Nature, Wildlife, and Memories Locked Within the Land

In his youth, as both a keen drawer and an avid reader, Kaneko Masakazu’s earliest aspirations leaned towards becoming a manga artist or an illustrator. But in his late teens, having recognized that there were (in his own words) “stacks of people who could draw better than me,” he swapped his pen for a camera, and found his true calling. 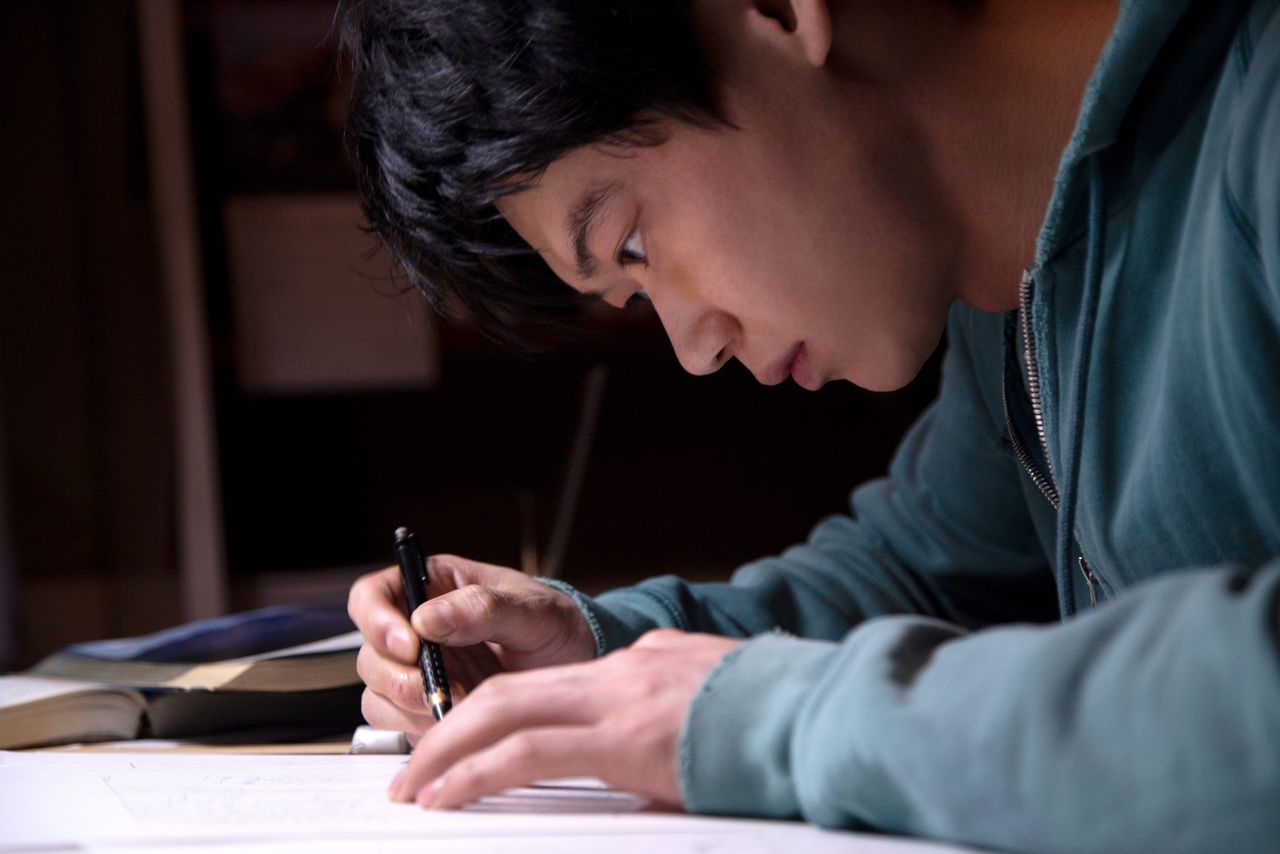 “I realized that film was a medium in which I could truly express myself,” he remembers. “I was a complete novice when it came to cameras. But after a year or so I got the hang of it, and I immersed myself in the expressive possibilities of film. At first, I dabbled mainly in abstract shorts, but after a number of works, wildlife and nature established themselves as a central theme.”

Following early shorts depicting a serow antelope and wild boar, Kaneko’s debut feature The Albino’s Trees explored modern society’s complex relationship with nature through the tale of a young woodland animal control officer whose work puts him face to face with a sacred white deer. And the director sees his latest work Ring Wandering as the fourth in a series devoted to animals, with the extinct Japanese wolf emerging as a central motif in the manga drawn by the film’s main protagonist. 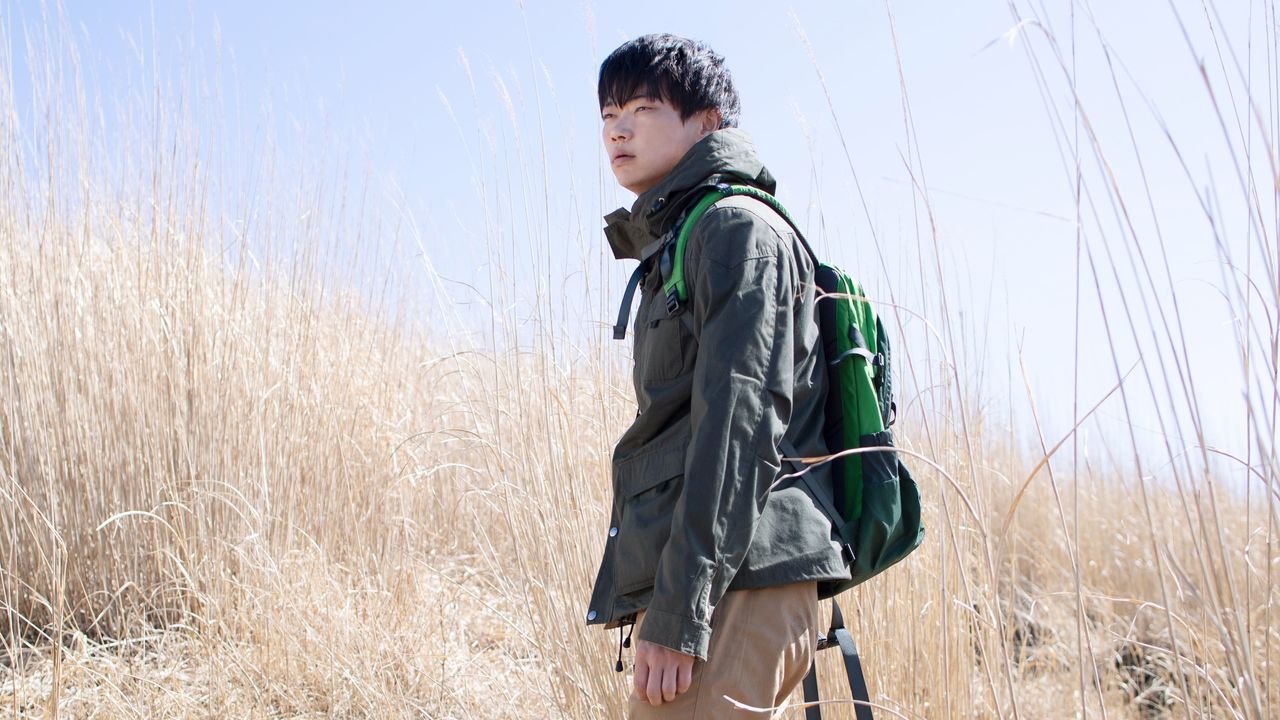 In the film. Sōsuke sets out in search of traces of the extinct Japanese wolf. (© 2021 Ring Wandering Committee)

As a predator of the animals that destroyed their crops, historically Japanese farmers saw this indigenous canid as a trusted ally. And at numerous shrines across the country, including Musashi-Mitake Shrine in Western Tokyo’s Okutama region, and Mitsumine Shrine in Chichibu, Saitama Prefecture, the wolf is venerated—sometimes as a familiar of the gods, and sometimes as a god in its own right.

“Alongside the idea of animals as a bridge between the natural world and humanity, another key theme for me is the intrinsic memories locked within specific locations. Placing the Japanese wolf—which sadly went extinct despite once having sat at the ecological apex—at the center of this story was intended to symbolize the forgotten memories held within the land itself.” 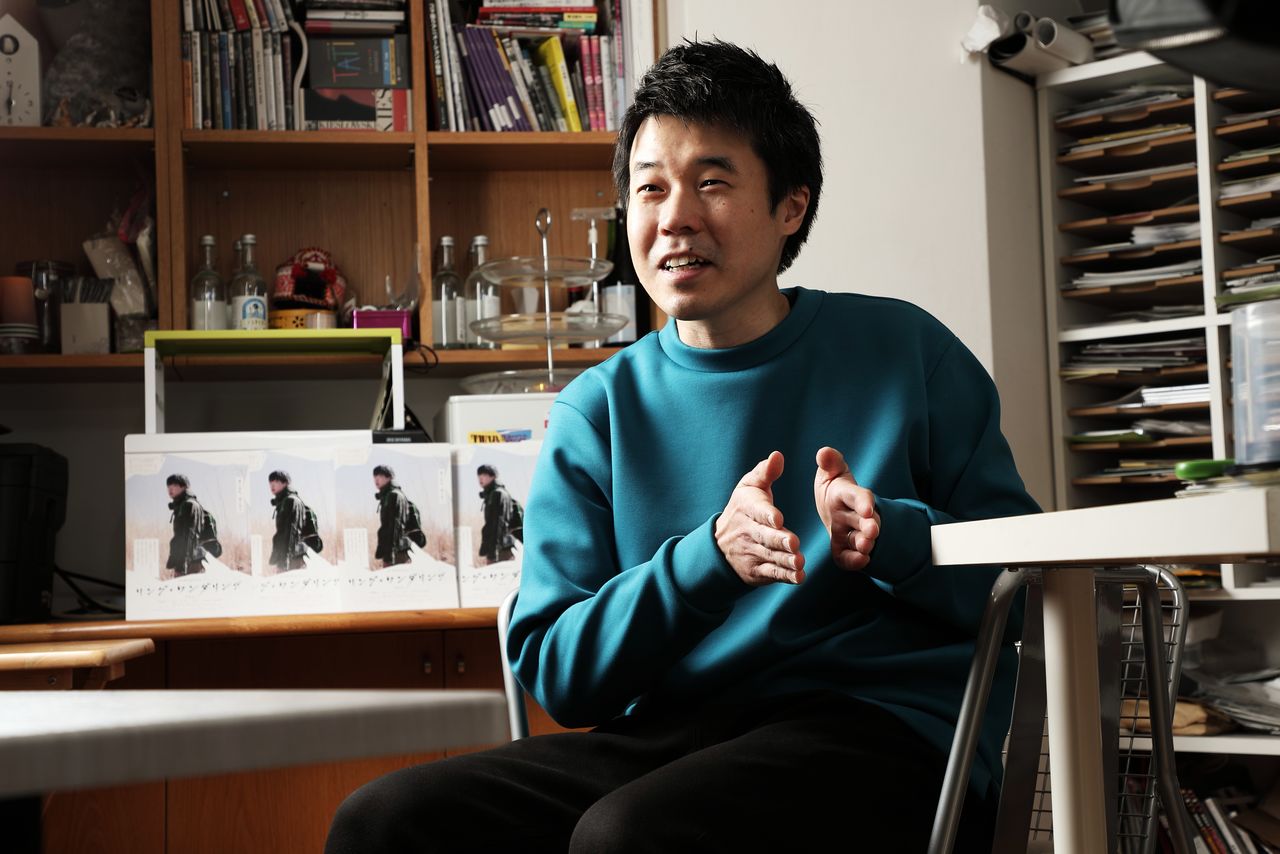 Tuning into Each Location’s Wavelength

In Ring Wandering, Kasamatsu Shō plays Sōsuke, an aspiring manga artist working on a comic about the Japanese wolf but frustrated by his inability to draw the creature satisfactorily. One night, during his part-time job on a construction site, he accidentally knocks over a young woman named Midori (played by Abe Junko). Upon escorting her home, he is introduced to her family, but the encounter soon leads him down a path to the forgotten memories locked beneath the streets of Tokyo’s historic shitamachi (downtown) district. 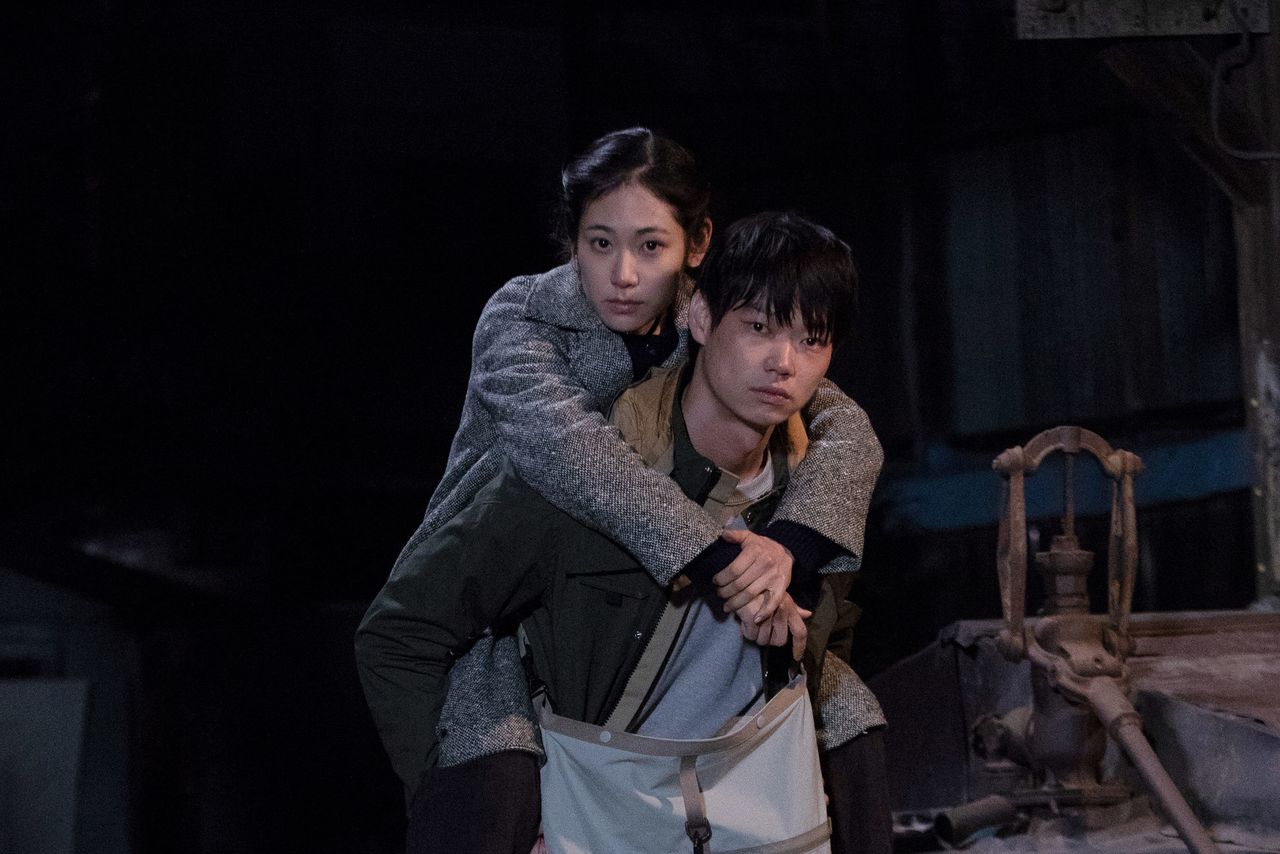 Kaneko began work on the story around 2017, as Tokyo’s streetscapes were undergoing a rapid transformation in preparation for the Tokyo 2020 Olympics. “It made me uneasy, the way things just got covered over as if there had been nothing there before,” he remembers. “But from beneath the concrete streets, wartime memories and even older histories began bubbling to the surface.”

In the story, too, Sōsuke’s imagination is piqued by a friend’s accounts of frequent discoveries of historical ruins even in the heart of Tokyo. Then, one day on the construction site, he unearths an animal skull, which gives him the idea for a story that wanders the liminal border between the present and the past. 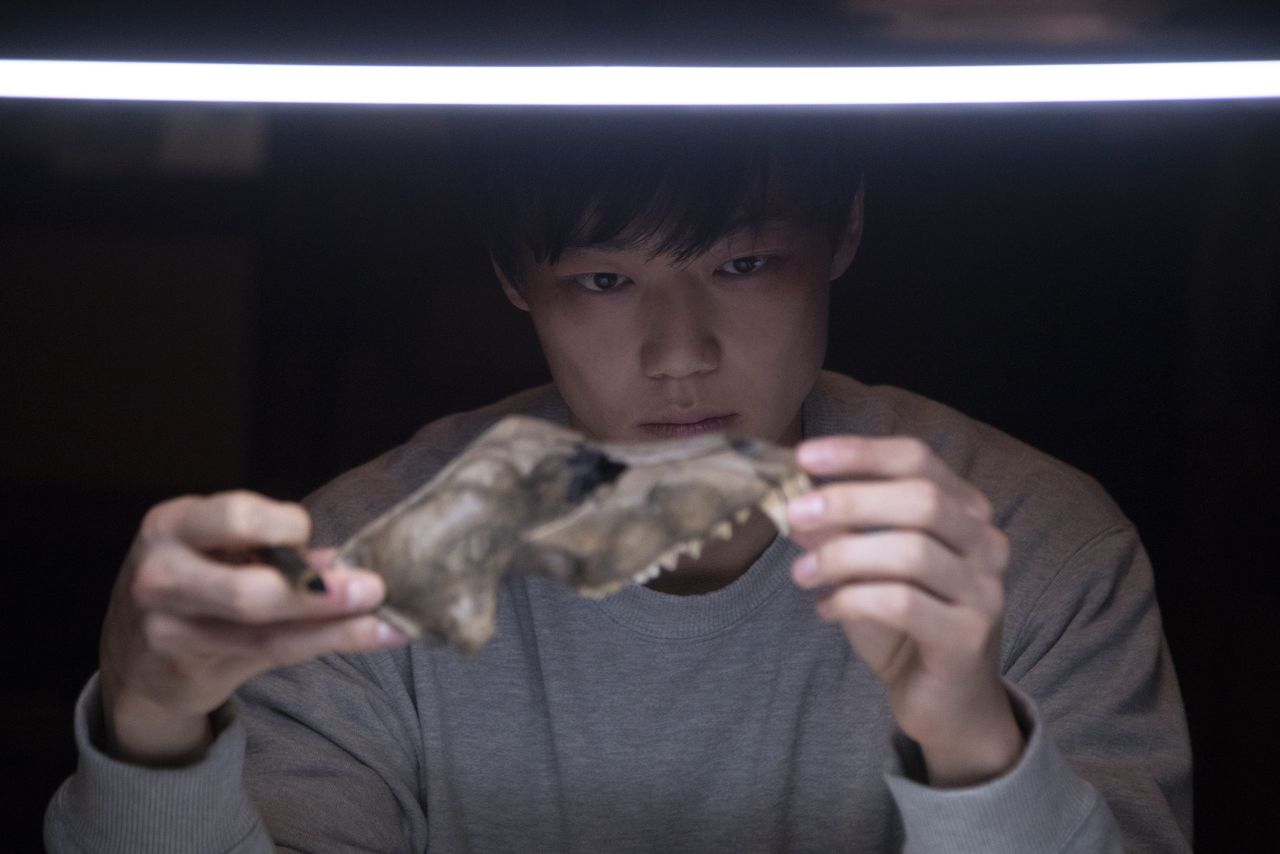 Sōsuke is amazed to unearth an animal skull from the construction site on which he works. (© 2021 Ring Wandering Committee)

Though writing about real people and places may make life easier for the author, Kaneko takes a conscious effort to surrender such certainties and plunge headlong into the realm of imagination. Location scouting for Ring Wandering did not begin until after the screenplay was completed, and because Tokyo retains so few extant traces of 1945, the historical period invoked in the story, finding the right locations was much more difficult than when filming in a natural setting. 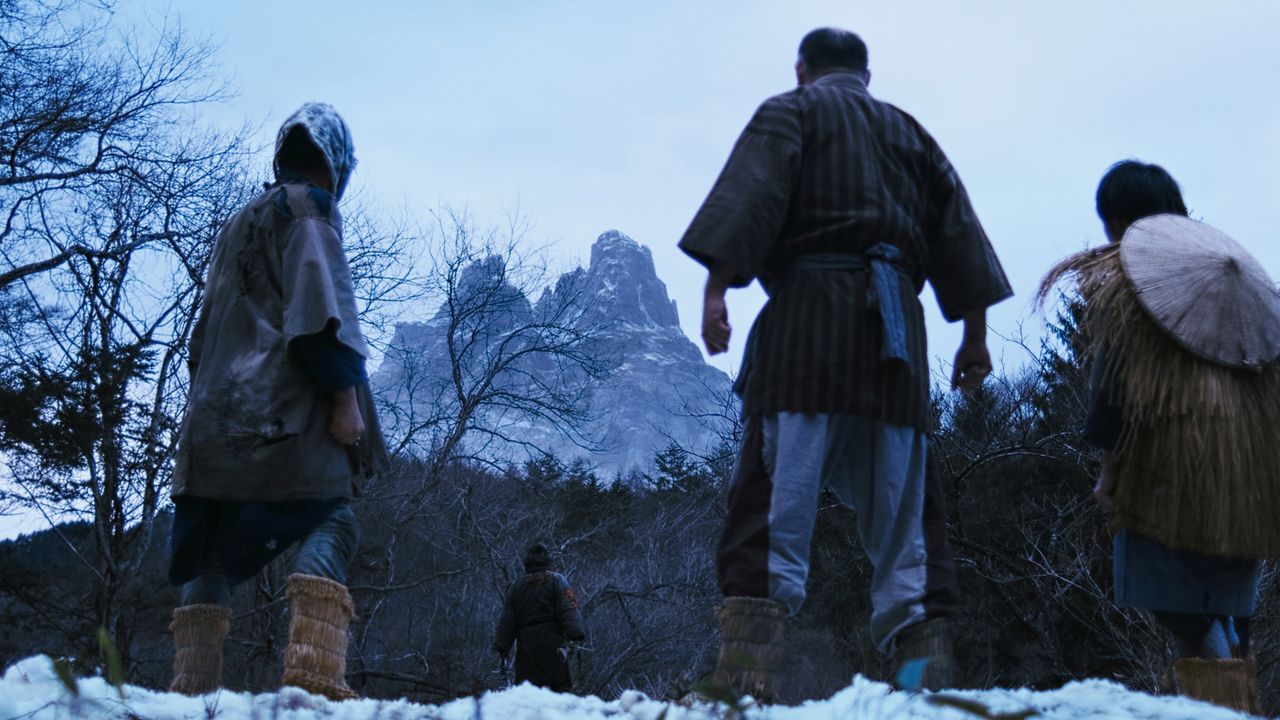 “Every location is infused with the memories of the people who have lived there,” Kaneko explains. “But that’s not something that you can just show up and capture straight away. And the locations Japan’s Film Commission promotes are very convenient, but there are often too many passersby and the aura is too faint. That’s why I always try to go out and search for the right spots myself.”

“Just like tuning a radio, you have to get yourself on the same wavelength as the specific location,” he adds. This exemplifies the ethos of a director who absorbs the power of place into his films. Perhaps it is his Tokyo roots that make him feel like he is always shooting from an outsider perspective. 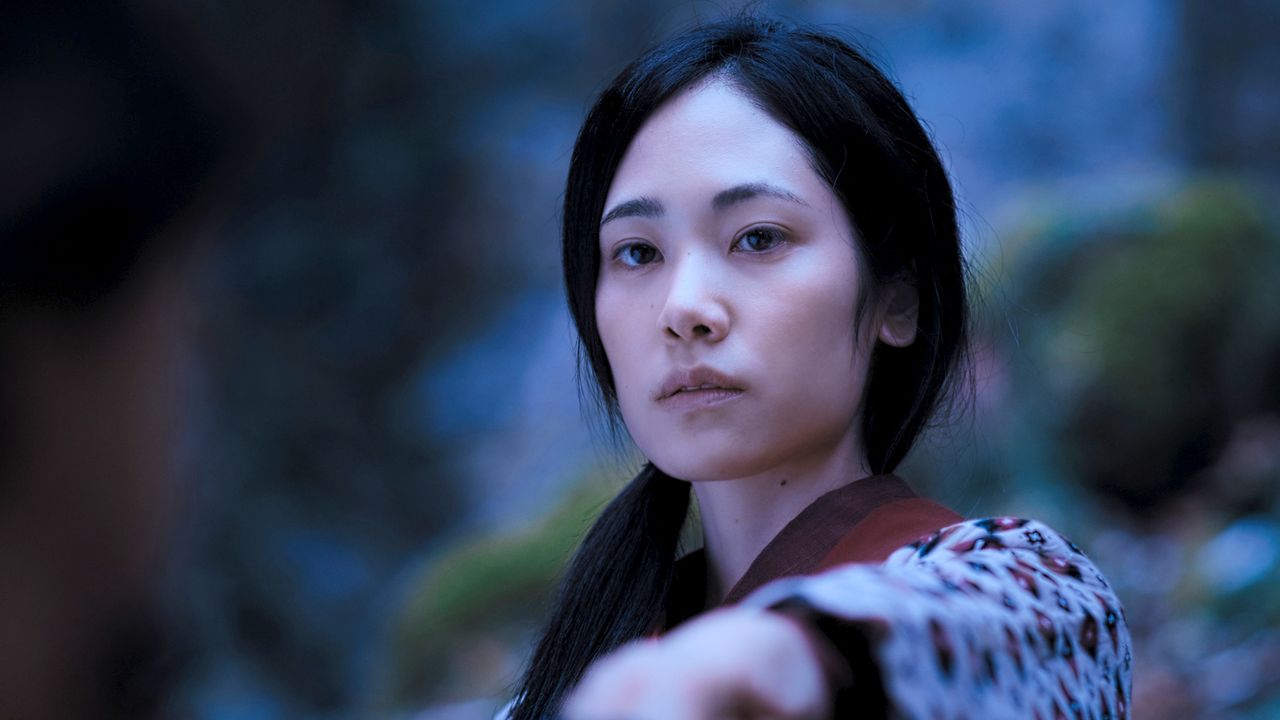 Making the Most of Serendipity

When filming out in nature, where progress is often disrupted by sudden changes in the weather, Kaneko depends on the acting skills of his cast to give shape to the image he has in his head.

The director describes how leading man Kasamatsu has a quality that reminds him of the wolf’s natural reluctance to interact with people. He’s joined by Abe—doubling up on her role as Midori, who defies the conventions of time and space to appear to Sōsuke, with a parallel portrayal of Kozue, the heroine of Sōsuke’s manga—backed up by seasoned screen veterans Yasuda Ken, Kataoka Reiko, and Hasegawa Hatsunori. 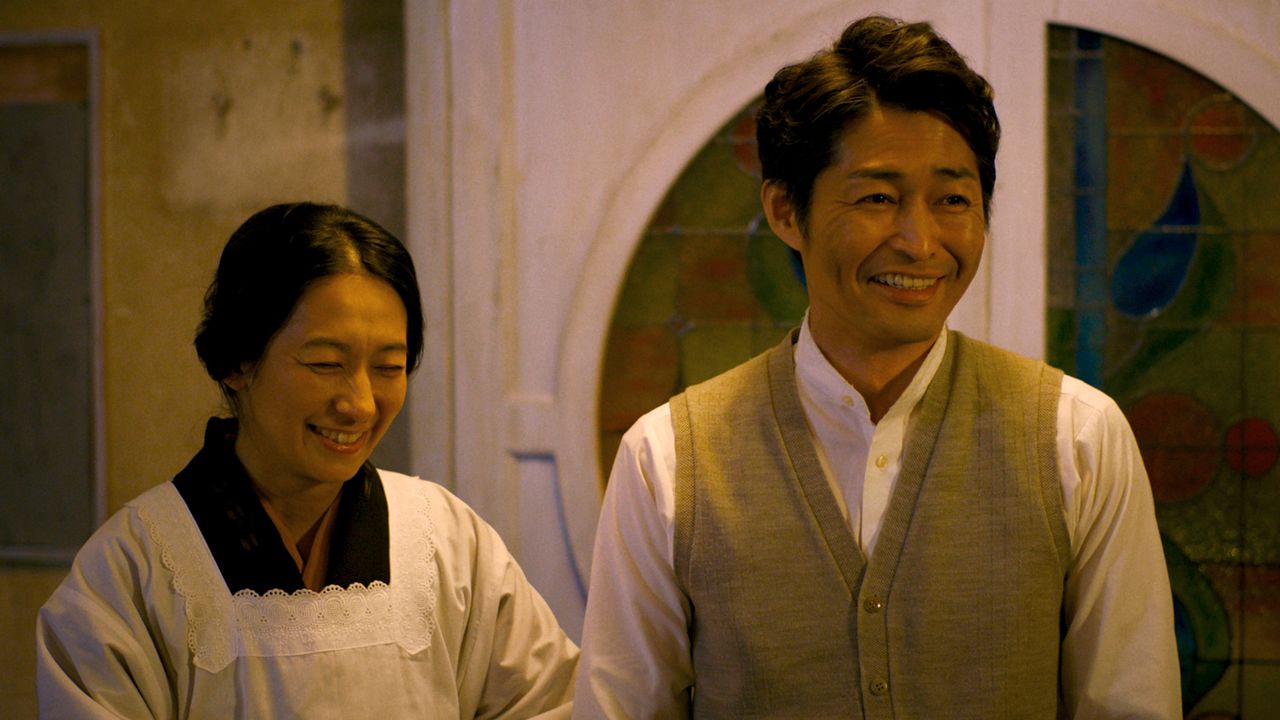 Possibly the highlight of Ring Wandering is the final scene, a deft callback to the movie’s intro, with Sōsuke walking through a field as the camera pulls upwards to reveal an unexpected vision at which the viewer cannot help but gasp in admiration. Surprisingly, Kaneko says the idea for the opening and closing sequences came more than a year after the initial screenplay was completed.

“After rewrite upon rewrite, I feel like it was with that last cut that what I really wanted to portray finally came into view. Until a work is finished, you’re always looking for the right solutions, and though the film’s eventual shape was pretty much established after the fourth rewrite, for another year or so we still didn’t have the opening and closing sequences planned,” he explains. (Shooting was based on the script’s thirteenth rewrite.)

Still, Kaneko insists that the results of such a collision between the intentional and the incidental are always the most interesting: “You’ll never capture the scenes you want to just by waiting for them. You need to supplement your initial expectations by embracing chance occurrences. People often describe my films as “magical”, but I feel like I’m just trying to capture the world in as natural a way as possible. Perhaps it’s an attempt to recreate my own childhood view of the world using the camera as a conduit.” 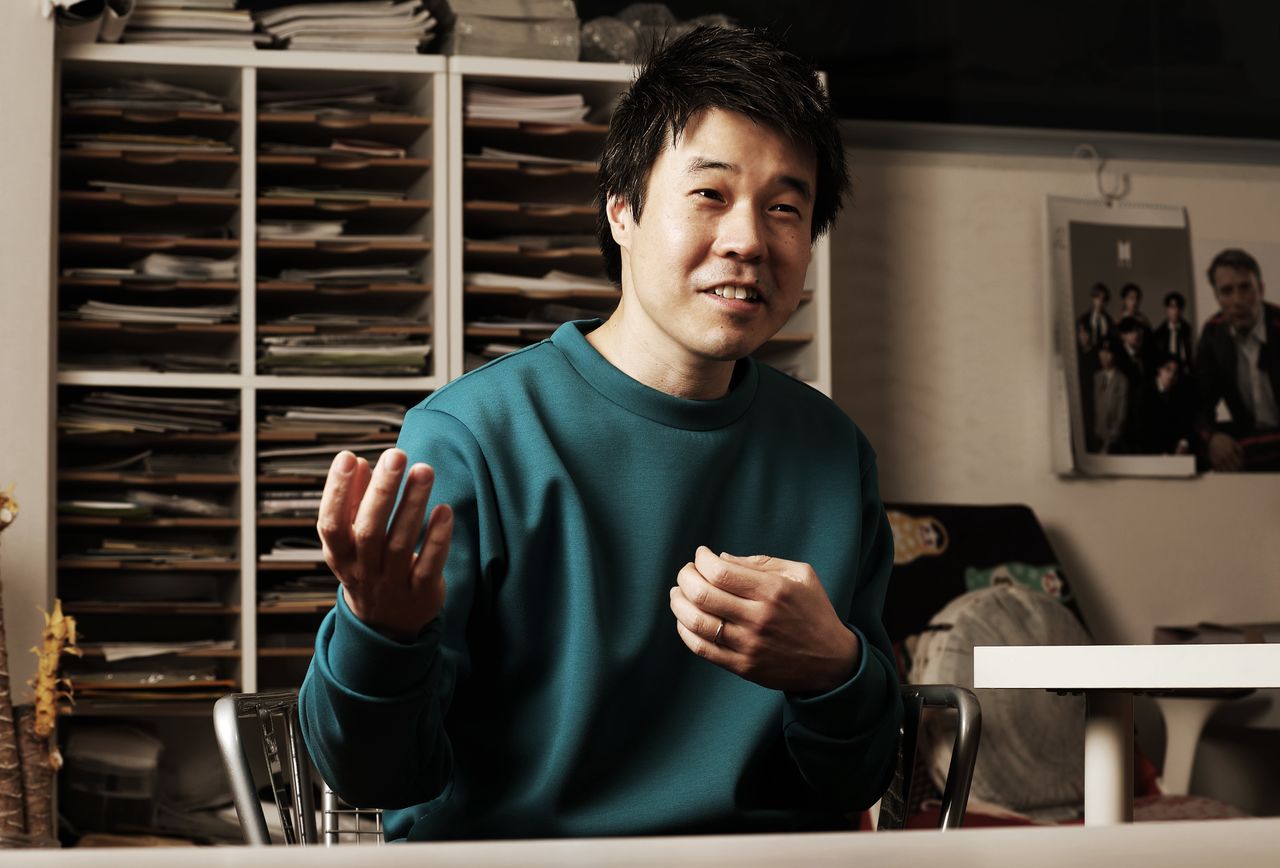 In FY 2021, Kaneko was selected as one of three directors included in an initiative by Japan’s Agency for Cultural Affairs to support the participation of Japanese cinema in overseas film festivals, and parallel to screenings of Ring Wandering he is also working on an upcoming feature-length project entitled Suiko (The Water Sprite). And while it’s true that funding is easier to secure for international co-productions with filming and casting conducted in a partner country, this time, too, his aim is to capture quintessentially Japanese landscapes as a backdrop to the story of an artist who uses mineral pigments from the natural environment. 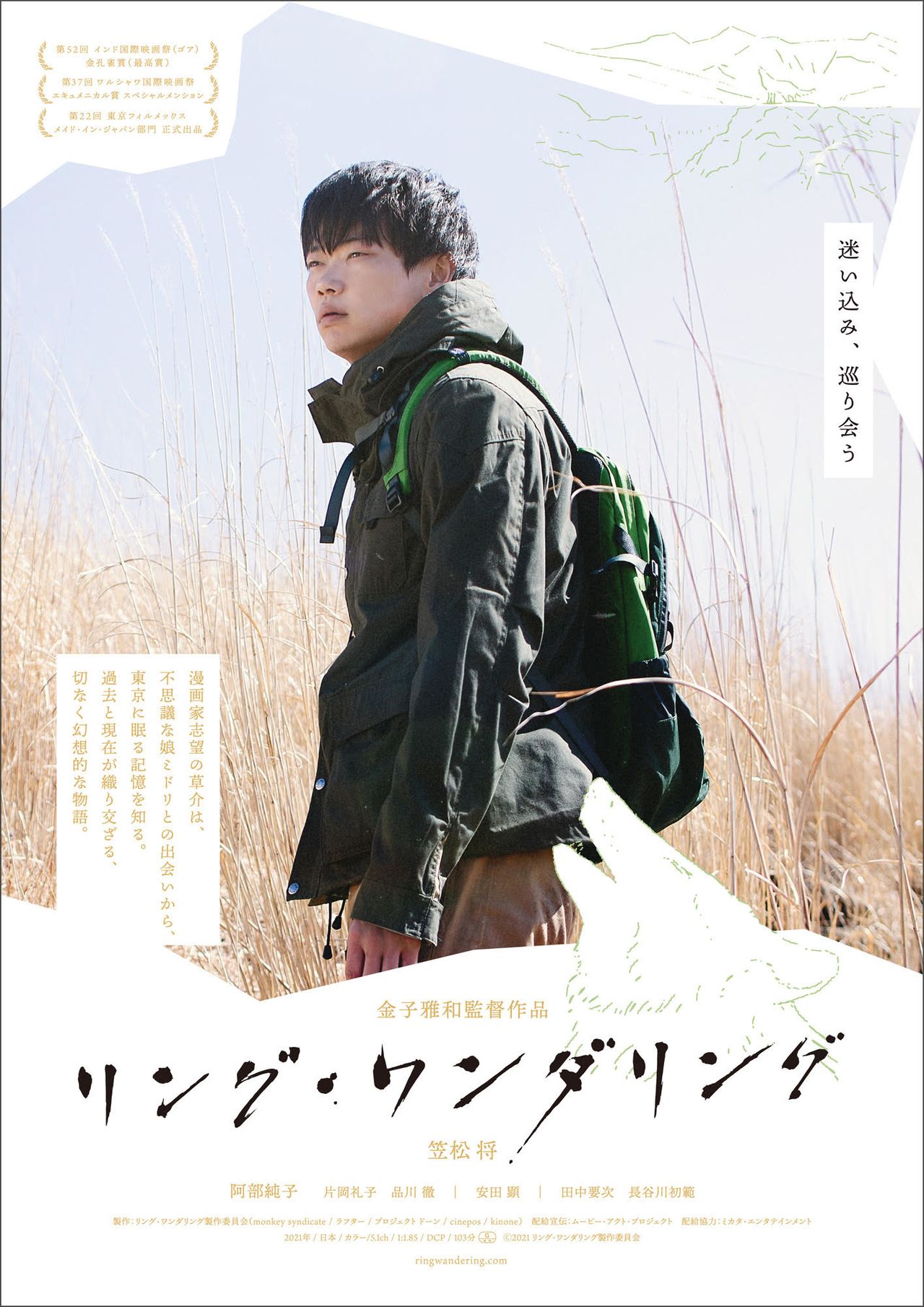