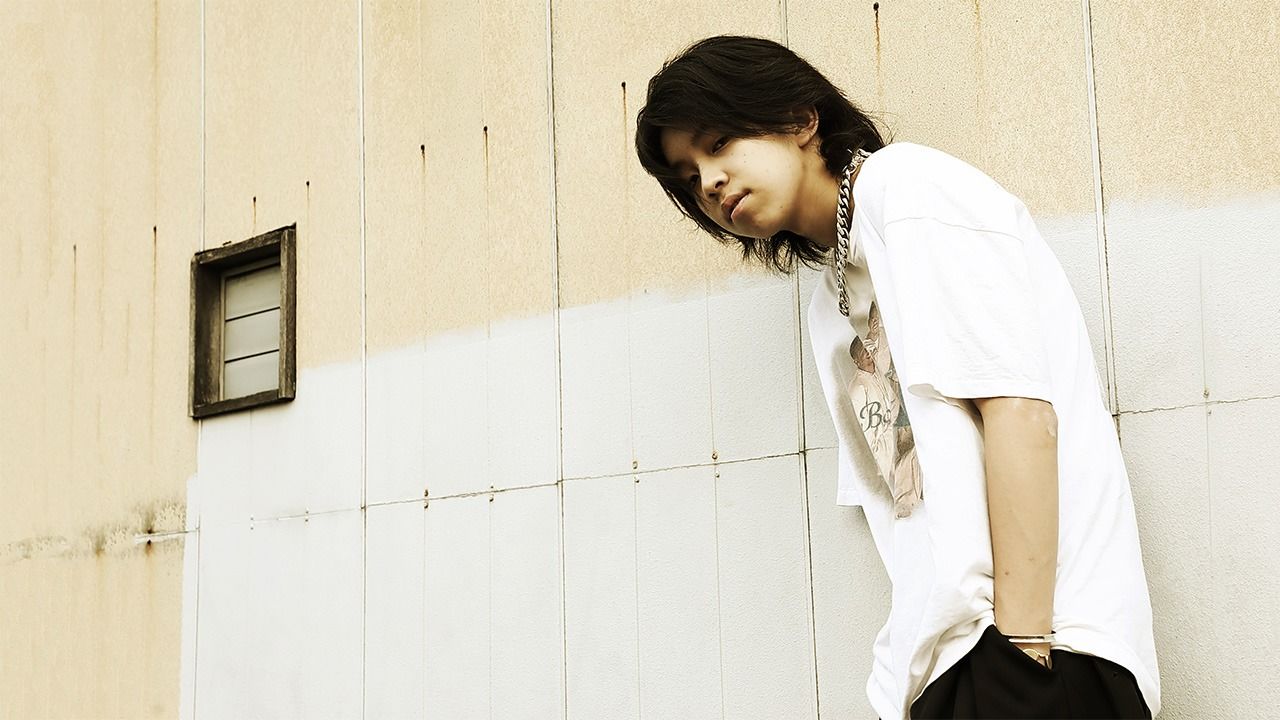 “Tarō the Fool” Star Yoshi Takes the World by Storm

Entertainment Cinema Oct 28, 2019
Yoshi, a charismatic youth with no previous acting experience, debuted recently as the lead character in the film Tarō no baka (Tarō the Fool). The purity and sparkle of his performance hint at the limitless potential of this rough gem discovered by chance. The fearless teenager, who may develop into an anti-hero sweeping away everything in his path in a new era, talks about where he is now. 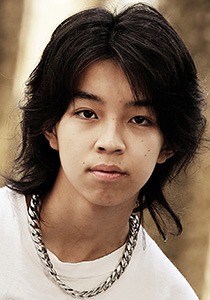 Born in 2003 in Hiroshima Prefecture to a Hong Kong Chinese father and a Japanese mother; moved to Tokyo at age three. Has modeled for brands like Helmut Lang, X-girl, and Nike since he was 13. Made the Forbes Japan “30 Under 30” list of innovators under the age of 30 in 2018. Released his first music album, Sex Is Life, in May 2019 and debuted as an actor in Tarō no baka (Tarō the Fool) in September 2019.

Young, But No Fool

The recently released Tarō no baka (Tarō the Fool), directed by Ōmori Tatsushi, features a 15-year old boy who, lacking the proper documentation, has never been to school. Not even certain of his birth name, the youth goes by the name Tarō and, together with two high-school-age buddies, leads a rootless existence with few future prospects.

Japanese society today, seemingly in a stable, mature period after its postwar rebirth and its pell-mell years of torrid economic growth, harbors people like Tarō who have fallen through the cracks. If, for whatever reason, a mother fails to enter her newborn’s particulars in her koseki—the family register that records and certifies people’s identities and family relationships—the child has no official presence. The Ministry of Justice estimates that there are currently more than 700 individuals who lack a family register, but experts believe that the number probably exceeds 10,000.

While this story is rooted in reality, the number of unregistered individuals means that many people have never encountered an individual in this situation. Could a youth to play the part of Tarō be found? At the start of his project, Ōmori, who directed the film based on his own screenplay, worried whether he could find a suitable individual for the role. Still not satisfied that he had found the right person after auditioning over 300 young actors, Ōmori happened to catch a glimpse of Yoshi, who had no acting experience at all, on Instagram. Yoshi was 15 when the film was made. 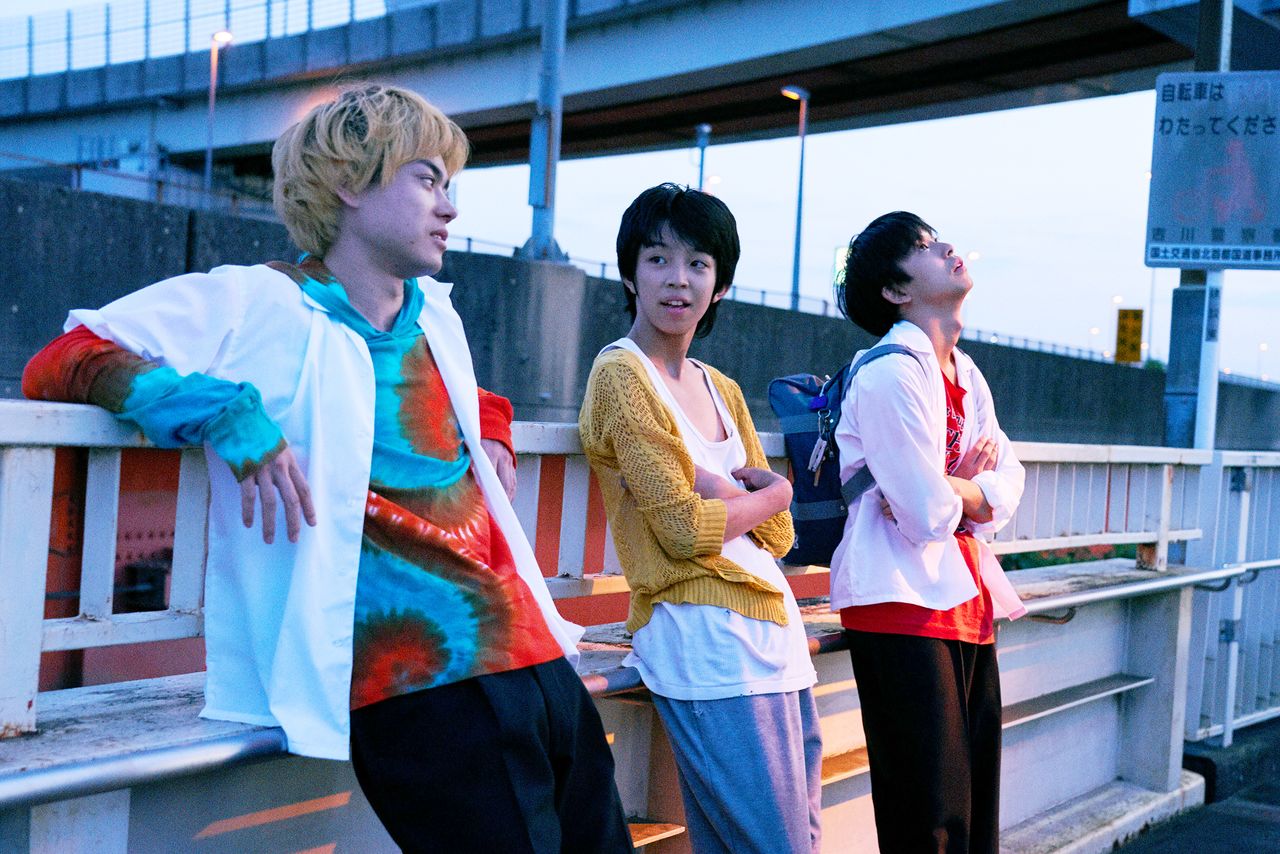 Like his character, Yoshi relates that he disliked school, had little in common with his classmates, and found it hard to settle down. He says that he was the type of person who acted by instinct and who hated doing anything that seemed pointless. Once he realized how he felt, he started hanging out with adults, whom he got to know through his interest in clothing and fashion.

Influenced by his older friends, Yoshi began posting on Instagram and attending fashion-world parties. The decisive event that set him on his current path occurred in December 2016, when at the age of 13 he attended the Tokyo launch party for the street fashion brand Off White. Appearing at the party wearing the Industrial Belt, one of the brand’s hot items, around his neck, he caught the eye of Virgil Abloh, the item’s designer. A photo of Yoshi with Abloh, who serves as art director for Louis Vuitton’s men’s line and is one of fashion’s most influential figures today, zoomed around the world on Instagram. 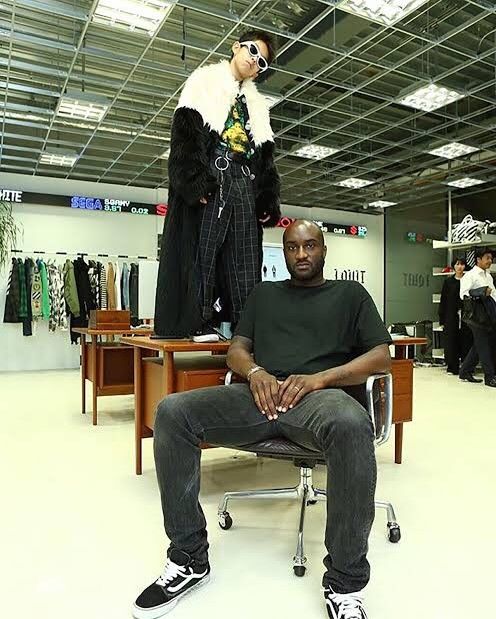 A photo of Virgil Abloh and Yoshi uploaded to Instagram. (Photo courtesy of Starbase)

Yoshi—who was suddenly being photographed and interviewed by people who were no doubt asking themselves “Who is this kid?”—had accidentally become part of the fashion world. In those days, he was simply thought of as a fashion-loving youth who was a focus of attention, but who was not a model and did not fit any other neatly defined slot. Yoshi himself didn’t consider himself to be something special; he had no inkling of the kind of future in store for him. The one thing he did know, though, was that he felt comfortable in the fashion world and that he wanted to make a name for himself there.

Soon becoming a hugely popular model at photo shoots and fashion shows for luxury brands, Yoshi branched out into art and fashion design. He released his first music album in 2019, with his own artwork gracing the album’s cover. Read on for our interview with him to learn how he sees his activities so far and what he hopes to do next. 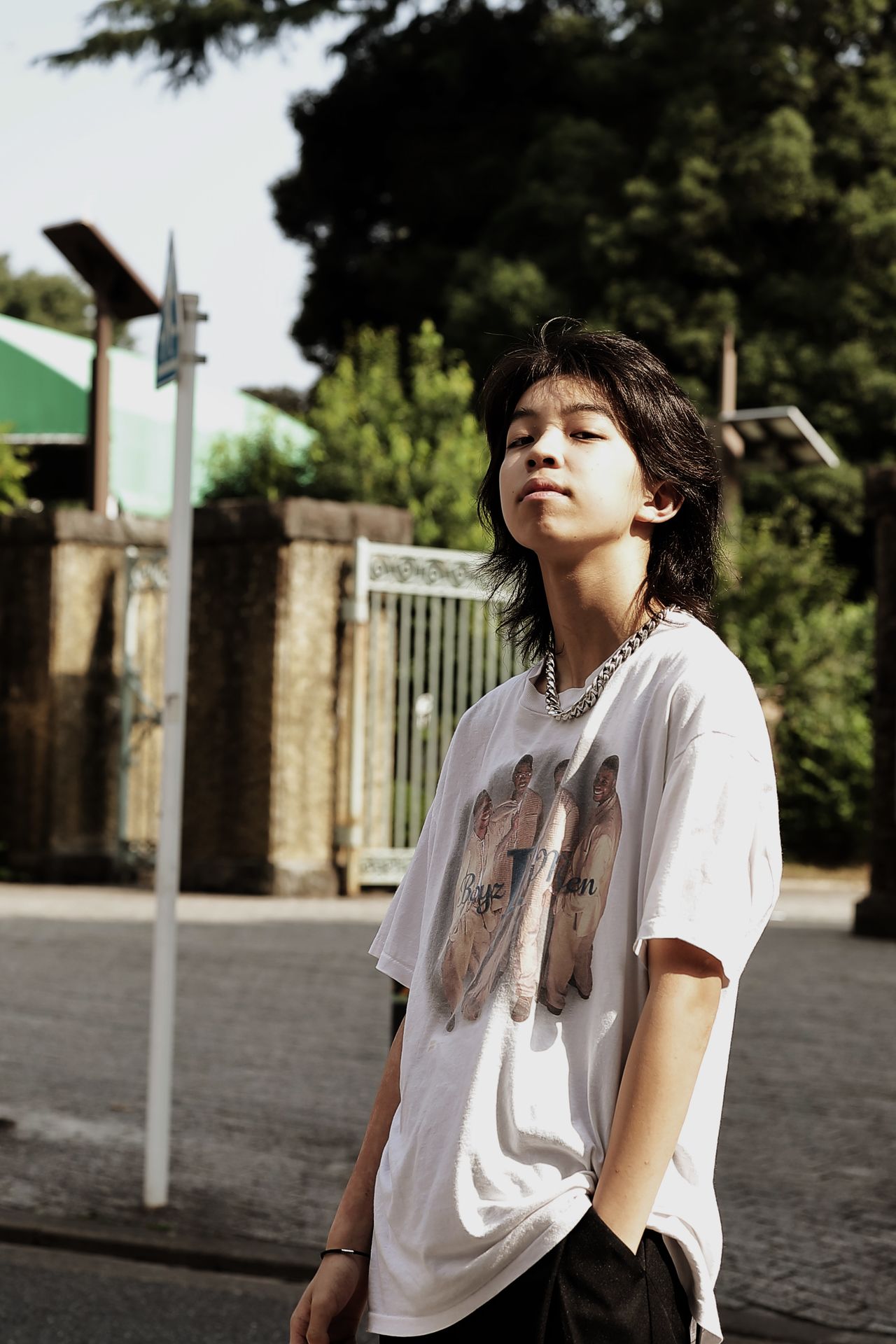 Yoshi, 16, has matured, nearly a year after the shooting of Tarō no baka.

The Right Place at the Right Time

INTERVIEWER  You’ve been active in films and music since last year.

YOSHI  Yeah, I got into music when I went to a friend’s shoot for a music video. I was standing by the DJ booth, singing to myself?, when the producer came up and said “Hey, you can sing.” Before I knew it, I was recording an album. It’s all a question of being in the right place at the right time. It feels like there have been so many miracles in my life.

INTERVIEWER  What was being on a film set like?

YOSHI  I’d never acted before, so I was nervous before the camera started rolling. I worried what would happen if I didn’t get things right for the whole month the film was being shot. But I went ahead and everything turned out fine. There were like thirty or forty people on the set—the other actors, all the various people filming, and so on—but everything came together and we were a team. That got to be fun for me too. Everything went smoothly, and we just rocketed along. [Laughs] 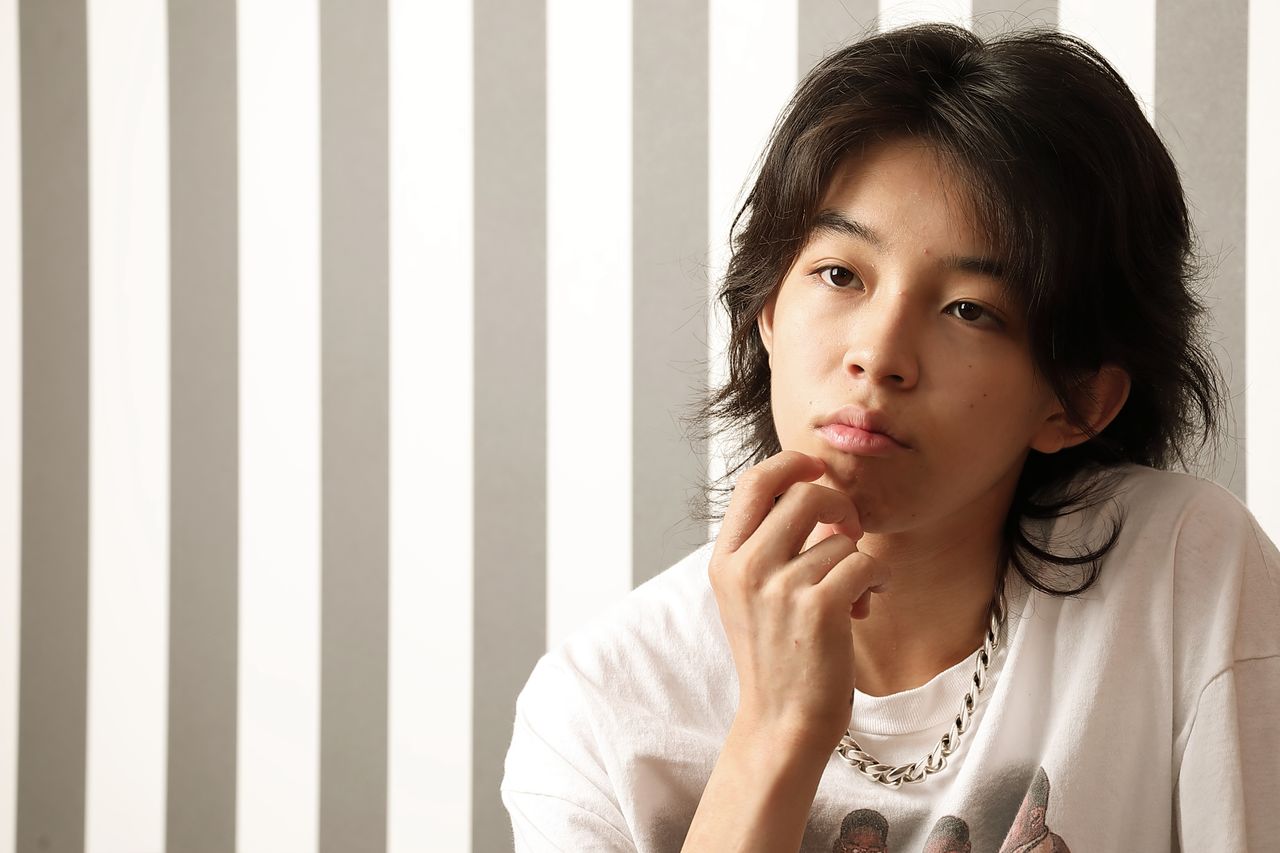 INTERVIEWER  Aren’t you ever scared?

YOSHI  Well, I am kind of a worry-wart, [Laughs] but my outlook is always optimistic, so I never feel afraid. I’m not bashful at all, so that’s an attribute that may be in my favor. I never let age influence my interactions with Ōmori Tatsushi, the director. I’m using polite speech with you right now, but rather than expressing superficial respect I want us to be on the same wavelength, talking heart to heart.

INTERVIEWER  Do you act the same with everyone?

YOSHI  Usually, when you meet someone with an impressive title or résumé, it’s  “Ah, it’s such an honor to meet you.” But that just isn’t cool. I act the same as always, saying, “Oh, hello.” I’m simply interested in meeting people, be they politicians or whatever, and getting to know them. I want to find out what they’re thinking. Getting to know people that way is such a good thing. You get to meet interesting people, too. I think I’m really gifted at communicating, and that’s the skill I have the most confidence in. 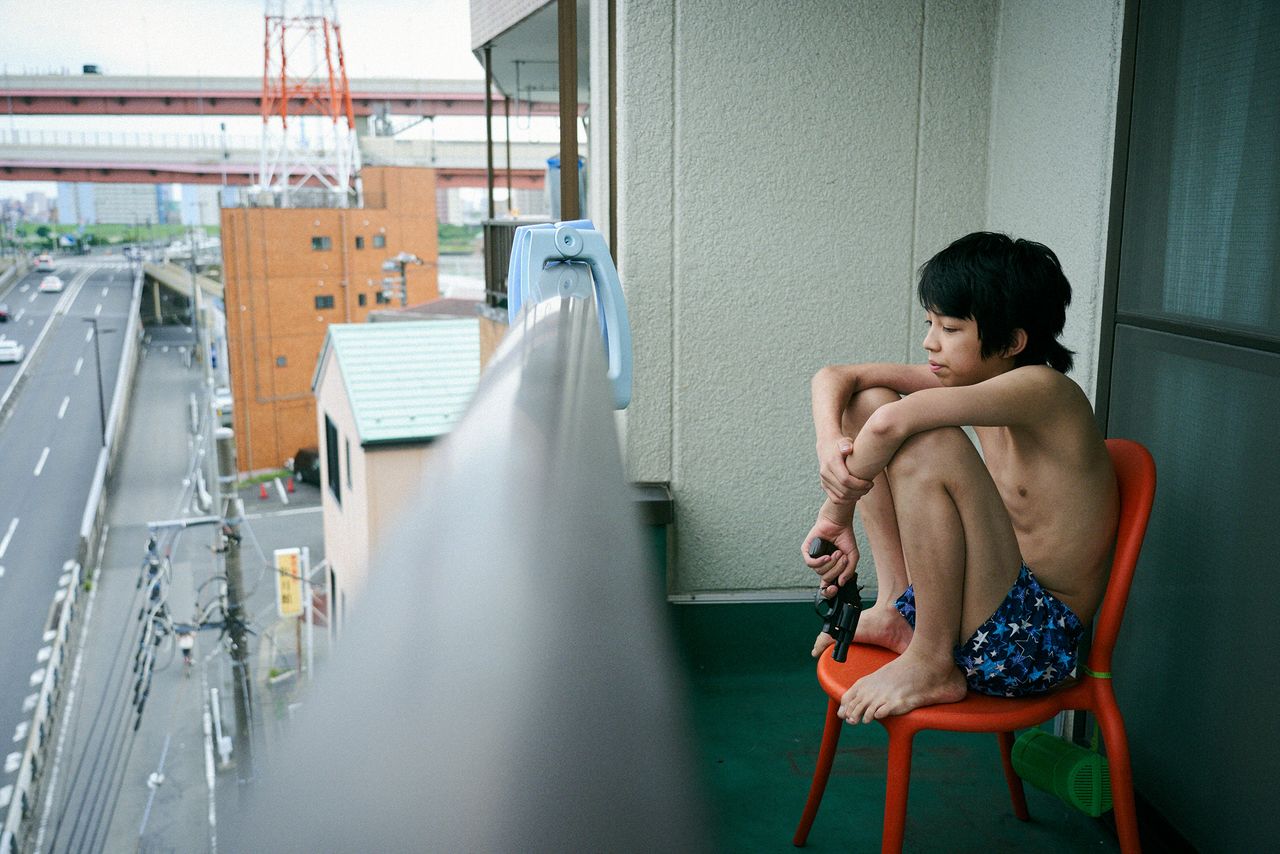 INTERVIEWER   But so many people seem to lack confidence.

YOSHI  I simply like myself and have confidence in myself. That doesn’t mean I’m a narcissist, it’s just a sign that I respect myself. So, if somebody asks me who I respect, I wouldn’t answer “Michael Jackson.” The person I respect most is me, and I like to probe to discover what kind of person I am.

INTERVIEWER  How well do you think you know yourself?

YOSHI  I don’t know the answer to that yet. I’ll probably never know, and I’m okay with that. Don’t you think it would be boring to arrive at your final destination? My pursuit of my own self is an endless quest.

INTERVIEWER  You’re active in many different areas right now. What is it that you really want to do?

YOSHI  Films, music, art shows—to me, they’re all ways of expressing myself. Ways to let people know who I am. It’s all expression to me, whatever format it takes. I want to do things I haven’t done before, although I don’t know exactly what those things are right now. I want to give 100 percent in everything I do. Don’t you think it would be cool if I could be successful in all my activities? I want to create something completely new, to turn people’s heads and make them think, “Can such a person really exist?” 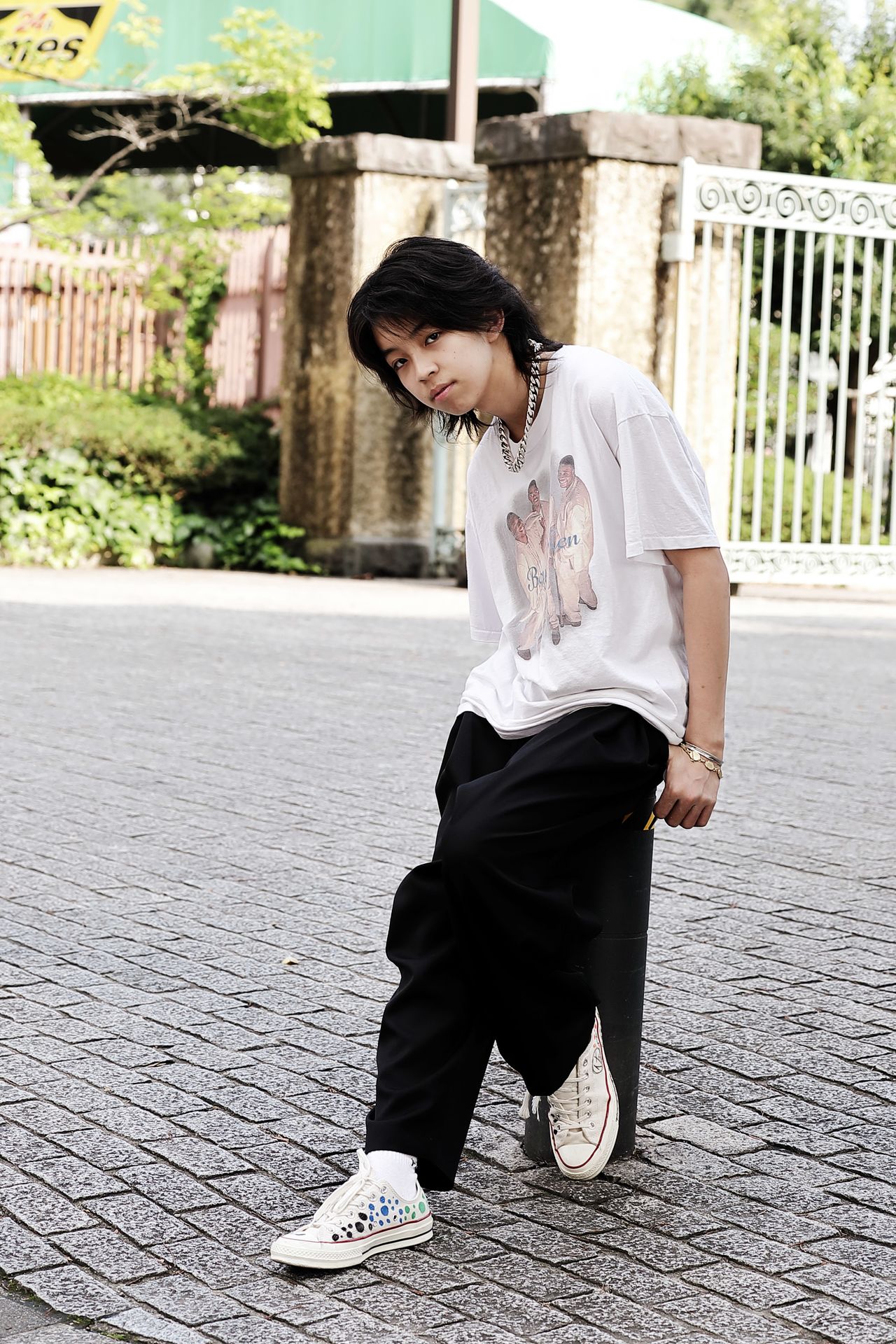 INTERVIEWER  Do you have a specific image of this “new” thing you want to do?

YOSHI  The most difficult thing for me is to create something that’s new and free. Take the Beatles, for example. They were always doing something new, they always kept a step ahead of everybody else. In a class-based society like the UK, here were these young men, who had no prestigious background, being received at Buckingham Palace and decorated, and describing Queen Elizabeth as “a cute granny.” Something like that. Whatever setting I find myself in, I just want to be myself.

INTERVIEWER  Do people like David Bowie or Sid Vicious of the Sex Pistols inspire you too?

YOSHI  I like people from the past. Maybe my heart is with vintage stuff. I like ideas or cultures that aren’t popular among young people today. I think they have a different depth. People nowadays don’t pay much attention to what they see, and their interpretations aren’t deep at all. They don’t think very intensely. I think it must be so boring to think “Well, I’ll work up to this point,” but when it comes to personal interests, they only take a superficial approach. I give my full attention to everything I do. 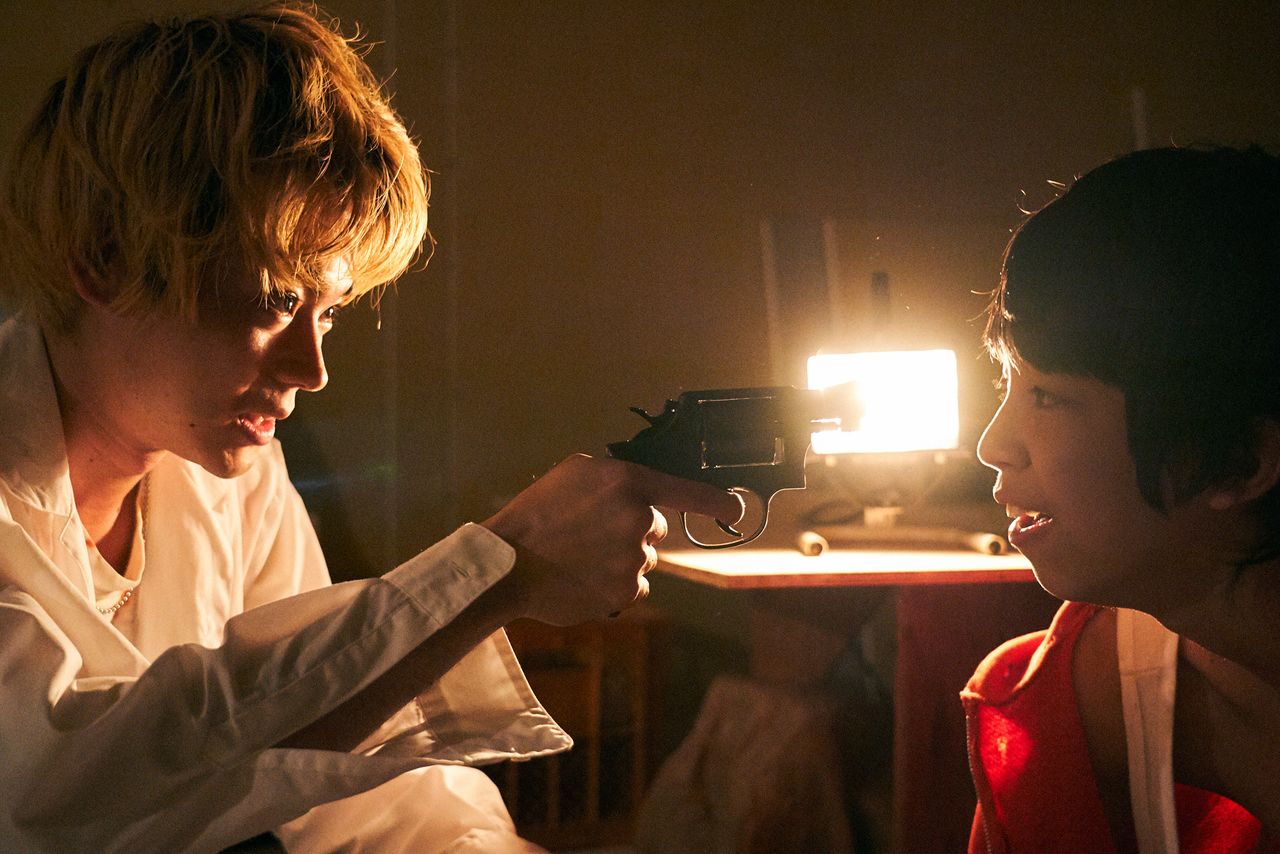 INTERVIEWER  In the film, Tarō carries through when he gets worked up. Do you feel that you’re the same?

YOSHI  Yes, Tarō and I are similar in certain ways. But Tarō is a very solitary figure, with darkness somewhere in his heart. I don’t have that darkness, [Laughs] but I’m a bit crazy. We’re similar in terms of having energy to burn and acting as the spirit moves us. Working is what I love best, like right now when I’m being interviewed. I’m proud of what I do, and being able to express myself is what I enjoy most.

INTERVIEWER  Now that the film has been released, you’re in the spotlight. What would you like to do next?

YOSHI  I want to do something new. Life is a piece of art—it’s what you can sketch on that canvas.

I want to become more famous and make a mark on the world. I want to make money. I simply like things involving a sense of adventure, of a dream to pursue. It seems that people my age aren’t so interested in that. These days, there are few things that people aspire to; I think that’s too bad. I want to be Yoshi, the guy who shakes things up.