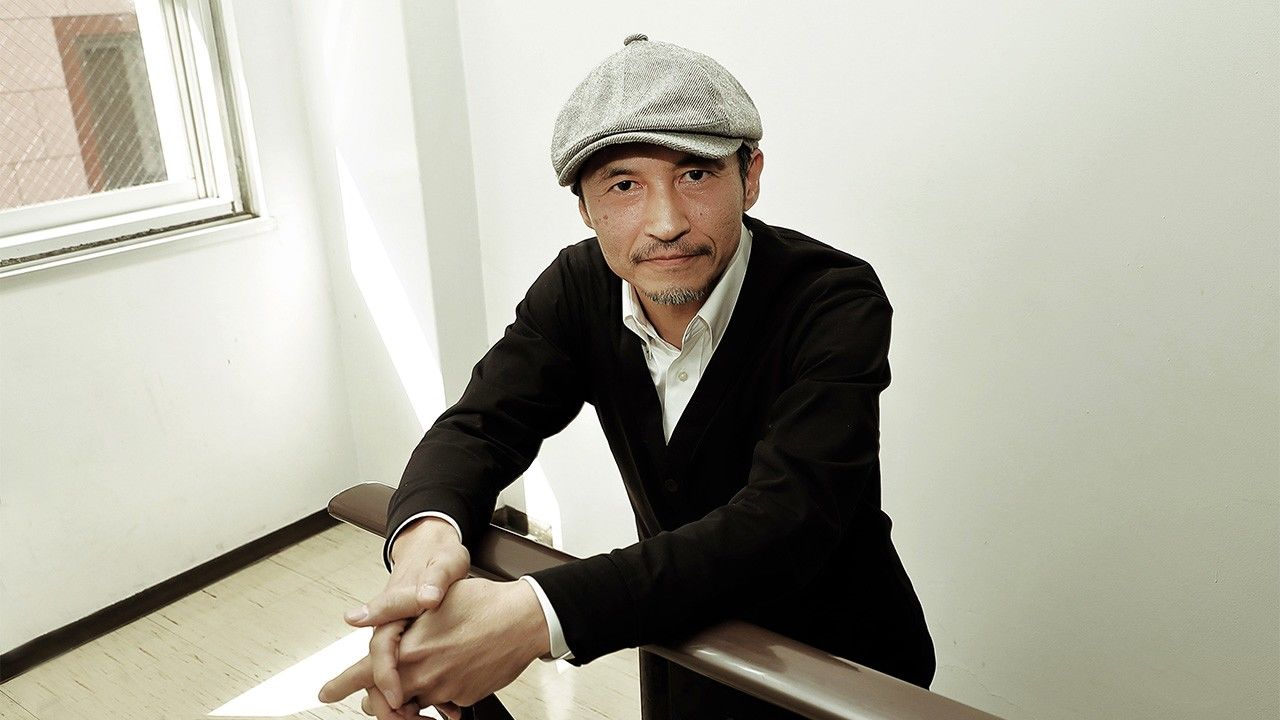 Cinema Apr 17, 2020
The Dancing Homeless, a documentary film directed by Miura Wataru about a group of homeless dancers, opened in theaters this spring. We asked dancer and choreographer Aoki Yūki how the novel dance company came to be, what kind of expression it aspires to, and how it relates to his own dancing. 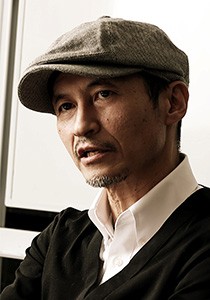 Born in 1968 in Hyōgo Prefecture. Has choreographed numerous music videos, including Chatmonchy’s “Shangri-La” and L’Arc-en-Ciel’s “Stay Away,” and many commercials. Aoki witnessed the terrorist attacks in New York in 2001, an experience that caused him to rethink his dance career after returning to Japan. Working with the Big Issue Japan Foundation, he gathered together a number of homeless people to form the dance group Newcomer H Sokerissa.

The Dancing Homeless, a documentary that hit theaters in Japan in March 2020, follows current and former street dwellers as they practice dance, perform in public settings, go about their daily lives, and talk frankly about their individual circumstances. 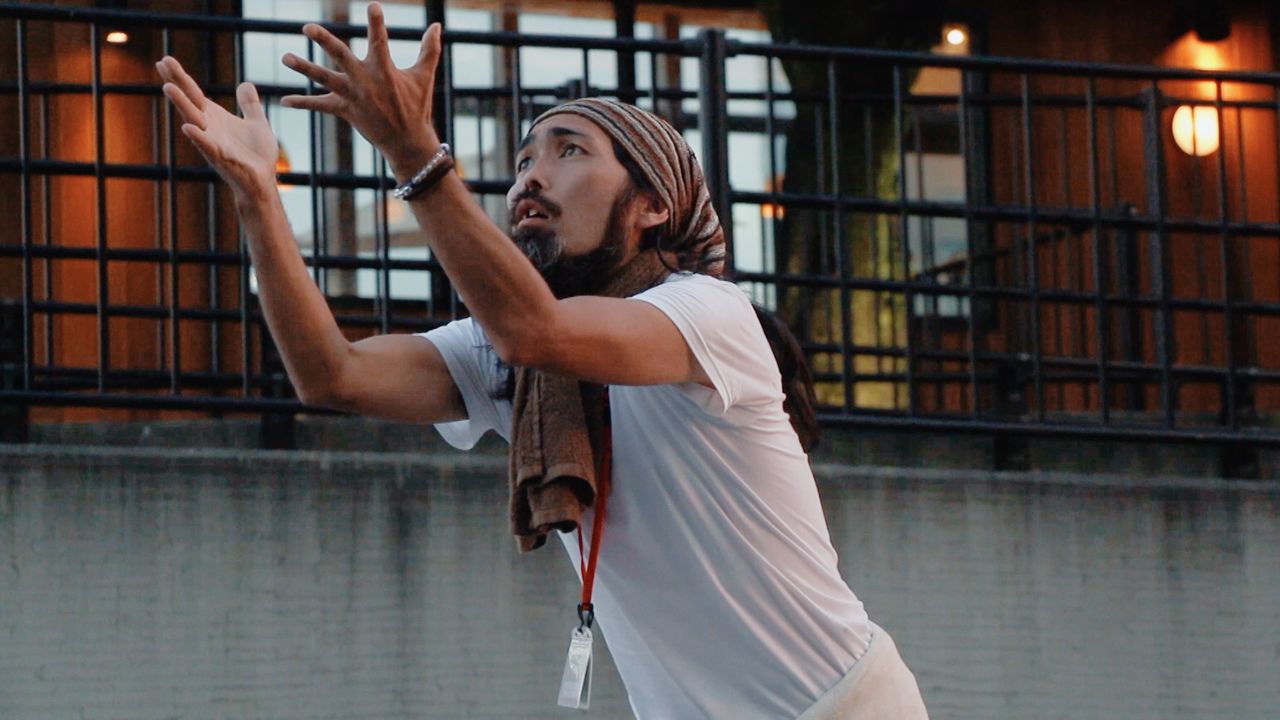 These are people who have suffered bitter failure time and time again. There is the former Self-Defense Force recruit who once dreamed of becoming a dancer but, after failing in his relationships and drowning in debt, finds himself living in the Shinjuku bus terminal; the former newspaper carrier who suffers from Meniere’s disease and has lost his job and his home; the 70-year old who has been running away all his life and has spent the past decade on the streets; and the former pachinko shop employee who was only 15 when he fled his home to escape from an abusive father. They come across as awkward and hesitant at first; yet in front of the camera they brim over with humor and humanity. 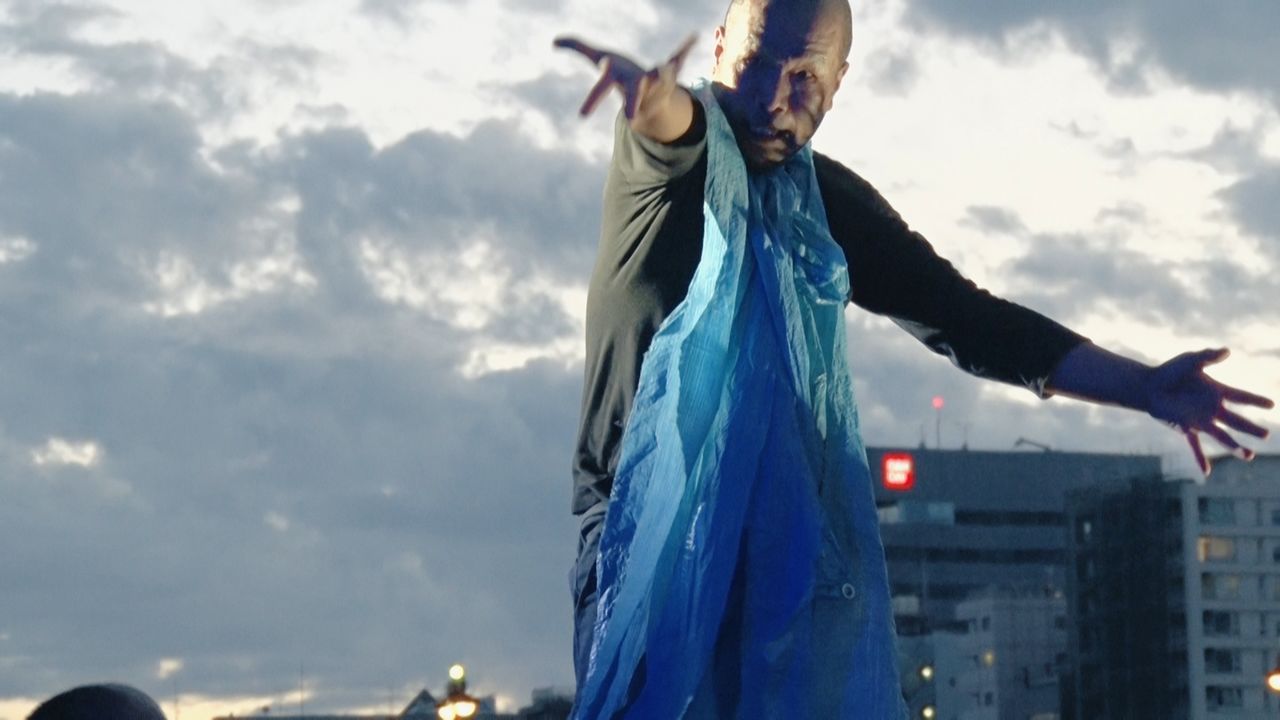 Aoki Yūki accepts these people just as they are. He is intrigued by the possibilities for artistic expression by people who have stripped themselves of everything, who have nothing left but raw, primitive bodies. Aoki organized the dance company Newcomer H Sokerissa in 2005, and for the past 15 years has led the group of homeless men on a journey of exploration. Before talking about the group, however, let’s turn our attention to Aoki and his own personal journey.

A Terrorist Attack and an Awakening

Aoki was inspired to become a dancer when he first saw Michael Jackson perform “Billie Jean.” Three days after graduating from high school he left his hometown of Kobe for Tokyo. After an aimless few days, he saw a recruitment ad for the theatrical company Gekidan Himawari and decided to join. This is where Aoki learned the basics of dancing and got his entry into the world of entertainment, performing at popular venues such as Sanrio Puroland of Hello Kitty fame and taking on gigs as a back dancer. Despite having secured a stable career, Aoki was all too aware of the tacky side of the world he had entered, and with a strong desire to relearn from the “real pros,” he left everything behind in 2000 to make his way to New York. Just one year later, he witnessed the terrorist attacks of 9/11. 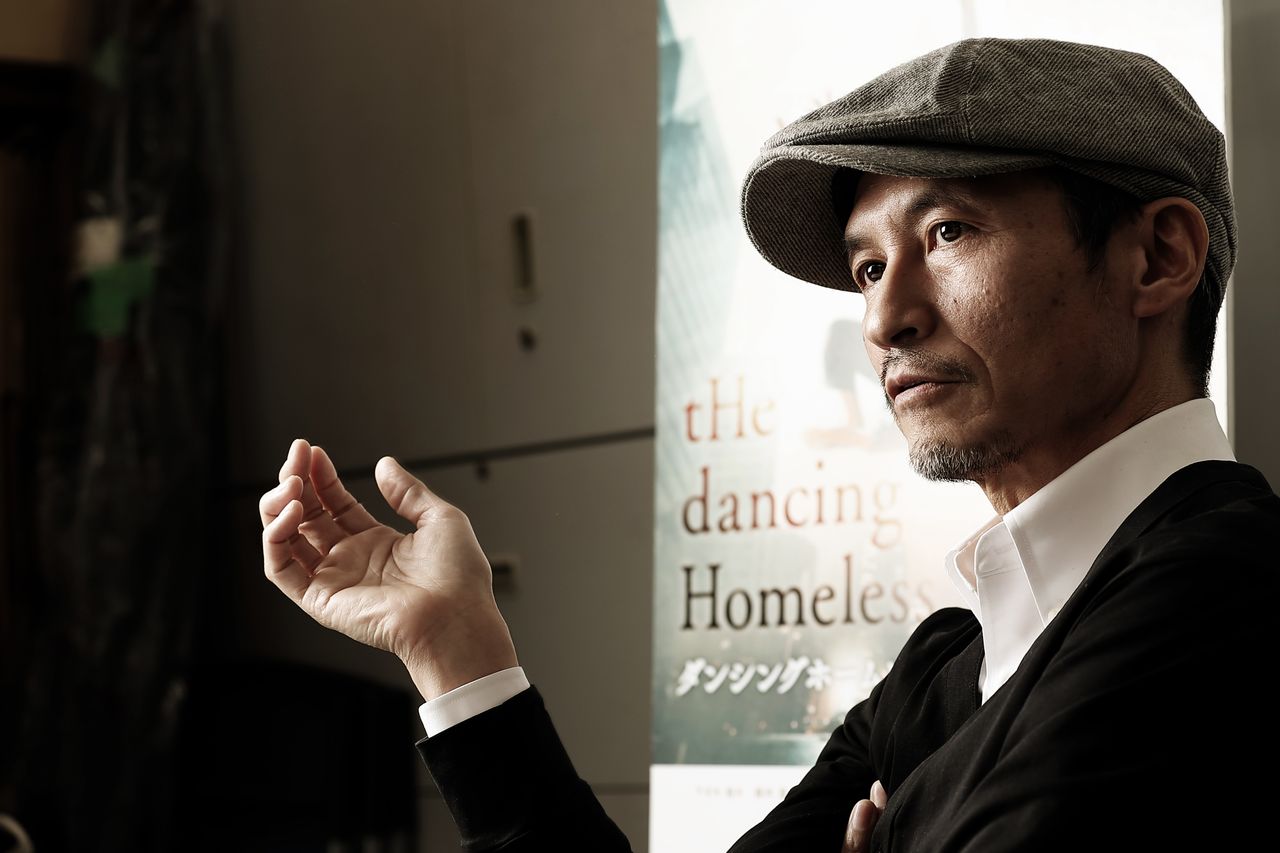 “Everything was in chaos,” recalls Aoki. “People were running around searching for their missing loved ones, others were screaming and crying. It hit me hard because I realized how superficial my approach to dance actually was. I’d been dancing without ever tapping into the energy and power of deep human grief and anger. The experience forced me to rethink what I was, who I was. I wanted to dance in a way that would reverberate deep within peoples’ souls. And so I came home to Japan.”

It was after his return—and while he was still exploring new ways to express himself through dance—that Aoki had another life-changing experience. He stopped one day to listen to some street musicians in front of Shinjuku station and suddenly realized there was a homeless man sleeping on the ground nearby, his bare rear end exposed for all to see. For a man like Aoki, who had sought so hard to refine physical expression through dance, the sight was a staggering rebuke of everything he had valued up to then. 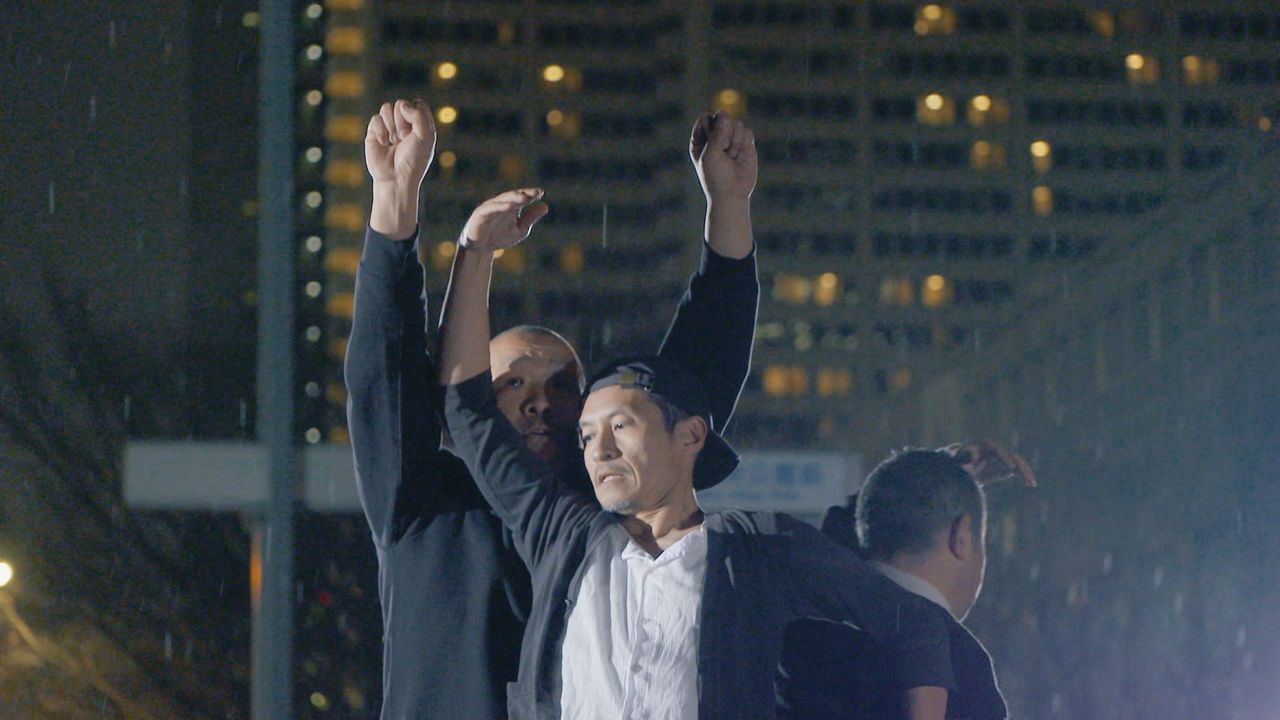 “I was simply amazed. Here I had been trying so hard for moves that would appear cool and polished. I looked at that man and wondered, how would that body express itself, how would people react? One thought led to another and I started to imagine what it would be like to stand before people with that man at my side. How should I be in such a situation? I suddenly realized I was getting close to an answer to all those questions that had been plaguing me since the terrorist attacks in New York.”

Over the next six months, Aoki made his way around the city, seeking out homeless people who would agree to dance with him. After failing miserably to recruit anyone, he turned to the Big Issue Japan Foundation for help. Big Issue, an organization originating in Britain, works to support the homeless and help them become self-supporting by publishing a magazine of the same title for them to sell on the streets. Big Issue arranged for Aoki to present his idea to a group of the homeless at one of their meetings for their sellers. Even as he spoke, however, Aoki realized he wasn’t getting his message across. “I needed them to see what I was getting at.” So on another day, he arranged for the Big Issue group of homeless men to come to his dance studio and watch him dance his heart out. 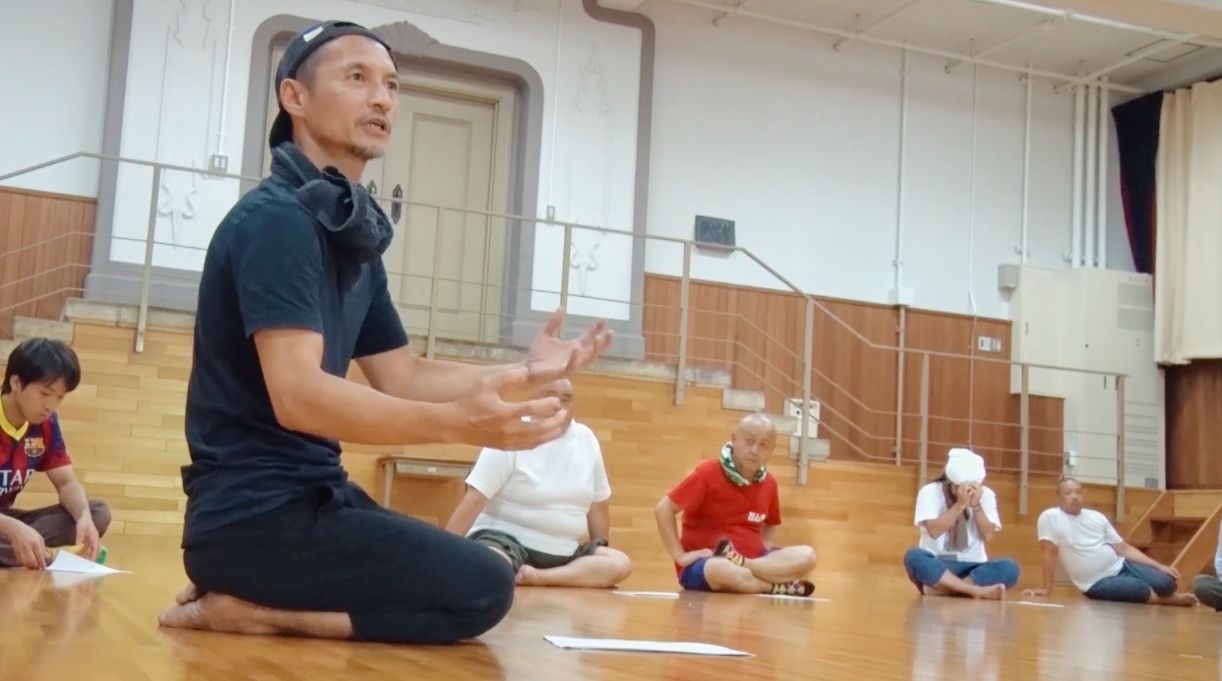 “I did a free-form dance before a group of five, six men. I figured this was my last chance to appeal to them, and I gave it everything I had. I was more nervous than I’d ever been. Not even a performance in the Tokyo Dome compared to this. They watched . . . and then they all said they would dance!”

Aoki at last had his dance company. Practice commenced right away. It wasn’t long, however, before the studio owner started to complain. “The place stinks. Do something!” Aoki recalls having to make liberal use of deodorizers and air fresheners. But even that was a refreshing novelty for him. “When people don’t bathe for a while, this is what they start to smell like.” Everything was a new discovery.

“I was fascinated by how living on the brink can sharpen the five senses, how the physical body adapts to survive. If you’re going to live on the streets for a long time, you can’t be overly sensitive to things. At the same time, when you are sleeping outside, you wake up in a state of alert at the slightest rustle of sound. As a dancer presenting my physical body before an audience, I felt I needed to develop the same kind of physical sensibility these men had.” 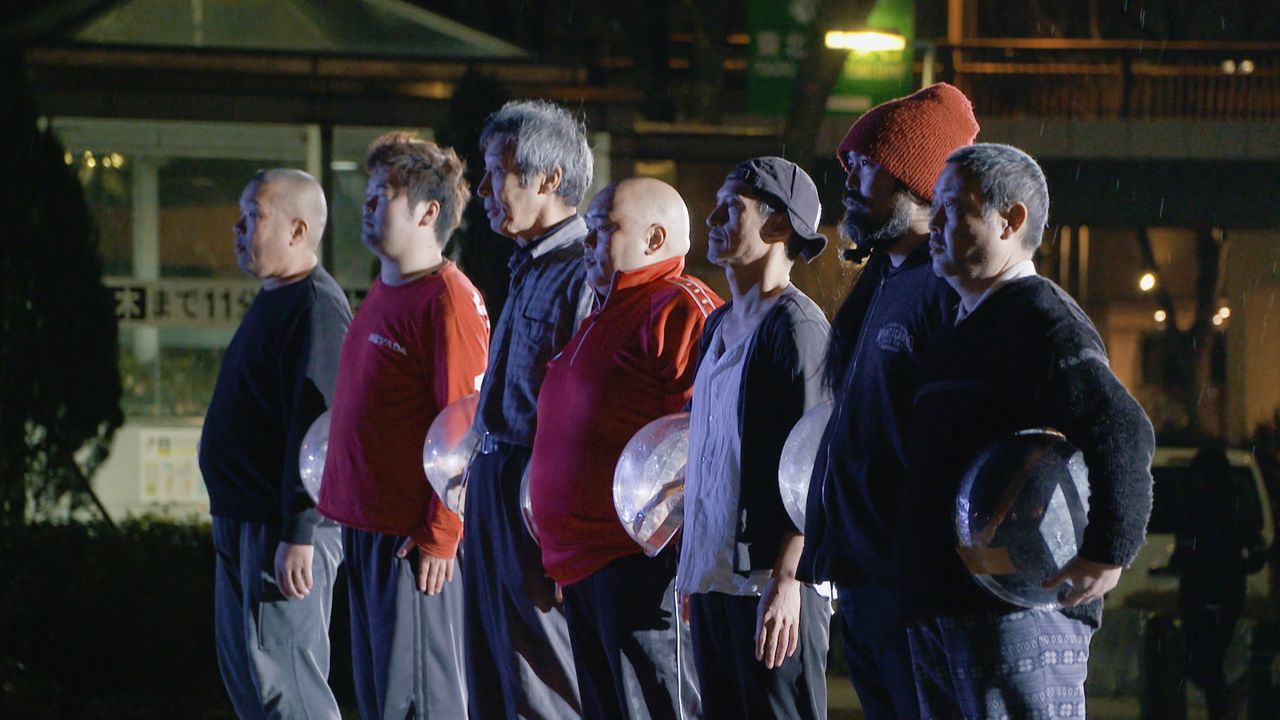 No Need for Rules

Aoki started out trying to teach the men how they should move their arms and legs, but he quickly realized he was only stifling their individual expression. Rather than try to fit them into his own framework, Aoki changed his approach to draw out the movements and techniques that would best express how each man had lived and survived. 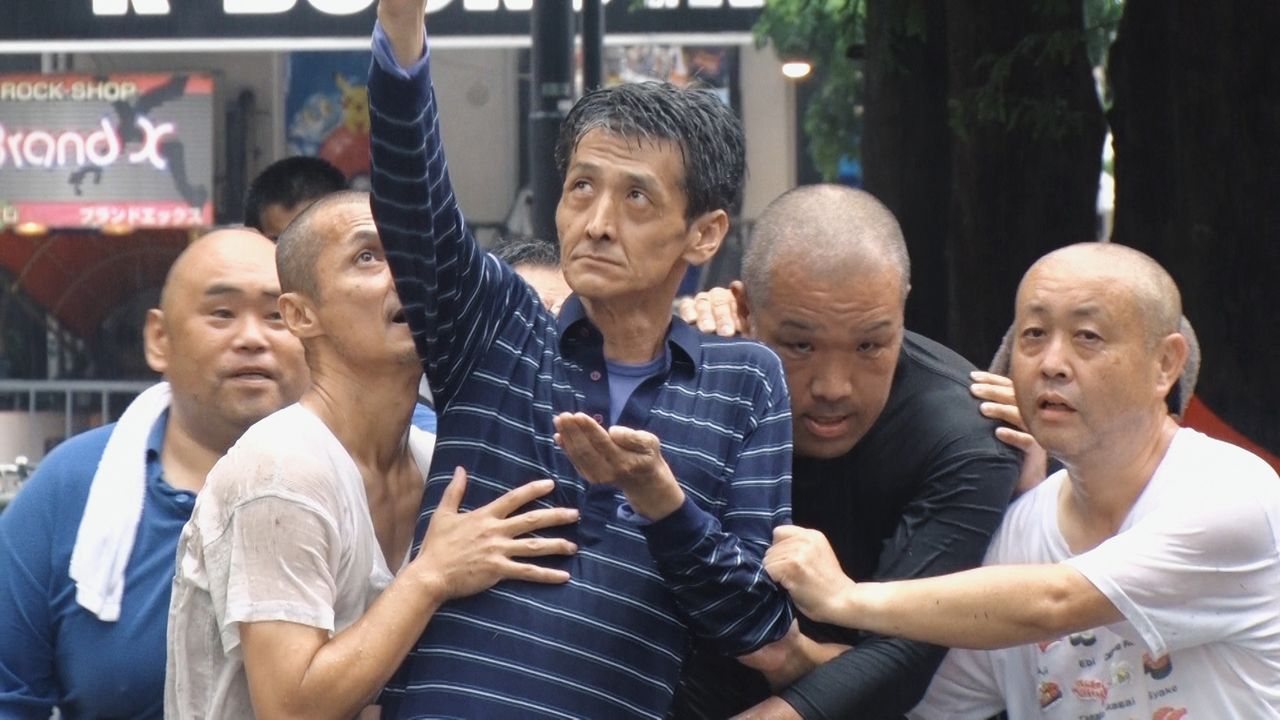 “At the beginning, I had a rule: If you couldn’t make it to practice, you had to let me know ahead of time. Now, though, if they want to take a break, they’re free to do so. I leave it completely up to them. After all, my original intent had been to get these people who had dropped out of society to dance. Forcing rules on them was only going to stifle the life they still had inside. If they felt like it was killing them, who was I to force them to come? I had to change the way I thought about it all.” 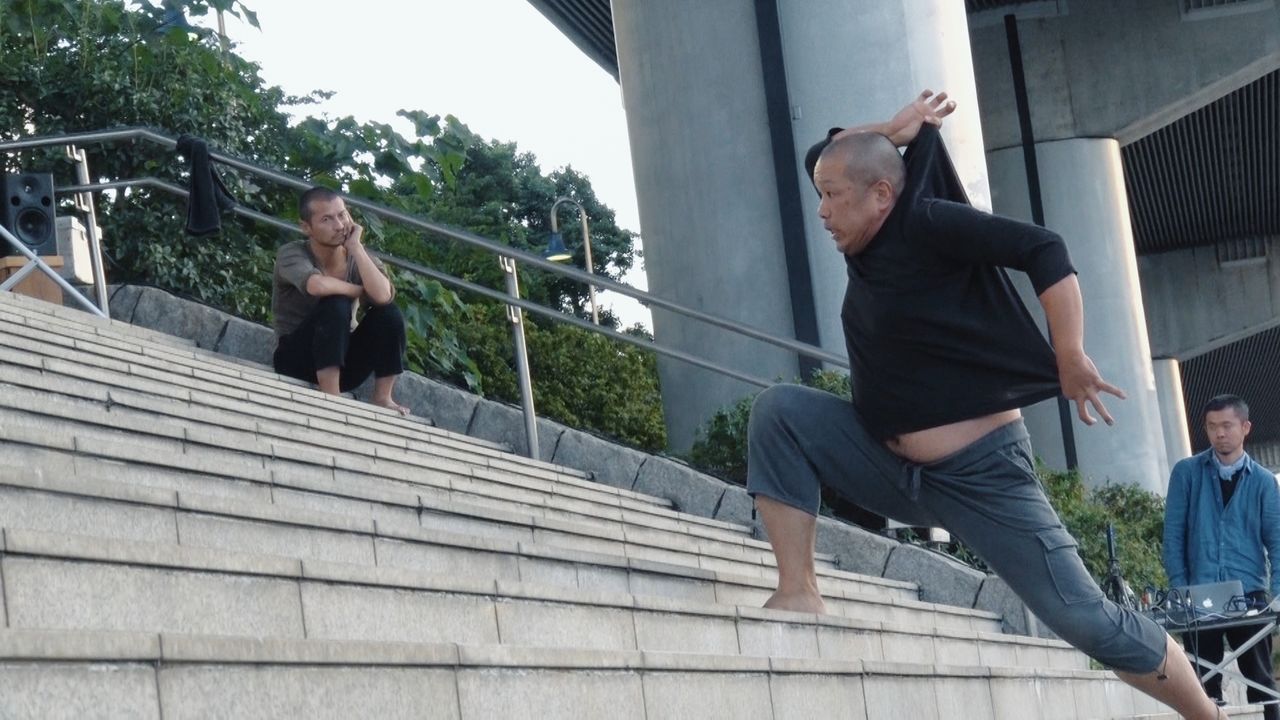 Was that enough to keep them motivated to come to practice?

Aoki notes that he does still have a guiding role to play, though. “Just letting them dance as they please though isn’t enough to create a performance. As their coach and manager, I need to think about how to make the best of their bodies and sensibilities while maintaining the quality of the performance.”

As the group becomes more well known and their appearances in the media more frequent, there are some who criticize the members, saying: “If you can dance, why aren’t you working?” Aoki is unfazed. These are precisely the kind of people, he says, who should be watching Sokerissa perform. 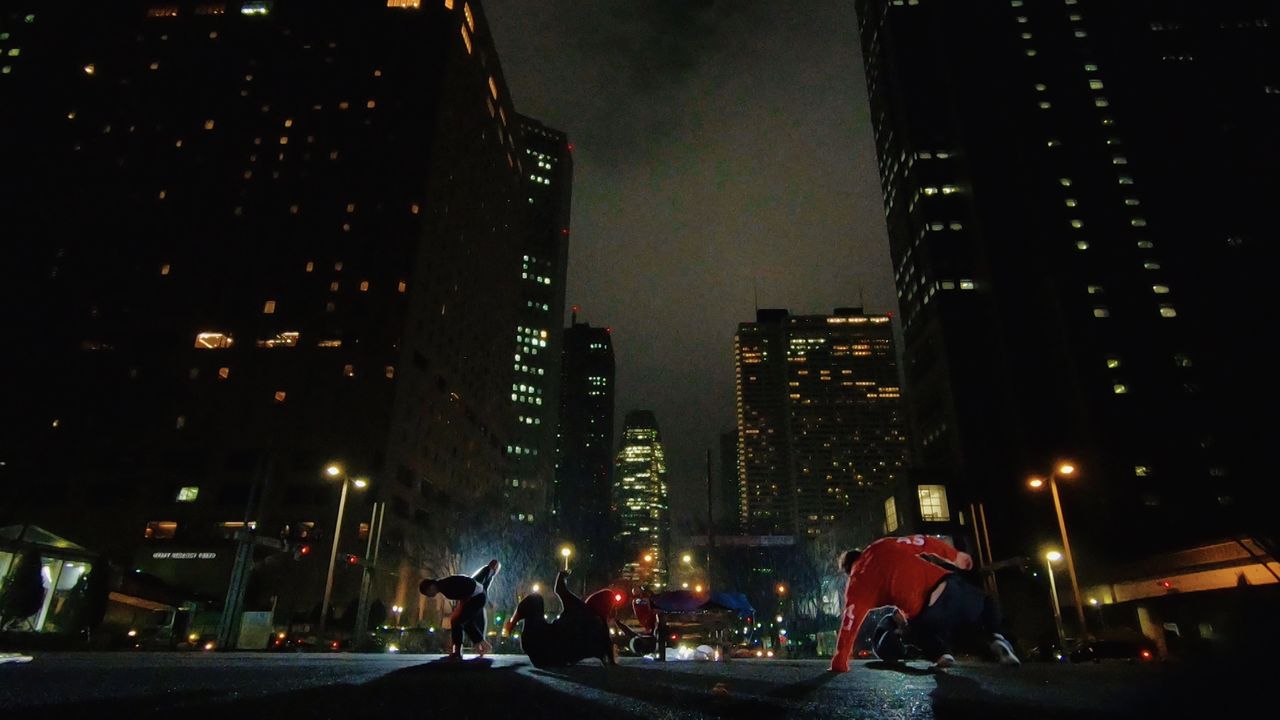 “Critical people like that are probably fighting their own demons. I want to tell them, come and hit us directly with your feelings. I didn’t start this to help a bunch of homeless men get back on their feet. Of course, it’s great if they find that dance helps them to look into themselves and their lives, but if you start out with that kind of objective, you’re going to lose the power of the dance. My interest is in their performance, and I make it a point to relate to them exclusively through dance. I don’t intrude on their personal lives. As a matter of fact, I learned a lot of things about them for the first time after watching this documentary,” he laughs. 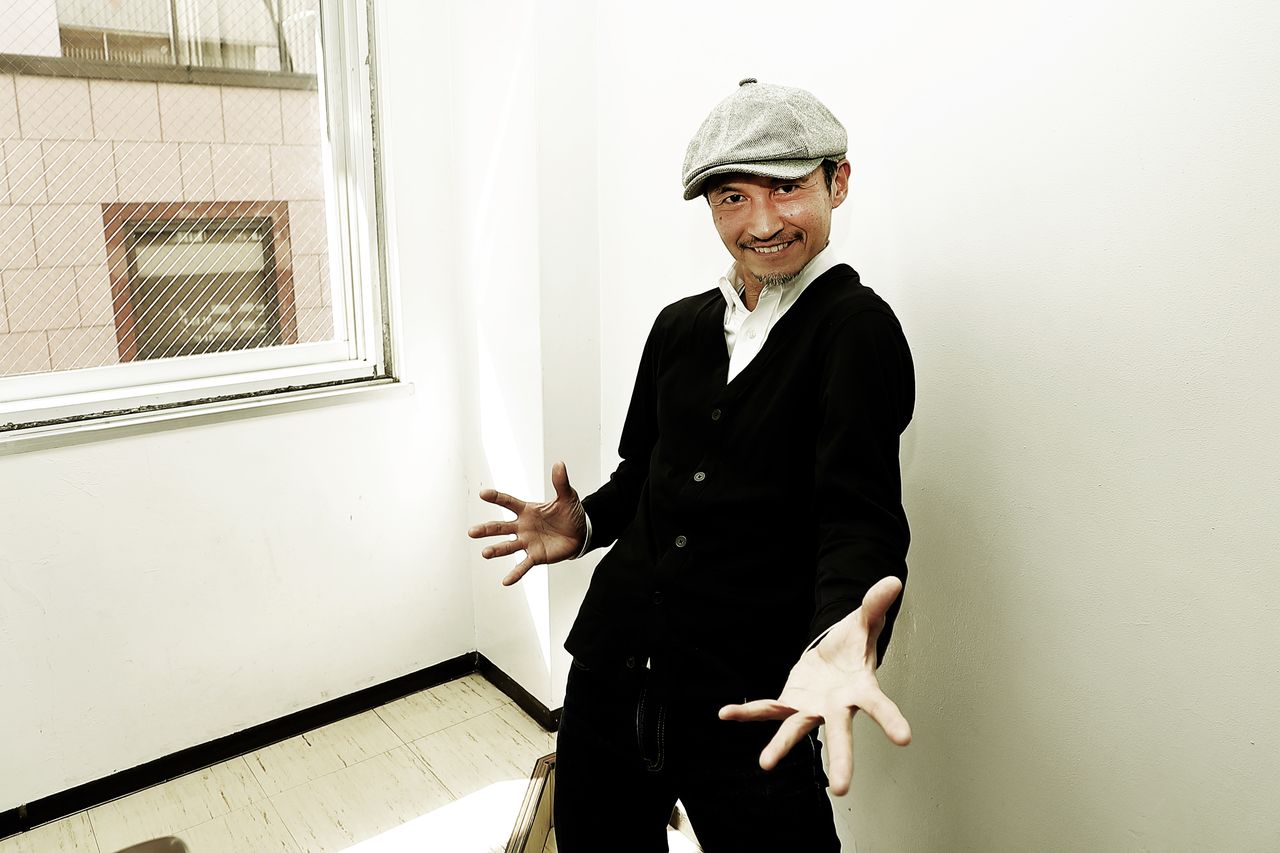 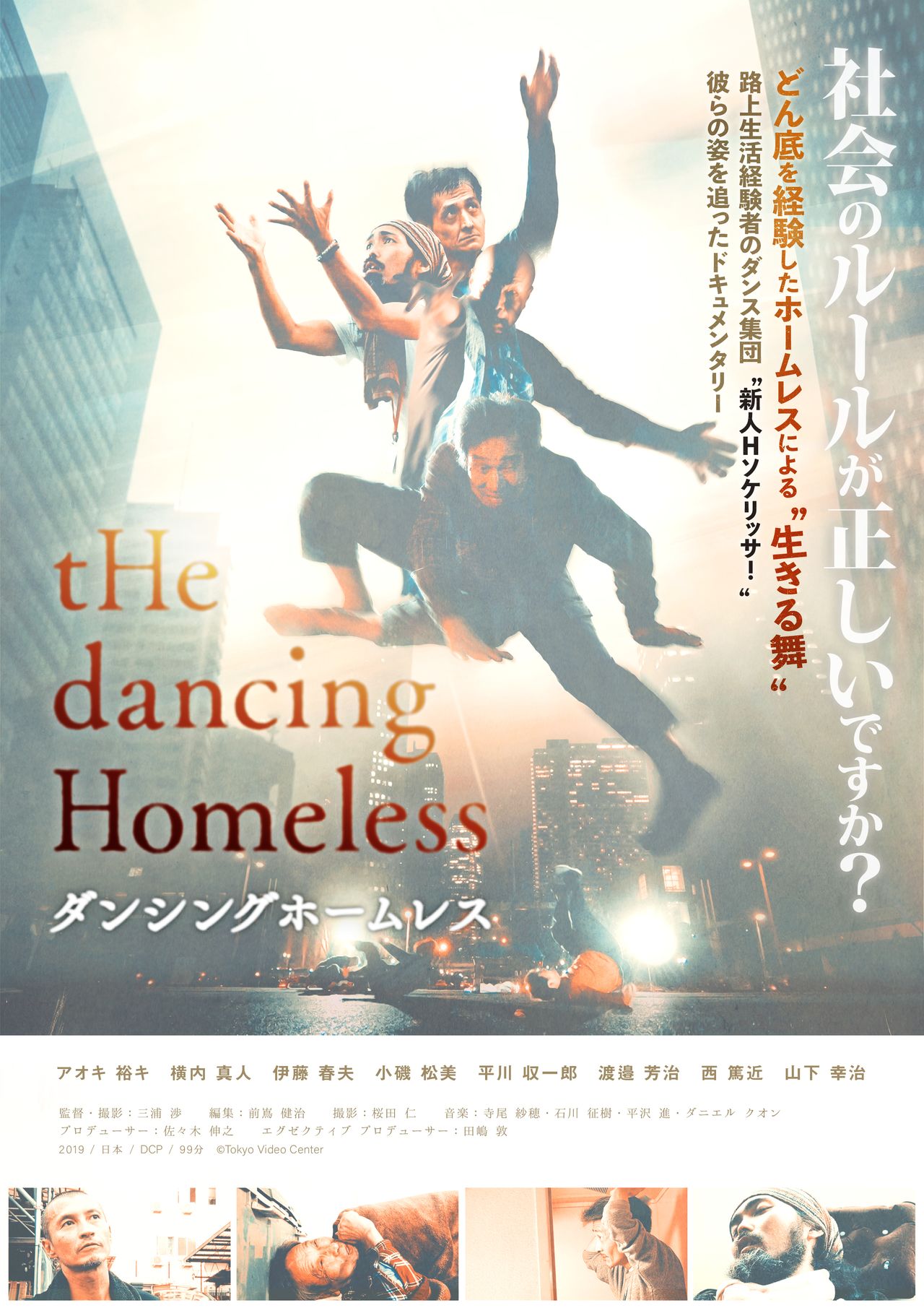