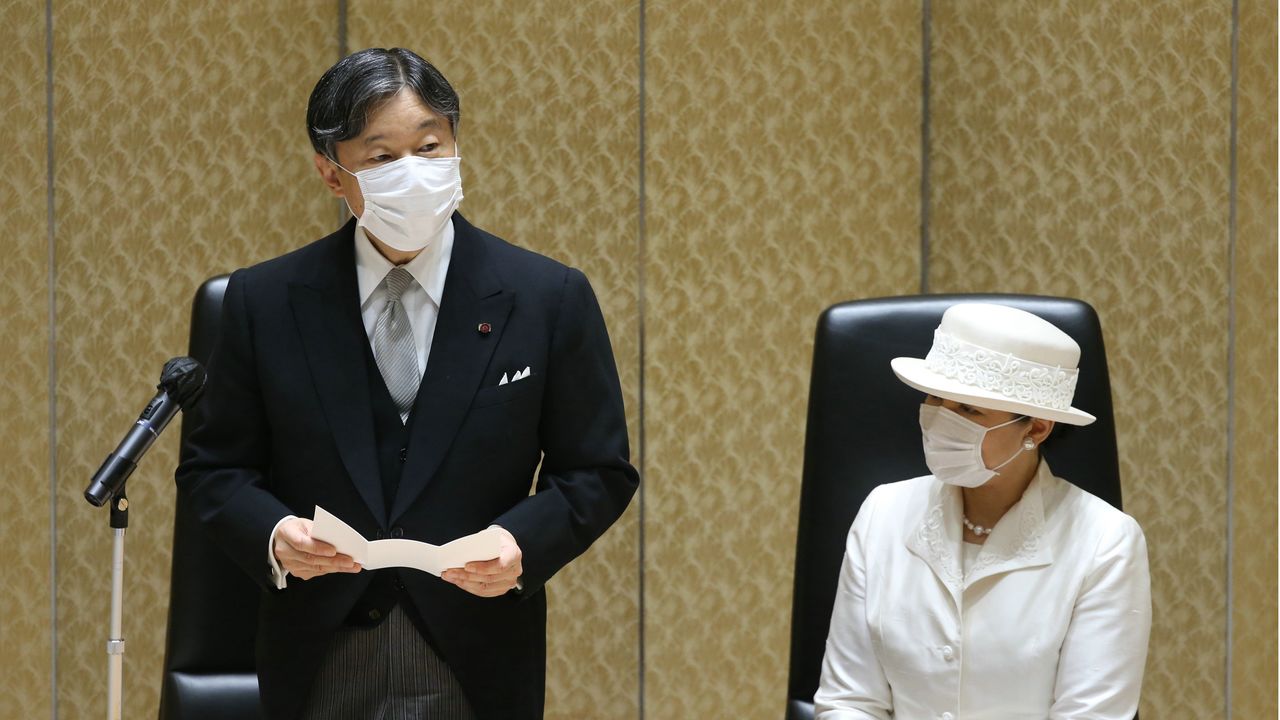 Emperor Naruhito’s Indirect Remarks on the Olympics and the Pandemic

Society Imperial Family Tokyo 2020 Aug 3, 2021
At a press conference on June 24, the grand steward of the Imperial Household Agency caused a stir by touching on the emperor’s and empress’s concern that the hosting of the Tokyo Olympics and Paralympics might lead to the further spread of COVID-19. What did the emperor intend to convey through the grand steward?

At a regular Imperial Household Agency press conference on June 24, 2021, Nishimura Yasuhiko, the grand steward of the Imperial Household Agency, responded to a question about the Tokyo Olympics and Paralympics by saying: “It is my conjecture that the emperor is concerned that the holding of the Olympics, for which he will serve as the honorary president, might lead to the spread of COVID-19 infections. Since he will be the honorary president, I hope that the Organizing Committee and other organizations involved will work together to take all possible measures to prevent the spread of infection during the Olympics.”

By using the word “conjecture” (haisatsu) to describe the view of the emperor, Nishimura was basing his comment on feelings he had “from firsthand experience of talking with His Majesty on a daily basis,” leading him to feel that “this was probably what the emperor was thinking.” But he added the explanation that he had “never heard such words directly from the emperor.”

The term haisatsu, a humble form of the noun “conjecture,” is unfamiliar to many people, but it is used by the grand chamberlain and the grand steward when inferring the emperor’s thoughts from his behavior.

Judging from the content of the press conference, when the grand steward interacted with reporters, he seems to have been expressing as accurately as possible the concerns held by the emperor regarding the spread of infections due to the Olympics. It is likely that he obtained Emperor Naruhito’s consent with regard to speaking about this issue at the press conference; he would not have acted on his own in a matter that could result in a political issue.

In response to Nishimura’s statement, the government insisted that the grand steward was only expressing his personal view. Prime Minister Suga Yoshihide stated: “My understanding is that Nishimura was stating his own opinion.” Many people found this response by the government to be too curt, though. Some politicians noted the need to abide by the Constitution, which forbids the involvement of the emperor in political matters. Some even said that expressing political opinions in the name of the emperor via such conjecture could be a serious threat to the emperor system itself. 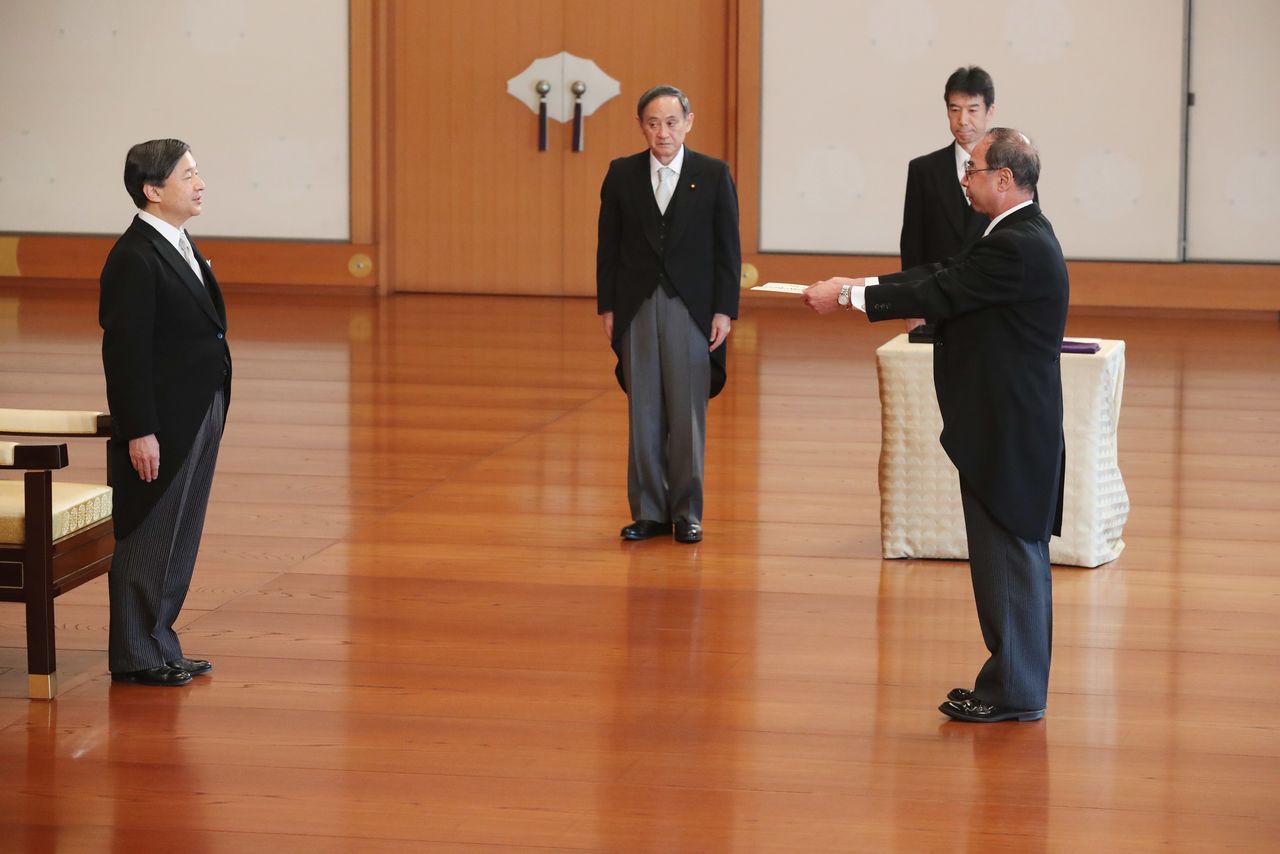 Clues to the Imperial Perspective

Why, then, did the Imperial Household Agency issue this “conjecture” just one month before the Olympics?

On June 22, two days before the press conference, Prime Minister Suga delivered a confidential report on national politics and other matters to the emperor. Although the content of the report is not known, it is likely that it provided information regarding the forthcoming Olympics. The emperor, of course, is not in a position to issue instructions to the prime minister regarding this event.

Having heard the report on the Olympics from the prime minister, the emperor may have felt some need to express his view via the Imperial Household Agency, thus leading to the “conjecture” expressed by the grand steward.

The key to understanding lies in the comments made by the emperor at the June 30 award ceremony for the Japan Academy Prize in Tokyo, which he attended together with the empress. This prestigious ceremony to recognize the outstanding achievements of researchers is presided over by the emperor every year. The ceremony in 2020 was not held due to the pandemic, so this year’s ceremony recognized the winners for both 2020 and 2021.

The comments made by the emperor do not vary greatly from year to year, but this time the content was quite different, with references to the COVID-19 pandemic accounting for around a third of his remarks. His speech at the event reflects his concern about the current situation and his hopes for an early resolution of the crisis.

The closing passage of Naruhito’s remarks at the ceremony, touching on COVID-19, began as follows: “Today, Japan and the rest of the world face a great challenge in the form of the growing number of novel coronavirus infections. To overcome this challenge, it is crucial for everyone, regardless of country, to work together with an even greater sense of unity.”

He went on to say: “The pandemic is not merely a medical problem. It has also presented us with challenges to our economy and society. It is academic endeavor that constantly gives us the ability to forge new futures for ourselves. Precisely at a time like this, when the entire world faces these challenges, it is important to mobilize the wisdom from various academic disciplines—medicine, the natural sciences, the humanities—and to lend one another our strength across national borders. I believe that in so doing we can overcome this difficult period to build a future that is full of hope.”

The most noteworthy part of this statement, I believe, was the emperor’s stress on the need for “everyone . . . to work together with an even greater sense of unity.” The fact that he used the expression “even greater” implies that Japanese citizens do not yet have that necessary sense of unity.

However, if the emperor had expressed his views directly in the form of a video message, for instance, it would have run the risk of being seen as a political issue, especially given the timing just ahead of the Tokyo Metropolitan Assembly election on July 4. It may have seemed safer to convey his message instead as the conjecture of the grand steward so that the emperor was not exerting his own influence.

It seems to me that the emperor’s message was that to unite the nation, the government should do more to explain to the public the reasons for holding the Olympics and to gain their understanding. The top priority must be to prevent the spread of infections. The people, too, need to be reduce the risk of infection while Japan welcomes athletes from around the world. To avoid canceling the event amid a sudden rise in infections, everyone needs to be united.

Reflecting on the Emperor’s Feelings

It may seem unusual that to convey the feelings of the emperor through the grand steward’s conjecture. However, I welcome that the emperor’s message could be conveyed to the people. In 2020, amid the pandemic, the emperor did not make an official statement for the six-month period from his birthday in February up to the remarks he made at the ceremony for victims of World War II in August. Some magazines published articles on the “silence of the emperor,” which they contrasted with the active role played by royal families in Europe in encouraging citizens during the health crisis.

Similarly, in 2021, the emperor had no opportunity to address the public during the period following his February press conference, despite the fact that Japan was soon to host the world’s largest international sporting event. As the honorary president of the Olympics, the emperor strongly hoped for an improvement in the current situation, which is marked by a rift between the government and the public with regard to hosting the games. This may have been one factor behind Nishimura’s conjecture.

The feelings of the emperor merely reflected a natural concern about the possible spread of infection through the Olympics and gave no impression of having any political content. If the remarks were interpreted as a political statement and forbidden as such, it would signify a miserably confined situation for the emperor.

As the Olympics open, Japan is in a season of natural disasters, as seen by the July 3 mudslide caused by heavy rain in Atami, Shizuoka Prefecture. The games are taking place while Japan finds itself in a difficult situation. At such a time, the government and the public should make “even greater” efforts to reflect on the concerns of the emperor regarding the safe holding of the Olympics while the pandemic continues.

(Originally published in Japanese. Banner photo: The emperor, accompanied by the empress, addressing the 110th and 111th awards ceremony for the Japan Academy Prize in Tokyo on June 21, 2021. © Jiji; pool photo.)