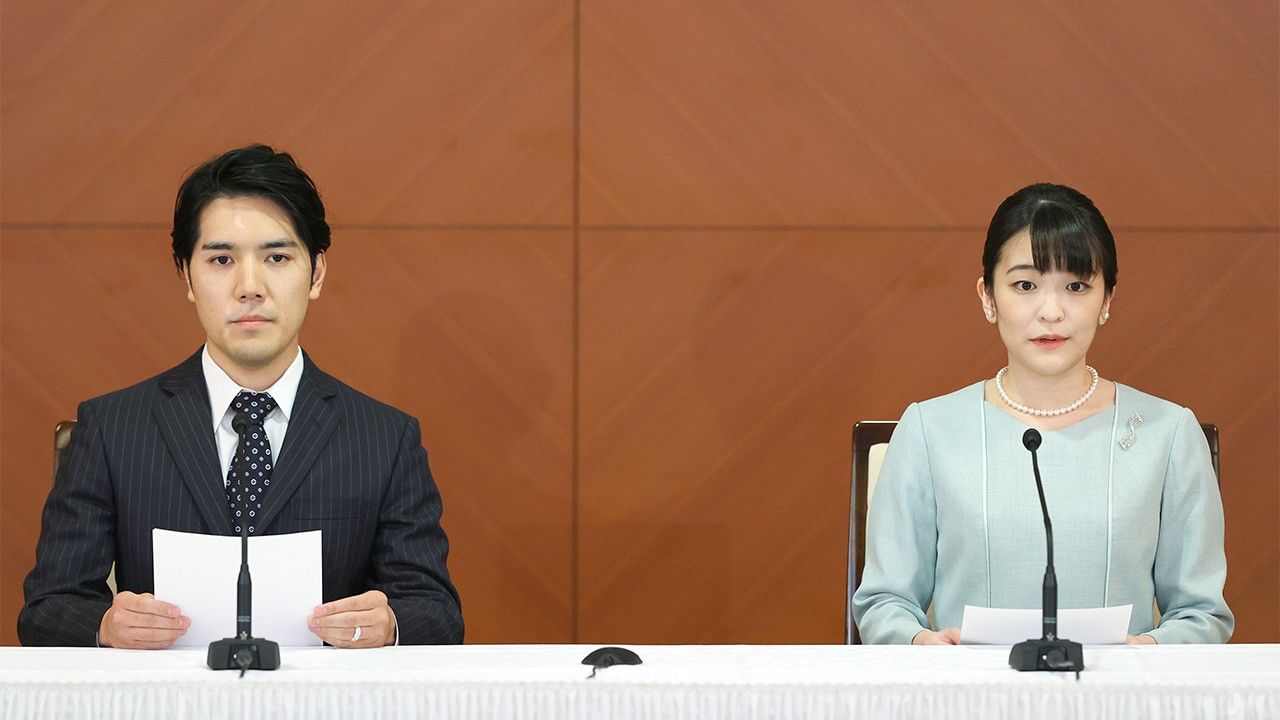 Marriage for Mako: An “Unprecedented” Wedding for an Imperial Princess

Society Imperial Family Oct 29, 2021
After more than four years of twists and turns, including severe criticism from some members of the public, Princess Mako has married Komuro Kei and left the imperial household. The crown prince and princess, her parents, have described the marriage as an “unprecedented” one, making it worth considering how will it impact the imperial family.

The New Couple Speaks Out

On October 26, Princess Mako and Komuro Kei filed their marriage paperwork, becoming wife and husband and officially removing Mako from the imperial family. Having become a commoner, Komuro Mako—who had been diagnosed with a stress disorder she said had been triggered by “erroneous information” in media reports—joined her new husband at a press conference on the afternoon of the same day. The two delivered prepared comments for about 10 minutes and took no questions from the assembled journalists, instead distributing written responses to questions that had been submitted in advance.

The former princess, speaking first, stated: “I understand that there are various viewpoints on my marriage to Kei. I must express my deep regret to those who have been inconvenienced by this state of affairs.” She went on, though: “Kei is an irreplaceable presence in my life. Marrying him is a decision I needed to take in order for us to live our lives with our mental health first in mind.”

Komuro Kei spoke next, opening his statement simply: “I love Mako. I want to spend the one and only life that I have to live together with the person that I love.”

Mako next divulged several facts that had been unknown to the general public so far. Regarding the reported financial trouble involving the Komuro family, namely the money his mother has been claimed to owe to her former fiancé, Mako said that she had been instrumental in urging the parties involved to resolve the situation. (In connection with this, her husband noted that talks were proceeding smoothly toward a resolution involving a monetary settlement, although his mother had suffered both physically and mentally from the turmoil, and even fears for her own safety at times.)

Kei’s study at a law school in New York, meanwhile, which some media channels had described as his “flight overseas” from troubles in Japan, had also been at her behest—she had urged him to “prepare a place abroad for us to live” well in advance of their marriage. According to her statement, her fiancé’s actions following their engagement had all been according to a plan of her making.

Mako went on: “Each time Kei’s acts were criticized as selfish decisions taken with no regard for my own feelings, this baseless speculation was picked up by the media as proven fact, and groundless stories took on a life of their own. This made me fearful; I have been pained and saddened by this treatment.” She mounted a fierce counterattack on the media entities that she described as deceiving the public with erroneous reports.

In closing, Mako stated: “From the bottom of our hearts, we hope to see society be a place where as many people as possible can live while caring for one another’s well-being.”

A Message that Came Too Late

It is hard to call this gathering, which lasted no more than 10 minutes and involved only statements from the couple, a proper press conference. As I watched it, though, I felt my own doubts about the developments to date melt away from the very beginning, when Mako confidently stated: “We have some things to tell you all today, which is why we arranged this event.” They were winning me over to their side.

At the same time, I felt that much of the drama we have seen concerning their relationship could have been avoided if they had only come together to speak to the public earlier through a press conference like this or some similar event. There may have been no way around the delay, though, given that until the day the two were formally wed she was still a member of the imperial family, subject to all the restrictions on her freedom to speak frankly to the Japanese people that this entails.

Ordinarily, the marriage of a princess of the imperial family would involve various official ceremonies. It seems that these were not carried out on the judgment of Emperor Naruhito and Crown Prince Akishino, her uncle and father, that the people would not be understanding of such undertakings. This decision was thus one taken with the people’s feelings in mind.

This does not mean, though, that the majority of Japan’s people were against the idea of wedding ceremonies taking place. Rather, the national sentiment was one of wanting to know the truth of what had taken place so far—of clearing up any misconceptions that might exist and understanding the grounding for Mako’s marriage to Komuro. It is most unfortunate that the public could only get the information it needed directly from Mako at this late date, after the marriage was finalized.

On the morning of October 26, Princess Mako (at right) meets with Crown Prince and Crown Princess Akishino and Princess Kako, her younger sister, who reaches out to embrace her. (© Jiji; pool photo)

The pain that Princess Mako suffered in connection with her engagement and marriage has shed fresh light on the restrictions on the rights of members of the imperial family. Mistaken media reports and the conjectures and harsh criticisms that can flash across cyberspace in an instant have been the main cause of this pain, but we must stop to ask ourselves whether there are really so many people opposed to Mako’s marriage.

I believe there are basically three types of response to Mako’s marriage: strong opposition, a desire to wish her the best based on respect for the freedom of members of the imperial family to marry whom they choose, and concern about the decision she is making. The first group may be vocal enough to get attention, but I do not believe it is anywhere near a majority view.

Look at any website and you can find plenty of comments along the lines of: “Is the public opinion really divided on this? You’ve got the overwhelming majority opposed to the marriage on one side, and the tiny minority who approve of it on the other. You can hardly describe this as a ‘divided’ opinion.”

It is clear from comments like this that people against Mako’s marriage see themselves as being in a solid majority, but is this actually the case? Recent opinion polls show that supporters of the marriage are the larger group. The October 6 Yomiuri Shimbun reported the results of a survey that had 53% of respondents saying the marriage was a good thing, with 33% disagreeing. An ANN survey carried out on October 16–17, meanwhile, had 61% of respondents stating that they “want to congratulate the couple” on their marriage, and just 24% not wanting to do so. In comparison with other marriages involving imperial family members, these opposing numbers may be relatively high, but they are certainly not majority numbers.

Despite this, the most vigorous opponents to Mako’s wedding have wielded influence well beyond their numbers, believing that most of the public are with them in their desire to cause the marriage to be cancelled. This has led them to publicly bash the couple with no regard for their rights in the matter. If the media have played a part in this with erroneous reports that these people believed unthinkingly, they have to answer for their role as well.

The Bride’s Parents Present Their View

In a statement on Mako’s marriage, her parents, the Crown Prince and Crown Princess Akishino, said: “This whole affair has had some impact on the imperial family, and we sincerely apologize to those who have been affected by it.” They also described the couple’s wedding as an “unprecedented” one “whose like has not been seen in the history of the imperial house.” This is hardly the sort of statement one would expect from the crown prince’s household on the auspicious occasion of a marriage of one of its daughters, and indeed, it indicates the anguish that Mako’s parents have gone through.

The “impact on the imperial family” that Mako’s marriage and the associated media uproar have had can be best described as a lessening of trust among a part of the public in the crown prince’s household. This is a most unfortunate development.

At the same time, by holding her press conference on the very day she formally left the family, speaking directly to the public and asking earnestly for their understanding, Mako may have succeeded in changing the minds of many of those people. Perhaps her unprecedented actions will, in the end, prove to be a salvation of sorts for her family. Our thoughts turn to how her younger brother Prince Hisahito has viewed the events of the past few years.