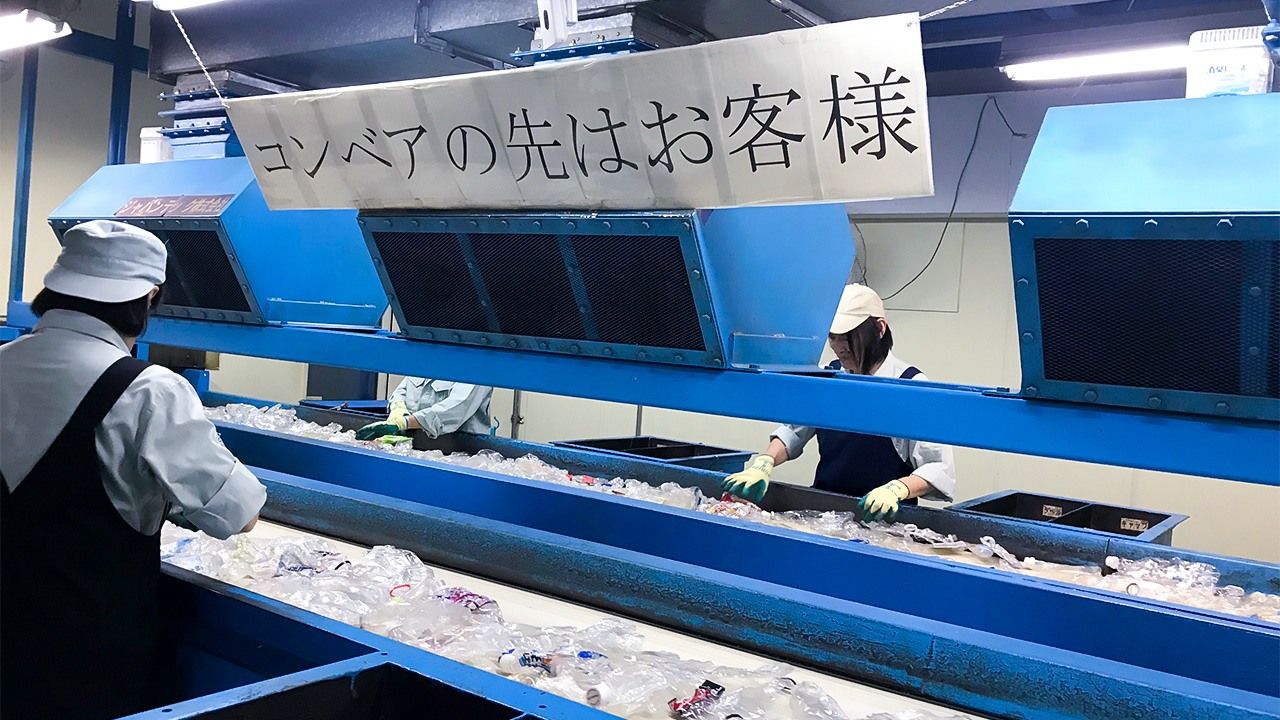 Economy Aug 19, 2019
Only 10% of Japan’s plastic drink bottles are recycled into new containers for products in the same industry. With more countries refusing to accept plastic waste, Japanese authorities and businesses are rethinking how to handle the growing mountains of trash.

Japan, like many industrialized nations, faces a garbage crisis. For years it shipped countless used plastic to China, the main global destination for recyclable materials. However, these exports included a substantial quantity of plastic contaminated by food and other waste that heavily impacted the local environment and health of workers charged with sorting the trash.

Looking to curb pollution at home, China in 2017 decided to halt all waste-plastic imports. The move caught Japan by surprise and sent it scrambling to find alternative destinations for its waste in regions like Southeast Asia. However, wary of becoming the new dumping grounds for first-world garbage, countries such as Malaysia and the Philippines have followed China’s lead and vowed to turn away shipments of plastic waste.

Prior to the ban, Japan sent around 1.5 million tons of plastic, around a sixth of the 9 million tons it generates annually, to China and Southeast Asia. In 2018 this shrank to 1 million tons, leaving Japanese authorities to find domestic sites to process and store the waste.

Without mitigating measures, Japan’s predicament will only worsen. In May of this year, the government joined with other parties to the Basel Convention, an international treaty controlling the movement and disposal of hazardous waste, to tighten restrictions on exports of mixed plastic waste, meaning that which has not been sorted and decontaminated for easy recycling. The new rules are slated to come into force in January 2021.

Japanese leaders are under increasing pressure to deal with the growing mountains of waste. One idea being considered is boosting the capabilities of incinerators to burn plastic refuse as fuel for generating energy. However, critics argue that the approach would increase CO2 emissions and call for more ecologically sustainable solutions.

Many experts advocate boosting recycling of soft drink bottles made from polyethylene terephthalate (PET) as a sounder tactic for dealing with the plastic waste problem. Japan already collects a vast amount of the PET containers it consumes via a network of recycling boxes in places like train stations, convenience stores, and neighborhood garbage pick-up sites. A high proportion of containers are turned into products like food trays and synthetic fibers for clothing. However, a mere 10% are reborn as new PET bottles. Many industry groups realize the need to better utilize resources and are now working to increase Japan’s “bottle-to-bottle” ratio as a way to decrease plastic garbage and petroleum consumption.

Suntory became the first major Japanese beverage company to move toward closed-loop recycling when in May it announced an initiative to use PET drink bottles made completely from old containers. It is partnering on the project with Kyōei Industry in Oyama, Tochigi Prefecture, a leader in plastic recycling.

Kyōei has developed a method for creating high-quality PET resin from recycled plastic bottles. The process starts on the sprawling lot of Japan Tech, a subsidiary in neighboring Kanuma, where countless bundles of compressed PET bottles sit in carefully stacked rows. 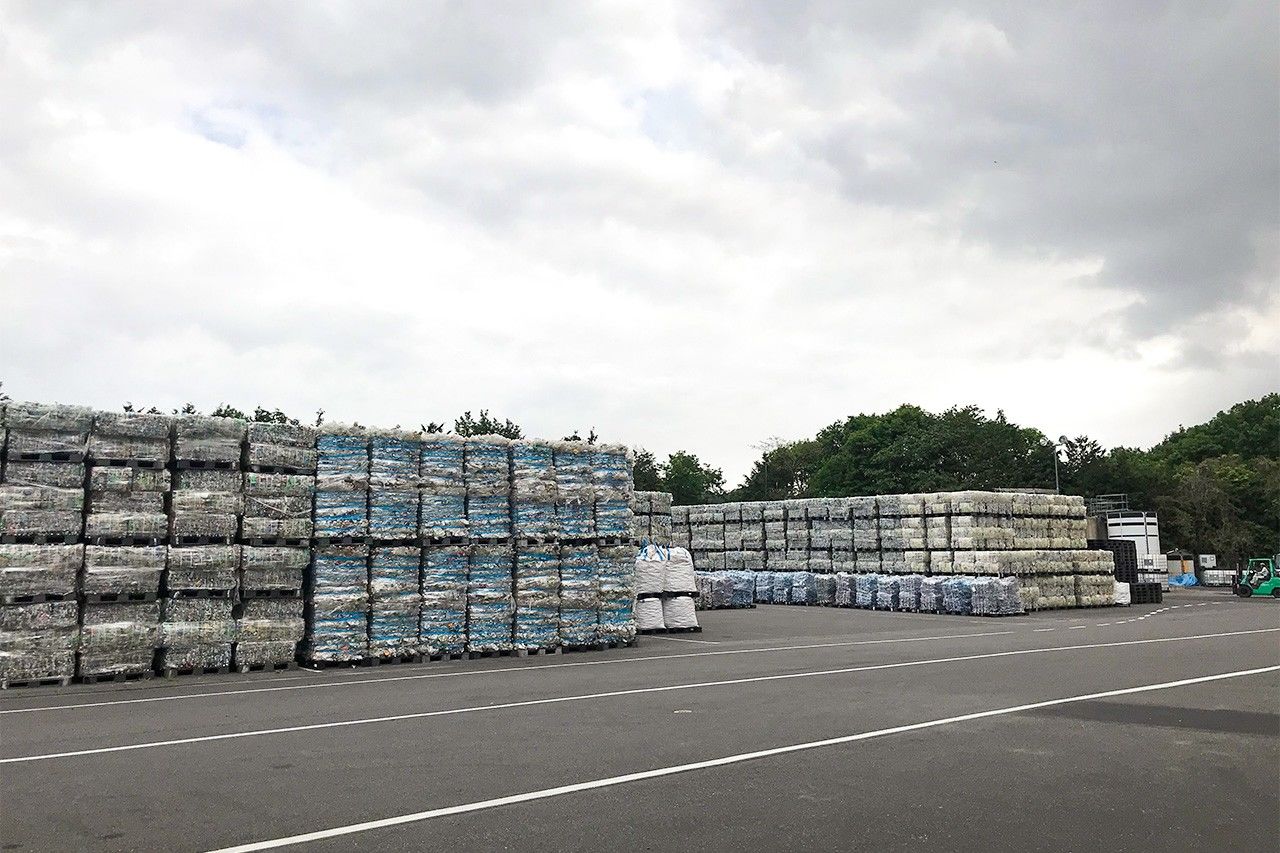 From the lot workers transport stacks of used bottles—the company receive some 2.5 million containers daily from around the country—to the processing plant. Inside is a whir of activity as a deluge of crushed bottles flow along a conveyor belt where a sensor rapidly identifies and separates unwanted materials, including colored containers and bits of metal. Human workers join in the process, giving the mass a final check before the next step.

Once sorted, the clear bottles move through a series of machines where they are pulverized, cut into flakes, winnowed to remove pieces of label, and then washed. Kyōei president Furusawa Eiichi emphasizes the importance of properly sorting and cleaning the plastic as any remaining dirt and impurities will reduce the quality of the final product, exclaiming that “mixed it’s just trash, but properly sorted it becomes a resource.” Indeed, there is no hint in the plant of the sort of smell ordinarily associated with waste material. 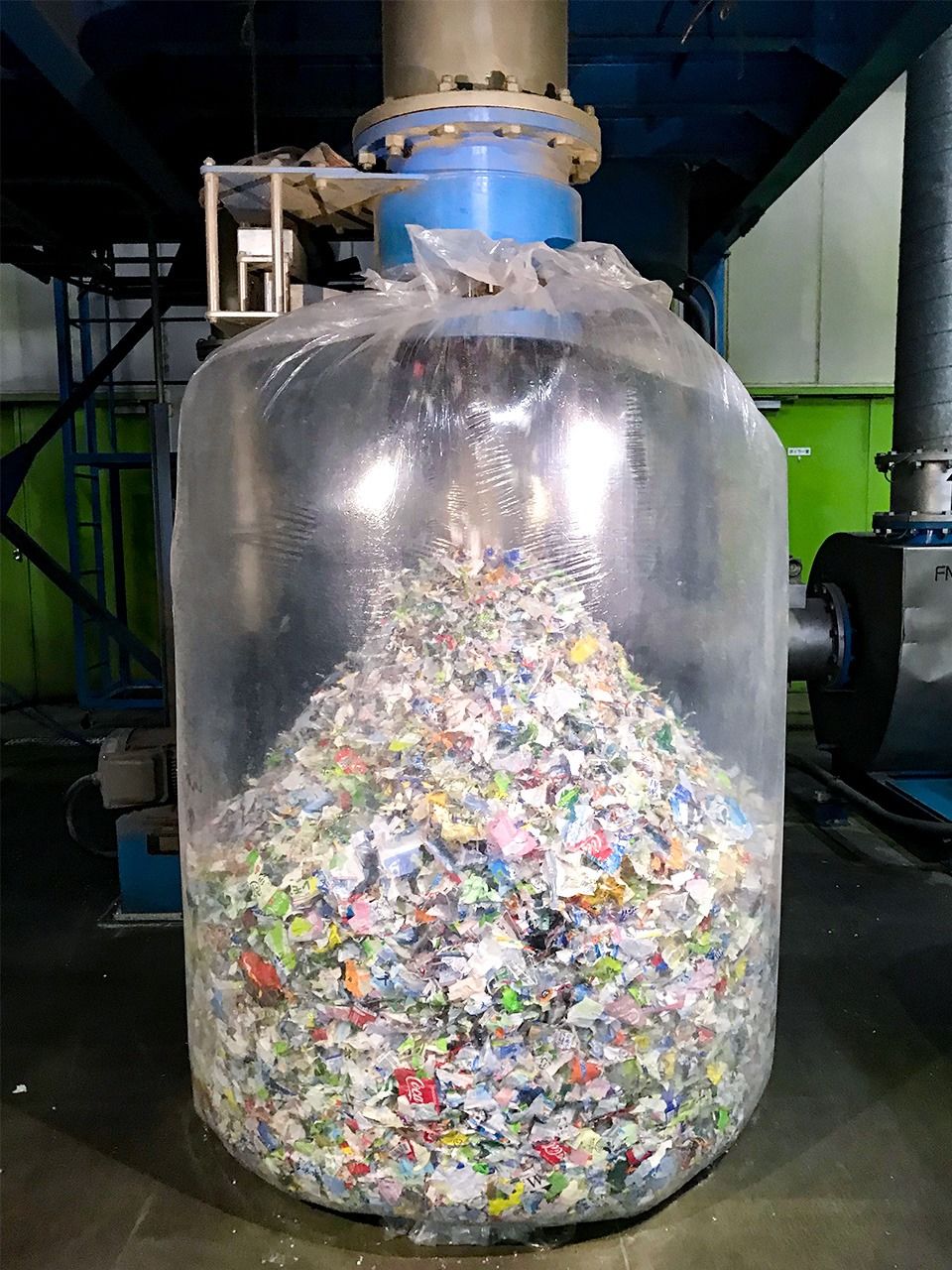 A large bag filled with shredded bottle labels. Blasts of air separate bits of labels from the PET flakes.

The finished PET flakes then go to Kyōei’s Oyama facility for final processing into pellets, the raw ingredient for new bottles. Heated in a vacuum chamber to just below the melting point—somewhere between 245 and 260 degrees Celsius—the plastic resin sheds any lingering moisture and impurities and regains its intrinsic viscosity. The resulting PET pellets are the same quality as new ones made directly from petroleum.

Furusawa insists that the PET recycling business offers potential for growth to companies that take the time to understand the polymer’s properties. He says that a firm can get started with a modest investment of ¥5 billion in a processing plant, but few entrepreneurs are drawn to the industry. “It’s a lot of work for small returns,” he states matter-of-factly, adding that it takes his firm 25 steps to create the same quality of PET resin as that made with petroleum. 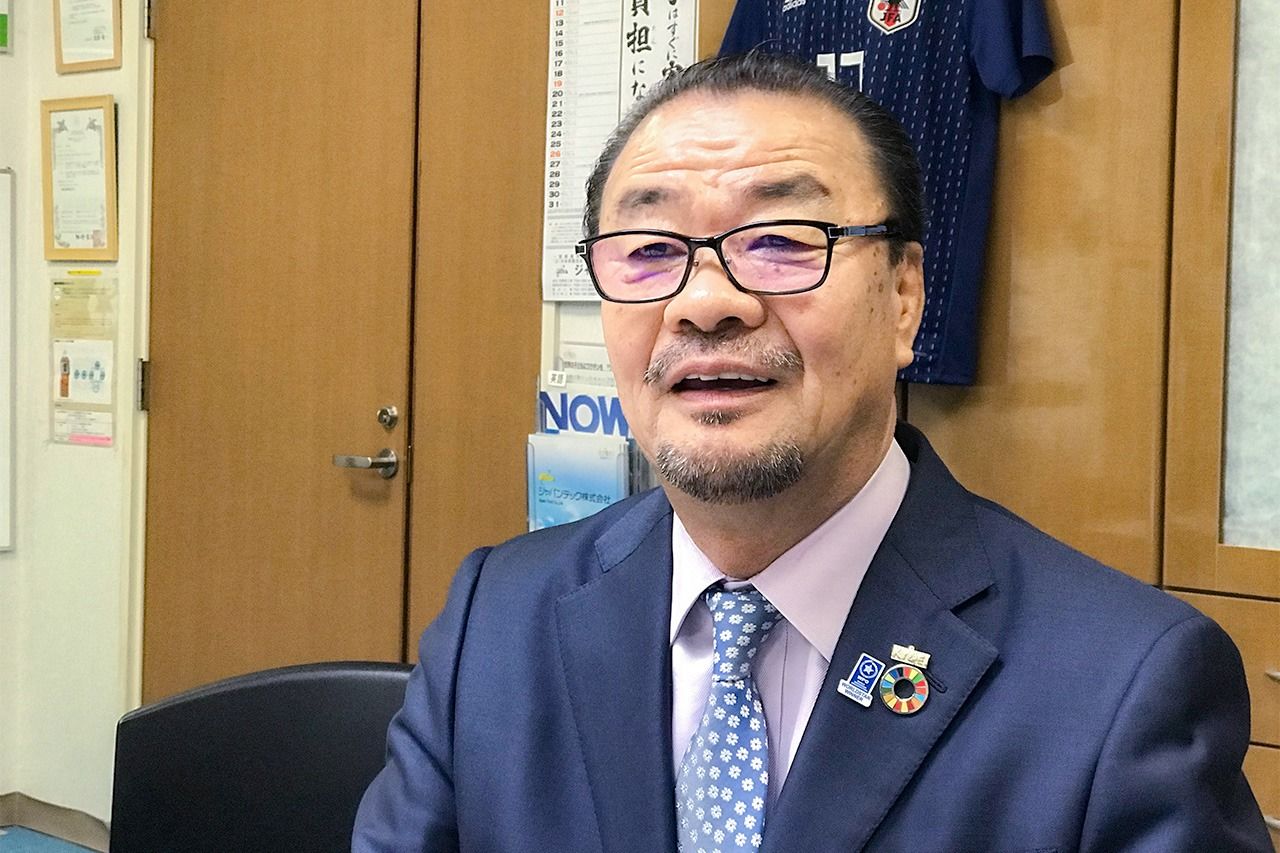 Furusawa’s experience in recycling PET bottles stretches back some 30 years to the dawn of the industry. In the mid-1980s beverage companies began replacing glass and metal containers with lightweight, easy-to-manufacture PET soft-drink bottles, and over the next decade use of the containers skyrocketed. Seeing a business opportunity, Furusawa, who already ran a recycling company, began around 1994 looking into methods for reusing plastic bottles.

Not long after that, in 1997, Japan added PET bottles to the Containers and Packaging Recycling Act, making it compulsory for local authorities to collect the plastic containers and requiring businesses to create recycling plans. Beverage companies invested in PET bottle recycling plants, but most struggled to keep the operations profitable. In 2001 an industry group turned to Furusawa for help, sparking his full-fledged entry into the PET market.

Tapping a Polymer Gold Mine

Experts have long contended that Japan needs to lessen its dependence on imported oil and natural gas to shield the economy from the deleterious effects of fluctuations in the cost of crude. However, up to now beverage companies have not seriously considered shifting from petroleum to recycled material as the main source for PET containers, since using oil was more efficient and demand for plastic in developing countries has meant there was money to be made in exporting empty bottles. Furusawa’s efforts to convince the Japanese government to push for broader use of recycled plastic also fell on deaf ears.

However, Furusawa stuck with his belief that the bottle-to-bottle model makes better economic and environmental sense than shipping plastics overseas. He spent years testing different technologies, and in 2006 he equipped Kyōei’s processing plant to turn out high-quality PET pellets.

The bottle-to-bottle movement garnered momentum after a 2009 study showed that manufacturing PET bottles from used plastic emits 63% less CO2 than using petroleum does. It received a further boost from a 2010 white paper on manufacturing by the Ministry of Economy, Trade, and Industry that touted the carbon-cutting benefits of recycling PET containers and the resource potential of Japan’s vast quantity of used plastic drink bottles.

It was around this time that Suntory decided to use Kyōei’s recycled PET resin for its products. Although consumer resistance to drink bottles made from recycled plastic was still high, the beverage maker, at the insistence of the head of the packaging department, pushed ahead with the initiative.

Suntory is working with Kyōei and other firms to develop new recycling methods and technologies and has won recognition for its efforts from industry bodies like the World Packaging Organization. In 2018 the firm opened a state-of-the-art recycling plant in Kasama, Ibaraki Prefecture, and aims to produce 100% of its plastic containers from a mix of bioplastic and recycled PET bottles—with no new fossil fuels involved—by 2030.

Europe currently reuses 40% of its plastic containers and the United States a mere 20%. Suntory hopes its efforts will inspire other nations to reduce plastic garbage with bottle-to-bottle recycling.