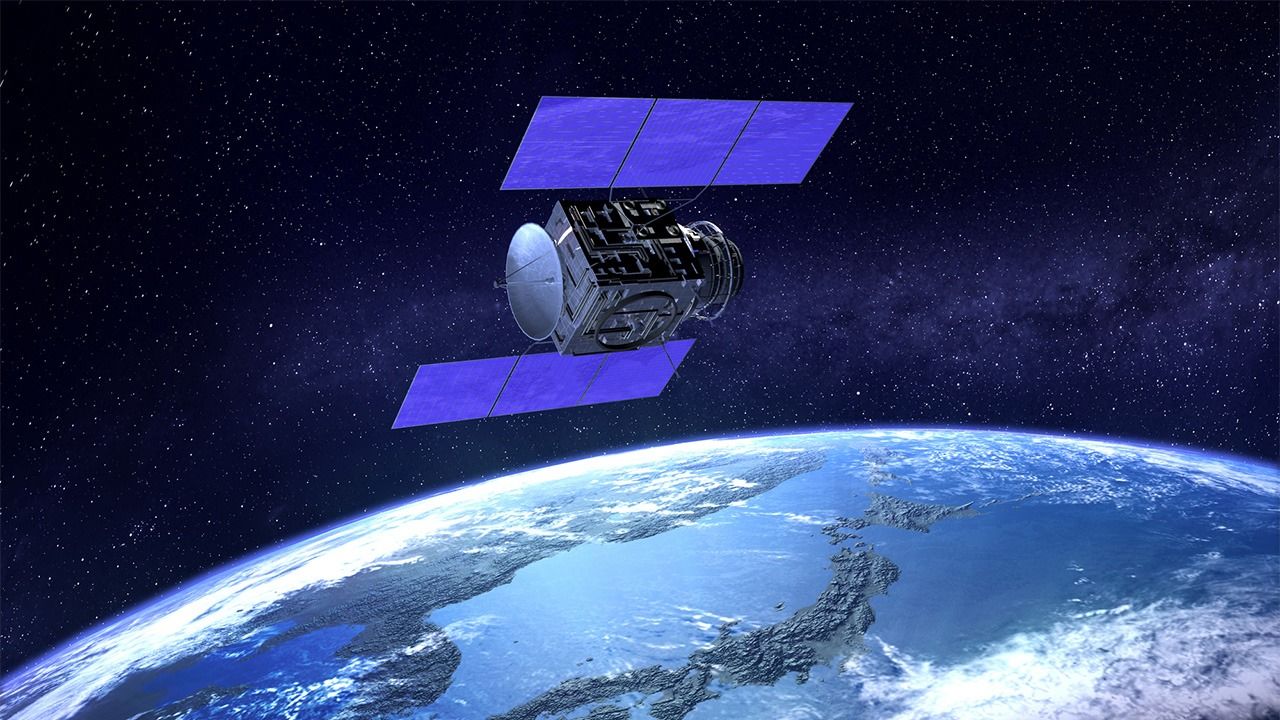 Japan Responds to the Sino-American Struggle for Space Supremacy

Politics Science Aug 13, 2019
With the launch of its Quantum Science Satellite, nicknamed Mozi, China took the lead in implementing quantum-encoded communications. In the first article of a series about China’s ambitious space program, space policy expert Aoki Setsuko explains the significance of this development. 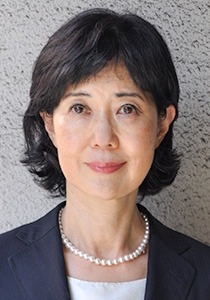 INTERVIEWER  We’re in an era of confrontation between the United States and China. And outer space is now becoming an additional arena for this confrontation, isn’t it?

AOKI SETSUKO  Yes. Three years ago there occurred an event that can be called the “Sputnik moment” of the twenty-first century.(*1)

INTERVIEWER  The original Sputnik moment was in 1957, when the Soviet Union beat the United States in the race to orbit the world’s first artificial satellite. The launch of the Soviet satellite, Sputnik 1, came as a tremendous collective shock to the Americans, who had cockily assumed that the Soviets couldn’t possibly win the race. You’re saying that something similar occurred three years ago?

AOKI  I’m referring to China’s launch of its “quantum science satellite,” or QSS, in August 2016. This was a first, and the United States has yet to match it. 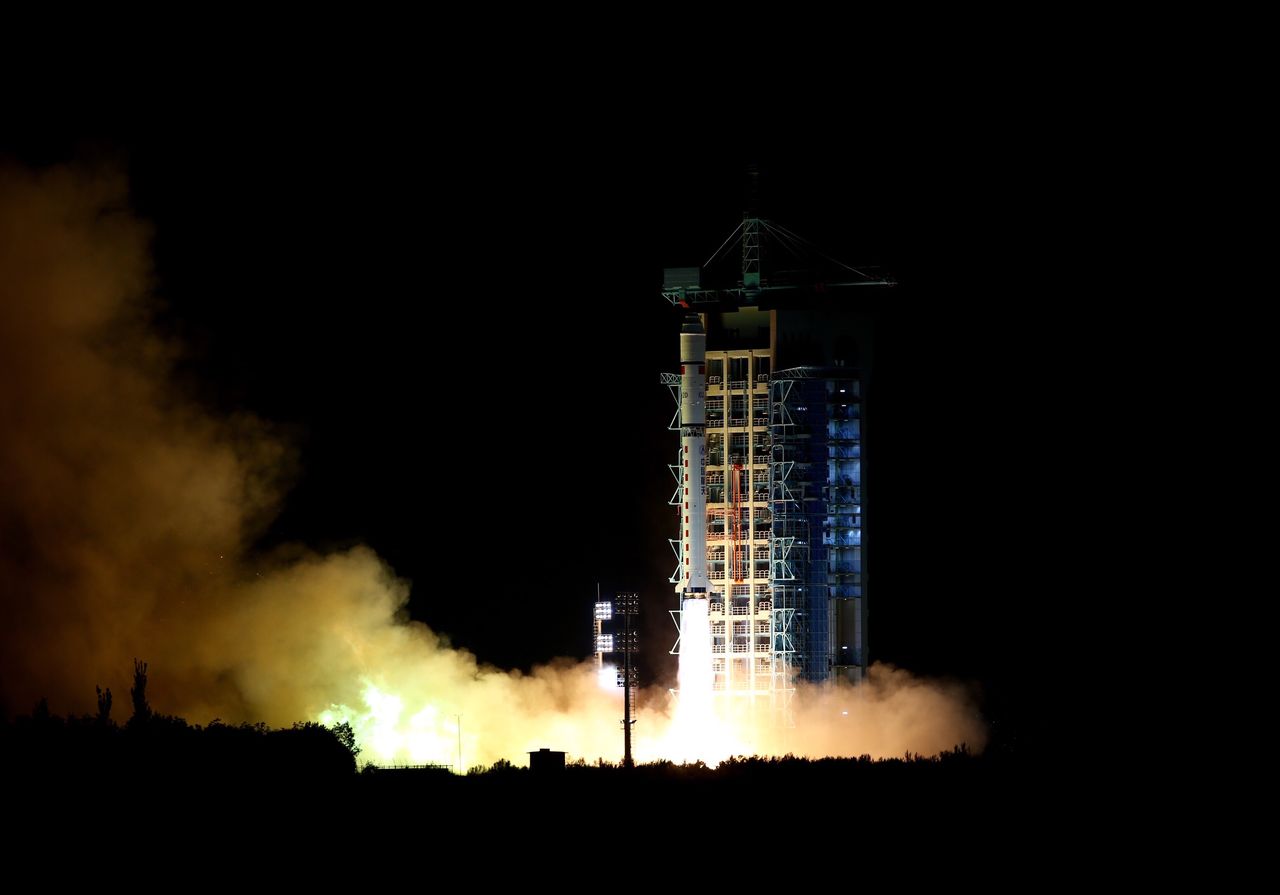 INTERVIEWER  Does this QSS have a name?

AOKI  It has been nicknamed Mozi, or Micius, after an ancient Chinese philosopher who advocated nonbelligerency and philanthropy in the age of the Hundred Schools of Thought.(*2) Leaving aside the question of what the authorities in Beijing had in mind when they chose this name, we can identify their aim in launching this satellite: They were testing the technology that will serve as the most crucial foundation for communication in the future. Success in this endeavor allows China to surpass the United States in a cutting-edge field.

More specifically, Mozi is serving as a tool for the testing and development of the basic technology to make quantum communications possible. It is the only satellite currently in space capable of exchanging quantum-encoded messages with base stations on Earth. With this achievement China has left America in the dust.

For the United States, this is comparable in seriousness to the Soviet success in the race to launch the first artificial satellite. And so it seems appropriate to call it the twenty-first century’s Sputnik moment.

INTERVIEWER  Has the United States responded?

AOKI  No, it has kept silent. And since grasping the significance of putting Mozi into orbit requires an understanding of difficult scientific concepts, there has been nothing like the widespread shock that followed the launch of Sputnik.

In fact, though, China has taken the lead in developing the technology best suited to the transmission of secret military and diplomatic information. To me it seems that Washington’s silence is eloquent.

INTERVIEWER  Is this really a technology that can protect the secrecy of communications?

AOKI  All the computers in the world working together could not crack the code. No kind of physical eavesdropping is possible. In the case of quantum communications, a message does not need to be encoded by applying encryption technology; according to quantum theory, the impossibility of cracking is inherent to the nature of the medium.

Distance is said to be a hurdle to the exchange of signals. Countries including Japan were experimenting in a quest to exchanged quantum messages between two points as far apart as possible. But then the Chinese amazed the world by suddenly succeeding in transmitting them between a satellite and the earth. And by orbiting additional satellites they can approach the goal of creating a quantum computing network that no outsider can break into.

Quantum code satellite  A satellite equipped with quantum-coded communication technology. This technology uses the nature of light particles to create a cutting-edge communication system transmitting messages that no computer can decode and that are theoretically impossible to tap. The Chinese claim that the technology can in theory provide a permanent solution to the issue of information security. And it is expected to be used for military and other purposes in the future.

A Space Program That Leads in Both Quantity and Quality

INTERVIEWER  Is it possible to read Beijing’s long-term intentions?

AOKI  I hope to take a close look at China’s strategies at a later point in this series of articles. Meanwhile, in both quantity and quality, China’s space program has not only surpassed Japan’s but has also been taking the lead over America’s in some areas, as seen in the case of Mozi. 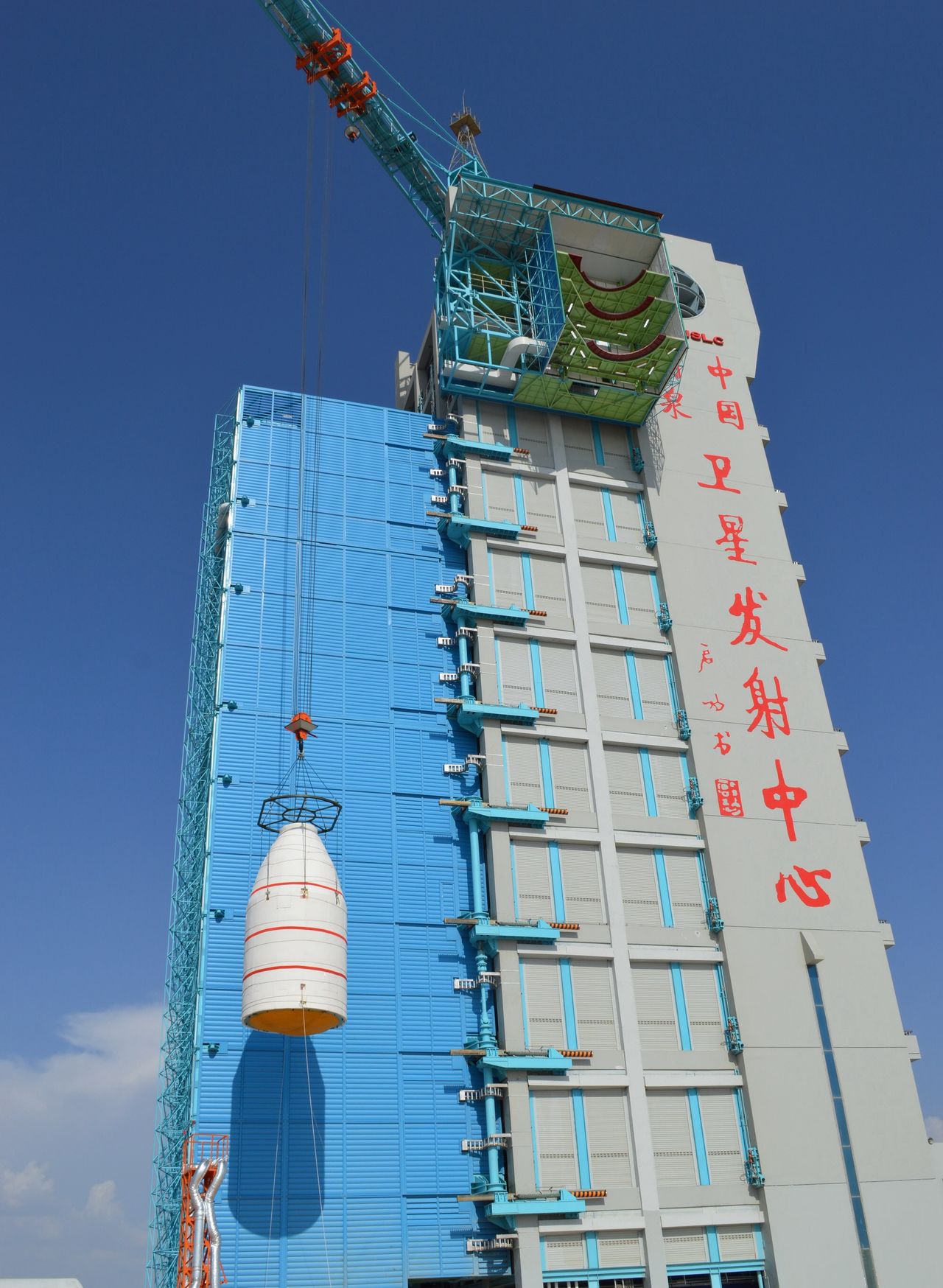 The Mozi satellite is prepared for launch at the Jiuquan Satellite Launch Center in Jiuquan, Gansu Province, in August 2016. (Photo courtesy Xinhua/Aflo)

INTERVIEWER  What does it mean for China to lead in quantity?

AOKI  One easy-to-grasp quantitative indicator is the number of satellites launched. In semiannual terms the Chinese took the lead for the first time in January–June 2012. And in annual terms they surpassed the United States to take first place with thirty-eight launches in 2018, while Japan had six. This is a gap beyond closing.

In qualitative terms, meanwhile, the Chinese excel in meeting and beating their own targets. China has published target dates for achieving various objectives in its white papers on space activities. As one can see from the subsequent results, there have been no delays in the program. In fact, the Chinese have been beating their own targets. China is the only country capable of doing so in its space program. Space development activities require complex, multidisciplinary designs, and it is normal for shortfalls and delays to occur. But China—and China alone—is an exception. For example, in their first space activities white paper, published in 2000, the Chinese set the goal of sending a human into space by the end of 2010; they accomplished this in October 2003.

Building Base Stations Around the Globe

INTERVIEWER  You mentioned quantum encoded exchanges between the satellite Mozi and base stations on earth. Are these stations in China?

AOKI  Actually, scientists in Austria and Italy have conducted successful communication experiments in which they have accessed Mozi from their own countries. And in order to transmit signals between earth and a satellite in a high-speed orbit, it’s necessary to operate multiple channels operating at various angles from different locations on earth. To accomplish this, the Chinese have had to establish base stations in places like Africa and South America.

INTERVIEWER  How has China managed to establish these multiple base stations on different continents?

AOKI  It has won permission to do so in exchange for building, launching, and managing geostationary satellites, such as remote-sensing satellites, for other countries. It launched a satellite for Nigeria in 2011, for Bolivia in 2013, for Laos in 2015, and for Algeria in 2017, and it is handling their management. Congo is expected to be added to the list this year.

China has also been adding new space situational awareness facilities in Africa and Latin America. SSA equipment is used to monitor the position and orbits of objects in space. This is an indication that the Chinese intend to challenge the SSA network put together by the United States and its allies.

INTERVIEWER  Alfred Thayer Mahan, author of a highly influential late-nineteenth-century work on the historical role of naval power, declared that a state seeking to rule the seas must secure access to ports.(*3) When the British Empire extended its reach to Asia, it took control of key ports like Colombo, Singapore, and Shanghai. Doesn’t what China is doing now seem a bit like a repetition of what the British Empire did in the past? Beijing is fully aware that it cannot achieve supremacy in space without access to base stations across the globe.

AOKI  Let’s consider what sort of competition will occur as countries explore “deep space”—Mars and other places beyond the moon. To put it simply, they’ll want to have a free hand in using space and putting things there. And if they seek to establish permanent human settlements, they’ll be competing for the freedom to choose where to locate them and what activities to conduct.

Few countries have the ultra-long-term vision for this competition. It comes down to a match between the United States and China, with the possible addition of Europe acting collectively, though its capabilities pale by comparison. Japan doesn’t have the intention of seeking first place in space, nor does it have the ability to do so. The best our country can do is perhaps to provide the capabilities we have to the United States for the best possible return and to use cooperation in space as a means of strengthening the Japan-US alliance.

(Originally published in Japanese on July 12, 2019. Banner photo: Illustration of a satellite in orbit. © MIyabi-K/Pixta.)

(*1) ^ The Sputnik moment occurred in October 1957, during the US-Soviet Cold War, when the Soviet Union succeeded in launching the world’s first artificial satellite, Sputnik 1. In response the United States stepped up its own space program, creating the National Aeronautics and Space Administration and subsequently undertaking Project Apollo.

(*2) ^ Mozi (Micius) was a Chinese philosopher who lived from around the latter part of the fifth century to the early part of the fourth century BC. He espoused pacifism, opposing the use of force to settle problems, and he called on people to eschew selfishness and seek to be charitable. His thinking, along with that of Confucius, was one of the major currents in ancient China’s “Hundred Schools of Thought.”