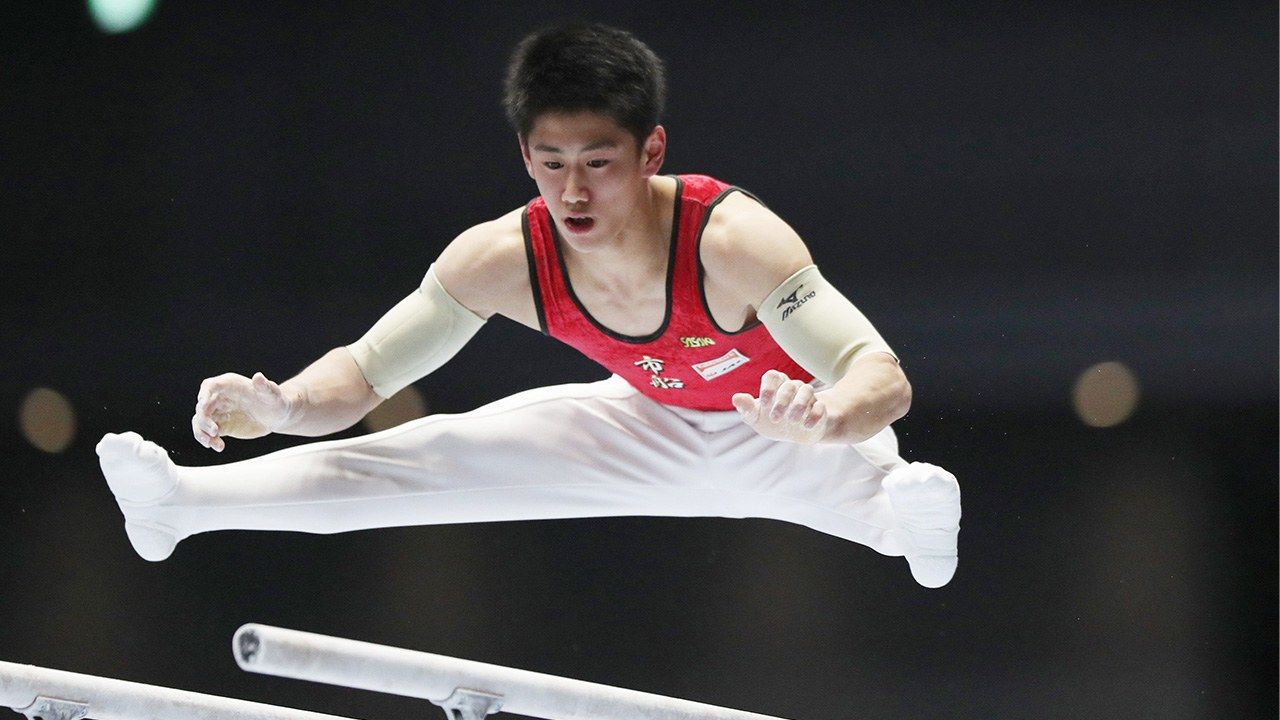 Tokyo 2020 Sports Feb 12, 2020
High schooler Hashimoto Daiki’s strong performance at the World Artistic Gymnastics Championships in Stuttgart in October has raised hopes that he might be a breakthrough star at the Tokyo Olympics.

Japan has excelled in Olympic gymnastics competitions, winning 98 medals—31 gold, 33 silver, and 34 bronze—more than in any other sport. Only Japan’s jūdō representatives boast more gold medals at 39.

However, dark clouds were hanging over the Japanese camp before last autumn’s World Artistic Gymnastics Championships in Stuttgart. Stars Uchimura Kōhei and Shirai Kenzō, both members of the 2016 gold-medal winning team in Rio de Janeiro, were struggling with injuries and had to drop out.

With Japan’s prospects looking bleak, Hashimoto Daiki stepped into the breach to make a high-profile international debut. He was the first male high school student to represent Japan in the competition since Shirai in 2013 and 2014.

In qualification, he was the top-scoring Japanese gymnast in his four events, particularly shining in the first of these, the pommel horse. Gymnasts in this event are required to continually swing their legs in circles while gripping the handles of the apparatus, with any loss of balance resulting in a fall. It demands high levels of concentration even for veterans and must have been especially nerve-racking for a high school boy making his first appearance on the world stage. And yet Hashimoto put in a superb performance for the 10,000 spectators at the Stuttgart arena. 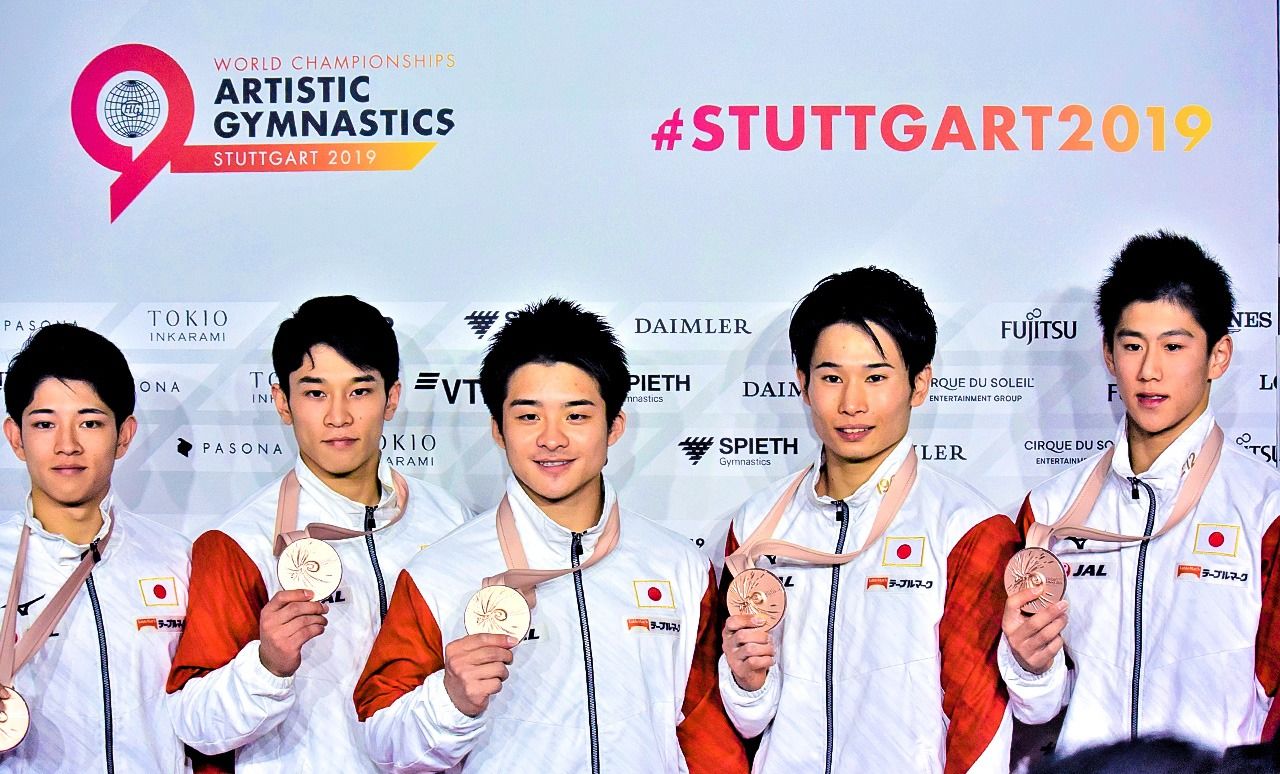 Hashimoto Daiki (right) displays his bronze medal with other members of Japan’s gymnastics team at the World Championships in Stuttgart. (Courtesy Yanai Yumiko)

Hashimoto is compactly built, standing 164 centimeters tall and weighing in at 54 kilograms. His efforts on the pommel horse, where athletes with long arms and legs are at an advantage, impressed the judges, and his score of 14.883 was world class. “I was so excited, I hardly felt nervous at all,” he later commented.

After excellent showings in the vault and horizontal bar, events he was originally scheduled to appear in, he logged the team’s highest score in the floor exercise as a replacement for Tanigawa, helping propel Japan to third in the qualification round.

In the final two days later, Hashimoto was the savior once more. He again appeared in four events, an exceptional promotion for a debut gymnast.

Under the rules of team gymnastics, in the qualifying stage, four out of a team’s five members take part in each of the events, but only the top three scores count toward the overall total, reducing the impact if one gymnast underperforms. In the final, however, only three members compete in each event and all their scores count toward the total, leaving no room for mistakes. Such high stakes placed considerable pressure on the high schooler Hashimoto.

Yet he responded brilliantly. On his specialty, the pommel horse, he kept his toes perfectly pointed as he performed, while in the vault he successfully completed a challenging Lopez move. He also shined on the horizontal bars, landing a flawless Cassina somersault, a difficult move he started including in his routine in the summer.

Despite its uncertain start, Japan claimed the bronze medal behind Russia and China. Coach Mizutori Hisashi, a gold-medal winning member of the Japanese lineup at the 2004 Athens games, was elated with Hashimoto’s performance. “He exceeded my expectations, and won himself international recognition,” Mizutori beamed. “He’s become an essential member of the team for Tokyo 2020.”

Still Work to Do

Hashimoto Daiki was born in 2001 in Narita, Chiba Prefecture. He started gymnastics at the age of six, following in the footsteps of his two elder brothers. Dogged by injuries during junior high school, he made limited progress. However, he made huge strides in his technique after he entered Funabashi Municipal High School, which has a strong sporting tradition. On starting his senior year in 2019, he rapidly improved to the point that he was tapped for the World Championships.

Gymnastics is scored through a combination of difficulty and how skillfully competitors execute their routines. Hashimoto’s strength is in winning points for the technical accuracy and aesthetic quality of his execution.

He shows the influence of the emphasis on “beautiful gymnastics” shared among coaches at the junior level in Japan. Hashimoto’s personal focus on aesthetic execution is also clear. He regularly says that his ideal is to perform even simple moves properly and avoid sloppiness.

One month after his thrilling international debut, he won the Individual All-Around Super Final in Takasaki, Gunma Prefecture, in November. At 18 years and three months, he was the youngest winner of an individual all-around title since Nishikawa Daisuke took the NHK Trophy in 1988 and went on to appear in the Seoul Olympics the same year. 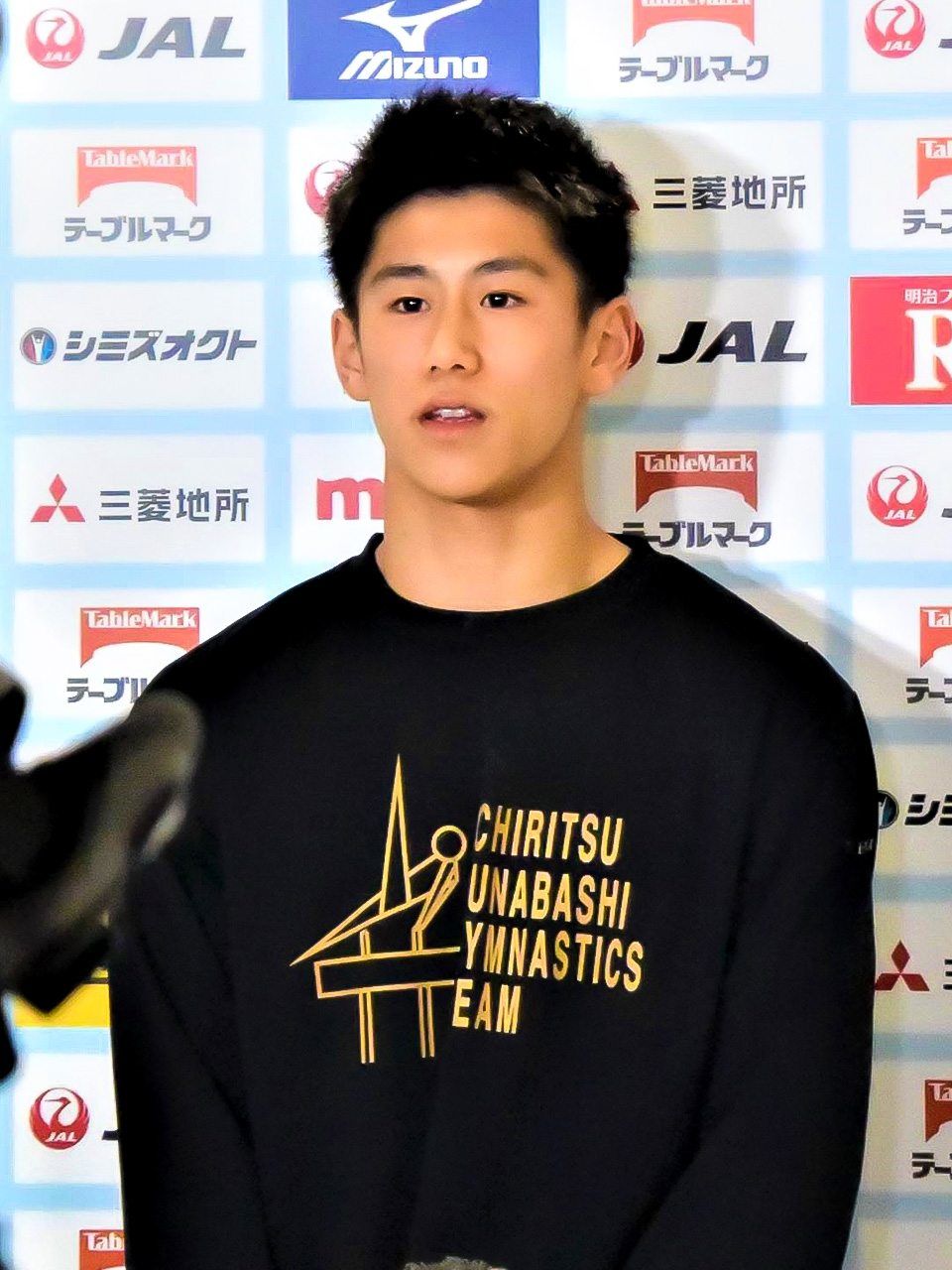 The result secured Hashimoto a spot at the Individual All-Around World Cup in spring 2020, where another title would book his ticket early to the Tokyo Olympics.

But Hashimoto is keeping a realistic view about his chances. While he was the only gymnast to score over 86 in Takasaki, the result would only have earned him sixth place at the World Championships. He knows he has to improve his performance if he hopes to have a serious shot at winning gold in Tokyo. “I need boost my score by at least another point to be competitive on the international stage,” he says. “I’m aiming for around 87.5 at the World Cup.”

Nonetheless, the emergence of a new hero is good news for those in the Japanese gymnastics world looking ahead to Tokyo in 2020 and Paris in 2024. Hashimoto is already a World Championships medal winner at 18. Shirai won the floor exercise gold at the World Championships in 2013 in his second year of high school, but he is not an all-rounder like Hashimoto. Uchimura’s superb record includes consecutive golds in the individual all-around competitions at London in 2012 and Rio in 2016, but even he did not win his first medal, at the Beijing Olympics in 2008, until he was in his second year of university.

Nikita Nagornyy, who won all-around and team golds at Stuttgart, praised Hashimoto saying that the young competitor has a sparkling future as an all-rounder. Japan hopes his potential can blossom sooner rather than later in front of home crowds in Tokyo this summer.