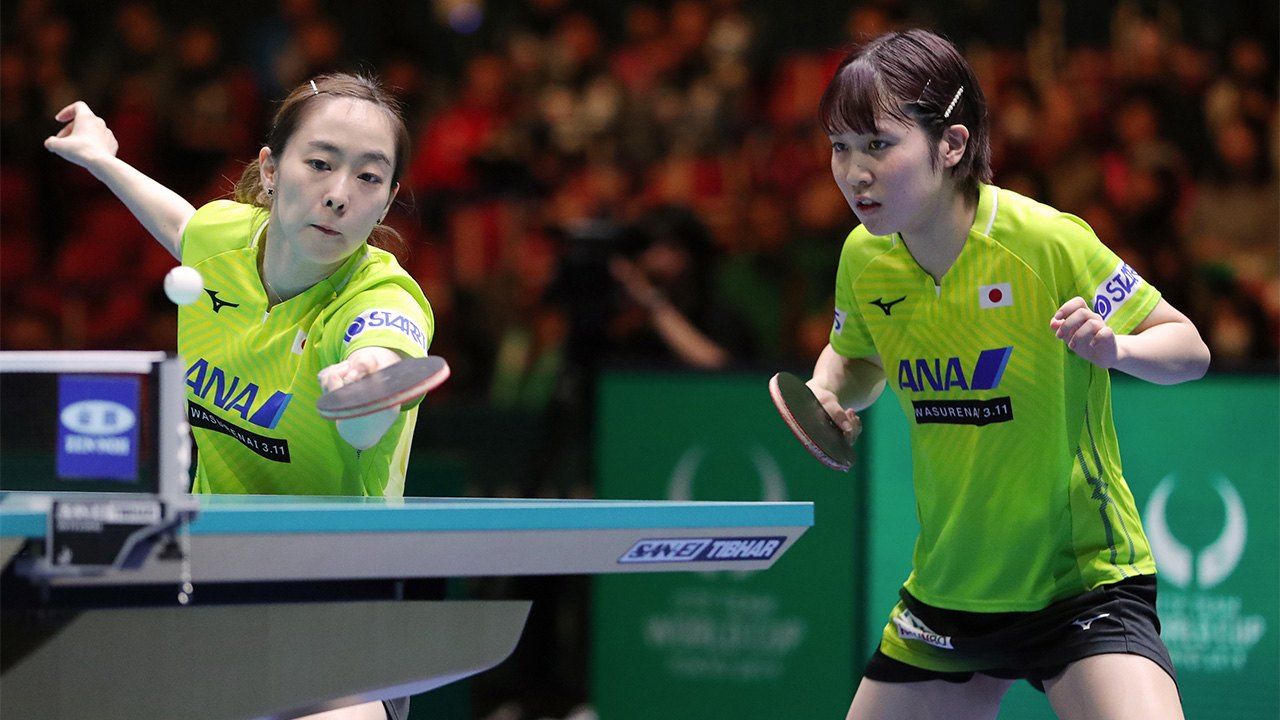 Tokyo 2020 Sports Feb 26, 2020
After the most grueling selection process ever, the athletes who will represent Japan in women’s table tennis at the 2020 Olympic Games have been announced as Itō Mima (19), Ishikawa Kasumi (26), and Hirano Miu (19). Itō and Ishikawa will compete in the singles events. Hirano joins them in the team event, where her ability to excel in the face of adversity will be key to the team’s success.

There will be a total of five table tennis events at the Tokyo Olympics: men’s singles, women’s singles, men’s team, women’s team, and mixed doubles. Japan has won medals in the women’s team event two Olympics in a row. At the 2008 Beijing Olympics, which was the first to hold a team table tennis event, Japan just missed the podium, placing fourth. Japan then went on to win silver at London in 2012 and bronze at Rio de Janeiro in 2016. While table tennis is a stronghold of China, which has won gold at the last three Olympic games, at the upcoming Tokyo Olympics, Japan has a real chance of knocking China out of the top spot. 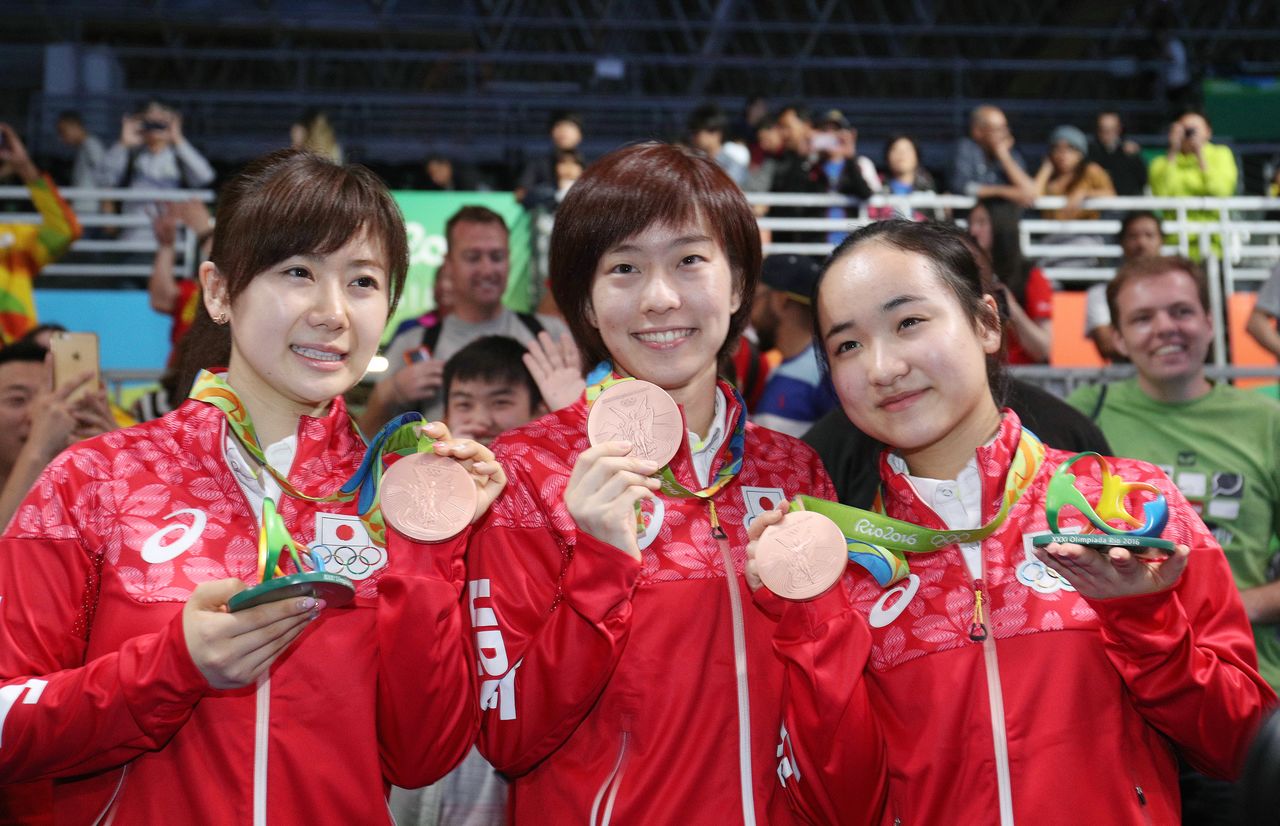 One reason that Hirano Miu is seen as being key to the Japanese team’s victory is that at the Tokyo Olympics the doubles matches will be more important than they have been in the past.

The team event includes one doubles match and four singles matches, with the first team to win three matches being declared the winner. While this rule itself remains unchanged, in the past, doubles pairs were not formed until the third match of the competition, whereas at the Tokyo Olympics, the doubles match comes first.

Under the selection criteria of Japan Table Tennis Association, in both men’s and women’s table tennis, the two top-seeded players in the world in January 2020 get to go to the Olympics. In December, Hirano lost the final of an international tournament in Canada to Ishikawa Kasumi and finished the tournament in third place on match points. Hirano therefore missed out on the chance to represent Japan in the singles competition, and will appear only in the team event. It is believed that in the team event the Japanese side will deploy ace player Itō Mima (third in January’s world ranking) in the singles matches and have Ishikawa (ninth) and Hirano (eleventh) play one doubles and one singles match each.

When her addition to the Olympic team for the team event was announced on January 6, Hirano said that she wanted to make a contribution to the team by working with Ishikawa and Itō to win gold. Behind this short comment, Hirano’s frustration at having narrowly lost the contest to choose Japan’s singles competitor was evident. You could sense that Hirano wants to channel this frustration into the team event. Her determination to harness all her emotions to help her win gold is clear.

Japan’s top player Itō will play in the mixed doubles and the women’s singles events before heading into the team event. The intense pressure of the competition means that Itō will not be able to completely avoid the effects of physical and mental fatigue. Ishikawa also needs to work her way up the singles ladder before going into the team competition. Hirano, on the other hand, who will only compete in the team event, and who will begin her Olympic run with the doubles match, will be able to head into the game in peak condition. In this match, where she is likely to be paired with Ishikawa, delivering reliable wins and coming out on top is a condition for winning a gold medal.

The team’s head coach, Baba Mika, is also hopeful: “In the women’s doubles, Hirano, who was paired with Ishikawa, won bronze at last year’s Asian Championships, and also did well in the World Tour. Hirano has performed well in singles matches too, beating a Chinese athlete to win the Asia Championships in 2017. Of the three women, I believe Hirano is most able to achieve our goal of defeating China.”

Building on the Frustration of Rio

Hirano is remembered for the way she channeled her disappointment at being made reserve in the 2016 Rio de Janeiro games into dramatic progress the following year. This earned her the nickname “Hurricane Miu.” In Rio, the immense pressure to which Hirano was subjected meant that she was not able to be open with her feelings. She travelled to the Games as support, accompanying Fukuhara Ai, Ishikawa, and Itō, the same young age as her. Working hard behind the scenes carrying bags, picking up balls, and serving as a hitting partner for Itō, Hirano always put her team first and put on a brave face while in the company of her teammates. While it was difficult for Hirano to see her three teammates shed tears of joy after winning bronze in the team event, she still congratulated them with a smile.

“If I let my guard down, I would have burst out in tears. I just smiled as hard as I could,” says Hirano. This was a punishing experience for a 16-year-old.

However, Hirano managed to convert her frustration into positivity. After returning from Brazil, she released all her bottled-up emotions. She changed her style from one of waiting for the opponent to make a mistake to one of pre-emptive attack, and was the first Japanese athlete to win the Women’s World Cup in October 2016. Hirano also became serious about weight training, and turned a somewhat chubby physique into a toned and powerful athlete’s body. In December 2016, Hirano was named the Breakthrough Star of the Year by the International Table Tennis Federation, and in the January 2017 Japan Open, she beat Ishikawa in the finals, making her the youngest woman ever to win the tournament, at just 16 years, 9 months of age.

Taking Down Chinese Athletes One at a Time

Hirano continued to go from strength to strength. At the 2017 Asian Table Tennis Championships in China, she exhibited a winning streak that made the Chinese take her very seriously. Hirano beat Rio Olympics gold medalist Ding Ning (the world’s top-ranked player), number-two Zhu Yuling, and number-five Chen Meng, going on to win the tournament for Japan, a feat unwitnessed since Koyama Chire—a naturalized Japanese athlete hailing originally from China—won the tournament in 1996. In June, Hirano won a bronze medal at the World Table Tennis Championships, in a feat not achieved by a Japanese woman in 48 years. Hirano’s unleashed power after bouncing back from the disappointment of her Rio experience was something else.

Japanese table tennis players are competing at a higher and higher level. Evidence of this was on display at the 2020 Japan Open held the week after the team for the Tokyo Olympics was announced. There Itō won three consecutive matches in the women’s singles before being eliminated in the quarterfinals, and Ishikawa also was eliminated at the finals. Hirano lost in her fifth match to an opponent who was still of high-school age. The winner of the Japan Open was 19-year-old Hayata Hina, who had missed out on being selected for the Tokyo Olympics. The fact that no singles title at this tournament was won by a player who will compete at the Tokyo Olympics, male or female, shows just how exhausting the year-long 2019 elimination race was—as well as hinting at the depth of Japan’s table tennis program.

The Tokyo Olympics is the prize for those who manage to survive the grueling elimination race. Here’s hoping that we will see Hirano at her best again, delivering a long-awaited gold medal for Japanese table tennis.