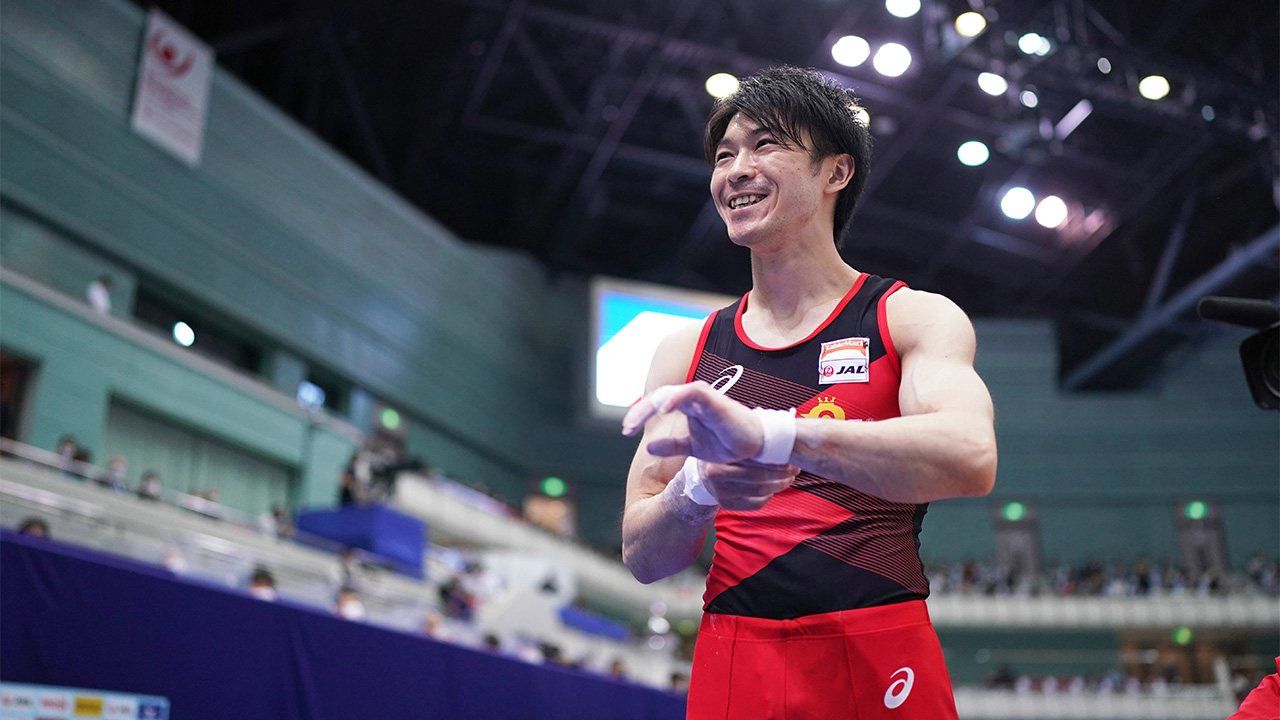 Sports Tokyo 2020 Jul 16, 2021
Olympic gymnastics champion Uchimura Kōhei will not compete in the all-around competition at the Tokyo Games, focusing instead on the horizontal bars. Although the five years since winning double gold at the Rio Olympics have been difficult for the aging Uchimura, he remains determined to live up to his reputation as Japan’s gymnastics king.

Since his Olympic debut at the 2008 Beijing Games, gymnast Uchimura Kōhei has all but reigned over the individual all-around competition. Tokyo, his fourth Olympics, will be a different story. Uchimura will not take part in the six-apparatus event, and will instead compete as a specialist in the horizontal bar. Having battled injuries in recent years, he is looking to add one final gold medal to the three he already has and solidify his reputation as Japan’s gymnastics king.

It will be odd to see Uchimura perform on just the horizontal bars rather than vying for a third straight Olympic all-around gold. Uchimura is intensely focused on the event, as he is for any competition. Speaking to the press, he said that his routine was short, less than 60 seconds, but that ”I’ve poured everything into that minute and it’s now up to me to pull it off.”

Uchimura has had a strong Olympic run, medaling in each of the three games he has attended. To date, he has won seven medals—three golds and four silvers—the most of any Japanese athlete still competing. Other than a silver in the floor exercise at the 2012 London Olympics, they have all come in the individual and team all-around. Tokyo will be a chance for Uchimura to cap his legacy with a gold in the horizontal bar. 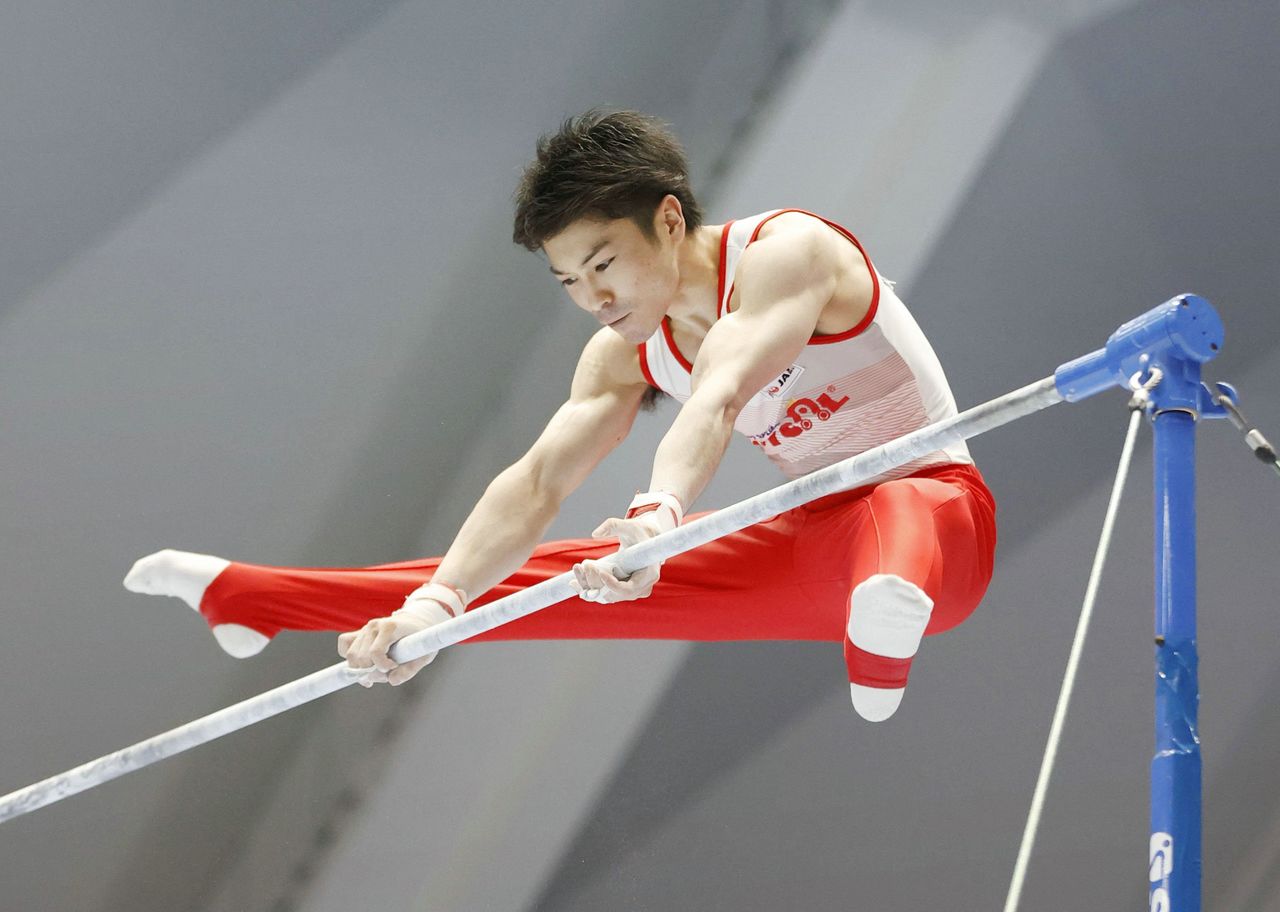 Uchimura Kōhei performs on the horizontal bar on June 6, 2021, at the All Japan Artistic Gymnastics Championships, held at the Takasaki Arena in Gunma Prefecture. His score in the event earned him a trip to the Tokyo Olympics. (© Jiji)

He is set to join legend Ono Takashi as the only other Japanese gymnast to appear in four consecutive Olympics. Ono reached the mark at the 1964 Tokyo Games, and Uchimura has acknowledged the parallels with his predecessor. At 32, Uchimura is just a year younger than Ono was. He is similarly known for his prowess on the horizontal bar—Ono was a two-time Olympic champion in the event—and as one of Japan’s most celebrated athletes. There is also the fact that Uchimura’s fourth Olympics will also be in Tokyo.

Perhaps the greatest parallel is the pairs’ deep commitment to their sport. Uchimura touched on this while reflecting on his accomplishment, saying that “it’s hard to describe just how difficult it is to qualify for four Olympics. There’s no way I would ever been able to do it if I didn’t love gymnastics with all my heart.”

Prior to the 2016 Rio de Janeiro Games, Ono and other members of the 1964 squad called on the Japanese gymnastic team at their Tokyo training camp to wish the athletes good luck. Uchimura said he had the opportunity to speak with Ono during the visit, which he described as a deeply moving experience. Just five years later, Uchimura is now set to cement his reputation alongside Ono as one of Japan’s greatest gymnasts of all time.

Uchimura’s dominance of the individual all-around competition began at the 2009 World Championship in London and continued to the Rio Olympics. The six-title streak, however, would come to an abrupt end in 2017. Uchimura started the long road to the Tokyo Games on a positive note with his announcement that he was turning professional, the first Japanese gymnast to do so, but had to withdraw part way through the World Championships in Montreal after injuring his left ankle on the vault. It was a devastating turn of events.

His injury woes would continue the following year when he again hurt his ankle, the right one this time, on the vault. The timing could not have been worse, occurring at the Japanese team’s training camp ahead of the World Championships in Doha. Determined to compete, Uchimura heavily taped his ankle, but ultimately withdrew from the all-around competition, the vault and floor exercises being more than his leg could withstand. He would, however, find a degree of consolation in winning silver in the horizontal bar.

More challenges were yet to come. In 2019, he struggled with pain in both shoulders while competing at the All Japan Artistic Gymnastics Championships and bowed out in the qualifying round. It was the first time since making his Olympic debut in Beijing that he failed to qualify for the national team.

Uchimura realized that the physical demands of his long gymnastics career were starting to catch up with him. The pain in his shoulders was intense. “Everything from the neck down was agony,” he described. After winning two golds at Rio, his previous confidence began to waver. “I ran right into the age barrier. There was intense pressure to win, and this ultimately took a toll on my body.” 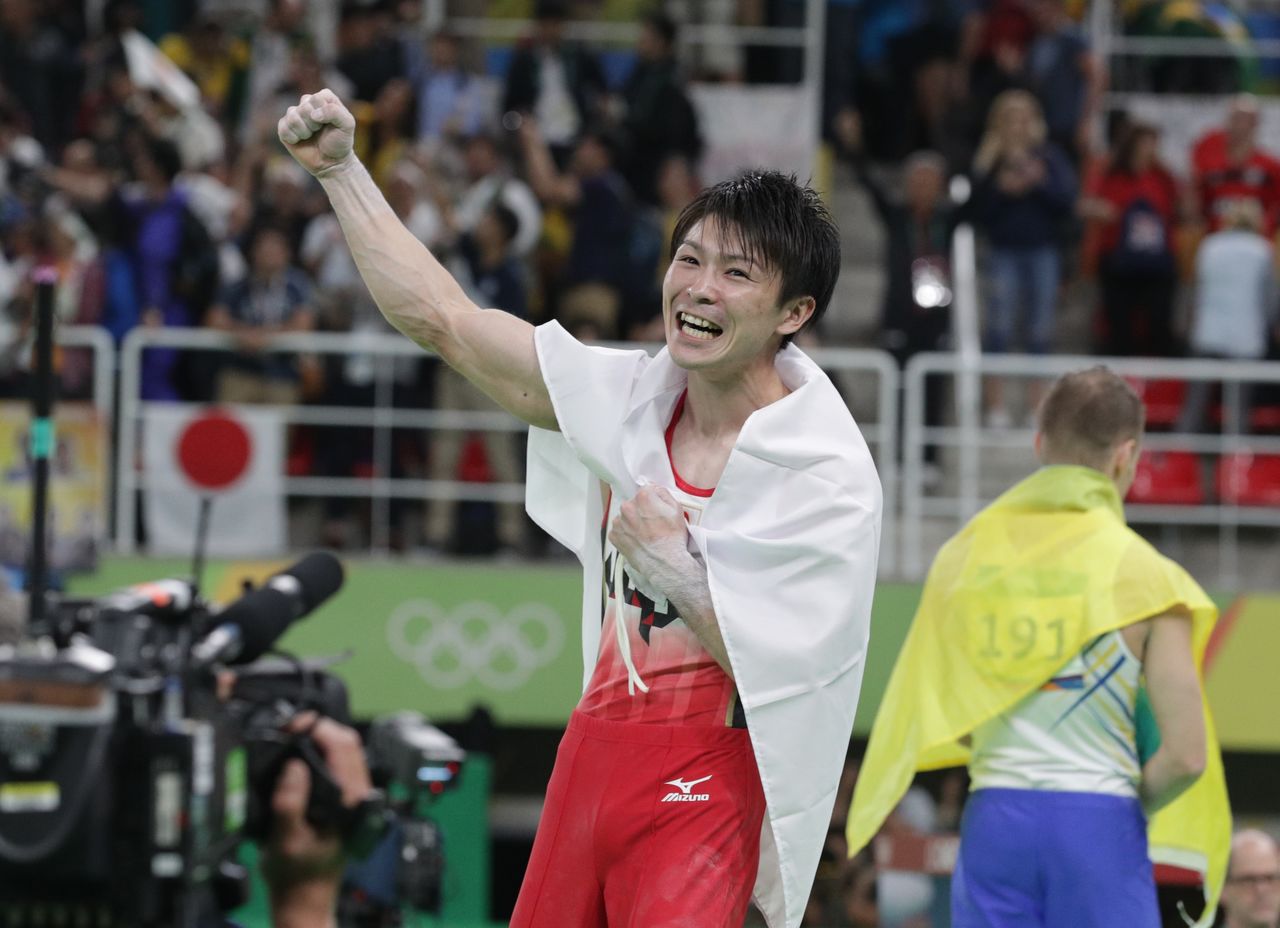 The emotional strain was equally severe. In the summer of 2019, Uchimura described his hopes of making the Tokyo Olympics, then still scheduled to take place in 2020, as “a dream.” Faced with the possibility of having to watch the sporting spectacle from the sidelines, Uchimura made the tough decision to quit the all-around competition and instead focus his attention on competing in the horizontal bar. For someone who had dominated the all-around for so long, it was a bitter decision to make. To Uchimura’s surprise, though, he found it freeing. “The strange thing was that once I committed to the horizontal bar, the pain in my shoulders went away as if by magic.”

Uchimura would still need to earn a spot on the Olympic squad. Competition for the lone horizontal bar slot was heated and came down to the wire. At the qualifying event in June, Uchimura battled against a talented field and eventually edged out Yonekura Hidenobu, who specializes in the vault, by a razor-thin margin on a tie-break point.

After stamping his Olympic ticket, Uchimura reflected on the trials of the last five years. “It was smooth sailing for me starting in 2008, when I first started leading the gymnastics team. Everything from practice to competitions went as planned. After Rio, though, it all fell apart. That was a difficult period, but I’ve put it behind me now.” 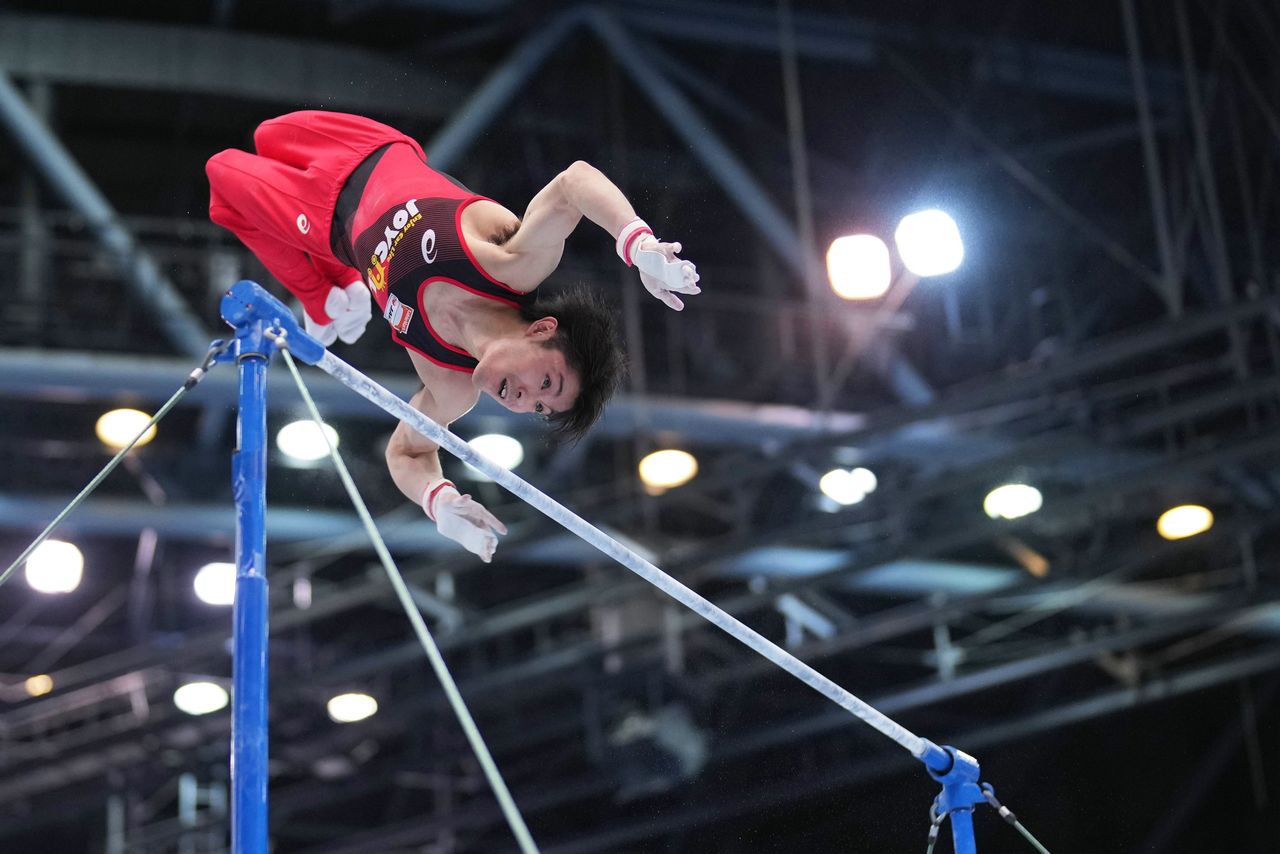 Uchimura performs at the NHK Cup in Nagano on May 16, 2021. His routine included some of the most difficult elements, including the H level Bretschneider, a double-twisting double tuck over the bar, and G level Cassina, a somersault with a full twist over the bar. (© Jiji)

It has taken incredible willpower and determination by Uchimura to remain at the pinnacle of the gymnastics as long as he has. Looking back over his career, the chance to vie for Olympic gold in his home country has to be particularly meaningful for him. As would be expected, he has his sights set on more than just medaling.

“I’m getting closer to performing my routine just as I envision it” said Uchimura. “Now it’s just a matter of timing everything for the Olympics. I’ve come this far, and whatever the final outcome is, my heart and mind are set on putting in a perfect performance.”

Everything Uchimura has endured and worked for over the last five years will play out in that one minute he is on the horizontal bars. The world will be watching to see if Japan’s gymnastics king will again don his crown.

(Originally published in Japanese. Banner photo: Uchimura Kōhei flashes a smile after finishing his horizontal bar outing at the NHK Cup on May 16, 2021. © Jiji.)