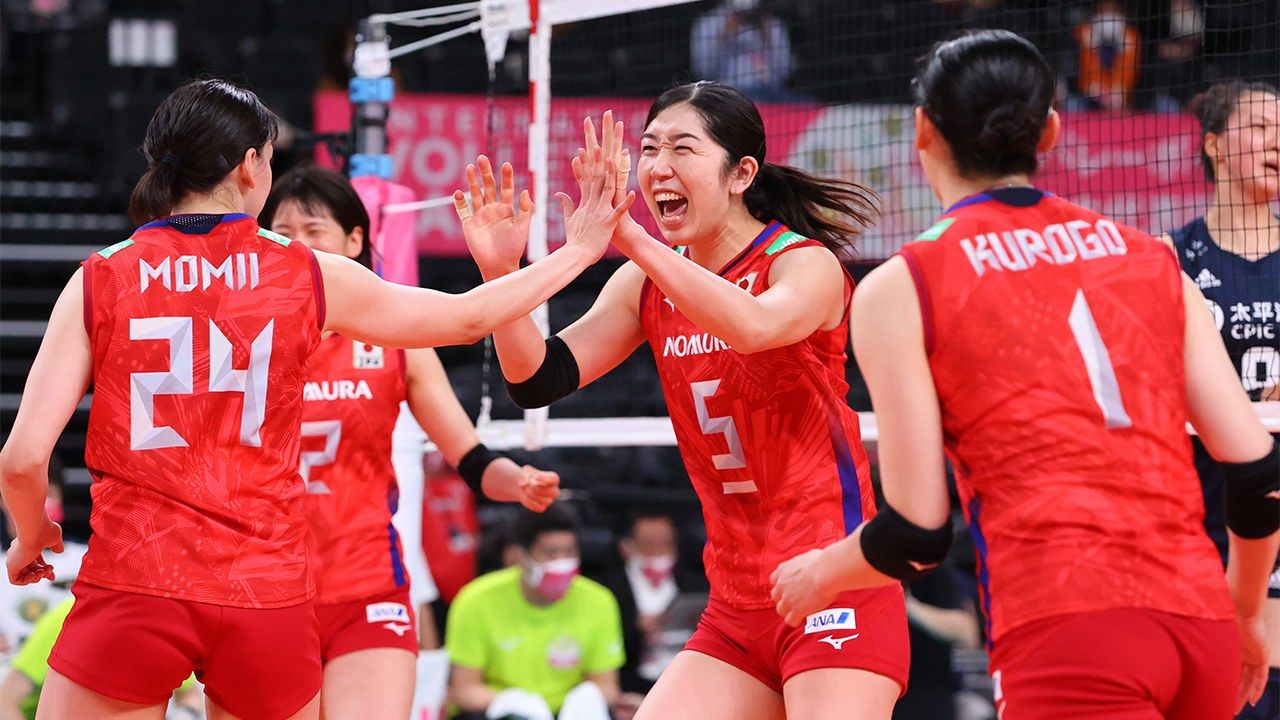 Sports Tokyo 2020 Jul 22, 2021
Araki Erika, captain of the Japanese women’s volleyball team, is rallying her fellow players around the goal of winning gold at the Tokyo Games. The veteran in her fourth Olympic appearance brings a wealth of experience, from both on and off the court, to the national team.

In her fourth games, Araki Erika, captain and middle blocker on the Japanese women’s volleyball team, is determined to add one more prize to her collection: an Olympic gold medal. Over her long career, the 36-year-old has played for clubs at home and overseas and led Japan to a bronze finish in London in 2012. She has also faced challenges off the court, including coming back after giving birth and being treated for a potentially serious heart condition. Having built on these experiences, the feisty veteran is heading into Tokyo with her sights set on an Olympic championship.

As a high school player, Araki drew attention for her skills as a middle blocker at volleyball powerhouse Seitoku Gakuen in Tokyo. After graduating, she joined the Toray Arrows of Japan’s semipro V. League, with her play earning her a spot on the Japanese national team’s travel squad touring Europe ahead of the 2004 Athens Olympics. Araki’s hopes for making her Olympic debut were high, but when the final roster for the games was announced, the 19-year-old was cut, while Kurihara Megumi and fellow Seitoku Gakuen teammates Ōyama Kana and Kimura Saori were selected as core members of the squad.

“I was stunned,” Araki recounts. “But looking back, it proved to be a positive experience.” She says missing out on Athens boosted her drive to improve. “I funneled all my energy into becoming the best player I could be. The desire to keep getting better is why I’ve been able to play as long as I have.” 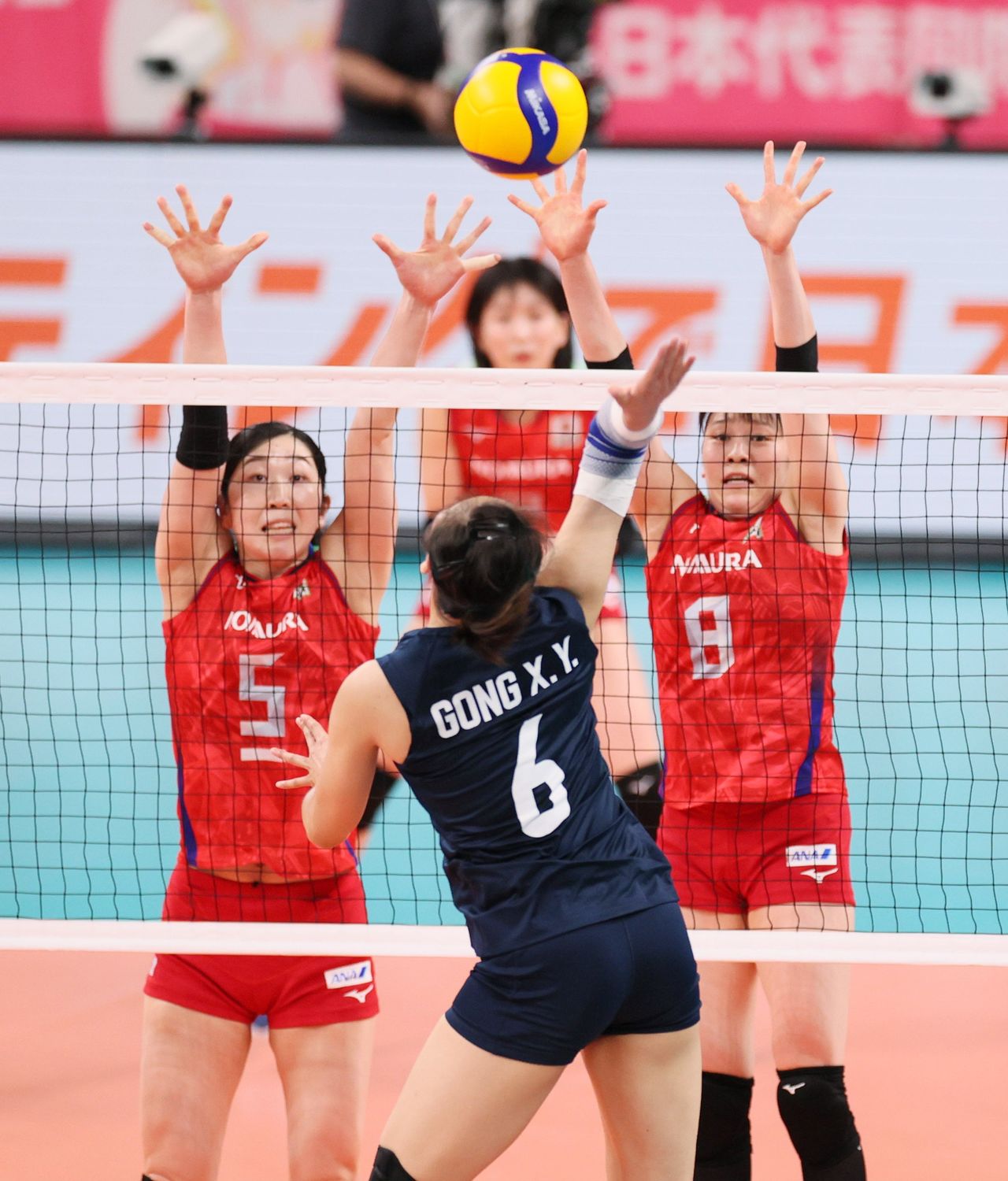 Araki (left) goes for a block during a friendly match against China at the Ariake Arena in Tokyo on May 1, 2021. At 186 centimeters tall, she is a key player at the net for the Japanese national team. (© Jiji)

Middle blockers in Japan have characteristically been fast on their defensive feet, moving into position ahead of opponents’ attacks. But Araki also brought offensive power to the position with her ability to spike even high-set balls, winning vital points for her team. By the time the 2008 Beijing Olympics rolled around, Araki had firmly established herself as a key player on the national team through her prowess at the net.

With her spot on the squad secured, she was determined not to relinquish it. “It took years of hard work to become an accomplished middle blocker, and I wasn’t about to rest on my laurels,” she says. Using her height, power, and experience to her advantage, she helped Japan reach the Olympic quarterfinals, winning the best blocker award at the games in the process.

With her first Olympics behind her, Araki continued to develop her technique. She spent the 2008–09 season on loan to Bergamo of Italy’s Seria A, gaining invaluable experience in one of Europe’s most competitive leagues. Having a seemingly limitless ability to expand her arsenal on the court, in the years leading up to the 2012 London Games, she added power and precision to her middle attacks, spiking the ball off quick sets, while also expanding her offensive versatility at the right of the net. She poured an equal amount of energy into bolstering her defensive skills.

Araki captained the Japanese team’s campaign in London, helping bring home the first medal in women’s volleyball in 28 years. She was also a key player at the 2016 Rio de Janeiro Games, where the Japanese squad finished in fifth place. Heading into Tokyo, Araki has continued to polish her skills, including improving her serving, and at the age of 36, her reputation as one of Japan’s top middle blockers remains intact. 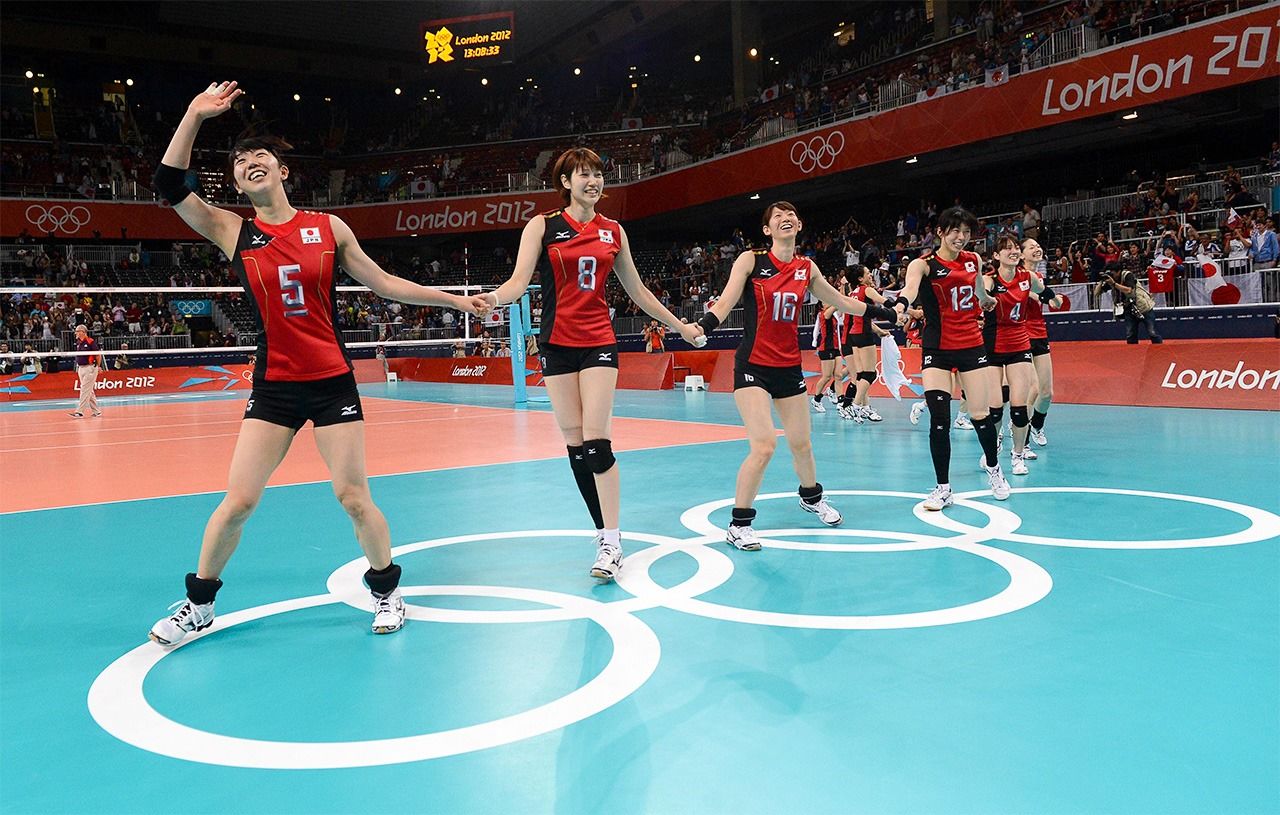 Araki (left) leads the Japanese team onto the court to greet fans following a match at the 2012 London Olympics. (© AFP/Jiji)

In 2013, Araki announced that she was pregnant and would be leaving her long-time team Toray to give birth. The demands of motherhood often force female athletes in Japan to pull the curtain on their careers after having a child, but Araki was back on the court for the 2014–15 season, playing for the Ageo Medics. Her decision to continue her career grew out of her experience in the Italian league, where it was commonplace for players to continue to compete after giving birth. With the support of her mother and husband, she made her return after only a few months. Her performance on the court that year was none the worse for her time off, with Araki ranking first in blocks and third in spikes in the league.

A New Outlook on Life

In 2015, she faced the possibility of retirement again, this time due to her health. Araki had been called back to the national team by then-coach Manabe Masayoshi, but when a medical checkup revealed she suffered from an irregular heartbeat, she was hospitalized. The attending doctor, citing the risk to her life, recommended Araki hang up her uniform for good.

Araki says the diagnosis forced her to “do some soul searching.” Wanting to exhaust all options, she underwent further testing, which revealed that her arrhythmia could be treated with surgery. She jumped at the option. “I thought that if going under the knife would keep me playing, then that’s what I’d do.” Doctors inserted a catheter in her heart, and after a brief recovery period, Araki was on the court for the start of the 2015–16 V. League season.

The experience, however, forced Araki to rethink her fitness approach. To stay in top condition, she took even greater care than she did before with her training and diet. Despite being out of action over the summer, she was ready when the season kicked off, and would go on to earn another block title. Her performance also won her a spot on the squad for the 2016 Olympics, her third. 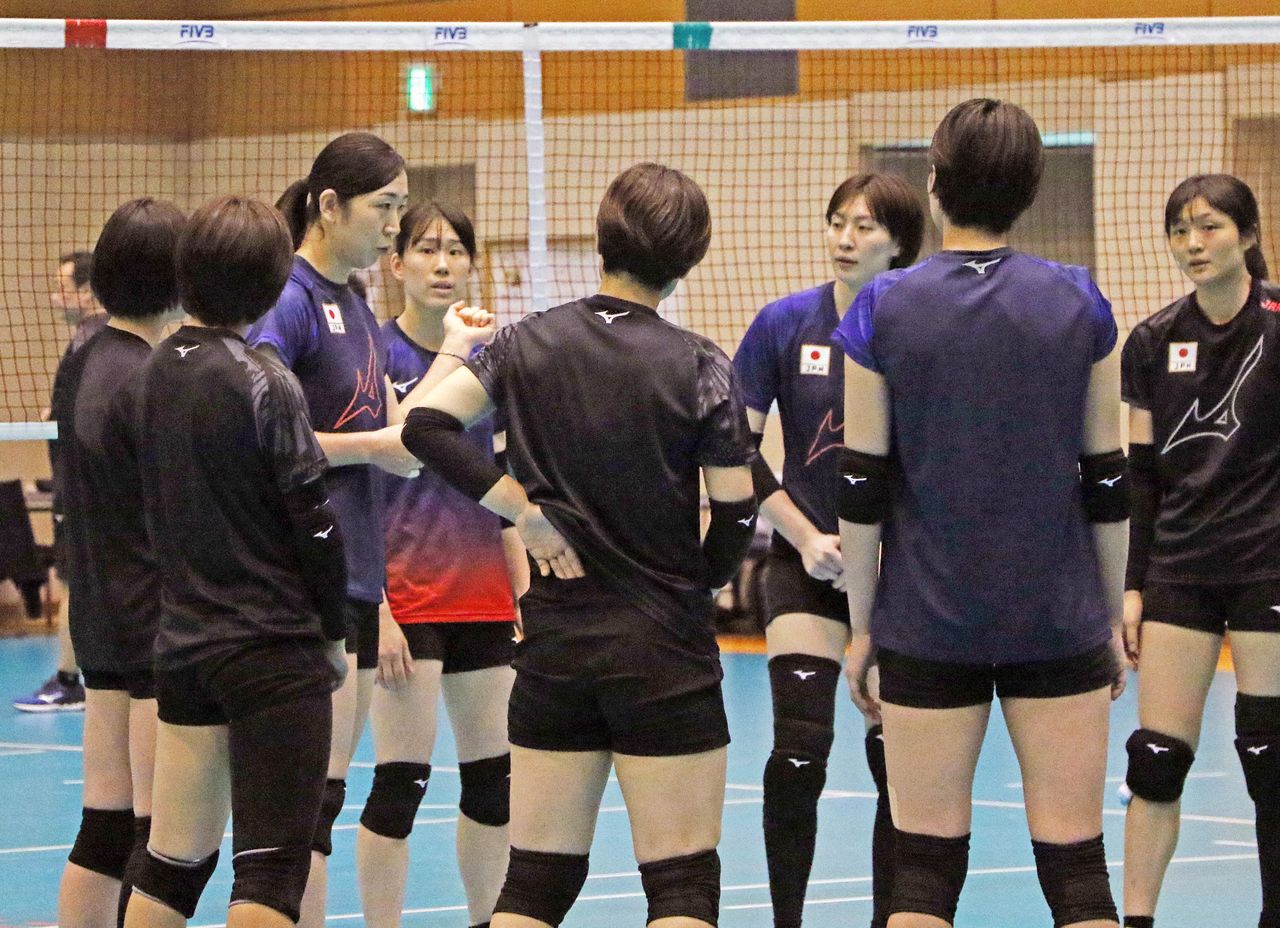 Commitment to the National Squad

Returning to the national team represents a new challenge for Araki. The time she devotes to training camps and tournaments keeps her away from her young family for long stretches. It has been especially hard for mother and child, but Araki’s commitment to playing in the Tokyo Olympics remains unchanged. “Once I’ve set my mind on something, I see it through to the end,” she declares. “I tell my daughter that when I was her age, I dreamed of being a volleyball player and that I worked hard to make that ambition come true.” She hopes when her daughter is older she will understand the sacrifices Araki is making now and that it will inspire her to follow her own dreams.

Araki, as she has done over her entire career, is certain to give 110% on the court in Tokyo. It has been a long road to her fourth Olympics, but the middle blocker brings vast experience and a must-win attitude to the national team. All eyes will be on her and her teammates in their bid for gold.

(Originally published in Japanese. Banner photo: Araki, at center, celebrates a point with teammates in a friendly match against China on May 1, 2021, at Tokyo’s Ariake Arena. © Yutaka/Aflo Sport.)