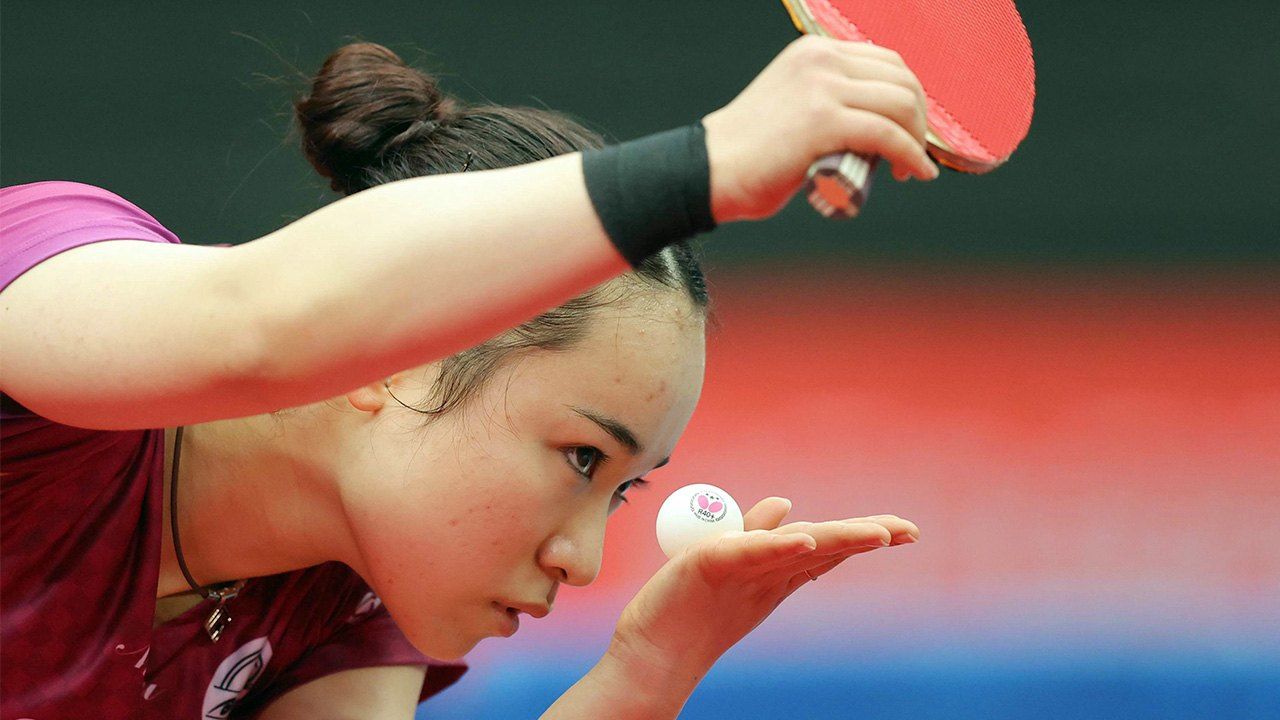 Sports Tokyo 2020 Jul 21, 2021
Japan’s table tennis ace Itō Mima has climbed through the rankings and is now poised to challenge China’s Olympic dominance in the women’s competition. A fierce competitor, the 20-year-old vexes opponents with her innovative playing style. A member of the bronze-medal team at the 2016 Rio de Janeiro Games, she is determined to give Japan its first Olympic gold in the sport in Tokyo.

Breaking Through the Great Wall

Since table tennis debuted at the Seoul Olympics in 1988, China has reigned uncontested, winning 28 of the 32 gold medals awarded, including every women’s event. At just 20 years old, Japanese player Itō Mima is poised to shake up the status quo. Armed with her distinct playing style and intense competitiveness, she is determined to bring China’s impressive run to an end in Tokyo.

Itō emerged onto the global table tennis stage in 2014 at the tender age of 13. In March of that year, she became the youngest player ever to win a title on the International Table Tennis Federation World Tour, taking doubles gold at the German Open with partner Hirano Miu, who was also 13. A week later, the pair again grabbed headlines by winning the Spanish Open for their second consecutive victory.

Two years later, Itō was back in the international spotlight as part of the bronze-medal women’s team at the Rio de Janeiro Olympics. Japan had fallen to Germany in the quarterfinals and faced Singapore to decide third place. In game four of the match, Itō defeated fourth-ranked Feng Tianwei in straight sets to clinch the bronze for Japan. At 15 years and 300 days old, she was the youngest player ever to win an Olympic table tennis medal. 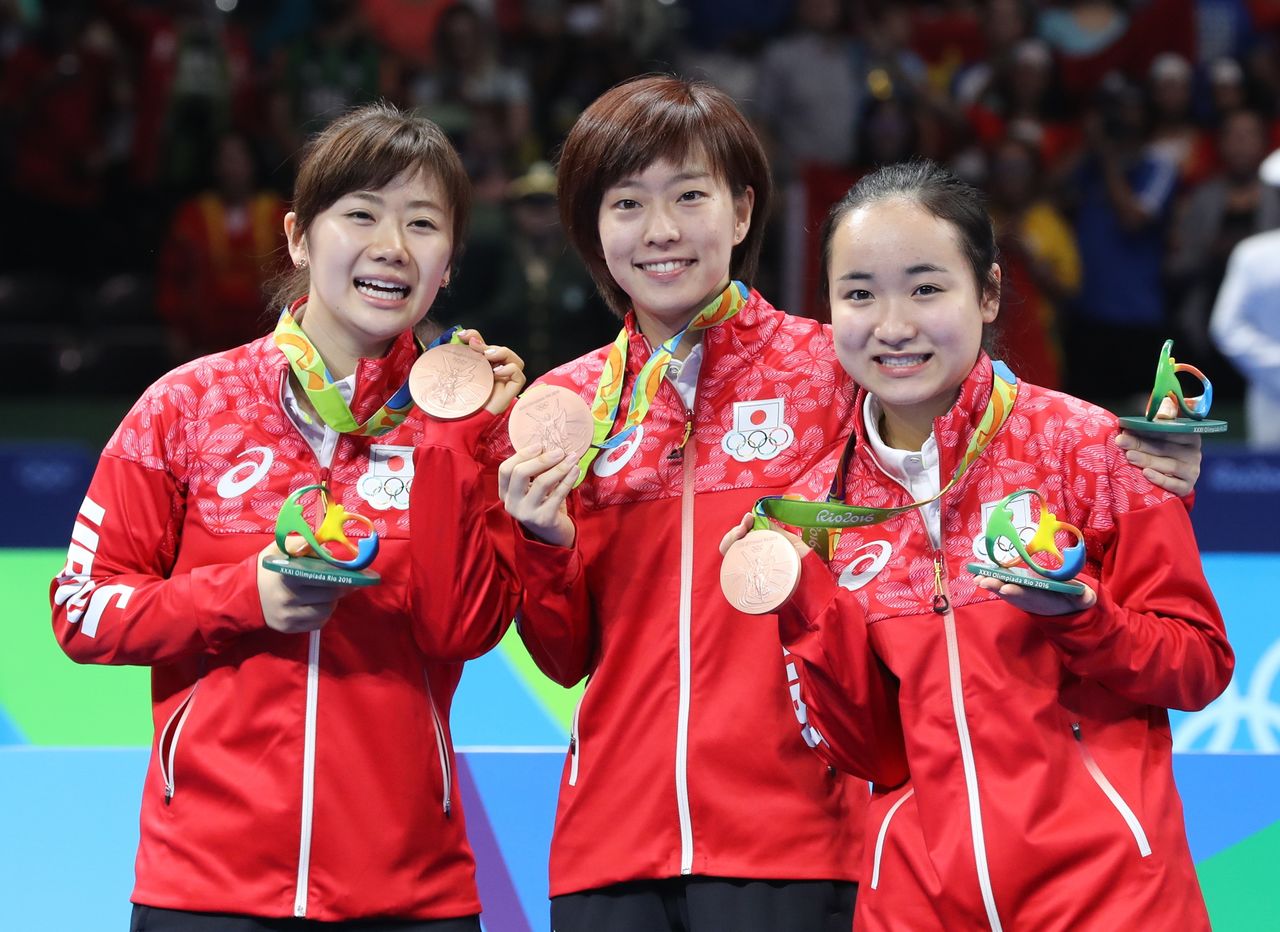 During the 2018 season, Itō earned a new media nickname, “Daimaō” (demon king), in honor of her prowess at toppling higher ranked players. At the Swedish Open in November, she vanquished the world number one, two, and six, all from China, to claim the women’s individual title. Her performance helped put her in the running for the ITTF Star Award honoring the best player of the year. While she fell short of winning top prize, she was voted the Women’s MVP of the World Team Championships.

Itō plays a fast, attacking game, staying close to the table as she wields her arsenal of shots. She is known for neutralizing forehand smashes with her compact backhand, dubbed the “Mima punch,” and for using the differing rubber surfaces of her paddle—smooth on one side and dimpled on the other—to score points with techniques like the “Chiquita,” a potent backhand flick, and the equally effective “reverse Chiquita.” She is also notorious for keeping opponents guessing by varying the height, spin, and course of her serves.

Itō’s reputation, particularly as a dragon slayer, has not been lost on China. The Chinese women’s team has come up with various strategies to counter Itō’s play, including training against players using a similar style. Itō, for her own part, has not made this task easy for the Chinese by continuing to evolve her tactics and techniques. Her record against Chinese players keeps improving, and she has held the number two spot in the world rankings, the highest for any Japanese player, since April 2020. Heading into the Tokyo Olympics, hopes are high that she will finally bring an end to China’s table tennis dynasty and capture gold for Japan.

Born to the Sport

Itō follows in the tradition of top Japanese players like Fukuhara Ai and Ishikawa Kasumi, her teammates in Rio, who started playing table tennis as young children. Itō began training almost as soon as she was able to hold a paddle, although it might be more appropriate to say that her introduction to the sport came while in the womb.

Itō’s mother Minori, who herself was a decorated high school player, says that while she was pregnant, she would communicate the action of televised table tennis matches to her unborn daughter via a tube, which she constructed herself, set on her extended belly. “Mima couldn’t watch the matches, of course,” Minori recounts, “but I still wanted her to hear the action.” She insists her motives were innocent, born out of the hope of passing on her love of the sport rather than a desire to bring her daughter up as a player.

The custom seems to have had an effect. Itō was only a toddler when she began training, with her mother as coach. From kindergarten to around the third year of elementary school, she would customarily practice for three or four hours on weekdays and sometimes six or more hours on weekends and holidays. She once described in an interview from this period staying up until two in the morning training, adding with childish frankness that “even after training for eight hours, I still have to get up and go to kindergarten.” 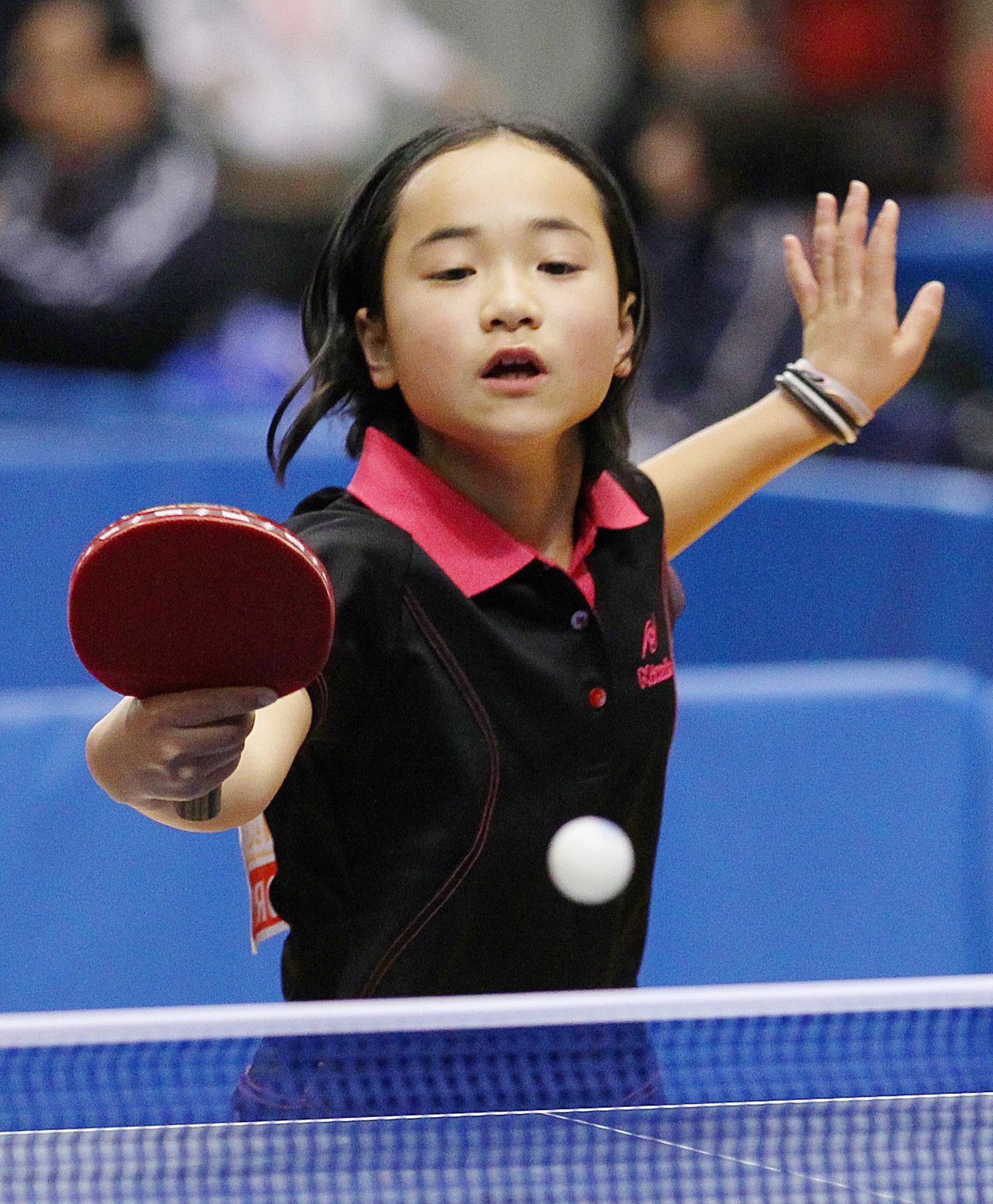 Today, it is unthinkable to subject a child to the rigorous regime that Itō followed. Youth coaches are now encouraged to instill the enjoyment of sports in their charges rather than focusing singularly on winning. This shift is in part a reaction to generations of young athletes coming out against extreme coaching techniques and other abuses they were forced to endure, practices that all too often resulted in players burning out before reaching their prime and left long-lasting physical and mental scars.

Itō agrees with Japan’s changing approach to youth sports, but insists her experience, while having all the hallmarks of overzealous coaching, was different. “I never felt overwhelmed,” she says. “It wasn’t a struggle to keep up with training and my school studies. In fact, I never even thought about it. I just did it.” Giving a short chuckle, she admits that she did sometimes find it hard to get out of bed in the morning, though.

Itō was just two years old when she took up the sport, a choice she says she made of her own accord. “I remember I was bored of playing house and wanted something interesting to do,” she says. “I told my parents I wanted to play table tennis, and that was that.” There were certainly times as a child when she felt the strain of the long hours of practice, although she seems to have accepted such difficulties as part of her decision to play the sport. In the end, there is no denying that the long hours she spent at the table have made her into the player she is today.

In junior high, she realized that mindless practice alone would not make her into a strong player. “I had to think on my feet in matches, and it made sense to do the same when training,” she recalls. “After all, I knew my strengths and weaknesses better than anyone, so who better than me to analyze my play and work on my faults? It’s not like I suddenly stopped listening to my coaches, though. Rather, their input was an important aspect of my overall approach. ” 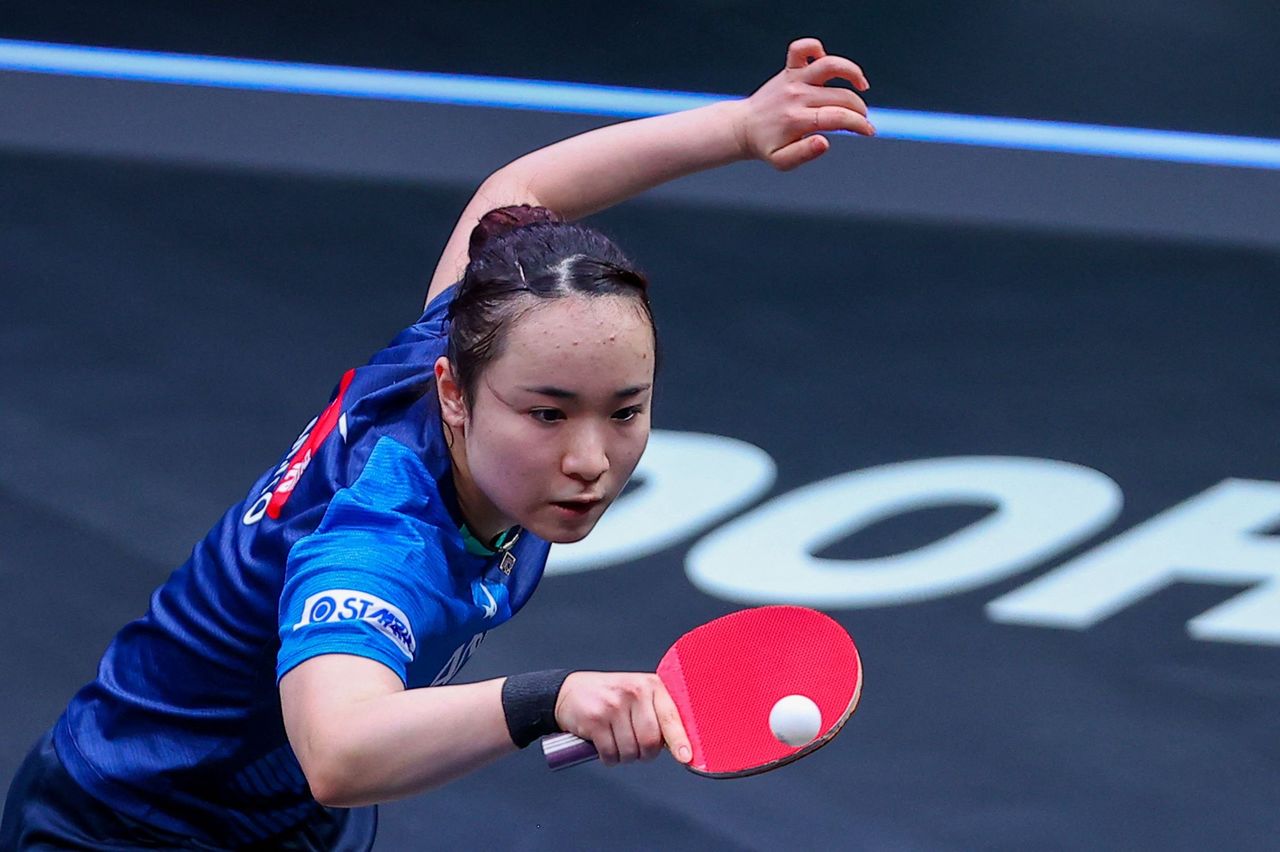 Itō plays a match at the WTT Contender Doha on in Doha, Qatar, on March 6, 2021. She won the women’s singles competition as well as the subsequent WTT Star Contender event. (© AFP/Jiji)

The table tennis circuit, like other sports, has been severely disrupted by the COVID-19 pandemic, with events being postponed or cancelled outright. Itō has made the most of the down time by further honing her game. So far during the 2021 season, she has won the singles titles at two major tournaments, the WTT Contender and WTT Star Contender, although it should be noted that with Chinese players unable to attend, Itō was the only athlete in the top seven in attendance.

Itō was in the first year of junior high school back in 2013 when Tokyo won the right to host the Olympics. At the time, she set the goal for herself of winning gold in the singles and team events. The Tokyo games will also offer her a shot at a third medal in the newly added mixed doubles, which she is set to compete in with partner Mizutani Jun. She will have to overcome a determined Chinese team to achieve her ambition, but Itō has shown that she is more than up to the task.

(Originally published in Japanese. Banner photo: Itō prepares to serve in a women’s singles match at the All Japan Table Tennis Championships on January 17, 2021. © Jiji.)