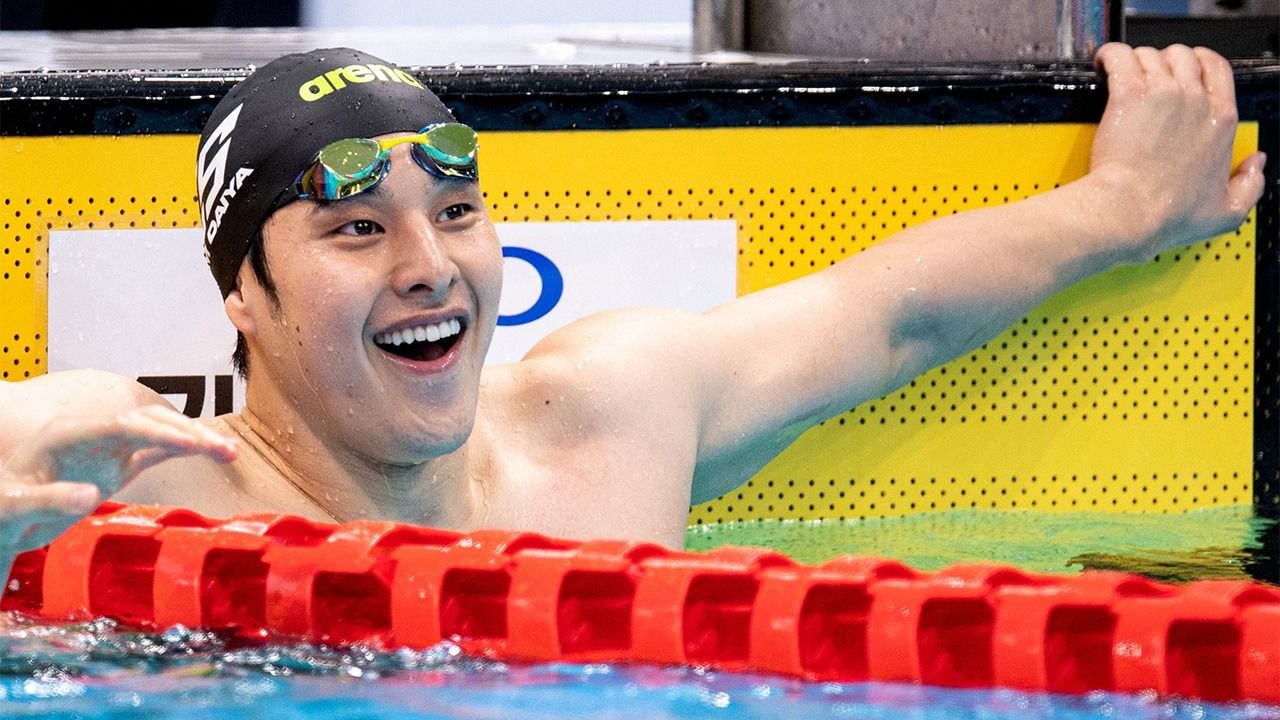 Sports Tokyo 2020 Jul 22, 2021
At the Rio Olympics in 2016, swimming star Seto Daiya had to be satisfied with a bronze medal in the 400-meter medley, losing out in the final to his great rival Hagino Kōsuke. His plan to avenge this defeat in Tokyo hit a glitch when news of an extramarital affair in September 2020 put him in the news for all the wrong reasons, with the scandal resulting in his suspension from competitive swimming for the remainder of the season. Overcoming this setback, Seto, with his insatiable passion for swimming, keeps moving forward.

The Disappointment of Bronze

One area where Japan’s athletes are widely tipped to take a big haul of medals are the swimming events. And no discussion of Japan’s swimmers would be complete without mentioning the name of Seto Daiya, now 27, who will compete in three events this summer: the 400-meter and 200-meter individual medleys, in which he took double gold in the 2019 World Championships, and the 200-meter butterfly.

Attention is on the 400-meter medley in particular, since the final of this event comes on the second day of the swimming competition—on July 25—and there are hopes that victory here might mark the start of a “medal rush” for Japan in the pool. Seto himself makes no secret of his ambitions to make a mark from the first race with a view to dominating all three events.

Born in 1994 in Saitama Prefecture, Seto has developed his talent over the course of his career through a fierce rivalry with his fellow Olympic team member Hagino Kōsuke. Born the same year as Seto, Hagino made it to the Olympics first, swimming for the national team in London in 2012. But Seto was the first to become world champion, taking gold in the 400-meter medley at the World Championships in 2013, a success he followed with another gold in 2015. 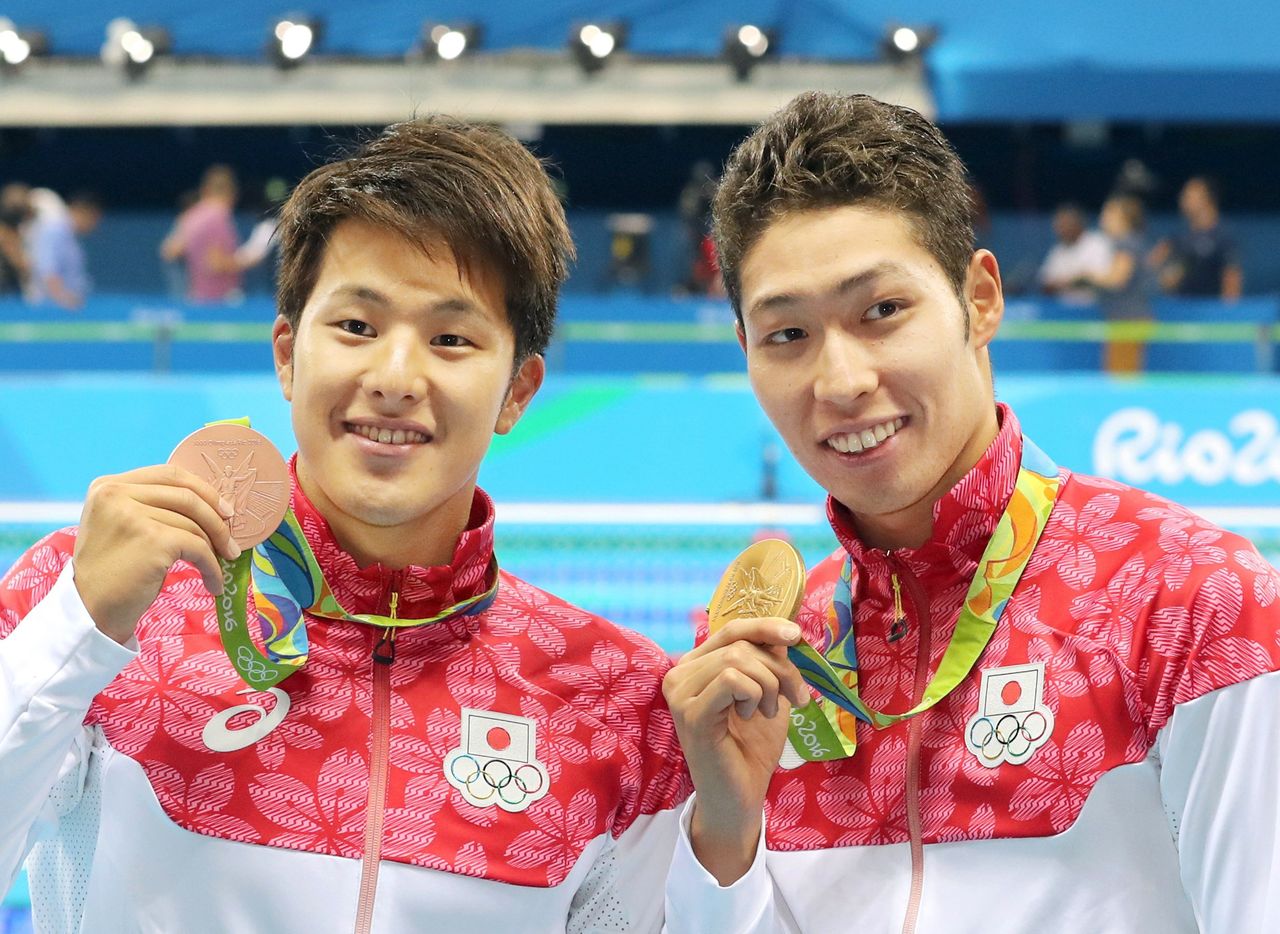 At the medals’ ceremony for the men’s 400-meter individual medley in Rio de Janeiro on August 6, 2016. Hagino Kōsuke (right) poses with his gold medal, while Seto Daiya shows off his bronze. (© Jiji)

Seto set off for 2016 Rio de Janeiro with high hopes, but the experience proved a bitter one. In the final of the 400-meter medley, he came up against Hagino, as he had so many times in the past, and at the end of the race, it was his rival who came away with the gold medal. Seto stood by his side, bronze around his neck, but despite the smiles, there was no disguising his disappointment.

He says that as he stood on the podium, he vowed to himself that come what may, he was going to win gold at the Olympics in Tokyo.

Seto resumed training as soon as he got back to Japan. He made up his mind to enter as many races as possible with the aim of toughening himself up mentally and physically. He entered the Swimming World Cup at his own expense, a far-flung international competition with successive legs in Beijing, Dubai, and Doha. He left Japan in late September, missing out on the medalists’ parade that drew a crowd of tens of thousands of jubilant fans to the Ginza area of Tokyo on October 7. For the next month and more, he singularly focused on challenging himself in a series of races around the world.

He started the World Cup filled with ambition and determination, winning a string of victories. As the series dragged on, though, he became fatigued, and losses started to appear alongside his wins. Refusing to make excuses, Seto declared that “I’m not going to give up just because I’m tired. It’s the same for everyone.” Spurring himself on, he refused to settle for anything less than his absolute best.

Starting in 2017, he drew up a four-year plan and continued with his punishing training regimen. He decided to work on his strongest individual stroke, the butterfly, without giving up his focus on the individual medley events.

“Working on a single stroke event is a good way of improving my skills, and will bring benefits in the medley events as well,” Seto said at the time. Building on this belief, he continued to strengthen his performances, taking bronze in the 200-meter butterfly in the World Championships in 2017 and silver in 2019. Then, in January 2020, he topped this by setting a new Japanese record in the event.

He also started to work hard on strengthening his kick, one of his few weaknesses. Declaring that he needed more power in his legs for the last surge in the freestyle at the end of the medley, he embarked on a grueling diet of exercise bike workouts. To remind himself of how far he still had to go, he even took part in a triathlon event. 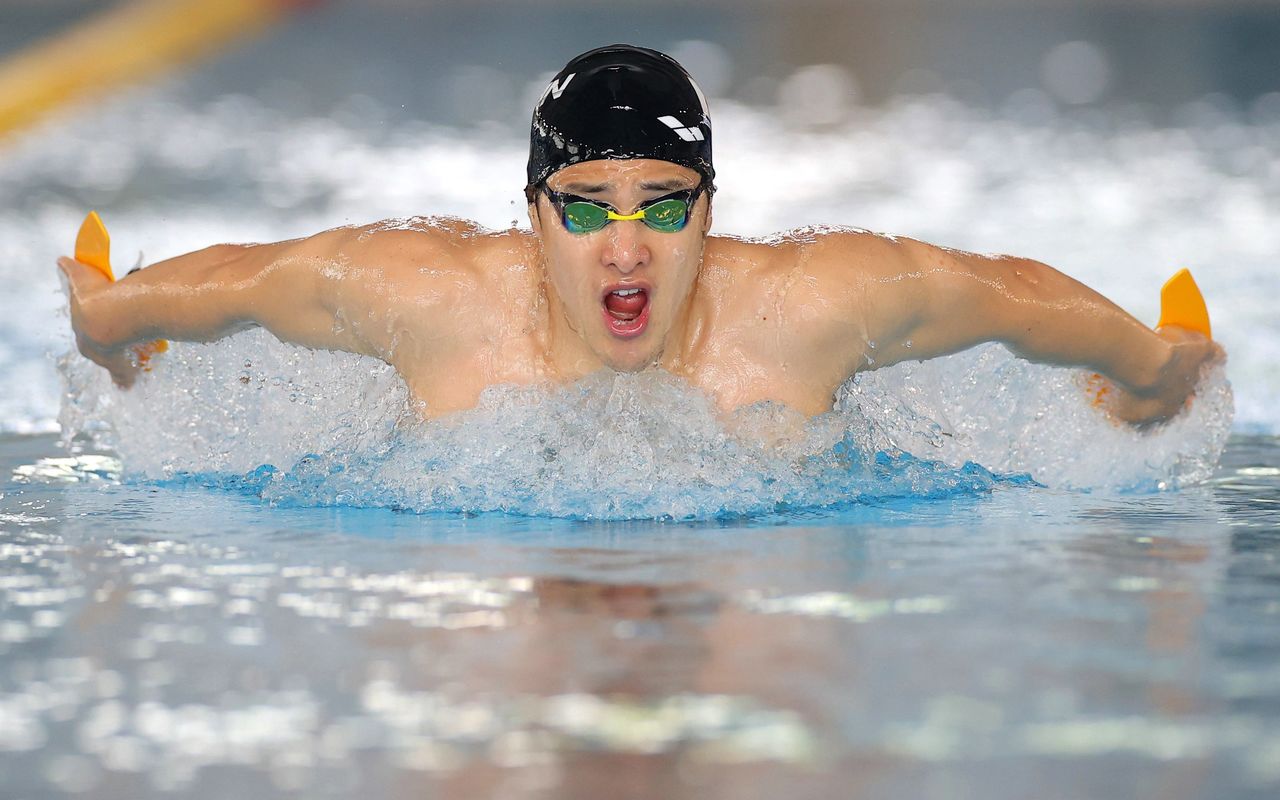 Seto arrived at the 2019 World Championships in fine form. He put in a series of glittering performances and came away with gold in the 200-meter and 400-meter medley, securing his place on the Japanese Olympic team in both events. All that was left was for Seto to put the final touches on his training and ensure that he was in peak condition when the Olympics came around in summer 2020. Everything was going according to plan, or so it seemed.

In September 2020, news broke that Seto was involved in an extramarital affair when he was seen leaving a love hotel with a woman who was not his wife. The scoop was major news, scandalizing the Japanese public, disappointing swimming and Olympics fans, and plunging the athlete himself into a fit of remorse and depression. He found himself out of contract with his major sponsor, stripped of his lucrative advertising deals, and slapped with a suspension by the Japan Swimming Federation, which banned him from competition for the rest of the year for breaching its sportsmanship code.

When the decision was taken in March 2020 to postpone the Olympics for a year, Seto was already struggling to remain motivated and was unable to throw himself into training with the same vigor. Although he retained his place on the Olympic squad, he doubted that he would be able to regain the strength and form he would need to make him a realistic challenger for gold.

Having lost so much, it was swimming that helped Seto restore his confidence in himself. At the Japan Open in February 2021, his first competitive outing since his suspension, Seto solemnly remarked that “I disappointed so many people last year through my irresponsible behavior, and I want to express my feelings of remorse and my gratitude at being able to swim again.”

His first race was the 400-meter medley, which he swam in 4:12:57, an impressive time after so long off the swimming circuit. His performance suggested he had not been idle during his suspension. In fact, he had been swimming laps and putting together his own training program away from his teammates. 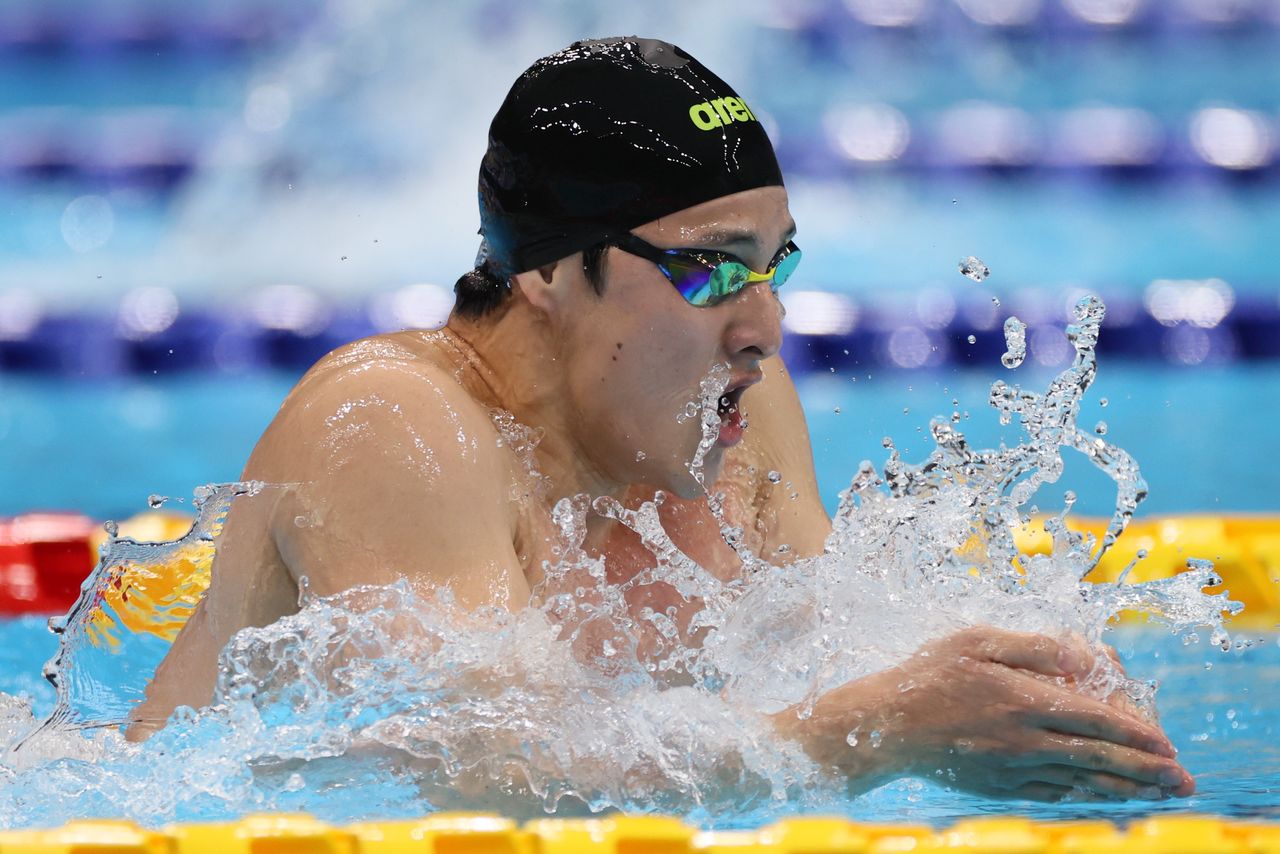 Seto in impressive form in the final of the Japan Open 400-meter individual medley on February 4, 2021, at the Tokyo Aquatics Center. (© Jiji)

After his return, Seto worked to steadily improved his times ahead of the Japan Championships in April at the Tokyo Aquatics Center, venue for the swimming events at the Tokyo Olympics. On the first day of the tournament, Seto sailed to victory in the 400-meter medley. His time of 4:09:02 marked his best performance ever at the event and was nearly a whole second faster than his outing two years earlier.

“My times have been getting steadily better,” he later remarked. “I can feel my strength and form coming back little by little every day.”

Another Chance to Shine

Seto seems ready for the Tokyo Games. After the Japan Championships, he spoke again of his state of mind as the Olympics drew closer, saying that “Swimming is what allows me to express myself. It’s what I’m known for. Of course, I take full responsibility for what I did. But maybe I can atone a little for my mistakes by working hard on my swimming. All I can do is to train and concentrate wholeheartedly on doing the very best I can.”

Seto has said that he sees a steely inner determination as one of his major strengths: “I think probably there’s no one who can stop me when I really put my mind to something. I want to concentrate on my swimming, on being able to swim my best possible race, the perfect race as I picture it in my mind. If I can do that, I firmly believe that the gold medal will be in reach.”

Seto’s parents instilled a positive mindset in him from an early age, and gave him his name (a close homophone with the Japanese word for “diamond”) out of the belief that like the gem, the more he polished his talents, the brighter he would shine. This summer, the Olympics will give him another chance to glimmer on the biggest stage of all.

(Originally published in Japanese. Banner photo: A smiling Seto Daiya celebrates his victory in the 200-meter individual medley at the Japan Swimming Championships at the Tokyo Aquatics Center on April 8, 2021. © AFP/Jiji.)