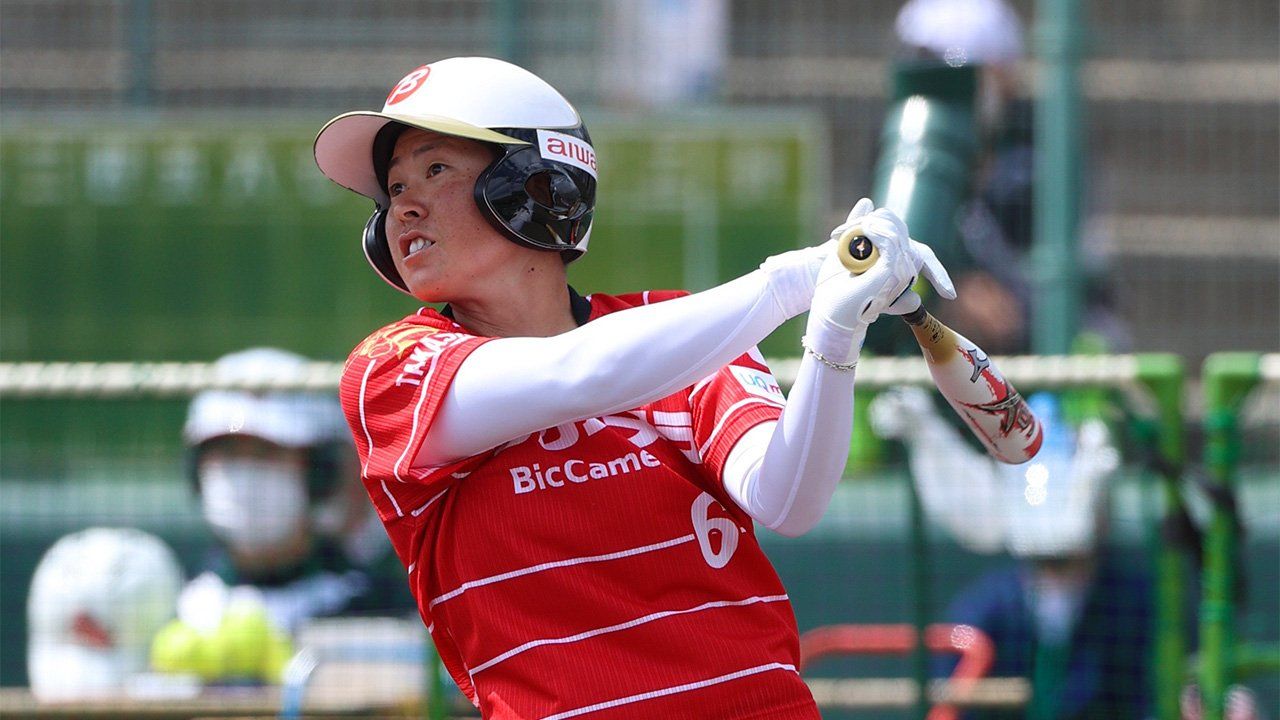 Sports Tokyo 2020 Jul 21, 2021
Softball makes its Olympics return at Tokyo 2020 for the first time since 2008, and Fujita Yamato spearheads Japan’s effort to win a second gold medal in the women’s sport. A look at this team leader and fierce competitor both on the mound and in the batter’s box.

The Tokyo Olympics see the return of baseball for men and softball for women for the first time since 2008. A strong Japanese softball squad is aiming to repeat its gold medal performance at the Beijing games, driven by pitching great Ueno Yukiko. One potential hero this time around is pitcher Fujita Yamato, who also poses an offensive threat at the plate.

Like Ueno, whom she looks to as a hero and inspiration, Fujita is a right-handed ace renowned for pitching complete games. In the batter’s box, she is feared by opposing pitchers for her long-ball power. As a pitching/batting double threat, this 30-year-old has earned the nickname “softball’s Ohtani Shōhei.”

For years now she has had her eye set on big things at the Tokyo games. At the beginning of 2021, though, she shocked her fans with a sudden move from the Taiyō Yūden team in Japan’s corporate league, where she had played for 12 years since graduating from high school, to Bic Camera Takasaki, a rival team in the same city of Takasaki, Gunma Prefecture. “I want to grow more as a player,” she stated when announcing her move—and it appears she is counting on the presence of Ueno, a pitcher and coach for the Bic Camera team, to propel that growth forward.

“In many ways I’m still rough around the edges as a player,” says Fujita. “I hope to learn techniques as well as mental balance from Ueno and others on the new team. With hard work, I may one day be able to stand alongside Ueno and know that I belong there.”

A Young Player Looks to Her Heroes

Fujita was born in 1990. Inspired by her older brother to take up softball, she made rapid strides in the sport, eventually playing it for Saga Joshi, a powerhouse girls’ high school in Saga Prefecture. In her freshman year the team won the national championship, and she was marked as a promising future star on the mound.

As a senior, though, she watched the national squad take the gold medal at the 2008 Beijing games. While caught up in the thrill of seeing Japan win its first Olympic championship, she found herself thinking: “There’s absolutely no way I’ll be able to make it onto a team of this caliber.”

After graduation she joined Taiyō Yūden. She showed little promise as a pitcher for her first two years, though, and the team relied on her for just her slugging talents. In 2011, though, she began her third season on the team by urging the manager to give her a chance to pitch again. This time it appears she was ready to throw, and she began rebuilding her reputation as an ace.

Double Threat with a Triple Crown

In 2012 Fujita made the national squad for the first time, taking part in the Women’s Softball World Cup. Japan was fielding powerful teams in this era, winning the championship in both 2012 and 2014, but as the sport had been removed from the Olympic schedule, international interest was low at the time. Some also pointed out that the United States, the perennial favorite in international competition, was not dedicating serious resources to its softball program in those years.

None of this had any effect on Fujita’s hunger for victory, though. Her motivation grew still stronger as Tokyo was tapped in September 2013 to host the 2020 games and speculation mounted that baseball and softball would return as Olympic events. The following year, she began building her reputation as a combination pitcher/batter. Utsugi Reika, then the manager of the national squad, had her eye on Fujita—already a reliable presence on the team—as a potential marquee player to stand alongside team star Ueno Yukiko. 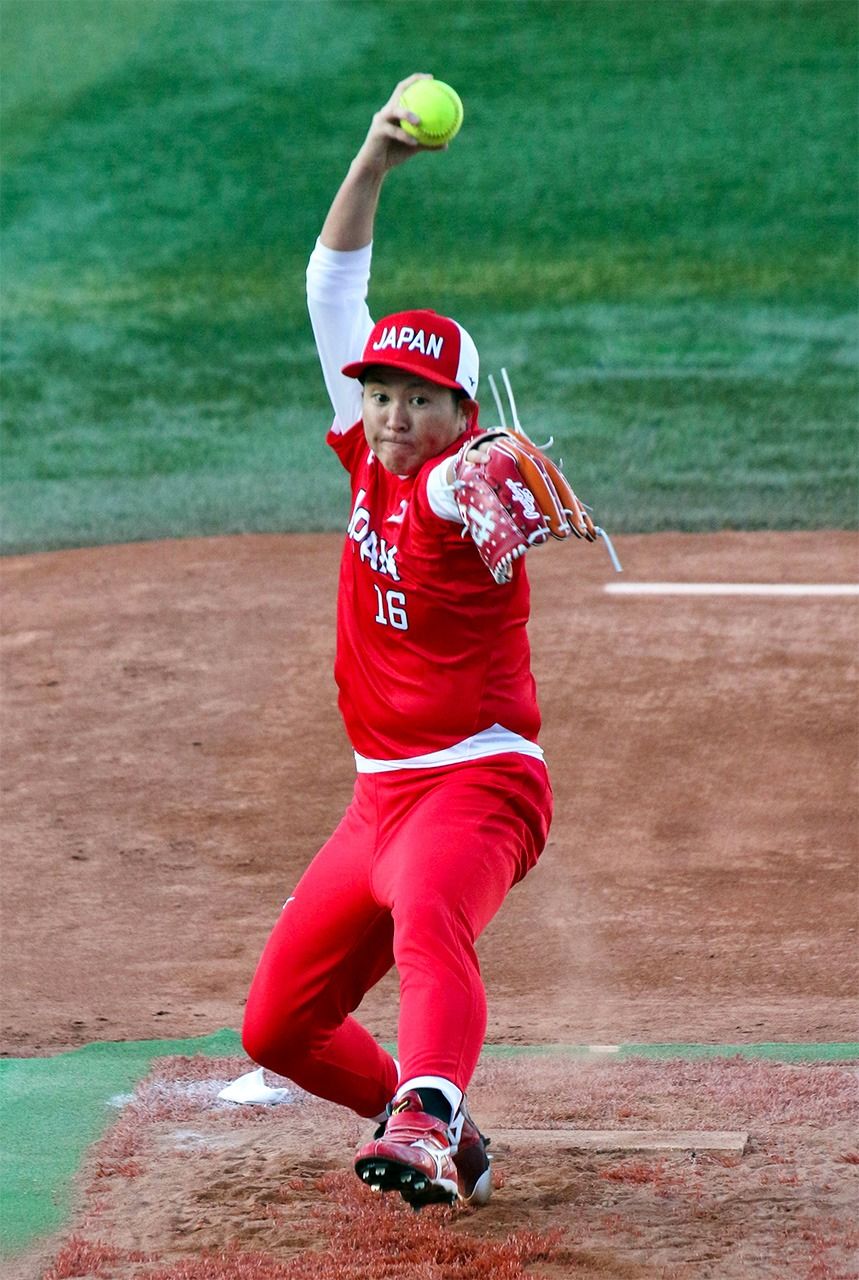 In 2016, Fujita Yamato was voted the season’s most valuable player as she won an unprecedented triple crown in Japan Softball League play, racking up the most wins as a pitcher and the most home runs and runs batted in as a batter. By this time, she says, she was fully enjoying the benefits of playing on both sides: “When I was throwing, I had a good idea of what was going through the batter’s mind, and when I was up to bat, I could put my knowledge of pitching to good use too.”

She has also gained much by taking the field along with Ueno on the national team. Ueno, who turned 39 on July 22 this year, is still working hard to master new pitches and showing no signs of slowing down in her drive to improve and win. Fujita has made the most of her time playing with perhaps the greatest ace Japan has ever produced, sitting next to her in the dugout and peppering her with questions about the play unfolding before them. She has literally honed her own craft at the side of the master, closely observing Ueno’s performance in practices and games.

It was in 2019, though, that Fujita truly came into her own. In April that year Ueno was hit by a batted ball, fracturing her mandible on the left side and putting her out of action for four months. Fujita filled in on the mound in a June friendly match against the United States, pitching a complete game and picking up the win with 11 strike-outs and just two hits given up. This performance blew away the worries the Japanese team had due to Ueno’s absence; Fujita had won the full confidence of her teammates.

The Tokyo 2020 softball action kicks off on July 21, 2021, two days before the Opening Ceremony, with Japan taking the field against Australia at Azuma Sports Park in Fukushima Prefecture. Six teams in all, also including Canada, Italy, Mexico, and the United States, will play a round robin tournament, and the first- and second-place finishers will face off at Yokohama Stadium on July 27 for the gold medal. In order to stand atop the podium, stresses manager Utsugi, “we can’t lose a single game.” 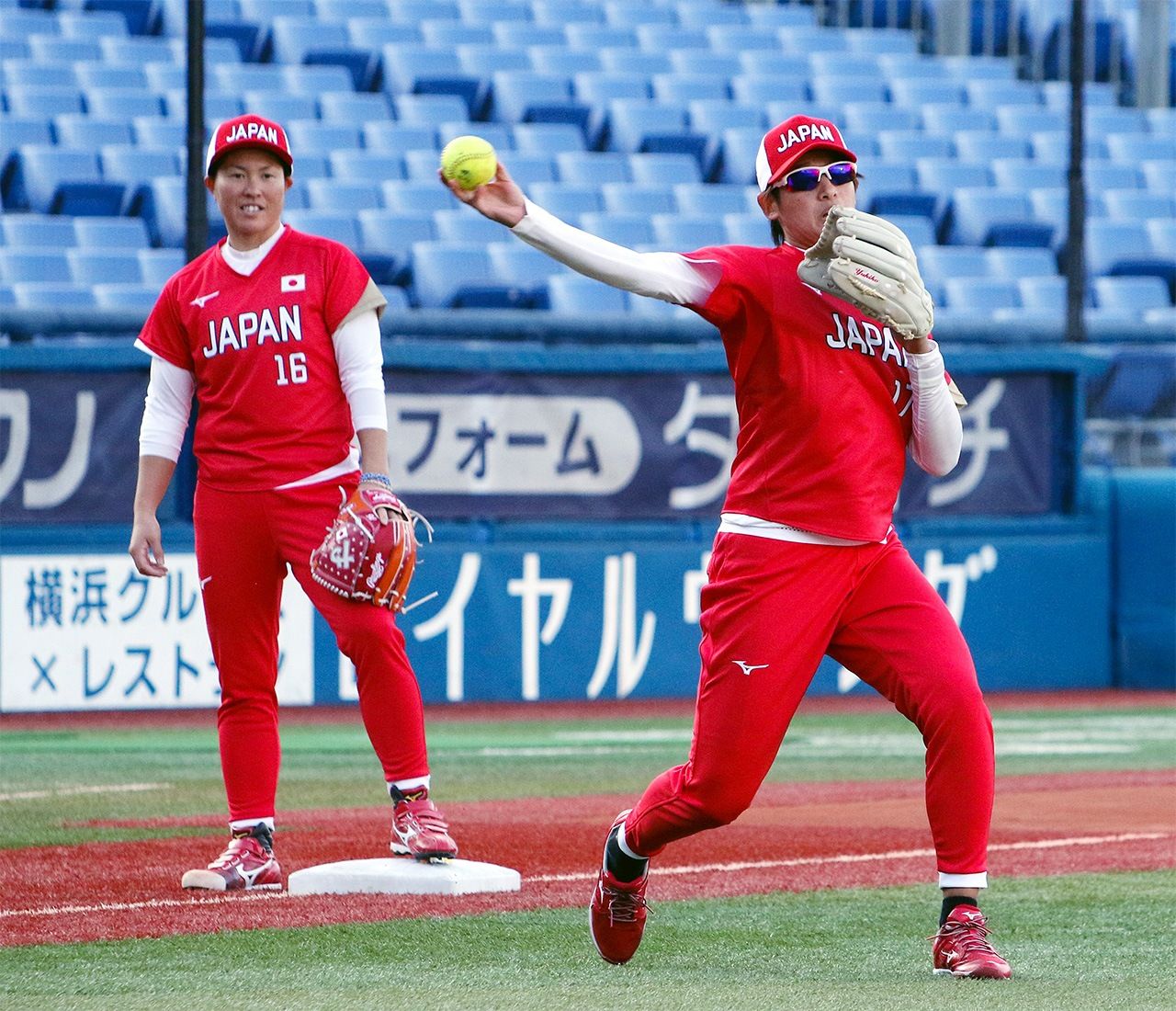 Fujita, at left, watches Ueno in action at the Yokohama Stadium training camp on November 17, 2020. (© Jiji)

With both all-time ace Ueno and rising star Fujita in the dugout, the Japanese squad looks to be in a strong position going into the tournament. Utsugi has tapped the 20-year-old southpaw Gotō Miu as a young reliever backing up these two veterans, both of whom will start games for Japan.

“I feel my biggest weapon is my ball control,” says a confident Fujita. “So long as I keep solid control of my pitches, I believe I’ll do a great job in the innings I pitch.” We may even see the fearsome pitching combination of Fujita as starter and Ueno as closer in some games.

Fujita seems happy with the benefits of this possibility. “It’s a real confidence builder to have Ueno at my back like this. If I’m locked in on the mound for a lengthy stretch of a game, it can make me think too much about the pitching to come, but in this situation I can focus on going all out in the smaller number of innings assigned to me.”

She goes on: “It’s such a joy to be able to play alongside Ueno in such an important tournament. That’s exactly why we’ll need to work hard and pitch well, though, to make sure this isn’t the only happiness we have at the Olympics.”

Ueno Yukiko has been the leader of the Japanese softball world for the last 13 years, since the sport was last played at the Olympic Games. Her ceaseless efforts have been the key to keeping Japan’s team ready for top-level international play during that time. Sadly, softball and baseball are again being taken off of the list of events for the Paris games in 2024, but representatives of the sports are pushing for them to be readded once more in Los Angeles in 2028. It will fall to Fujita to keep the Japanese softball team ready for Olympic play until then, as Ueno has done until this year. But before any of that, one goal stands clearly before them both: winning the gold medal at the Tokyo games this year.

(Originally written in Japanese. Banner photo: Fujita Yamato, at a solid 65 kilograms and 165 centimeters in height, brings real power to her swing. Taken on April 3, 2021, at Baycom Stadium in Amagasaki, Hyōgo Prefecture. © Jiji.)