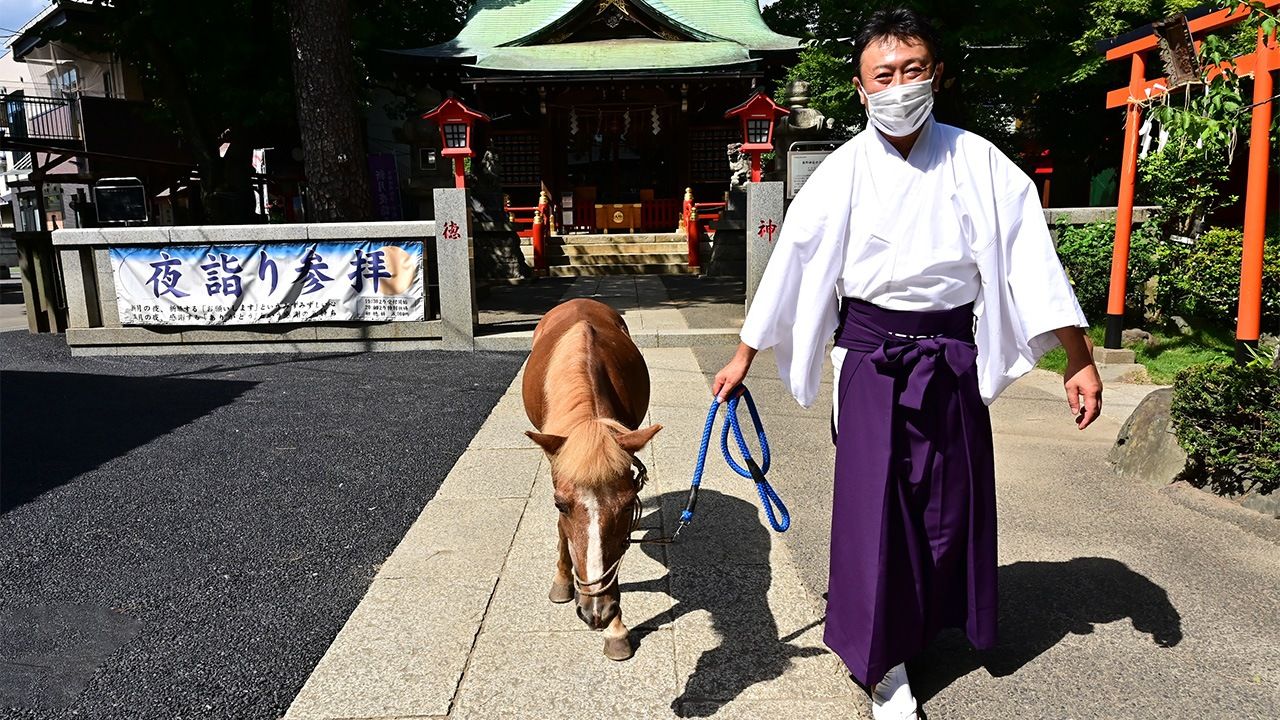 Society Travel Oct 27, 2021
Kirara the Shetland pony has worked as a “sacred horse” at Kumano Shrine in Tokyo for more than 20 years. Part four of our animals at work series.

Few Shrines with a Real Horse

Since ancient times, the custom for Shintō shrines in Japan had been to keep a “sacred horse” to be ridden by the gods. But keeping horses is not easy, and gradually, the practice changed to symbolic representation, including on ema votive tablets, which originally had pictures of horses on. Nowadays, there are very few shrines with a real horse. 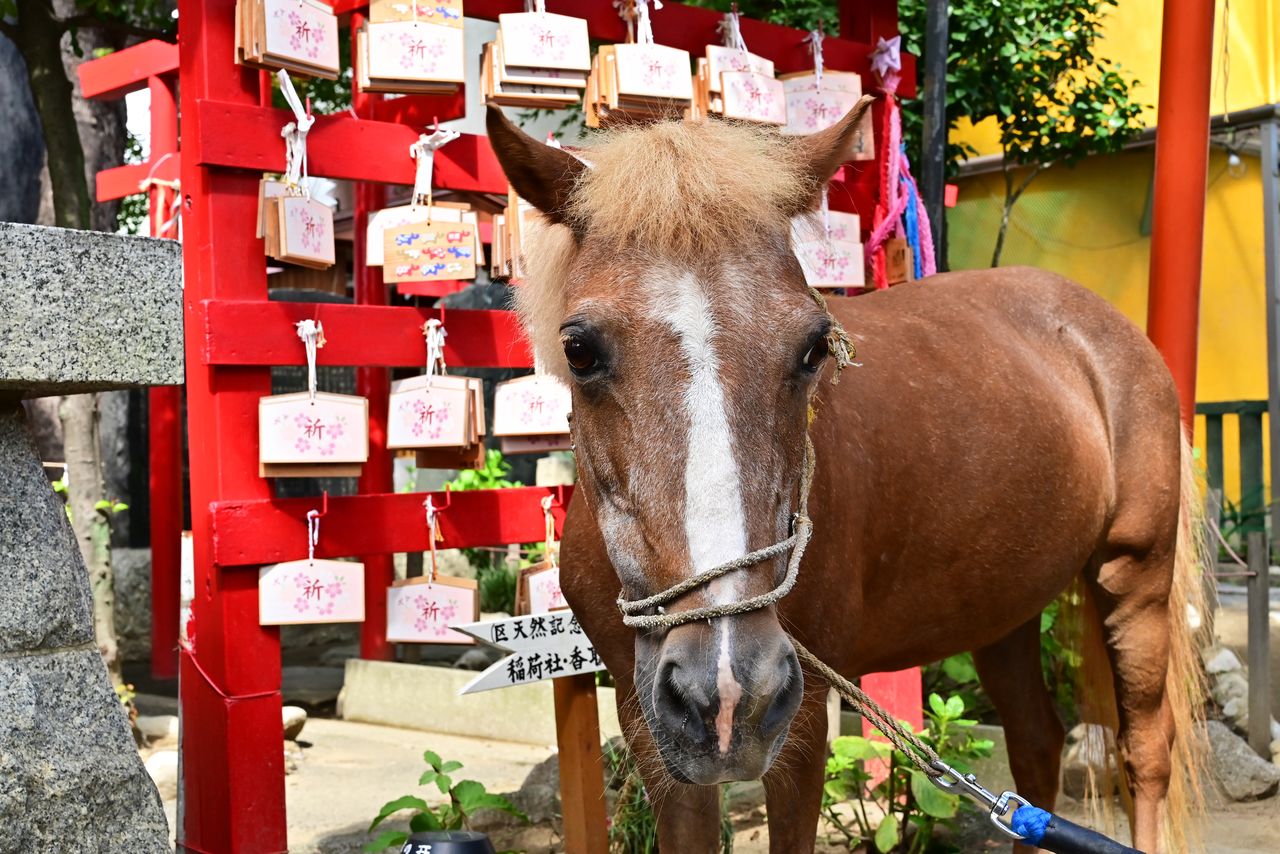 Kirara the pony, beside the ema which carry the wishes of visitors to the shrine.

The Gohōzan Kumano Shrine, in Katsushika, Tokyo, has a history dating back over a thousand years, and is known for its ties with Abe no Seimei, a legendary onmyōji, or diviner. It also has three cute horses.

“Kirara is a Shetland pony mare who turned 27 this year, and is still full of life. She is the boss of the two other sacred horses, both geldings,” says the shrine’s chief priest Chishima Shunji.

Originally from Hokkaidō, Chishima had a horse trainer for a father and a brother who was a jockey, so he grew up in a very horse-friendly environment. He initially rode in equestrian competitions and was also a trainer at the Japan Racing Association horse racing school before becoming a priest.

“I thought that there should be sacred horses at a shrine and, luckily, I am a professional. So, we brought Kirara down from a farm in Hokkaidō in December 2000.”

Kirara was six years old when she arrived at Kumano Shrine. This is equivalent to her mid-twenties in human terms, and it took her a little while to get used to the environment.

A Friend to Children

“There is a kindergarten attached to the Kumano Shrine, and the little kids run around shouting, and making noise with musical instruments.” Chishima laughs. “Initially, it was hard for the horses to get used to it. But after a while we noticed that they looked rather wistful during the holidays.”

There is a special area inside the shrine compound when the children can play with the horses. 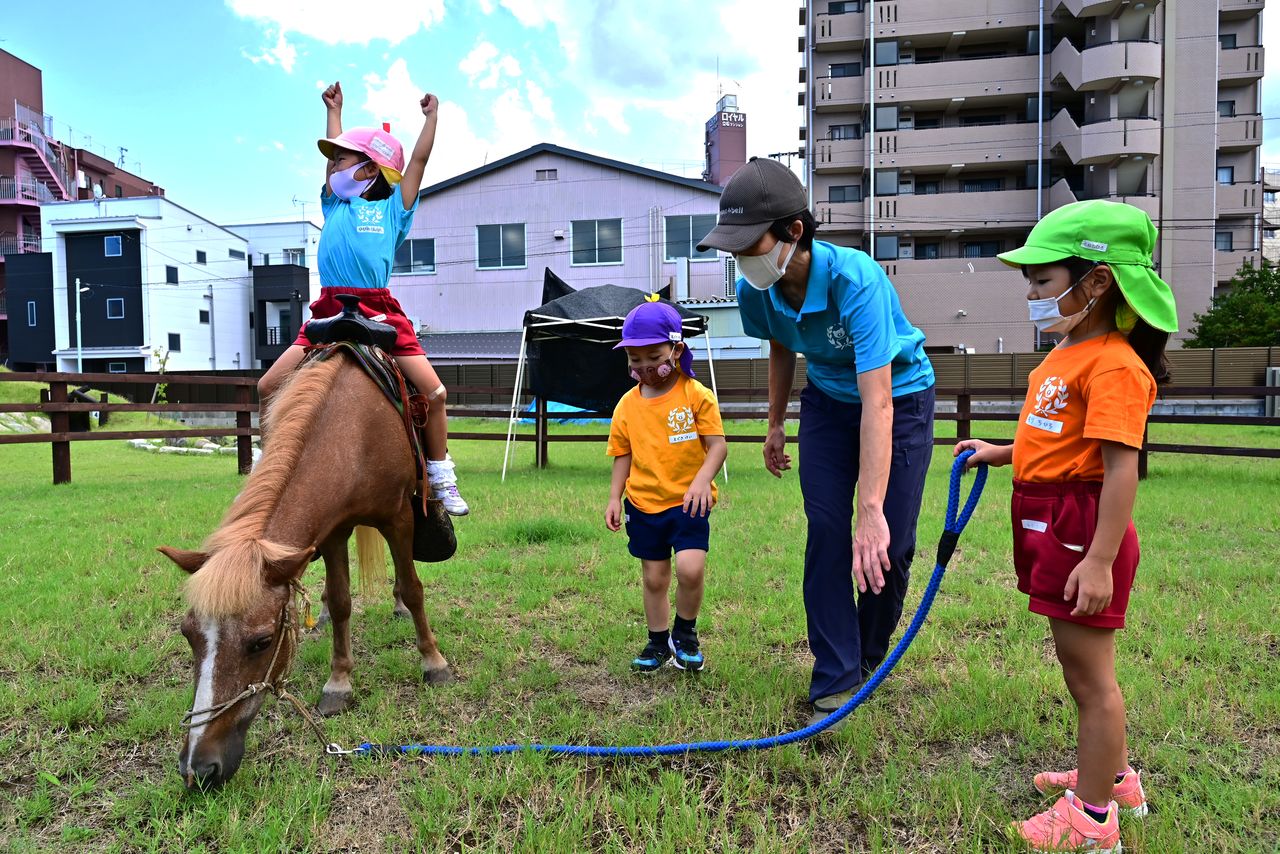 Veteran Kirara is quite used to being around children.

As the children look after the ponies, and get on their backs, they develop a holistic understanding of how to deal with nonhuman friends.

“Horses are a lot more straightforward than people, and they have no hesitation about expressing things like ‘I don’t like that’ or ‘I love getting treats.’ That is really good for the children’s emotional growth,” says Chishima. “And since the horses themselves understand their role very well, they know how to deal with children.”

Miniature pony Choco arrived in 2011, and Japanese pony Vanilla joined the herd in 2019, so there are now three ponies to play with the children, greet visitors to the shrine, and of course fulfill their role as sacred mounts for the gods. Their days are busy!

One of the horses’ important roles comes around each year in the autumn, during the Shichi-Go-San festival (a rite of passage for three- and seven-year-old girls and five-year-old boys), when they give rides around the shrine compound in a carriage to the children who have been blessed with prayers for healthy growth.

“As you can see, we are very close to animals at this shrine. From October, we will start purification rituals to pray for the health and long life of pets. Since we have horses here, it will be on the Day of the Horse each month.” 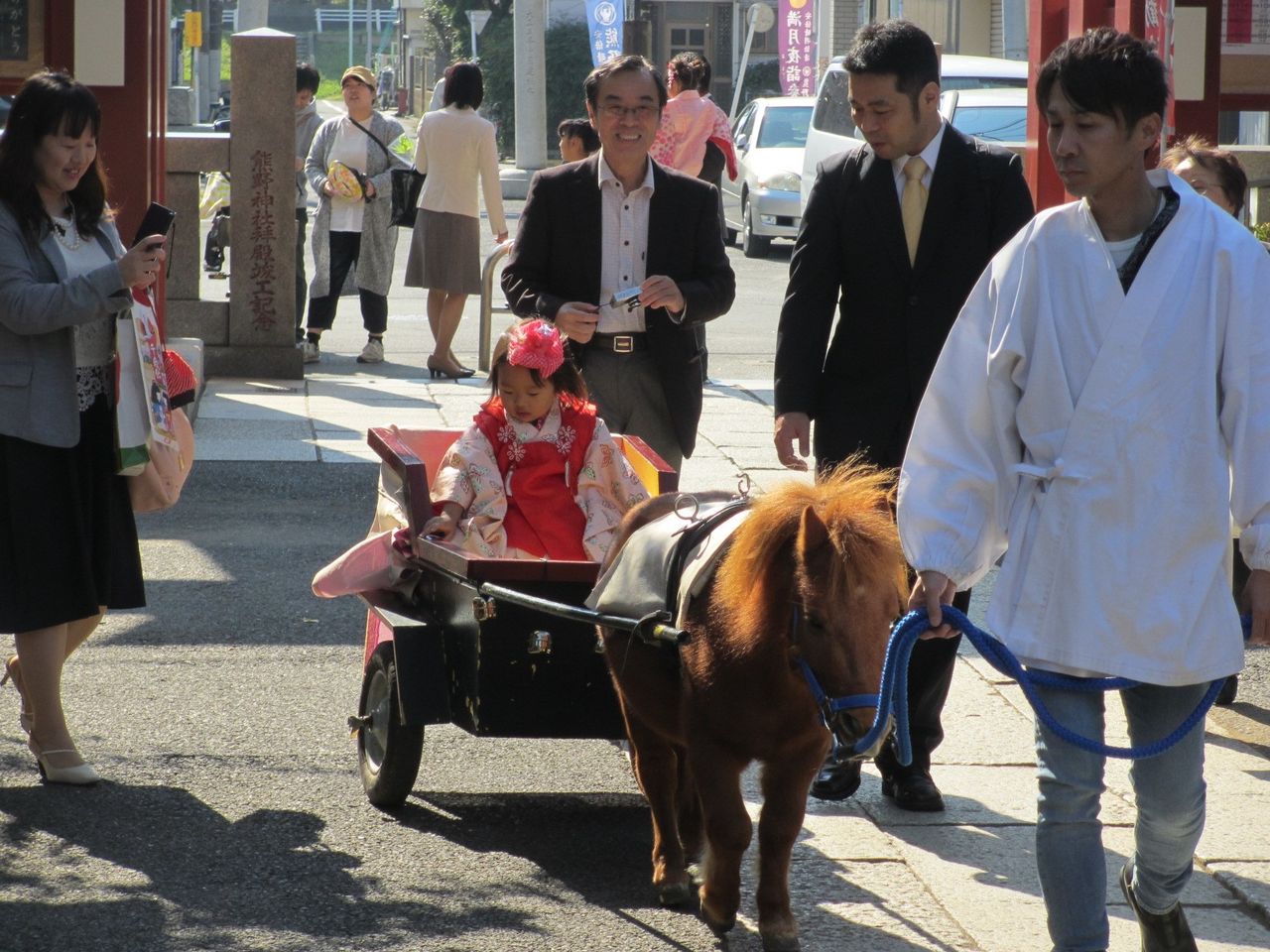 In the past, Kirara also pulled the carriage, but she has now passed the job on to the younger Choco and Vanilla. (Courtesy Kumano Shrine)

And chief priest Chishima had another announcement.

“In April, my own mare, who is stabled at a farm in Chiba, had a white foal. I am not sure in how many years it will be, but there is a possibility that there will be a white thoroughbred at Kumano Shrine in the future.”

Kumano Shrine was built more than a thousand years ago within the boundary of a pentagon drawn by diviner Abe no Seimei when he visited the flood-hit area, based on the theory of Yin and Yang and the Five Elements, as per onmyōdō (the philosophy of Yin and Yang).

Now into the twenty-first century, it stands for the peaceful coexistence of all living things, under the protection of its three sacred horses.

Main job: Attending to her duties as a sacred horse. Playing with the children at the kindergarten.

(Originally published in Japanese. Banner photo: Kirara and chief priest Chishima Shunji strolling through the shrine compound. All photo by Yamaguchi Noriko except where otherwise noted.)