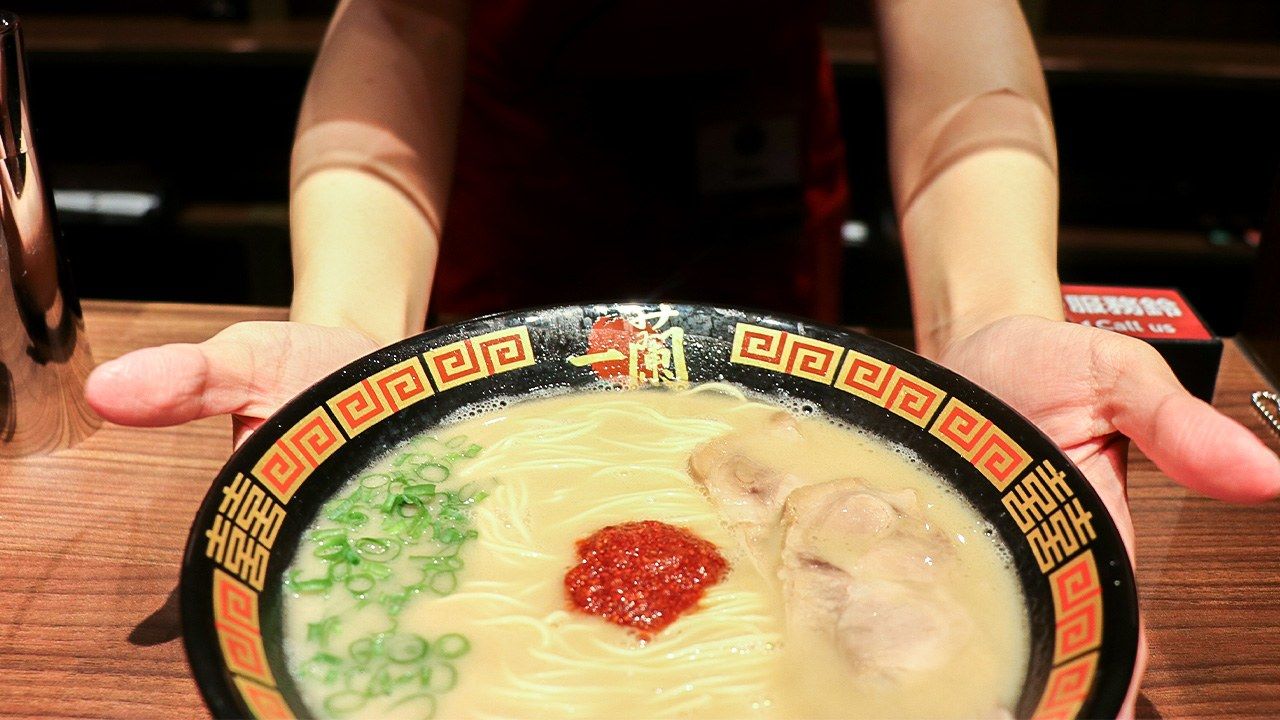 Food and Drink Society Oct 4, 2021
Japan’s ramen culture has quietly become a part of Taiwanese daily life. Walking on the streets of Taipei, every few steps you can spot a ramen restaurant nearby. Among all these competitors, one stands out for its flavor and the crowds it attracts: Ichiran, a tonkotsu pork-broth ramen restaurant originating in Fukuoka.

The Xinyi district, in the eastern part of Taipei, has grown rapidly since the 1990s, with many high-rise commercial buildings. At night, it becomes a charming place where people enjoy drinking and dining, just like they might in Roppongi in Tokyo.

Standing out even among all this hustle and bustle, though, is one restaurant on the first floor of one of the towers. Whether it’s day or night, and despite the COVID-19 pandemic, people keep lining up here. This is the popularity of Ichiran, the famed tonkotsu (pork-marrow broth) ramen restaurant from Fukuoka, Kyūshū.

The Japanese restaurant’s first branch in Taiwan opened on June 15, 2017. Since its launch, it has seen long queues that surprised even the Japanese company representatives in Taiwan to set up the outlet. “We have a record of 312 hours of non-stop queuing,” recalls Lin Wanying, the public-relations officer for Ichiran Taiwan.

To shorten the queues, the popular eatery opened another branch in June 2018, 300 meters away from the first store in Taipei. However, Lin confessed that despite having two stores, it still took two to three hours to line up for meals on weekdays, and even five to six hours on holidays.

In 2020, due to the impact of the COVID-19 pandemic, the crowds declined slightly for a while. However, when the epidemic came under control in Taiwan, the crowds flooded in again.

The restaurant has proven to be the most popular Japanese ramen brand among Taiwanese. However, what makes the authentic pork bone flavor from Kyūshū so popular in Taiwan? Perhaps it is related to dietary habits. 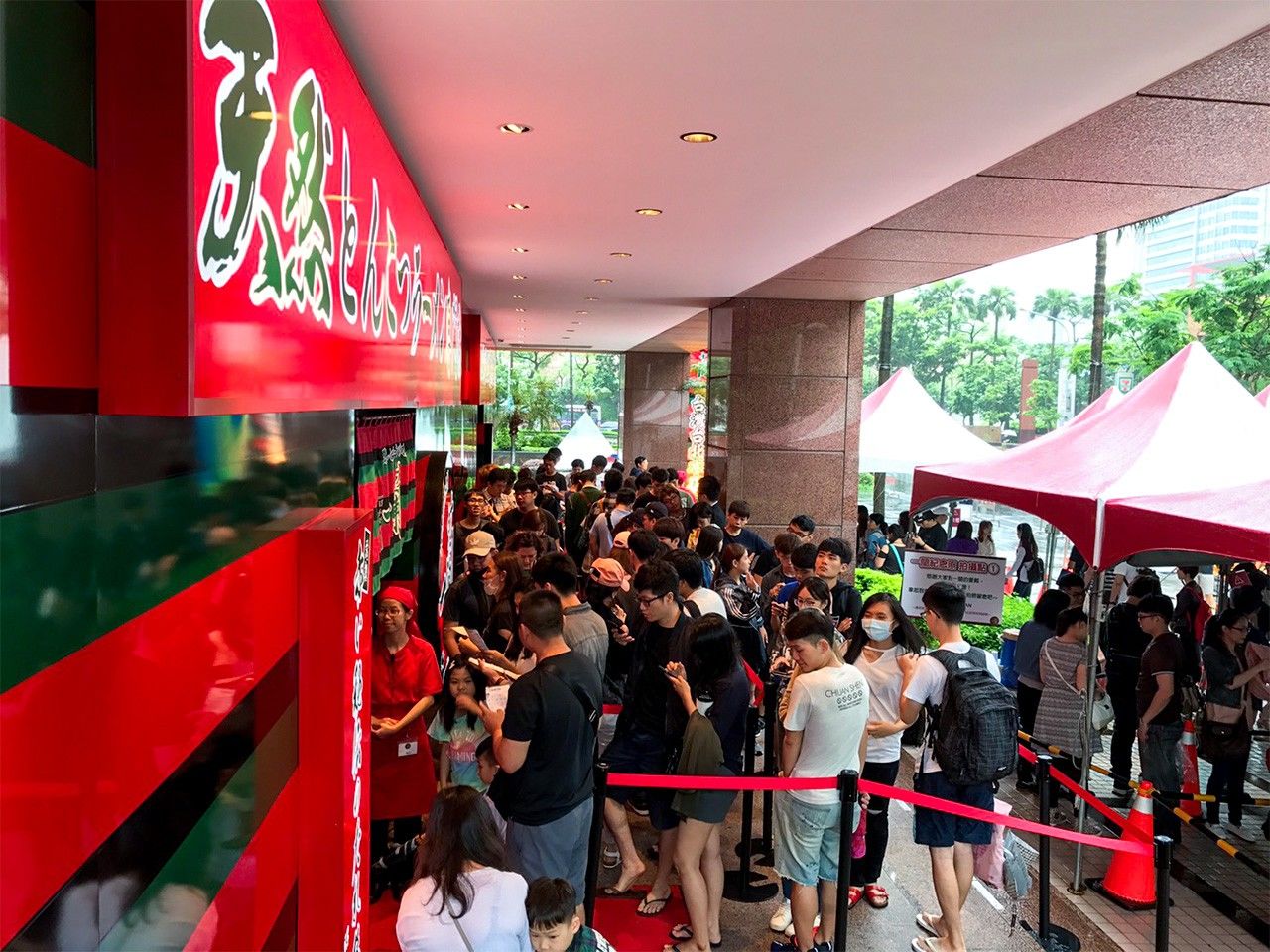 After opening its first branch in Taiwan, Ichiran saw a line that lasted almost two weeks. The photo taken on the day of opening, June 15, 2017. (Courtesy Ichiran Taiwan)

Taiwan’s cuisine is famed for luroufan (braised minced pork on rice) and beef noodles. The latter dish was invented after World War II by people who immigrated from the mainland with Chiang Kai-shek after the war, while the former is food that originated in Taiwan. Other dishes, including qiezai and yangchun noodles and lard-mixed rice, are all pork-based cuisines.

Similar to Taiwan, Fukuoka in Japan has also long had a pork-eating culture. Tonkotsu ramen and motsunabe (stew made with tripe or other offal) are among the region’s representative dishes. In 2008, when I was studying in Fukuoka, I hit it off with tonkotsu ramen despite having it for the very first time. I immediately started a tonkotsu ramen grand tour, eventually trying around 30 ramen restaurants within that year. Around that time, I patronized Ichiran twice a week or so.

Social Distancing and the Kaedama Culture 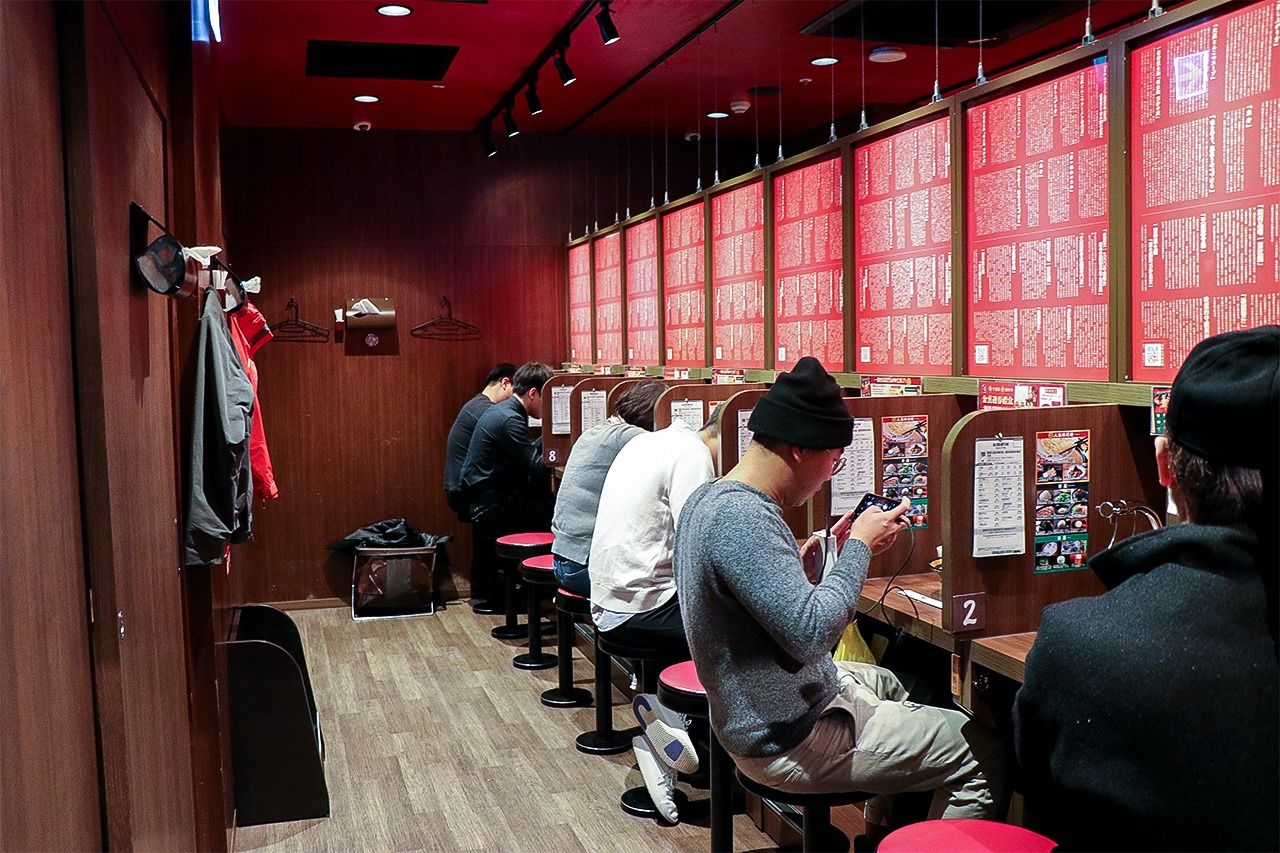 If you ask what makes Ichiran unique, one feature has to be the aji shūchū (focus on the flavor) counter. The dining counter is divided by wooden partitions so that everyone can concentrate on their own ramen, enjoying its own aroma to the fullest. When Ichiran opened in Taiwan, it brought this novelty to the Taiwanese people.

“It looks like a self-study room here,” customers said to Lin when they arrived in the dining area. The facilities were hard to figure out at first—some people even hung their luggage on the faucets provided in each stall for customers to get their own drinking water. Since each customer has to eat alone, even when people arrive as a group, they must eat separately. “Taiwanese people like to have meals together, but Japanese often go alone to eat ramen,” notes Lin. Taiwanese customers who prefer to dine in groups would occasionally complain about not being able to chat, he adds.

However, after the pandemic stormed the world, talking during meals became less welcome, and even the gregarious Taiwanese have become more comfortable eating alone. Nowadays, many restaurants in Taiwan and Japan alike feature acrylic partitions between the seats. This ramen restaurant, with its aji shūchū counter, accidentally became an originator of social distancing.

Another thing that was new to the Taiwanese was the kaedama system. This added serving of ramen to finish your remaining soup is the kaedama—literally the “replacement bunch” of noodles. When I was studying in Fukuoka, I didn’t know what it meant, so I ordered kaedama right after ordering ramen, and was told by the staff that it is only given afterward.

This system also took some time for Taiwanese to get used to. Ichiran Taiwan’s Lin recalls that at the beginning, some customers finished all the soup before calling for the additional noodles and were distressed that they could not add more soup. Moreover, Ichiran has another unique system—when adding noodles, you have to put a special plate on top of the kaedama order button installed at each seat and wait for the music to sound to get your extra ramen. This also surprised the Taiwanese a lot. Later, when the company made leaflets and put them on the seats to explain its practices, customers finally came to understand its ramen culture. 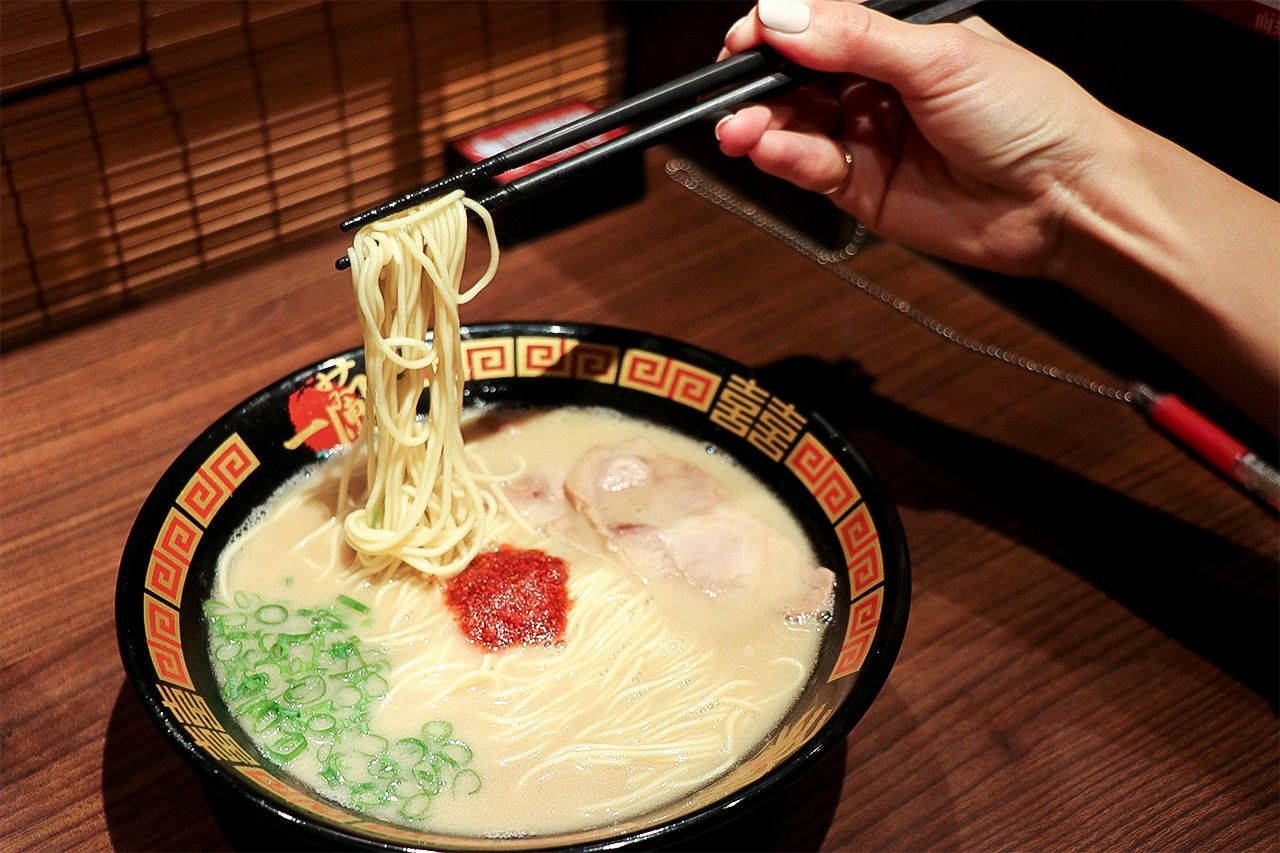 Despite having a higher cost, Ichiran insists on shipping its soup by air from Japan every day to ensure the original taste. (© Cheng Chung Lan)

Ichiran’s price was a surprise to many Taiwanese at first. Even in Japan, this shop’s ramen is on the higher side of the price scale; in Taiwan, it was close to 300 Taiwan dollars, or around ¥1,200. For this price, you could have a full Western cuisine meal at a relatively inexpensive restaurant instead.

The PR officer, Lin, explains that she understands the concerns of Taiwan people. “But our soup is delivered directly from Japan every day, so the cost is unavoidably high.” To maintain the high quality, the Japanese head office strictly controls the standard—after the soup is delivered to each branch, no diluting with water or any other processing is allowed, and even the water vapor must be captured and returned to the pot when the soup is heated, as Ichiran believes the vapor is part of the essence of the soup.

In addition to the original flavor, the head office also wields considerable control when it comes to choosing the location of new branches. As Lin explains, when Ichiran first looked at Taipei’s Central Business District, “Initially, the company considered Ximending, Yongkang Street, and the Eastern District, but to differentiate itself from other businesses, it finally chose the prime shopping area, Xinyi.” This seems no different from when American or European restaurants enter Japan and often choose Roppongi or Ginza to open their first outlets.

“Taiwanese customers will feel like they’re in a formal restaurant when they come here,” says another Ichiran PR officer, Chiang Yilian. Lin adds that sometimes eating ramen becomes a date for Taiwanese people, who want to take their time and have a good chat over their bowls. But in Japan, eating ramen is simple and quick, just like instant food—a way for a diner to replenish his or her energy in just 20 minutes. 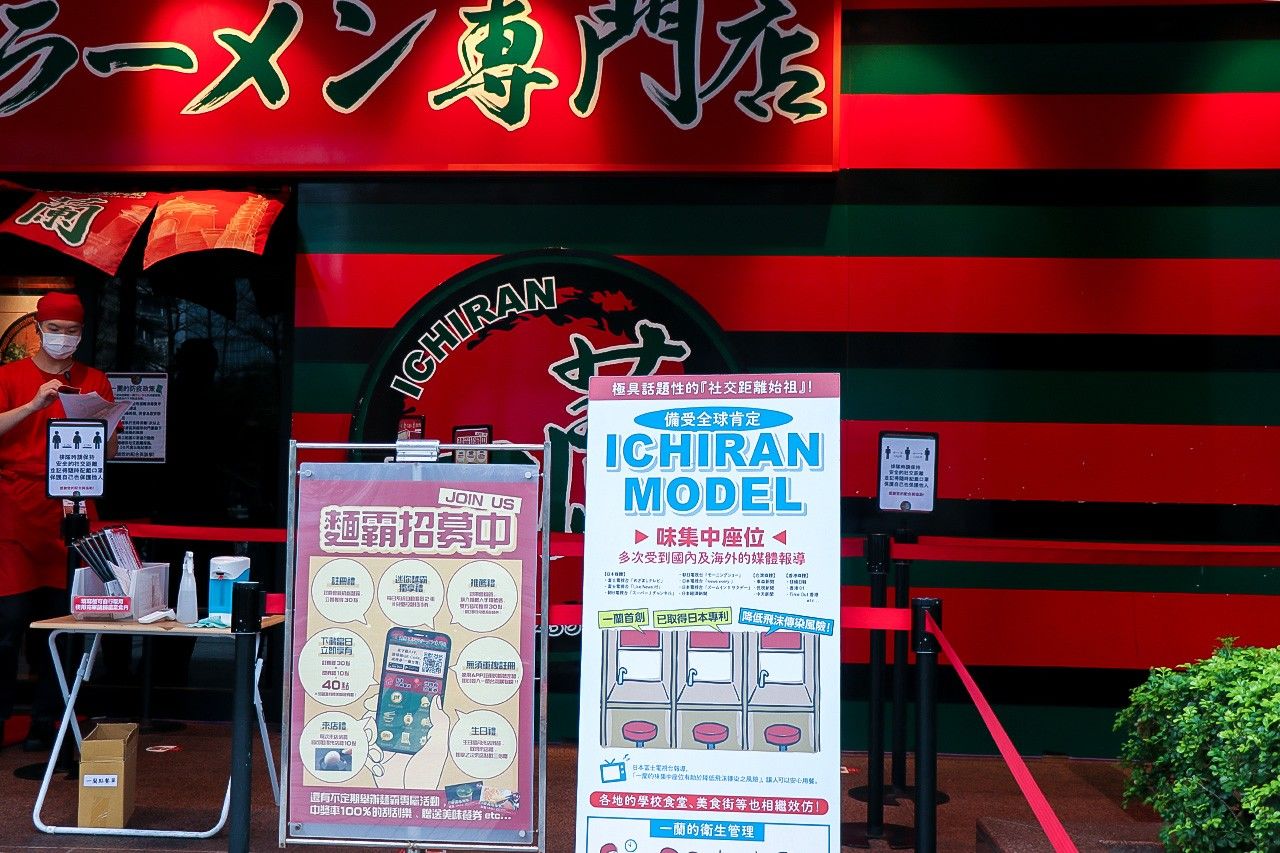 The taste of tonkotsu ramen is constantly promoted, with plenty of information at the entrance. (© Cheng Chung Lan)

Lin comments that the high acceptance of tonkotsu in Taiwan is also related to Taiwanese people’s preference for animal soups such as chicken and pork. Traditionally, Taiwanese people like the rich flavor of chicken soup. When compared to soy sauce, miso, and other plant- or fish-based stocks, pork-bone broth gives many Taiwanese a sense of familiarity.

In Fukuoka, there are two different types of traditional tonkotsu ramen, Kurume (named after a Fukuoka Prefecture city) and Nagahama (named for a district in the city of Fukuoka), each with its own characteristics. If you walk into a traditional restaurant, the deep smell of tonkotsu will hit your nose, and even the white walls are often slightly yellowed with an essence that has accumulated for decades. Although the locals are accustomed to it, the pungent smell can be a bit of a deterrent to some visitors.

As such, the Fukuoka-originated chaim has been advocating the reduction of the strong smell within its restaurants and improved tonkotsu flavor to make its offerings more easily accepted by the public. With such efforts, Ichiran has been able to expand from Fukuoka all over Japan. When I came to Japan to study in 2008, there were less than 20 branches, but now there are more than 80. Soon after, its ambition took it worldwide, and it opened branches in Hong Kong and New York. Eventually, in 2017, it marched into Taiwan and introduced its unique characteristics to the market. 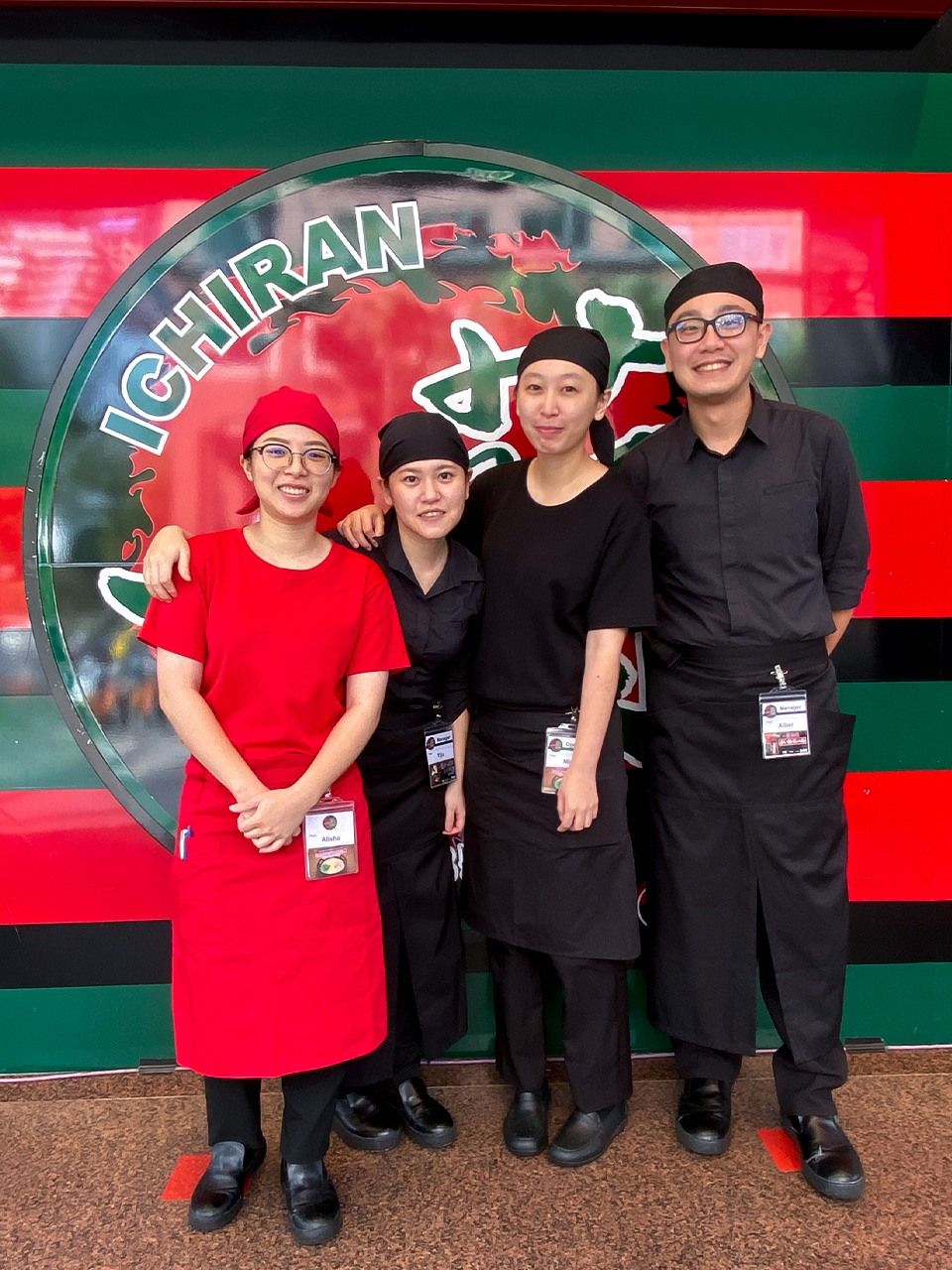 After stabilizing its operations in the Taiwanese market, Ichiran handed over the positions of store manager and assistant manager to local staff. (Courtesy Ichiran Taiwan)

Since opening its first store in 2017, the company has achieved remarkable results in Taiwan, reaching 1.5 million customers within two years and approaching 3.5 million by February 2021. “The Japanese have been very positive about the Taiwan branch and are glad that Taiwanese are willing to accept the tonkotsu taste,” says Lin.

Unlike other ramen brands, Ichiran shows great confidence and pride by selling only one type of ramen. It has still gained considerable popularity in Taiwan. While the New York branch was affected by the coronavirus epidemic and the Hong Kong branch experienced a decline in sales after its recent upheaval, Taiwan, which was free from political issues and pandemic interference in 2020, has become an important market to the Japanese company. 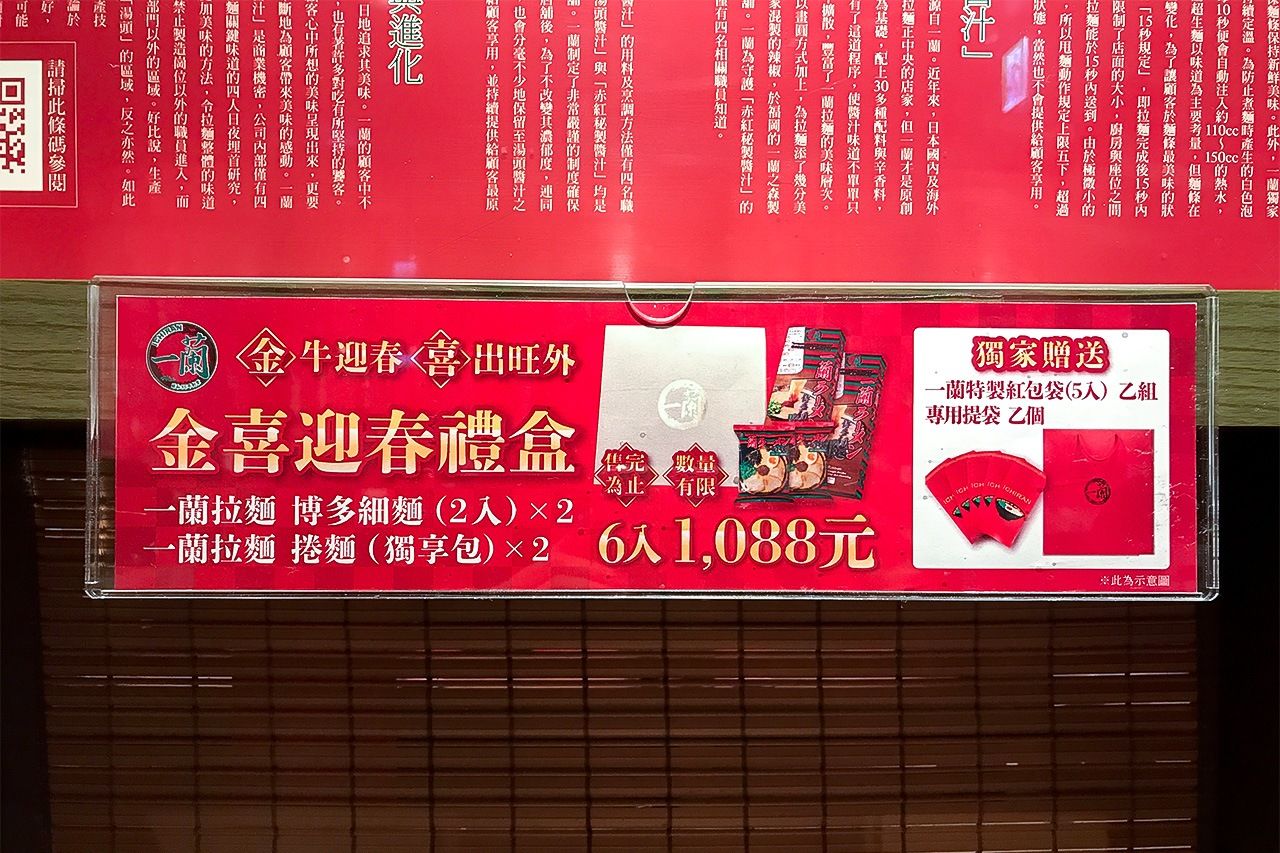 Lin divulged that the Japanese headquarters is also actively considering setting up branches in other counties of Taiwan, including New Taipei City, Taichung, Tainan, and Kaohsiung. When expanding to new branches, it is now the local company’s job to find ideal ways to promote Japan’s tonkotsu ramen and the Ichiran culture. “We are literally thinking of new ideas for slogans and promotions every day,” laughs Lin.

Diners in Fukuoka love eating their noodles al dente, and they call the hardest ones barikata. After getting used to the normal texture, Taiwanese people are willing to try harder noodles like barikata. And many of them are eager to buy noodle souvenirs for their friends and family. This is another subtle influence of Ichiran on Taiwanese people in terms of food culture.

“I hope people will think of us whenever they come to Xinyi, or whenever they want to eat tonkotsu ramen,” says Lin. This unique cuisine from Fukuoka has achieved remarkable results in the foreign land of Taiwan so far, but Ichiran has more aspirations and ambitions. And its future looks promising.

(Translated from Chinese by Leung Thomas King Tong as part of a Nippon.com internship program with Ritsumeikan University. Banner image: Ichiran enjoyed healthy business in 2020 despite COVID-19 and is loved by many Taiwanese customers. © Cheng Chung Lan.)