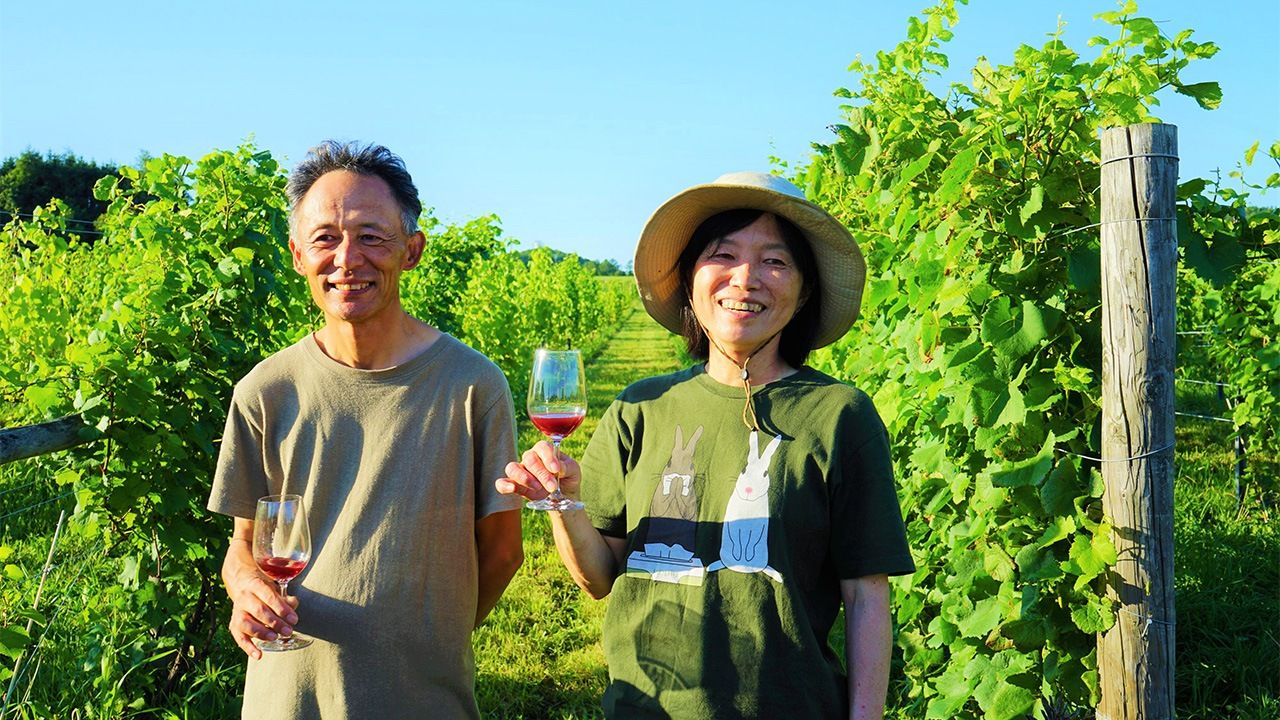 Grapes from the North: Hokkaidō Winemakers Take the Wine World by Storm

Economy Food and Drink Jan 23, 2023
The number of wineries in Japan has skyrocketed to around 400 over the past decade. Ingenuity and hard work have helped overcome climate handicaps like high rainfall and humidity, leading to high quality wines born of Japanese attention to detail. A look at four vignerons—farmers who grow grapes for wine—in one of Japan’s booming wine regions: the Sorachi area of Hokkaidō.

The Hands Helping to Grow a Wine Region

One autumn evening before the COVID-19 pandemic, Melanie Tarlant—fourth-generation head of the venerable French champagne house Maison Tarlant—was in Japan for a promotional event. At a Tokyo bar, she tried a glass of Japanese wine recommended by a friend and exclaimed, “Do you really make such wonderful wine in Japan?”

The wine was Vignes Chantantes Pinot Noir 2016, from Miyamoto Vineyard in Mikasa, Hokkaidō, and it came from vines only planted five years before.

The Sorachi region to the east of Sapporo centers around the cities of Mikasa and Iwamizawa. Over the last decade, it has exploded into one of the prefecture’s leading wine-producing areas, rivaling the town Yoichi to the west of Sapporo. Many of the producers there are small, making fewer than 10,000 bottles a year, but several brands sell out as soon as they are released. This contributes to their reputations as rare treats available only to drinkers lucky enough to stumble on them at shops or restaurants in Sapporo, thus boosting their appeal.

I visited Sorachi to tour some of these wineries. My first stop was Nakazawa Vineyard in the Kurisawa district of Iwamizawa district.

Nakazawa Kazuyuki and his wife Yuriko opened their small vineyard—just 2.7 hectares of grapes, growing on a gentle, south-facing slope—in 2002. Their flagbearer is the white wine Kurisawa Blanc, a bottle that could well be considered the top of any list of Sorachi’s hard-to-get wines. This label’s quality is said to have inspired several others to try their own hand at wine production in the region, making it a flagship of sorts for Sorachi wine.

I had the good fortune to sample Kurisawa Blanc next to field of grapes just beginning to take on color. It was a 2020 vintage, and began with eye-opening aromas of white flowers, citrus, and passion fruit mingled with something like honey. It had herbal and forest tones, as well, creating a thickly layered aroma. On the palate, it expressed bright acidity and left behind a wistful, delicately bitter finish. 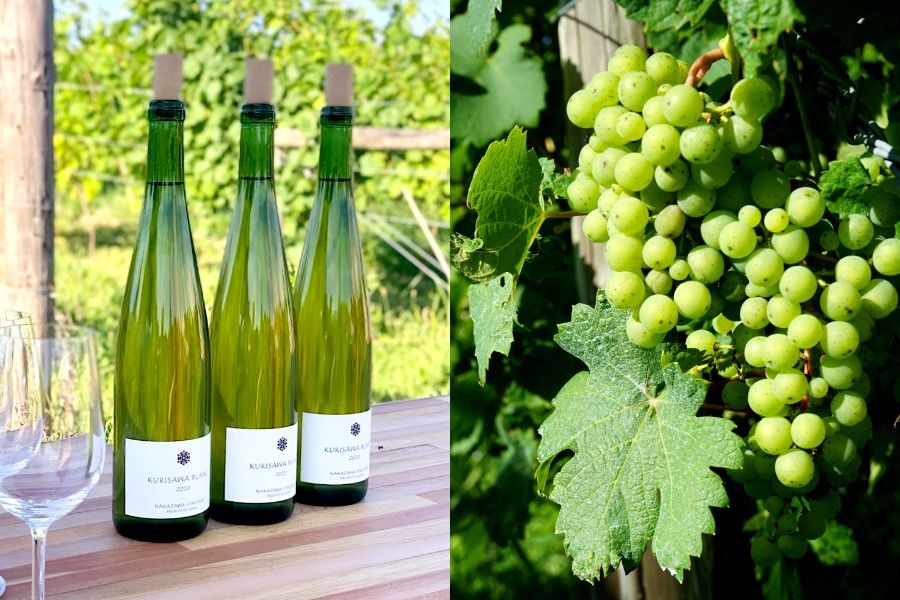 This wine is made from a blend of various grape varietals. The key one is Gewürztraminer, an aromatic grape from the French Alsace region.

“This grape can withstand the harsh local winters and ripens well to produce a gorgeous aroma,” says Kazuyuki, who noted Gewürztraminer’s aptness for the Hokkaidō climate while growing a number of varieties for a major winemaker earlier in his career. “Grapes produce their best flavors at the cold limit for each variety.”

That concept represents both hope and pressure for Sorachi’s wine makers. For above all, Hokkaidō’s winter serves as an enemy to grapes. At the same time, the vintners also know that the annual snowfall of over 100 centimeters actually helps protect the vines from freezing to death. Here, the vines are intentionally allowed to be buried by snow, either by trimming them low or by inducing branches close to the ground. This is done because even if atmospheric temperatures drop well below freezing, beneath the snow it will never fall below –7ºC or so, which allows the vines to survive the winter without frost damage.

Kondō Yosuke of Kondō Vineyard teamed up with the Nakazawas to build the Kurisawa Wines winery. We visited the Moseusi field spreading out around the facility.

“We started planting grape vines here in 2011. We have two more fields at Tap-kop in Mikasa, which we started planting earlier in 2007,” says Kondō. While Moseusi is open and on a gentle slope, Tap-kop is surrounded by forest on a steep slope, so the grapes produced at each are very different. Kondō makes a wide variety of wines by using each grape on its own or by blending them. One unusual characteristic of his fields is a “mixed zone,” where he has planted a mixture of eight varieties including Pinot Gris, Auxerrois, and Chardonnay, which are vinified together after a single harvest—an approach that can bring out the fullness of the terroir of a certain grape-growing region. 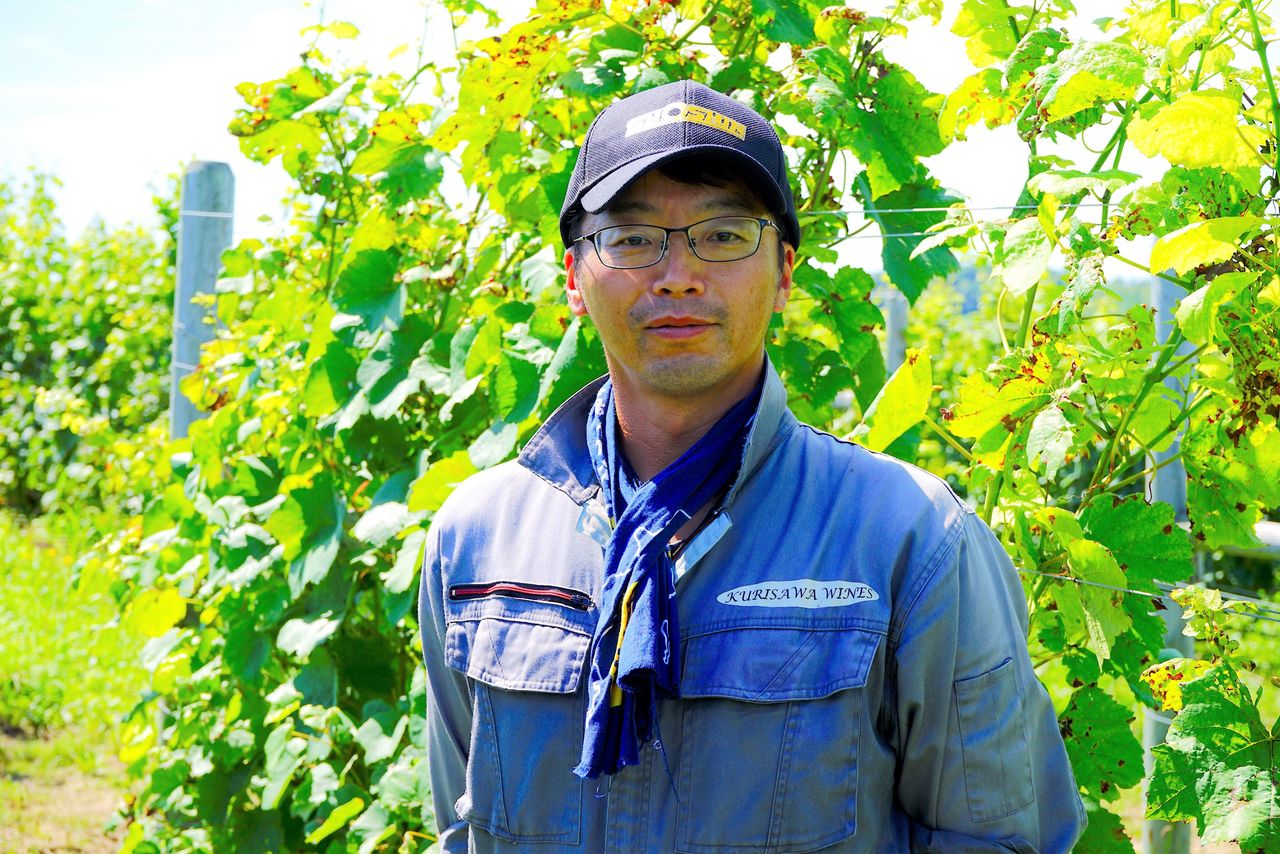 “I contracted with 10R Winery to vinify my grapes until we built Kurisawa Wines in 2017,” says Kondō.

10R Winery stands at the epicenter of Sorachi’s dizzying growth into such an outstanding wine-making region. It offers custom crush facilities, meaning it processes and ferments grapes grown by other vineyards on contract, a rarity in Japan. The owner there is expert American winemaker Bruce Gutlove, who came to Sorachi after working as a vintner and consultant at Coco Farm Winery in Ashikaga, Tochigi Prefecture. He has provided a place for emerging vignerons without their own vinification facilities and has also supported them by generously sharing his skills. Both Nakazawa and Kondō studied under Gutlove’s tutelage before venturing out to start their own vineyards. 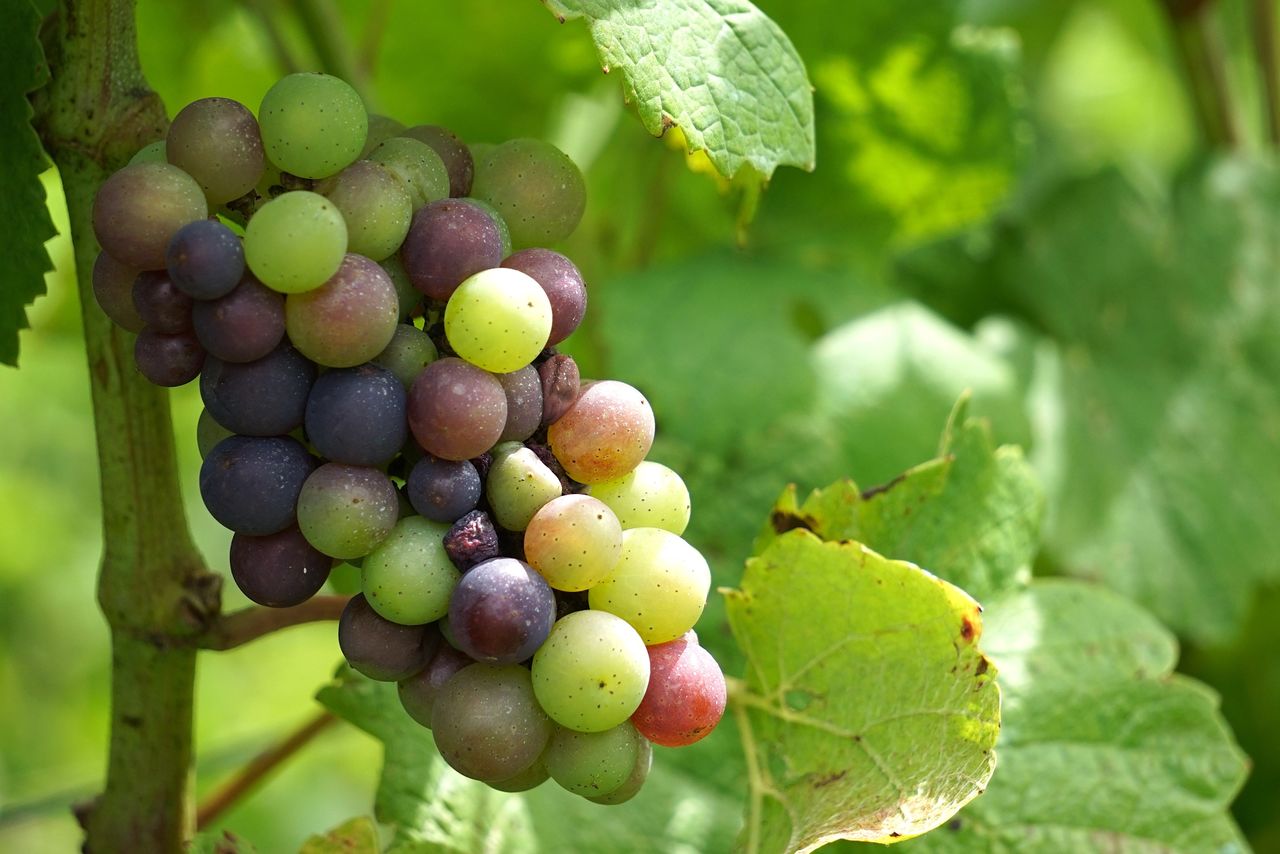 Pinot Noir grapes starting to take on color in the fields at Moseusi. (© Ukita Yasuyuki)

Kondō also showed off his vinification cellar at Kurisawa Wines.

There, he has buried several kvevri, which are earthenware pots used to ferment and age wine like those in one ancient home of wine, eastern Europe’s Georgia. The archaic flavors this produces have proved to be eye-opening and addictive for many modern drinkers.

A sip of Kondō’s wine offers a mysterious sensation. Whether a red made from Pinot Noir alone, a white made from mixed planting, or a kvevri-fermented orange wine (a white wine made in the red wine style of fermenting with the grape skins on), all of his wines are smoothly drinkable yet deeply nuanced, hinting at a wider world existing just beyond the horizon. 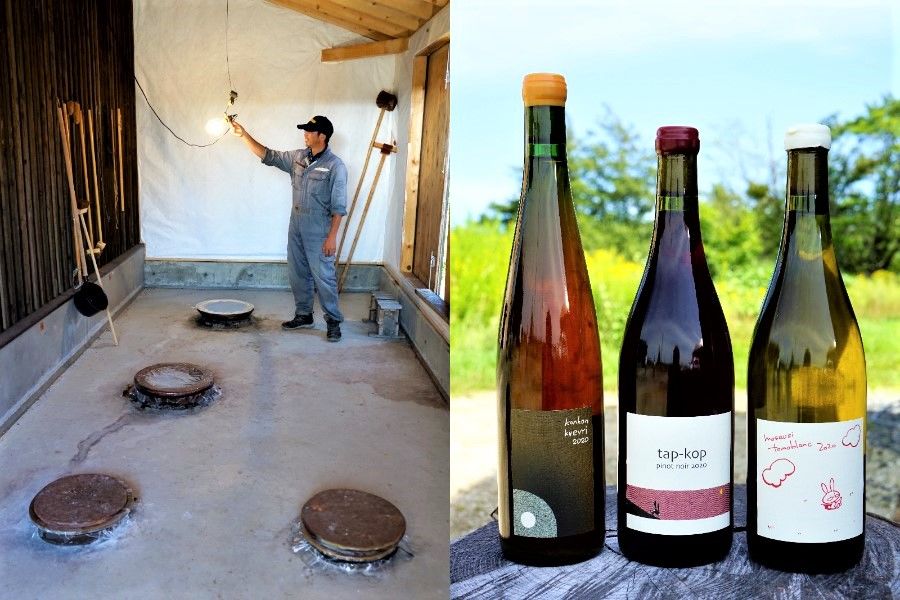 The Struggle to Stay Natural

Some 10 kilometers to the north of Kurisawa Wines stands Chiba Vineyard. Chiba Shinji and his wife Eri purchased this land in 2014 and planted it with varietals like Zweigelt, Kerner, Pinot Gris, Bacchus, and Pinot Noir.

Shinji was formerly a tour guide in Canada, but moved to Europe in search of a new life.

“I ended up staying at a winery in Würzburg, in the Franconia wine region of Germany, and fell in love with a life lived with wine and grape fields,” he says. After returning to Japan and training at Obuse Winery—run by Soga Akihiko, a pioneering figure in the rise of Japanese wine—in Nagano Prefecture, he eventually ended up in Sorachi. 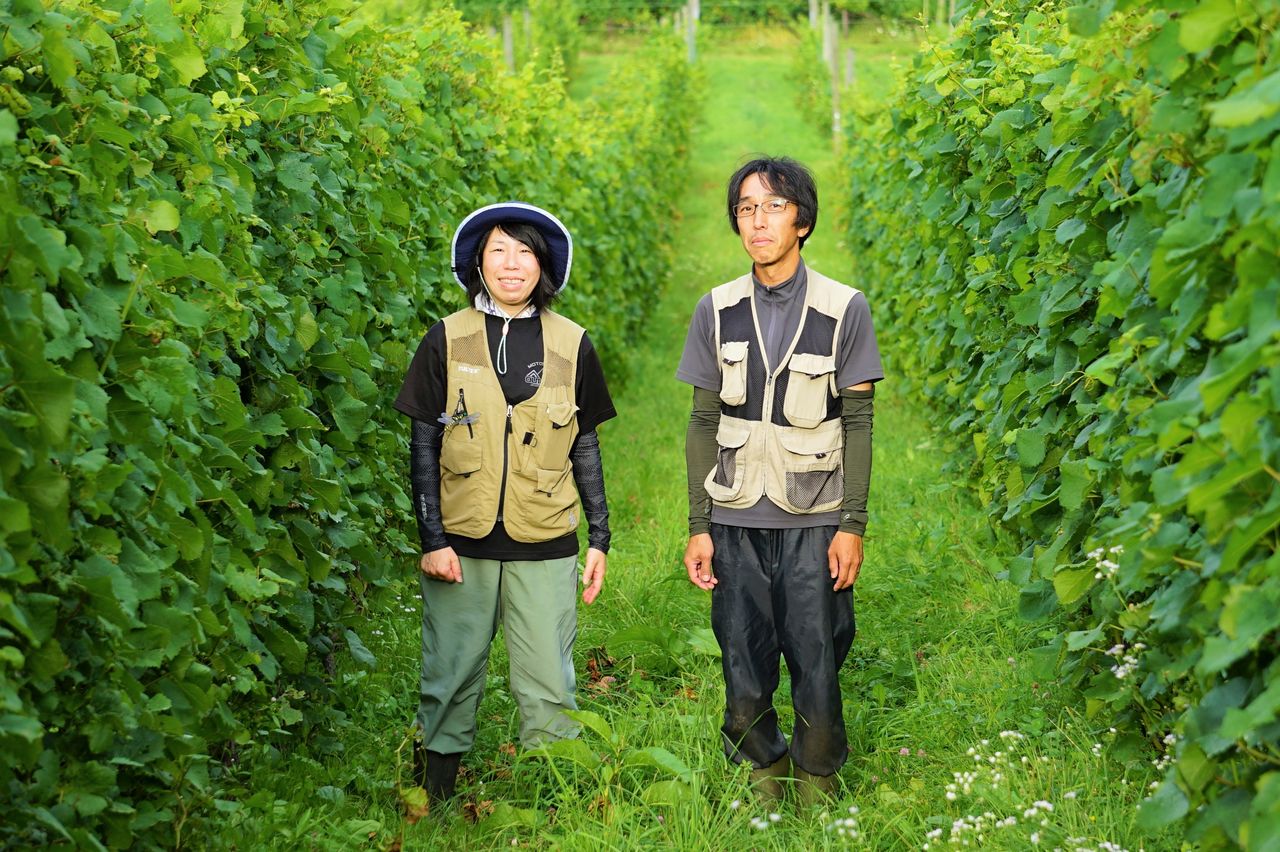 The Chibas, Shinji and Eri, of Chiba Vineyard. (© Ukita Yasuyuki)

I first met the Chibas in late 2017, when I had the fortune of being there for the uncorking of their first bottling, made that spring, and I have visited regularly ever since. They’ve shared many amusing stories of their adventures in winemaking, such as the time they planted what they thought were white Riesling grapes, only to see dark red fruit appear on the vines later on. “We’re mostly focused on keeping the vines alive and not freezing, rather than on the quality of the fruit,” says Shinji, offering a glimpse at the realities of grape cultivation in Sorachi.

Then the talk turned to animal damage. Fruit-eating deer and raccoons are pests, but the greater danger are rabbits, which chew on vine trunks and shoots. Even putting up electric fences does not help, as they cleverly tunnel under. “There have been times when the ground was completely white with chips left by rabbits chewing on the trunks,” says Shinji. As he spoke, a rabbit appeared as if by magic, and the smile vanished from his face.

Chiba’s wines have a crisp acidity and earthy minerality. Both the red and white are rather thin, but they linger on without breaking off too soon, and I find I want to stick with them. 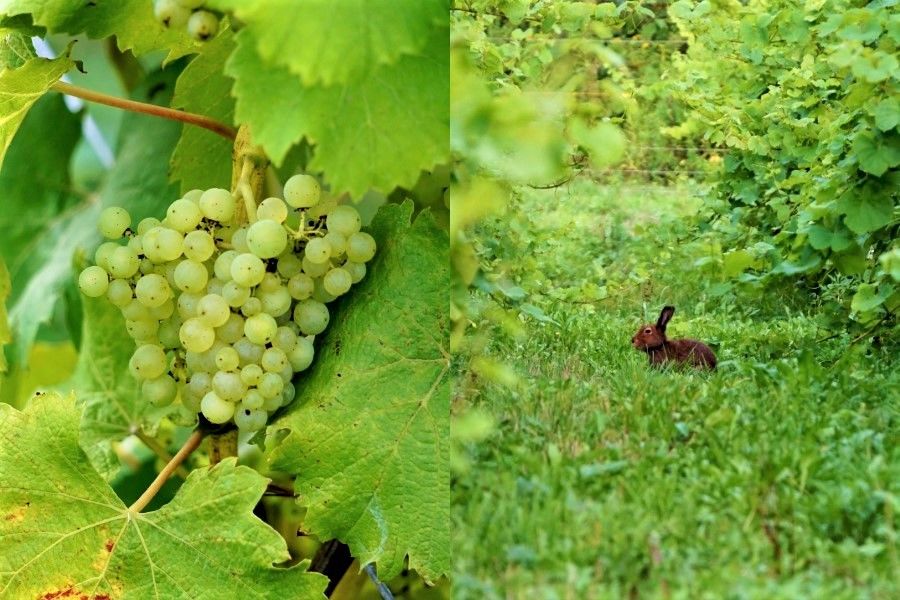 Like the Chibas, Miyamoto Ryōhei of the Miyamoto Vineyard also trained at Obuse Winery. He previously worked as a chef and pâtissier, but he never forgot the charms of the wine he encountered in Bordeaux during his student days, and eventually set out on the wine-making path himself. In 2012, he cleared a patch of forest on Mikasa’s Mount Tappu and planted varietals including Pinot Noir and Chardonnay. 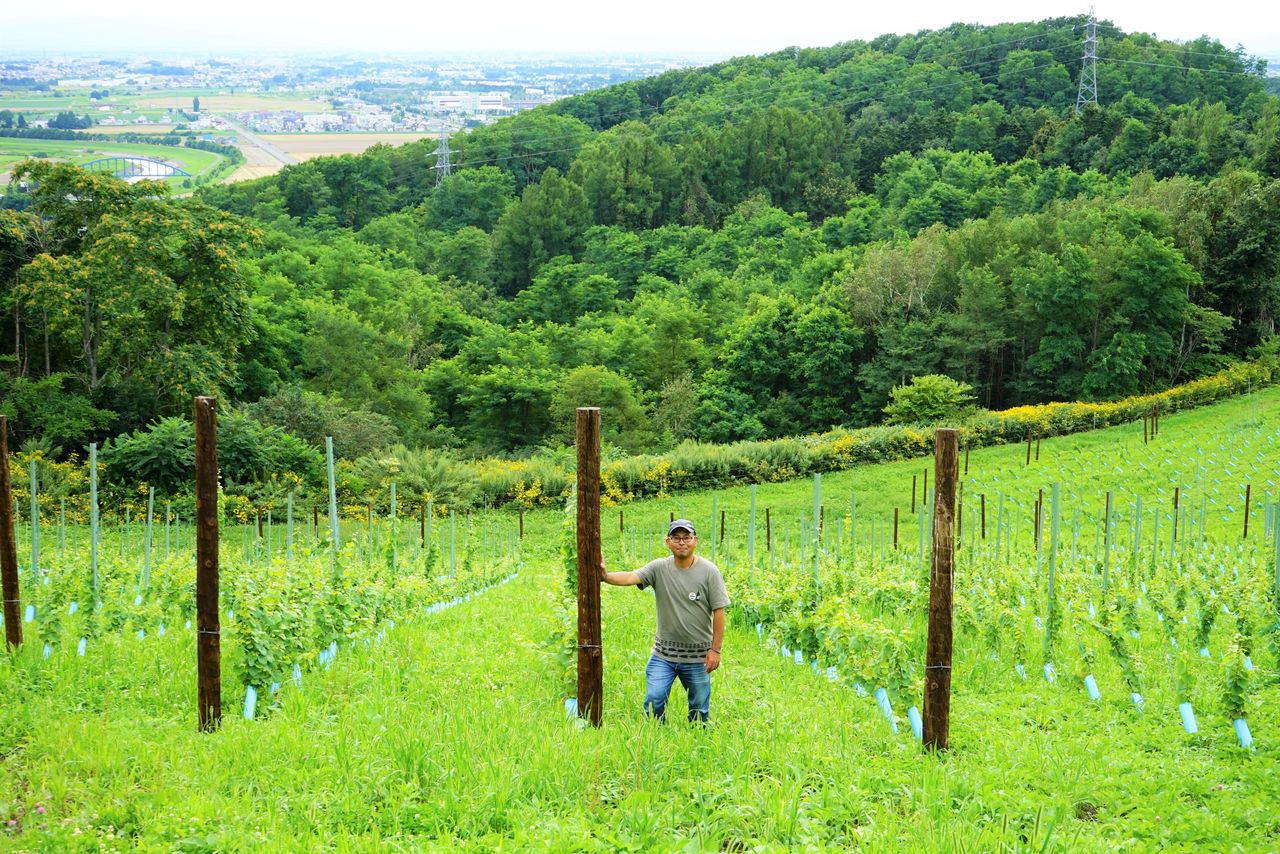 Kyūshū-born Miyamoto chose to move to Hokkaidō after Obuse Winery’s Soga Takahiko started making Pinot Noir wine there. Takahiko, younger brother to Akihiko, now runs Domaine Takahiko in Yoichi. His Nana-Tsu-Mori Pinot Noir 2017 was selected for the wine list at Copenhagen’s Noma, considered the best restaurant in the world. “I had spectacular grapes to go into that,” he recalls. “I was also inspired by Nakazawa-san’s Kurisawa Blanc—if he could achieve something like that, then I had to try as well.”

Miyamoto’s white wines, like the 100% Chardonnay Prism and Entre Chen et Loup, a blend crafted around Pinot Gris, are well worth drinking. But he himself is most particular about his label Volonte, a 100% Pinot Noir. He has pursued a long road of trial and error, from selecting root stock and clones at the start, through to fermentation and extraction, in pursuit of the ideal wine.

I was able to sample Volonte 2019. It brings pure red-fruit notes and full-bodied dried apricot aromas in equal measure. On the palate, it’s juicy but in no way light. Despite having been in the bottle for just over two years, it boasts a depth to rival anything laid down for a decade or more. It is mystifying how wine made in such cold climates can bring such warmth. 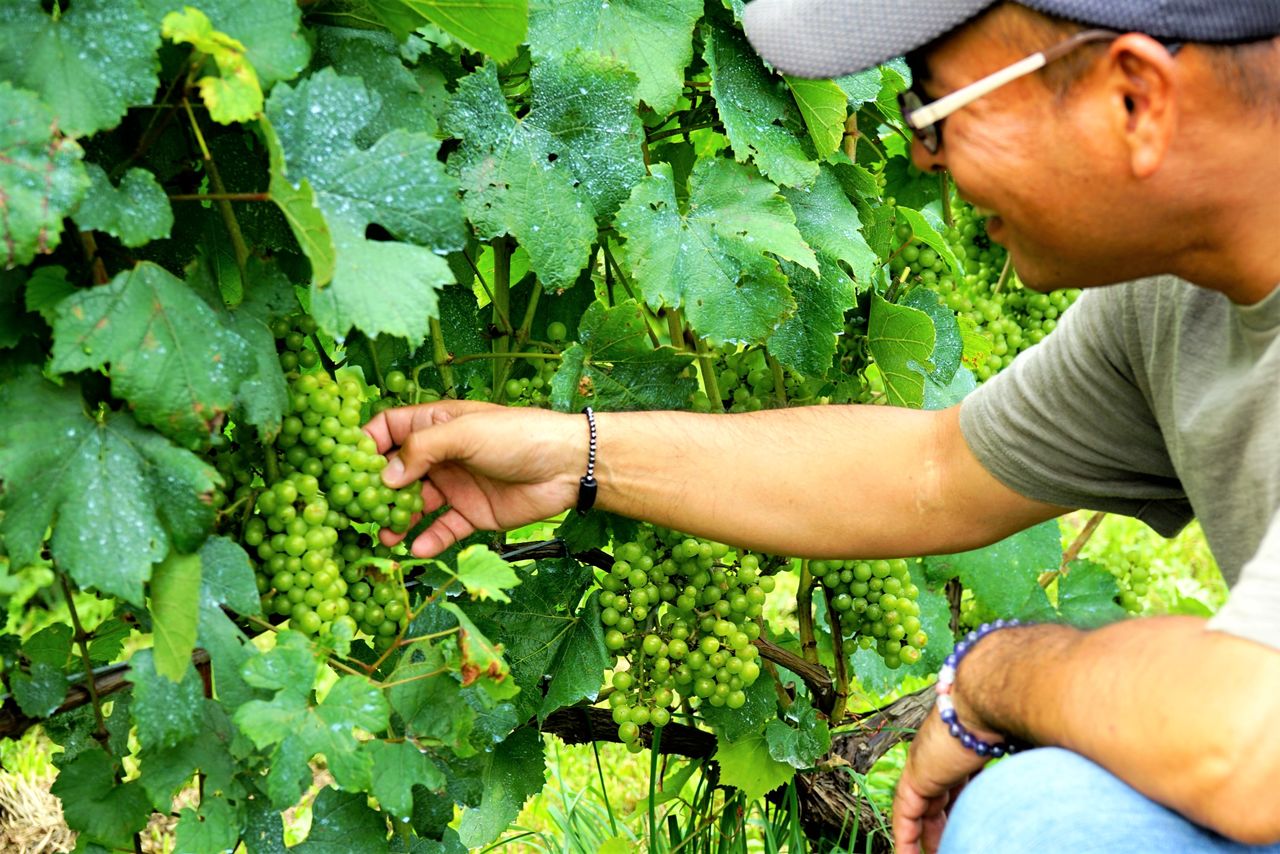 Miyamoto and the clone MV6, which he considers the cornerstone of his Pinot Noir. This clone is said to have roots in the Clos de Vougeot grape of the Burgundy region of France. (© Ukita Yasuyuki)

The common thread shared by the four vignerons I visited in Sorachi was their natural approach and willingness to work hard for their wine.

To avoid using artificial fertilizers and agricultural chemicals as much as possible, they get into the fields and use their own hands to work with the grapes. They ferment the wine slowly with native wild yeasts and keep human intervention to a minimum throughout. This all allows the wine to reflect the climate and the year, to create something that seems to meld with your whole body when drunk.

That sense of melding with the body, along with the signature, clean flavors of Hokkaidō wine, mean it fits perfectly into global cuisine trends. I’m sure that is going to bring Sorachi wine even more recognition and success.