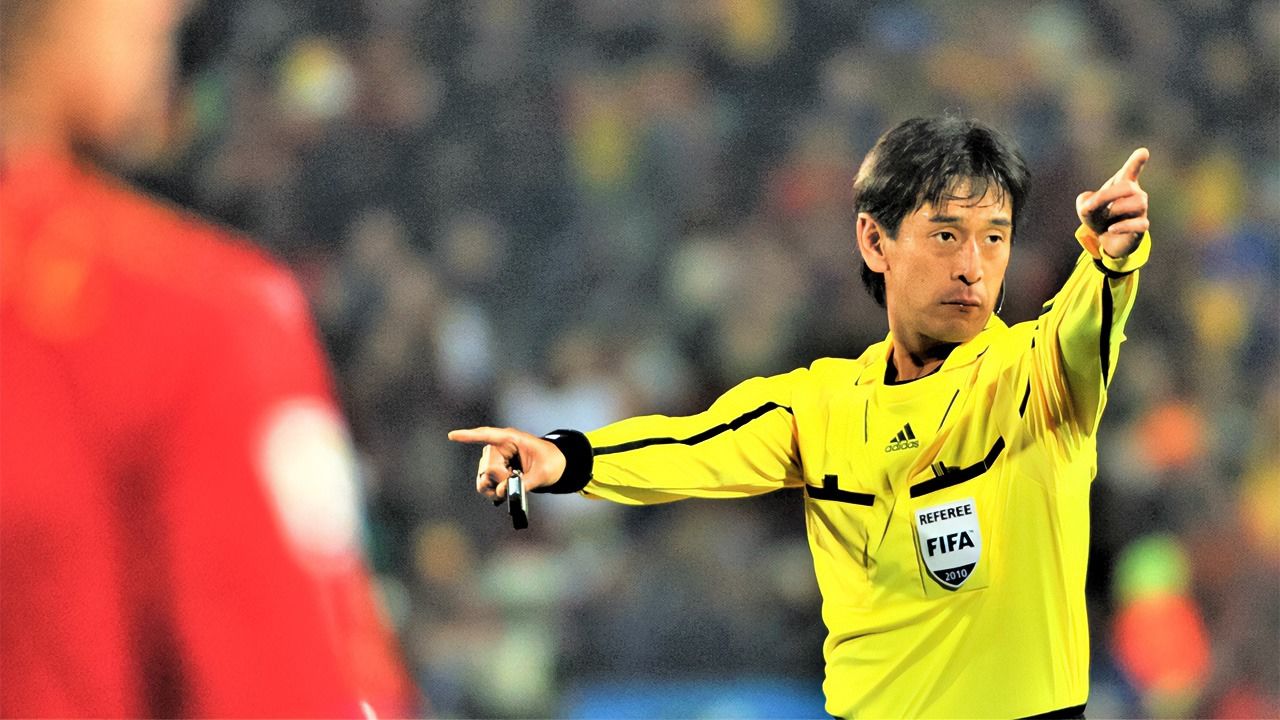 Japan’s Innovations in the Sporting World

Economy Technology Sports Jan 24, 2023
The Japanese sports equipment firm Molten manufactures one of the most popular whistles among soccer World Cup referees. With ever-expanding functionality, Molten whistles are breaking into volleyball and other sports.

The global volleyball, basketball, and soccer ball manufacturer known as the Molten Corporation has an unusual practice once every four years. Once the soccer World Cup begins, employees of the Hiroshima-based firm become particularly active on the instant messaging service Line.

“That referee is using one of ours!”

“They’re using ours in this game, too!”

Nakamori Shintarō of the company’s PR department explains what they are talking about.

“There are no rules stipulating what kind of whistle referees have to use at World Cup games, so referees can use whatever kind they like,” he explains. “So, our employees take it upon themselves to see whether the referees are using our Valkeen.”

Molten employees remain glued to their TV sets during games in spite of the fact that the games are broadcast late at night due to the time differences. They post messages quickly, almost as if they are on a game show, every time they spot—or think they spot—a referee using a Valkeen whistle.

The Molten Valkeen whistle, at left, and the Valkeen soccer pro set. (Courtesy of Molten)

The “whistle check” tradition began with the 2010 World Cup held in South Africa.

A year prior, in 2009, Molten started developing whistles for different sports, after some in the company pointed out that due to differences in the size of the playing environment where the whistles are used, along with differences in the way referees hold their whistles, there was a need for tools specifically designed for each sport.

As it did with its professional sports balls, Molten put many years of effort into its whistles. In 2000, soon after the company’s founding it launched its Dolphin Pro whistle, which featured a sharp tone that was suited for use by referees.

“When developing the whistle,” explains Nakamori, “we were mainly focused on two elements: the sound and the operation. Of these two, though, it was the sound that we felt was more important. Since the final match in South Africa was to take place in a stadium holding approximately 100,000 people, we designed the whistle so that its sound could be heard over the shouting of that many people.”

Nakamori goes on to describe the characteristics of the sound required for soccer games.

“There are two types of sounds that referees need to be able to make: a warning and a signal. The warning is a sharp succession of short bursts that indicate someone on the field has done something dangerous. The signal is used to mark the start and finish of play and has to be a strong yet calmer sound. Since soccer involves a lot of contact between players, a sharp burst type of sound is required to get them to immediately stop any dangerous activity. Here, the term ‘sharp’ means that the sound has to hit its highest volume almost immediately. If the message to cease the activity is delayed by even a few tenths of a second, this can have a major impact on the game. Thus, the referee has to be able to make a powerful, sharp whistle sound that fills the entire stadium in an instant.”

Sound was not the only concern. The product development team analyzed referees’ movements in order to make the whistle easier to use. This analysis resulted in the development of the “flip-grip,” a feature that allows the referee to flip the whistle into a usable position instantly.

“Generally, soccer referees attach their whistle to their wrists using a strap and let the whistle hand loose when they are not using it,” said Nakamori. “This means that when they want to use it during play, they have to go through several motions before they can get it in position in their mouths. This takes time, which then is a source of stress. The flip-grip solves this problem.” 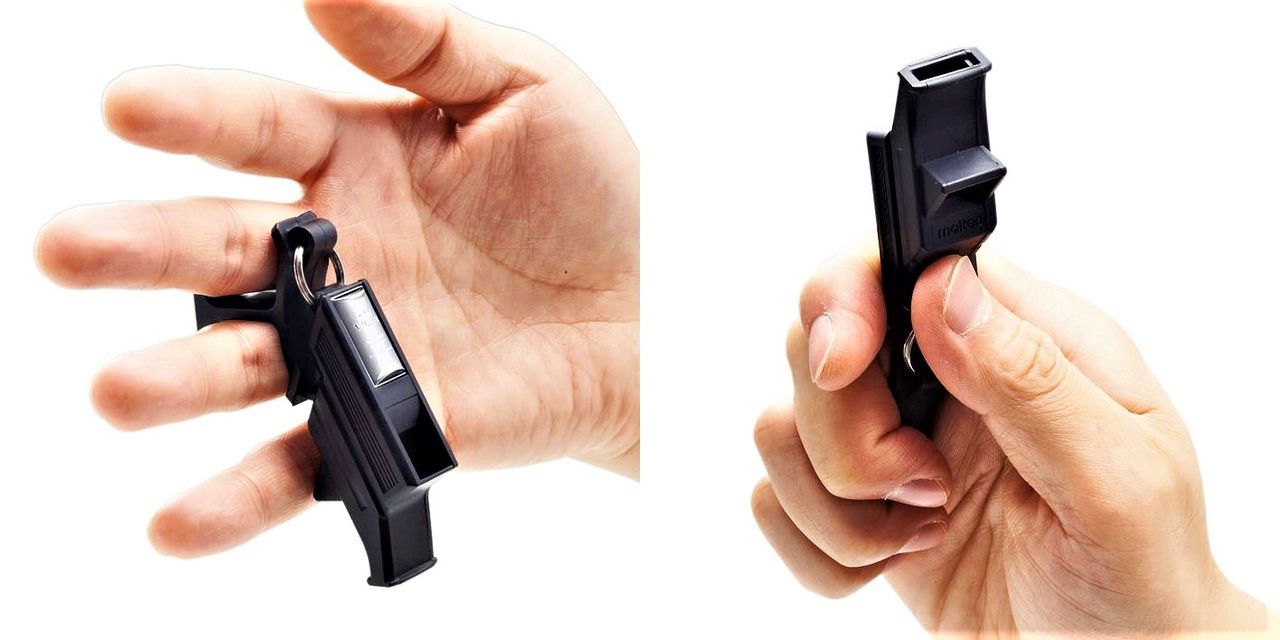 The flip-grip allows a referee to instantly flip the whistle into a usable position when held between the middle and ring fingers. (Courtesy of Molten)

After testing over 100 prototypes, they finally hit upon what is now known as their pro-soccer whistle. Its shape was modelled after the peregrine falcon — a kind of hawk — which in Dutch is called valk. The second half of its name, keen, is an English word that calls to mind its sharp sound. Thus was born the Valkeen whistle.

The Valkeen whistle was prominent at the 2010 World Cup. The South African folk instrument known as the vuvuzela was in constant use at all the venues during the tournament, its droning shrill drowning out most other sounds. Although this meant players were not always able to communicate effectively with each other, they were still able to hear the sound of the Valkeen. And so the whistle made a major contribution to the smooth management of play on the field.

Nishimura Yūichi, one of the people who provided feedback to the product development team, served as referee at four of the games during that World Cup. He had high praise for the Valkeen and even used it during the finals, when he was the fourth official.

After gaining attention at the 2010 tournament, the Valkeen came to be used by referees around the world. It was used at over 30 of the 64 games played during the World Cup in Russia in 2018. Today, the Valkeen has become the de facto standard soccer whistle.

Each of these whistles is specifically designed for the environment and type of competition for which it is intended. For example, the Blazza is designed so that it can be held in the mouth of a referee who is calling a basketball game while running alongside the players.

“Basketball referees keep their whistles in their mouth while running,” explains Nakamori. “So we shifted the center of balance of the whistle to the mouthpiece to reduce wear and tear on that portion of the whistle. Once we discovered that whistles used by basketball referees often cracked at the mouthpiece as a result of being bitten down on forcefully from time to time, we decided to strengthen the mouthpiece in order to prevent this. A titanium mouthpiece coated in flexible plastic is fused to the hard plastic body of the whistle. This piece has the same 6 millimeter thickness of other whistles, but it features both a softness that’s suitable for biting down on and durability that prevents breakage.”

The Deevo volleyball whistle features fins on the left and right sides of the whistle so that the sound is audible on both sides of the referee who is blowing it. The Vorca whistle, designed for handball, is based on the flip-grip but tailored for handball referees, who have to switch hands numerous times during a match. The sound of each whistle is optimized to the sport for which it is intended, as are its features. This combination has made all of these Molten products long-sellers that play a major roles in games held around the world.

“We wanted to make whistles that are able to express 100 percent of what the referees need to communicate during actual play,” says Nakamori. “Our company has always pursued the highest quality craftsmanship, and we want all our products to solve actual problems that exist in the world of sports.”

The World’s Only Assembly-Type Soccer Ball

Although it remains focused on solutions to problems in the sports world, Molten has recently expanded its scope to encompass broader questions of sustainability. The quintessential product of this new type is the My Football Kit, a soccer ball with a unique build-it-yourself feature.

The 54 separate parts of the My Football Kit are made of a synthetic resin consisting of recycled polypropylene and olefin elastomer. (Courtesy of Molten)

The My Football Kit came out of a desire to create new opportunities to support the growth of children via soccer and attempt to solve environmental problems at the same time. Uchida Jun of Molten’s Sports Operations Headquarters explains:

“Around three or four years ago, people realized that a company couldn’t hope to maintain its growth if it ignored social problems. When thinking about what we could do in this area, we decided we could play a role in two of the United Nations’ seventeen Sustainable Development Goals: quality education and responsible consumption and production. While many organizations are involved in efforts to provide for free old balls and footwear to children without the means to obtain these items on their own, the fact is that you are just giving things away when you do that. That doesn’t really contribute to any real change. Our idea was to create a soccer ball that can be assembled by the players themselves, providing opportunities for children to participate in sports and have an educational experience as well.”

The My Football Kit is not on sale to the general public. How does the company get these kits to the kids who need them? One way is for corporations that see the value in this effort to order the kits and make them available via sports workshops held by NPOs and other organizations. This gives children opportunities to engage sports while the corporations form partnerships the organizations, thus fulfilling one of the goals.

“We held a workshop for Thai and Burmese children at an event in 2020 that was sponsored by Toyota,” said Uchida. “The children of those two countries naturally started communicating with each other as they had to figure out how to assemble to balls. Then, they played soccer with the balls they had made. It was a fantastically effective event. In countries that are economically disadvantaged, the My Football Kit plays the role of an educational toy that provides the added thrill of being a real, three-dimensional object and that gives the children a sense of accomplishment once they finish the assembly. Disparities in opportunity and experience are increasing problems in today’s world, but we hope that the My Football Kit will help solve these problems.”

(Originally published in Japanese. Banner photo: Nishimura Yūichi, a referee at the Spain-Honduras game during the 2010 World Cup in South Africa, holding a Valkeen whistle on June 21, 2010. © AFP/Jiji.)