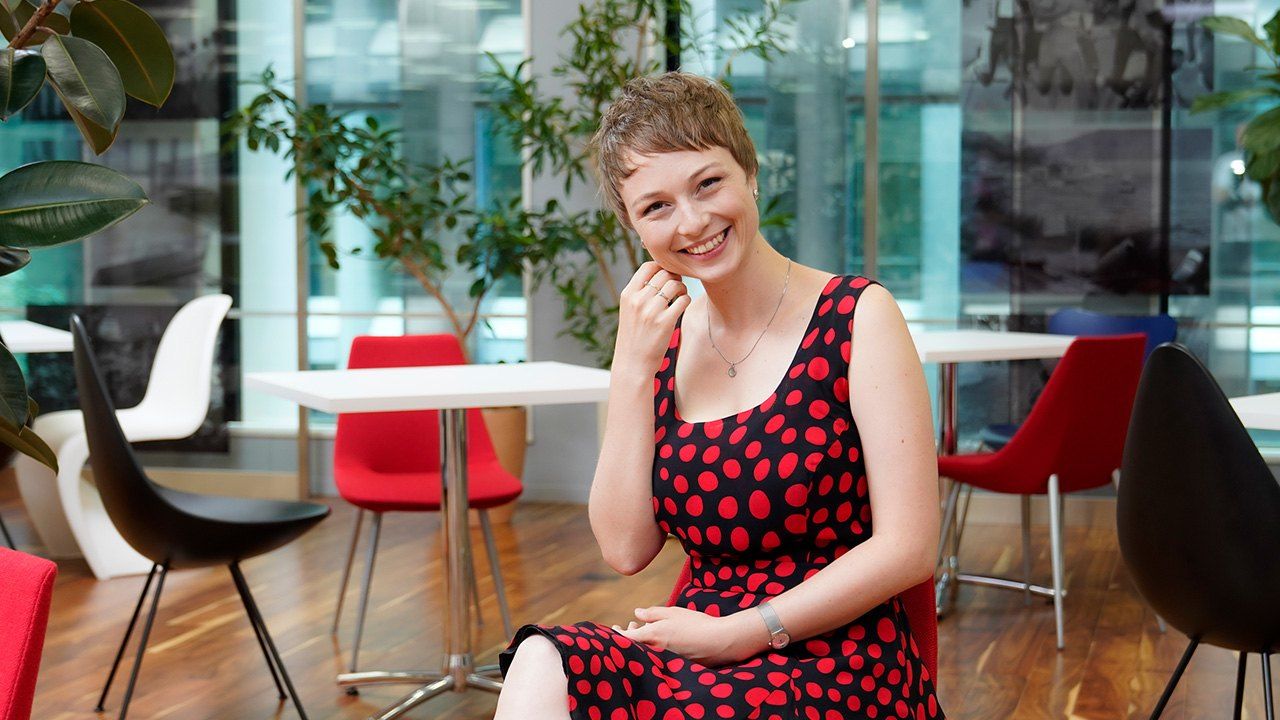 Culture People Arts Language Sep 9, 2021
Anna Cima’s innovative debut novel I Wake Up in Shibuya has been translated into several languages, including Japanese in 2021. The Czech author, who is working on her doctorate in Tokyo, talks about the background to the book and how she became interested in Japan. 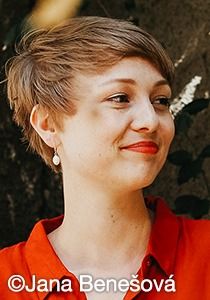 Born in Prague in 1991. After earning her degree in Japanese studies from Charles University, continued her studies in Japan. Made her writing debut in 2018 with Probudím se na Šibuji (I Wake Up in Shibuya), which won the Magnesia Litera Award in the Discovery of the Year category, the Jiří Orten Award, and the Czech Book Award. Also active as a translator from Japanese.

The Prague Jana and the Shibuya Jana

Czech writer Anna Cima’s debut novel Probudím se na Šibuji (I Wake Up in Shibuya) is a hip, vibrant story of youth, and a “tale of two cities,” connecting Prague and Tokyo across time. It is also an invitation to Japanese literature. When the innovative, multilayered narrative was released three years ago in the Czech Republic, young readers made it into a bestseller. Translations went on sale in Germany, Hungary, Spain, and other European countries, before a Japanese version appeared in April 2021. While Czech writing is little known in Japan, after just a few months, Cima’s novel went into a second edition. 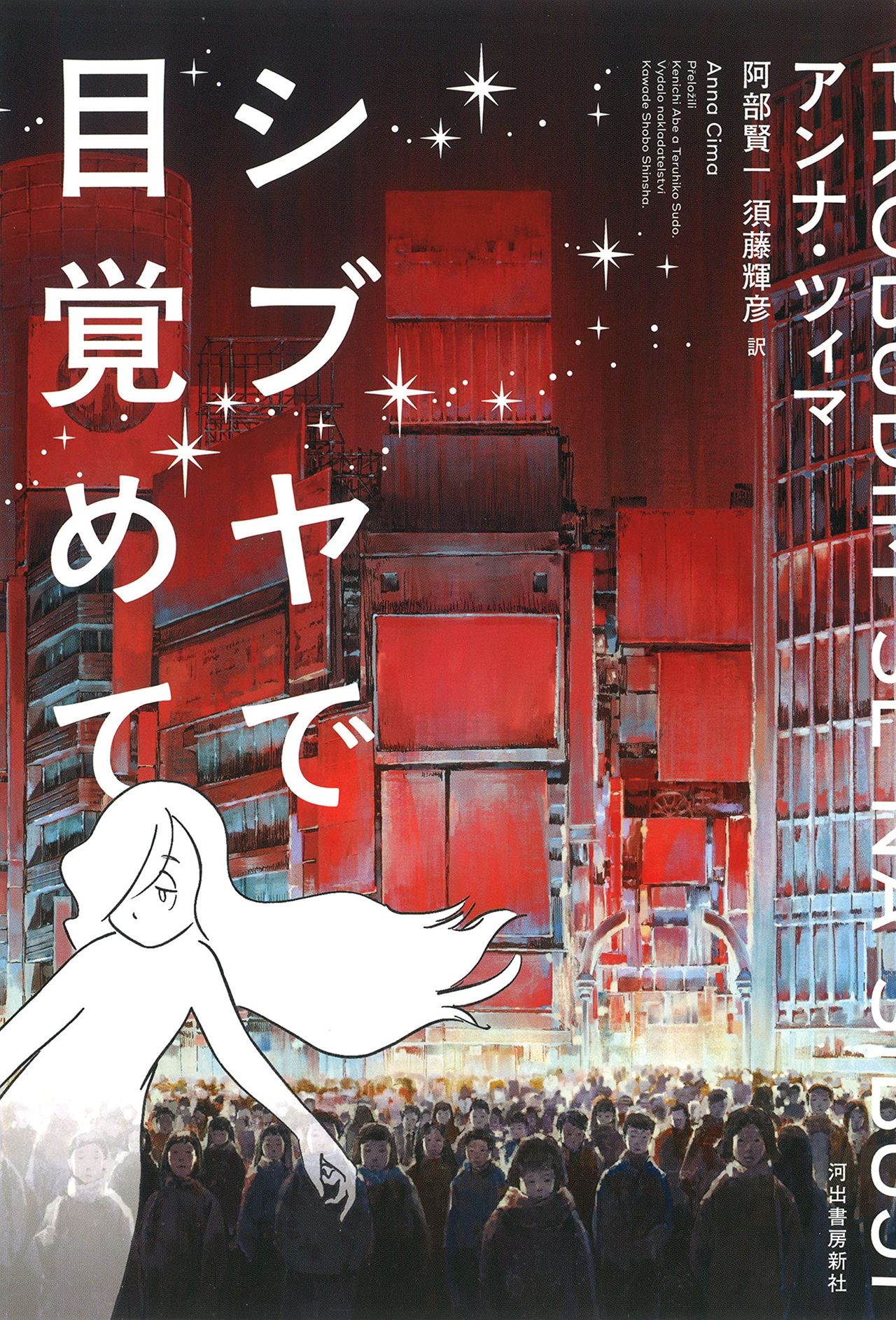 The protagonist is Jana Kupková, a student of Japanese literature at Charles University in Prague in 2017, and another version of herself, who broke away when Jana first visited Japan seven years earlier at the age of 17. This alter ego’s wish, “I want to stay in Japan forever,” is so powerful that she wanders the streets of Shibuya as a kind of ghost, invisible to others and unable to leave. The Prague Jana becomes fascinated by the mysterious author Kawashita Kiyomaru and his handful of prewar works, and begins to investigate further. Meanwhile, the other Jana is also prompted to look into Kawashita’s background, as it might provide the key to her escape from Shibuya.

The invented Kawashita is imagined as having interacted with great Japanese authors like Akutagawa Ryūnosuke, Kawabata Yasunari, Kikuchi Kan, and Yokomitsu Riichi. The novel includes Kawashita’s fiction, as translated by Jana, embedded in the main story. Many other Japanese writers are also referenced—from Mishima Yukio, Matsumoto Seichō, and Shimada Sōji to Takahashi Gen’ichirō and Murakami Haruki.

An Early Encounter with Kurosawa

Despite its complex structure, the overall impression of this book is light and fast-moving. Student life in Prague is vividly portrayed, including the young people drawn to Japanese pop culture like anime and cosplay. The character of Jana, a devotee of Mifune Toshirō, is charming, while her friends show true individuality. Although fictional, Jana markedly reflects Cima’s experiences and love for Japan.

Cima was born and raised in Prague. Influenced by her scriptwriter father, she says that she wanted to be a writer since she was a child. “I was enthralled by Czech children’s books. I particularly enjoyed adventure stories, and wanted to write my own exciting story one day.” 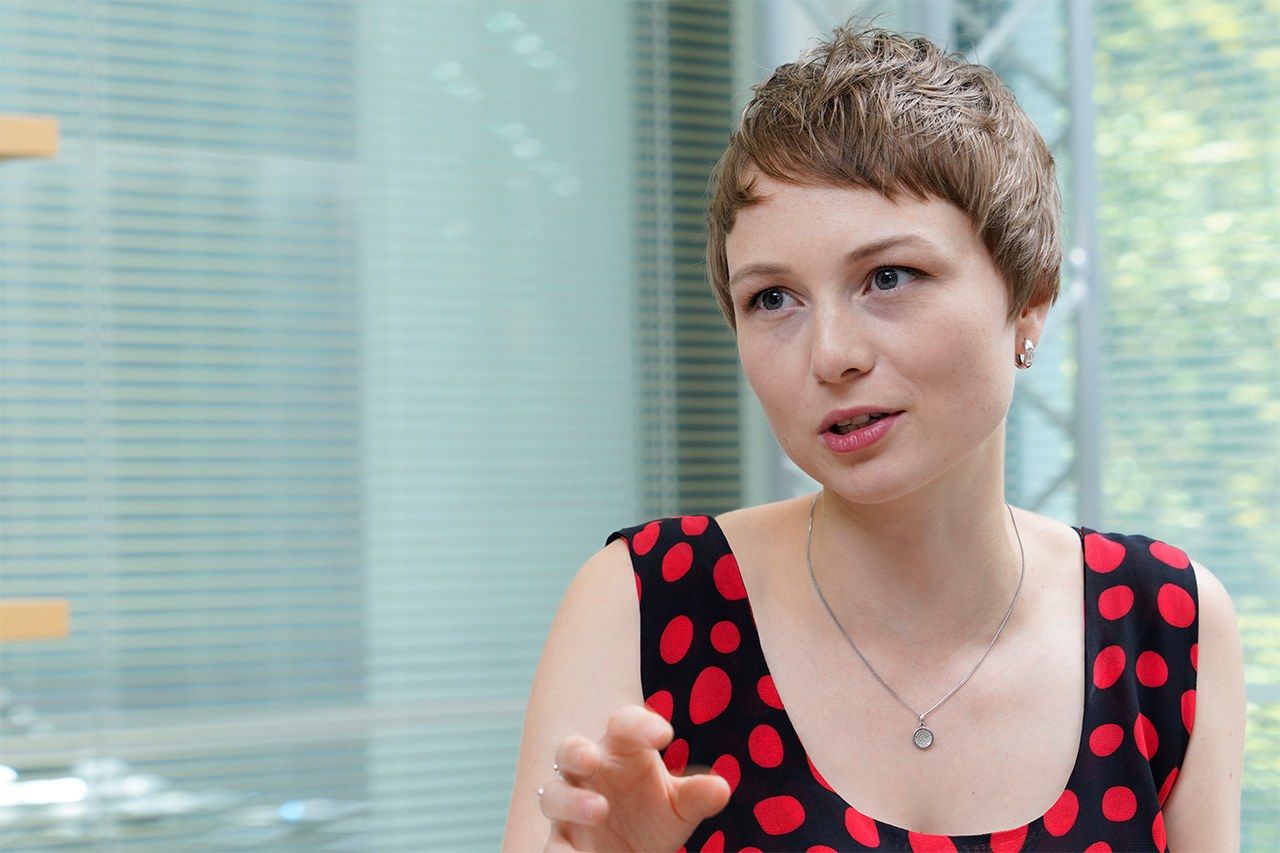 She first became interested in Japan through watching Kurosawa Akira films. “I liked Pokémon when I was four or five, but I didn’t register that it was a Japanese show. At the age of ten or so, I watched a DVD of Kurosawa films my father bought, and learned that there was a country called Japan. The first one I watched was Seven Samurai, and I was amazed at this extraordinary world I’d never seen before. My favorite was Drunken Angel.”

“When I was a child, more people were using the Internet, and at twelve or thirteen, I was crazy about watching Japanese anime like Naruto and Inuyasha on YouTube. They were subtitled in English, so as I was looking up words while frantically reading them, it was good for my English study. I didn’t understand the Japanese at all, but I was intrigued by the sound of it, and I started wanting to learn the language.”

The Japan of Kurosawa’s films is totally different from that depicted in anime. “There are many different Japans,” Cima recalls thinking, “and they’re all wonderful!” She read an Akutagawa short story collection recommended by her father, and started making her way through Japanese literature translated into Czech. The first book she bought with her own pocket money was Murakami Haruki’s Afutā dāku (trans. After Dark), enchanted by the photograph of the Tokyo night sky that appeared on the cover of the 2007 Czech language edition.

“I Want to Come Back to Japan”

In the summer of 2009, Cima made her first trip to Japan, traveling with a friend from the same language school she had attended to learn Japanese and staying in Tokyo for a month.

“We spent every day in the streets of Shibuya. It was fascinating how different it was from Prague.” They were in the city from June to July, and they spent whole days sitting on benches, people watching, and sometimes striking up conversations. “Everything was fresh, and I really thought, ‘I want to come back to Japan again. I don’t want to go home.’”

With this feeling in mind, she entered the Japanese Studies department at Prague’s historic Charles University, overcoming fierce competition to get into a program that accepted only around 20 students from among 250 applicants. For her master’s degree, she specialized in Japanese literature. Her thesis on detective fiction compared Matsumoto Seichō of the shakaiha (social realist school) and Shimada Sōji of the shinhonkakuha (new orthodox school).

“I started writing the novel around the first year of my master’s course. At first, I thought of making it in the form of a diary, based on memorable episodes during my time at university.” After some trial and error, while university life remained a part of the story, she decided the book would be built around an imaginary author.

“I specialized in postwar fiction, but I thought that in the interest of introducing an older Japan, I’d choose writers from an earlier period whose works had been translated into Czech. At the time, there were more materials from the modern period in the university library. And as I was writing a story centered on a fictional author, I decided to include some of his works.” 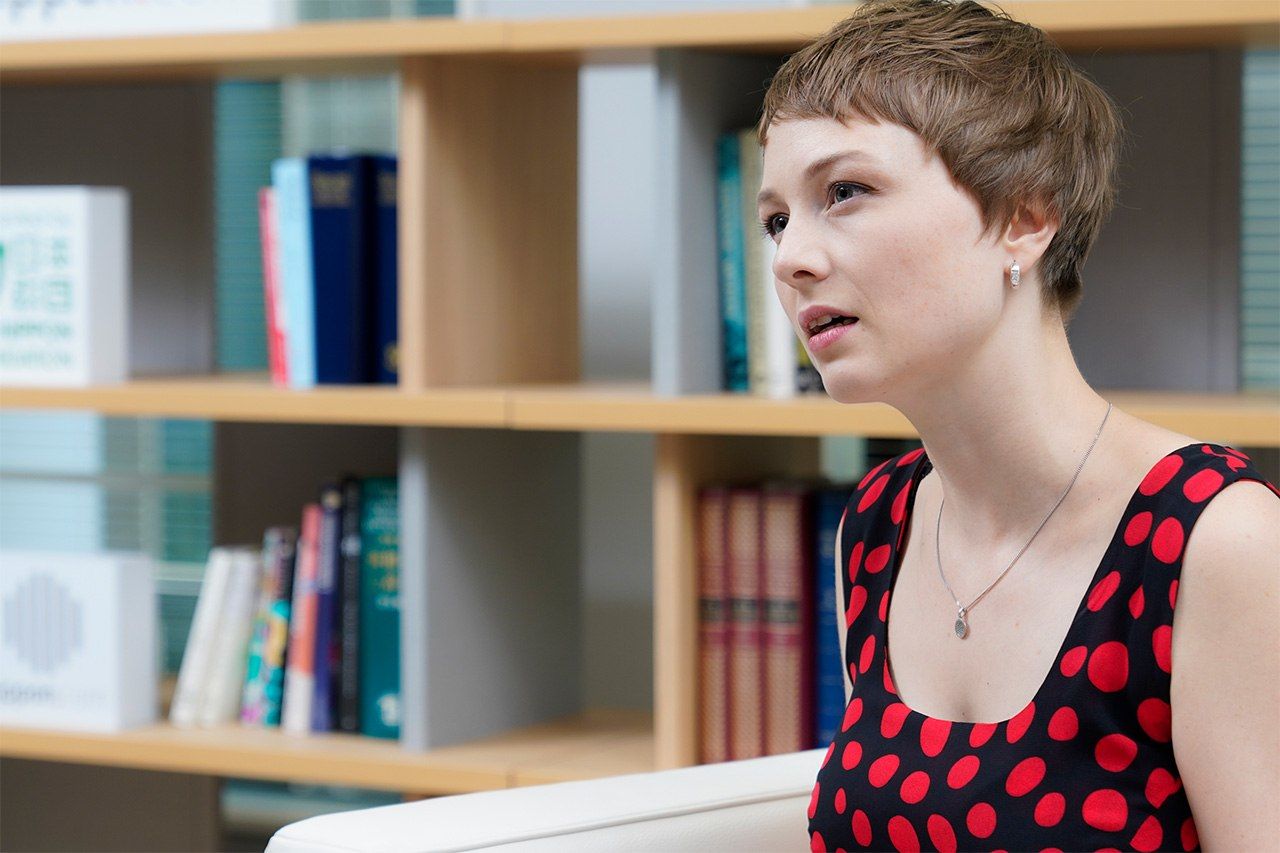 In the Japanese version (Shibuya de mezamete, translated by Abe Ken’ichi and Sudō Teruhiko), there is a clear contrast between the youthful voice of Jana today and Kawashita’s 1920s prose.

“I didn’t really think about translation when I was writing. Although, I did vaguely wonder how Kawashita’s works might be translated into Japanese. I think that in Japan there’s a huge difference between writing from before the war and today. I was really impressed by the skill of the two translators. In my case, I tried to contrast with Jana’s youthful language by making Kawashita’s sentences as elegant as possible, taking pointers from Czech translations of writers like Kawabata Yasunari.”

Cima completed her novel four years ago, which was after she moved to Japan to do research for her doctorate.

“I made it so that Kawashita was born in Kawagoe, because I love that city. I lived in Saitama Prefecture for a while after coming to Japan and I visited Kawagoe several times. I think that when Czechs think of old Japan, they imagine the temples and shrines of Kyoto and Nara. I wanted to introduce a city of merchants for a different image of the country.” 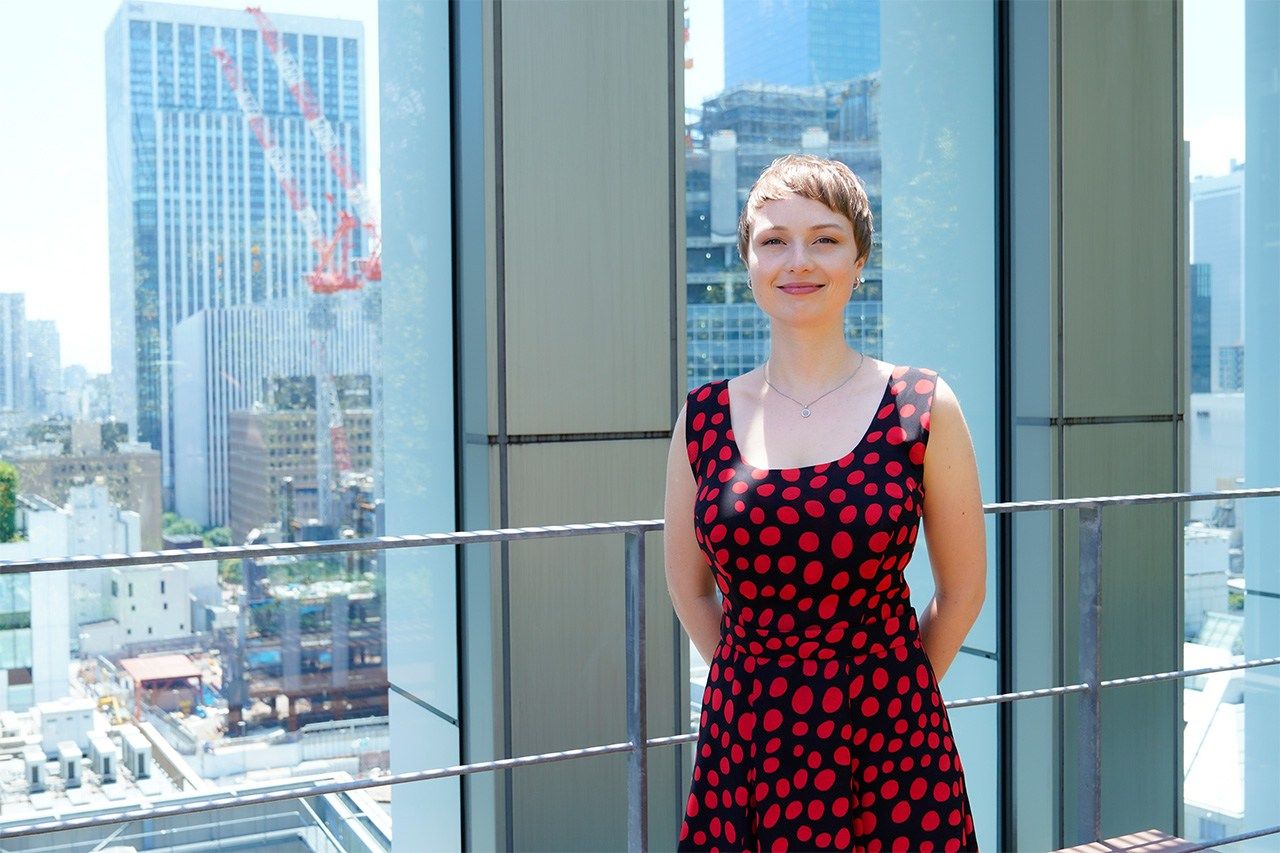 With a playful spirit, Cima put everything she loved about Japan into the novel. “I enjoyed myself as I freely incorporated all sorts of homages to Japanese literature. It’s quite scary when I think about it now. I even wonder if I overdid it. When I was twenty-four, I didn’t hold back at all in my writing.”

It is perhaps strange that a novel with so many references to Japanese literature became such a hit among young Czechs. “I guess in the Czech Republic, historical stories and works about family relationships are popular. I didn’t expect anything at all, imagining it might only be picked up by readers with an interest in Japan. But a lot more people read it than I thought would. On social media, there were comments like one from someone who had read Murakami Haruki, and wanted to try other Japanese writers.”

She says that many readers believed that Kawashita Kiyomaru was a real person. “There were those who said they wanted to read more by Kawashita and asked where they could find other works, and some were disappointed when they found he was made up. In an interview, I was even asked if I was writing the dissertation for my doctorate about Kawashita.”

There must also be Japanese readers who find themselves conducting an Internet search for Kawashita Kiyomaru, given how skillfully fact and fiction are intertwined in the novel.

Movements in Tokyo and Prague

Now Cima lives in Suginami, Tokyo, researching, translating, and writing for her dissertation. “I’m interested in the student movements of the 1960s, and I’m researching how they’re depicted in literature, and how the image of students changed.”

In the 1960s, communist Czechoslovakia had its own mass movement led by citizens and students, seeking democratization during what was known as the Prague Spring, but it was rapidly suppressed. Cima’s grandparents lived through this era, and her father was deeply involved as a student in the bloodless Velvet Revolution, which succeeded in establishing democracy in 1989. Perhaps this is why she feels an affinity for Japanese literary works related to student movements and protests against the US-Japan Security Treaty.

She is also working on translation. “Everyone knows Murakami Haruki in the Czech Republic. I want to help them get to know other authors better. I really like Ōe Kenzaburō, but not many of his books have been translated into Czech. There’s a translation of Mishima Yukio’s Kinkakuji [translated into English as The Temple of the Golden Pavilion], but his Kamen no kokuhaku [trans. Confessions of a Mask] only came out in Czech about two years ago.”

Since settling in Japan, she has translated Shimada Sōji’s Senseijutsu satsujin jiken (trans. The Tokyo Zodiac Murders) and Takahashi Gen’ichirō’s Sayonara gyangutachi (trans. Sayonara, Gangsters) together with her husband Igor. They are already on sale in Czech bookshops.

Cima has read a lot of male authors to date, so she’d like to read Japanese women’s books as well in the future. “In the Czech Republic, there’s growing interest in Murata Sayaka and Kawakami Mieko, but when I was there, few works by female writers had been translated. Since coming to Japan, I’ve read Kurahashi Yumiko for my research, and recently I read Imamura Natsuko’s Hoshi no ko [Child of the Stars] and Akasaka Mari’s Tōkyō prizun [Tokyo Prison]. I want to read more female authors.”

After four years living in Japan, has the obsession with the country she felt in her teens turned into disappointment?

“On my first trip to Japan, I was amazed by everything simply as a tourist. After I came to study here, I’ve had a lot of different experiences, both good and bad, and this is where I spend my daily life. Everyday experiences are all very valuable for me. I don’t feel disappointed. You need to have all kinds of experiences to gain a deeper understanding.”

Finally, I asked about her next book. “Actually, I’ve already finished writing it. It’s very different from my debut, but as you might expect, it’s got a Japan connection.” No doubt, more surprises are in store for readers.

* Click here for an excerpt from I Wake Up in Shibuya in English translation. 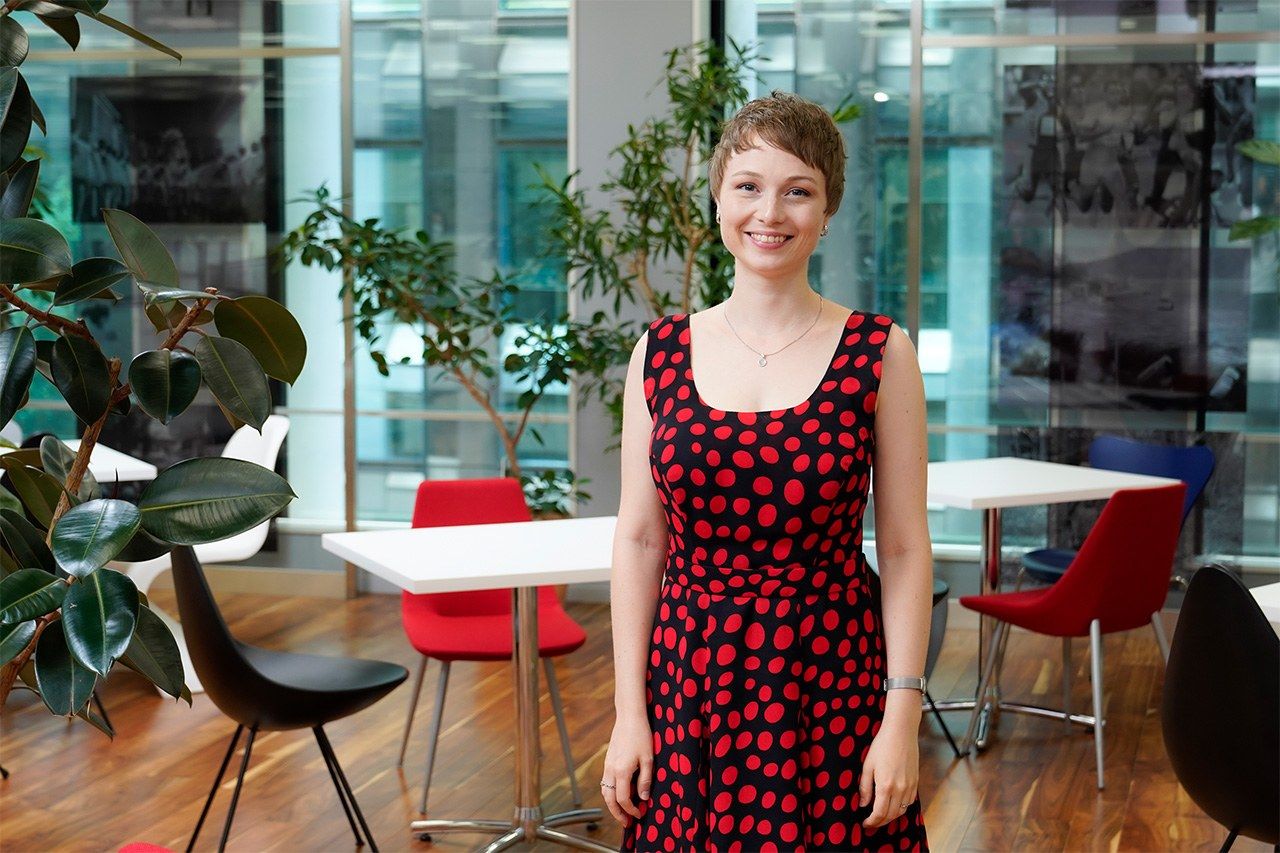 (Originally written in Japanese by Kimie Itakura of Nippon.com. Photographs by Ōkubo Keizō in Tokyo in July 2021.)