Economy Jan 29, 2019
Honda Sōichirō was a dynamic and visionary business leader, defying the odds to turn a fledgling motorcycle and auto manufacturer into a global giant and a motorsport champion.

Honda Sōichirō (1906–1991) was the founder of Honda, now a multinational manufacturer of automobiles, motorcycles, and aircraft. The company was launched in 1948 as a maker of motorcycles and expanded into four-wheel vehicles 15 years later, in 1963. Today, it ranks among the world’s top automakers.

Honda stepped down as president in 1973, when he was 66. That the company continued to register steady growth thereafter in markets worldwide is perhaps his greatest legacy—a testament to the attention the pioneering businessman and engineer gave to ensuring that his successors would enjoy prolonged growth.

Honda was born in 1906 in a small village in Shizuoka Prefecture, where his father was a blacksmith. At 15, he left his hometown for Tokyo to work as an apprentice at an auto repair shop, dreaming all the while of one day becoming an auto manufacturer. At 22, he returned to Shizuoka to start his own garage and, building on this success, launched another company to manufacture piston rings for car engines—moving one step closer to realizing his dream of producing automobiles.

The parts business expanded rapidly, but this success was punctured by Japan’s defeat in World War II. Despite the social upheaval of the immediate postwar years, Honda, in 1948, took another bold step toward realizing his goal and launched his third company—this time to manufacture not components but complete motorcycles. He was 42.

Thanks to Honda’s engineering prowess, the motorcycle business flourished, setting the stage for his entry—at age 57—into the four-wheel-vehicle market. At the same time, he announced that Honda Motor would take part in Formula One racing, an audacious move when the company’s lineup of cars consisted only of mini trucks. He was confident of his technology, however, as Honda Motor had been dominating the motorcycle circuit. Honda Motor joined F1 racing in 1964, and won the Mexico Grand Prix the following year.

As a leader, Honda relentlessly pursued his dreams, but he also communicated actively with his workers. On the one hand, he was a man of vision, constantly looking for ways to achieve his dreams. Where others saw obstacles and constraints, he saw possibilities. He was unsparing and uncompromising in his work, convinced that where there is a will, there is a way. His passion and drive for success prompted him to take on one daunting challenge after another, from auto repair and the production of piston rings, motorcycles, and automobiles to participation at the highest levels of competitive motor racing. 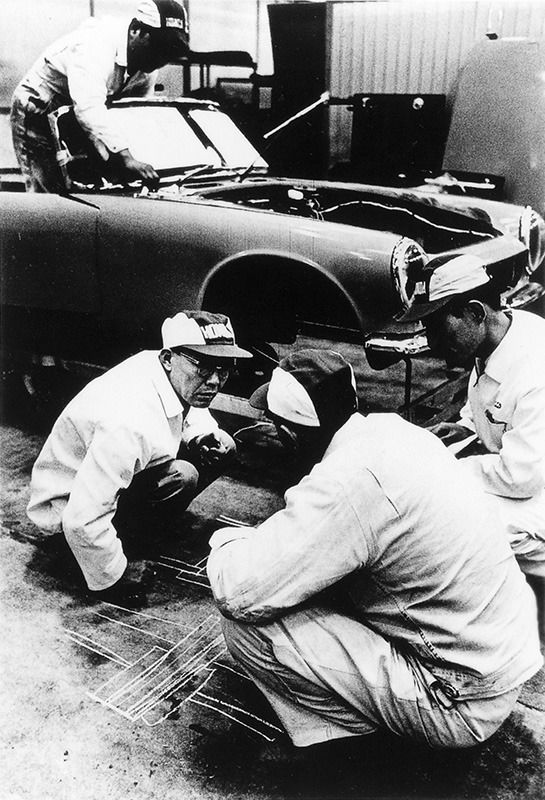 In a 1962 photo taken at the Wakō R&D center, Honda, left, writes diagrams on the floor to explain his ideas to engineers during the development of the S-series sports car.

At the same time, he was ever mindful of those working under him. This is probably why his colleagues and employees were unwaveringly loyal, despite his stringent demands. Honda was always taking on new challenges, and his passion for engineering preeminence could sometimes make him merciless. His pioneering spirit was infectious, though, and he was loved and respected by all.

In 1954, he issued a declaration to his workers, stating that the company would enter the prestigious Isle of Man Tourist Trophy motorcycle race with the intention of winning. The company was facing a bankruptcy crisis at the time, but it was precisely because the future appeared uncertain that Honda wished to give employees a big goal. The subsequent decision to enter Formula One racing again came during a difficult period—having just jumped into the auto market the year before in spite of a government decree to limit the number of carmakers. No one believed that a small, upstart manufacturer could succeed on either circuit, but he went on to prove the naysayers wrong, although victory did not come easy. Exhorting his engineers to never be afraid to make a mistake, he guided them through numerous challenges. The technologies developed and skills learned became valuable assets for the company, prompting it to establish yet bigger goals and helping propel the automaker into a global giant.

Competitive motorsports demand high-performance engines, and efforts to maximize performance greatly enhanced the skills of young engineers, who then applied those skills in the development of passenger vehicles. This was the source of the competitive advantage enjoyed by Honda’s compact cars. Race car engines require high fuel efficiency under extreme conditions, so the Honda engineers involved in F1 racing accumulated great knowledge of fuel consumption technologies. This led to the development of the revolutionary high-efficiency, low-polluting CVCC engine in 1972 that propelled Honda’s worldwide growth.

Compassion for the Rank and File

Honda Sōichirō was fond of telling his engineers, “Put yourself in other people’s hearts,” that is, to see the world through the eyes of others. He disliked making development decisions based on market research and instead exhorted engineers to use their imagination to ascertain the features a customer really seeks. “Don’t listen to what customers say they want,” he would note. “Listen to their hearts. Apply your professional expertise to give voice to their inner feelings.”

To his managers, he may have wished to say, “Put yourself in your subordinates’ hearts.” Honda had great compassion for his workers, particularly the rank and file and other support staff.

“Shower your love on your left hand” is another phrase he often used. Honda liked to work with his hands in building and assembling parts. Being right-handed, the bulk of such work, say hammering, was done with his right hand. The left hand, though, is needed to hold pieces in place. The right hand may appear to be doing all the work, but it needs the left hand to do it well. In other words, the managers and other leaders may receive much of the credit for business success, but they should not forget that this is built on the sacrifices of the supporting cast. Indeed, Honda’s left hand had 48 scars, and 5 millimeters were shaved from the tips of two fingers—the result of workplace accidents. He was thus very loving toward his left hand. 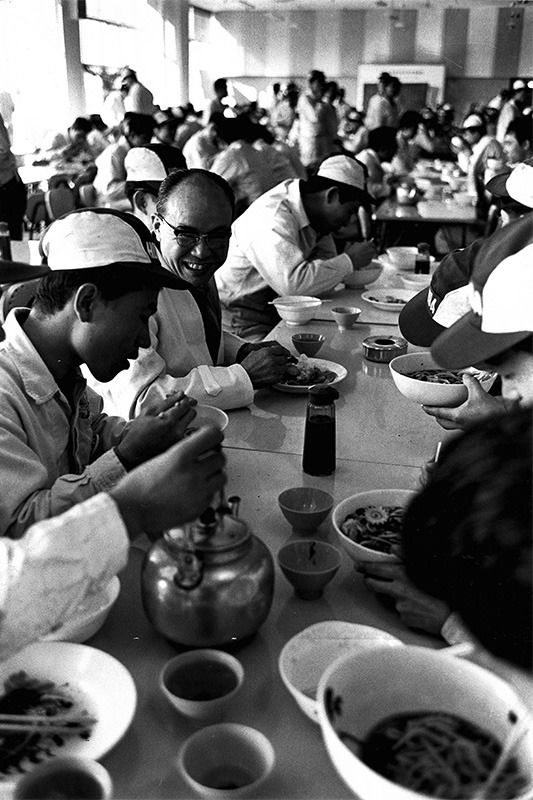 Sharing a meal with workers at the company cafeteria circa 1960.

Honda Sōichirō was a tinkerer whose engineering genius fueled his company’s global growth, but credit should also go to co-founder Fujisawa Takeo. The company was twice on the verge of bankruptcy, and it was Fujisawa who defused both crises. Fujisawa was an extremely capable, career-long partner who wished nothing more than to give full play to Sōichirō’s genius and thereby sustain Honda Motor’s rapid expansion.

In his later years, Sōichirō was unable to keep up with the pace of technological innovation, and his autocratic style was beginning to chafe some of the younger workers. Seeing this Fujisawa announced quite abruptly in 1973 that he was stepping down. The meaning of this announcement was not lost on Sōichirō, who promptly decided to join Fujisawa in resigning. His successor as president was 45-year-old Kawashima Kiyoshi—the first college graduate that the company had hired. The sudden generational shift in leadership was another legacy of Sōichirō and a tradition that the company continues to uphold today. 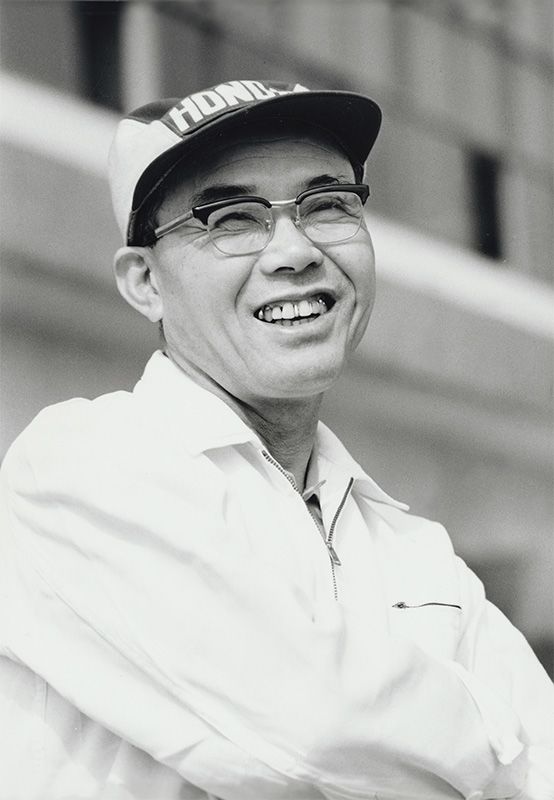 Honda Sōichirō in work clothes at the Wakō center circa 1960.

(Originally published in Japanese on January 19, 2019. Banner photo: Honda Sōichirō poses in Honda’s Aoyama showroom with the McClaren-Honda MP4/4 that dominated the 1988 Formula One season, winning 15 of 16 races that year. Photos courtesy of Honda Motor Co.)