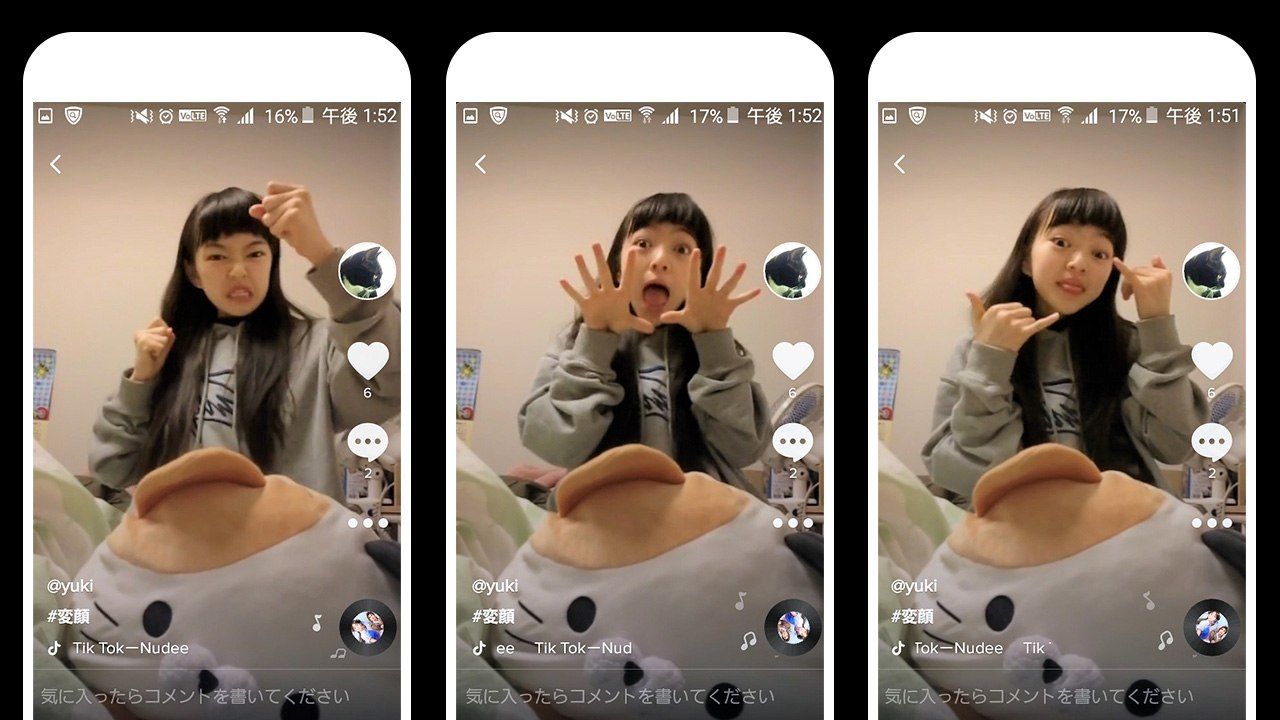 TikTok, a new Chinese-developed app for making and sharing short videos, has quickly become a hit in Japan. Originally known as Douyin in China, it has Japanese fans of all ages, but is especially popular with adolescent girls who compete for followers and likes by posting entertaining content like cute dance routines and creative makeovers.

The app’s rapid rise to fame has taken many by surprise, particularly in the face of social media giants like YouTube, Instagram, and Twitter. Ease of use is one factor working in TikTok’s favor. Anyone can upload a video enhanced with filters and other editing effects. Users of the platform are not under the same pressure to stand out from the crowd as on Instagram or to put together as much footage as on YouTube. Instead, TikTok is a treasure trove of short videos featuring catchy sped-up songs and jokey actions that invite imitation. And at just 15 seconds each, the videos appeal to the limited attention span of adolescent viewers.

Young Japanese users have been especially drawn by the app’s filters, which enable them to easily alter their facial features. For instance, some Japanese girls go to great lengths applying special adhesive tape just for the appearance of having double eyelids, a quality many young adults desire. But with TikTok’s filters users can effortlessly give themselves cosmetic makeovers to gain the same big eyes and sharp chin of a leading actress or other celebrity.

A popular category of video is dances that focus just the hands and upper half of the body. The simple moves are easy to remember, giving viewers a fun sense of achievement when they master a routine. A growing trend among close friends is to perform dances dressed in matching outfits and then posting the results on the app.

The Schoolgirl with 2.5 Million Followers

Sixth-grader Hinata from Aichi Prefecture is Japan’s most popular TikTok star with more than 2.5 million followers. Her cute, comic antics—one moment she is lip-synching about heartbreak in fashionable Korean makeup and the next she pulls a funny face to break the tension—have won the admiration of a growing legion of elementary school girls, while several television appearances have further raised her profile.

TikTok was released in Japan in October 2017. It was not an immediate hit, but steadily won new users mainly by word of mouth. This came as a surprise to its developers, who did not anticipate the app’s rising popularity among young Japanese women without the backing of celebrities or influencers. After the media started covering TikTok’s popularity with girls, interest grew among users in the entertainment world. From early 2018, television commercials for the app featuring comedians and other stars brought a boom in name recognition and users.

TikTok is well on its way to becoming a household name in Japan, even to the point that many in the country may not even know the app is operated by a Chinese company. Nonetheless, it is helping build bridges between the two countries by inspiring musical sharing and cultural exchange.

(Originally published in Japanese on February 7, 2019. Banner photo: Grade schoolers are among the stars on TikTok. Image courtesy Onda Yuki.)