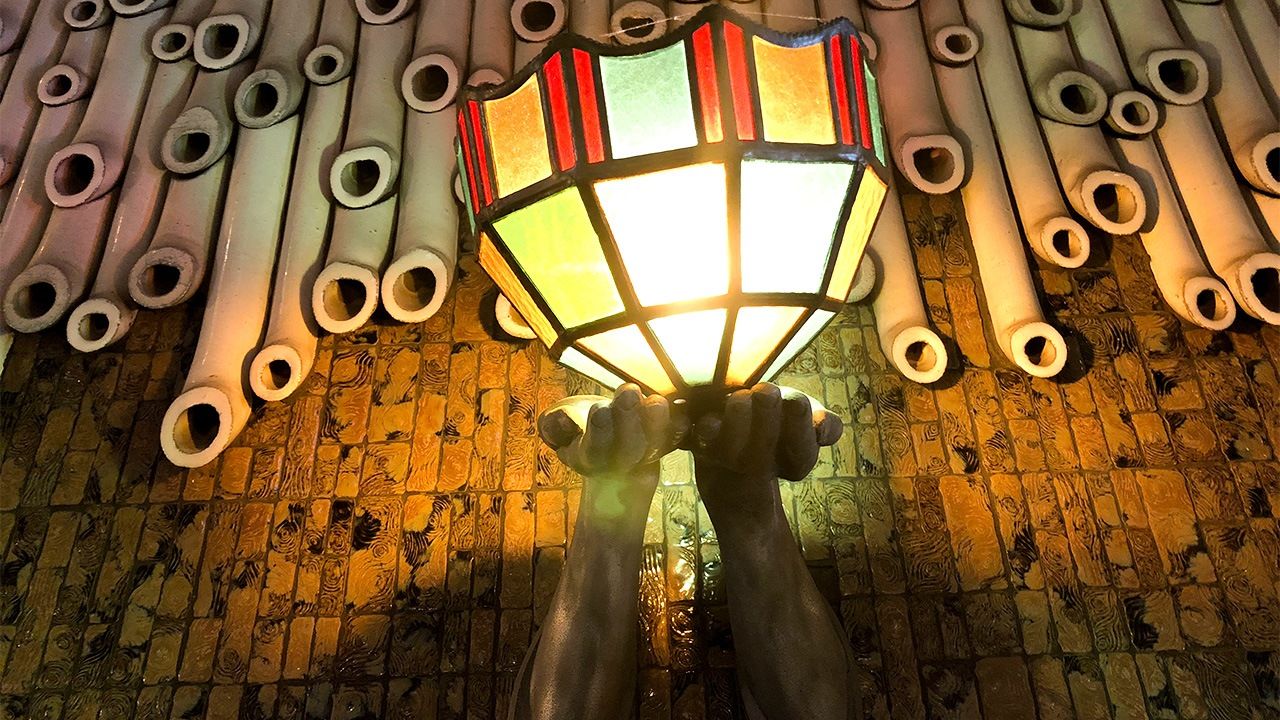 Buildings from Another World

Japanese architect Von Jour Caux has earned the moniker the “Gaudí of Japan” with his unique, eye-catching creations. His buildings, lavishly decorated with huge sculptures of goddesses and a vast array of exuberant details, stand out from their surroundings, impacting viewers with their mysterious energy and disorienting air of exoticism. They may appear at first glance like something from a theme park or a garishly designed love hotel, but the buildings express the distinct fantasy world of one of Japan’s most vibrant architects. 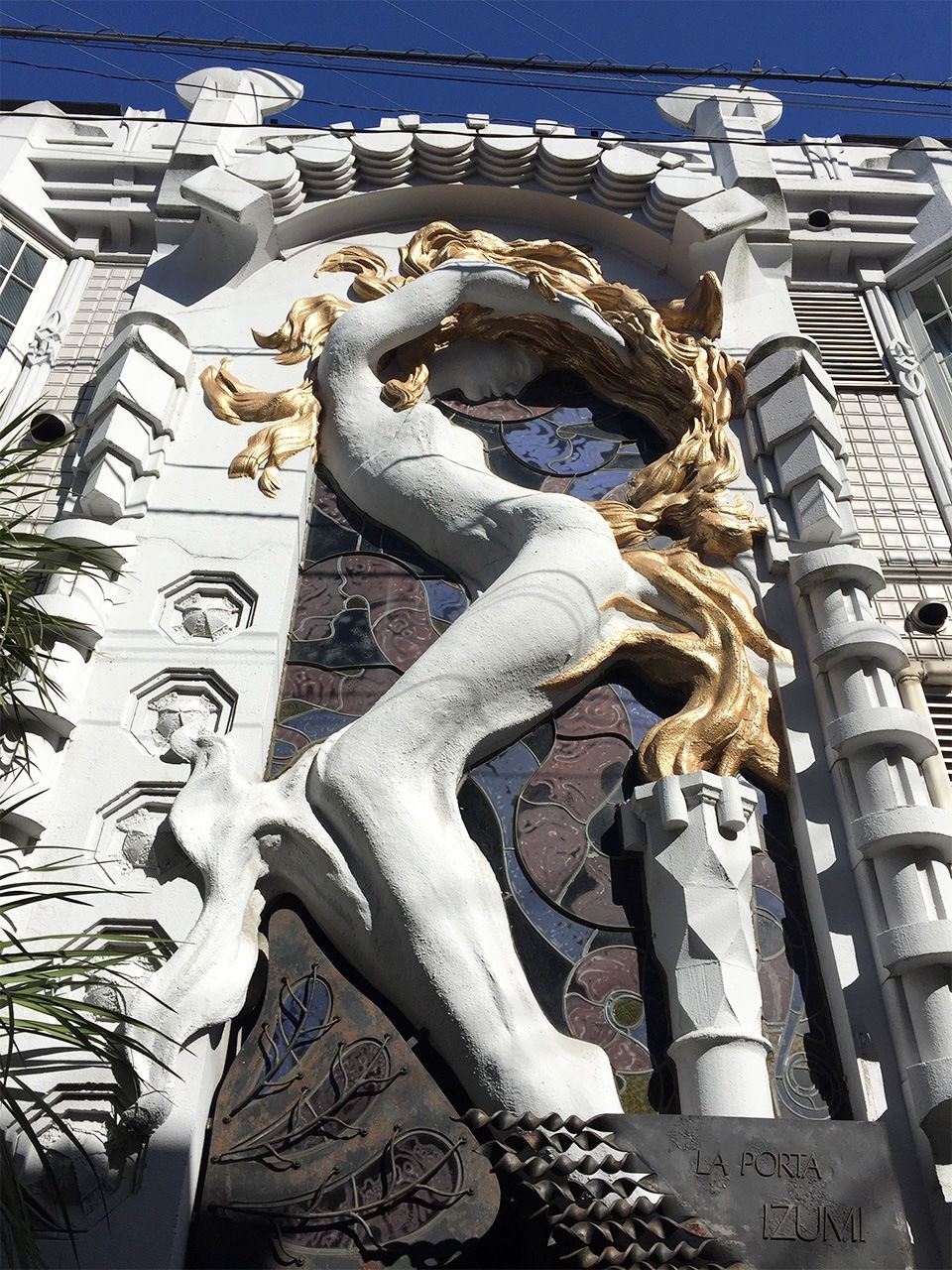 The façade of La Porta Izumi apartment building in Tokyo.

A stone’s throw from Waseda University in Shinjuku stands the Waseda El Dorado condominium, a structure whose appearance is reminiscent of housing projects Gaudí designed in Barcelona. In 1992, the Japan Times carried an article with the headline “Gaudi’s Ikebana of Cement and Steel Sets Root in Japan,” and the “Gaudí of Japan” tag has stuck ever since.

But the more I learn about Von, the more I am aware of the differences between the two architects. Every few months I conduct tours of some of Von’s most significant buildings in an attempt to dispel some of the preconceptions and misunderstandings that surround his work. I want people to understand that he is not some freak who creates bizarre buildings to shock and attract attention but is a remarkable artist who draws on an inexhaustible wellspring of other-worldly ideas. 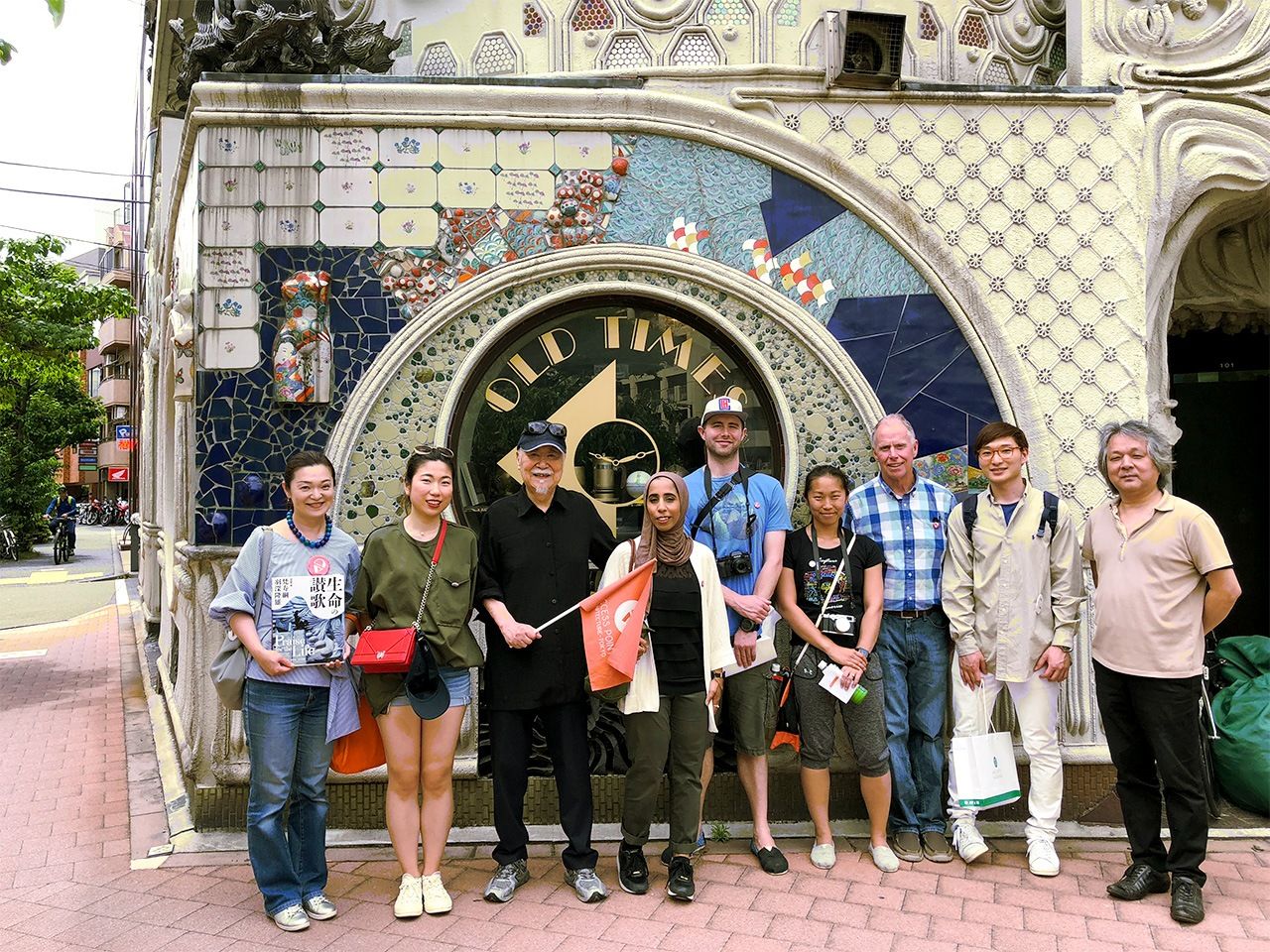 Von Joux Cour (third from left) in front of Waseda El Dorado during an architectural tour of Tokyo organized by Access Point.

Born Tanaka Toshirō in 1934, the architect took to calling himself Bon Jukō (romanized as Von Jour Caux) in 1974. The name, combining concepts from the ancient Sanskrit texts the Upanishads and the posthumous name of his adoptive father, is itself a manifestation of the self-expressive style of the artist.

Von graduated from the architecture department at Waseda University in 1956. Inspired by the works and ideas of German-American architect Ludwig Mies van der Rohe, he traveled to Chicago in 1962 with the intent of enrolling at the Illinois Institute of Technology. Once in the Windy City, though, he instead studied painting, sculpture, and arts and crafts at the School of Art Institute. It was there that he met his wife and life-long artistic collaborator, and together with other artist friends the couple started the art complex movement. The group’s first collaborative project was the Waseda El Dorado, a building designed on the utopian concept of a “city of gold” in the heart of Tokyo that makes a new style of beautiful living possible. Von and his wife collaborated in creating the extravagant wedding cake-like decorations on the structure’s façade that continue to inspire and delight passersby.

Inside the building, things are even more mysterious. At the end of a narrow corridor is a space dominated by a huge hand extending down from the ceiling. Von has been fascinated by the theater since childhood and he describes how incorporating fantastic elements makes it possible for people to experience a sense of drama by stirring up deep memories and provoking reveries and imaginative narratives in the mind. The intrusion of unexpected objects into corridors and other humdrum spaces duplicates life’s rites of passage and provokes musings as to whether an unseen hand of an almighty being is guiding the way through the space and on to paradise. 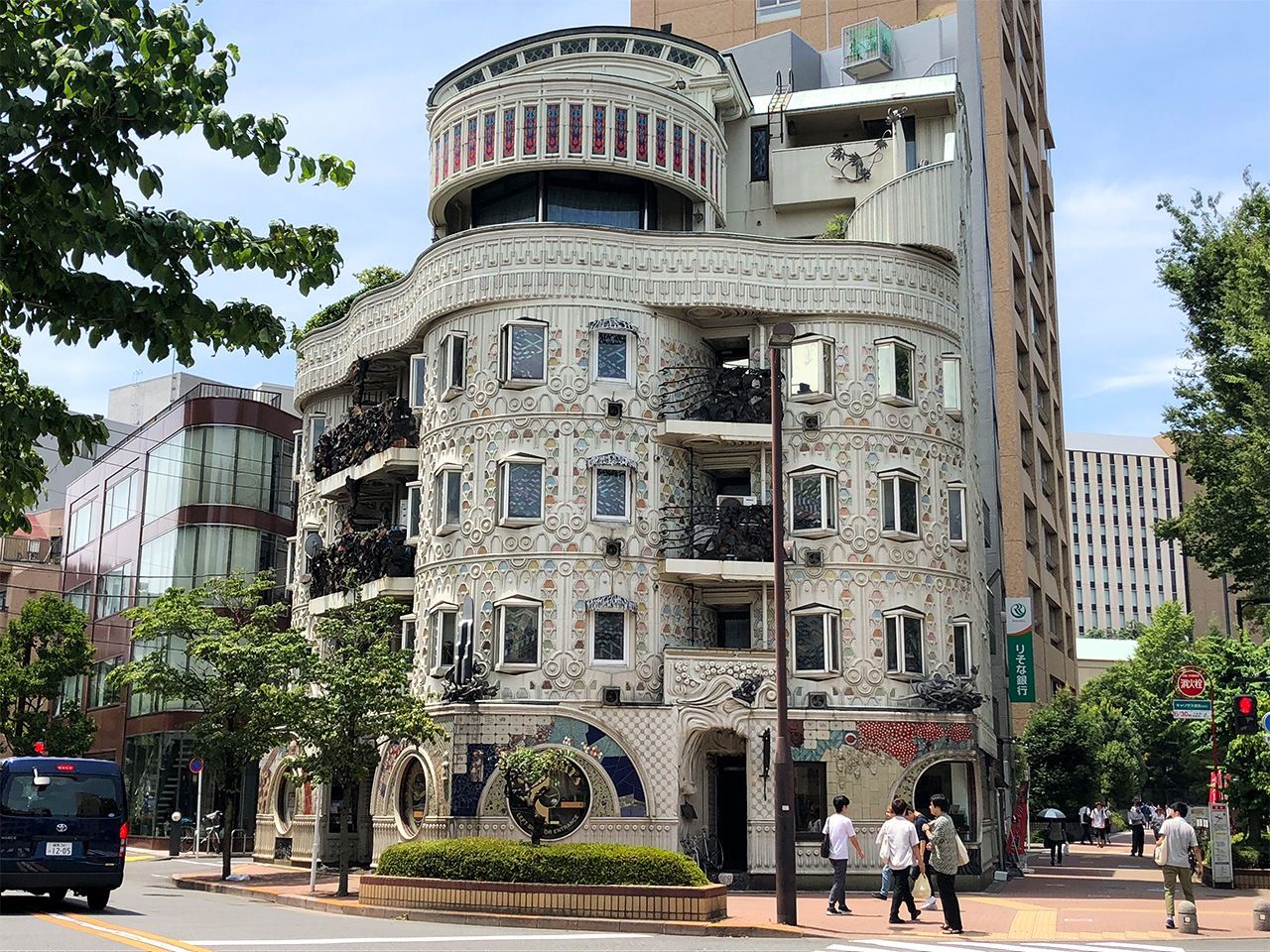 This mystical space was born from a collaboration between Von and a group of young artists whose works resonated with Von’s ideas. He gave the young artists the opportunity to turn their nascent concepts into reality, and they repaid this trust in kind by creating imaginative works. This approach allowed Von to overcome the challenges of a limited budget and time, producing a mutually beneficial relationship. This emphasis on collaboration is one aspect that differentiates Von from Gaudí.

The Spanish architect also worked with talented artists and craftsmen, but he saw them simply as a means to realize his own ideas. From the start, though, Von was different from his predecessor in his respect for his collaborators, giving them free rein and as much space as they needed to express their own ideas. In fact, he refers to Waseda El Dorado as a collaborative work by the art complex movement, made up of Von Jour Caux and his friends and comrades-in-arms. 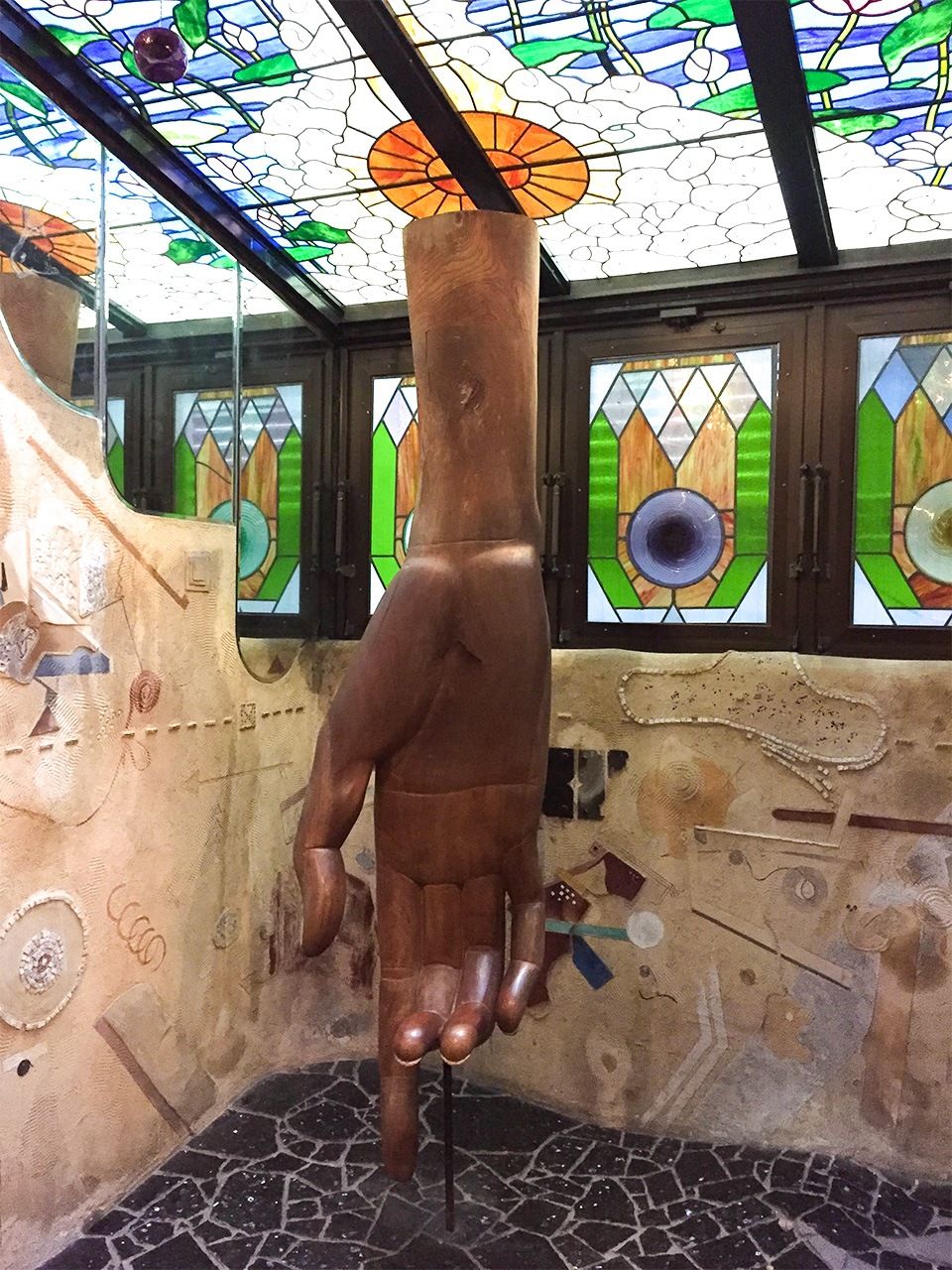 The hand hanging from the ceiling inside Waseda El Dorado is in fact a chair.

Two other apartment buildings Von designed are near Daitabashi Station in Suginami, Tokyo. The first, La Porta Izumi, is named for its symbolic status as a gateway from the busy traffic of the Kōshū Kaidō to the quiet residential streets beyond the bustling highway. The structure’s façade features a huge sculpture of a woman, her body bent and her hair falling in golden cascades. Together with a leaping Pegasus ready to take flight, the statue of the goddess brings new life to the Izumi residential district through what Von describes as “the power of legend to reach deep into the well of memory.”

Although easily mistaken for a love hotel, the structure is actually an apartment building. On the other side of an iron door is a private space for residents, the portal creating a clear borderline between the lascivious dramatics of the public spaces and the quiet privacy of the areas beyond. The apartment spaces themselves are a simple, conventional design without any excess decoration or adornment. 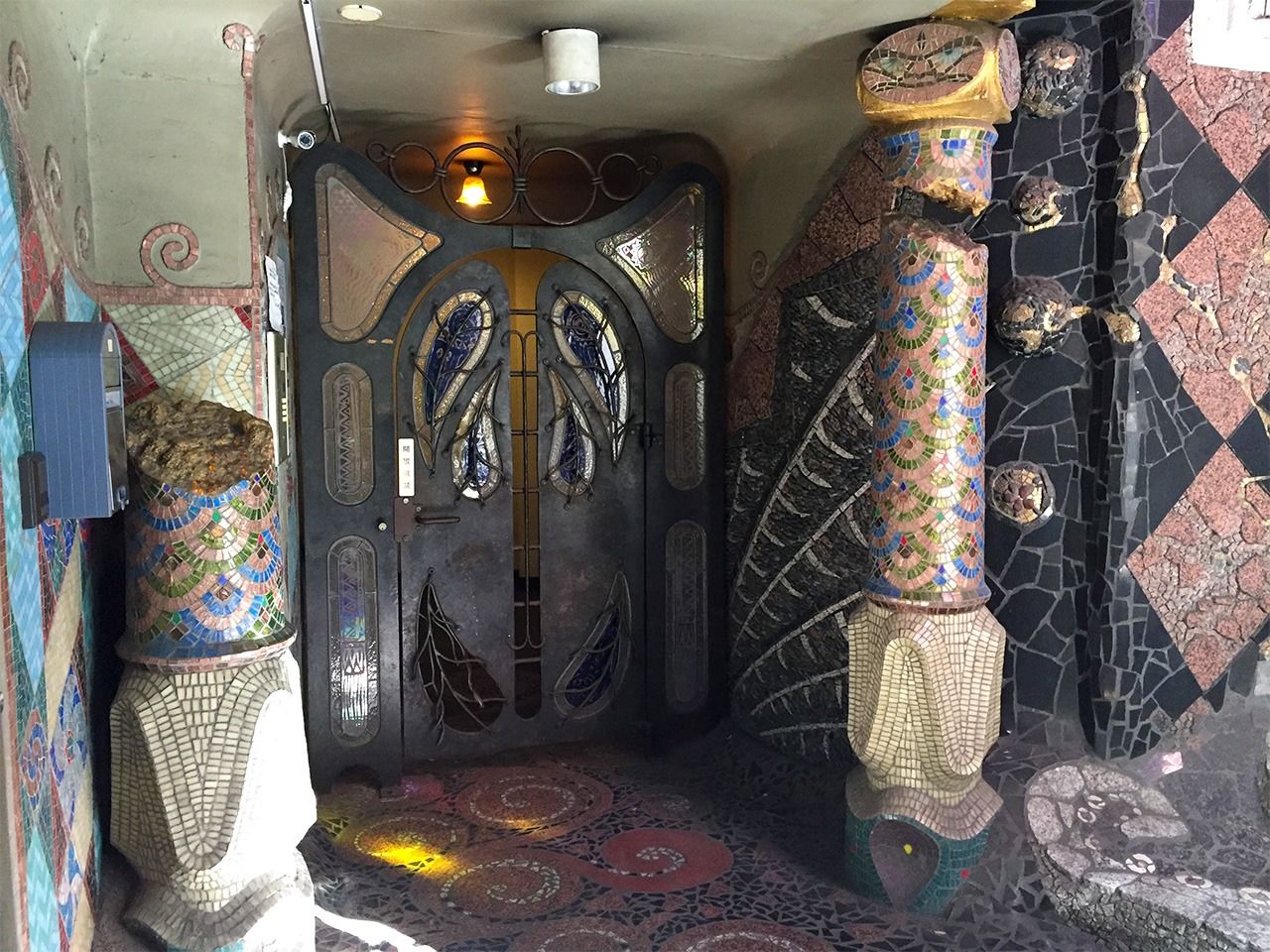 The Mind Waa building is another cooperative effort bringing together the talents and visions of Von and his collaborators. It is easily recognizable by eye-catching orange semi-spheres embedded at regular intervals in the outer fabric of the building, features inspired by the convenience store on the ground floor.

To the right off the entrance hall is a garden patio exclusively for residents. This decision to organize a communal housing project around an inner shared space is reminiscent of Gaudí’s famous Casa Batlló in Barcelona. The owner, an admirer of Gaudí, apparently asked specifically for a space designed around the idea of the sea when he commissioned the building. Von recalls how when working on Mind Waa he would come to work in the morning and find things starting to appear that he could never have imagined. Through their repeated collaborations, the artists deepened their mutual understanding, pushing and inspiring each other to create a space that Von himself knew little about until it became a reality. Their creative approach could be compared to a jazz session where musicians drive one another on to ever greater flights of inspiration and improvisation. 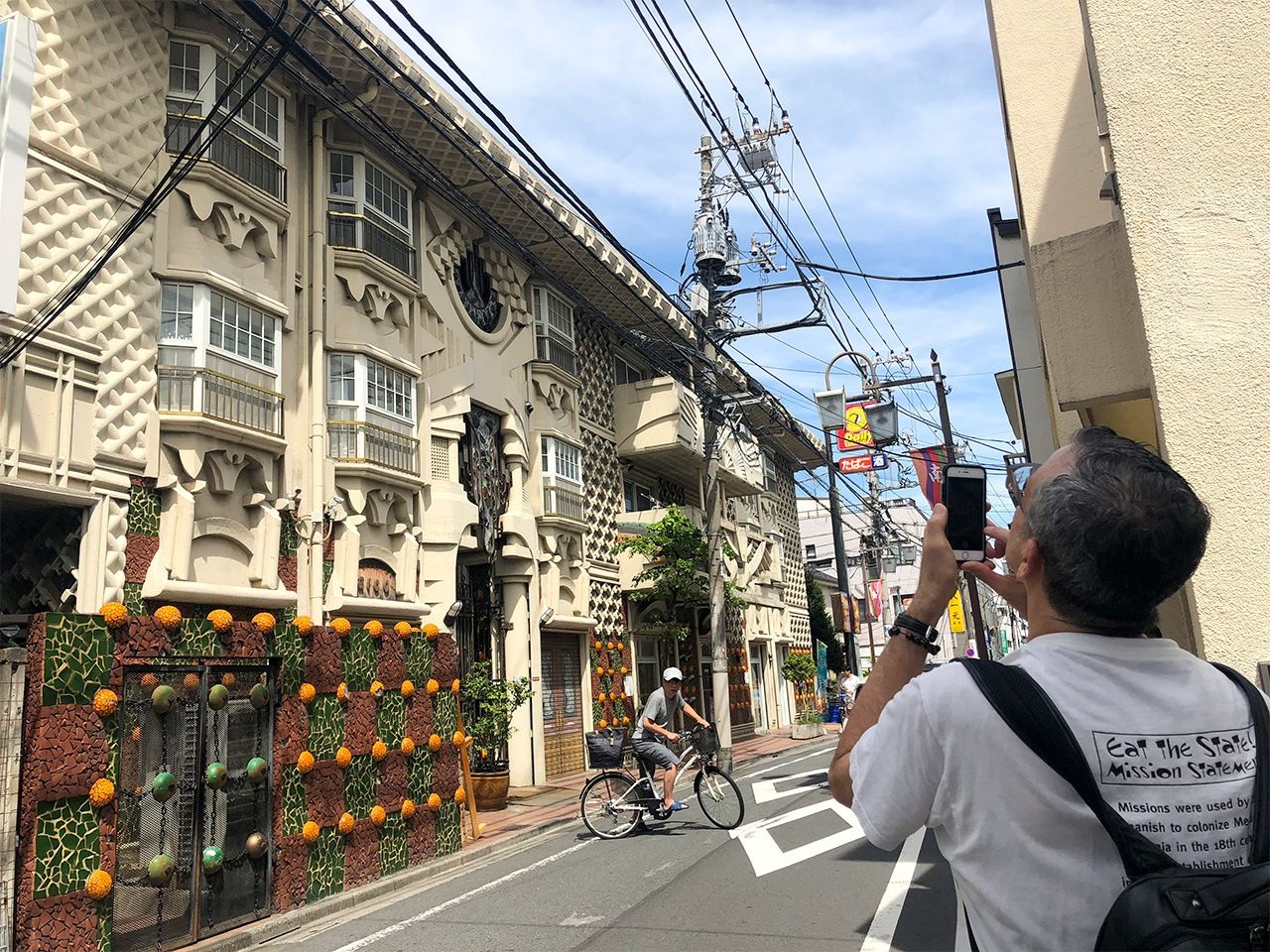 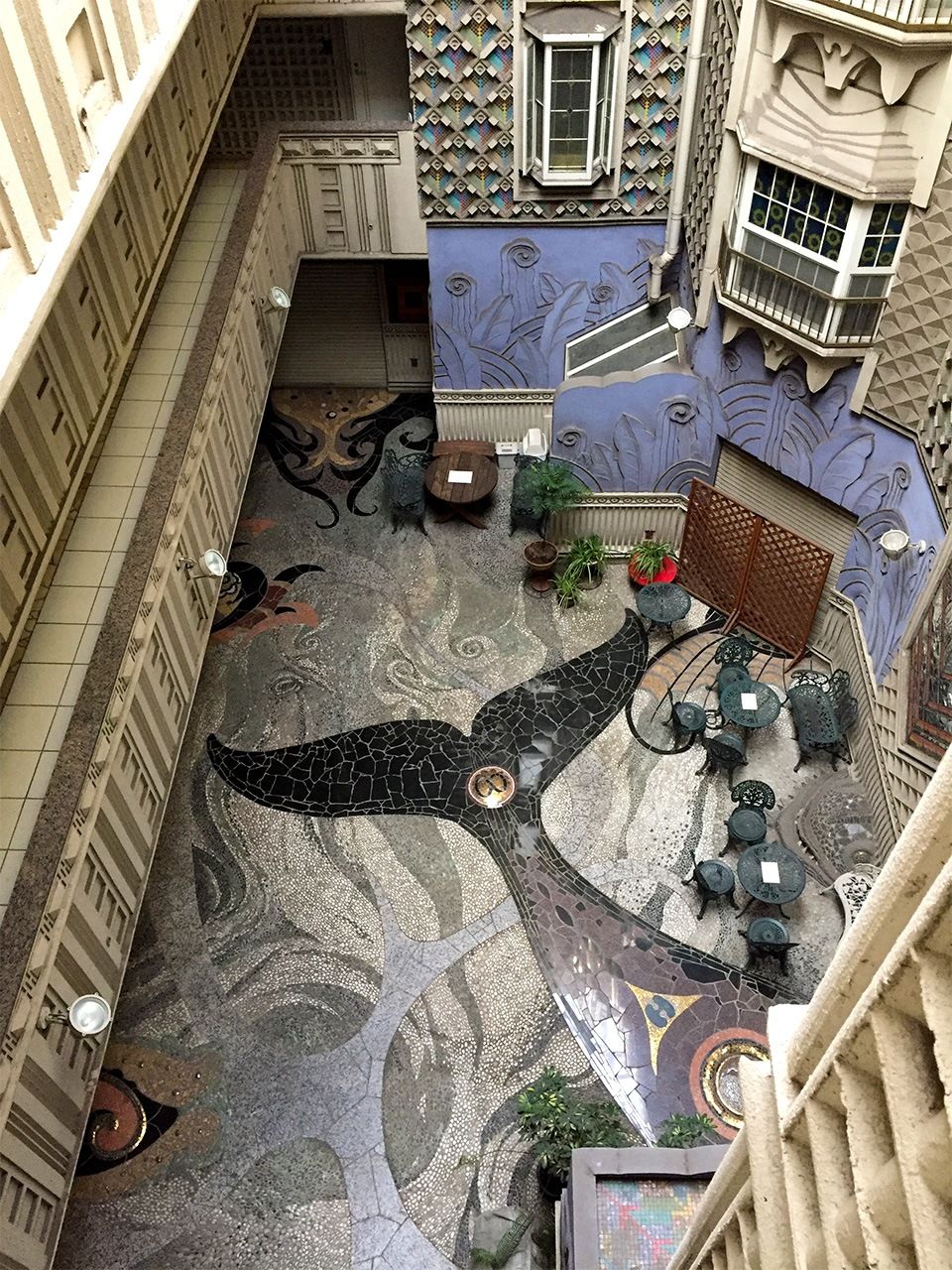 The patio garden inside Mind Waa is designed around motifs of the sea.

A Never-Ending Hymn to Life

A home for the aged is often a resident’s final abode in life. In this, it differs from a hospital, where people normally expect to stay only until they recover, and unavoidably a pall of death lingers. Von and his collaborators poured all their skills and creative energy into designing a space where people could spend their final years in peace and happiness. The space is has an air of tranquility and rest, bringing it close to the hearts of resident as well as the staff who care for them.

The building is designed so that happy memories from the past overlap new input from their surroundings. Stained glass depicting seasonal scenes decorate the corridors and ceilings, providing variety and distinguishing characteristics to a space that is typically bland and repetitive. The idea was to help residents orient themselves in the space by providing visual cues. As Von describes it, rather than simply relying on a random room number, “people can remember that they live in the room just after the stained glass of the carp streamers symbolizing the Children’s Festival in early May.”

Another huge hand, poised as if beckoning the souls of the deceased to heaven, adorns the mortuary. The space is an affirmation of life filled with light and happiness, and it clearly conveys the message that death is nothing to be afraid of.

The structure has attracted unprecedented attention and drawn a continuous stream of prospective residents from around the country. I too want to live here when I get old. In Von’s visions, dream and reality, life and death are two sides of the same coin. His building is an ambivalent space in which these two facets mingle. For me, this home for the aged is the supreme masterpiece of the art complex movement. Only by experiencing this space can a person truly understand the hymn to life characteristic of so much of Von Jour Caux’s work. 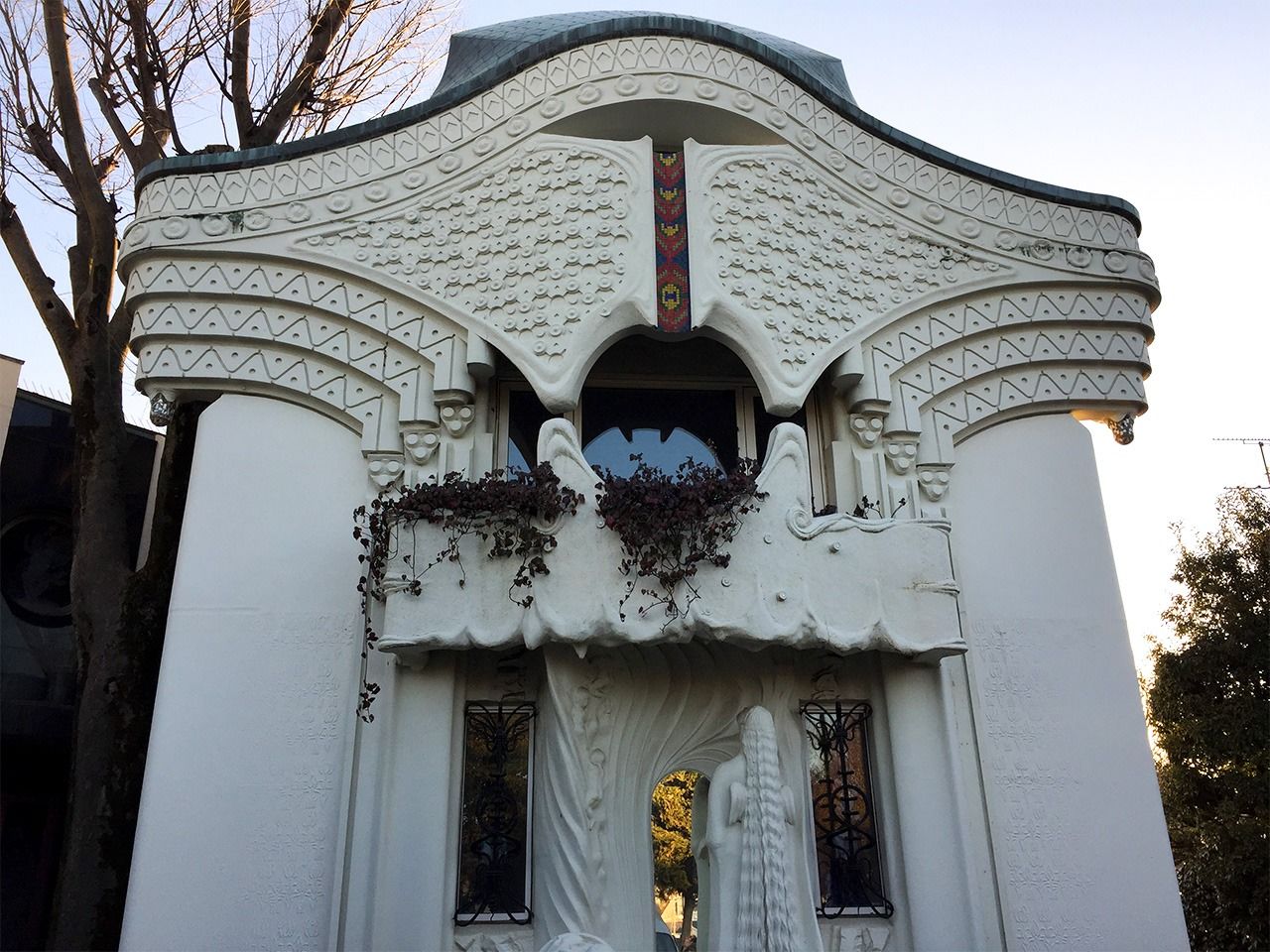 The bathing facilities at Mukōdai Home for the Aged is guarded by an angel with flowing locks. 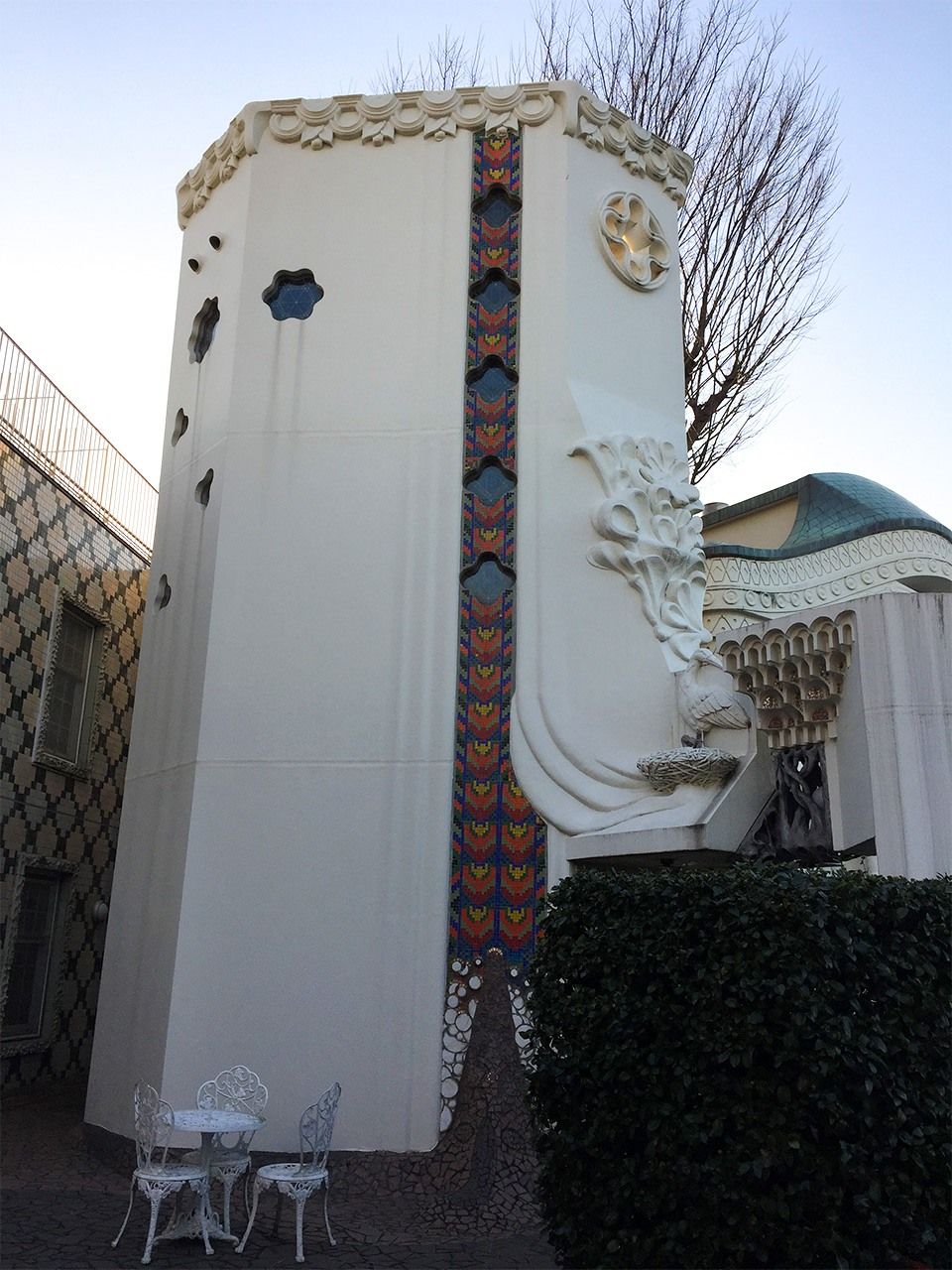 The mortuary features a stork’s nest 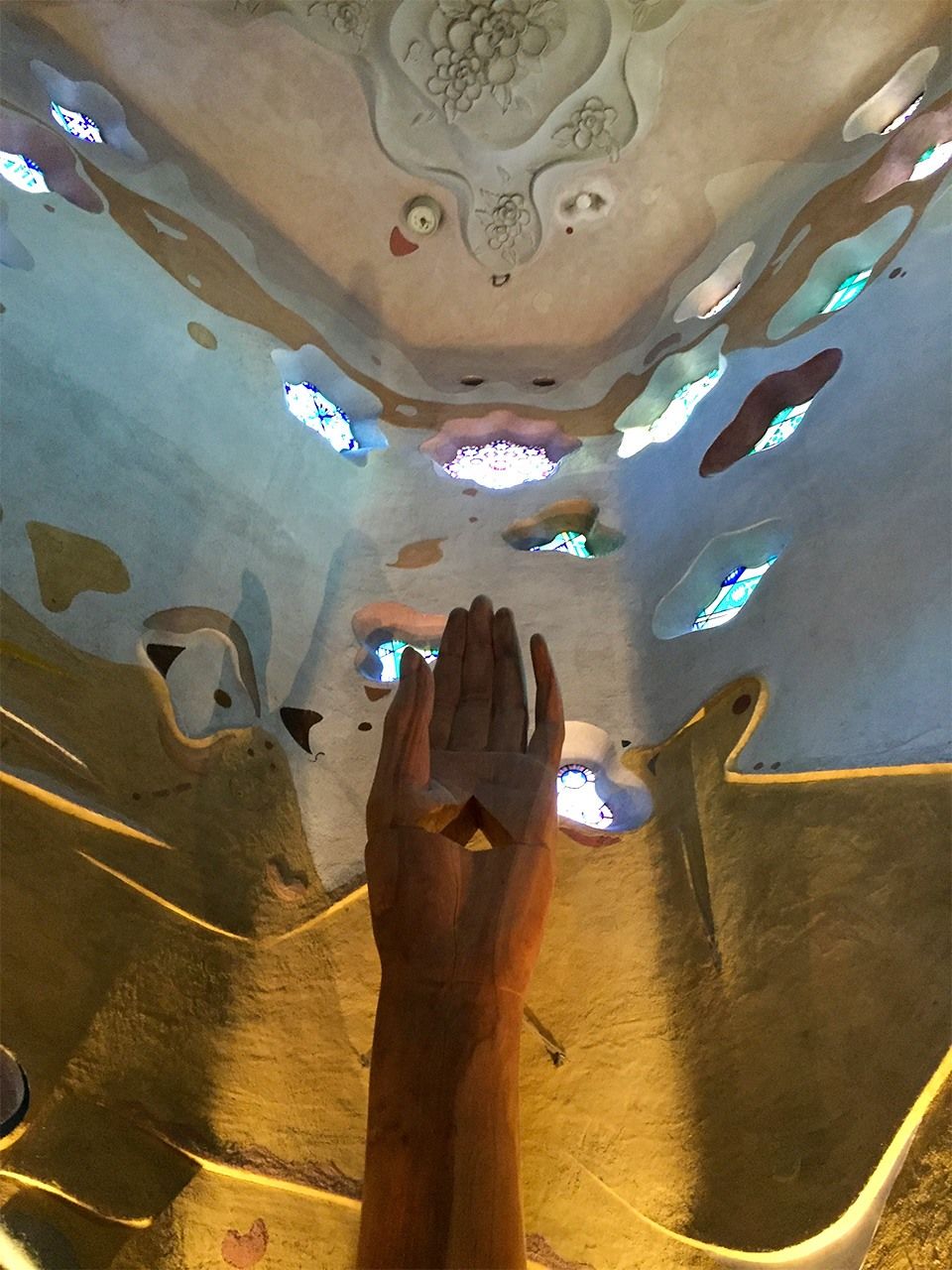 Inside the mortuary at the Mukōdai Home for the Aged 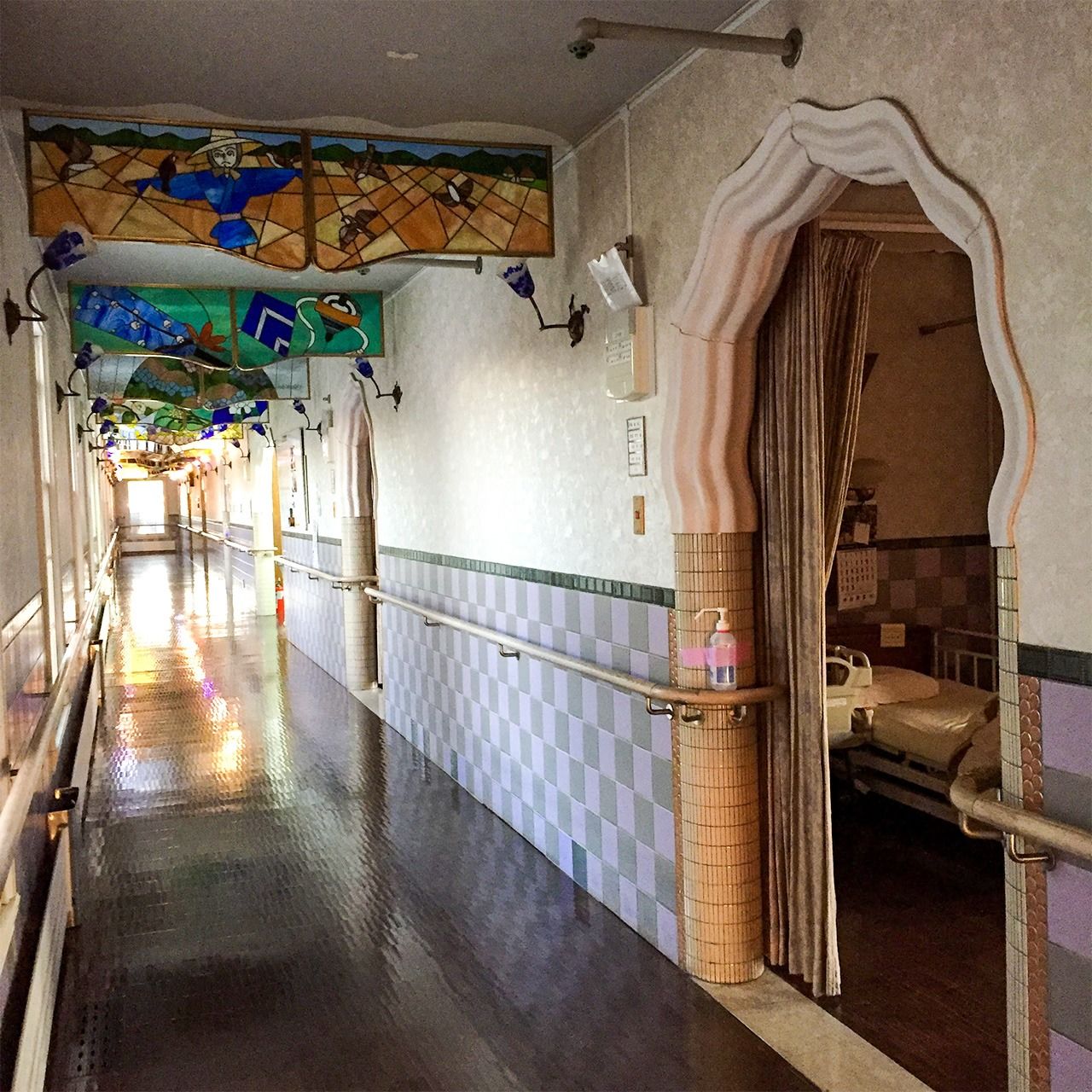 The corridor ceilings of the building are decorated with stained glass depicting scenes from the four seasons.

Von collaborates with other architects and artists to realize his imaginative ideas. He has joined hands with other creators to imbue his architectural spaces with the joy of living. How many architects in Japan today truly embrace or even understand his approach or the ideas fueled by his desire to fulfill his responsibility as an architect? Architecture in Japan today is dominated by the plodding, self-absorption of the people Von refers to dismissively as “building designers,” with the sad result that Tokyo’s streets are too often dominated by uninspiring buildings that fail to move the people who live in and among them. In contrast, Von Jour Caux has spent his life bringing colorful, inspiring vision to the metropolis. 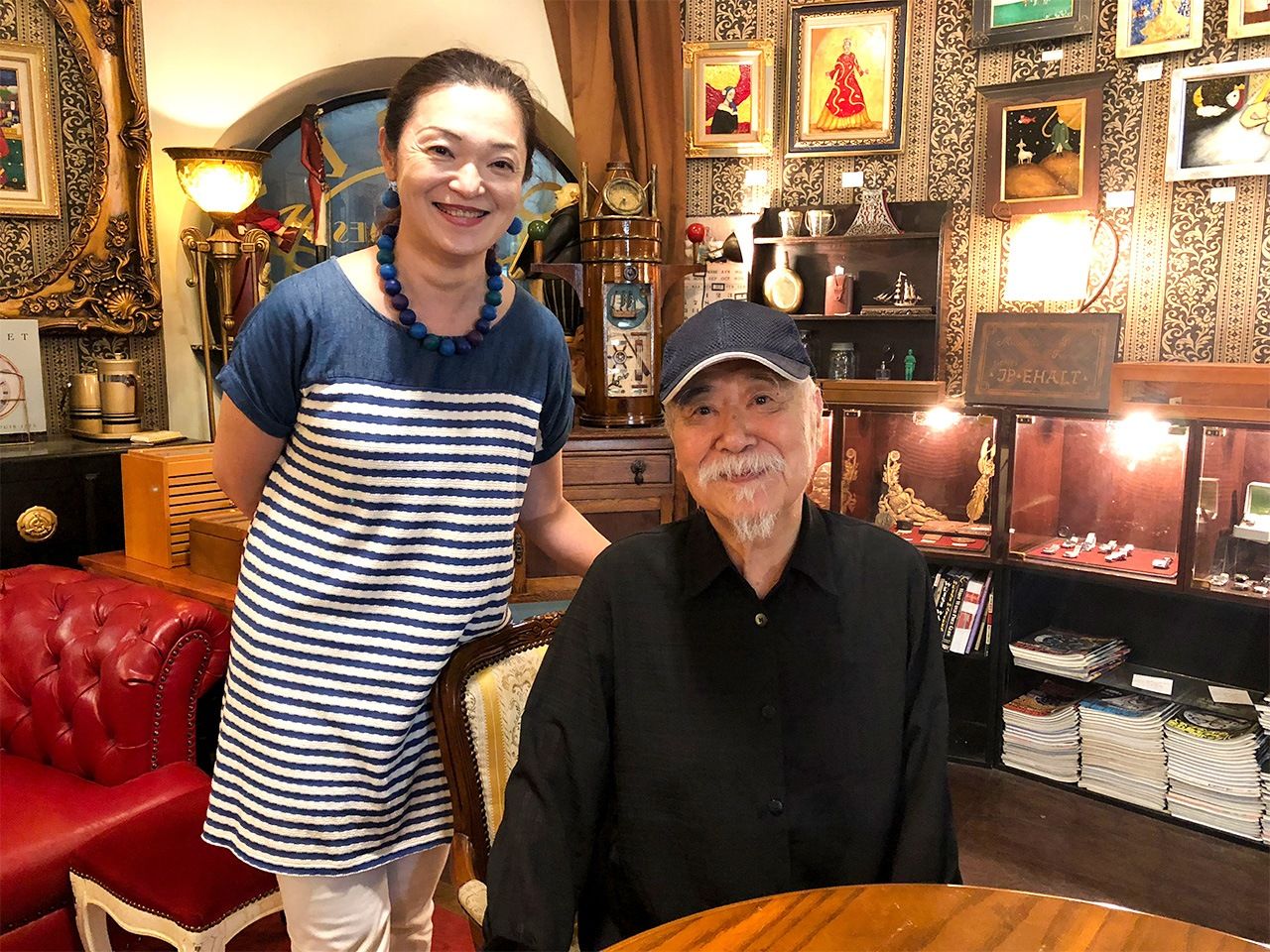 The author with Von Jour Caux.

(Originally published on May 28, 2019. All photos by the author. Banner photo: The Philosopher’s Stone from the elevator hall inside the Hiraki Building in Ikebukuro, Tokyo.)