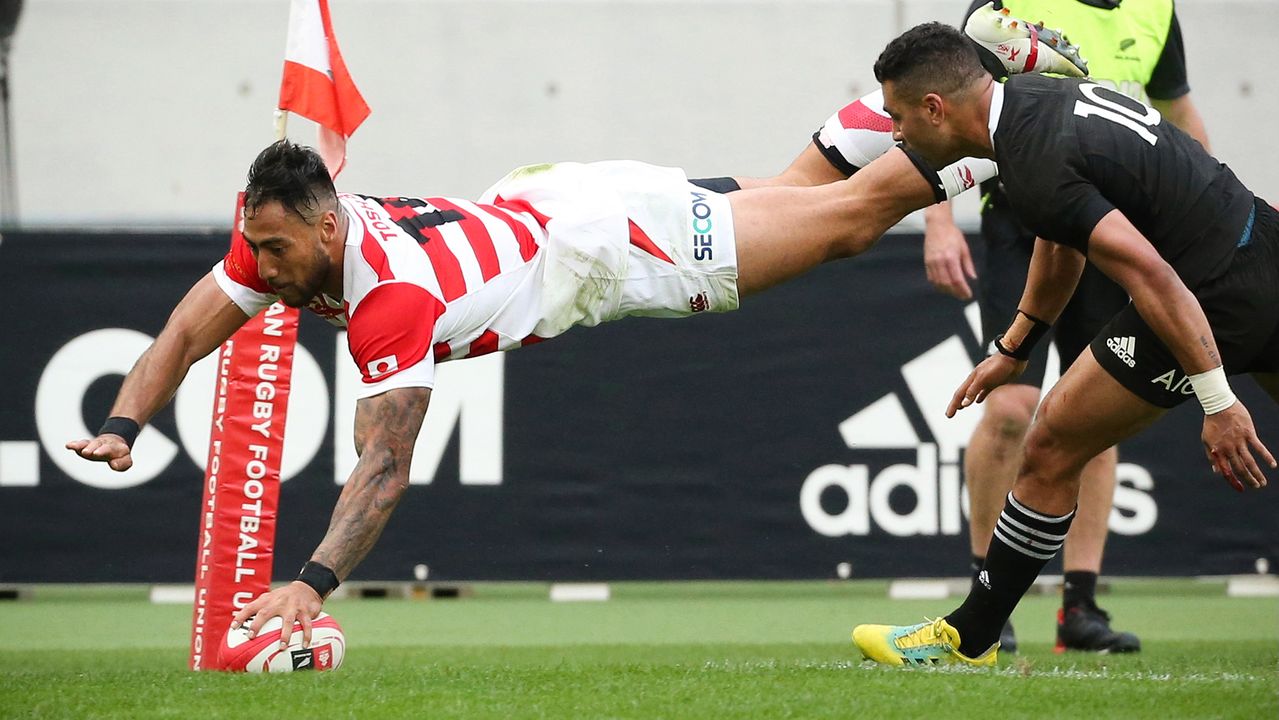 Sports Aug 16, 2019
The 2019 Rugby World Cup is set to kick off on September 20, in Japan. The Japanese national squad still bears the significant impact of former coach Eddie Jones, but what can we expect from the Brave Blossoms under current coach Jamie Joseph?

Toward the end of this summer, Japan will host the Rugby World Cup.

“When I was head coach for Japan, I couldn’t get a test match with a Tier 1 [top 10] team. In the lead-up to the 2014 World Cup, Japan played in test matches against Romania and Georgia. It’s all changed now. Japan has played against the [New Zealand] All Blacks and can compete with England at Twickenham. too. This shows how far Japan has come in the world of rugby.”

In this test match, Japan proved their worth against England, a team strong enough to win the World Cup. In the first half, the forwards were competing on equal terms, with the tide in favor of Japan, which took a 15–10 lead. In the second half, England regrouped, eventually defeating Japan 35 to 15. Nevertheless, Japan was a formidable competitor. 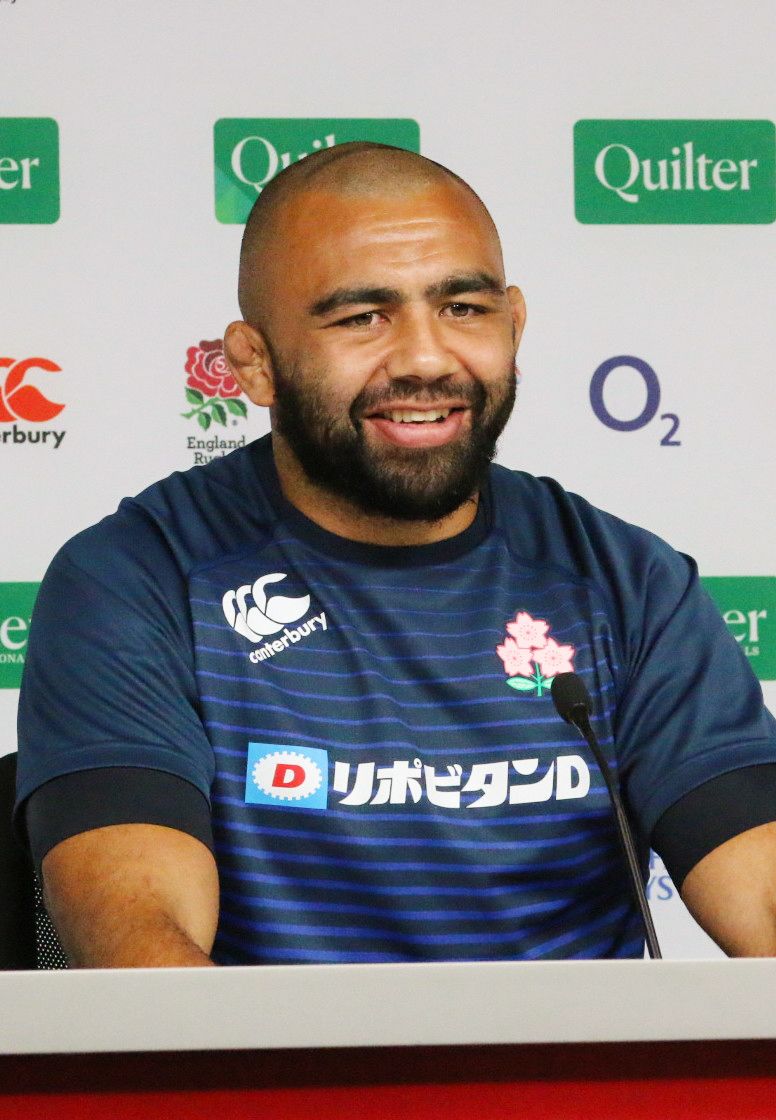 At a press appearance in Twickenham, England, on November 16, 2018, Japan’s captain Michael Leitch expressed his enthusiasm ahead of the match with England. (© Jiji)

In an interview after the match, Jones said: “I’m very pleased with the performance of Japan’s team today. There’s no doubt that it has boosted its standing in the rugby world. Also, it attracts more attention from the Japanese media. Japan now has a rugby community. Head coach Jamie Joseph and [assistant coach] Tony Brown are doing a great job in formulating attack plans, and we are seeing a succession of young, talented players making a break under the remarkable captaincy of Michael Leitch.”

He is right. The team is making solid progress. In 2019, it continues steady preparations for the World Cup. Team members have wound up their participation in the national league to allow more time to prepare for the tournament. The team has also held numerous training camps since February.

Apparently, the team has boosted its training intensity beyond even that under Jones, who was known for demanding hard work. One player commented that “We made it through a tough round of training without injury. If it wasn’t tough, it wouldn’t make an impression on the team members.”

Joseph’s expectation of toughness from the players is sure to continue in the lead up to the main tournament. Immediately prior to the World Cup, on September 6, Japan has a test match scheduled with arch-rival South Africa in Kumagaya, Saitama.

No Option Except Winning

Playing against such a strong competitor before the World Cup is risky. Injuries are a concern. It is an unusual move, but the team is training hard until the final hour in an effort to assemble the toughest team possible for the World Cup.

In the four years since the last World Cup, Japan’s team has competed against the world’s strongest, and consequently the players have developed a new mindset. They realize that it is more than just a struggle against champions—there is no option except to win. It is not only the players whose mindset has changed. Japanese fans have changed too.

On November 3, 2018, Japan played the All Blacks at Ajinomoto Stadium, Tokyo. Japan fought admirably in the first half, but in the second half, with the team showing strain, the disappointment of the fans was palpable as they saw their team robbed of its last five tries. I was surprised at their reaction. 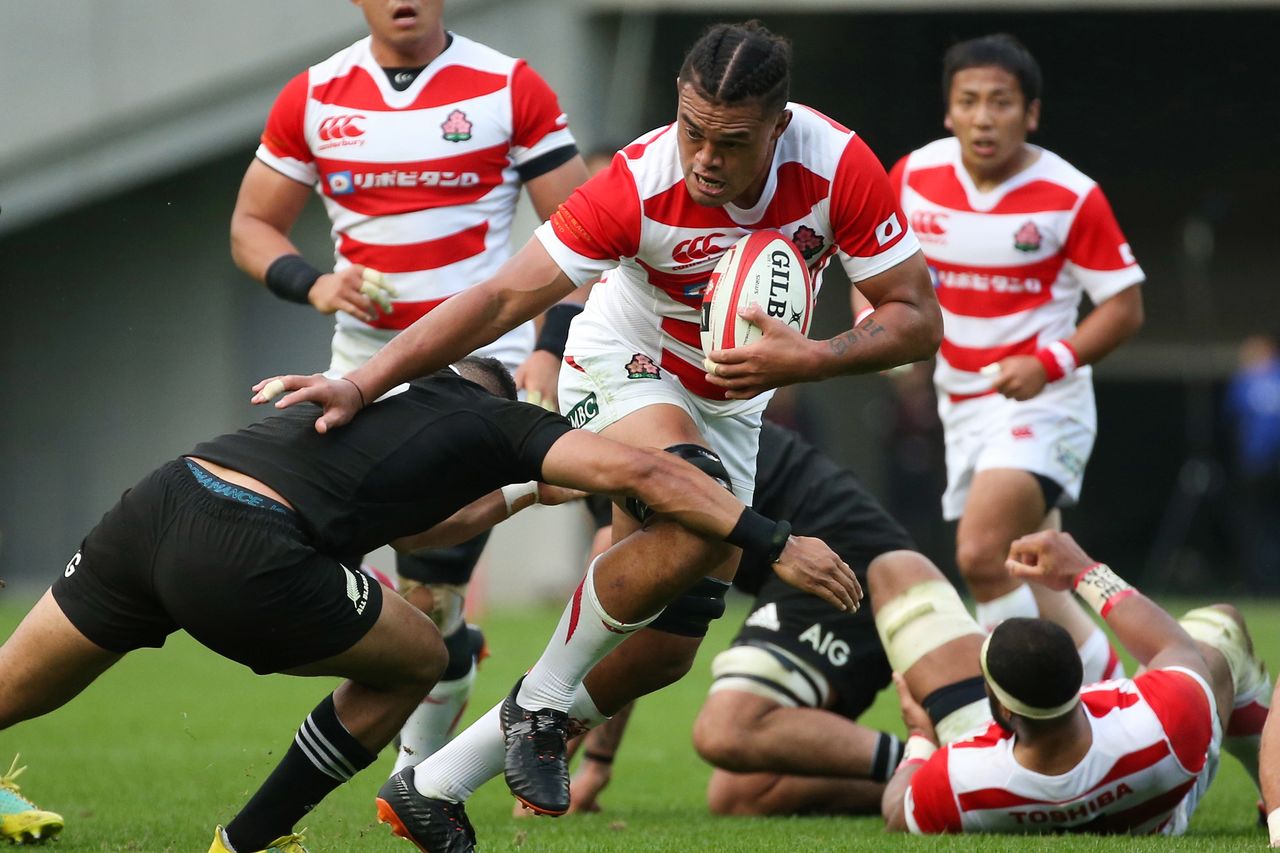 In the test match against New Zealand, Japan’s Hendrik Tui scored a try in the first half. Ajinomoto Stadium, Tokyo, November 3, 2018. (© Jiji)

The All Blacks visited Japan after their first World Cup win 32 years ago, in 1987. I was a university student when I watched their second test match against Japan at Tokyo’s New National Stadium. I recall that Japan’s “Mr. Rugby,” Hirao Seiji of the Kobelco Steelers, was the key player in this game, but Japan was defeated 106 to 4. The team was no match at all for the New Zealand powerhouse.

Despite this, I was not ashamed to be Japanese. I had never hoped that Japan could win in such a mismatch given the obvious difference in the abilities of the two teams. In fact, I recall the cheering from the stands at the All Black’s display of such awesome play. Japan adored the All Blacks.

In 2018, by comparison, fans who witnessed Japan’s defeat of South Africa in the World Cup were hoping for a favorable match, even against the All Blacks. They were keen for an unlikely win, and viewed Japan’s 69–31 defeat as a great disappointment. The enthusiasm of fans pinning their hope on the Japanese team will doubtless be significant ammunition in the World Cup this year.

The Risk of Excessive Enthusiasm

Nevertheless, this is the first time the Rugby World Cup will be staged in a non–Tier 1 country since the inaugural Cup in 1987. Some have expressed concern about the pressure from support for the Japanese team and also about enthusiasm for the World Cup as a whole. Perhaps no one is as conscious of this as the Japanese team members who have extensive overseas playing experience.

Players who took the field in the tournaments in 2011 in New Zealand and England in 2015, as well as in overseas test matches, have first-hand experience of the significance of rugby in the lives of people in the leading nations.

Will Japan be able to deliver the same level of excitement and hospitality as previous host countries? Furthermore, will Japan, which lacks a deep-rooted rugby culture, be able to satisfy the expectations of foreign players? Many team members hold such concerns. 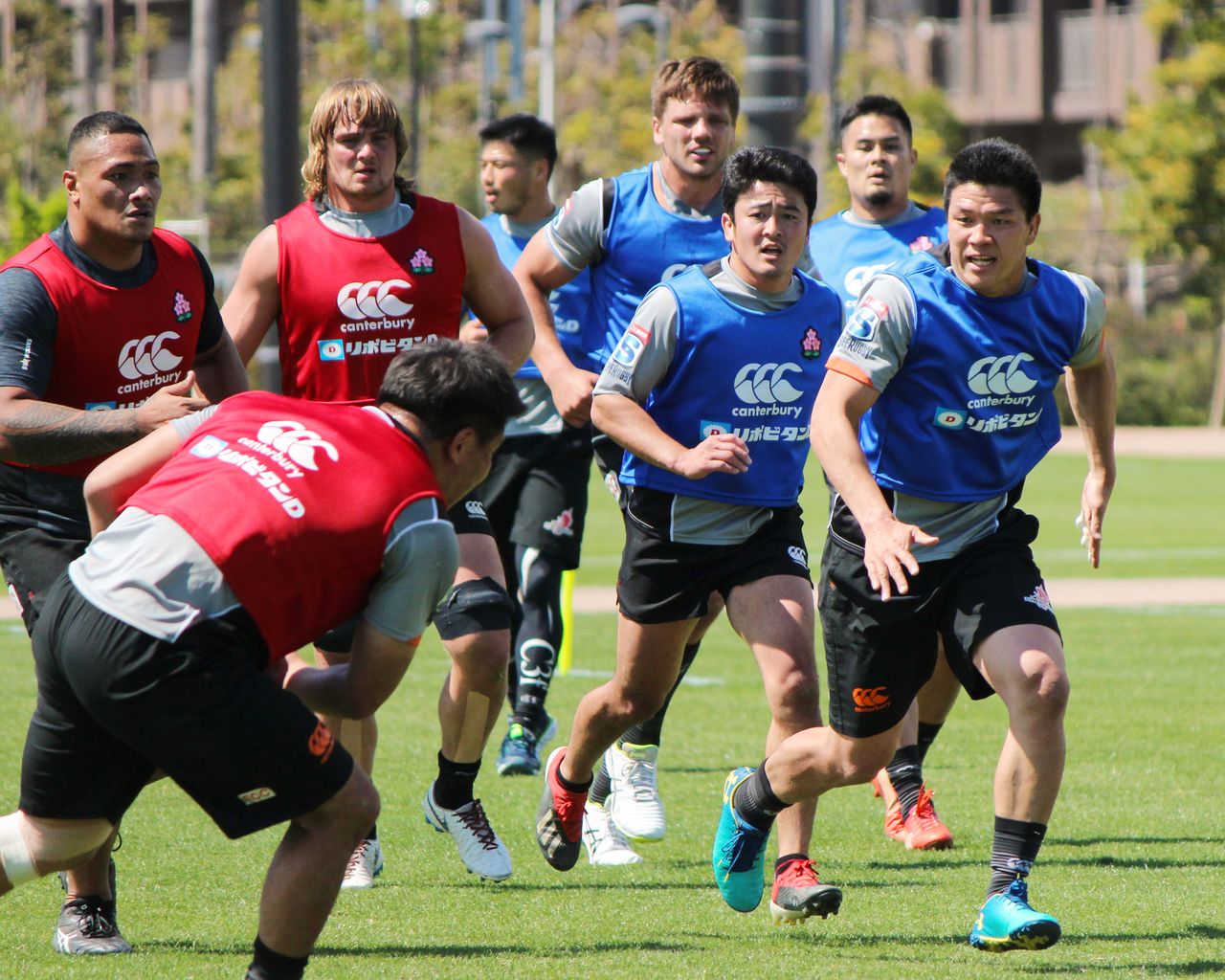 Yamada Akihito, who played wing for Japan in the match against England, explains his thoughts. “Before the last World Cup, only a handful of Japanese showed any interest in rugby. Consequently, I personally had concerns about Japan hosting the 2019 event.” Japan’s victory against South Africa, followed by three wins in the group stage of the 2015 World Cup 2015, built buzz for the team and its sport, but that can only be first step. “In the upcoming competition, I think it’ll be important for rugby to be on television all over Japan, and is a hot topic in workplaces and schools.” Yamada believes that a win by Japan is the quickest way to achieve this.

Japan vs. Scotland: A Crucial Game

As of early May, Japan was ranked number 11 in the world, placed in Pool A for the World Cup, and scheduled in the following matches:

At the 2015 World Cup, Japan enjoyed three wins and one loss, equal with South Africa and Scotland, but these two teams were among the eight that progressed to the knockout stage, thanks to bonus points, while Japan missed out.

This year, Japan must finish in the top two countries in its group league. The team cannot allow a defeat by lower-ranked Russia, nor by Samoa, who the Brave Blossoms beat in 2015. In addition to securing these two wins, Japan also needs to defeat either of the higher-ranked Ireland or Scotland.

The final match against Scotland will be particularly significant. In Pool A, Ireland is ranked slightly above both teams. Japan believes that if it and Scotland reach the final match with two wins and one loss, the winner will have a shot at progressing to the final eight together with Ireland.

Japan’s team has never faced such a “must-win” situation on home soil. It will be a true test of the team. Indeed, in an interview in Tokyo this April, Eddie Jones described Japan’s upcoming match against Scotland as a “crucial game.”

Going beyond the tournament, though, a win against Scotland is needed to boost Japan’s rugby culture.

I have seen the enthusiasm for rugby that exists in other countries. In London, I saw people of all ages catching trains from Waterloo Station hours ahead of the test match, all dressed in England team jerseys. In New Zealand, I saw elementary school students nonchalantly bouncing rugby balls on the ground as they walked to school. At the 2003 World Cup, I heard the Australian fans sing the popular folk song “Waltzing Matilda” to counter the All Blacks’ prematch performance of the Maori Haka.

The World Cup is a contest between teams in tandem with fans. The question remains as to how much Japan’s team can inspire the nation in the lead up to the start of the World Cup, on September 20. The time has come for those involved in rugby in Japan to prove their worth.

(Originally published in Japanese on May 23, 2019. Banner photo: Jamie Henry scores a second-half try for Japan against New Zealand in a November 3, 2018, test match. © Jiji.)