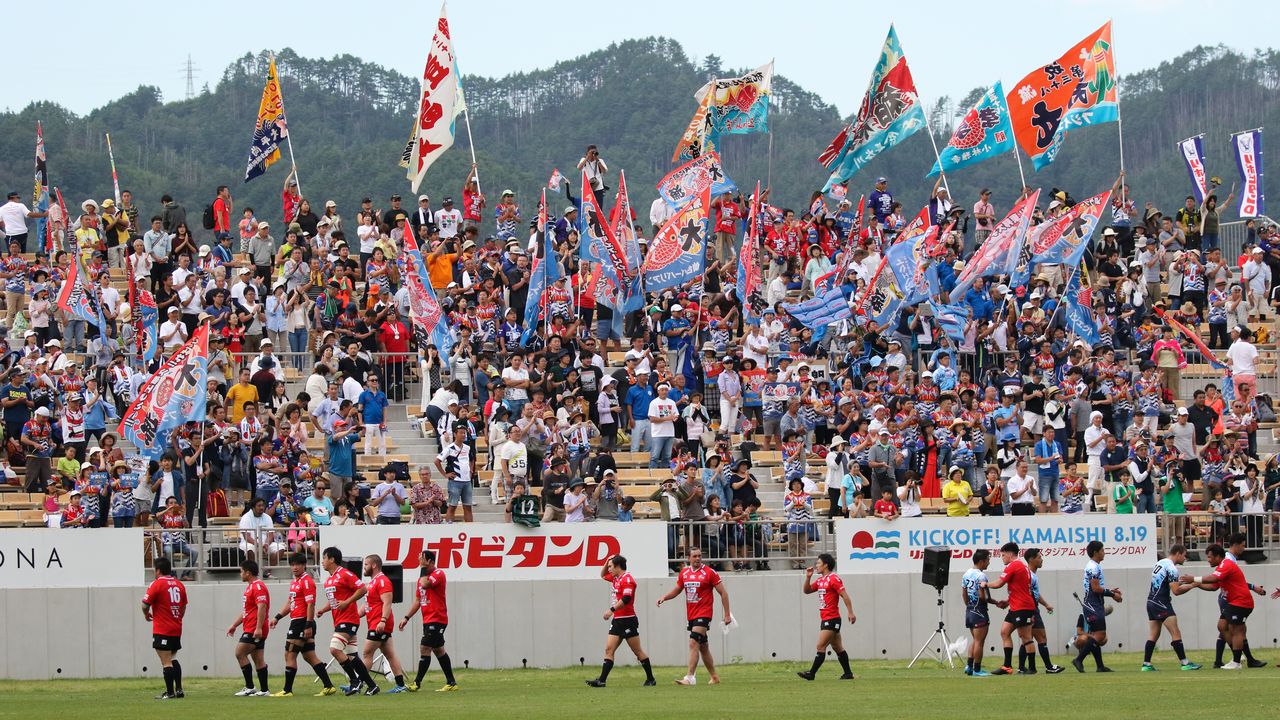 A Japanese Rugby Legend and Tōhoku’s Stadium of Hope

Sports Travel Lifestyle Aug 5, 2019
Kamaishi Unosumai Memorial Stadium is the only new venue among the 12 lined up for this year’s Rugby World Cup in Japan. What does it mean for Kamaishi––a city with a strong rugby heritage, but also hard hit by the 2011 Great East Japan Earthquake––to have the World Cup coming to town?

The Rugby World Cup 2019, set to kick off in Japan on September 20 this year, is the first not to be held in a traditional rugby powerhouse nation. It will also be the global launchpad for a new venue in the city of Kamaishi that is almost certain to be the subject of widespread attention.

As of April 2019, Kamaishi in northeastern Iwate Prefecture had a population of 33,414. The capacity of the newly constructed Kamaishi Unosumai Memorial Stadium is a slender 16,000. Both figures are the lowest of Japan’s 12 World Cup host venues.

The Great East Japan Earthquake that hit Japan’s northeastern Tōhoku region on March 11, 2011, resulted in 18,500 dead and missing. The disaster’s tsunami engulfed Kamaishi, which counted 973 victims among its population. The town’s World Cup stadium has been built on the sites of the former Unosumai Elementary School and Kamaishi Higashi Junior High School, both of which were destroyed by the full force of the massive waves. The Unosumai district itself lost 586 residents, 60% of the city’s total.

So why hold the World Cup on this disaster-hit site? 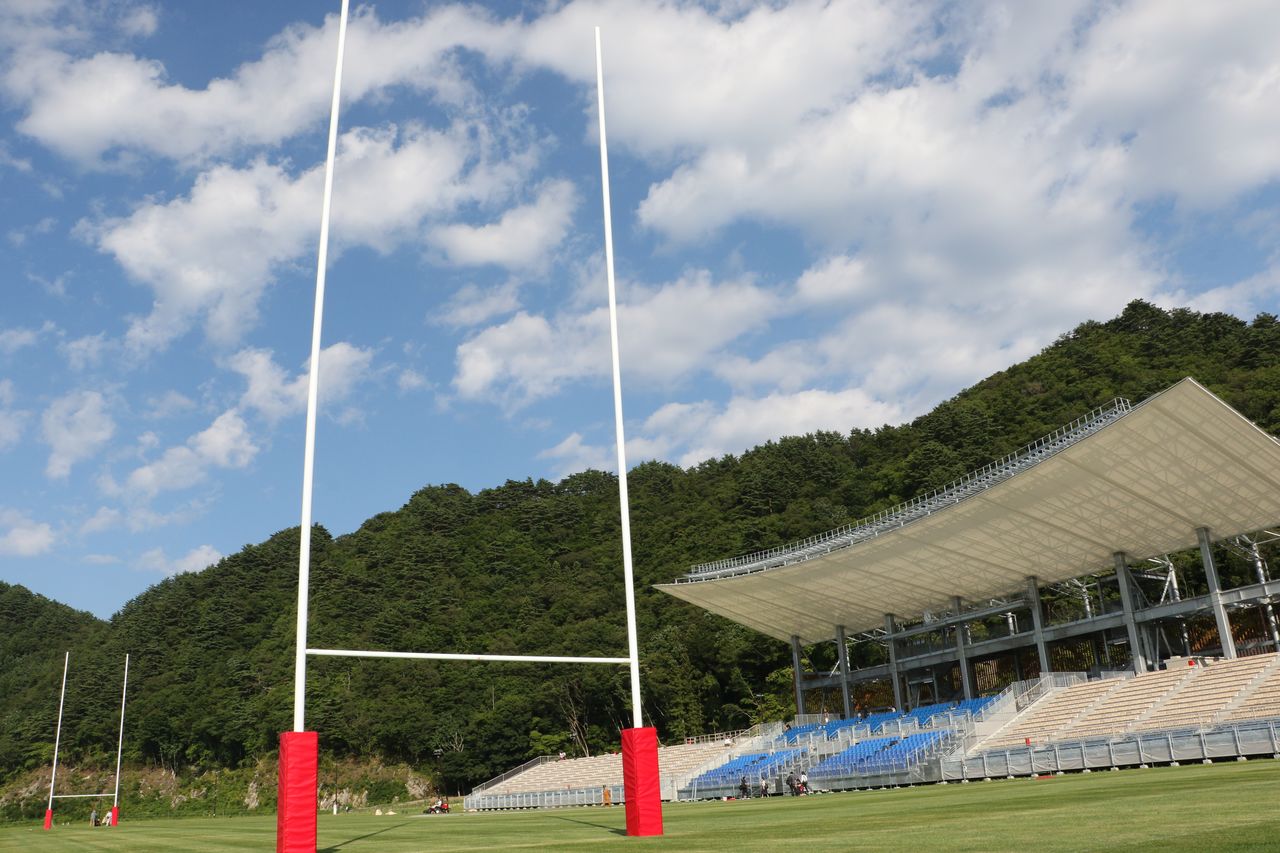 The 16,000-capacity Kamaishi Unosumai Memorial Stadium. At 17 meters, its World Cup-standard goal posts are the tallest in Japan.

A Legendary Team Becomes a Standard-Bearer for Recovery

Kamaishi was once home to one of Japan’s top rugby teams. From the late 1970s into the 1980s, Nippon Steel Kamaishi won the All-Japan Rugby Championship seven times running. Fishing boat flags called furaiki that are synonymous with this port town would fly high in Japan’s National Stadium as 60,000 spectators packed the stands each year for the annual showdown in Tokyo. The Kamaishi players were dubbed the “northern iron men,” and the town itself became known nationwide as the “City of Iron” or “Rugby Town.”

The unbroken run of victories for Nippon Steel Kamaishi came to an end in 1985. The company’s rugby division was suffering in parallel with the shrinking local steel industry. Nippon Steel announced that it could no longer manage the team alone, and in 2001 it was reorganized into a community-based club that has continued to this day as the Kamaishi Seawaves. Since 2011, the team has become a symbol not just of Kamaishi, but of the wider, disaster-stricken Tōhoku region as a whole.

Starting on March 12, 2011, relief supplies started pouring into Kamaishi from all over the world. The huge truckloads of food, water, clothing, and cold-weather protection that continued to roll in overwhelmed the exhausted locals, who had just had their lives shattered and basic lifelines severed. The players of the Kamaishi Seawaves then leaped into action.

The well-trained athletes had no trouble hoisting two or three heavy cardboard boxes at a time off truck beds and delivering them to collection points, or carrying the sick and elderly out in their arms or by piggyback from hospitals and care facilities with no functioning elevators. 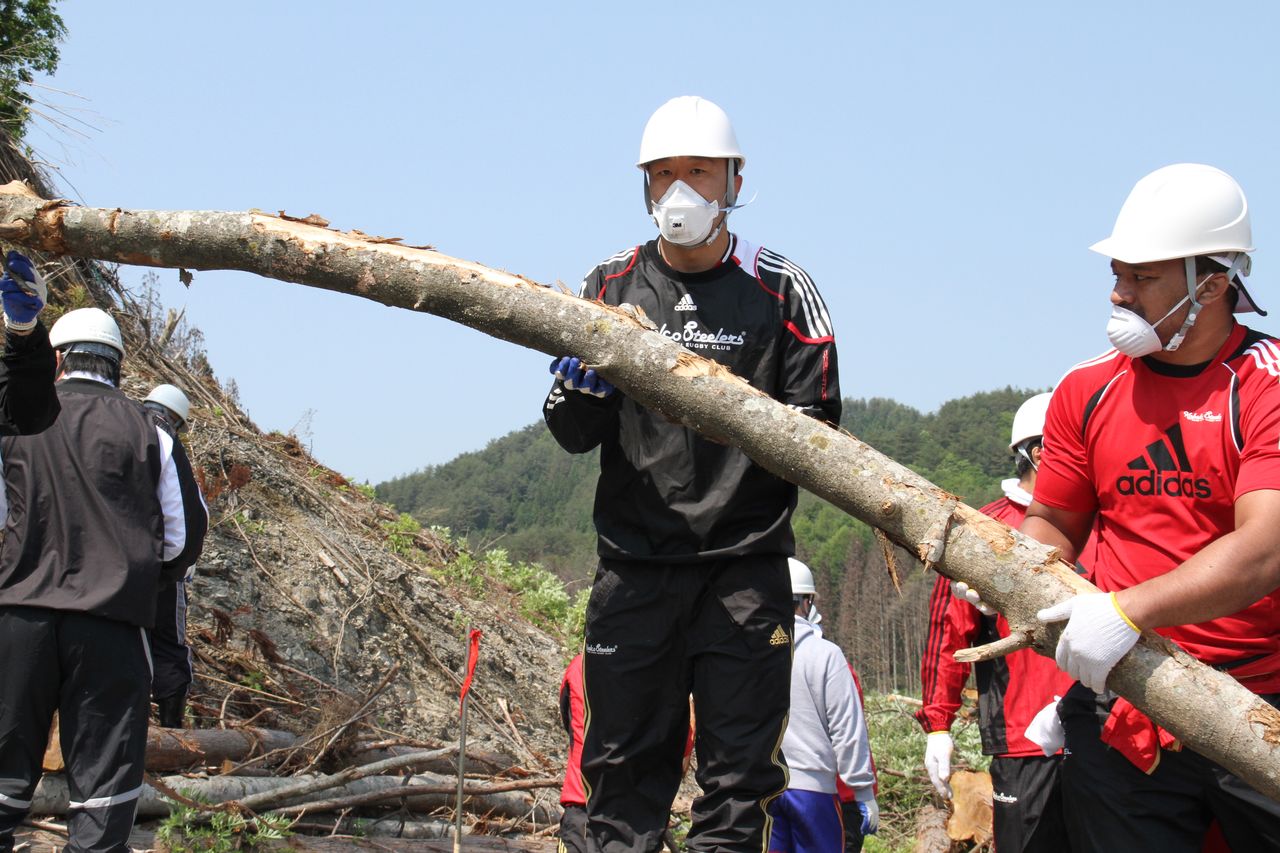 Worried about the impact of the badly damaged Fukushima Daiichi nuclear reactor, one embassy in Tokyo sent a vehicle to remove its citizens on the team from harm’s way, but the players would not leave the area. “These people are always helping us,” reasoned the players, “so now it’s our turn to help them.”

After this work had continued for a while, though, the locals stopped expressing their gratitude. Their message to their team? “That’s enough of that. Start practicing your game!”

The people, whose entire community had been pushed to the borderline between life and death by the 3/11 waves, were now telling their local team to be a standard-bearer for the town’s recovery.

Three months after the disaster, people were beginning to think that Kamaishi could play a part in hosting the World Cup. The city still lay in ruins, but by the time the tournament would be held, eight years later, it should have recovered. It would be wonderful to let visitors from around the world see a revitalized Kamaishi and to thank them for the support they had offered to the stricken town.

Many thought this was a ridiculous idea, feeling that that local reconstruction should come first, but there were more than a few believers in the idea that their tsunami-hit home deserved its dreams, too.

A Rugby Legend Backs the Dreamers

One man who attended a Kamaishi town meeting in June 2012 offered locals his passionate encouragement. This was Hirao Seiji, a Kobelco Steelers player who had been a regular foe of the Nippon Steel team. “Mr. Rugby,” as he became known, went on to become captain and coach of Japan’s national team, but had also lived through the Great Hanshin Earthquake in Kobe in 1995.

The celebrity visitor put it this way: “They say the World Cup will bring hundreds of billions of yen worth of economic benefit. But if you ask me, it’s not about that. For the next seven years, the people of this town will live with a dream and a goal. That’s worth far, far more.”

Wheels began to turn, and more local residents began to voice support for bringing the World Cup to town. Then, when Japan was announced as the next host nation on March 2, 2015, national headlines trumpeted that Kamaishi would be one of the 12 host cities. The city’s older students threw themselves into their foreign language studies, while youngsters at kindergartens and grade schools started world map and national flag familiarization.

In 2012, one year after the disaster struck, junior high school students from Kamaishi started travelling to New Zealand, which had suffered a major earthquake a month before the 3/11 disaster. During their stay in the three-time World Cup-winning nation, the young emissaries exchanged stories about what they had been through and their hopes for the future, but also communed through rugby. In 2015, a junior high school group was sent to England to watch the Rugby World Cup. There they saw Japan achieve three great wins in the tournament, but were equally impressed by the way fans from all over the world celebrated together regardless of how their teams performed. The Kamaishi youngsters resolved to do everything they could to make the Japan tournament a rousing success four years later.

Kamaishi’s youth had turned their eyes to the world and launched into action. The appetite for recovery had merged with high hopes for the World Cup and it had become normal for people to “live with a goal,” as Hirao had predicted. (Sadly, the former fly-half passed away in 2016 at the age of 53, before seeing the World Cup take place in the Tōhoku venue.) 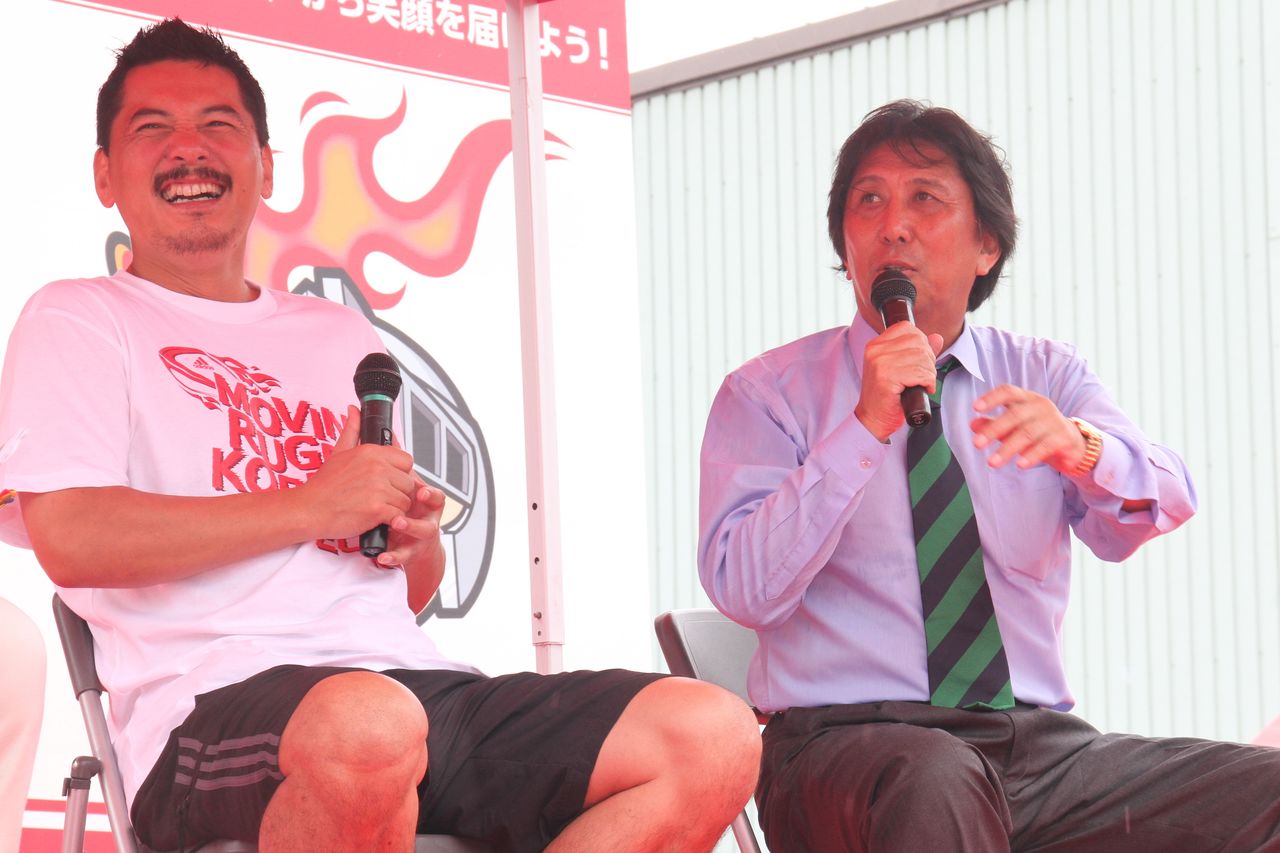 On August 19, 2018, the inaugural match was played at the new Kamaishi Unosumai Memorial Stadium to commemorate its completion.

In the curtain raisers, junior high schoolers—young players who had been raised in Kamaishi, who had lived through the disaster, and who bore its undeniable scars—competed energetically on the field. They were followed by old boys from Nippon Steel Kamaishi and the Kobelco Steelers who had competed at the top of their league back in the day, and now shared having survived a major disaster at home. All seemed to enjoy chasing the ball around the field together once again.

In the ceremony before the main game, Horaguchi Rui—a high-school student who had been a third-grader in 2011—gave a speech in Japanese and English expressing her feelings for her hometown and the community’s gratitude for the support it had received from around the globe. Her words represented how residents were moving past the heavy hours, days, and years that had followed the disaster, setting off into a new era at last.

In the main game, the second-division Kamaishi Seawaves put up a brave fight against first-division Yamaha Jubilo despite their lower league status. While they lost 29–24, they livened up the celebratory match with four tries and an admirable display of tenacity as colorful furaiki fluttered proudly around the new stadium. 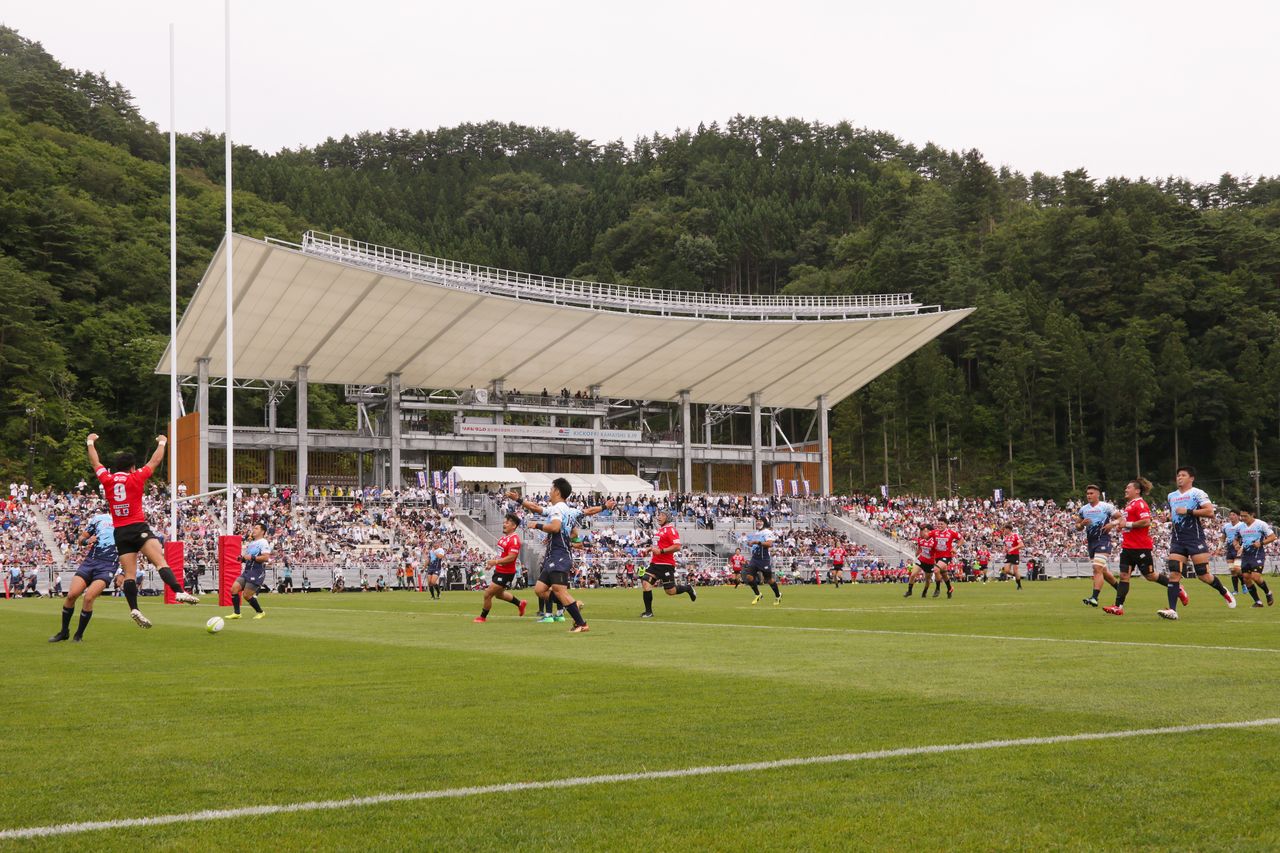 Kamaishi will only host two World Cup matches—Fiji vs. Uruguay, to be held on September 25, and Namibia vs. Canada on October 13. This is fewer games than will be held in any other host city, and there are no Tier One teams involved. But you are unlikely to hear many complaints from locals. Local children are already starting to bone up on the Fiji national anthem, Spanish as spoken in Uruguay, and the histories of Namibia and Canada.

Kamaishi is certainly not going to be the venue attracting the most spectators this year. And if you ponder which game will be remembered as the most thrilling of the tournament, again, it is unlikely to be one held in Tōhoku. But Kamaishi will undoubtedly play host to its four teams with a special warmth that ensures they enjoy their stay and leave happy.

It will be a win for Kamaishi if some of the players from the 20 participating nations and their fans are heard making comments like “We played in a lot of places in Japan, but Kamaishi was the best” or “We only saw Kamaishi on the news, but it would’ve been great to play there”after the tournament is over.

(Originally written in Japanese by Ōtomo Nobuhiko. Banner photo: A flotilla of furaiki fishing boat flags that previously flew over Japan’s National Stadium flutter at the grand opening of the Kamaishi Unosumai Memorial Stadium. All photos © Ōtomo Nobuhiko except where otherwise noted.)