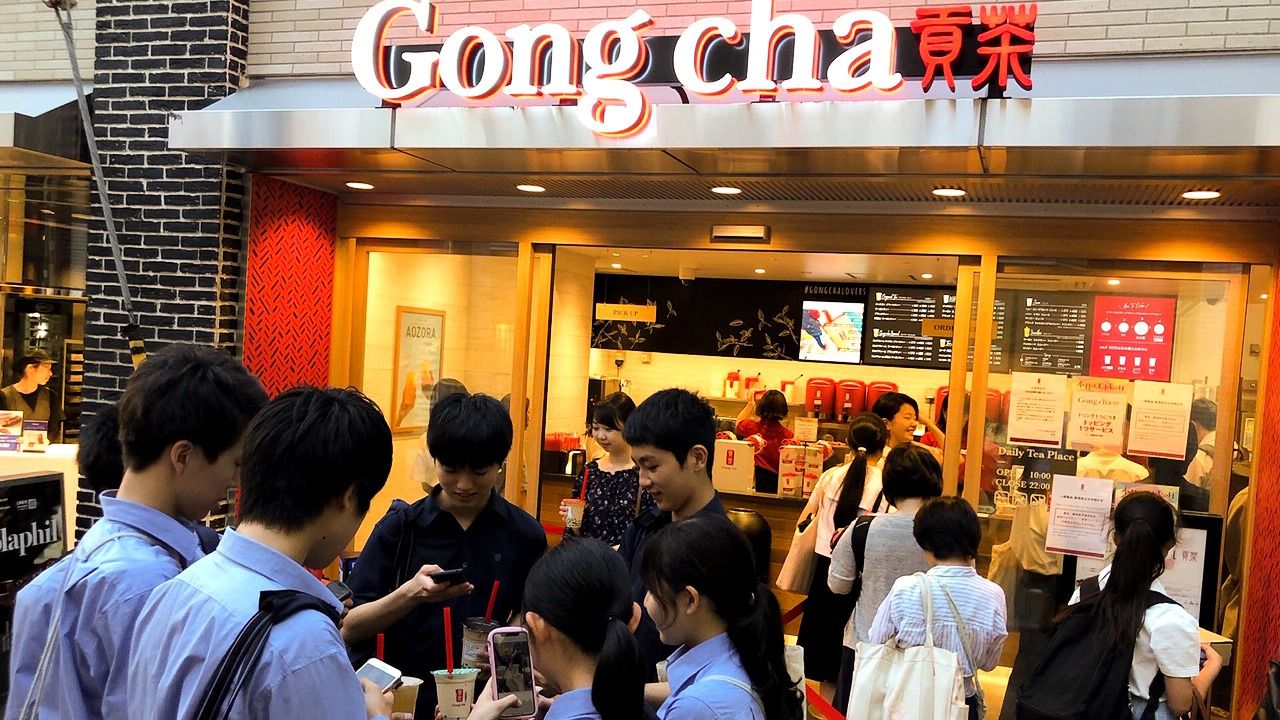 Lifestyle Food and Drink Sep 16, 2019
The tapioca drink boom is in full swing in Japan, but many foodies are watching to see if bubble tea will prove to be a passing fad or take its place along other Taiwanese culinary imports.

It seems that every neighborhood I visit in Japan these days is in the throes of tapioca drink fever. Television shows rave over bubble tea, although coverage has slowly begun to highlight less positive aspects, such as that tapioca drinks are high in calories—there are just as many as in a bowl of rice—and that the proliferation of bubble tea shops has created a littering problem. Looking around, though, I feel as if Japanese consumers are still spellbound by the newness of bubble tea.

This can be attributed to the fact that the drink is a relatively recent phenomenon in the country. Bubble tea has its roots in a beverage of Taiwanese origin called tapioca milk tea. Tapioca was already part of the culinary culture of Taiwan, but back in the 1980s some creative people thought to combine it with milk tea, and the concoction quickly took off. One story credits Chunshuitang, a restaurant in Taichung, as the birthplace of bubble tea, while another version claims that the eatery Kanlinchakan in Tainan came up with the idea first.

I never encountered bubble tea when I lived in Taiwan from 1970 to the early 1980s. Today, though, shops selling tapioca beverages line the streets and drinks are ubiquitous, available at any time of day or night to anyone who gets a craving for one.

Despite the sheer profusion of bubble tea shops in Taiwan, most outlets have managed to prosper by offering a diverse selection that includes standard favorites along with signature products. Thanks to the bold, outside-the-box thinking of Taiwanese entrepreneurs, the tapioca milk tea market continues to thrive.

Take for example the numerous tea varieties used as the base of beverages. Many shops offer choices ranging from British-style black tea to multiple types of Chinese oolong tea. Tapioca drinks can also be concocted from fresh fruit juice like lemon, pineapple, orange, or strawberry.

Add-ins other than tapioca are also abundant, including popular choices like nata de coco, aloe, konnyaku, grass jelly, adzuki beans, and mung beans. Depending on the season, mango and taro root may also appear on menus.

Whenever I travel to Taiwan, I make sure to try out a new type of bubble tea. My latest experience was with a mixture of sweet yogurt-like drink and lemon juice in a green tea base with tapioca, custard pudding, minimal sweetener, and no ice. The combination may sound off-putting, but the taste experience was actually quite pleasant. The acidic flavors of the lemon and the yogurt played off each other, heightening the refreshing taste of the green tea. I found the soft, chewy tapioca pearls I sucked up through the straw and the smooth texture of the pudding exquisite. 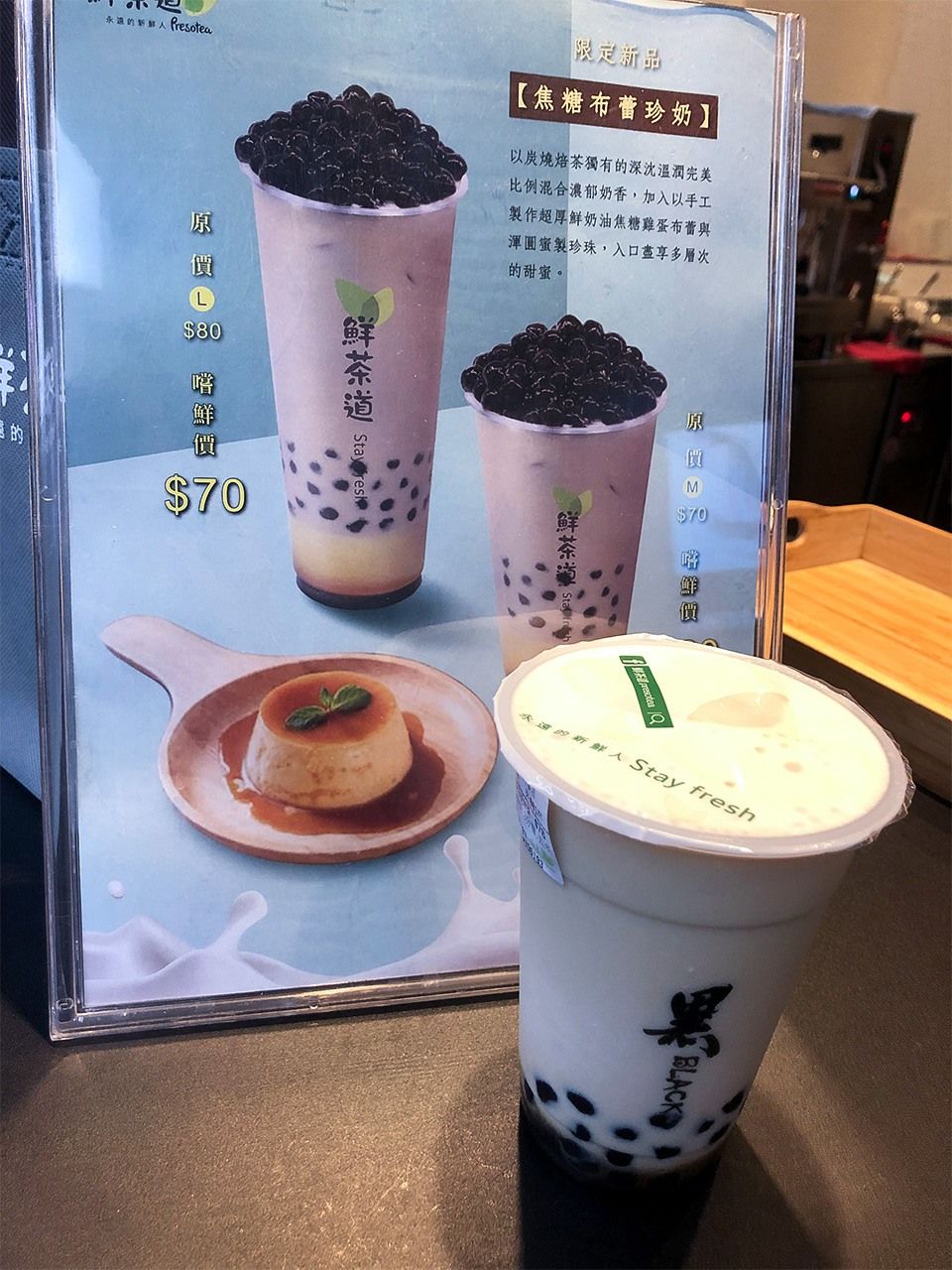 Japanese customers would likely balk if confronted by such an array of choices. However,  Taiwanese customize their drinks as a matter of course, rattling off their preferences to store staff who deftly take the complex orders and swing into action preparing drinks.

Tapioca has been available in Japan since the 1990s. In those days, the small white pearls were typically served in coconut milk and eaten as a dessert. The tapioca business has since evolved and grown due to more Japanese visiting Taiwan for tourism and the impact of social networks like Instagram.

Mostly flavorless, tapioca’s main attraction is its chewy texture. It is derived from starch extracted from the roots of cassava, a tropical plant native to Central and South America that spread throughout the world in the sixteenth century. Africa grows about half of the world’s cassava, and the remaining half of the crop is split evenly between Southeast Asia and Central and South America. Cassava is consumed in a variety of ways other than tapioca. Fufu, cassava starch shaped into cake-like patties, is a staple food in Africa, and pão de queijo, a Brazilian cheese bun that is a favorite of mine, includes cassava as an ingredient.

Raw tapioca powder is generally semi-translucent and has little smell or taste. Manufacturers form it into the familiar pearls of bubble tea, often adding sweeteners like brown sugar or fruit syrup along with food coloring. Chewy and satisfying, tapioca is a wonderful snack to fill a growling stomach. The unique texture of the pearls has won legions of fans, helping tapioca beverages spread from Taiwan to Hong Kong, mainland China, the United States, and finally Japan.

Japan’s tapioca boom has spawned its own lexicon that ardent fans use to describe their passion for the beverage. One new word, the verb tapiru meaning to go out for a tapioca drink, even topped a 2018 list of teenage girl slang.

The burgeoning tapioca business has its downsides, though. Some tapioca varieties contain other types of processed starch in addition to cassava. Some Taiwanese producers have taken this a step too far and have even been prosecuted for adulterating their product with additives for industrial use. In one case, a man in China was discovered to have a substance in his stomach that turned out to be undigested tapioca pearls made from materials used to produce rubber and tires. Although such cases are isolated, the growing demand for tapioca could encourage similar nefarious acts and negatively impact the image of bubble tea. 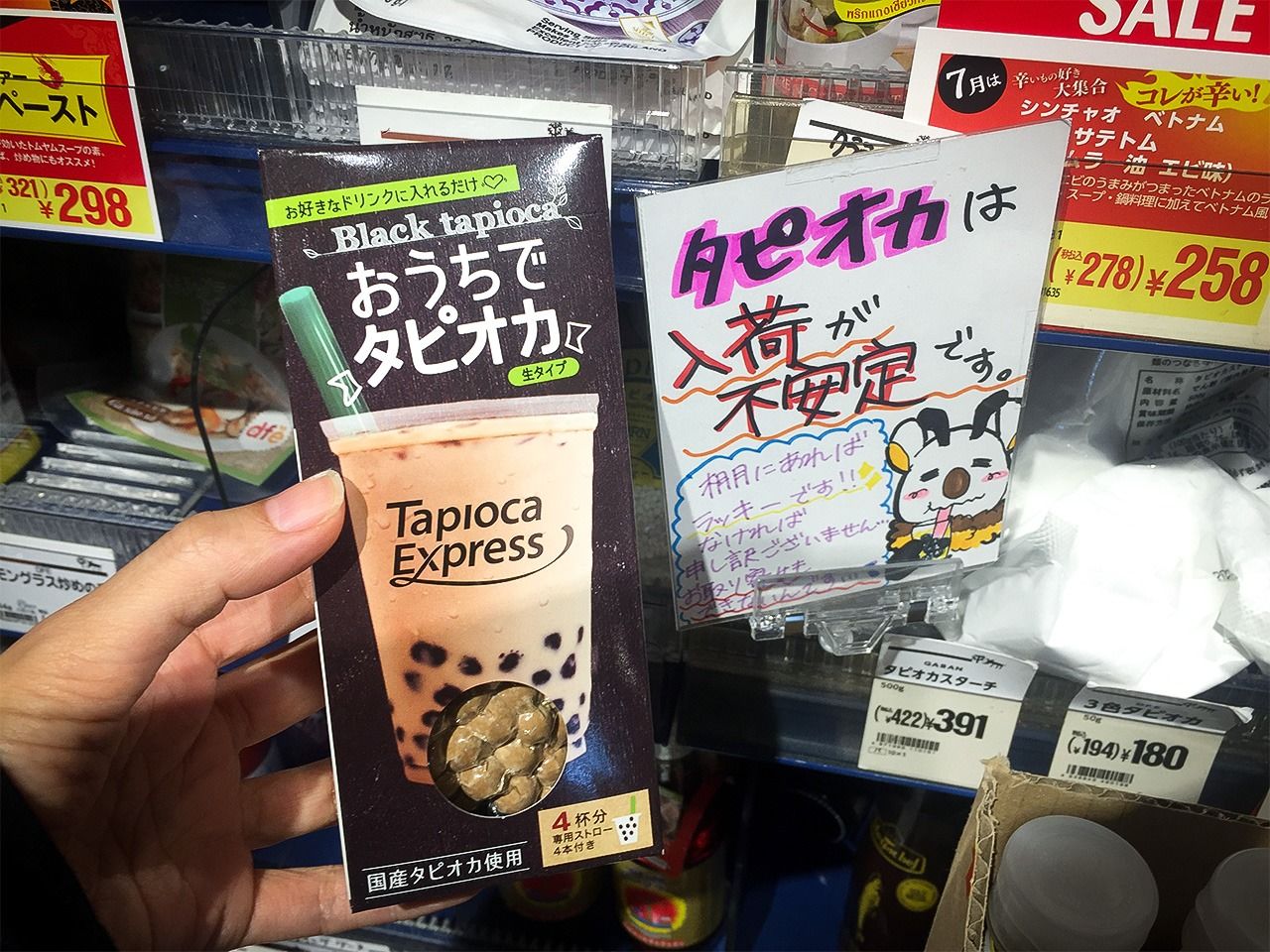 Tapioca pearls sold in a supermarket for making bubble tea at home.

To my mind, the popularity of tapioca drinks in Japan is largely a result of favorable views of Taiwan among Japanese. After the Great East Japan Earthquake in 2011, donations poured in from Taiwan. This stimulated Japan’s interest in its island neighbor to the southwest that continues to this day. There are certainly many Japanese who started drinking bubble tea after enjoying tapioca drinks during visits to Taiwan. However, local preferences are bound to change eventually, and to sustain the boom, businesses in Japan will need to develop new types of beverages especially for the Japanese market. 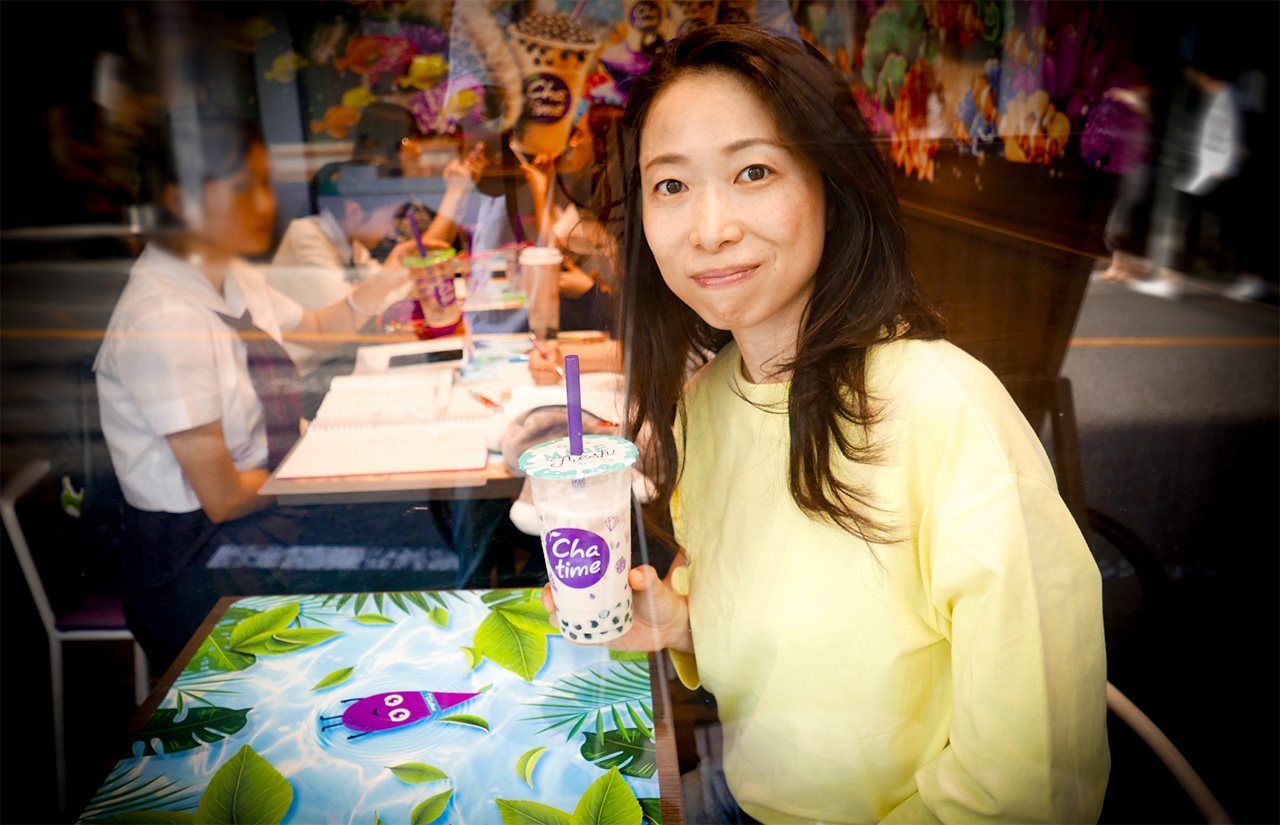 The author enjoying a tapioca drink in Japan from a well-known global chain.

Traditional Japanese confections—wagashi—often use starch derived from different types of roots or plants, and quite a few varieties contain glutinous rice flour that produces a soft, chewy texture. This makes me wonder if Japanese sweets could also become a popular topping. Personally, I would love to try a tapioca drink with a base of Japanese green tea or matcha latte.

While bubble tea originated in Taiwan, I found while conducting an informal survey that over half of tapioca drink shops in Japan are not Taiwanese businesses. Most stores in Japan now are former Taiwanese chains that were bought out by Korean conglomerates, or outlets operated by mainland Chinese or Japanese firms. Some major Taiwanese brands have made forays into the Japanese market, but have had to withdraw.

Taiwan still has plenty of shops serving delicious bubble tea, though, and the current boom in Japan offers opportunities for firms to establish a foothold in the country. Taiwanese food culture staples like pineapple cake and soup dumplings are favorites here now, and I hope bubble tea will join these as an accepted part of the Japan’s food scene.

(Originally published in Japanese. Banner photo: A group of students outside a bubble tea shop snap photos of their tapioca drinks. All photos by Hitoto Tae.)