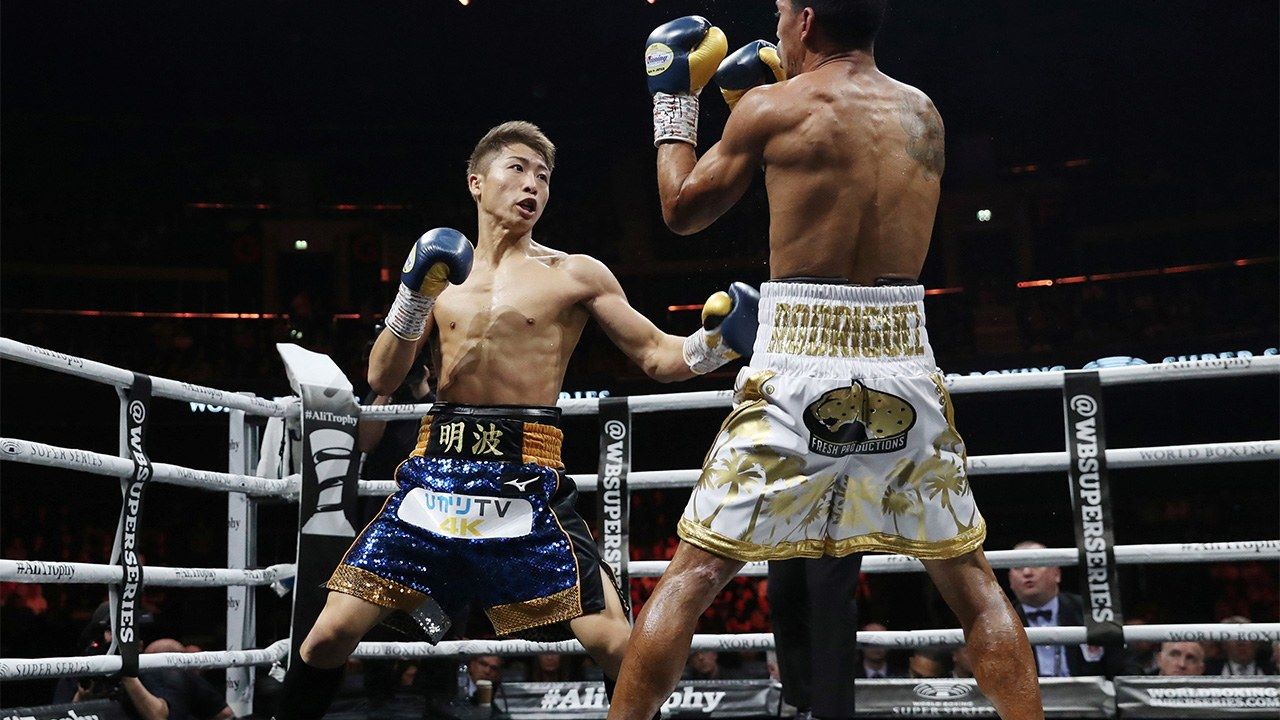 The “Monster” Shaking Up the World of Boxing

Sports Sep 30, 2019
Japanese boxer Inoue Naoya is on a winning streak, having won 18 straight bouts since turning professional. As his boxing attracts attention around the world, Inoue has his sights set on the title of undisputed bantamweight champion.

The career of ace professional boxer Inoue Naoya has been going from strength to strength. Inoue, nicknamed “The Monster,” currently holds the title of bantamweight world champion at both the World Boxing Association and the International Boxing Federation. As Inoue notches up knockout victories in international title matches, he is building a reputation both in Japan and overseas. Evidence of this may be seen in the pound-for-pound ratings published in the respected US boxing magazine The Ring: eliminating the distinctions between weight categories, the PFP ratings rank boxers from around the world and from all categories using a single metric. The fact that Inoue is ranked fourth in a pool that includes internationally renowned heavyweight and middleweight boxers is incredible—just consider how big a deal it would be to be the world’s fourth-seeded competitor in tennis or golf! While Japan has produced nearly 100 champion boxers since World War II, Inoue’s reputation sets him apart from his predecessors.

An All-Rounder with Perfect Execution

So, what makes “The Monster” such a good boxer? The force of his punches? His speed? His exceptional technique? The answer is “yes to all the above.” There are many types of boxer in the world: Inoue is an all-rounder who scores top marks in every category. This also means that his boxing style is extremely orthodox. Attacking with the “one-two” punch combination and relying on left-hand body blows, Inoue deflects his opponent’s attacks with a mixture of nimble footwork, upper-body maneuvers, and blocking. Inoue does not bring tricks or unusual ideas to the ring. Rather, his trademark is the extremely skillful execution of the fundamentals.

Let us hear what the experts have to say. The Monster is currently unbeaten after 18 bouts (16 of which were knockouts). Former WBC world champion bantamweight Yamanaka Shinsuke has this to say about Inoue’s ability to reliably throw knockout punches:

“Inoue is able to knock his opponents out with a straight punch, hook, or uppercut, delivered with either his left or right glove. Whatever the type of punch, Inoue can adopt the optimal pose for maximizing its intensity. In boxing you need to use footwork to maneuver, deliver successive punches, and avoid your opponent’s attacks, but every time you shift your weight, you become unbalanced. Normally, when a boxer is off balance, he can’t put his full weight into his punches. Inoue can, however, and that’s what makes him so special.”

Yamanaka defended the WBC title 12 consecutive times, the second longest defense streak for a Japanese boxer. As we can see, however, even this boxing legend is full of admiration for Inoue’s skills.

“When his opponent is on the offensive, Inoue deflects the attack with blocks and nimble back-steps. Then, the moment the other boxer pauses for breath, adjusts his stance, or draws back, Inoue goes on the offensive. Watching Inoue, you get the feeling that he knows exactly what the other person is trying to do, like a master of ancient martial arts,” says Ishii.

Does that make Inoue a genius? The answer from Inoue’s father and trainer Shingo is a definitive “no.”

“I think the people who call Naoya a ‘genius’ are only seeing the results of his training,” says Inoue Shingo.

“Naoya is no genius. I have simply given him the same advice repeatedly since he was just a boy. It was repeatedly working on his weaknesses, and repeatedly practicing his maneuvers, that made him what he is today.”

Inoue’s boxing career began at the age of six, when he saw his father Shingo practicing for an amateur tournament and asked to be allowed to box as well. Naoya was joined by his brother, Takuma.

Inoue’s father’s lessons consisted of exhaustive revision of the fundamental boxing combinations. As he notes, Inoue Shingo would make his son work on his weaknesses repeatedly until he had overcome them. These maneuvers include pulling back punches immediately after throwing them to get your gloves in position to defend against attack, and the delivery of a combination before changing position and preparing for your opponent’s next attack, while warding off counter-punches. In any sport, the correct execution of fundamental maneuvers is always a challenge. But Inoue not skimp on mastering the fundamentals; indeed, he took them to a higher level. Even now, as he holds the title of Japan’s top professional boxer, Inoue still revises these routine maneuvers repeatedly. It is this unwavering dedication that made Inoue the perfect all-rounder we know today. 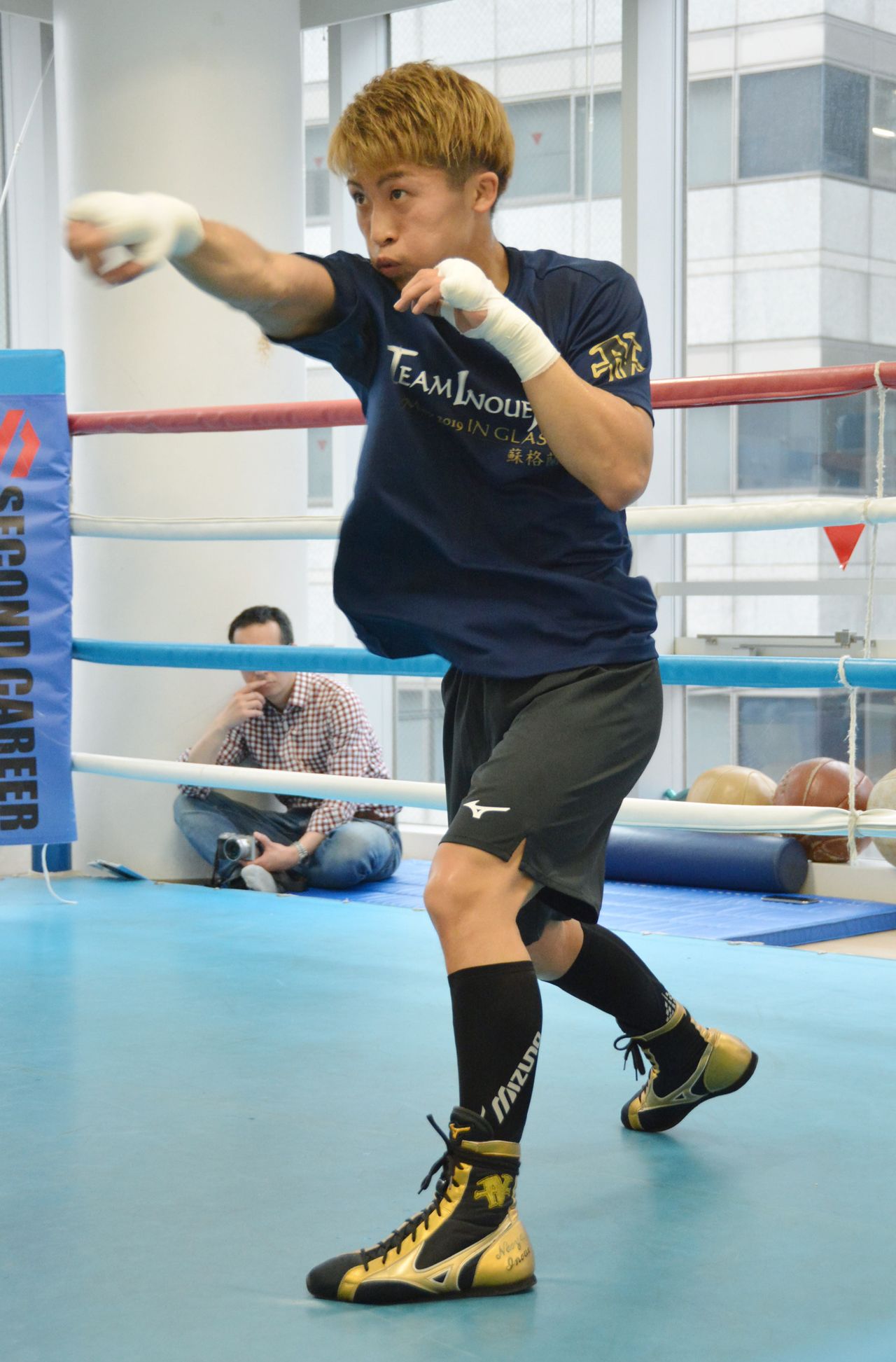 Inoue shadowboxes in May 2019 at the Ōhashi gym in Yokohama. (© Jiji)

Another reason for Inoue’s success appears to be the emphasis his father placed on his sons’ independence. Shingo has stated clearly that it never occurred to him to encourage his sons to take up boxing. For his part, Inoue says that he never felt forced into the sport by his father:

“I remember being shocked when I competed in my first tournament as a teenager to see other boxers being yelled at and slapped by their coaches. That would put you off boxing. You’d end up quitting,” reflects Inoue.

It was because Inoue chose boxing of his own volition that he was able to continue training under his father, no matter how strict the practice was, and to develop a love of the sport.

The Path to Uncontested World Champion

It was when Inoue started high school that the world began to learn of his abilities. Smashing through the competition in a string of unbroken victories in every Japanese tournament, as a high school senior Inoue was chosen to represent Japan in the adult (senior) division of the pinnacle of the amateur sport, the AIBA World Boxing Championships, held in 2011 in Baku, Azerbaijan. Inoue debuted as a professional boxer at the age of 18 with the nickname “The Monster.” After his fourth bout he was a Japanese champion, after his fifth bout he was an Asia-Pacific champion, and after his sixth bout he had won a world title—a record for a Japanese boxer. Inoue went onto score consecutive victories, winning titles in two, and then three, different weight divisions in record time, a feat that earned him a reputation as Japan’s best boxer ever.

Now 26, Inoue is currently competing in the World Boxing Super Series. The WBSS tournament aims to brings together champions from each of the four major belt accreditation organizations (the World Boxing Association, World Boxing Council, International Boxing Federation, and World Boxing Organization) in order to determine the uncontested world champion. Something of a boxing version of the soccer world cup, the WBSS enjoys popularity internationally, and is especially popular with Japanese fans.

Over 50 years ago, Japan enjoyed a golden age of boxing. With the subsequent emergence of new professional wrestling codes and the diversification of entertainment, however, boxing has gradually declined in popularity, and the recent proliferation of sanctioning bodies has resulted in more and more boxers being declared champions, thereby diluting the prominence of individual champs. Compounded by the financial woes of the broadcasters that buy the rights to broadcast tournaments, the outlook for the boxing industry had been dim. However, Inoue and the WBSS appear to have shaken up the stagnant world of boxing. Inoue, too, hopes to see the WBSS become a shot in the arm for boxing in Japan.

“All I can do is fight my best for my fans. With each successive knockout win, the expectations on me rise, so the pressure is something else. However, if someone asks me if I feel the heat, I just tell them that I thrive on pressure,” jokes Inoue. 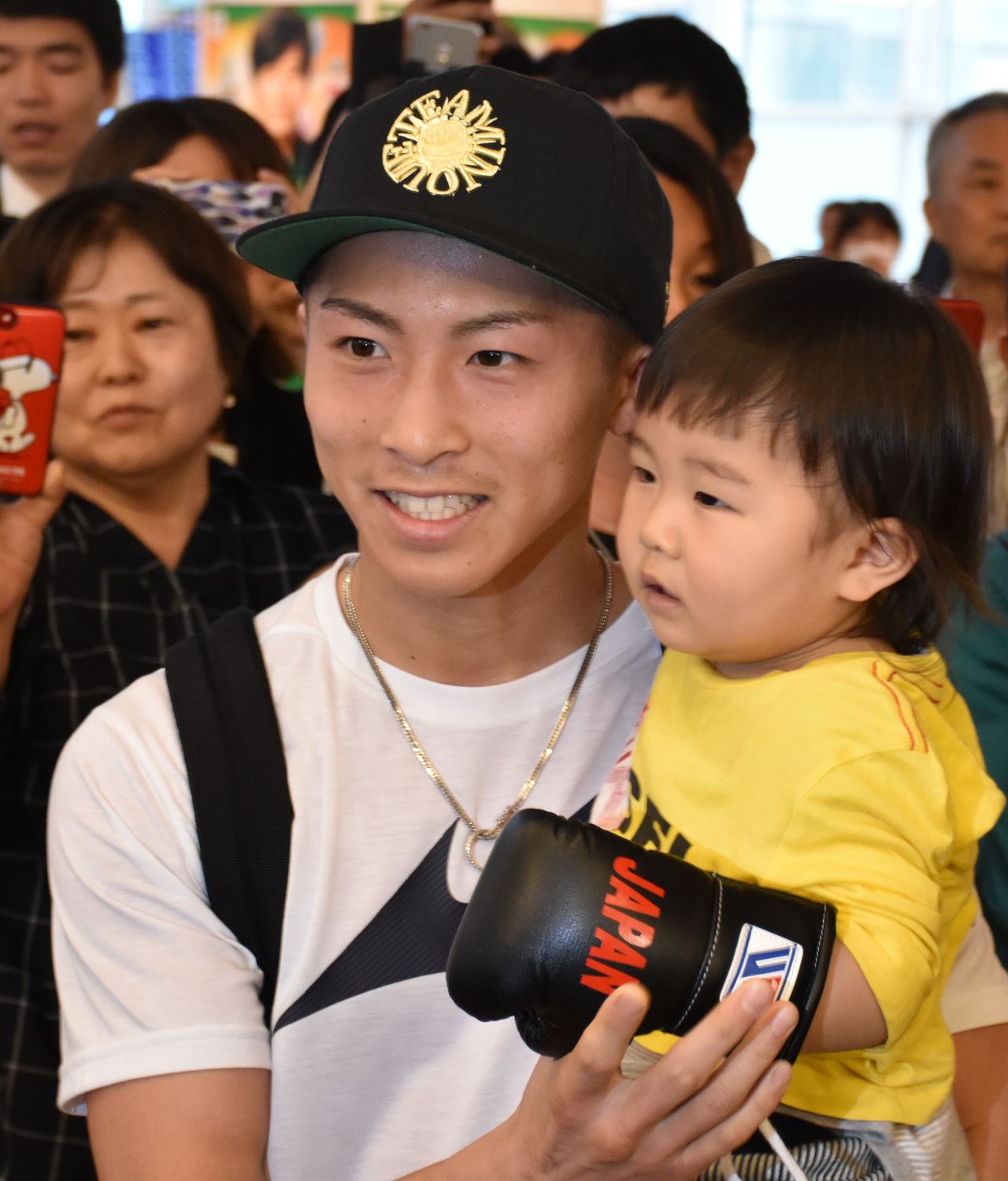 Inoue Naoya smiles for fans upon his victorious return to Tokyo’s Haneda Airport from the WBSS semifinals on May 21, 2019. (© Jiji)

In the WBSS bantamweight tournament semifinal in May 2019, Inoue scored a technical knockout victory over Emmanuel Rodriguez of Puerto Rico in the second round, in 1 minute and 19 seconds. Inoue will now go onto the WBSS final, scheduled for November 7 at the Saitama Super Arena just north of Tokyo, to fight Nonito Donaire of the Philippines. We look forward to another breathtaking performance from “The Monster.”