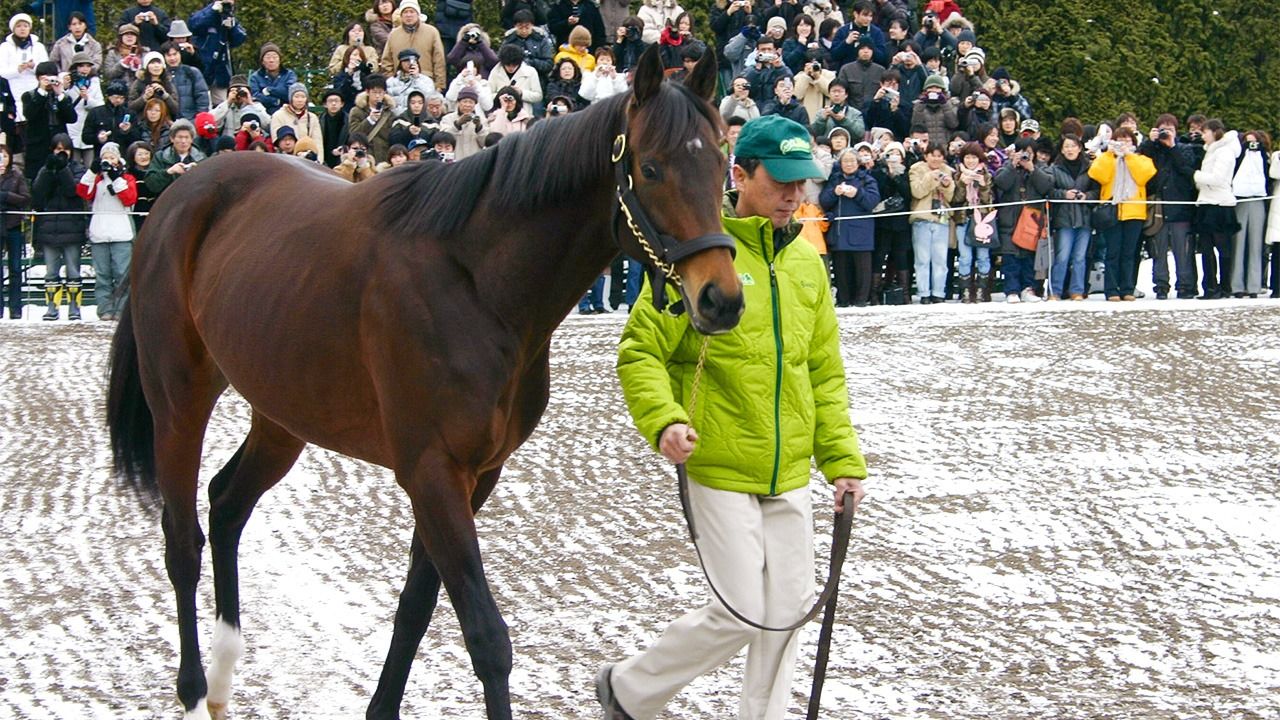 Sports Oct 3, 2019
On July 30, at 17 years of age, Deep Impact passed away following a cervical fracture. During his racing career, he was an undefeated Japanese Triple Crown winner and attained seven victories in Grade One (G1) races. In addition, following retirement from racing, he went on to become a breeding stallion of unprecedented achievements who redrew the thoroughbred pedigree chart. One reason for his success was said to be the exceptional posture he displayed during breeding. Below, a veteran horse-racing journalist writes about his interviews with stud personnel to discover the secrets behind Deep Impact’s fame.

This summer saw the untimely death of Japanese race horse Deep Impact, an event that sent shockwaves through the racing industry and received wide media coverage. His racing and breeding achievements are well-known (see below), but what of his performance as a sire whose occupation was mating? I caught a glimpse of the previously unreported inside story based on the testimony of staff closely associated with the facility where Deep Impact stood at stud, Shadai Stallion Station, in Abira, Hokkaidō.

Deep Impact was a horse very skilled at mating, according to the staff involved with this important task of his later career. In many cases, mating is a challenge for small-framed sires like he was, so there were some concerns when he first arrived at Shadai. The majority of broodmares he partnered with were taller than him, and typically with well-fleshed hindquarters, which required difficult angle-adjustment in order to align the genitals of the couple. In such situations, farm workers usually stack up some tatami mats for the stallion to stand on to adjust the height, but this can cause some stallions to have trouble focusing on the task at hand, as well as leading to accidents in some cases when the sire loses his balance.

The staff report having had no problems with Deep Impact, though. Specifically, he had good hip flexibility for mounting. For this reason, no matter how tall his partner, he was able to accommodate her smoothly. Actually, notes one farm worker, extending the hips in this way is extremely challenging for horses. To begin with, they need to have good flexibility. In order to extend at the hips, it is essential for all parts from the hock joint (the largest joint of the hind legs) to the tip of the hoof to be supple and to work in unison.

In addition, says the staff member, it is crucial that the horse have an exceptional sense of balance. Even humans find it difficult to balance on tip-toes for any length of time—and moreover, engaging in strenuous physical activity in such an unstable posture usually results in wobbly legs. Recently, “core training” has enjoyed a boom in the fitness world, and one secret to Deep Impact’s success was probably his firm core. Consequently, he never showed signs of tiredness.

In terms of technique, state the farm staff, he was probably the most adept sire they had seen since Northern Taste (1971–2004). The stud staff were also quite impressed in how such circumstances revealed the quality of his reflexes.

One remarkable aspect about Deep Impact, they explain, was that he was always extremely relaxed when he entered the mating area, but when the time came, he could instantly rise to the occasion just like a switch had been flicked. He was quite a playboy, they say, wasting neither energy nor time. He performed his business smoothly, and when he was done, he would exit as though nothing had happened. In this regard, he acted like a true professional.

Breeding is always accompanied by risks, but staff reminiscing about Deep Impact said they did not recall ever having any trouble. In this regard, he was also an outstanding achiever.

Born March 25, 2002; died July 30, 2019. His racing debut was in 2004, and in 2005, he became the sixth horse in Japanese racing history to win all the races of the Japanese Chūō Keiba (Central Horse Racing) Triple Crown (the Satsuki Shō, Tokyo Yūshun, and Kikuka Shō). He was only the second horse to do this while maintaining an undefeated record since Symboli Rudolf, who achieved this feat in 1984. Deep Impact became the first Japan-trained horse to rank number one in the world, in turf and long distance, in 2006. That year, he also raced in the Prix de l’Arc de Triomphe, in France, finishing third, but was later disqualified after testing positive for a prohibited substance. This occasion and the 2005 Arima Kinen were the only races where he was defeated. Consequently, his race record was 12 victories in 14 races (with one second place and one disqualification), including 7 victories in G1 races on his home turf in Japan.


His prize earnings exceeded ¥1.45 billion. His grand finale was a victory in the 2006 Arima Kinen. In 2007, he began working as a stallion. After 2012, he was the leading sire (highest earning stallion) for seven consecutive years; his stud fee climbed as high as ¥40 million in 2018. Among his celebrated offspring are five derby horses, including Kizuna, Makahiki, and Wagnerian, as well as Gentildonna, who scored seven G1 victories, and Fierement, who won the 2018 Kikuka Shō and the spring 2019 Tennō Shō. He was the fourth stallion to completely dominate Japan’s eight top races (the classic five, the spring and fall Tennō Shō, and the Arima Kinen). As of the end of 2018, his progeny have realized 1,797 wins in Japan’s Chūō Keiba races, for total prize earnings exceeding ¥47.14 billion.

(Originally published in Japanese. Banner photo: After retiring from Chūō Keiba, Deep Impact stood as a sire at the Shadai Stallion Station in Abira, Hokkaidō. This photo, taken on February 14, 2007, was his first public appearance in two months. © Jiji.)