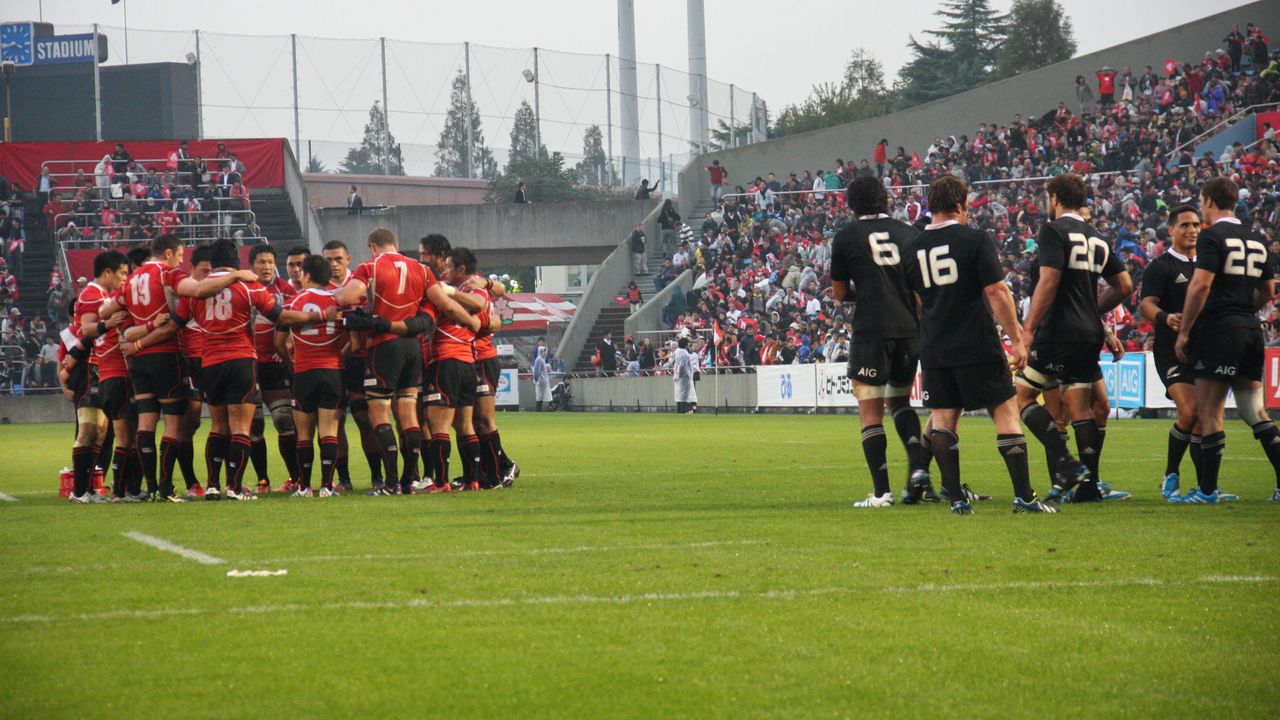 Wayne Smith—the director of rugby for the Kobelco Steelers Kobe Steel Rugby Club, who led the club to top league victory in the 2018–2019 season for their first win in 15 years—is sincere when he says “I love Japanese rugby.” 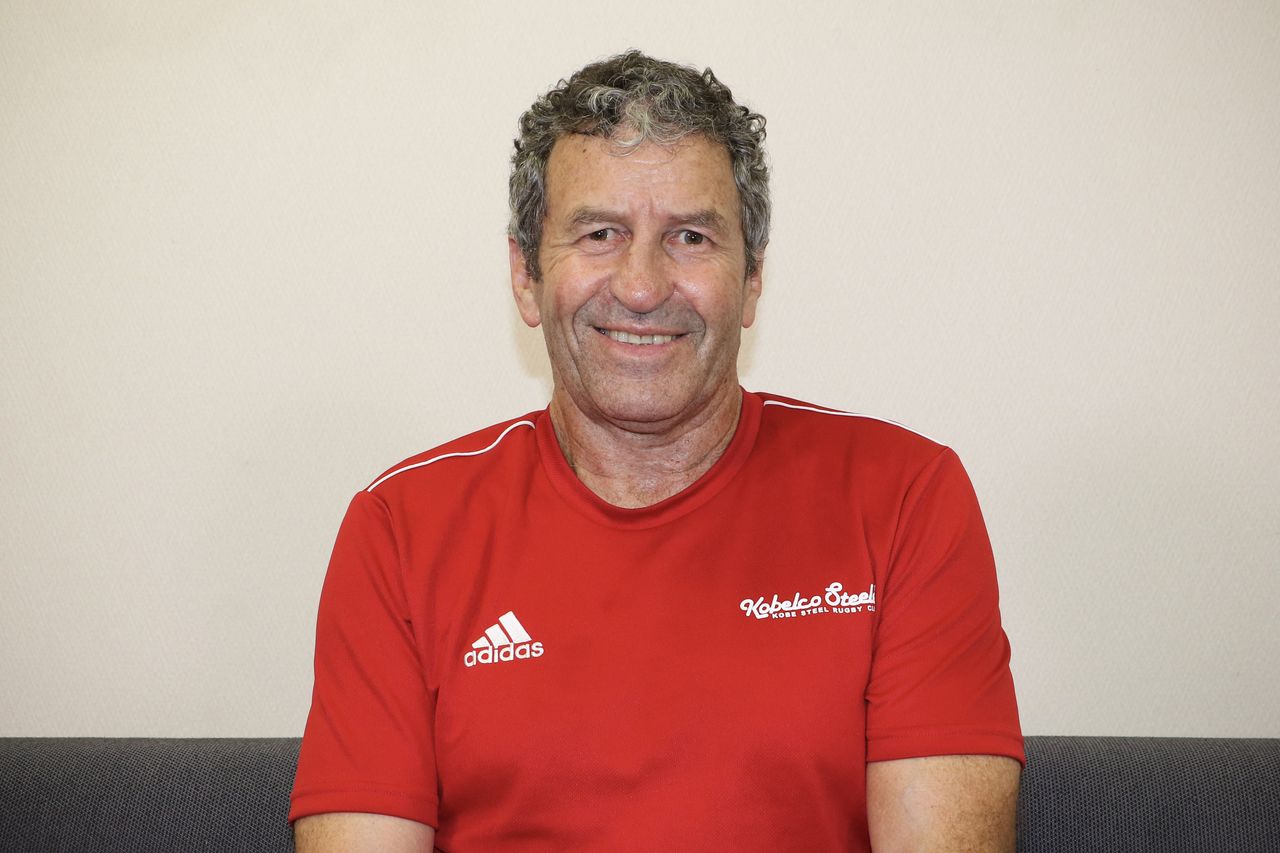 Wayne Smith, 62, director of rugby for the Kobelco Steelers.

The New Zealander Smith, who played for the All Blacks, has been the backbone of the sport in his native country. As head coach of the Canterbury Crusaders, he turned the team into perennial winners, including leading them to three consecutive titles, in the Super 12 league, known today as Super Rugby. After the end of his playing career with the All Blacks, he directed that team as assistant coach, selector, and head coach for nearly 20 years, starting in 2000.

Smith relates that Japanese rugby has captivated him since childhood, when Japanese player Sakata Yoshihiro, known as “Demi,” played in Canterbury, Smith’s hometown, in the 1960s. He was awed by Sakata’s plays on the field and asserts that Sakata introduced the Japanese style of rugby to New Zealand. That experience instilled in him profound respect for Japanese rugby.

Innovative Plays on the Field

The Japanese national team, touring New Zealand in 1968, made a searing impression on the young Smith. The following year, Sakata stayed behind in Canterbury and dazzled the crowds with his many innovative plays.

Take the line-out, for example. When the ball falls outside the touch line, play is usually restarted by having the forwards, seven a side, face off to gain possession of the ball. But the shorter Japanese players had little chance of prevailing against their taller opponents. To get around this disadvantage, national team coach Ōnishi Tetsunosuke devised the short line-out to compensate for his players’ short stature when they faced the much taller Kiwi players.

Ōnishi consulted the rulebook, which stated that the ball should be thrown into the center of a line of two or more players. To give his players more space to move around, he decided to send in the minimum two players. Banking on their speed and agility, he had the thrower sync moves with his teammate, who would move back and forth to throw his opponents off the mark and enable him to grab the ball and run, setting the stage for an attack with a bigger group of players.

Another well-known innovation in Japanese rugby is the kanpei. In this play, fullbacks, who usually play defense, move up into the backs’ line, where they can divert the defense’s attention and break through to advance downfield. This play, devised by Ōnishi when he coached the Waseda University team, was developed at the suggestion of fullback Nakamura Sadao 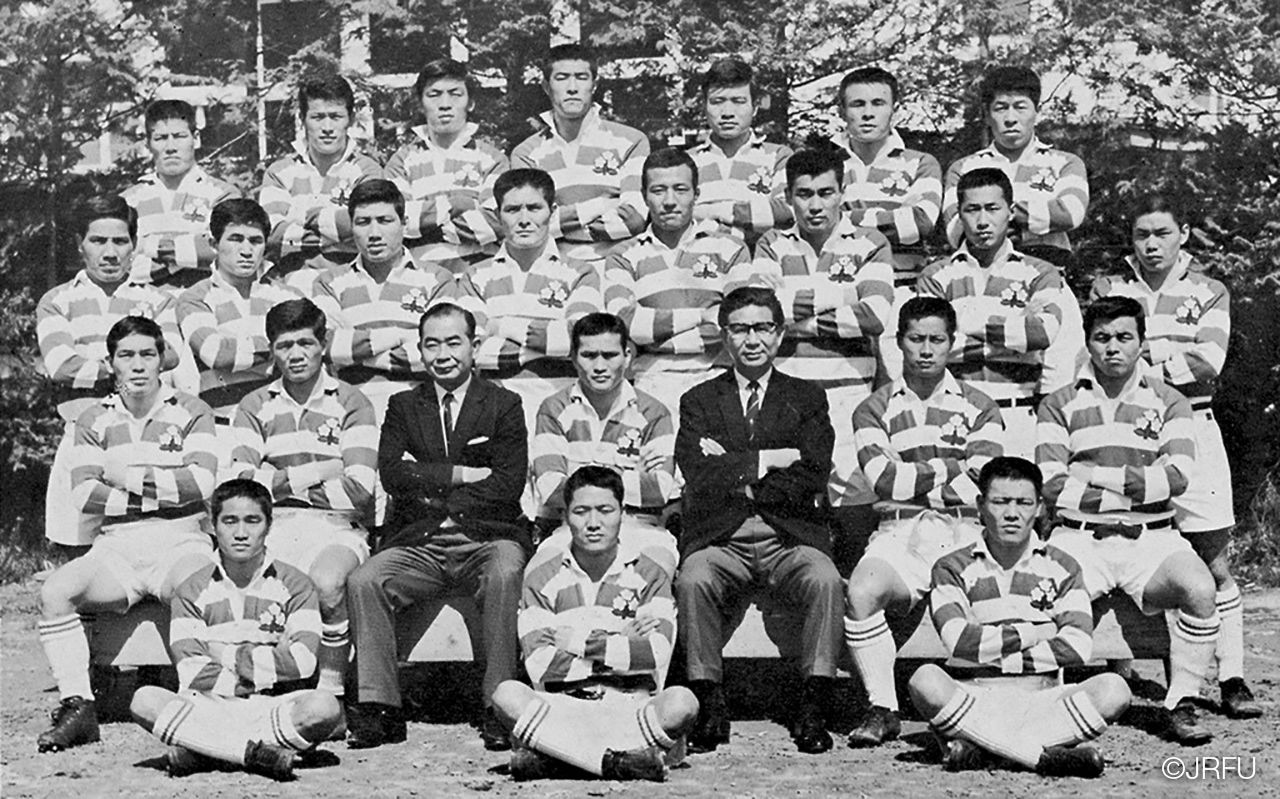 The Japanese national team that played against the All Blacks Jr. in 1968 in New Zealand. Sakata Yoshihiro is on the far left in the second row. (Photo courtesy of Japan Rugby Football Union)

These distinctive home-grown moves by the Japanese team in New Zealand greatly impressed Smith and helped the team conquer their formidable opponent. He recalls being amazed at the inventive Japanese moves that played to the team’s strengths and contributed to their win.

How did Japan, far removed from the rugby mainstream, succeed in creating a distinctive rugby culture? It hasn’t been all a matter of tactics and techniques: The corporate sport system has helped a great deal too. Rugby coaches from abroad view this system as a superb innovation and believe it contributes to Japanese teams’ strong showing on the international stage.

In the European and southern hemisphere countries where the game is played, rugby grew out of local clubs into organized competition. In Japan, meanwhile, rugby established a foothold mainly through schools and corporations. Although regionally based rugby clubs abroad have an advantage in that they can attract players from diverse age groups who share and pass on knowledge and skills, many coaches from rugby legacy countries are highly impressed by Japan’s corporate sports system. 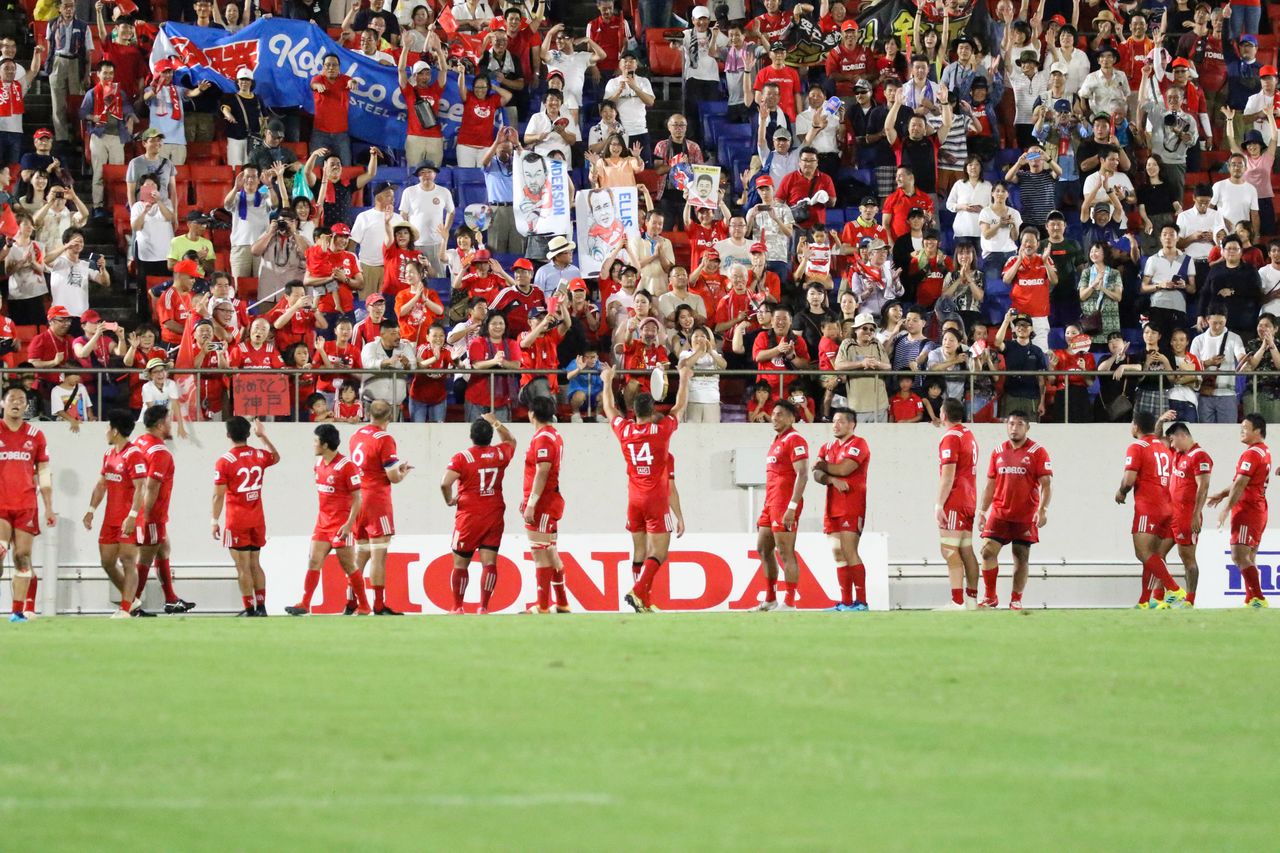 The Kobelco Steelers team thank their supporters after defeating the Suntory Sungoliath to win the top league championship in December 2018.

Rugby had long been played purely on an amateur basis, but in 1995 the sport’s international governing body, now called World Rugby, altered its code to allow for professional players, after which many rugby legacy countries began fielding pro teams. But rugby as a professional sport has a much shorter history than soccer, baseball, tennis, or golf and faces many hurdles to becoming a money-making enterprise.

For one thing, teams are made up of a large number of players, which means considerable outlays for salaries and travel. Another factor is that games are very long, and taking account of the physical wear and tear on players, scheduling more games is impractical. This in turn limits ticket sale revenue.

Japan’s corporate sport model, where players are hired as company employees, offers a workaround. The players spend their younger years on the sports field, their office hours adjusted to give them time to practice. Off the field, they learn the ropes of a corporate job in preparation for working life after retiring as active players.

In reality, however, it’s not as easy as it sounds. The higher the level of play, the more difficult it becomes for players to find time to do their office jobs. In recent years, many players have become de facto full-time athletes. There is a real risk that trying to be both a corporate worker and an elite athlete at once can result in excelling at neither undertaking. On the other hand, the human relationships and teamwork forged through rugby and the experience of winning after facing tough odds can often serve retired players in good stead in the business world.

The Pinnacle of Student Rugby

Another distinctive stream nurturing Japanese rugby is school sports clubs. Hanazono Rugby Stadium, located in the city of Higashiōsaka and site of the national high school rugby championships, epitomizes how the game is played by Japanese youths.

That is not to say that high school rugby is problem-free. Often-cited issues include the tight match schedule and the “win at all costs” mindset that Hanazono is said to encourage. But one distinctive rule followed at Hanazono is the 1.5-meter scrum. To prevent serious injury, scrums are allowed to advance only this short distance. Some claim that this rule, which also applies to under-15 players, hampers development of world-class forwards, but it has helped foster the evolution of the Japanese playing style. 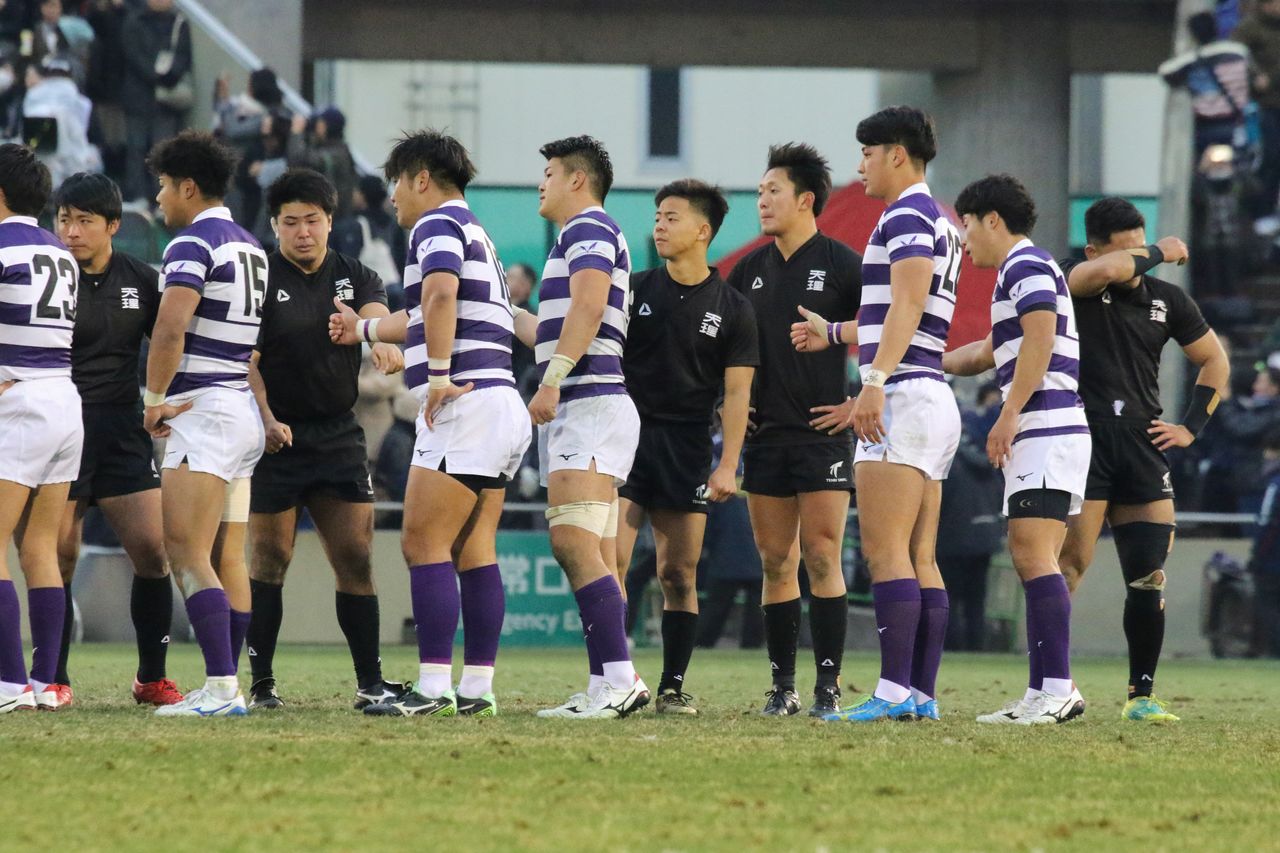 Players exchange a post-game “three cheers” at the university rugby finals between Meiji University and Tenri University in January 2019.

Rugby at the university level is also a school club sport that has long rivaled corporate rugby in popularity. It has developed distinctive rituals, such as the raised-thumb “three cheers.” After the final whistle, players from both teams line up in the middle of the field and face each other to exchange the gesture in recognition of having given their best effort to the match just concluded. In contrast to freely exchanged handshakes, the sight of players in a neat row acknowledging each other’s prowess gladdens the hearts of Japanese rugby fans.

That is not something you would see in matches outside of Japan, where players simply shake hands with whichever opposing team member happens to be closest by. It’s like magic, really, that the final whistle can transform fierce combatants into brothers in arms expressing mutual respect for the time and energy they have all just expended on the field.

This contrast—the Japanese following established form versus the more ad hoc approach of legacy country players—in expressing respect is another manifestation of Japanese rugby culture. I think that World Cup spectators will find it interesting to observe the different postgame rituals of the various countries’ teams.

(Originally published in Japanese. Banner photo: Although the pregame circle is not a trait unique to Japanese rugby culture, the players show a distinctive style that contrasts with that of the New Zealand All Blacks on the field in January 2013. All photos by Ōtomo Nobuhiko except where otherwise stated)