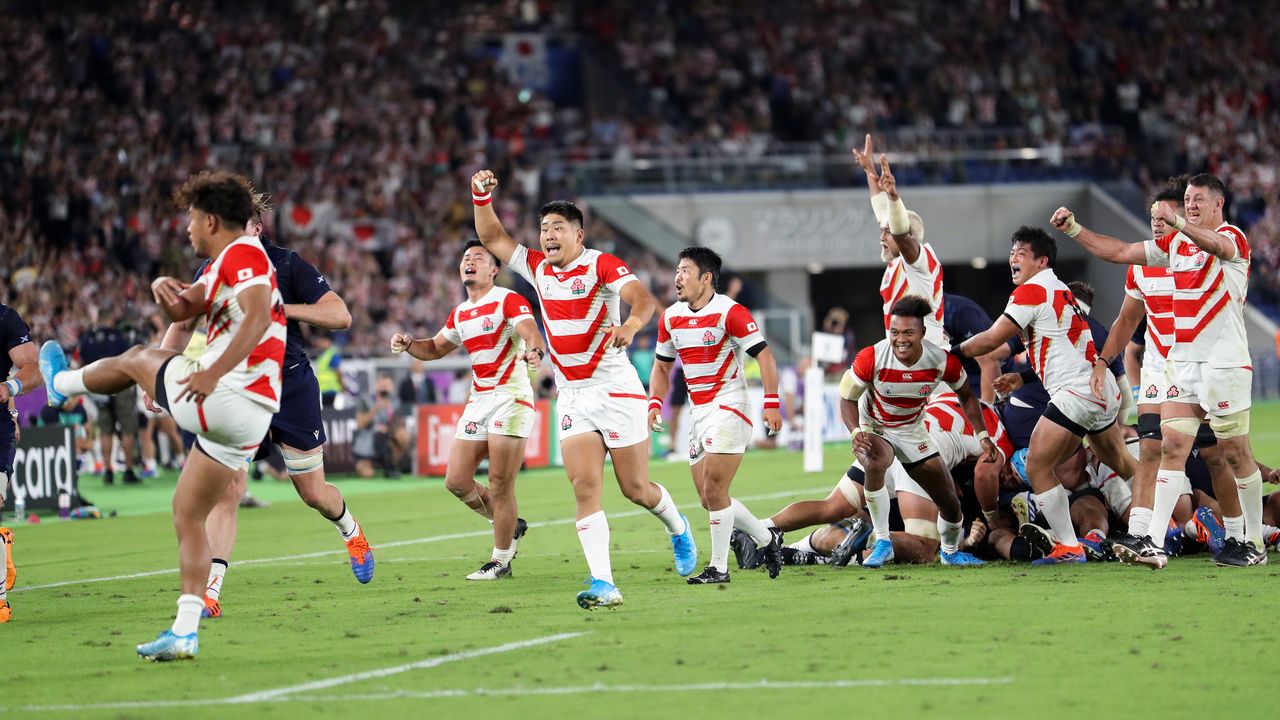 An Undefeated Japan in the Final Eight: Reviewing the Wins and Looking Ahead

Sports Oct 18, 2019
Japan’s Brave Blossoms came out on top of Pool A in the 2019 Rugby World Cup with an undefeated record. A look back on the home team’s hard-fought victories so far. Can Japan keep the momentum going?

When did Japan’s national rugby team get this strong? There must be many people in Japan—and all around the world—asking themselves this question now.

The Brave Blossoms have gone on to the Rugby World Cup quarterfinal round for the first time in tournament history. With an undefeated record in the pool stage, it sounds like they did so easily, but there were tough challenges and serious pressure to overcome behind the scenes. 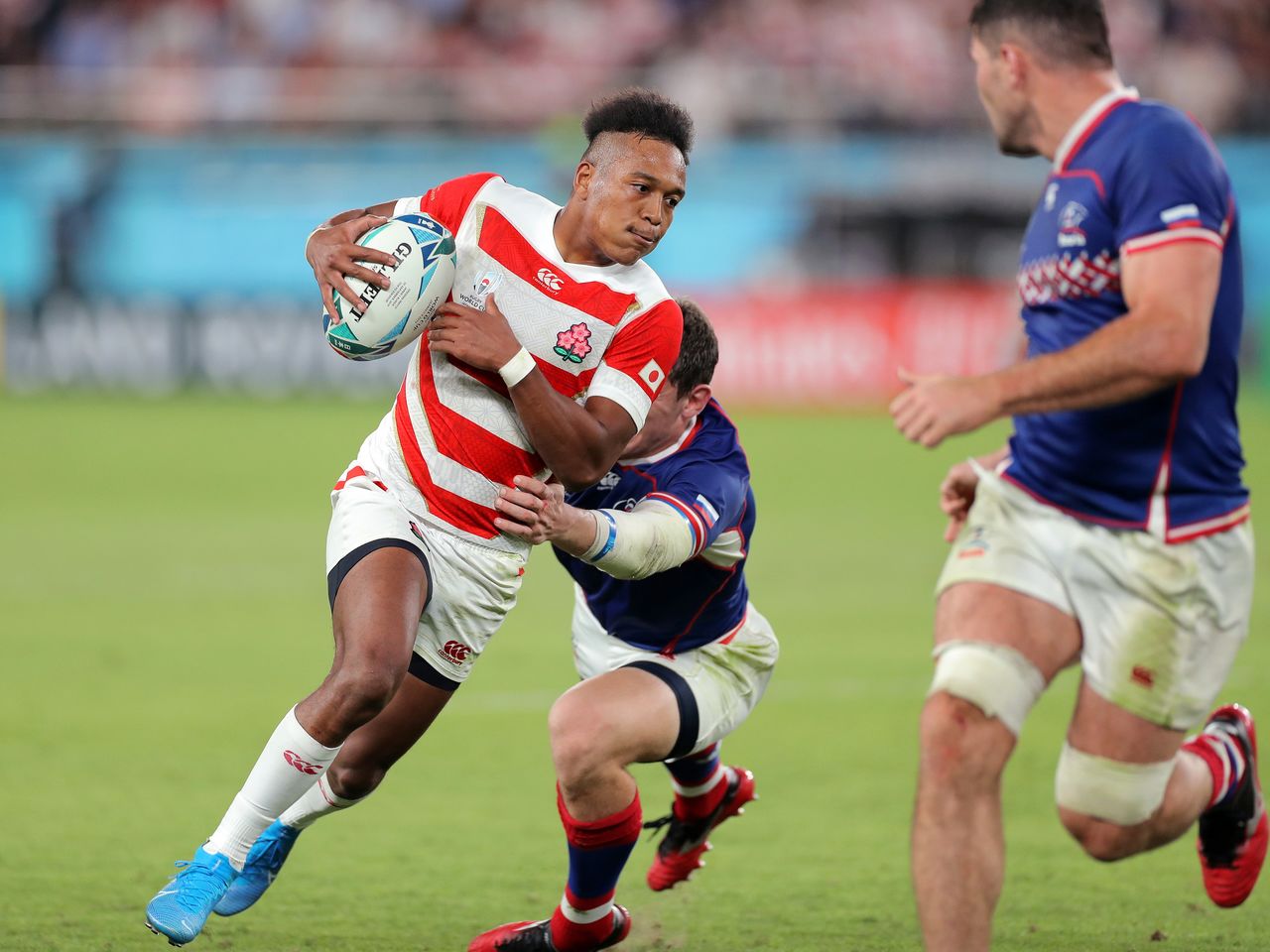 Matsushima Kōtarō put his speed to good use in the September 20 match against Russia at Tokyo Stadium, scoring a hat trick. (© Jiji)

The tournament kicked off on September 20, when the host nation faced off against Russia. In addition to the Russians, the Japanese players faced another opponent: an incredible level of tension.

Nerves were on display as right away Japan found themselves in trouble near their own goal line after captain and flanker Michael Leitch failed to get a grip on the ball following Russia’s kickoff. Just 4 minutes into the game, Japan’s William Tupou flubbed the reception of another Russian kick, and Kirill Golosnitskiy marked the first try of the match.

It would not take long, however, for Japan to equalize. Wing Matsushima Kōtarō, also a factor in the 2015 World Cup hosted by England, lifted the spirits of the crowd and took much of the tension off of the Japanese squad’s shoulders with his first try of the tournament 11 minutes into the first half. Matsushima added to his total with another try at 38 minutes and a third at 28 minutes into the second half, completing his hat trick. A rough start gave way to a blowout victory for Japan, which won its first match 30–10 to gain 5 points in Pool A competition.

A Bold Plan: Bench the Captain 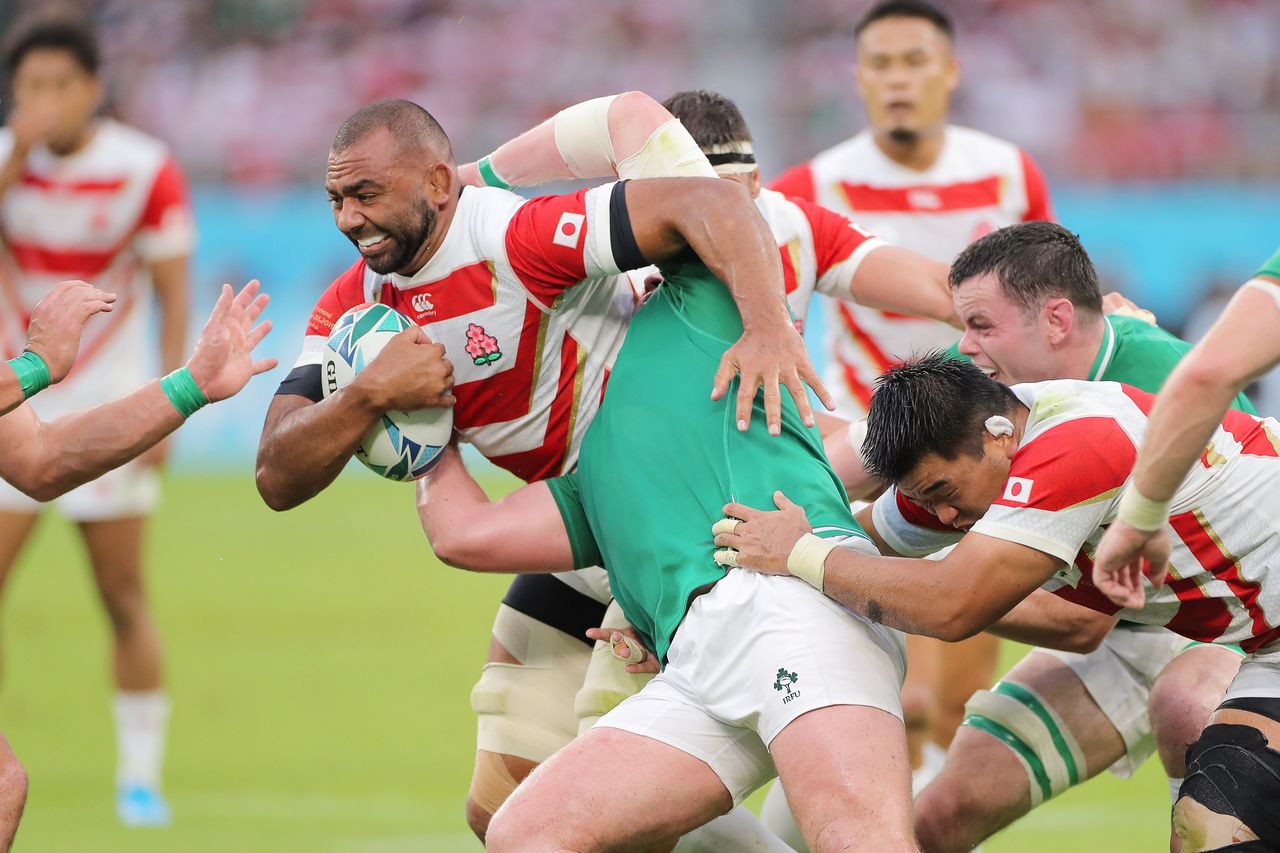 Captain Michael Leitch, with ball, came off the bench against Ireland to give his team a burst of energy. Taken on September 28 in Shizuoka. (© Jiji)

Japan’s second match, on September 28, was against a fearsome Ireland team—ranked number one in the world just before the World Cup began, and coming off of a 27–3 drubbing of Scotland in its tournament opener.

Japan skipper Jamie Joseph began the game with a bold decision: to keep Michael Leitch, the team’s captain and mood-maker, on the bench at the starting whistle. He based this ploy in part on Leitch’s disappointing performance in the Russia match, but his main aim was to unleash him later in the game, when his power would be needed most.

Ireland struck first, scoring two tries to go up 12–3 early in the match. It seemed like the Irish were too much for the Brave Blossoms to handle after all—but things turned around quickly when Leitch took the field at the 30-minute mark. He advanced relentlessly down the pitch each time he got his hands on the ball; when the ball was in the opponents’ hands he was ferocious with his tackles, delivered one after another as he popped up from the ground again and again. During the captain’s first 8 minutes back on the field, a reenergized Japan put fly wing Tamura Yū in position to kick two penalty goals, bringing the team back into striking distance at 9 points to Ireland’s 12. At 19 minutes into the second half, wing Fukuoka Kenki, also coming in from the bench, put the home team ahead for the first time with a try; at 31 minutes in the second half, another Tamura kick made the score 19–12 in Japan’s favor, where it would stay until the final whistle.

An Overtime Try for a Bonus Point 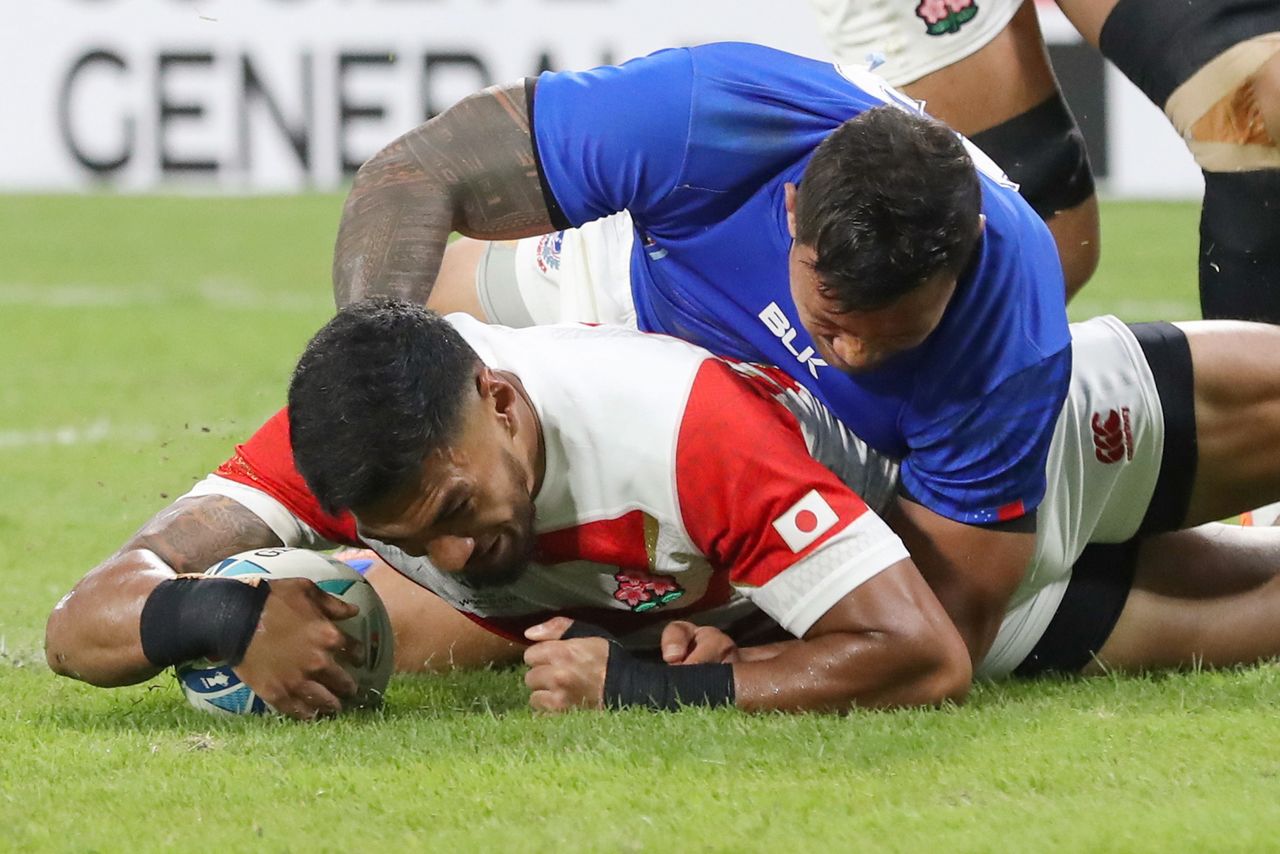 Japan’s third match, against Samoa, saw the team unable to find its rhythm early on. The first quarter was a storm of penalty kicks, with Japan scoring three to Samoa’s pair to put the score at 9–6. In minute 27, Japan got its first try with a Leitch tackle winning the ball and Timothy Lafaele carrying it across the line. This try by Lafaele, a Japanese national who was born in Samoa, inspired Japan to pick up the pace of its attack.

Thirteen minutes into the second half, number eight forward Himeno Kazuki scored a brilliant try. His was followed in minute 35 by another from Fukuoka and in overtime, at minute 44, by a dramatic Matsushima Kōtarō score that won Japan a tournament bonus point for its fourth try of the game. With a total of 14 points racked up in three victories in pool play, Japan was within reach of a ticket to the quarterfinals for the first time in team history. 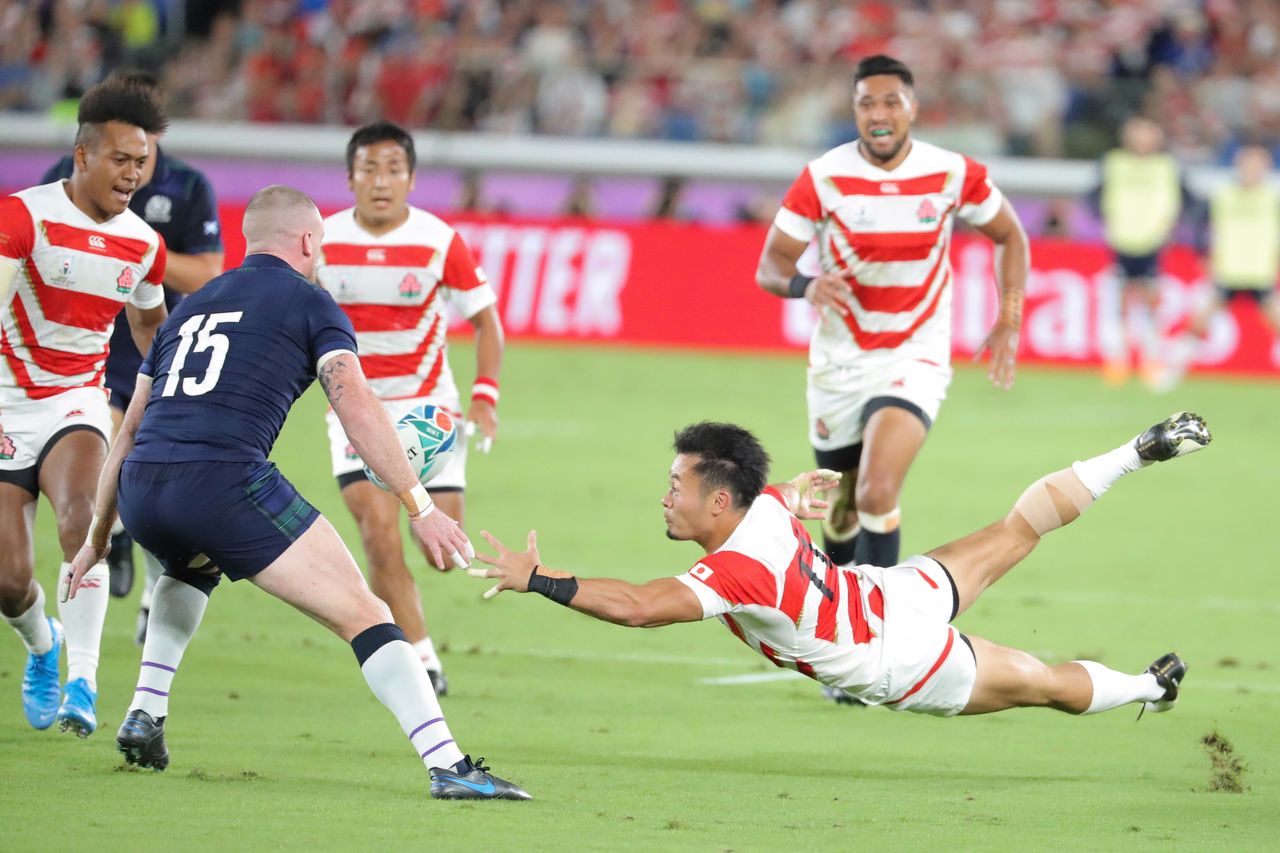 Fukuoka Kenki delivers an acrobatic offload pass to Matsushima, who carries it past the line for Japan’s first try against Scotland on October 13 in Yokohama. (© Jiji)

Japan’s final Pool A match was against Scotland, the team that defeated the Brave Blossoms in 2015 and sent them crashing out at the group stage despite winning all three of their other matches. Japan looked to be in for another rough ride in 2019 when Scotland notched its first try just 6 minutes in.

Japan didn’t roll over so easily, though. At 17 minutes, a series of passes at midfield put the ball in Fukuoka’s hands; thrown off balance by a tackle, he managed to offload to Matsushima, who dashed downfield for Japan’s first try. Tamura kicked the conversion, and the game was even at 7–7.

All momentum was now with the Japanese. The Brave Blossoms racked up two more tries—one by Inagaki Keita at the end of a dazzling series of offload passes and another from Fukuoka, who gathered a grubber kick from Lafaele and outran all pursuers to put the ball down. Ahead 21–7 at the end of the first half of play, Japan picked up where it left off when play resumed as Fukuoka snatched the ball away from an opponent at midfield and carried it in for Japan’s fourth try of the game and his fifth of the tournament. Leading 28–7, Japan appeared unassailable.

Scotland was not ready to give up yet, though. Two quick tries, at 9 minutes and 14 minutes into the half, put the team back in the game—although not in a likely position to advance to the quarterfinals, which would require them to win by at least 8 points. A dogged Japanese defense prevented the Scots from scoring again, and the clock ticked out on a 28–21 win for the hosts. The Brave Blossoms finished undefeated in pool play to go on to the round of eight for the first time ever. 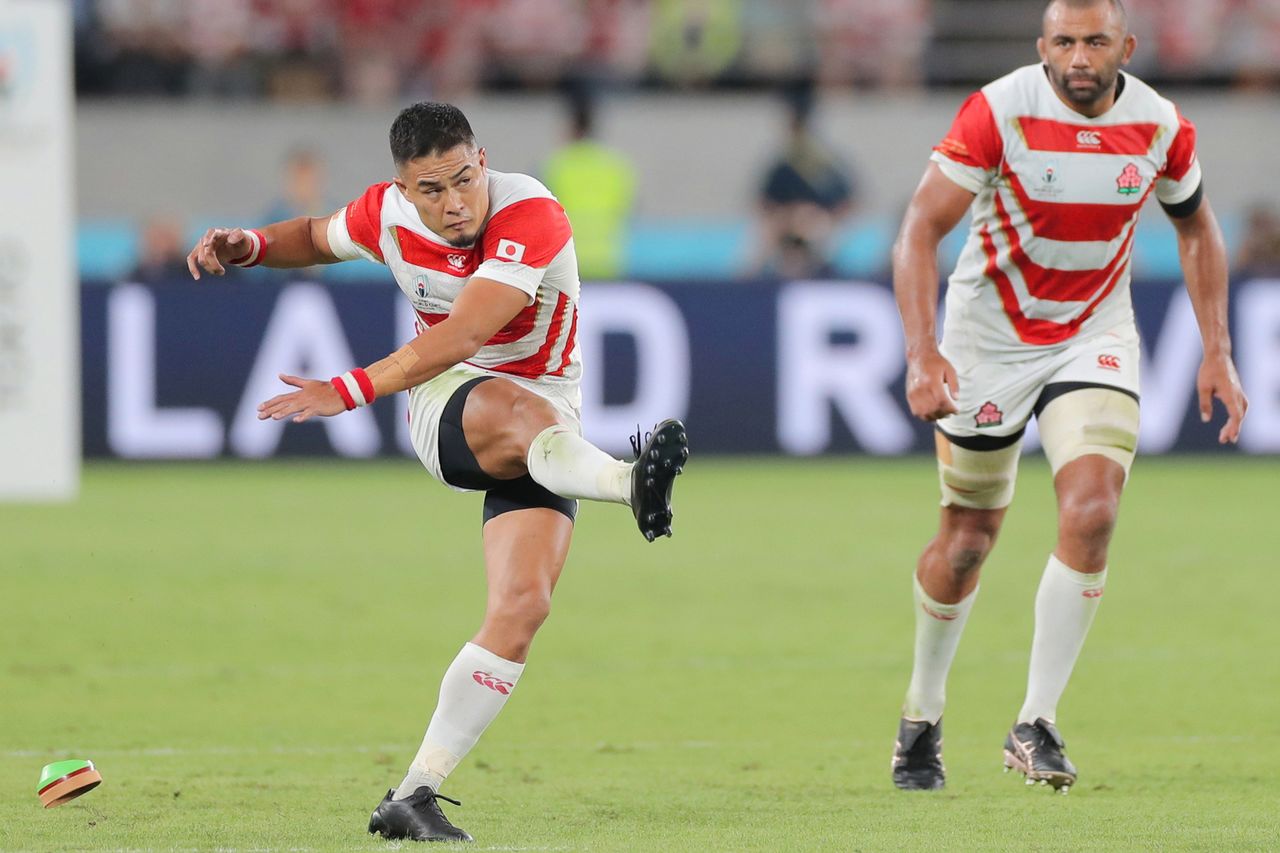 Tamura Yū, the tournament’s top scorer in pool-stage play, will be one player to watch in the upcoming match against South Africa. (© Jiji)

“This game wasn’t one we played just for ourselves,” said Michael Leitch after the match, which took place just a day after the powerful Typhoon Hagibis brought torrential rainfall and flooding to swaths of central and eastern Japan.

“There are many people out there suffering from the typhoon. In preparing for the game today, lots of people were out there with sponges, soaking up rainwater and wiping down all the floors and seats in the stadium. We told ourselves that playing on a day like today is something we needed to do for the people of Japan.”

He had one more thing to say: “We’re in an uncharted territory from here on out.”

Japan’s quarterfinal opponent is South Africa. Four years ago, Japan scored a try in the closing seconds of its pool match against the Springboks to defeat the heavily favored South Africans 34–32. This was hailed as one of the greatest upsets in the sport’s history.

The Boks are no less dangerous this time around. Despite losing to New Zealand in their opener and coming in second place in Pool B, they racked up an impressive 27 tries in their four group games, more than any other team in the tournament.

From here on out, though, the total number of tries in a game and tournament bonus points are no longer factors. The only goal the final eight teams have is to outscore their opponents and make it to the next match. Tamura Yū, who amassed a tournament-leading 48 points in Japan’s four pool games (9 conversions and 10 penalty kicks), will be a key figure to watch when the Brave Blossoms take the field against South Africa on Sunday, October 20.

(Originally written in Japanese. Banner photo: The Brave Blossoms celebrate their victory over Scotland in Yokohama on October 13, 2019. © Jiji.)