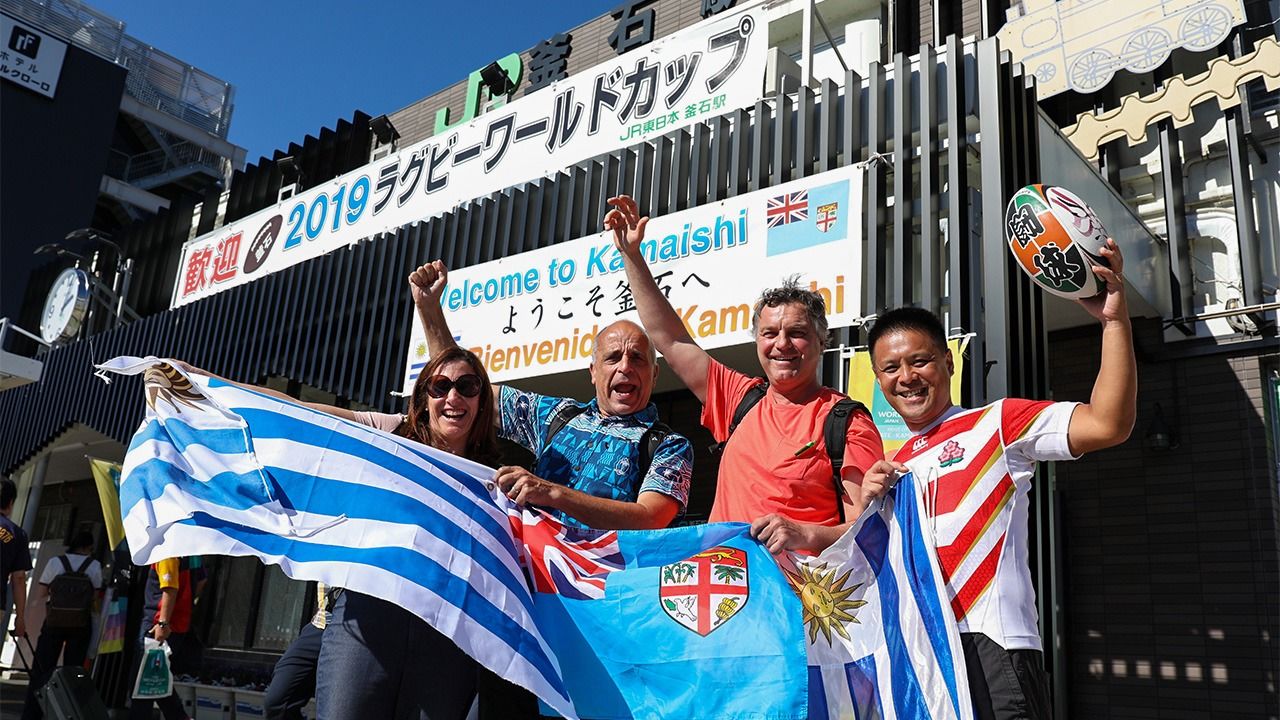 Sports Oct 28, 2019
Japan’s unexpectedly successful run in the Rugby World Cup ended with a quarterfinal loss to South Africa, but the Brave Blossoms—and the host country as a whole—have much to build on going forward. A veteran British journalist looks at what Japanese rugby has achieved.

Game of the Heart

Football fans like to call football “the beautiful game,” but rugby is truly a game of the heart. That’s because of the raw display of physical courage—sheer guts—by the players as they slide through the mud in the ruck, pile up in writhing heaps of bodies, and collide head-on like giant stags wrestling for a few inches of ground. It’s also about the way the fans’ hearts pound with exhilaration as a winger or scrum half breaks through the opponents’ lines and dives for the try line.

And the Japanese have won the hearts of sports fans around the world with their exuberance, warm hospitality, and good-natured shows of sportsmanship. That sentiment has been voiced many times in international TV and press commentaries. And the praise was only reinforced after Japan’s phenomenal success in the first four weeks of the tournament was finally snuffed out by a crushing defeat by the superior power of the Springboks on Sunday, October 13.

As a society Japan has long been reluctant to integrate people of other ethnicities, but the multi-ethnic Brave Blossoms team has emerged as a symbol of a different Japan, which has made national heroes out of every member of the squad. I was struck by the impact of the great invasion by so many foreign fans on the consciousness of ordinary Japanese people—including a Japanese woman interviewed in the street for British TV: “Some minority communities in Japan have long suffered from discrimination that no one talked about,” she said. “But having people like Michael Leitch playing for Japan at rugby gives those people courage to speak out.”

It has felt at times this autumn as if a love affair has blossomed between Japan and an outside world that its people often prefer to keep at arm’s length. Fifty million Japanese watching the big matches together on TV is a statistic that speaks for itself. And thousands of visitors from far away have marvelled at Japan’s rubbish-free streets, the clockwork efficiency of the country’s transport networks, and the natural courtesy of the Japanese as hosts of a great festival of sport.

The whole world shared the nation’s grief after typhoon Hagibis destroyed landscapes and lives. And TV viewers everywhere were moved to see Japanese fans singing the South African national anthem before that crucial quarterfinal match, and clapping the winning side off the pitch despite their own heartache, disappointment, and tears as the dream came to an abrupt end.

Inspiring Play from the Brave Blossoms

The biggest surprise has been the inventiveness, vitality, and skill that the home team displayed on the rugby pitch—their speed of play, flexibility, and near-perfect ball handling—and the character they displayed at critical moments in their magnificent wins against Ireland and Scotland. Their near-magical close passing technique drew admiring comparisons with the playing style of the world-beating football team, Barcelona.

Excited UK newspaper headlines spoke about Japan’s “fairy tale” success and its “incredible journey,” inspired by the Blossoms’ brilliant penetration of the defenses of a formidable Ireland side, and the fantastic determination with which they held off the Scottish onslaught to maintain their winning margin through the heart-stopping final minutes of the match that secured their place as the winners of Pool A.

Watching that gutsy defensive performance was a vivid demonstration of the meaning of the Japanese phrase issho kenmei—which I would translate as “placing one’s life on the line for a yard of ground.”

The weeks-long encampment of the 20 visiting rugby teams in a dozen host towns across the Japanese archipelago has forged countless friendly encounters, and probably a good many lifelong bonds, between people from very different backgrounds. Rugby is like a shared language and experience that has forged many close ties between communities far apart from each other.

The people of Kamaishi in Tōhoku who packed its Memorial Stadium share the same intense passion for rugby as the former coal miners of the Welsh valleys whose tough sinews and fearlessness on the pitch have made Wales one of the world’s top rugby nations and made Cardiff one of the natural homes of the global sport. Kamaishi’s tragic loss of life in the 2011 tsunami is matched by the hardship and dangers of life in the pits for generations of rugby-playing men from the Welsh valleys.

New Chapter in a Long History

The Rugby World Cup, which began in 1987, has already created its own pantheon of superstars, including England’s Jonny Wilkinson, whose last-minute drop goal against Australia to win the 2003 final became an instant legend. And Jonah Lomu, the towering 119-kilogram, 196-centimeter New Zealand winger who scored a record 15 tries in two World Cups in the 1990s. Now Michael Leitch, Matsushima Kōtarō, Fukuoka Kenki, and their teammates have earned a place among the roll of honor of those who have written the story of world rugby.

Only recently a British local historian, Mike Galbraith, unearthed evidence showing that rugby was played in Yokohama as early as the 1860s, at the initiative of a contingent of British soldiers who were sent there to protect the consulate in the port city after a samurai had used his sword to kill a British merchant, Charles Richardson. Richardson’s fault is said to have been that he failed to give way in deference to the passage of a travelling daimyō. History records that the Yokohama Foot Ball (meaning rugby) Club was founded in 1866, which would make it one of the oldest open rugby clubs in the world. 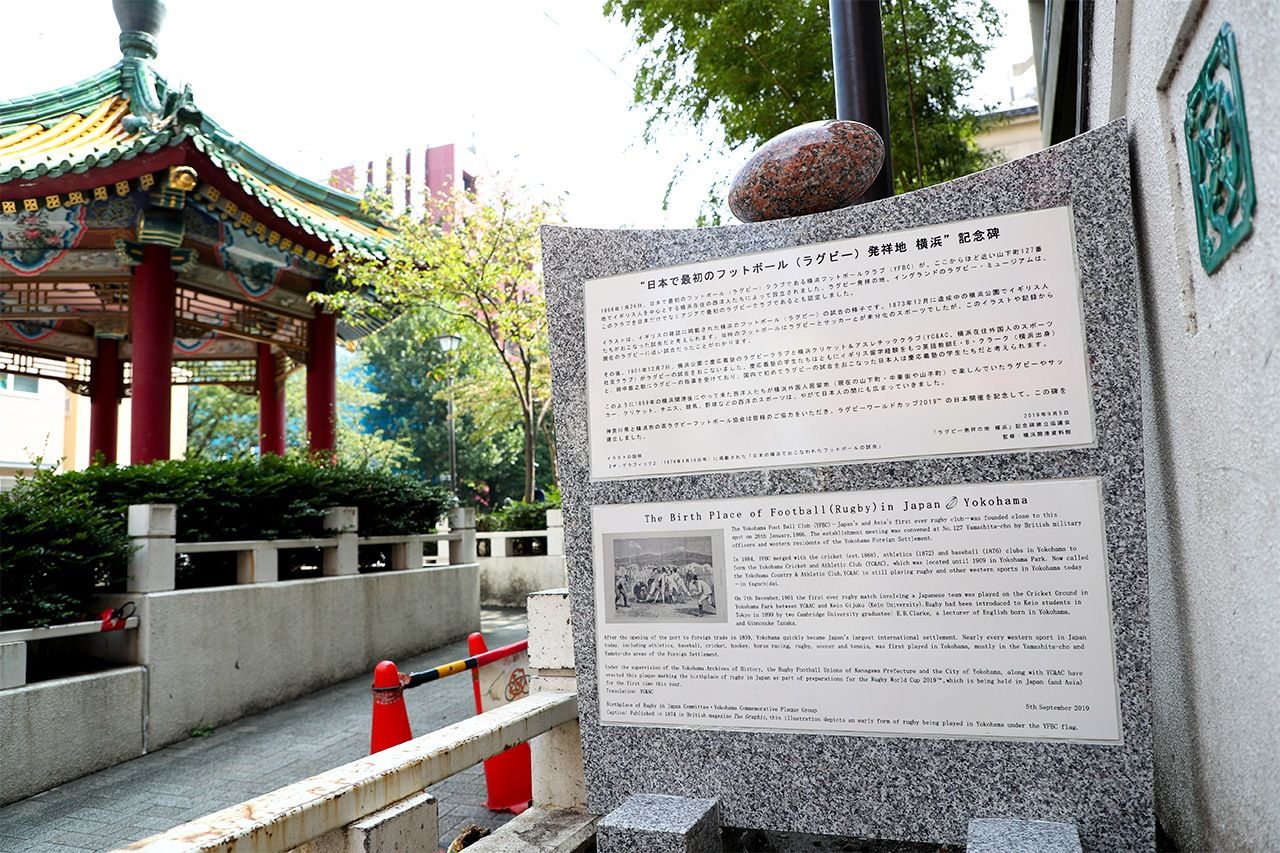 A memorial marking the "birthplace of rugby" in Japan was erected in in Yokohama on September 5, 2019. (© Jiji)

So it is fitting that the World Cup final will be played at Yokohama stadium, very close to the birthplace of the game in Japan during the final years of the Tokugawa shogunate, just before the rapid modernization of the country began with the Meiji Restoration. And the best possible legacy of the Blossoms’ achievement in this tournament, becoming the first newcomers to progress to a quarterfinal, would undoubtedly be that the Tier One rugby nations find ways to include Japan in regular international competitions at the top level. That would give Japan’s talented players the best chance to perform even more convincingly in future World Cup competitions.

Japan has a fine track record in hosting major international sports events, from the 1964 Tokyo Olympics to the soccer World Cup, which it cohosted with South Korea in 2002, and the present world festival of rugby. The 2019 Rugby World Cup has given Japan a boost to its self-confidence at a time of worrying tensions with its neighbors. And the fabulous success of a multiethnic team of rugby players playing in shirts with “Nippon” written on them represents a significant step forward—progress of a different kind.

And what has Japan given the world this autumn? A joyful experience, tempered by shared sorrow over the loss of life from a natural disaster; and a Rugby World Cup that will be remembered not only for its great matches but also for the extraordinary team spirit shown by Japan’s rugby team and by the people of Japan.

(Originally written in English. Banner photo: Fans from around the world come together in front of Kamaishi Station on September 24, a day before the match between Fiji and Uruguay in the 2019 Rugby World Cup. © Jiji.)