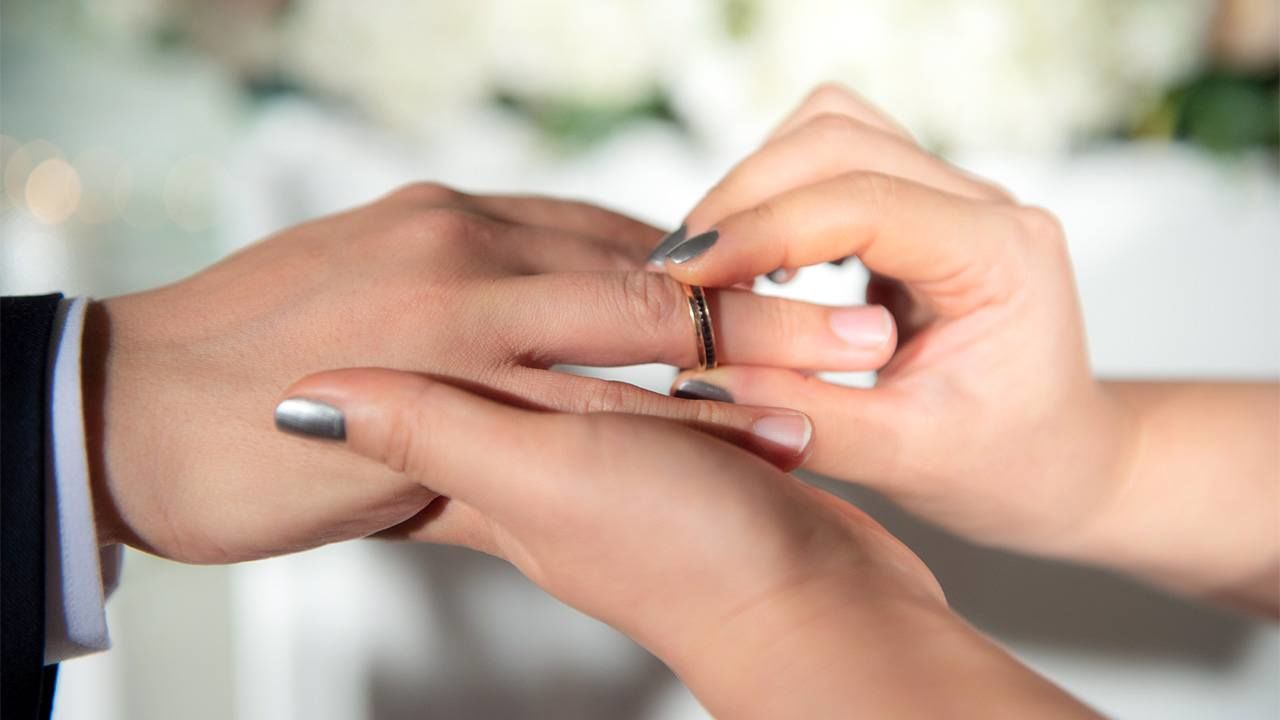 Marriage: Readiness to Settle Down More Important Than Love in Today’s Japan

Society Culture Lifestyle Jan 28, 2020
About 10 years ago, it was said that people need to apply the same mindset they had for shūkatsu (job hunting) to konkatsu (spouse hunting). The advent of online dating has spurred momentum toward trying to find better and better partners. But young people aren’t the only group concerned about konkatsu today; promoting marriage is seen as a way to boost Japan’s low birthrate.

The word konkatsu (spouse hunting) has become deep-dyed in everyday conversation in Japan, but its history is not so old.

In 2007, the sociologist Yamada Masahiro first used the word in an interview by journalist Shirakawa Tōko for the weekly magazine Aera. The following year, they copublished a book titled Konkatsu jidai (The Age of Spouse Hunting). In 2009, NHK and Fuji TV broadcast dramas with spouse hunting as their main theme, and the word konkatsu spread explosively. In just 10 short years, the concept has become deeply rooted in Japanese culture.

Let’s take a look at what konkatsu is. Yamada and Shirakawa assert that Japan used to be a society where majority of the population married, and senior members of social circles provided singles with arrangements with potential partners; but that in recent times people need to, and in fact have started to, actively search for spouses with the same mindset that they conduct shūkatsu (job hunting).

Nowadays, there are not many men who earn a salary high enough to support their families by themselves. Women who desire to become housewives, as a result, face a more limited selection of potential husbands. With that in mind, Yamada and Shirakawa encourage women to pursue double-income marriages, thereby lowering their financial expectations for their partners and expanding the pool of eligible men.

Women have certainly advanced in Japanese society, with much progress being made over the past decade, and the number of double-income couples has increased as the founders of konkatsu had hoped a decade ago. However, the realities of konkatsu have gone in a completely different direction. Instead of lowering the salary level that women require of men for marriage, many single women have begun attending cooking and etiquette classes to “polish themselves” before bringing even higher criteria to the table at konkatsu parties, where they compete fiercely for the most eligible men.

In this reality of konkatsu, people pursue “assortive mating”—sorting out potential partners by prerequisites for the partner they want according to the most desirable lifestyle—and promote themselves against their competitors. This is marketing. In fact, on the shelves in Japanese bookstores, you can easily find a lot of marriage how-to books that give advice based on marketing techniques. This trend is unlikely to stop due to the advent of online konkatsu services that make it easy to narrow down potential partners who meet one’s conditions from a large set of profile data.

Finding partners online is a worldwide phenomenon. For example, in the United States, it was reported that 39% of the couples who were married in 2017 met their partners online. In academia, analysis of activities on online dating sites has become popular in recent years.

However, Japanese online dating sites are unique in the sense that they are places to look for “spouses,” whereas most of the sites in other developed countries are places to look for “mates” instead. This contrast reflects the different dating cultures. In the societies of many developed countries, it is common for people to meet on the internet, like they would in any other encounter, then date numerous times, and in some cases, live together and get married. On the other hand, in Japanese society, people distinguish konkatsu (spouse hunting) from koikatsu (mate hunting), and the former is overwhelmingly more popular than the latter.

This style of marriage is supported because of the view that marriage is essential for social status. In her 2003 best-selling book Makeinu no tōboe (The Distant Howl of Loser Dogs), essayist Sakai Junko—an author born in 1966 who celebrated the economic bubble era in her writing—ridiculed herself as one of the “childless, unmarried women aged 30 and over” and called herself a “loser dog,” which became a buzzword of the day. This was further evidence that society was greatly aware that marriage and social status are connected. According to statistics, the predominant response to a government survey among those who wanted to marry in the 1990s was, “I don’t mind being single until I find the ideal partner.” But in the 2000s, the predominant response in the same survey has become, “I would like to get married by a certain age.”

After the collapse of the bubble economy, although many women stood firmly on their own two feet, most young unmarried women were stricken with anxiety. In stark contrast to the bubble era, when love was more important than marriage, they turned to a frenzied search for the stable ground of wealthy partners. Young men, too, fell into their own mental traps and convinced themselves that they had to become pillars of stability in times of uncertainty. Konkatsu symbolizes the circumstances of such a Japanese society.

The Wavering Japanese Sense of Family and Marriage

Where will marriage go from here? One Japanese writer noted, “Using online calendars to publicly show when their sex partners, meaning lovers or spouses, are not around, and actively recruiting other partners are commonplace in the world of dating sites, matching apps, and dating clubs.” He called this emerging trend “body sharing,” from the concept of the sharing economy. As the taboo on premarital negotiations and extramarital romances diminishes, he envisions that the institution of marriage may change so that each couple can freely select what their duties and privileges accompanying marriage should be.

Contrary to this public support, today’s ruling parties with rock-solid political support are against these things, or at least cautious in considering them, so it is difficult to expect change in the near future. In this situation of stalemate, one of the possible futures is that marriage as a legal institution will lose its credibility in the eyes of the public. Even today, young people understand that there are many same-sex couples and common-law couples who have no desire to change their family names. How long can Japan’s current legal institution limp on without making room for these people?

We must also note, however, that young people have different things in mind when they imagine what a couple is. While the idea that “husbands should work outside the home and women should be homemakers” is generally on the decline, this thinking has been on the rise among women in their twenties for the past 20 years. Quite a few young people, while embracing the liberal view on marriage—including same-sex couples and common-law couples—are seeking a more conservative family lifestyle for themselves.

This trend among women in their twenties contrasts with the response to the same question by women aged 18 to 19; in the 2016 survey, just 16% of the respondents from the younger category agreed, even including the “agree somewhat” replies. Although the sample size is small and further investigation is needed, it’s possible that women are turning to more conservative ideas about what a family is after they enter their twenties and face the realities of society. Konkatsu, which reflects these marriage and family values, is a problem not only for young people, but for society as a whole. 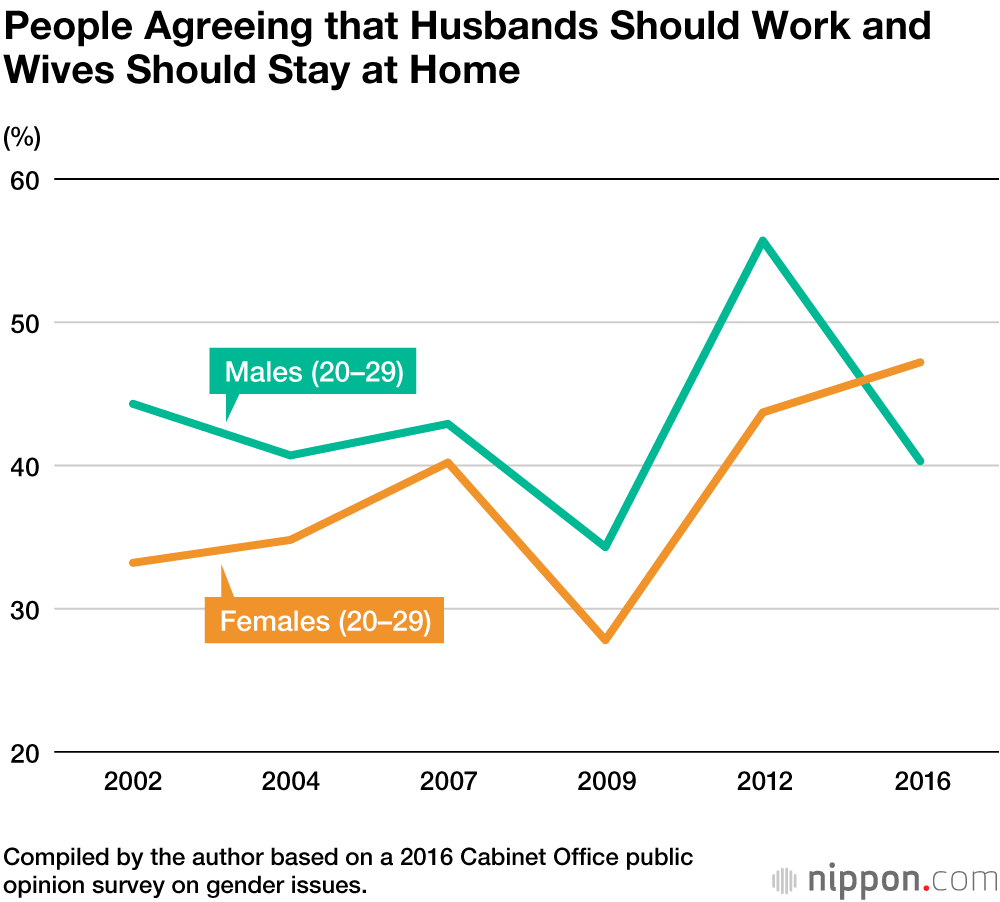 Konkatsu is attracting attention as a solution to the stagnant birthrate in Japan, where the number of children born to unmarried couples is extremely low and thus the marriage rate is decisive for improving the birthrate. According to Yamada Masahiro, public support for marriage has become a growing focus of the government’s research group on birthrate issues since the word konkatsu was coined.

In 2012, Shirakawa Tōko and others proposed the term ninkatsu (pregnancy hunting, or trying to get pregnant through various means), following shūkatsu and konkatsu, and it also carved out considerable social recognition thereafter. The Abe administration also became interested in konkatsu and ninkatsu, and has been introducing measures supporting these activities into its policy scheme since then.

Can the legal institution of marriage be maintained? How can the issues of same-sex marriage and separate surnames be dealt with? What form will women’s advancement in society take? What will their families look like in the future? To shape the future of the society with wide support from the public, these issues need to be discussed in the political arena and people from across the political spectrum should engage in the discussion. Konkatsu is no longer just a trend; it is a vital political issue.