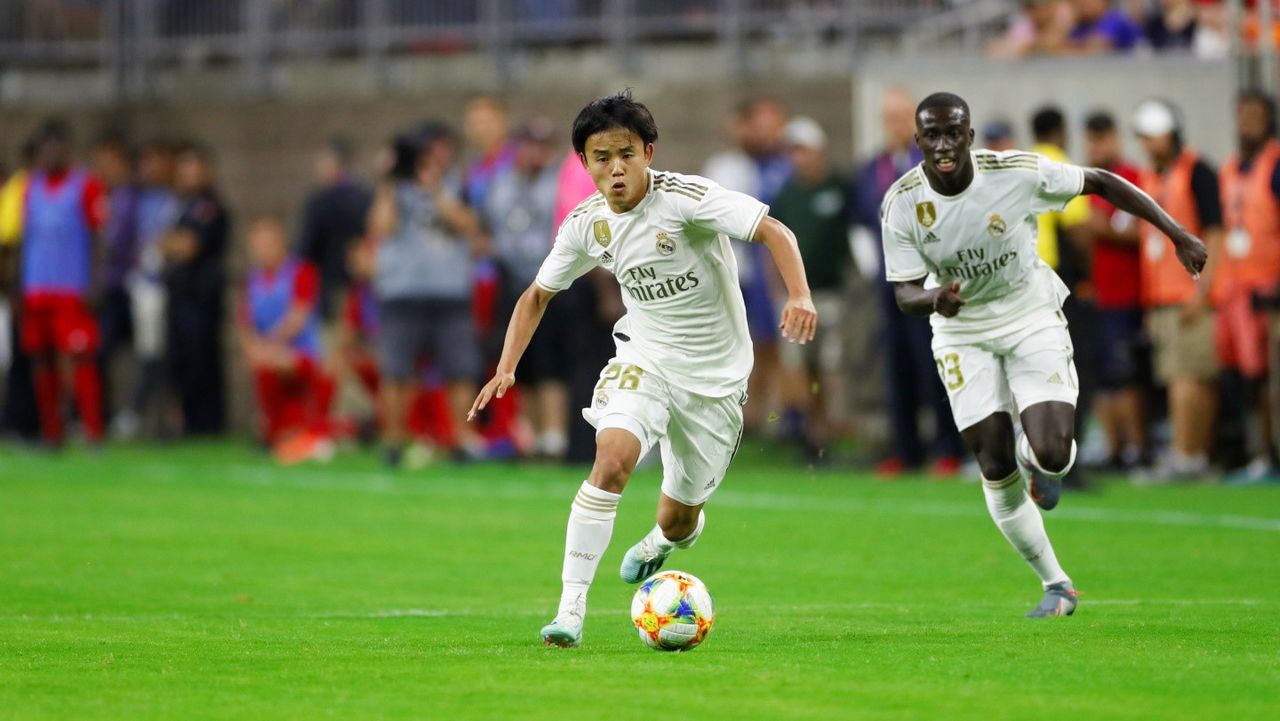 Teenage Soccer Star Kubo Takefusa Back to Business in Spain

Sports Dec 25, 2019
Kubo Takefusa is the talk of Japanese soccer. Having spent time at powerhouse FC Barcelona’s youth academy before returning to Japan for a stint in the J. League, in 2019 he again set out for Spain, signing with Real Madrid.

The cameras fix on Kubo Takefusa, beaming his image across Spain. It is early November in 2019, and the 18-year-old Japanese soccer prodigy has just scored his long-awaited first goal since moving to Spain’s La Liga, clinching Mallorca’s 3–1 win over Villarreal. Standing by the pitch after the match, Kubo, a panel emblazoned with sponsor logos hovering behind him, reflects on the milestone. “I’ve dreamed of scoring in the top division for a long time,” he tells a reporter in fluent Spanish, a content grin crossing his rain-soaked visage. “Now that I’ve done it, though, I want to keep putting the ball in the back of the net.”

Mallorca, a small island floating in the Mediterranean Sea, has been abuzz over the midfielder ever since he arrived on loan from Real Madrid in the summer. The local side, RCD Mallorca, was promoted to the top division at the end of last season, and fans and the front office hope the young star’s ball finesse and goal-scoring prowess will help keep the team in the top flight. Mallorca has been something of a Cinderella story—just two seasons ago it was playing in the third tier—and Kubo, returning to Spanish soccer after three long years away, is looking to write his own chapter of the fairytale.

In the Media Spotlight

Kubo made news in Japan and Spain in June 2019, when he decided to say goodbye to his J. League team, FC Tokyo, and sign with Real Madrid. He sparked another media frenzy when in August he came to Mallorca on a season-long loan in the hopes of getting more playing time. Local supporters were ecstatic, welcoming the young midfielder with open arms.

In mid-October, the excitement swelled ahead of Kubo’s first matchup against Real Madrid since the move. The day before the game, Spain’s largest sports newspaper, Marca, carried a four-page interview with the teenager that featured a beaming photo of him, arms outstretched with a white uniform of Real Madrid in one hand and the red kit of Mallorca in the other.

As the match got under way, the cameras were trained on Kubo, who was starting on the bench. Mallorca went ahead early in the first half, sending the stands into frenzied jubilation. Kubo got the nod part way through the second half and rushed onto the field, taking position between Real’s Brazilian national team duo of Vinícius Júnior and Marcelo, his teammates just a few weeks earlier. Itching to make a statement, Kubo fired a pass upfield only to have the defense easily intercept the ball. 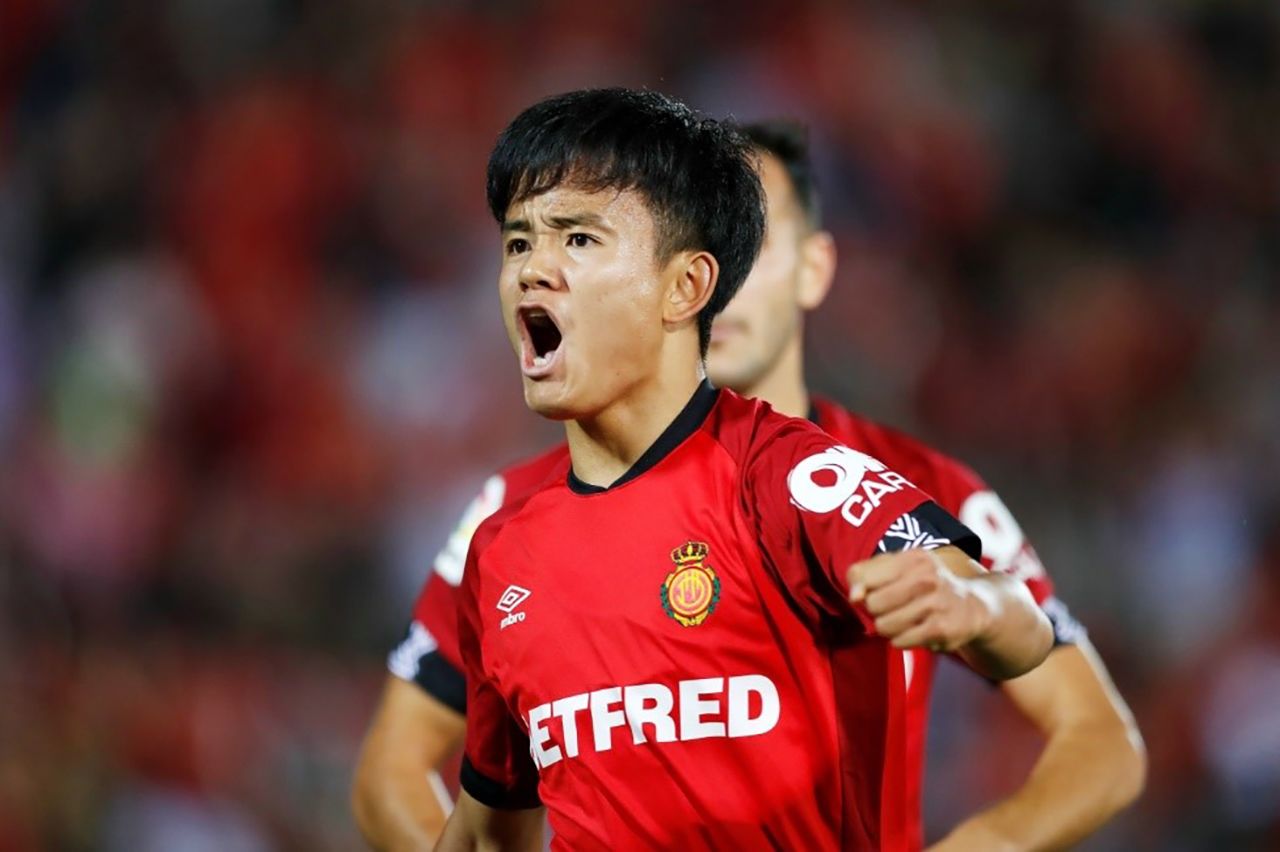 Kubo Takefusa felt he could make more of an impact by joining RCD Mallorca. (© Kawamori Mutsu)

Underdogs Mallorca held on to win 1–0, the surprising result earning the club three points and boosting the players’ confidence. Despite his limited role, Kubo contributed to the win. Casually clapping his hands, he joined his teammates in celebrating the victory with the cheering home crowd. He was surely aware, though, that he would need much better performances in the future to secure a starting spot.

Decisions to Be Made

In leaving Real Madrid, Kubo went from a club boasting a roster worth €641 million—second only to Barcelona’s €671.4 million—to a regional side paying out a relatively modest €30 million, the lowest amount in the league. However, Mallorca is no lightweight club. The organization is known for spotting and developing top talent—legendary Cameroon striker Samuel Eto’o forged his reputation as a formidable scorer while playing for “Los Bermellones.” Bolstered by its long-awaited return to the top flight after six years in the lower divisions, the team is confident it is standing on the precipice of a new era.

Kubo did not decide to come to Mallorca on a whim. In the Marca interview, he laments not having the start he had hoped, but insists he will keep improving and is dedicated to helping the team in every way. However, he insists that the relationship will be mutually beneficial, stating confidently that “I can more than contribute to Mallorca, and Mallorca can help me grow. Although the club is newly promoted, it has a long history in the top division. Coming here is a great opportunity to grow and improve.”

Playing for Real Madrid’s reserve squad, Kubo would have practiced with the top team. It is likely he would also have been tapped to compete in the all-Spain soccer tournament Copa del Rey and the group stage of the UEFA Champions League, offering him a chance to break into the top team—Real’s young star Vinícius Júnior rose to the top echelon last season just in this manner.

However, in choosing Mallorca, Kubo made gaining first-division experience his top priority. This is a risky choice, though. Kubo excels as an attacking midfielder, but playing on a squad waging an uphill campaign in its first year back in the top tier, he may find his goal-scoring opportunities limited. This, in fact, was the case against Real Madrid, as the powerhouse opponent’s offensive pressure repeatedly forced Kubo into his own penalty area.

He will also need time to adjust to his new club. It is not a question of ability—he showed he can carry his own while playing for Real Madrid over the summer. But Kubo will be honing his game under a new system and club environment.

There are signs he is adapting quickly, though. Of particular note is his ease in communicating with his teammates. Kubo does not let his youth or recent arrival stand in the way, but expresses his ideas openly, and at times vehemently. Instead of relying on an interpreter, he interacts in fluent Spanish. Mallorca coach Vicente Moreno has praised Kubo’s language ability, saying that having learned it as a youth, he speaks like a native—“perhaps better than me,” he laughs.

Kubo began studying Spanish while in elementary school with the dream of someday playing in Spain. That opportunity came in 2011, when at the age of nine he was invited to try out for FC Barcelona’s famed youth academy, La Masia. At the time, Barcelona, under then-manager Josep Guardiola, was at the pinnacle of European soccer. Kubo jumped at the once-in-a-lifetime opportunity. After the two-week trial, he was offered a position in the program and would spend the next three and a half years at the academy. 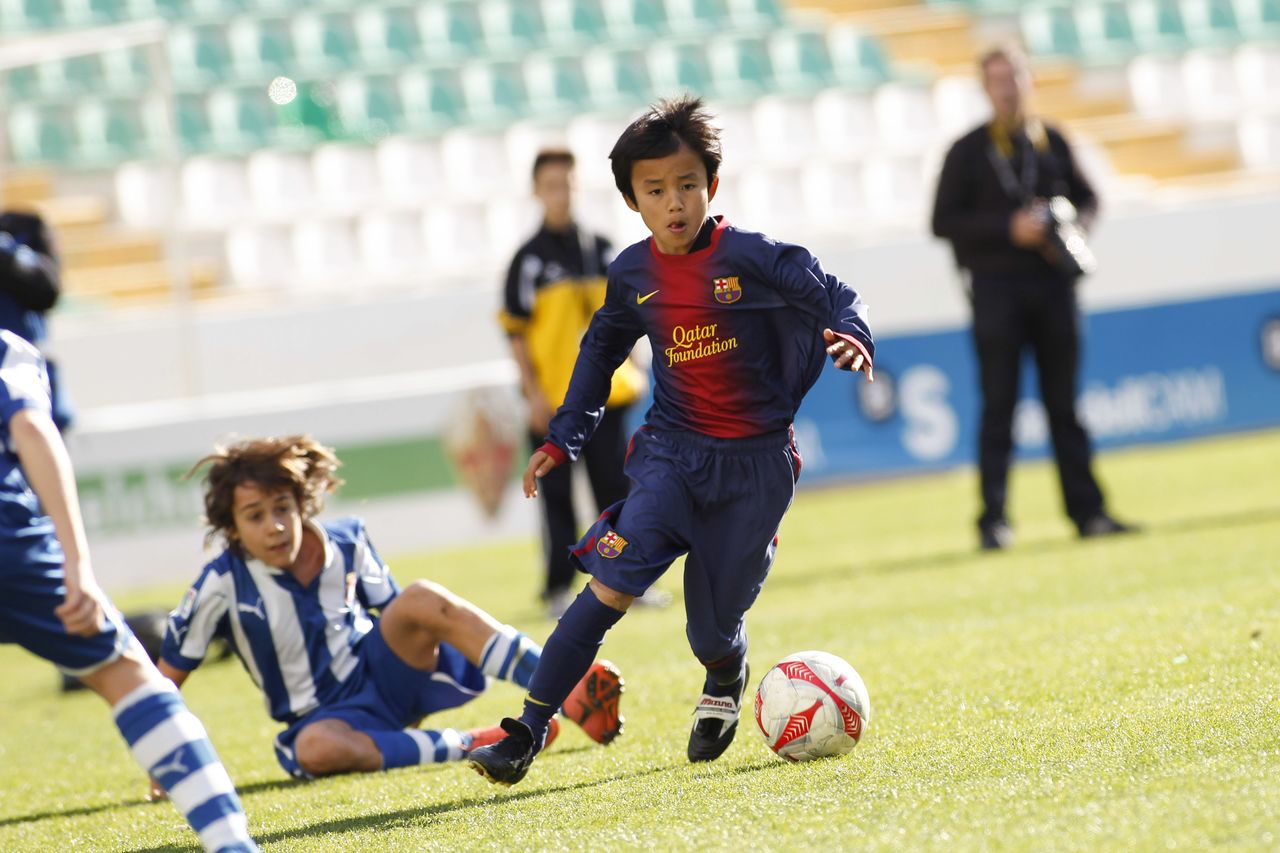 Kubo during his time at FC Barcelona’s youth academy. (© Aflo)

He steadily worked his way up the ranks at La Masia. But in 2014, misfortune befell him and several other young footballers at the academy when FIFA found that Barcelona had earlier violated international transfer rules for under-18 players. Ineligible to play in Europe, he returned to Japan, where he joined the J. League side FC Tokyo.

The ruling was a bitter pill to swallow. Kubo in Marca recalls the event: “For a thirteen-year-old boy, it’s very hard, as you want to play soccer and you don’t know why they’ve kicked you out of the country. In fact, I still don't know why it happened. If a child wants to play soccer at a good club, I don't see the reason why he can’t do it—why not let him?”

Kubo quickly switched gears, throwing himself into Japanese soccer. Although the caliber of play was below La Liga, he thrived in the J. League, his natural talent and three-plus years of training at Barcelona serving him well. In 2017, he made his Division 1 debut at the tender age of 16, a nearly impossible achievement if he had stayed in Spain. He spent part of his second season on loan to the Yokohama F Marinos, where he scored his first goal in the Japanese top flight. He returned to Tokyo for his third year, helping the team climb the table. While playing in Japan, he was also tapped for the Japanese national team, making his debut for Samurai Blue off the bench in a June friendly against El Salvador.

During this period, though, Spain had not forgotten about Kubo. The media closely followed his goals and other exploits in the J. League. When he turned 18 and became eligible to return to European soccer, Barcelona vied with other top teams on the continent to sign him. In the end, Kubo decided against returning to his old club, and instead joined its La Liga rival Real Madrid. He summed up his decision in Marca, stating simply that Real “showed me the plan they had for my career, and I liked it.”

Kubo must remain focused and train hard if he hopes to make it in one of the top leagues in the world. But Mallorca club CEO Maheta Molango is convinced that the young Japanese player has what it takes to be a superstar. He has high regard for Kubo’s drive and ability to keep both feet firmly planted on the ground amid all the media attention, something he notes is particularly commendable considering he is still only 18. Molango attributes the youth’s composure in large part to the commitment and unwavering support of his family. 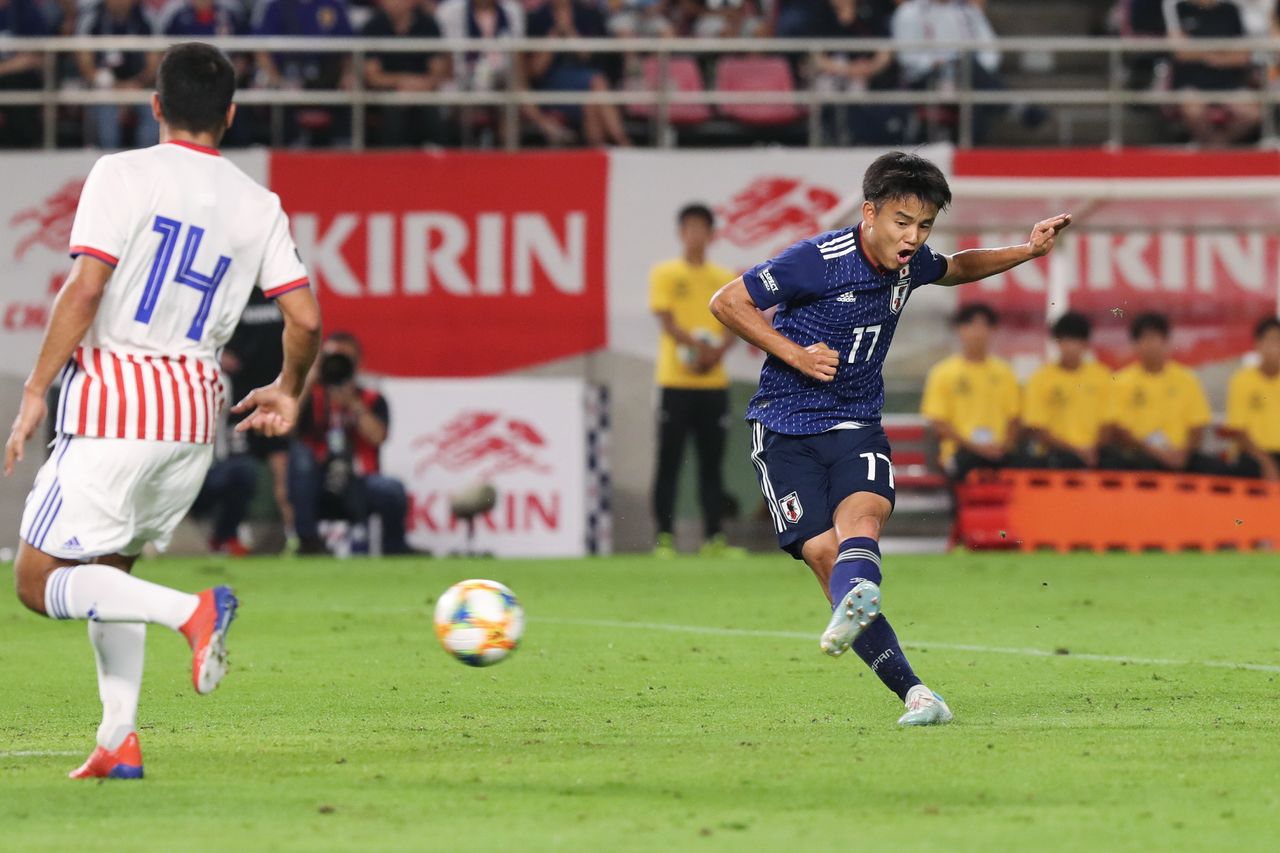 Kubo in a friendly match against Paraguay. Since getting called up in May, Kubo has regularly come off the bench to play for the national team. (© Jiji)

Kubo’s time at La Masia has earned him comparisons with other famed alumni of the academy, notably Lionel Messi and Andrés Iniesta. He shares many traits with these stars, including the way he takes advantage of open spaces, his natural ability as a playmaker, and his superb ball control.

Whether he can live up to these comparisons has yet to be seen. Mallorca’s main objective this season is to stay in the top tier, and even with his talents, Kubo must earn a starting spot on the squad by scoring goals and making assists. If he can find his rhythm and build rapport with his teammates, there is every reason to believe he will become a go-to player for the club.

Mallorca fans are hopeful. Calls of “Kubo” are regular occurrences at matches, the rumbling chant emanating from the stands each time the young midfielder takes the pitch.

Mallorca is far removed from the world Kubo knew at Real Madrid. But spared the distractions of playing at a big club, Kubo can spend the season focusing on developing his game. This year will undoubtably prove to be a pivotal one in the career of the teenage star.