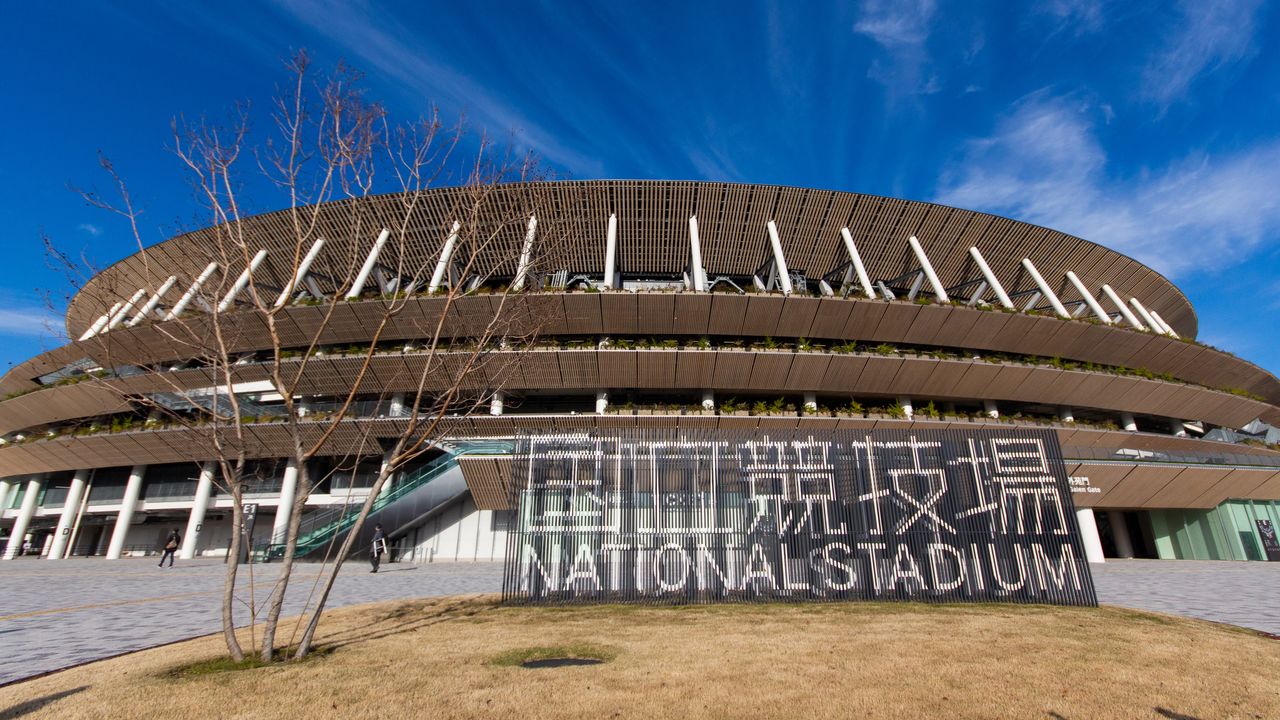 Sports Architecture Guide to Japan Tokyo 2020 Jan 10, 2020
The new National Stadium, which will serve as the main stadium for the Tokyo Olympics and Paralympics, is now finished. The building was unveiled to the press on December 15.

Japan’s new National Stadium was completed on November 30. While it was always referred to as the “New National Stadium” during the Olympic bidding process and while it was being built, as of November 30 the facility was officially renamed the “National Stadium.” The official unveiling took place on December 21, and the stadium was formally christened when the Emperor’s Cup soccer championship final was played there on New Year’s Day. The main venue for the Tokyo Olympics and Paralympics, which kick off on July 24, the stadium will be used for the opening and closing ceremonies as well as track and field events. 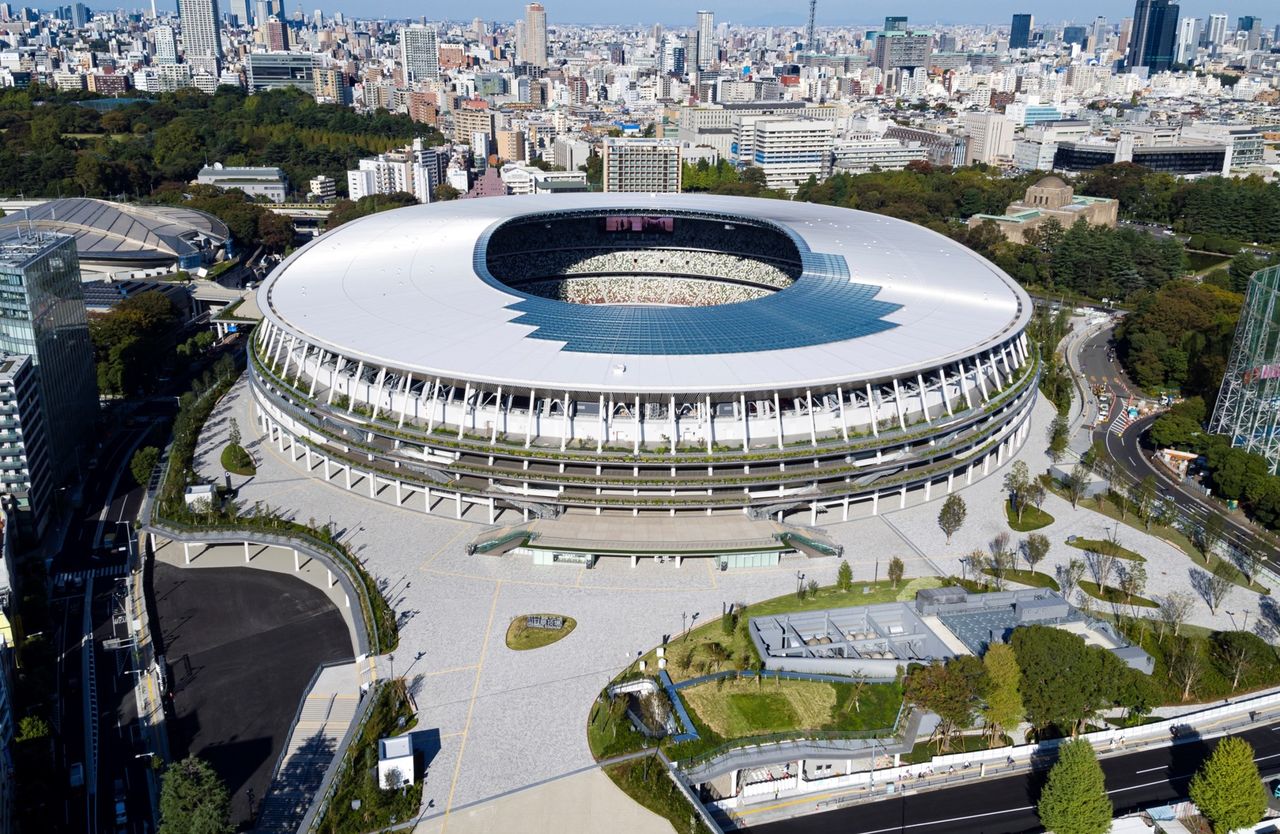 An aerial photograph of the National Stadium taken from the south. (Photo courtesy Japan Sport Council) 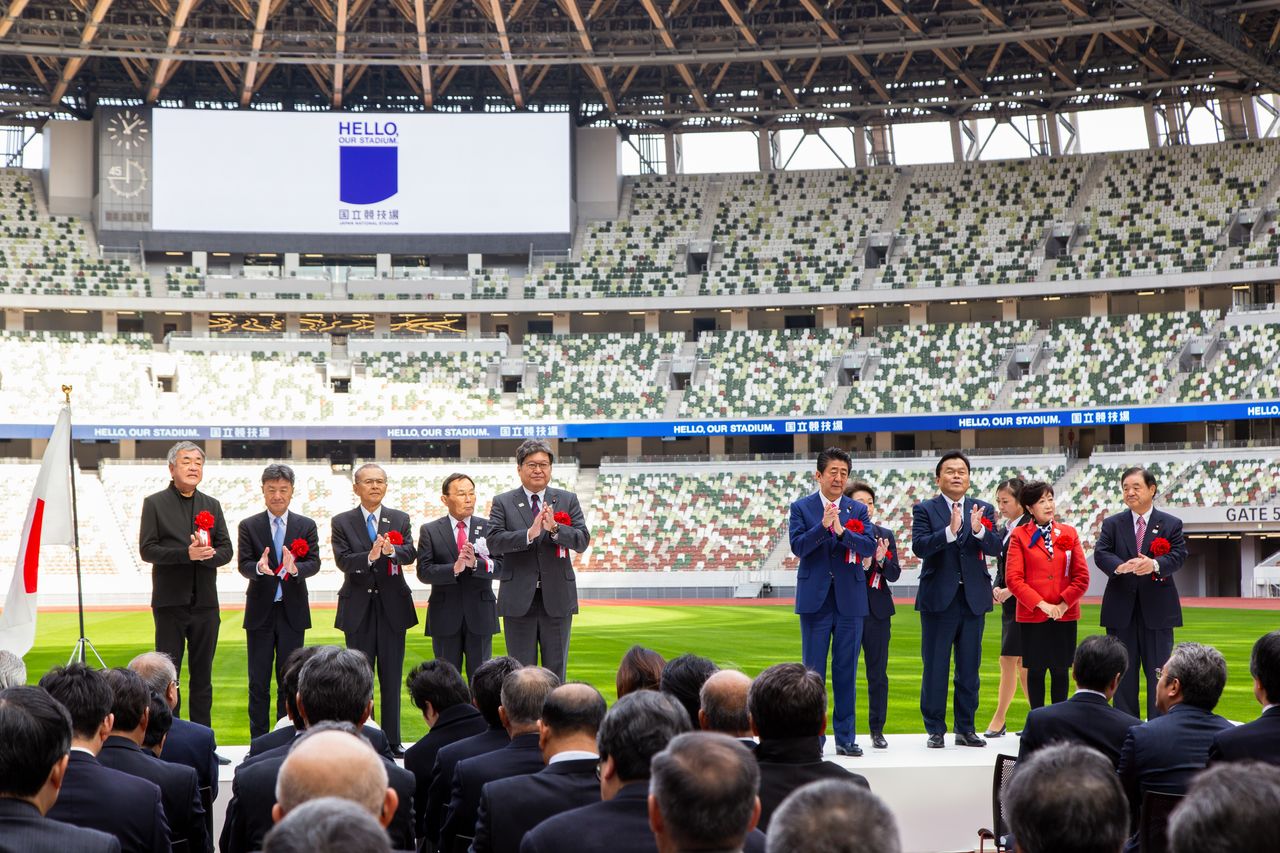 The ceremony to mark the completion of the stadium was attended by Prime Minister Abe Shinzō, Olympic Minister Hashimoto Seiko, and Tokyo Governor Koike Yuriko. At left is architect Kuma Kengo.

Built with Materials from All Around the Country

Designed to evoke the forest, the National Stadium makes extensive use of Japanese timber, and is one of few major sporting structures in the world to exude a warm, wooden vibe. Up close, you are struck by the stadium’s gigantic wooden “eaves.” Surrounded by a vertical cedar lattice, the eaves fully encircle the stadium and are stacked in multiple levels—up to five in gate areas. On the top level, the largest set of eaves, dubbed the “Grand Eaves of the Wind,” have been designed to efficiently draw air into the arena all year round. The eaves are built from timber sourced from all 47 prefectures of Japan, arranged in the order of latitude, such that the northernmost tip is made from wood from Hokkaidō while the southernmost tip uses wood from Okinawa. This is a modern take on traditional Japanese wooden building that at the same time pays attention to detail. 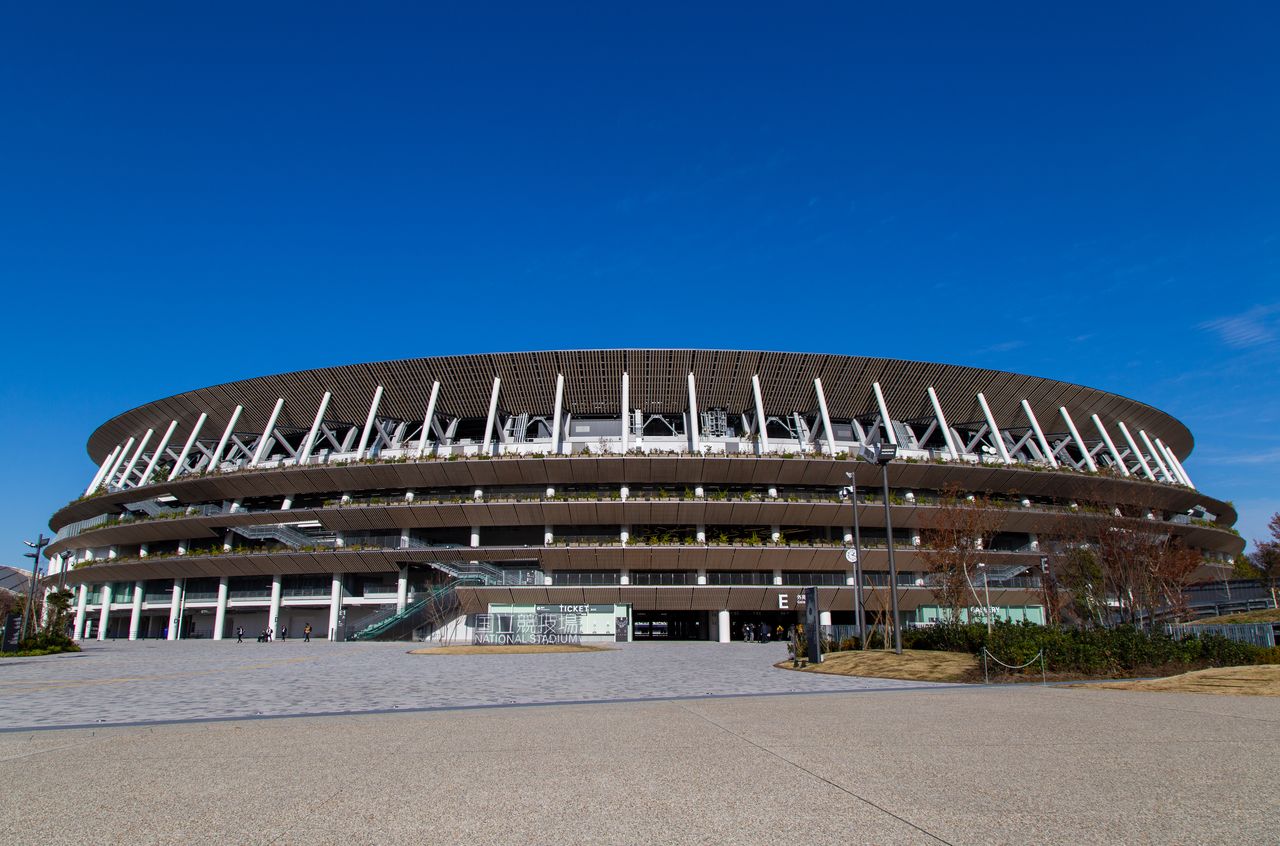 Extensive use of wood creates a warm ambience. 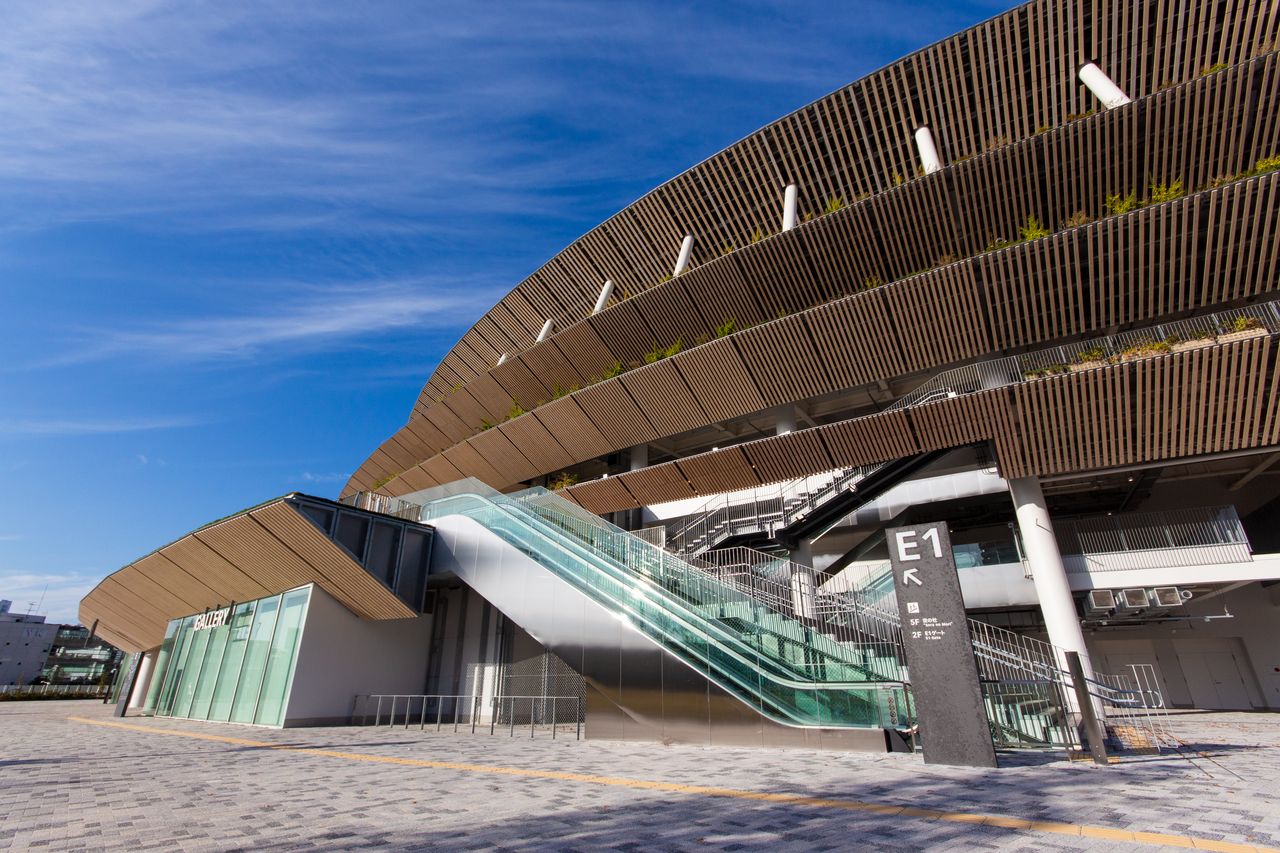 The wooden eaves are even more impressive up close.

The stadium comprises five levels above ground and two levels below, effectively placing the track and field two floors below ground level. This sunken design, combined with the fact that the stadium is flat-roofed, means that the structure has a height of less than 50 meters, making it relatively unimposing for a 60,000-seat venue. This design, combined with the building’s abundant use of wood, takes the edge of the brutal feel created by architecture of this nature, and allows the structure to blend in with the surrounding Jingū Gaien district. 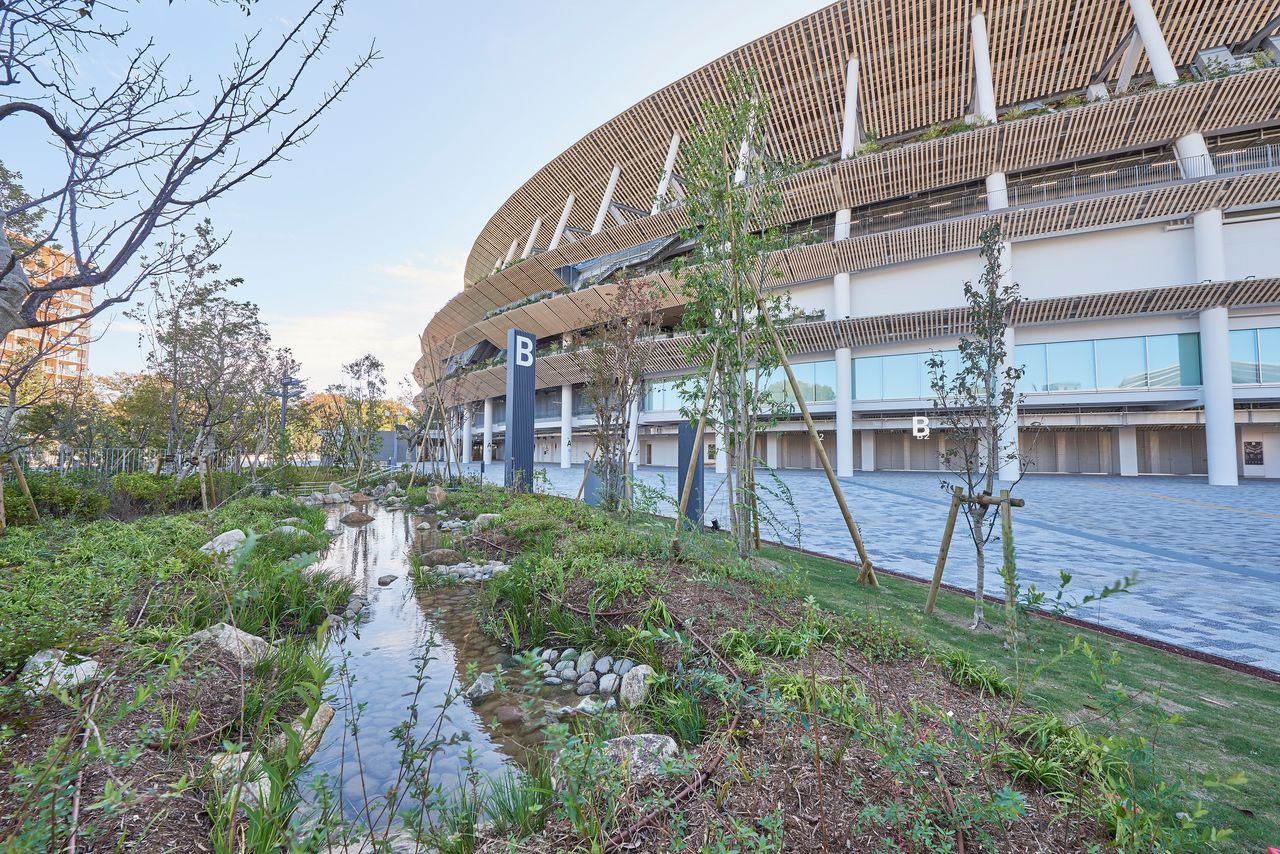 A total of 47,000 trees, representing 130 different species, have been planted around the stadium. (Photo courtesy JSC) 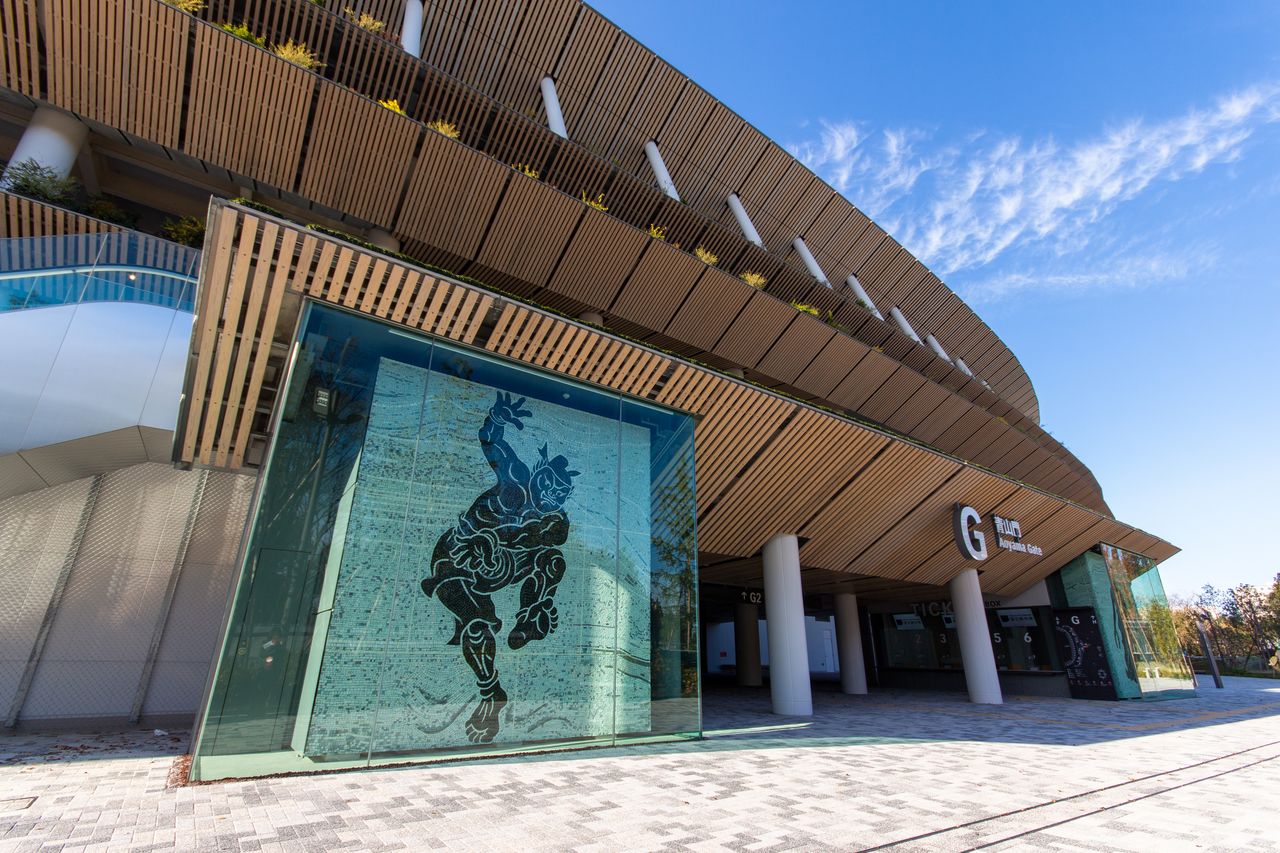 A wall painting taken from the former National Stadium near the east entrance. 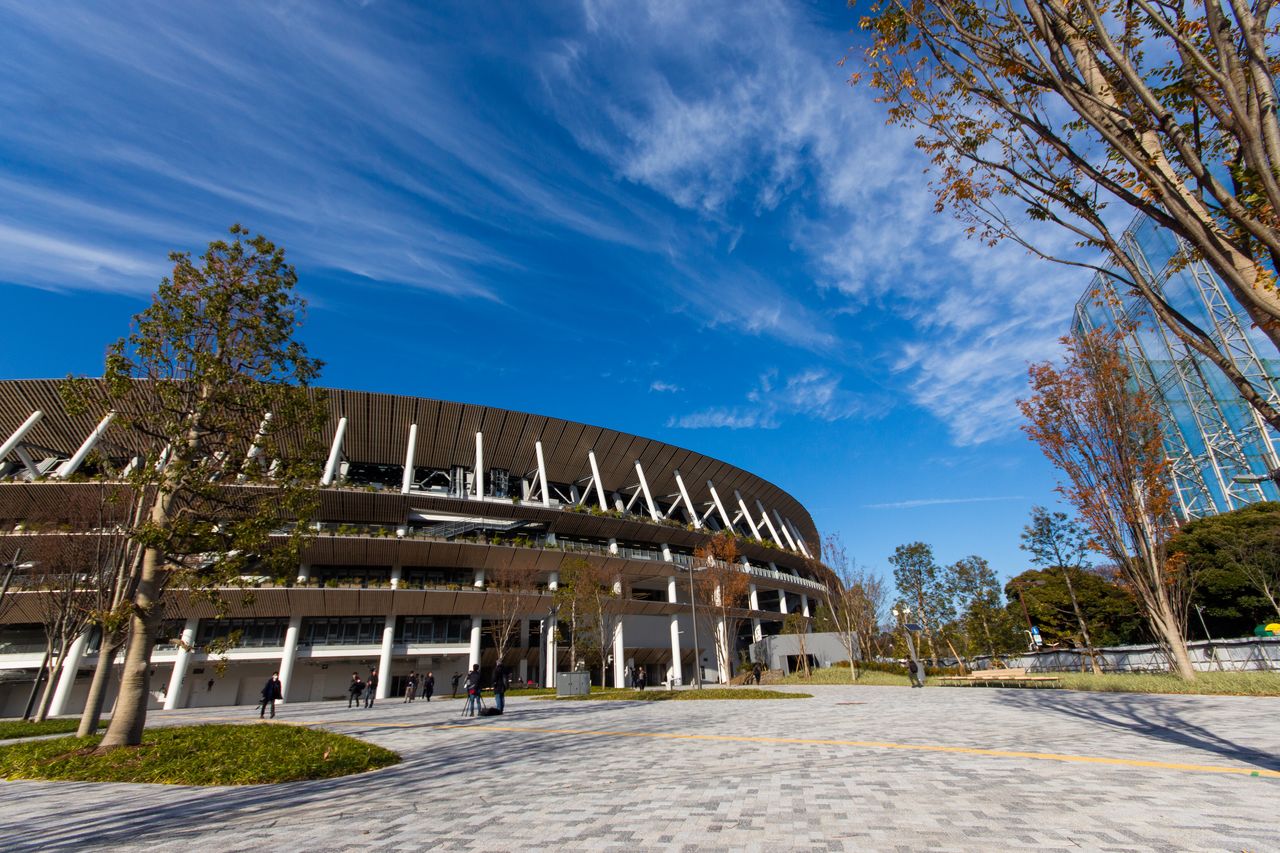 The unimposing design allows the stadium to blend in with its environs.

Finished on Time, Despite Initial Hiccups

The original design for the stadium, by architect Zaha Hadid, was scrapped after budget blowouts. Organizers went back to the drawing board and canvassed for new entries, eventually deciding on a joint proposal by Taisei Corporation, Azusa Sekkei, and Kengo Kuma and Associates in December 2015. Ground was broken one year later, and the project was completed on schedule in a total of 36 months. The stadium was handed over to its operator, the Japan Sport Council, on November 30, 2019. Construction costs, including the stadium surroundings, totaled ¥156.9 billion, within the initially agreed budget of ¥159 billion. 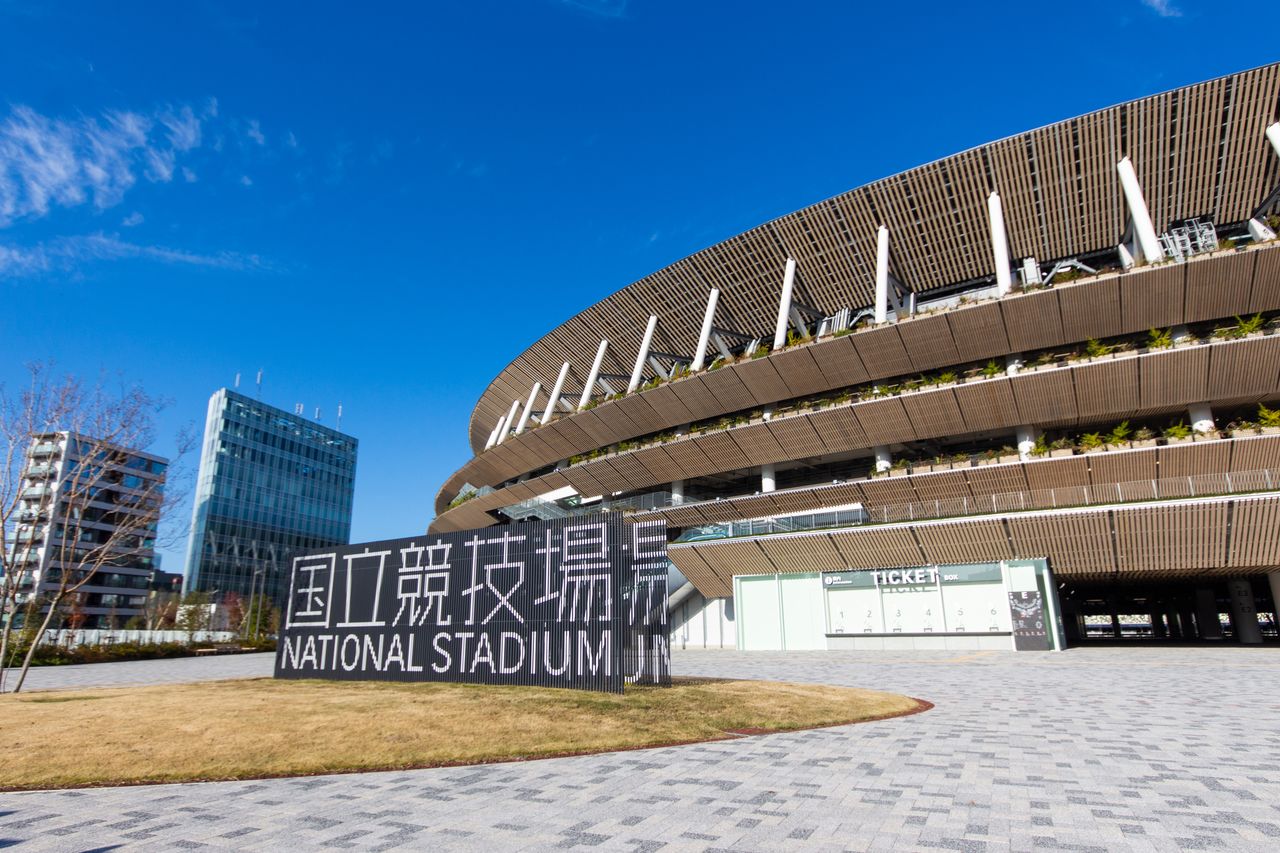 Abundant use of wood is made inside the stadium as well. The beams that support the 20,000-ton roof are made from steel, cedar, and Japanese larch. This hybrid design offers the strength of steel and the ability to absorb stresses created by winds and earthquakes. The donut-shaped roof is supported by a total of 108 beams which envelop the stands, track, and field in a warm ambience.

Effective use of wood is also made in the lounges, terraces, and exhibition spaces throughout the stadium, as well as in ceilings and benches. 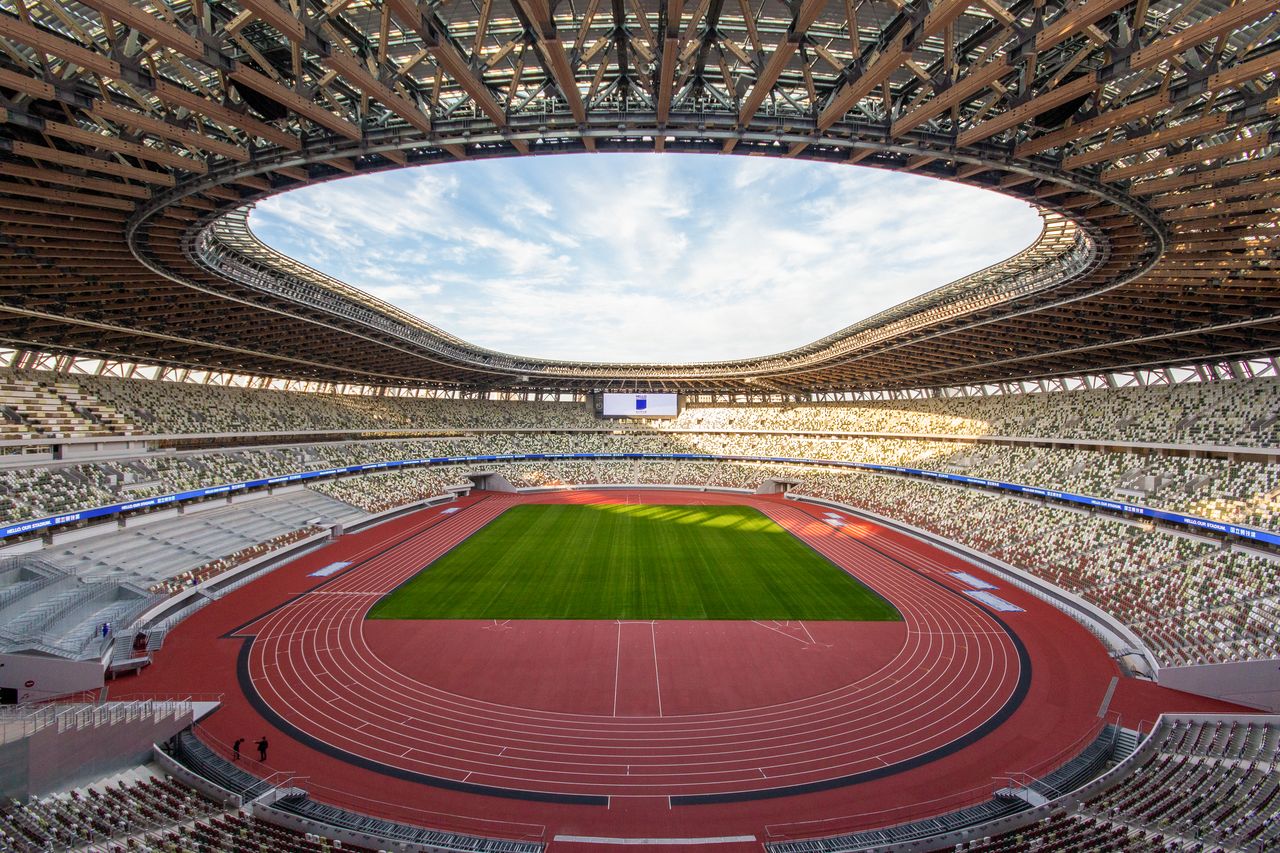 Rays of sunlight filter through the wooden beams, making you feel like you’re in a forest. 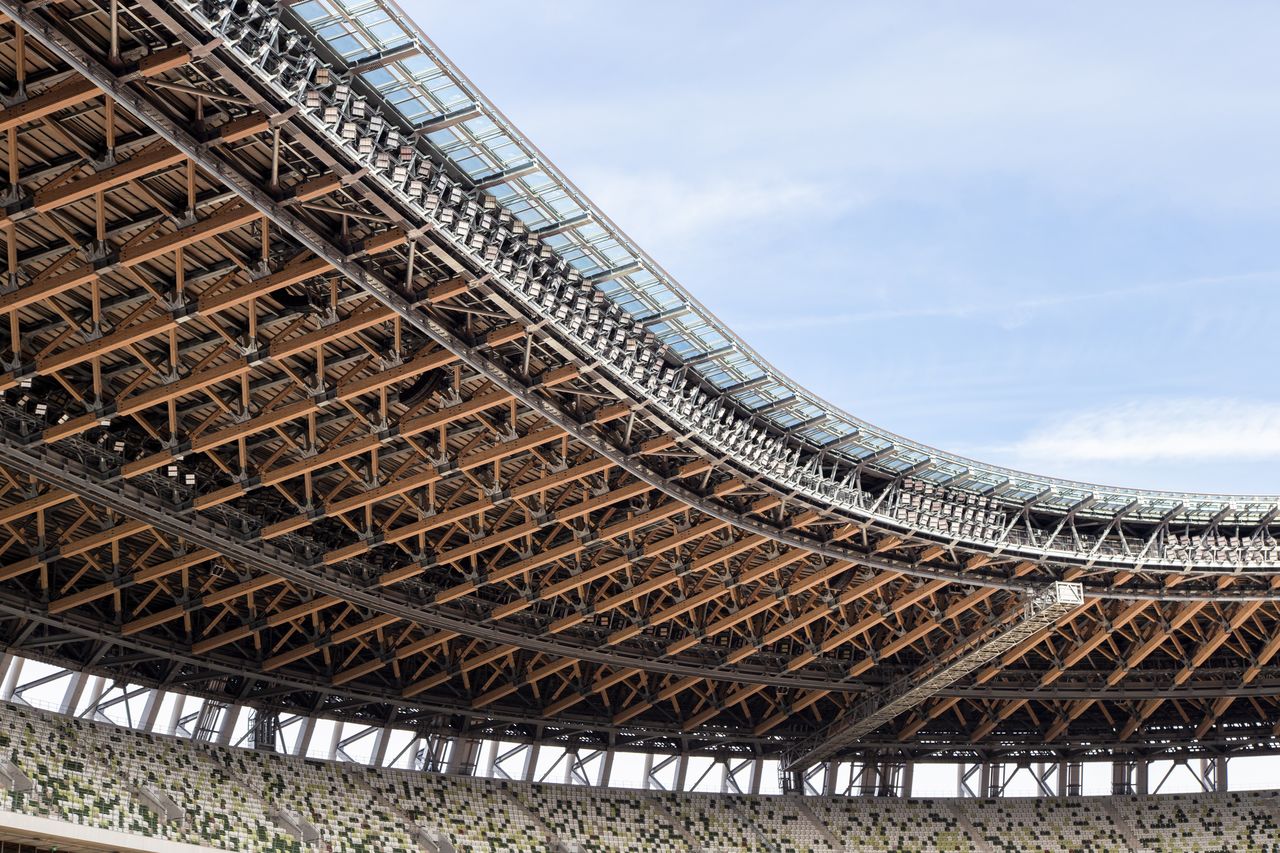 The structure supporting the 20,000-ton roof is made of wood and steel. 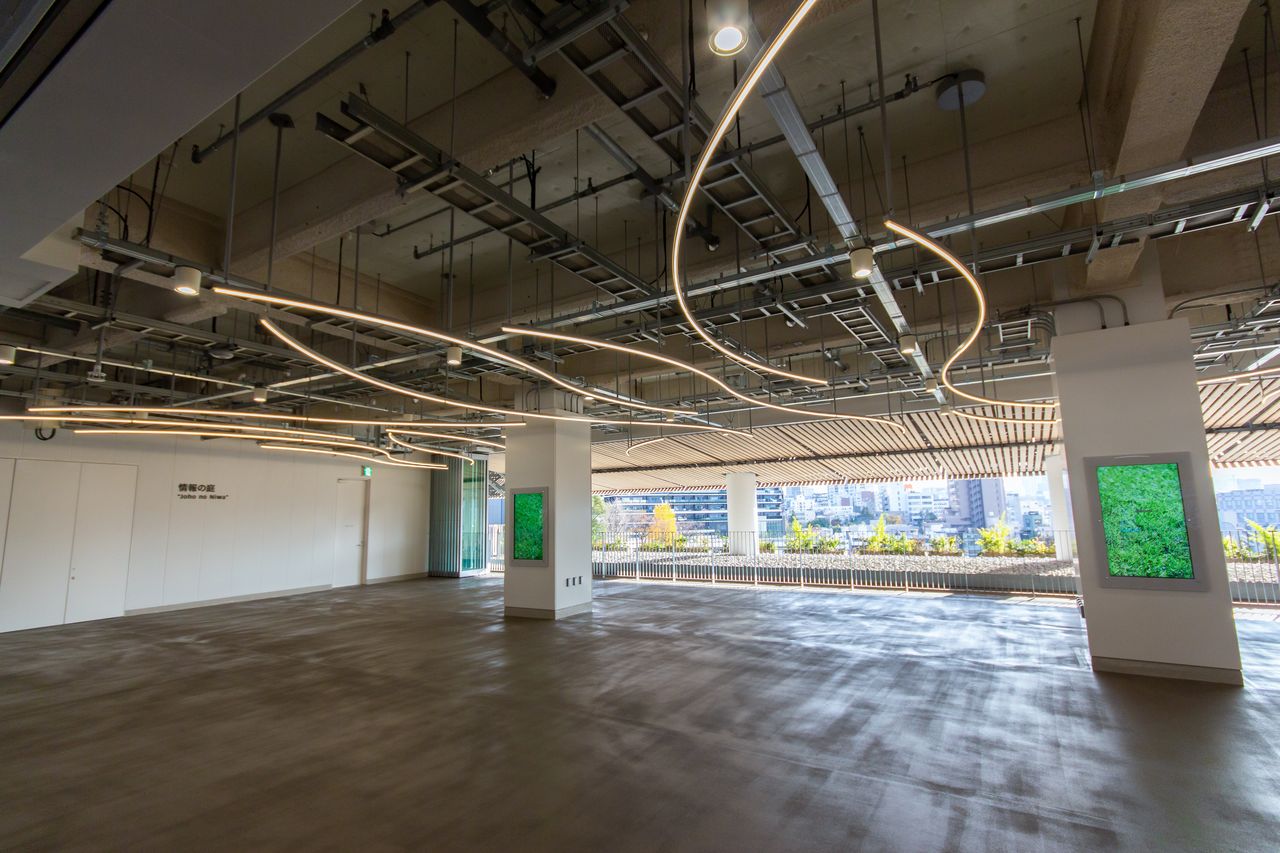 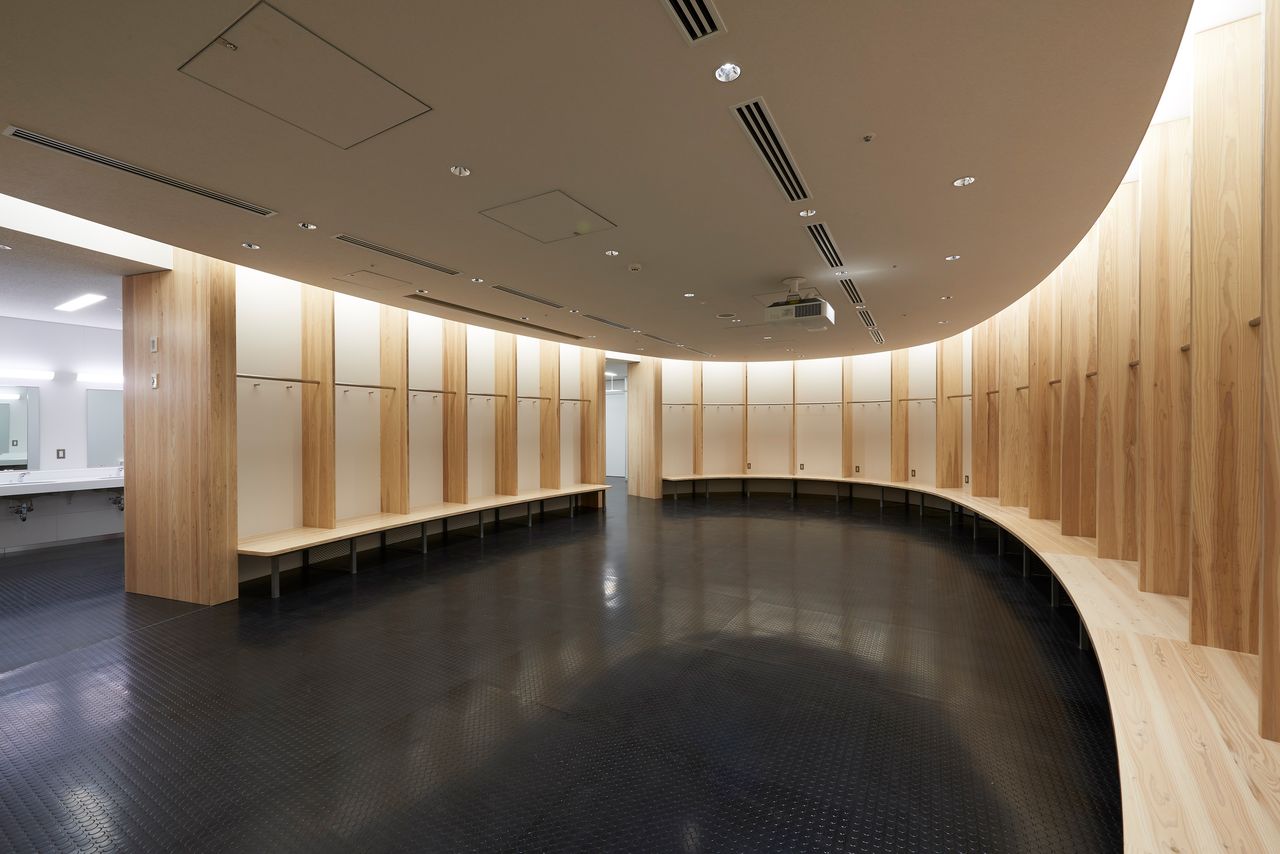 Beneath the stadium’s natural grass pitch lies a system that controls the ground temperature, ensuring optimal growing conditions year round. The running track was supplied by the Italian manufacturer Mondo, which has a reputation for creating tracks that allow athletes to reach their full potential, and is coated with highly elastic synthetic rubber. Hopefully we can look forward to some new records.

The mortar-like arrangement of the three-tiered stands leaves nothing to impede the view of the track; spectators can look forward to an unimpeded, 360° view that allows them to “become one” with the athletes. Seats have been painted in five different, randomly allocated colors that blend with the red of the track, the green of the pitch, the wood of the roof, and the blue of the sky. Designed to evoke dappled sunlight filtered through the trees, the random pattern means that empty seats do not stand out. 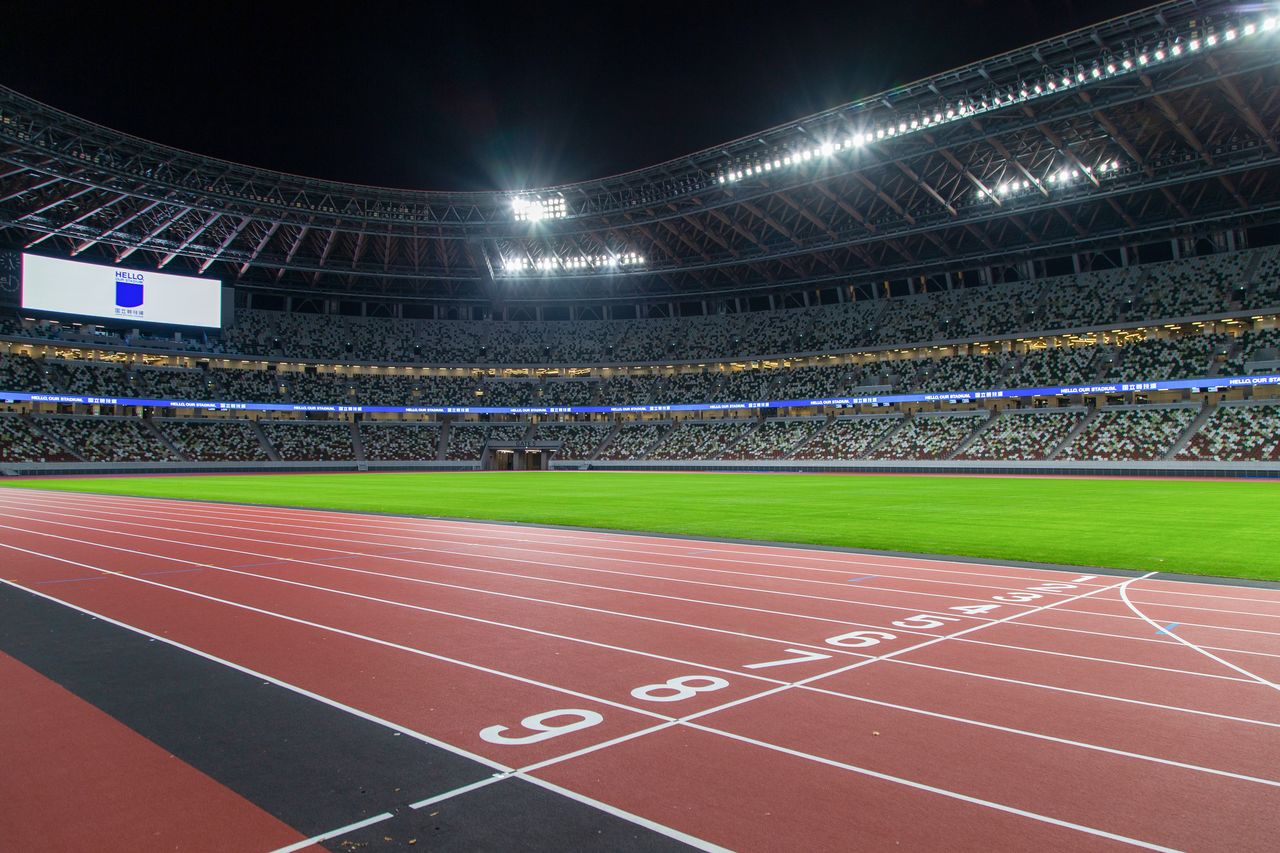 The track, field, and stands under lights. 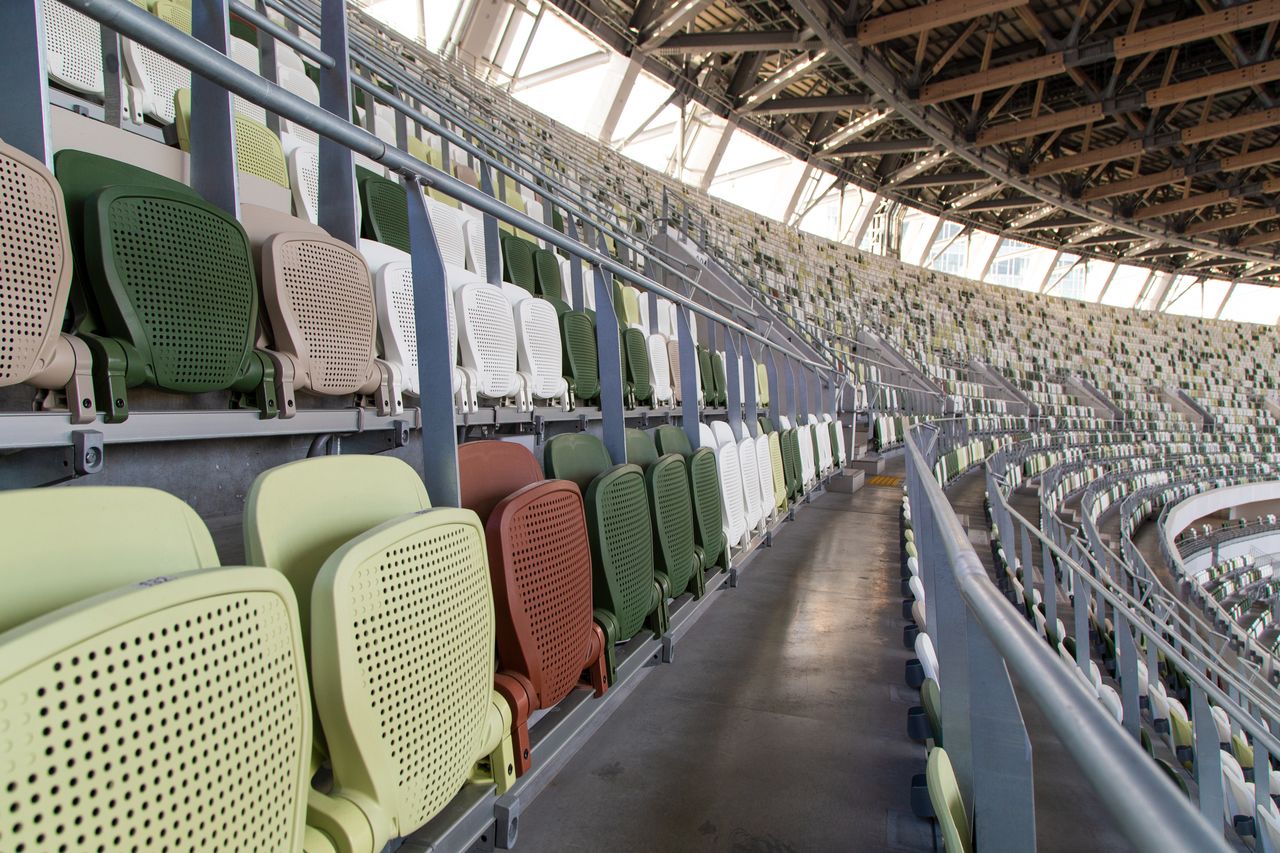 Seat colors were allocated at random.

The north and south edges of the stadium are topped by giant screens, and an electronic display known as a “ribbon board” wraps around the bottom of the middle stands. This board will displaying a variety of messages and information to complement sporting events. Above the first and second tier stands are a total of 185 fans that lower the temperature of the stands while creating an updraft that sucks hot and humid air away from the track and field in still weather and in intense sunlight. With high temperatures a subject of major concern, these fans will play an important role in keeping the Tokyo Olympics and Paralympics cool. 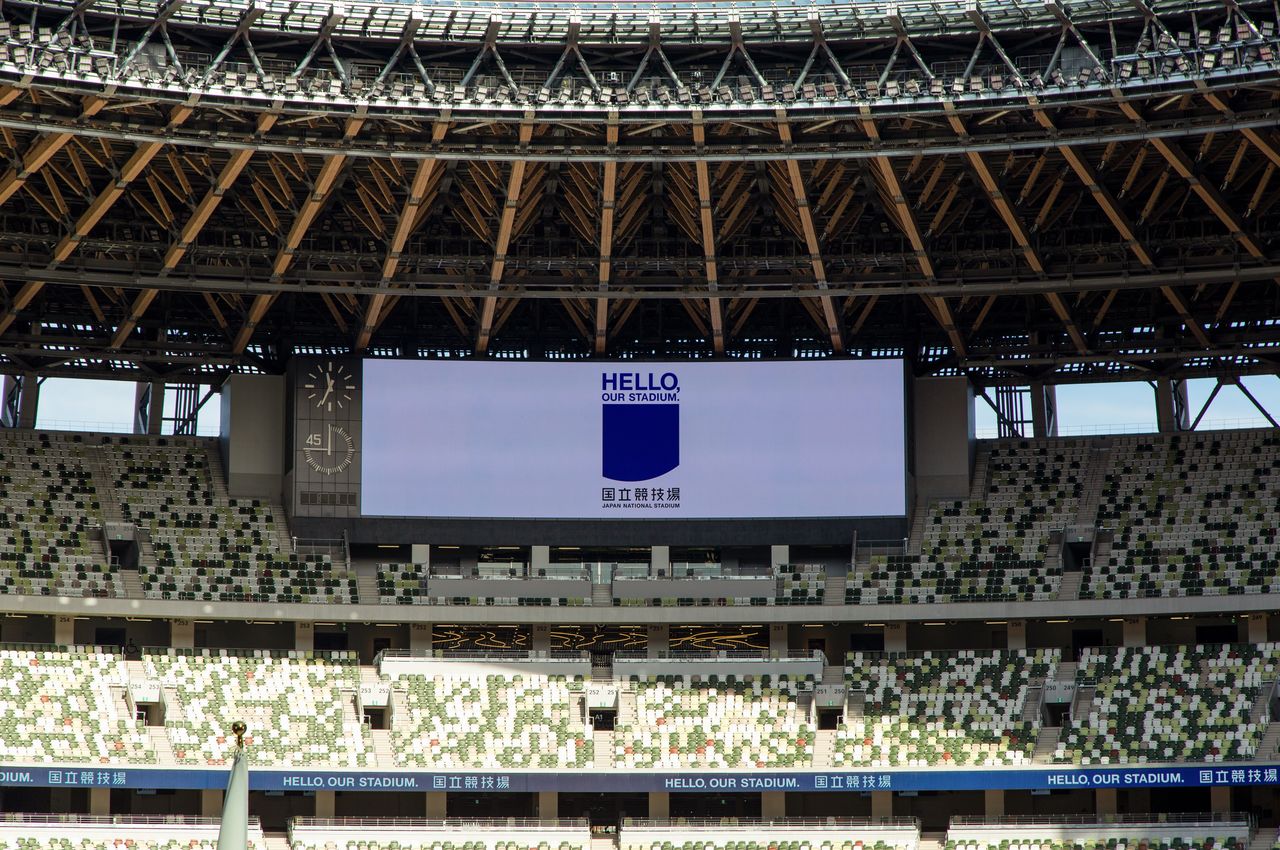 The stadium’s giant screens are 9 meters high and 36 meters wide. The ribbon board has a circumference of 640 meters. 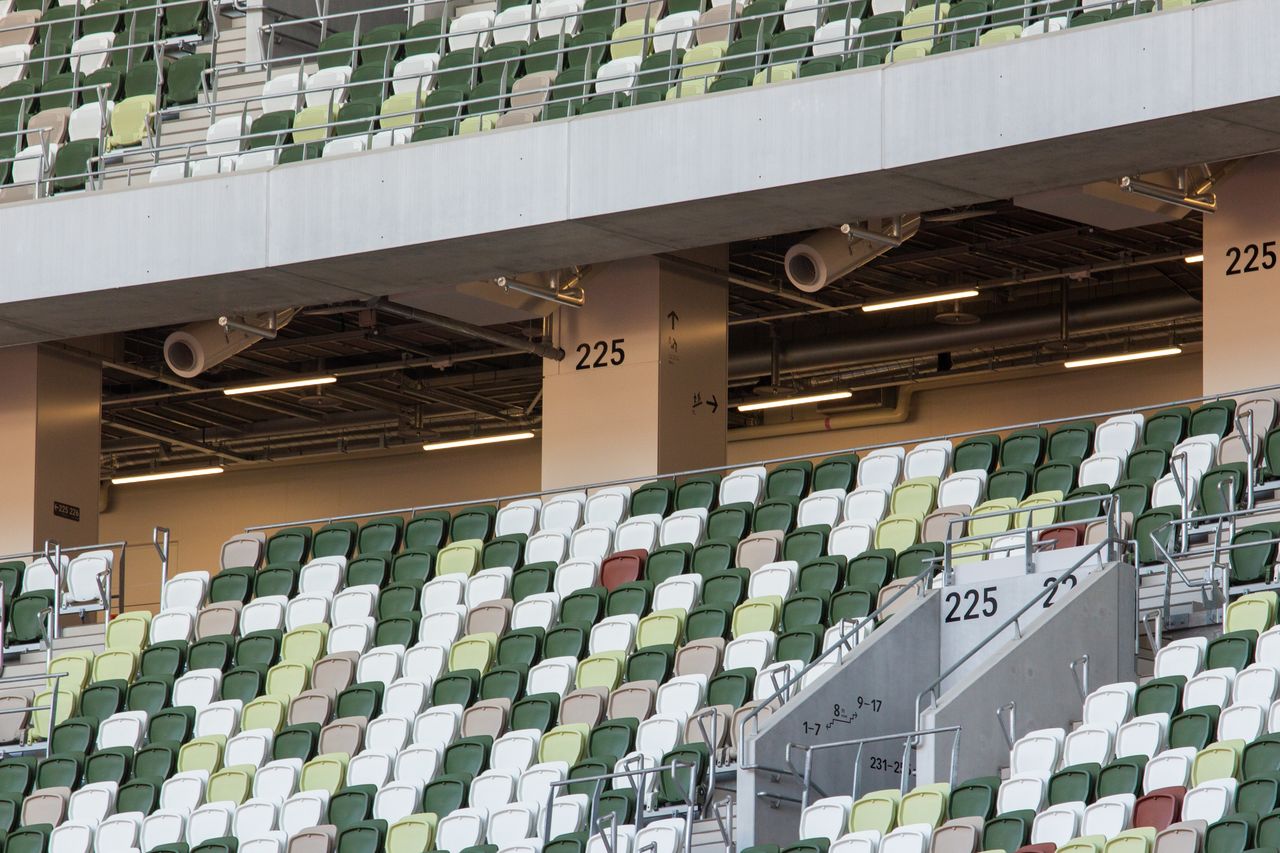 Fans keep spectators cool while creating an updraft over the track and field.

The National Stadium also boasts a high standard of universal design. To ensure that all spectators would be able to enjoy the Games in comfort, disabled groups and children’s advocacy groups were consulted throughout the design and construction process, and their input reflected in the final design. The stadium is designed with space for 500 wheelchairs, which will be boosted to 750 for the Olympics. Not only does this represent a significant increase over the former National Stadium’s 40 spaces, but the new stadium’s wheelchair seating is evenly distributed over all levels, rather than being clustered together on one side as is often the case, allowing those in wheelchairs to watch the competition from their preferred position and together with the able-bodied members of their party. 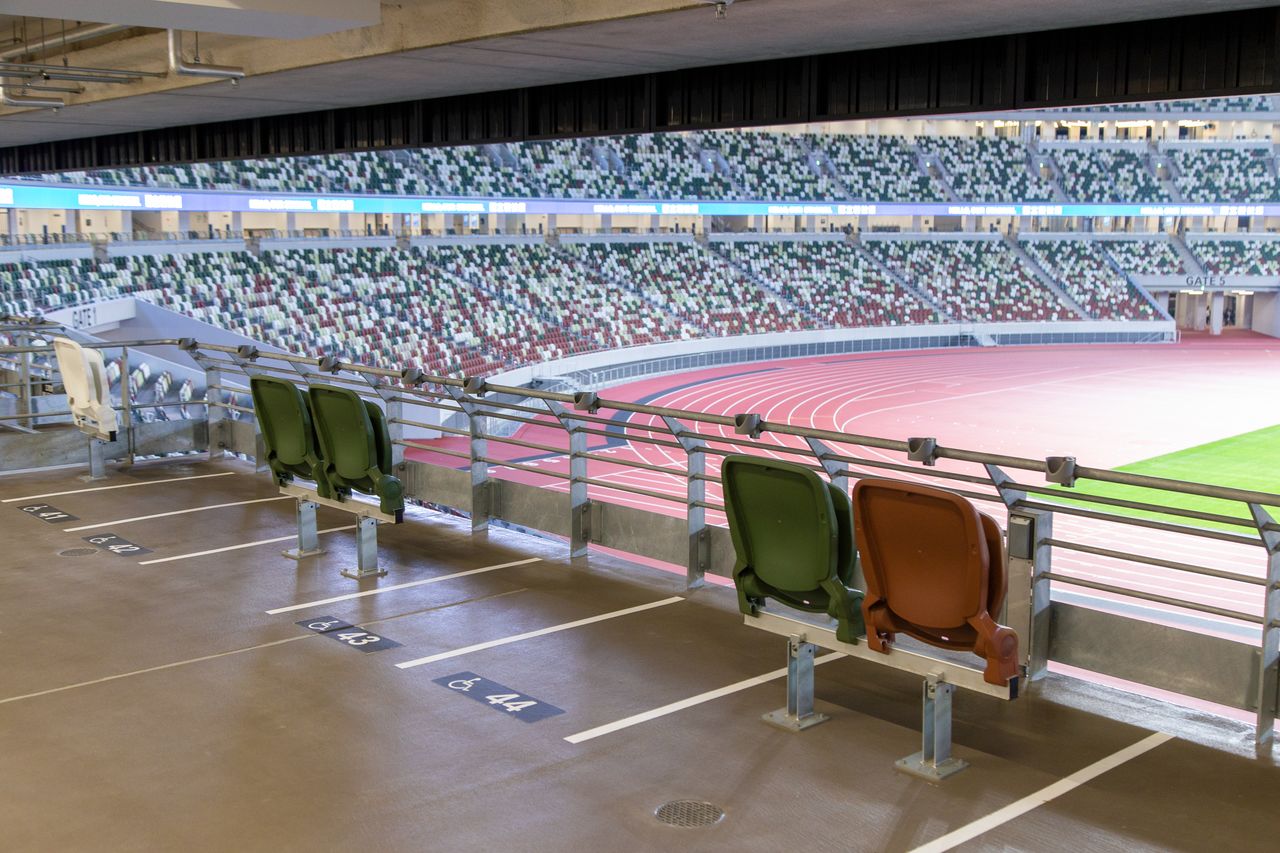 In the new stadium, pairs of regular seats are flanked by wheelchair spaces, so that those in wheelchairs do not need to be separated from their companions.

Gradients at entranceways and exits are gentle, and passageways barrier-free. The stadium is also fitted with tactile paving for the visually impaired and handrails throughout, and contains 93 toilets that are accessible by those in wheelchairs and those who have had colostomies.

Earthquake-proofing, also a subject of concern for any venue in Japan, has been achieved with the use of diagonal beams and steel bracing in the upper part of the structure for rigidity and a multitude of oil-filled shock absorbers in the lower portion. Stands and passageways have been designed to allow rapid evacuation in the event of an emergency, and the stadium is replete with emergency water tanks, a storeroom filled with emergency supplies, and a back-up generator. 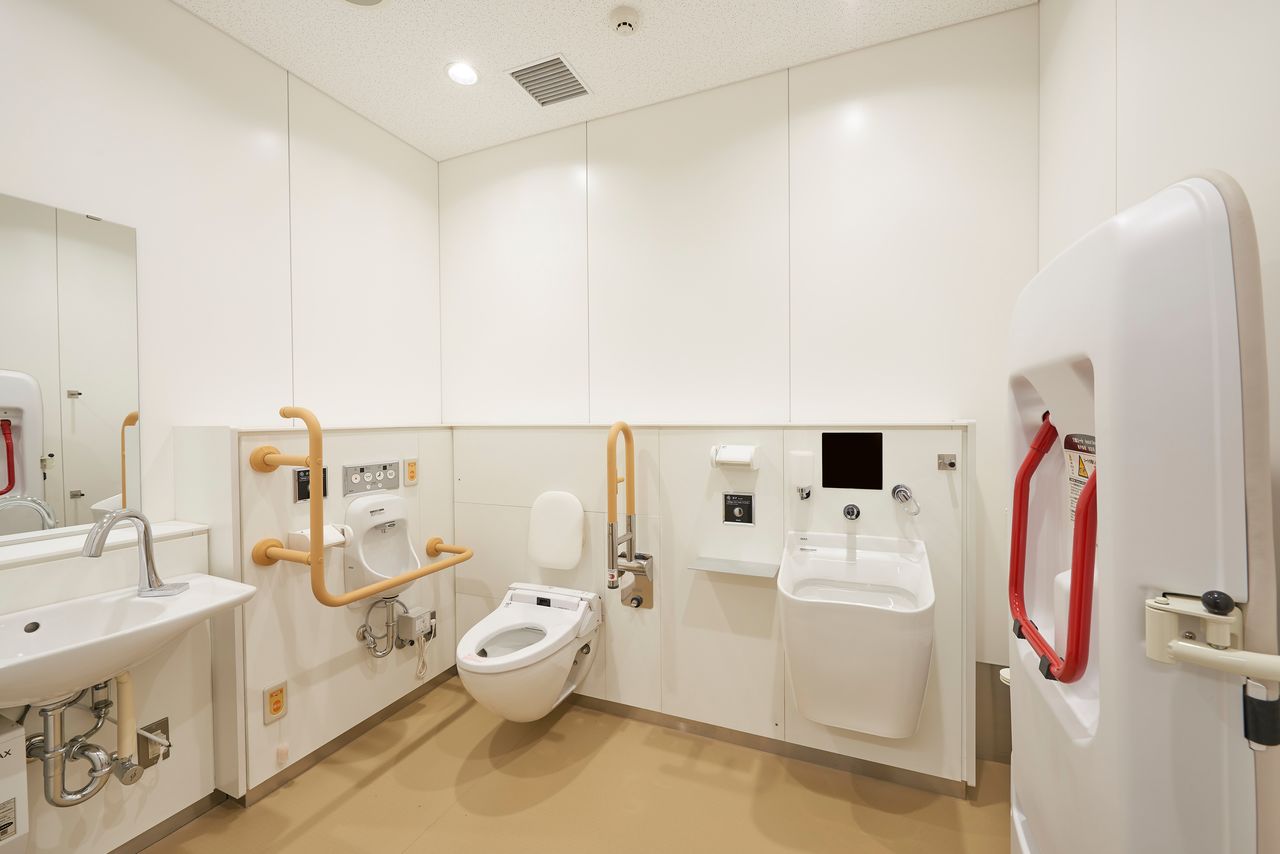 Wheelchair toilets are available for both left-handed and right-handed users. (Photo courtesy JSC) 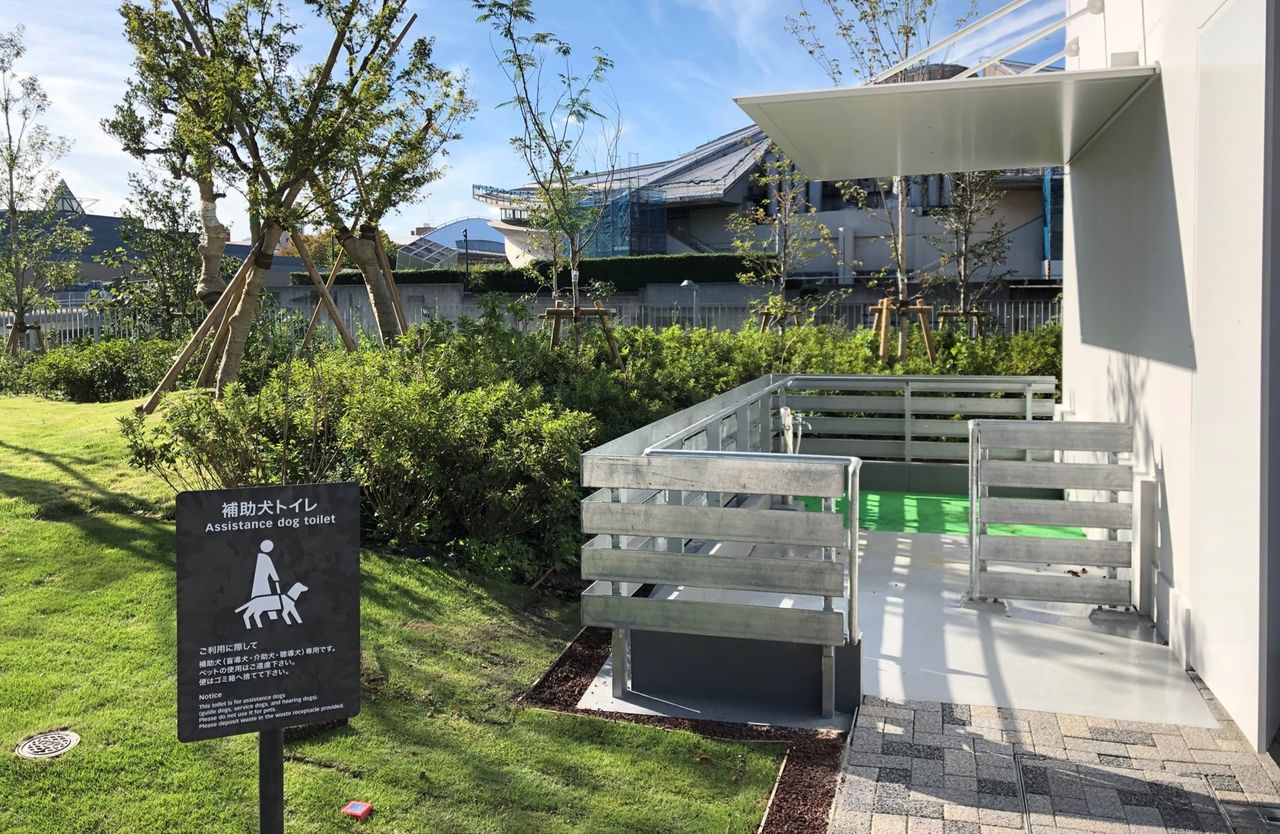 A toilet for guide dogs outside the stadium. (Photo courtesy JSC)

The 850 meter Sora no Mori, or “forest in the sky,” walking track encircling the top level of the stadium will eventually be made open to the public. While the stadium’s fate after the Games is yet unclear, its Japanese design, blending in with nature, means it is looks set to enjoy a legacy of successful competitions and be a favorite with the public. 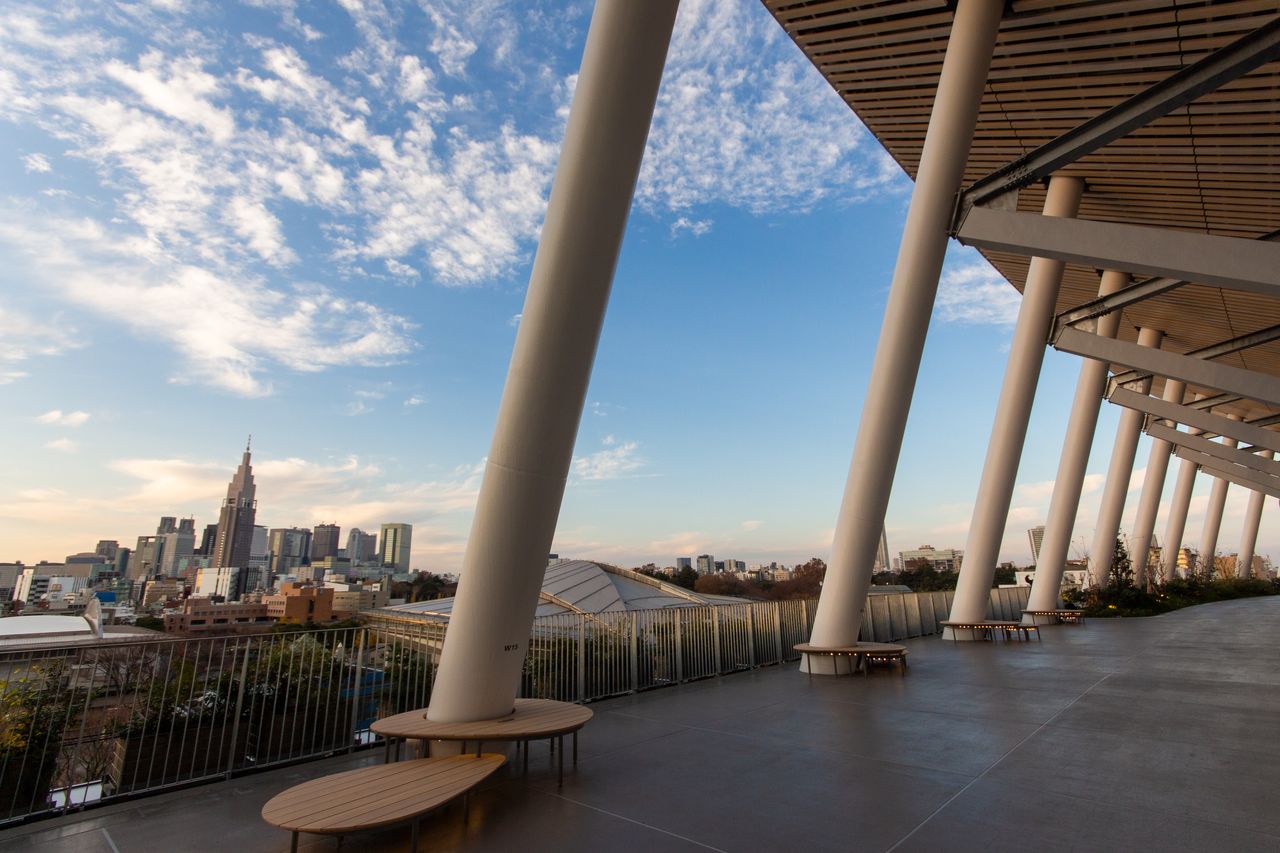 The Sora no Mori is accessible from outside and is likely to be popular with amateur runners. 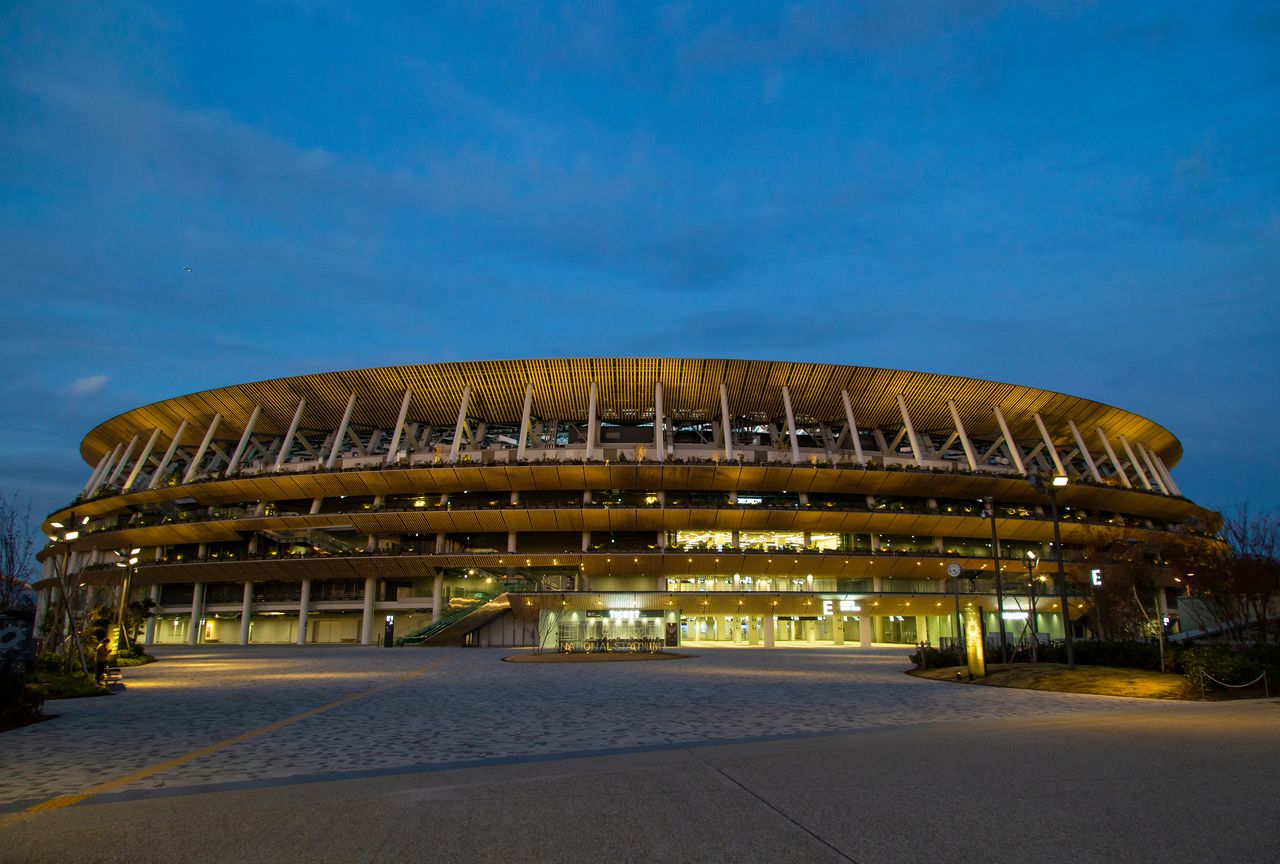 Amid talk of privatization, will the success of the Games enable us to see the stadium in a new light?