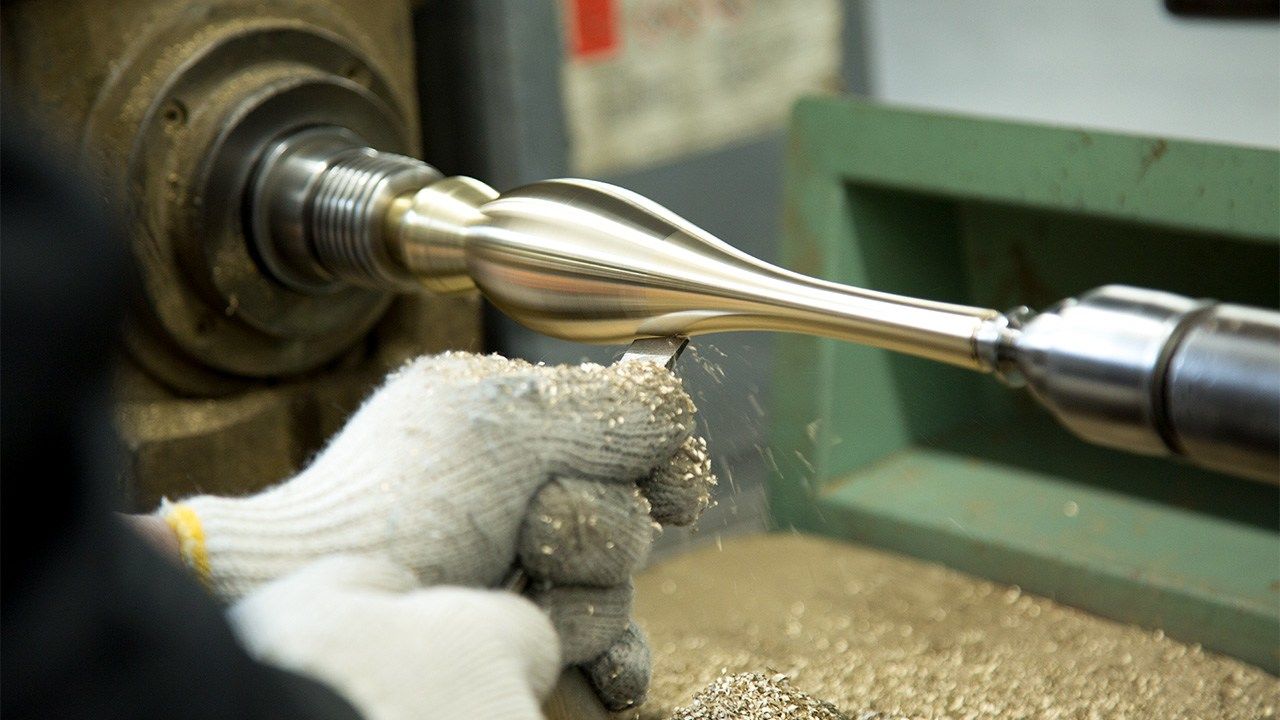 Economy Technology Work History Travel Jan 27, 2020
Every year, 120,000 people visit the Toyama factory of casting manufacturer Nousaku for its cafe, its workshop where visitors can make their own cast metal objects, and of course the opportunity to see craftspeople at work. Something of a “theme park” for metal casting, the facility aims to make the traditional craft of artisans something that children will look up to.

Takaoka is the second largest city in Toyama Prefecture. During the Warring States period (1467–1568), Takaoka was home to Takaoka Castle, built by the Maeda family of the Kaga clan. When Maeda Toshinaga, the second in the Maeda family to rule over the area, invited metalworkers from nearby villages to congregate in the town, it was the beginning of a casting industry that caused Takaoka to prosper as a commercial center.

These days, though, the story is different. Its population has fallen steadily over the last several decades and now stands at around 170,000, and many business premises in the city center are now shuttered. Takaoka is a typical example of a regional center in decline.

Twenty minutes’ drive from the middle of Takaoka, surrounded by paddy fields is a factory that seems much more lively, receiving a staggering 120,000 visitors every year. The factory belongs to cast metal manufacturer Nousaku. While the factory’s visitor numbers are not quite as high as those of the temple Zuiryūji, the most popular tourist spot in Takaoka with 170,000 visitors annually, this is still more than the 100,000 annually who visit the Takaoka great Buddha, which, alongside its counterparts in Kamakura and Nara, is considered one of Japan’s three great Buddha statues. In other words, the Nousaku factory is the city’s second most popular tourist attraction. In addition to domestic visitors, the factory also receives many visitors from China, the United States, and elsewhere. 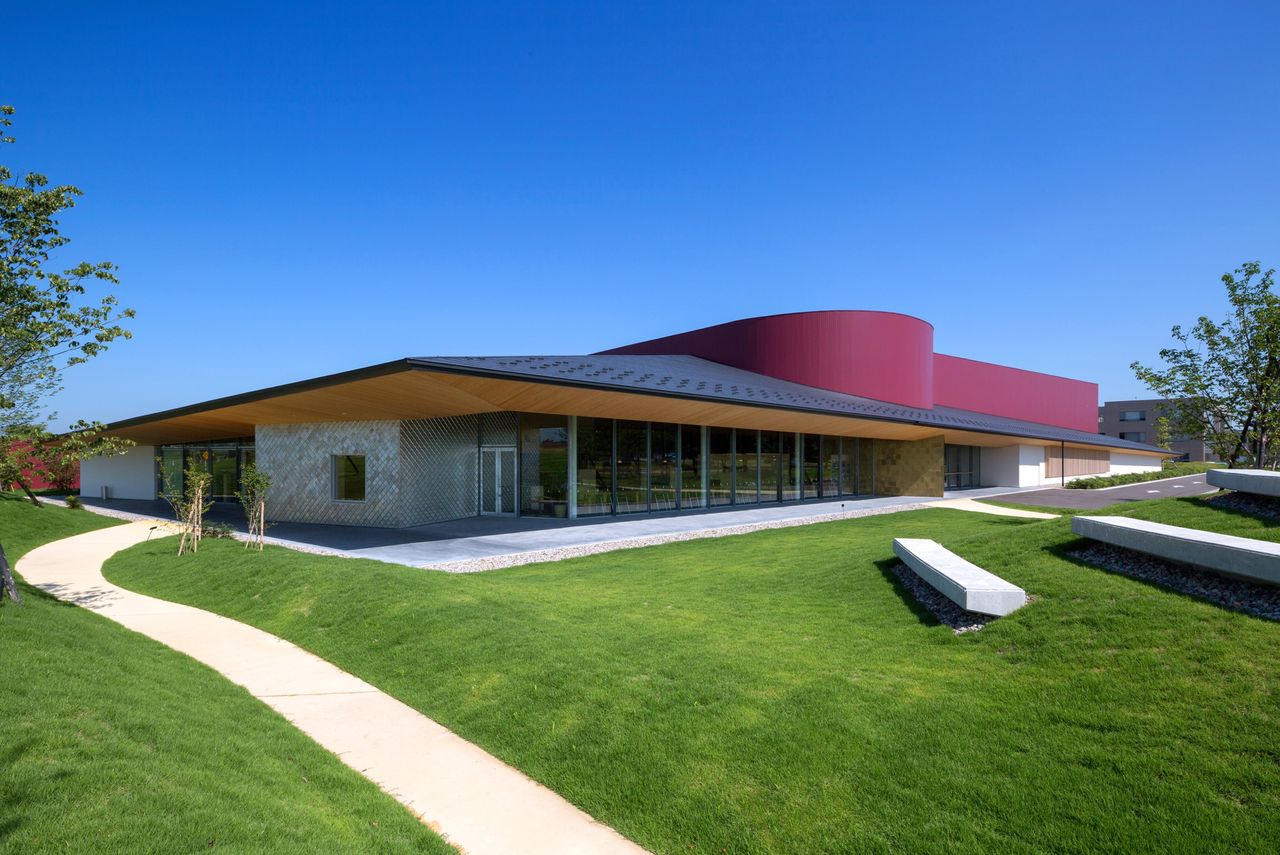 The new Nousaku factory aims to showcase traditional craftsmanship and the charms of Takaoka and Toyama. © Kurumata Tamotsu.

The unusual thing about this factory is that the manufacturing process is open to the public. Visitors can watch workers pour 1,100ºC molten metal into molds and then polish the finished castings on a lathe. 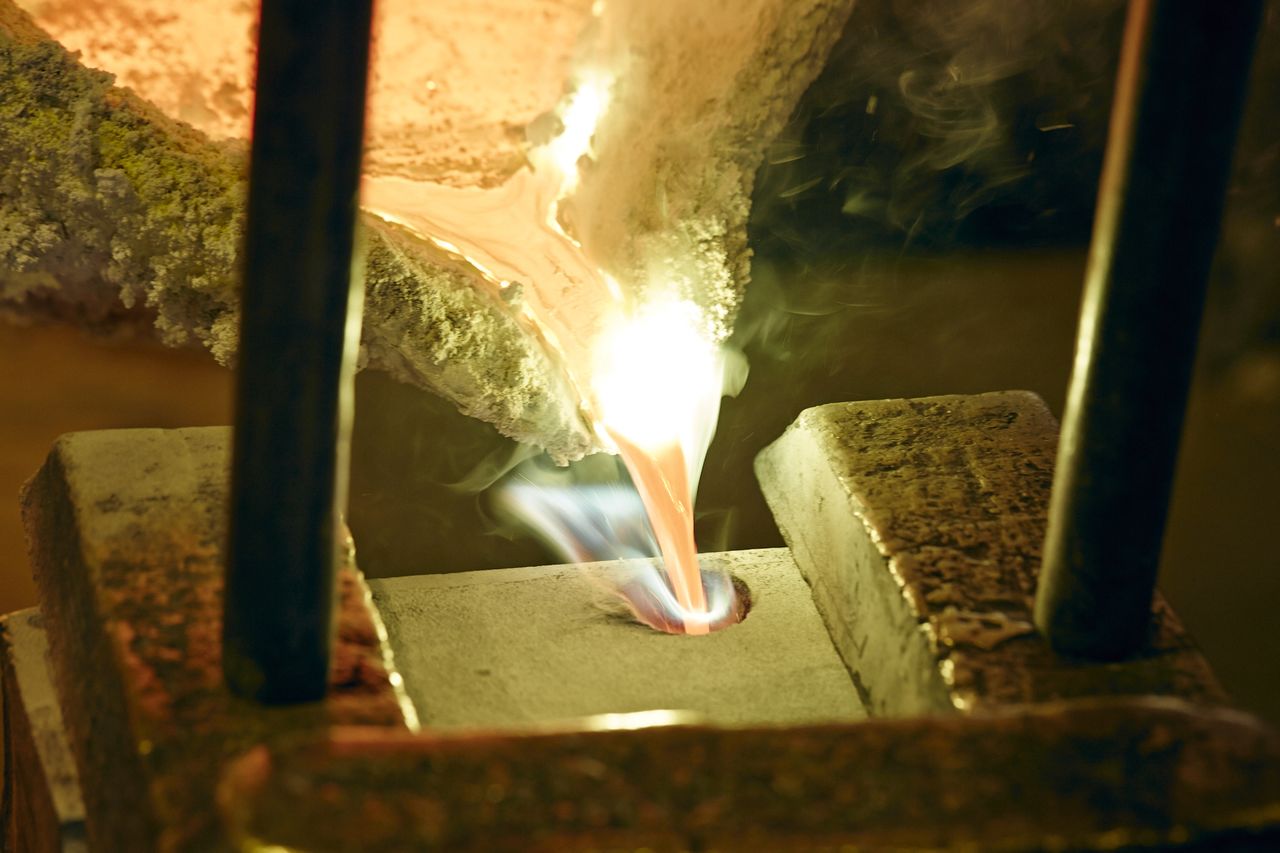 Red-hot metal is poured into a mold. 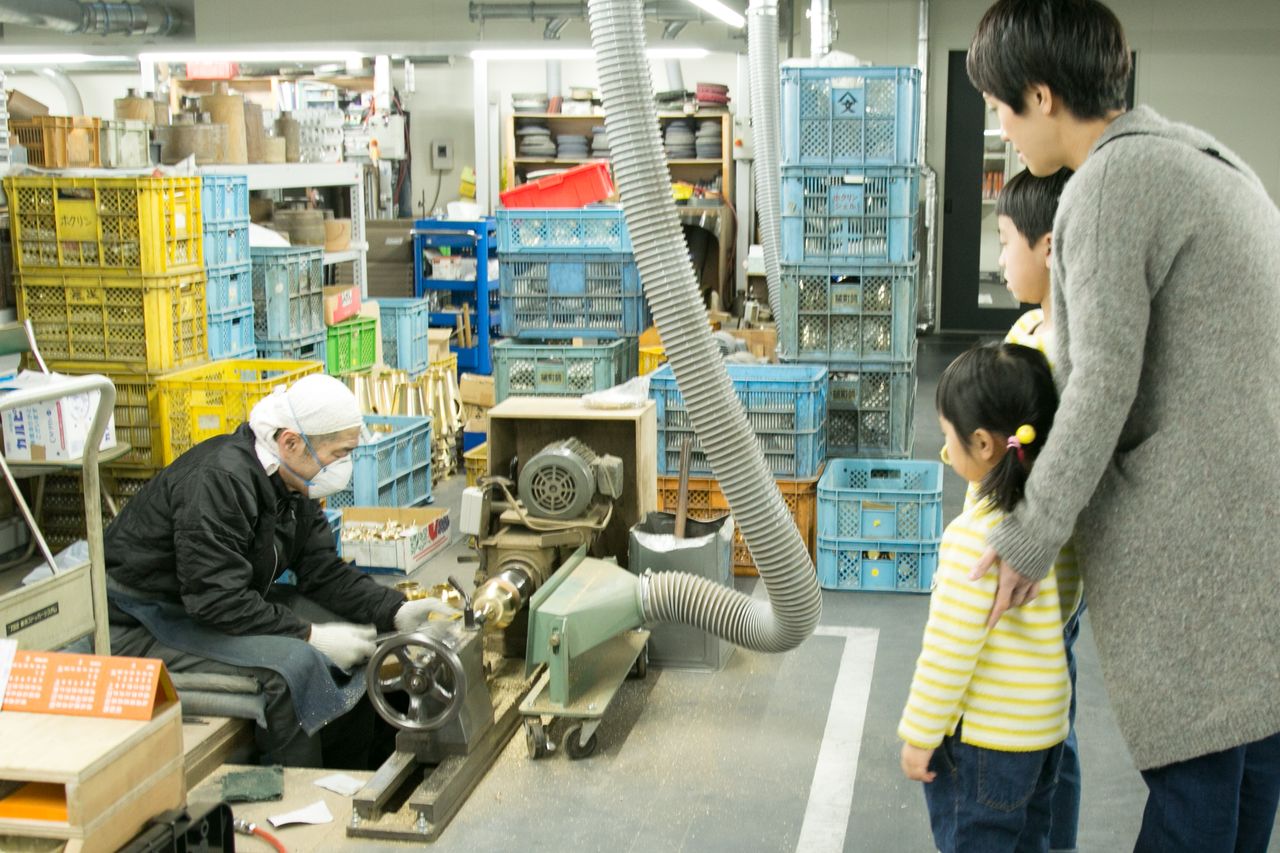 In an age when everything is about efficiency and productivity, visitors to the factory find themselves drawn to the beauty of the artisanal techniques employed here, all passed down from generation to generation since the Warring States period. The workshop where visitors get to make sake cups out of pure tin is also a hit, as is the cafe where you can enjoy meals made with local produce off Nousaku’s own cast metal tableware. It’s something of a theme park for cast metal. 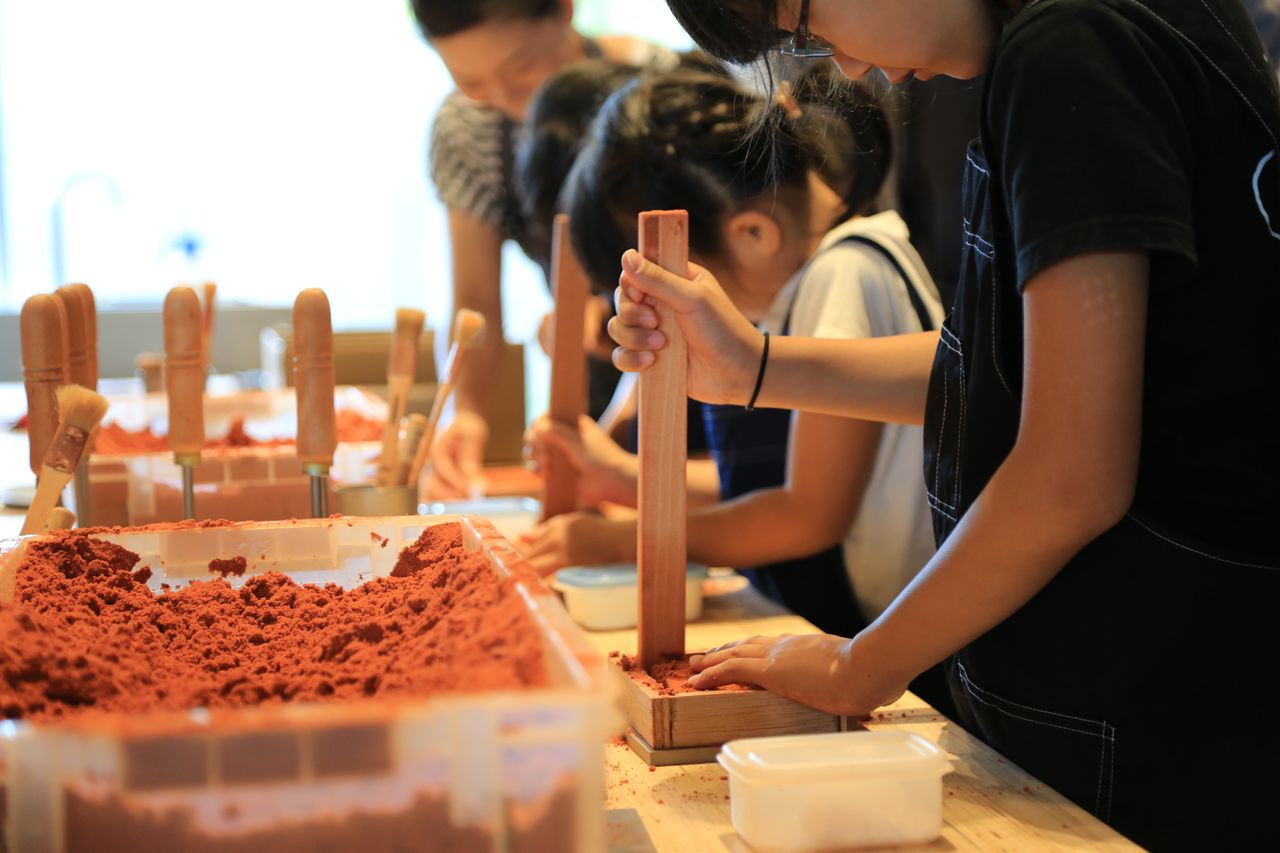 Workshop participants can have their own tin castings made by forming shapes in sand molds. 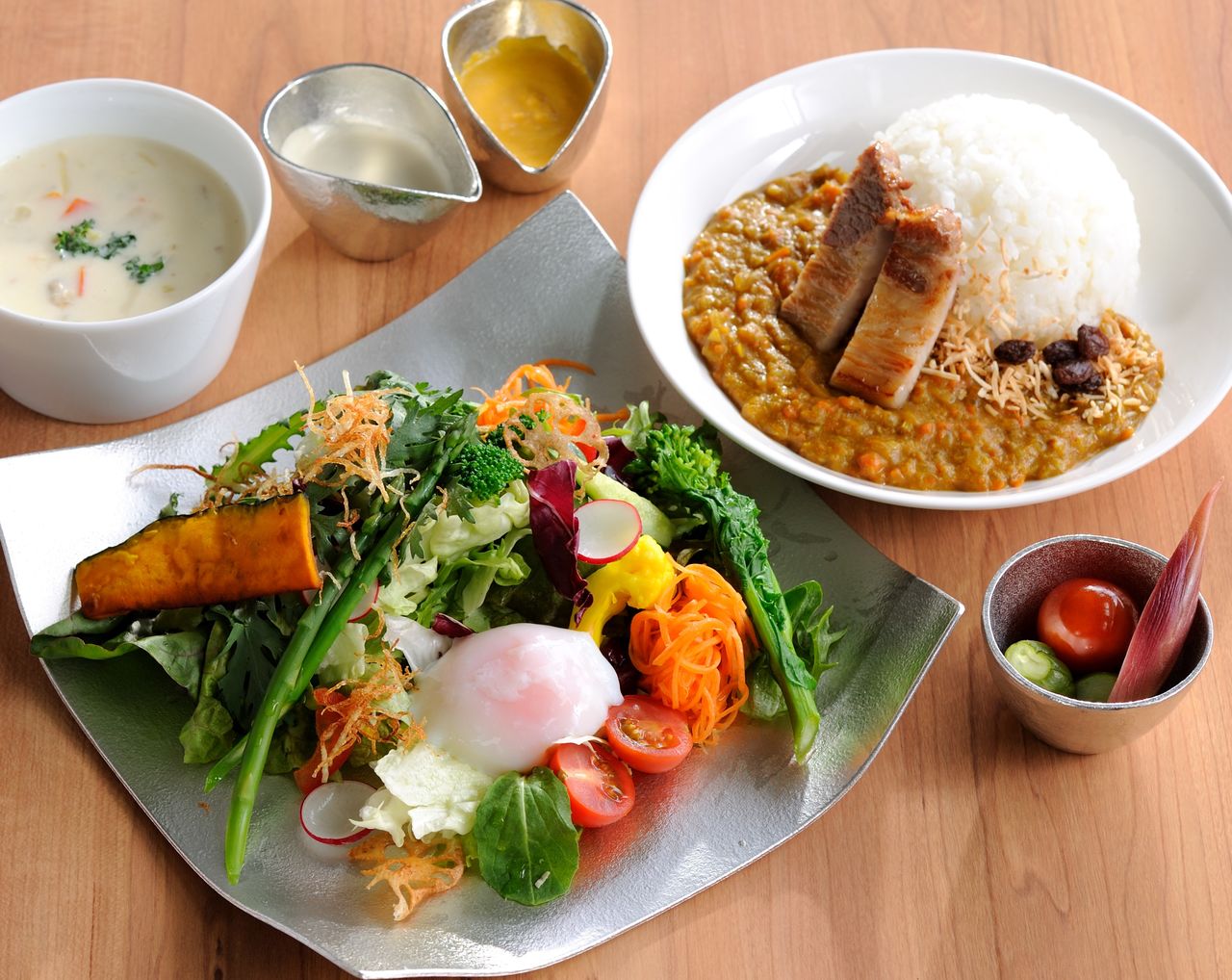 The cafe is a good source of ideas on incorporating metal tableware into your home.

The factory’s current buildings were completed in 2017. While Nousaku held tours before its recent relocation as well, annual visitor numbers were only around 10,000. In fact, it was a frustrating experience had by the family firm’s fifth president, Nōsaku Katsuji, that provided the catalyst for the tenfold increase in visitor numbers within two years of relocating.

Nōsaku Katsuji was an outsider. Born in Fukui, he worked as a photographer for a major newspaper before being transferred to Osaka, where he met the Nōsaku family’s only daughter. The two were married in 1984, and Katsuji, who took his wife’s name, quit his job to become a metalworker at his father-in-law’s company. While Nousaku now employs a staff of 150, back then there were only 8 employees. At the time, Nousaku was subcontracted by wholesalers to manufacture vases and various accessories for butsudan, the household Buddhist altars used to memorialize deceased family members. 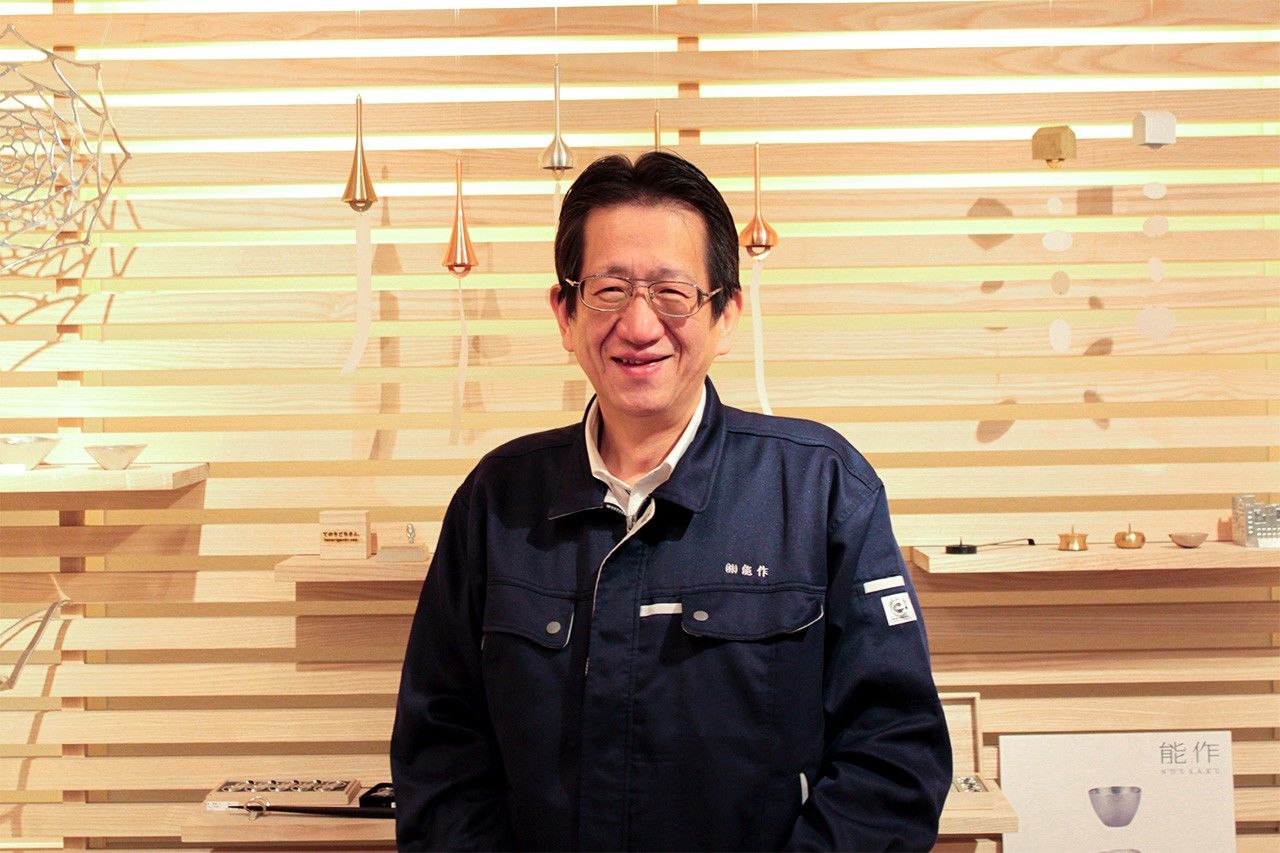 Katsuji describes an experience he will never forget. One day, a woman visited the factory with her son. Oblivious to the workers nearby, the woman said to her son, “if you don’t study hard, you’ll end up working somewhere like this.”

Katsuji was upset to realize that people looked down on traditional craft, and vowed to turn metalworking into something that young people would look up to. The experience made him even more determined to hone his skills. While the factory was profitable enough subcontracting for warehouses, Katsuji eventually became more ambitious. He wanted to have direct contact with his customers.

Katsuji would get his chance in 2001 when, after attending a masterclass in Takaoka, he gingerly showed the tutor a brass tea ceremony bowl that Nousaku had created. The tutor fell in love with the piece at once and invited Katsuji to participate in an exhibition. In the summer of that year, Nousaku created a brass dinner bell for an exhibition in Harajuku. Katsuji decided to leave the bell unpainted to show off the workmanship and the natural beauty of the metal. His idea worked: A buyer for a boutique noticed the bell, and in no time Nousaku had a contract to supply the shop. Despite having high hopes, however, Nousaku did not sell a single bell. The reason was simple—in Japan no one uses a dinner bell to call their family to the table. Katsuji realized that he was in a tough market.

To his rescue came salesperson with a helpful suggestion:

“Why don’t you make this into a wind chime? People will buy those.”

While Katsuji was not convinced that anyone would buy a wind chime in the age of air conditioning, the product was a runaway success. Katsuji marveled at the insight salespeople acquire from dealing with customers face-to-face. 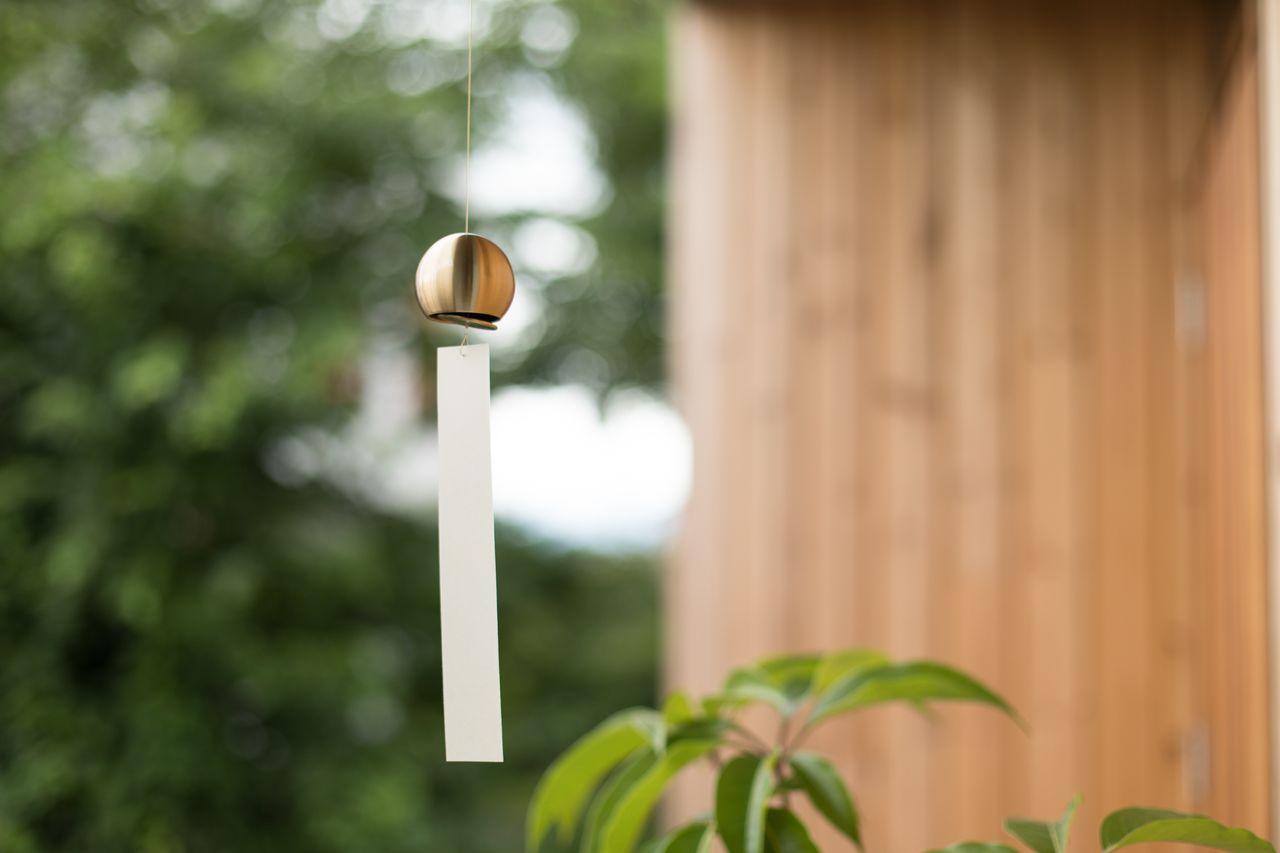 The windchime that put Nousaku on the popular retail map.

Nousaku’s next big leap was also inspired by a comment by a salesperson, who suggested the firm branch out into tableware. It would not possible to make utensils from unplated brass, as Japanese hygiene regulations require that all parts of brass utensils that come into contact with the mouth be plated with an inert metal. Tin was suggested as an alternative. A naturally soft metal, tin is usually hardened by adding lead or copper. However, the metalworkers Osaka-Suzuki and Satsuma-Suzuki had already achieved a level of recognition in hardened tin implements, so Katsuji, not wanting to imitate existing craft and reluctant to threaten other producers, decided to use pure tin instead. Nousaku would try something that no one else had attempted.

While the company successfully completed its first prototype, when workers tried to form it into shape, the metal would bend. Nousaku’s attempts to stop the bending were unsuccessful. After some time of getting nowhere, one of their designers suggested that they exploit the property, and make tableware that was designed to be bent. It was a “eureka” moment that led to the creation of the Magaru (bendable) tableware line, which rejects the assumption that metal needs to be rigid. This is now one of Nousaku’s best known lines. The attraction of the Magaru series is the surprising malleability of the pieces, which can be shaped by hand as desired, the utility of being able to adjust the shape to fit the contents, and above all the natural beauty of tin. 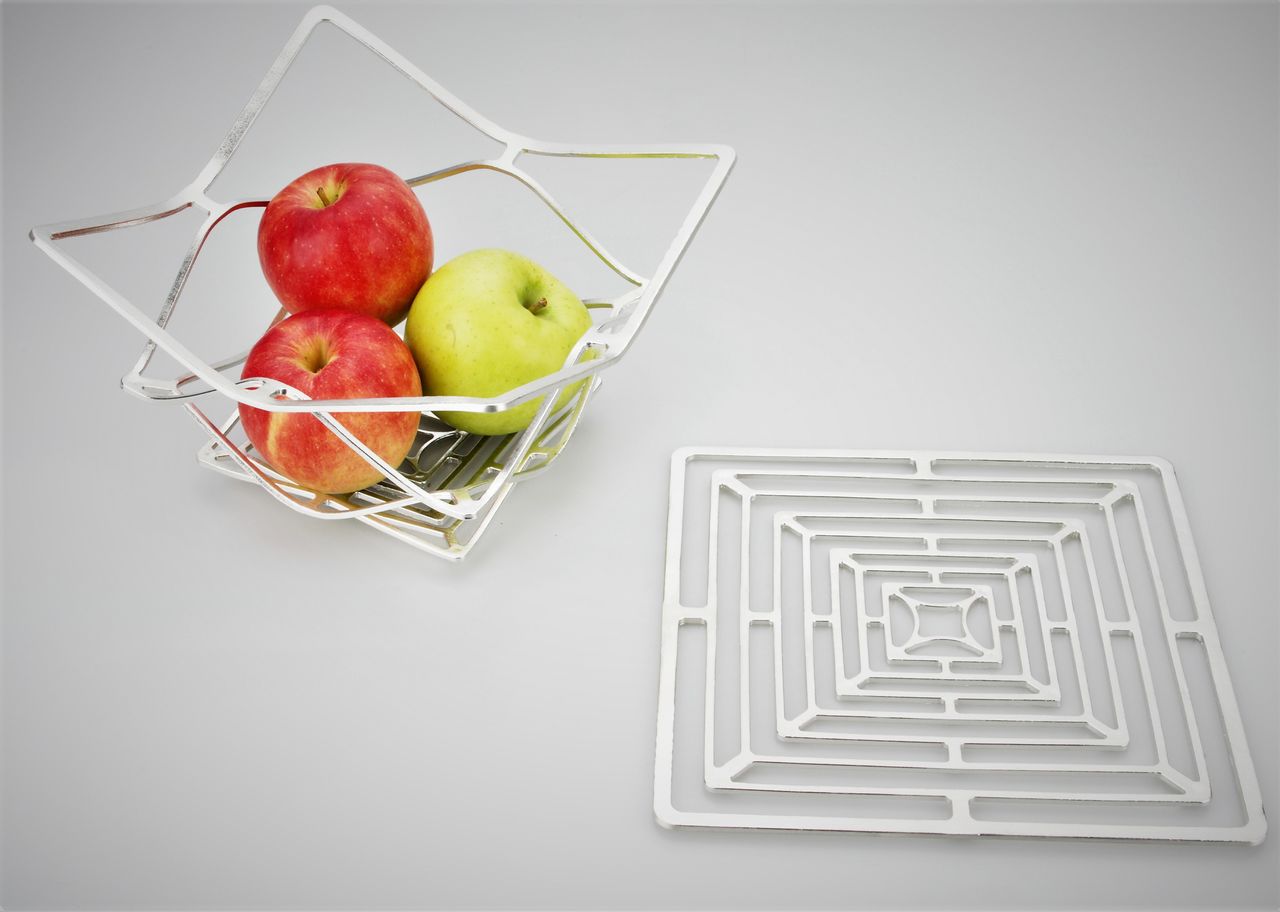 The Magaru line of bendable homewares can be bent into a variety of shapes to suit the application. 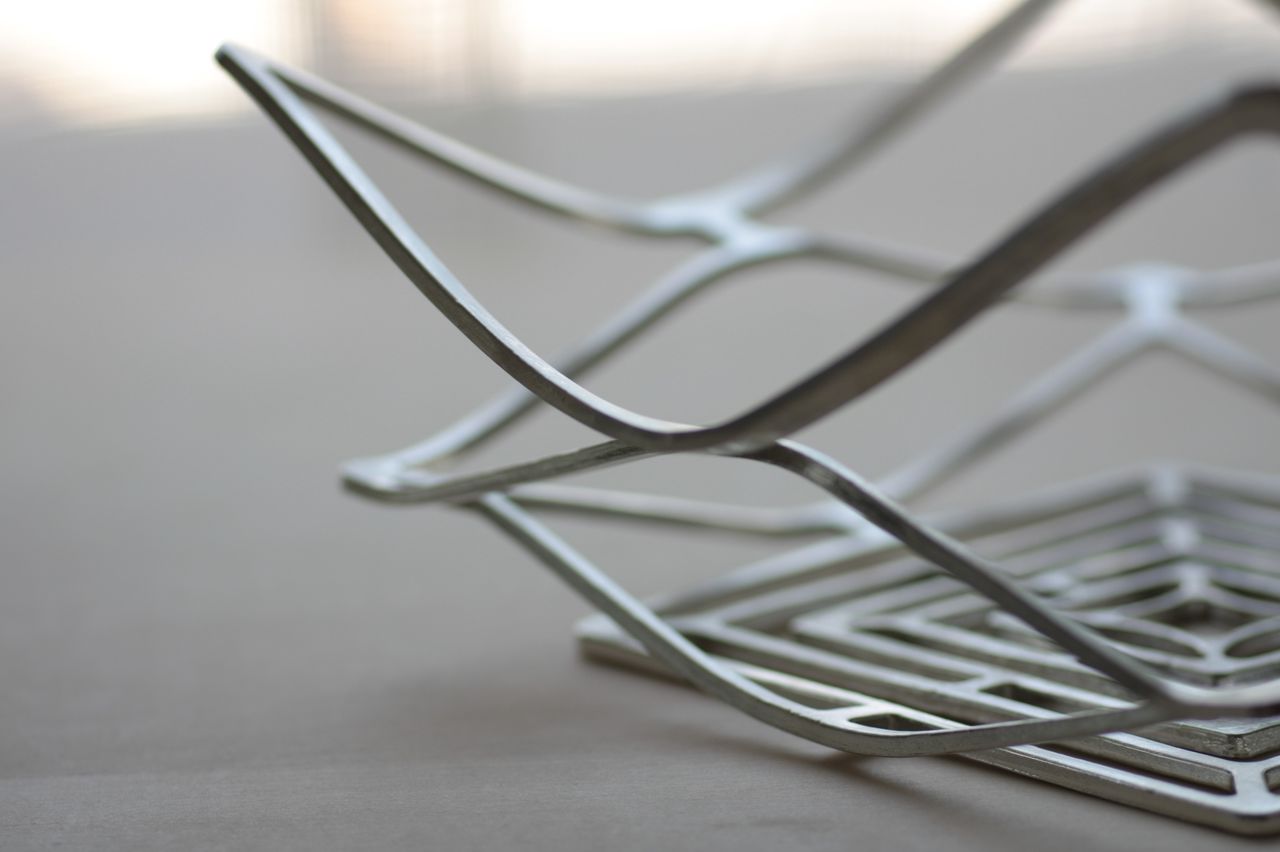 Magaru products can be easily formed by anyone. Popular as accents to rooms, they exude a warm ambience that is unusual for metal.

In addition to the Magaru line, Nousaku also makes other products that showcase the beauty of tin and brass. The simple, functional form of Nousaku’s beer mugs, champagne flutes, glasses, sake cups, and other implements are highly rated by professional chefs and used in three-star restaurants in Europe. Indeed, Nousaku has transformed itself from a subcontractor to a unique brand, and continues to make progress. No one visiting the factory will look down on its artisans now! 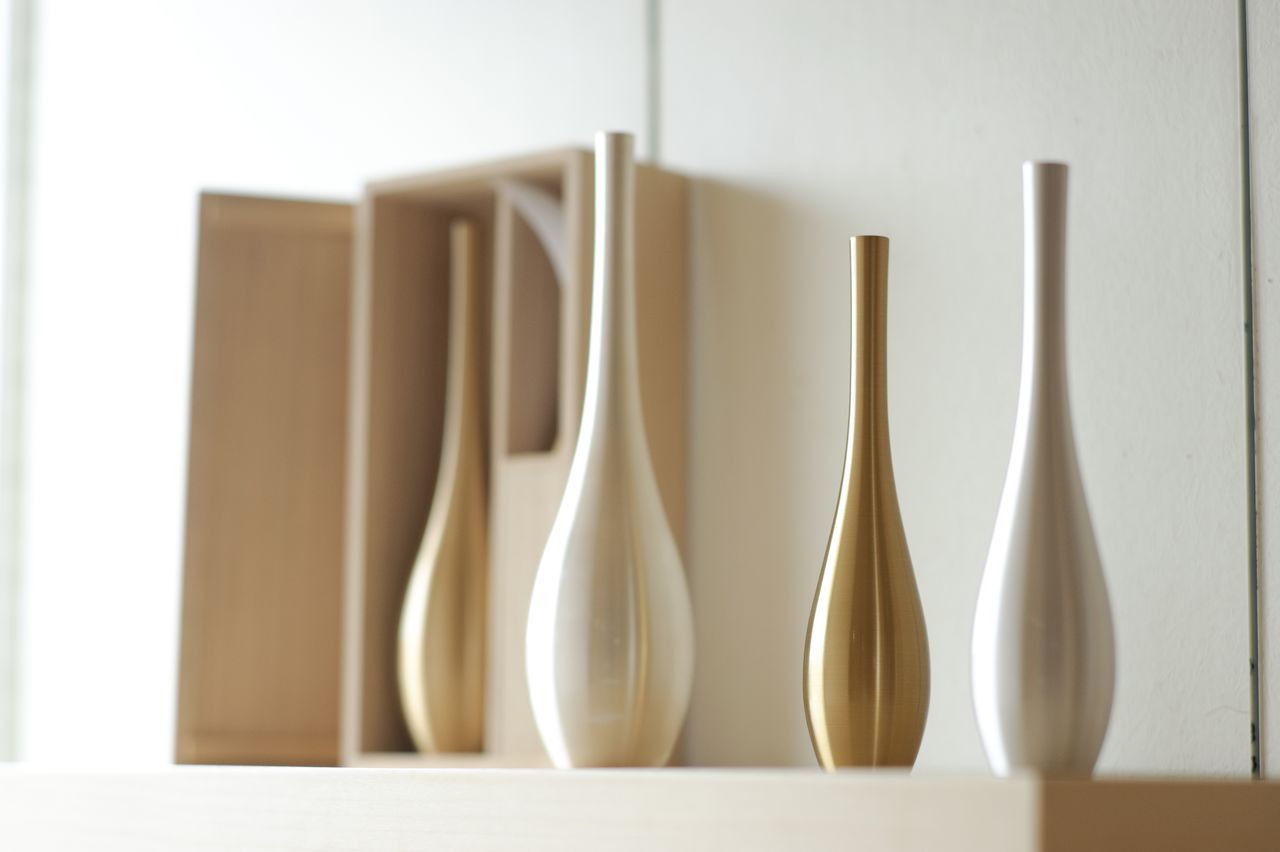 These vases have been polished on a lathe to bring out the inherent beauty of their metal. 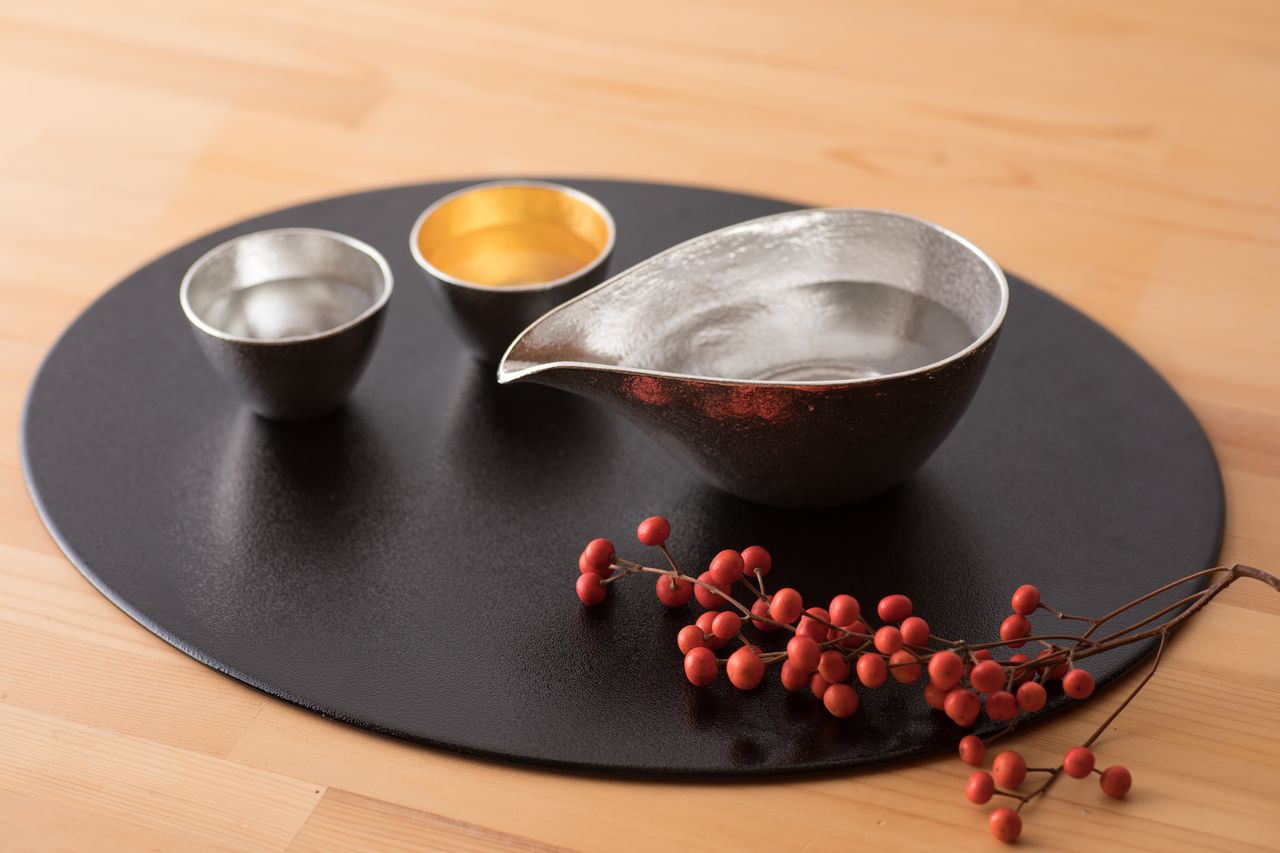 Katsuji reflects, “The idea that you can’t change tradition is wrong. You obviously have to keep traditions alive, but if you go on making the same thing forever, you will cause the tradition to die out.”

A must-see and popular photo spot on the tour route is a warehouse housing a vast number of wooden molds. These molds were had been left to gather dust at the back of the warehouse that was used before the factory relocated. While some of the wooden molds on display are no longer in use, these are all part of the history of Nousaku, and form the foundation of the brand. The way that these molds have been given a new lease of life is indeed characteristic of the new Nousaku.

“I came here as an outsider, but the Takaoka region made me what I am,” says Katsuji. “I have to create works that are loved by the people of Takaoka and that the region can be proud of.”

Nousaku opened its first high street store in Tokyo’s Nihonbashi district last autumn, as it takes its message from Takaoka to the world. 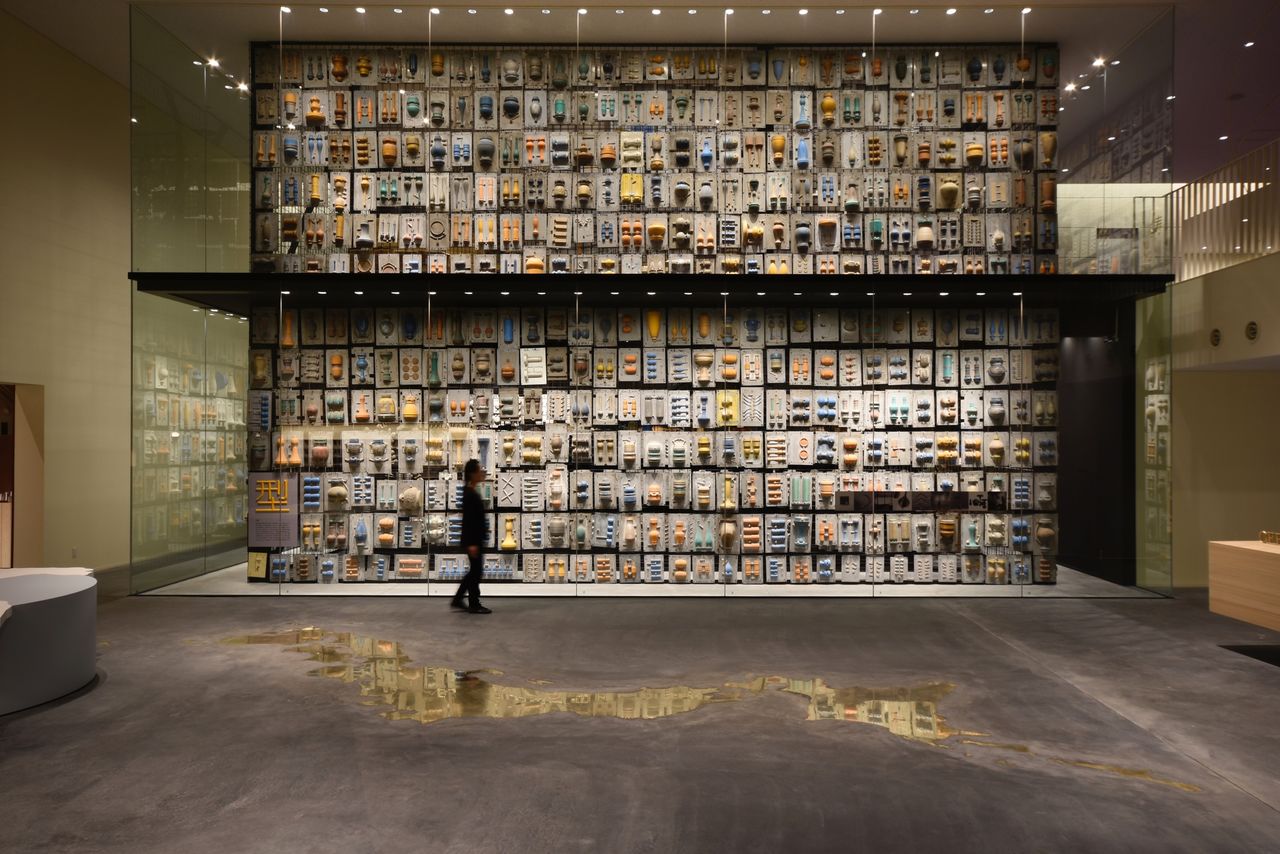 This display is made from disused wooden molds. The brass map of Japan in the foreground has been polished to a mirror finish.

(Originally published in Japanese. Banner photo: Polishing the surface of a casting on a lathe. All photos provided by Nousaku.)