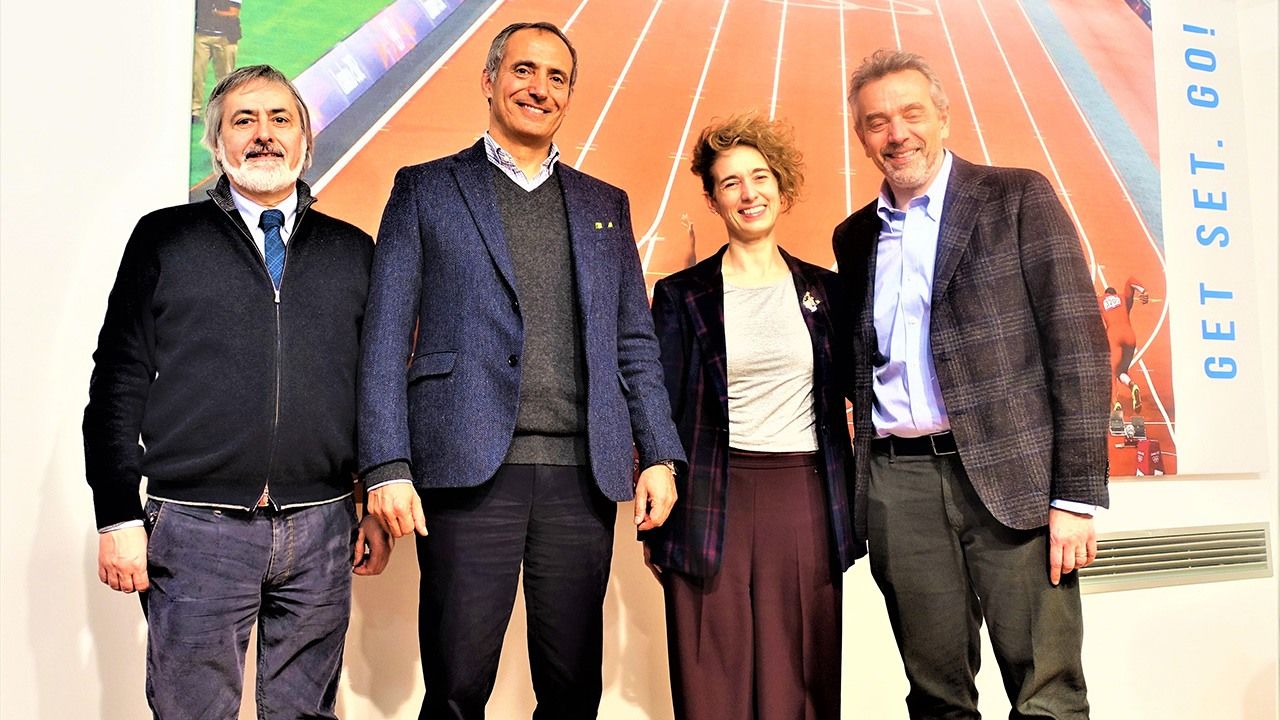 The Spirit of Italian Craftsmanship Behind Japan’s New Olympic Track

An Exceptional Company—Born of Regional Pride

The Olympic Games are the pinnacle of global sporting competition, supported by the latest technology. Japan’s newly built Olympic Stadium, the main venue when the games get underway in Tokyo in 2021, features a state-of-the-art track produced by Italian firm Mondo. Earlier this year, before the start of the ongoing health crisis, we visited the equipment manufacturer to talk about its industry-leading technology.

Mondo is located in the picturesque medieval town of Alba, the gateway to the UNESCO World Heritage-listed Vineyard Landscape of Piedmont. A 90-minute train ride from the regional capital of Turin, Alba is surrounded by sprawling fields that produce some of the Langhe area’s best wines, including the local specialty, Barolo. The district is also known for its white truffles that are a favorite of gourmands around the world. 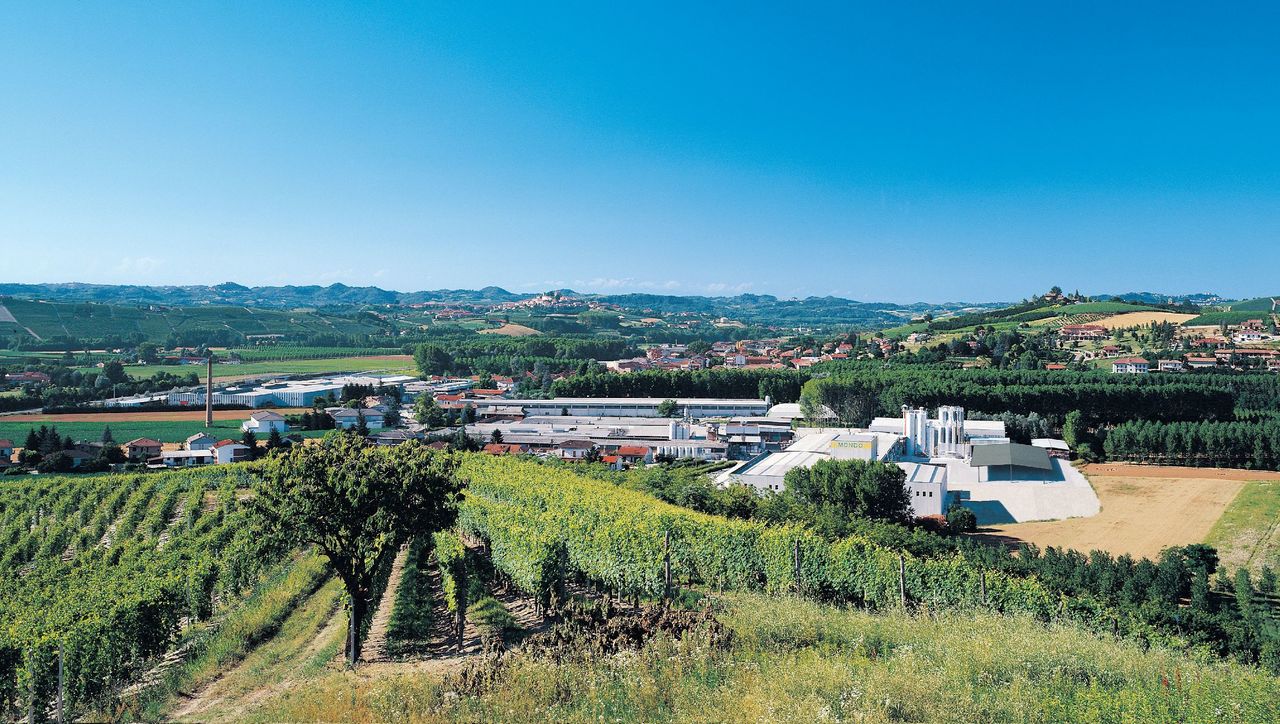 The Mondo plant sets among vineyards.

Mondo President Maurizio Stroppiana met us in the company’s showroom, offering us his warm thanks for traveling so far and welcoming us with an espresso and Alba’s famous torrone (Italian nougat), setting the tone for a congenial interview.

We started by asking Stroppiana why so many internationally recognized Italian companies are located in rural areas of the country. Mondo, for instance, is in a small city with a population of just 31,000. Why base it here instead of the commercial capital of Milan, or industrial center of Turin?

Stroppiana says that large, family-run companies in Italy are often founded in small towns, and local connections tend to keep them there. “I have a strong sense of love and pride for my hometown, so I want to live here forever,” he exclaims. He joyfully tells us that, thanks to the beautiful scenery, a number of large companies are headquartered in the area, including multi-national chocolate manufacturer Ferrero, maker of the popular hazelnut spread Nutella.

He assures us that northern Italians have a strong work ethic, contrary to the stereotypical view held by many in Japan. Staff at the Mondo research facility start work just after eight in the morning, and when they are busy, they readily work overtime and at weekends. However, Stroppiana asserts that when workers take time off, they relax completely, enjoying the natural settings with family and childhood friends, while savoring the local wine and cuisine. Perhaps it is this balanced lifestyle that is behind the company’s innovative ideas.

A Small-Town Company Takes on the World

Mondo takes its name from Stroppiana’s grandfather and company founder, Edmondo Giovanni Stroppiana. In 1948, Edmondo started a tire repair business with his two eldest sons, Ferruccio (who later headed the company) and Elio, father of the current president. The trio expanded their operation to include manufacturing rubber balls for the game pallapugno, a sport similar to handball that was growing in popularity at the time.

The brothers borrowed the oven of a nearby baker on Sundays, handcrafting the balls and selling them from their bicycles. The turning point for the company came in the 1950s when as a sale gimmick chocolatier Ferrero decided to offer rubber balls with their products. The company asked Edmondo to manufacture the toys, enabling him to acquire manufacturing equipment for his factory and to embark on full-scale rubber production.

In the 1960s, the inventive and ambitious Ferruccio and Elio embarked on a round-the-world tour to investigate market opportunities. They learned that the US company 3M had begun production of all-weather athletic tracks and resolved to produce their own. It was akin to David confronting Goliath.

In 1976, Mondo established its first overseas plant, in Montreal, Canada. With French being the official language of the state of Quebec, the company felt it was easier to adapt, due to the French influence in Alba. Mondo was chosen as the official supplier for the Montreal Olympics athletic track in 1976. Since then, the firm has supplied the track for each Olympics, with Tokyo being the twelfth. 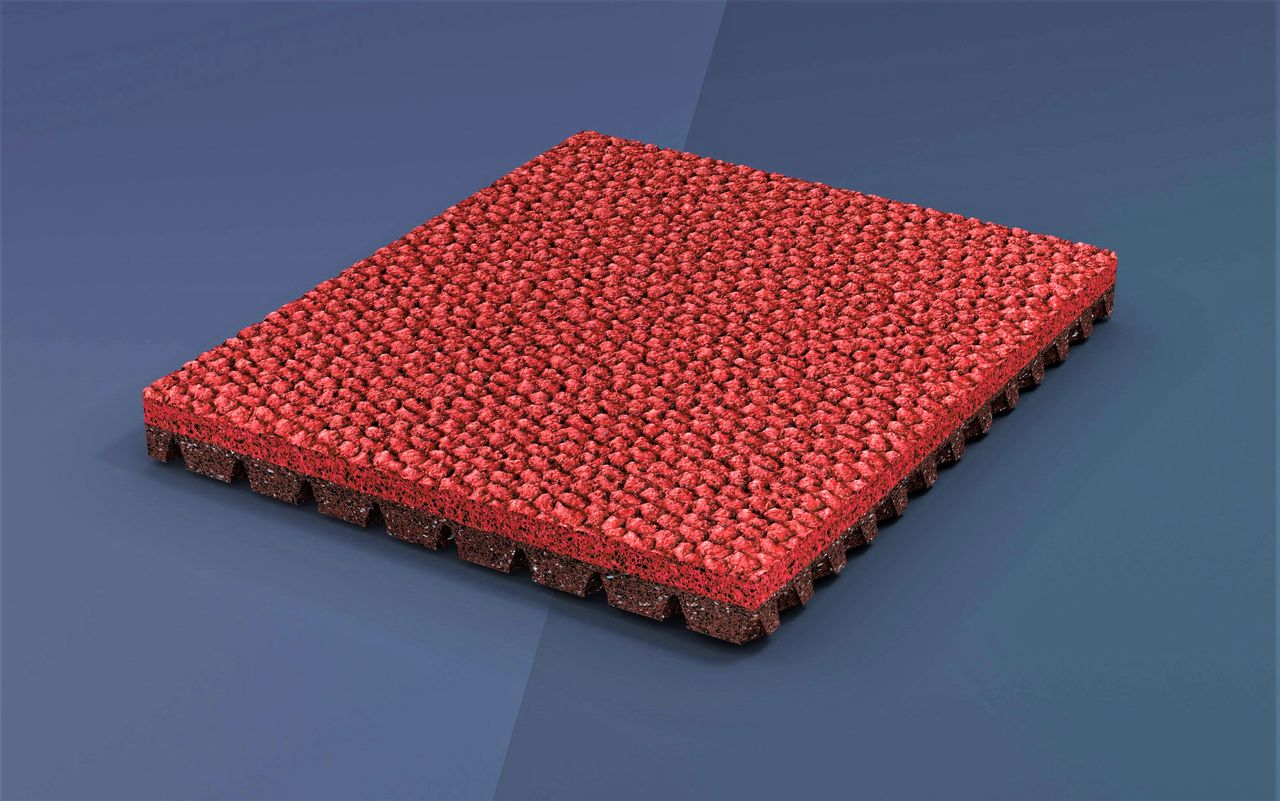 A cross-section of Mondo’s track.

What makes Mondo’s surface so special? Tracks are often constructed from polyurethane​, but Mondo is very particular about using rubber. Andrea Vallauri, the firm’s Olympic project manager, says that this is because of rubber’s uniformity and eco-friendliness.

Production of polyurethane​ surfaces requires that the component solutions be combined on-site and poured like concrete, increasing the likelihood of unevenness. Mondo, on the other hand, manufactures all of its rubber sheets at the plant. Their expert staff use the latest equipment, combining the base materials with other chemicals while closely monitoring the quality, including thickness and firmness. Sheets are rolled like carpet for delivery to the field, where they are laid upon the asphalt surface. The sheets are also more environmentally friendly as they can also be removed and reused at different sites.

A two-layer construction is the secret behind the high-speed surface. The upper layer uses rubber granules with a polymer for optimized elasticity, offering dynamic response twice that of polyurethane​. The surface of a rubber track is more uniform, helping athletes control their stride lengths without the need to adjust their posture and reducing fatigue. The surface also employs a mosaic design that makes it suitable for athletes using new-generation, pinless spikes.

The lower layers have a honeycomb pattern of elongated, air-filled cavities that deform under pressure, producing elasticity. The hexagons are arranged lengthwise, corresponding with the running direction, minimizing impact when the athlete's foot makes contact while converting elasticity into propulsive power. Previous tracks used a quadrilateral shape, but since the 2012 London Olympics, Mondo has utilized a hexagonal pattern that absorbs impact from any direction.

The high-speed track provides optimal results in sprints, hurdles, jumping events, and the javelin. At the 2016 Rio Olympics, 75% of the World Athletics-recognized indoor and outdoor world records were achieved on Mondo surfaces.

Everything is for the Athletes

Nevertheless, Mondo faced an uphill battle to gain the contract for the Tokyo Olympics. Stroppiana says the firm was very honored to be selected to provide the track for the new Olympic Stadium, but insists that it was their toughest struggle yet. The company found it difficult to convince the Japanese side of how much Mondo had improved the performance of their product. “It required much time and determination on our part,” he says.

The biggest issue was whether or not the track could withstand the intense heat of summer in Japan. Compared with polyurethane​, rubber is more susceptible to ultraviolet rays, forming cracks and deteriorating. Mondo launched its Tokyo Olympics project immediately following the Rio games, aiming to achieve the high level of quality required by the Japanese side. The company invited technical experts from its main Japanese dealer, Osaka-based Kuriyama Corporation, to Alba to undertake various joint-research. Together they worked on new compounds and successfully developed a more advanced track with double the weather-resistance of their conventional surface.

In addition, the team conducted joint tests with shoe manufacturer Asics to verify the performance of the new track and sought feedback from top-level athletes. Mondo Sales and Marketing Director Francesco Bonanno Gaetani explains that it is impossible to jump straight from the research laboratory to the field: “Our motto is—We listen. You win.”

The company’s environmental protection initiatives were also a deciding factor in triumphing over Japanese rivals. When Mondo produced their first track in 1972, they already led other companies in deciding against using mercury in the manufacturing process. The company was also ahead of the curve in promoting recycling and reuse. Stroppiana believes that the company’s approach matched that of Kuma Kengo, who designed the Olympic Stadium with the concept of a “shrine grove” to suit the natural environment of Meiji Jingū Gaien, the outer gardens of Meiji Shrine near the new venue.

Mondo hopes that its track for the Tokyo Olympics will see many new world records, but Gaetani says the company wants all competitors to shine: “Our ultimate aim is that the athletes who compete are able to realize their personal best.”

Custom-made products have attracted controversy, such as the thick-soled shoes by shoemaker Nike that were recently in the news. Gaetani’s believes that athletes using footwear that is not commercially available runs contrary to the sporting spirit. But he points out that with Mondo’s track, all athletes enjoy the same advantage. His countenance imparting the will power and confidence of a true maestro, he exclaims, “We aim to fulfill everyone’s hopes in Tokyo.” 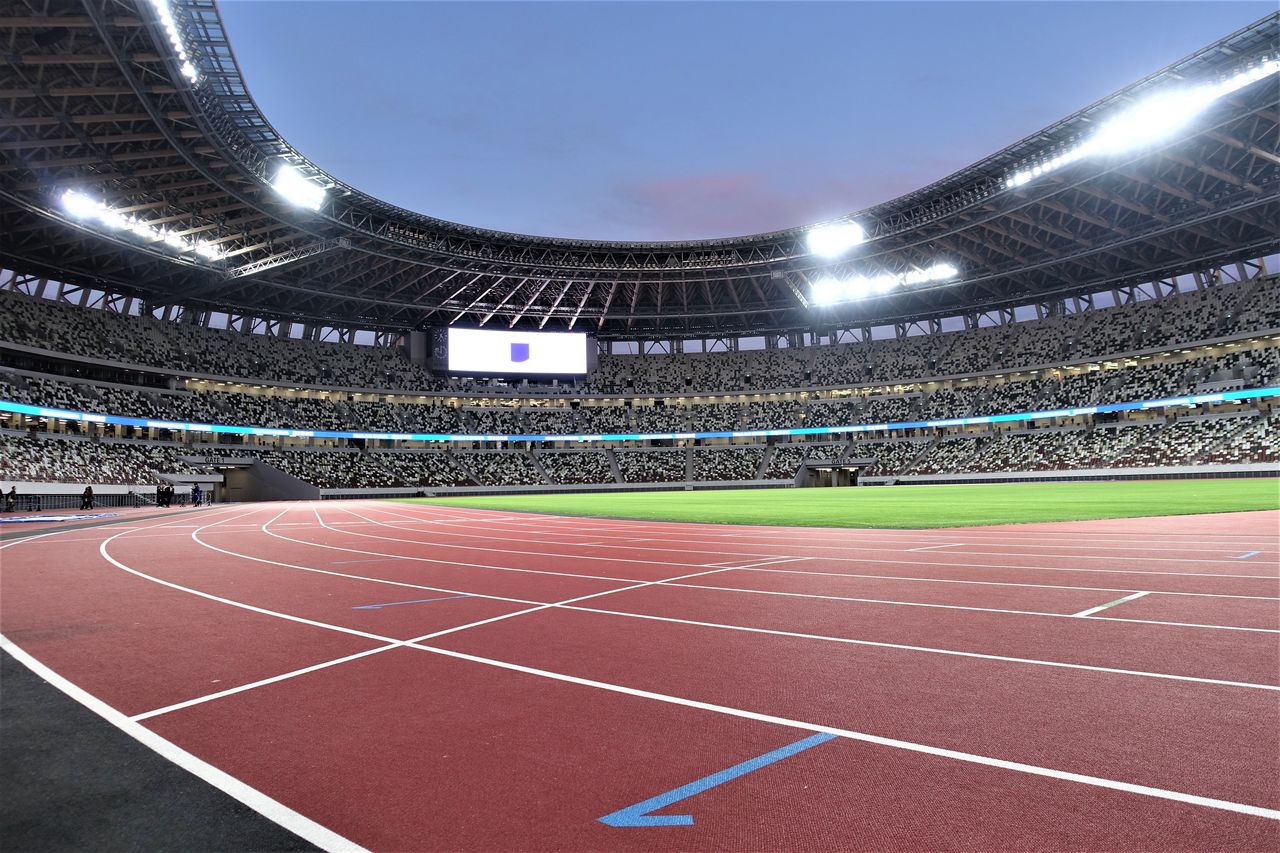 The track of the new Olympic Stadium.

(Originally published in Japanese. Banner photo: Mondo president Maurizio Stroppiana [far right] and his staff. All photos by the author.)