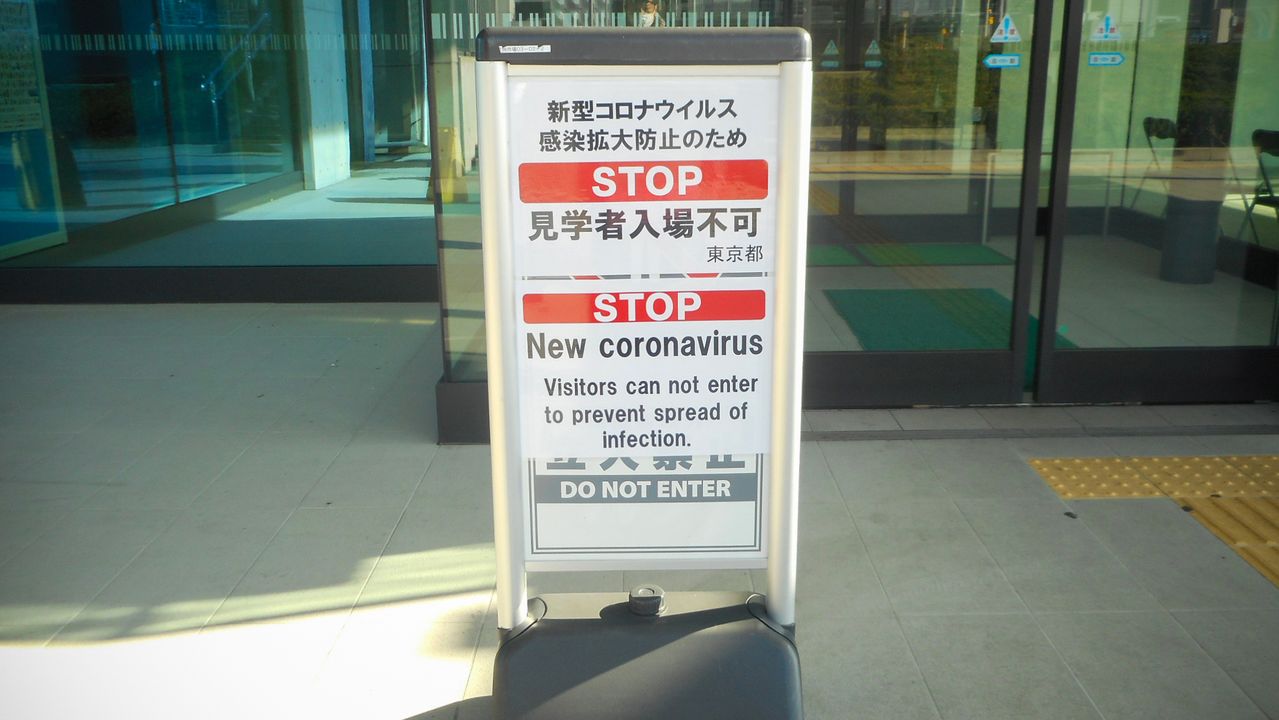 Economy Work May 28, 2020
Toyosu Market, the capital’s wholesale food-supply hub, is feeling the impact of the COVID-19 pandemic. Public entry has been banned, while sales at restaurants and other businesses are plummeting. As a result, prices for high-grade fish that do not normally make it to supermarket shelves have dropped, putting them in reach for family dinner tables.

The ongoing COVID-19 pandemic has caused worldwide disruption, and Japan is no exception. On April 7, Prime Minister Abe Shinzō declared a state of emergency for seven prefectures including Tokyo, on April 16 extending the declaration to the entire nation of Japan. The government has urged citizens to avoid going out, and to reduce contact with others by 70% to 80%.

Toyosu Market, a wholesale distribution hub for fresh food from inside and outside Japan, has been designated an essential business, so work continues uninterrupted. Every day, hundreds of kinds of seafood are still processed there, but even so, there has been a marked change in the level of activity.

A ban on public entry has ended the huge amount of foot traffic that once filled the space, as well as the private sales it brought. “Sales are at their lowest point since the Great East Japan Earthquake,” says one wholesaler. Staff at the market often give off an aura of boredom as they stand waiting for the business customers that still come, but even those are few these days. The pandemic-related closing of many up-market restaurants, including sushi shops in Ginza and those in the market itself, has led to a collapse in demand for high-end seafood. However, while the market is reeling, for average consumers the situation has put typically high-priced fish much closer at hand. 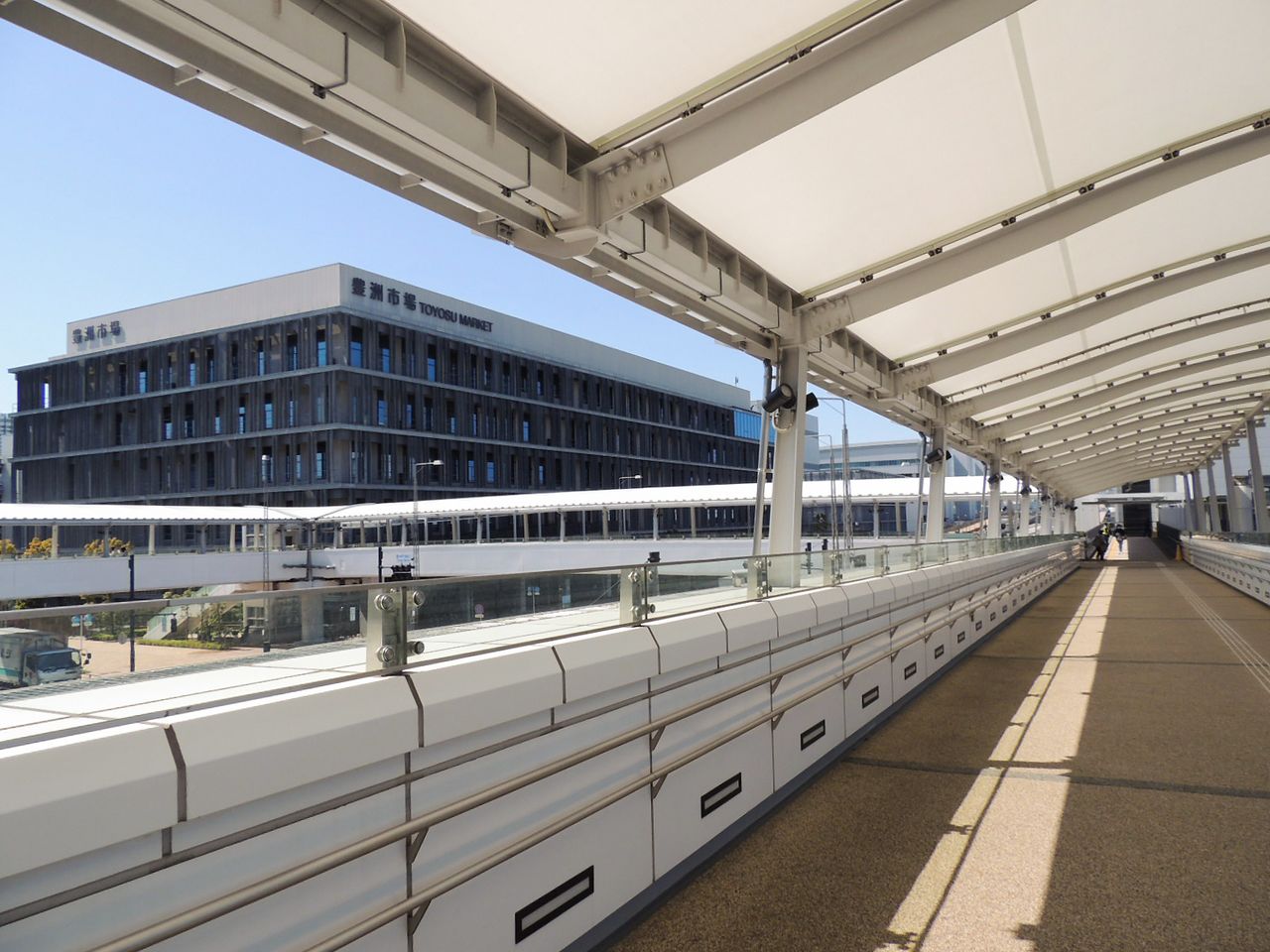 The walkway from Shijō-mae Station to Toyosu Market. Before the spread of the virus, this area was filled with sightseers going to watch the tuna auctions and more, but it has been closed since late February.

The first direct impact on the marketplace came in late February, when the Tokyo metropolitan government announced on February 28 the closing of various facilities in the capital like Ueno Zoo and Tokyo Sea Life Park. A ban on public access to Toyosu Market began on the following day. Sushi shops inside the market, which had already purchased stock for the day’s business, were taken by surprise.

Toyosu has many restaurants, including some sushi shops serving elegant meals every bit as luxurious as those found in Ginza. Naturally, the auctioneers and other staff at the market rarely have time to come and enjoy a fancy meal of sushi during work, so the majority of customers at many eateries are outside visitors. To paraphrase one Toyosu sushi chef, then, no public entry means no business. 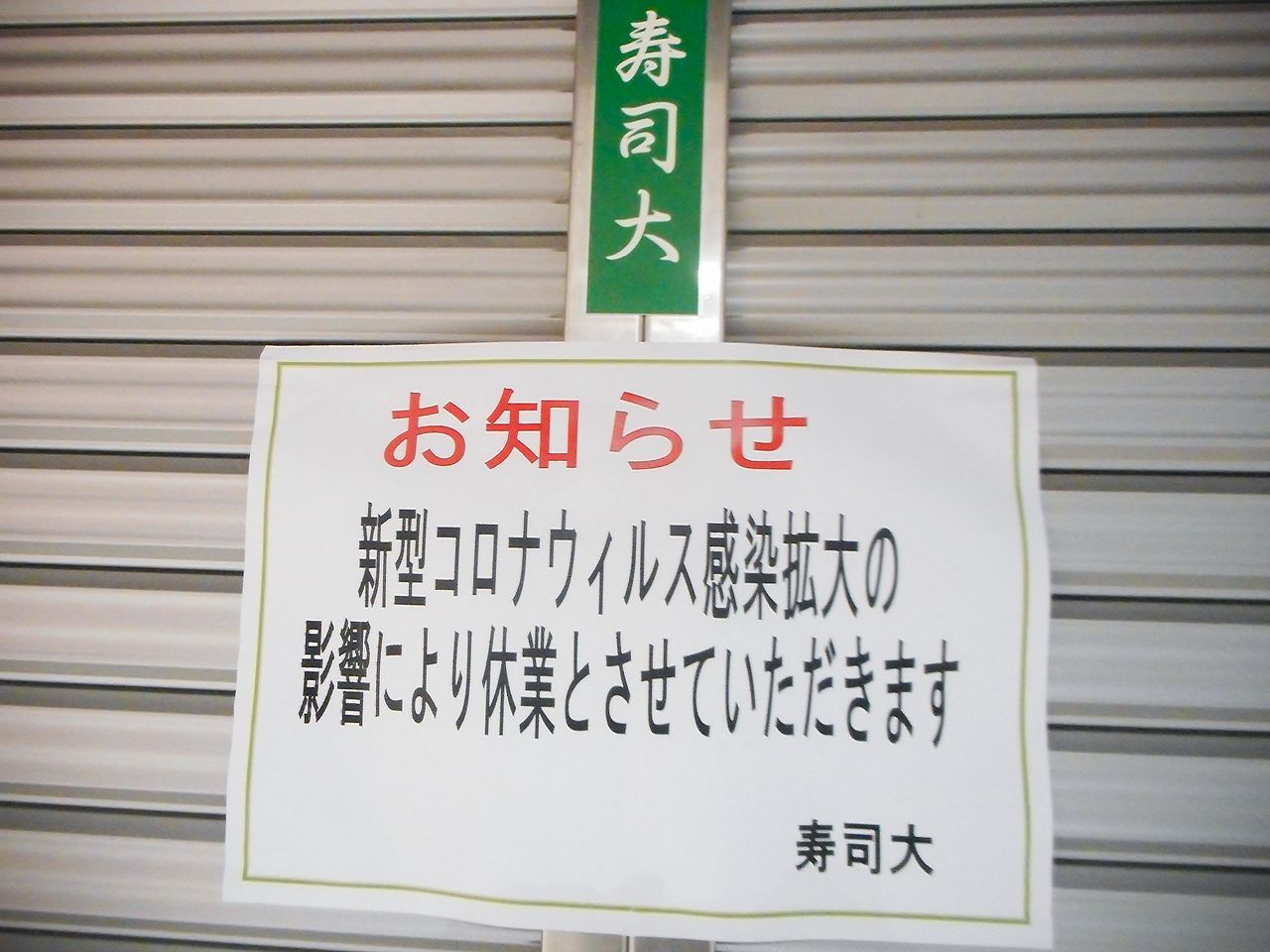 Toyosu’s most popular sushi shop, Sushidai, has been closed since mid-February.

These sushi shops focus on high-grade fish caught wild in Japanese waters and served fresh. When open, they must order stock from wholesalers for the next day’s meals for delivery early in the morning. Since the only potential customers now are marketplace staff, the drop in traffic would inevitably cause a waste of perishable stock if they continued purchasing fish for a complete menu. For many restaurants, then, the choice was clear. Roughly half of the restaurants inside Toyosu Market have temporarily closed, many of them from March.

This problem extends beyond the on-site dining spots. With the government’s continued calls for increased self-isolation, more and more of the city’s restaurants have decreased working hours or closed altogether, leading to a significant drop in outlets for high-grade fish. Prices have tumbled for seafood essential to Tokyo-style sushi like Pacific bluefin tuna, sea urchin, blackthroat seaperch, and tiger prawn. All of these have seen prices drop more than 30%, leaving fish pros stunned.

While restaurant sales are in a slump, though, mass-market outlets like supermarkets are relatively lively. With restraints on dining out, and children and older students staying home due to long-term school closures, more and more people are focusing on home meals. This has led to a spike in sales of prepared foods like deli-style seafood dishes. 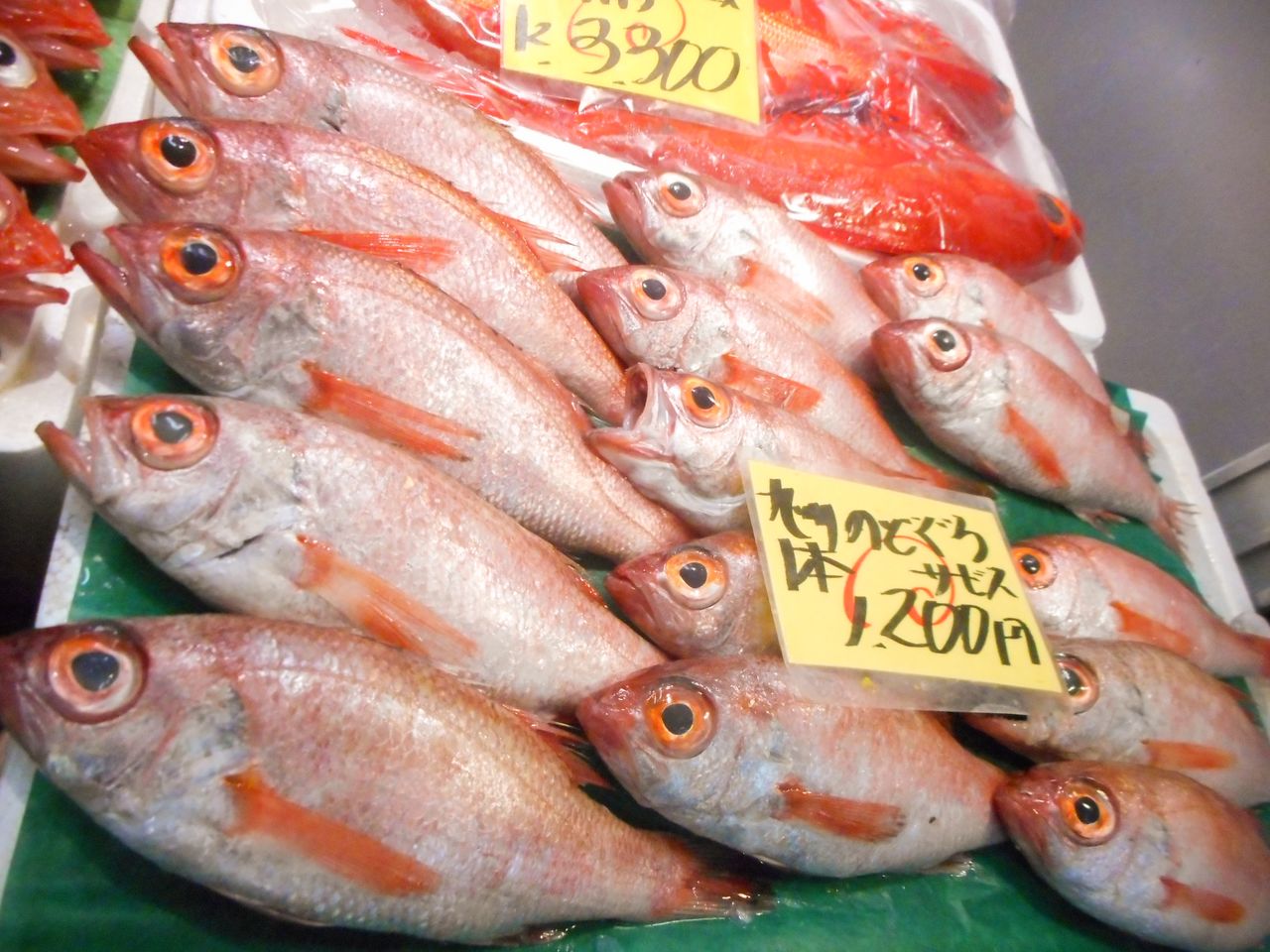 Blackthroat seaperch demand has fallen as COVID-19 keeps customers out of restaurants. 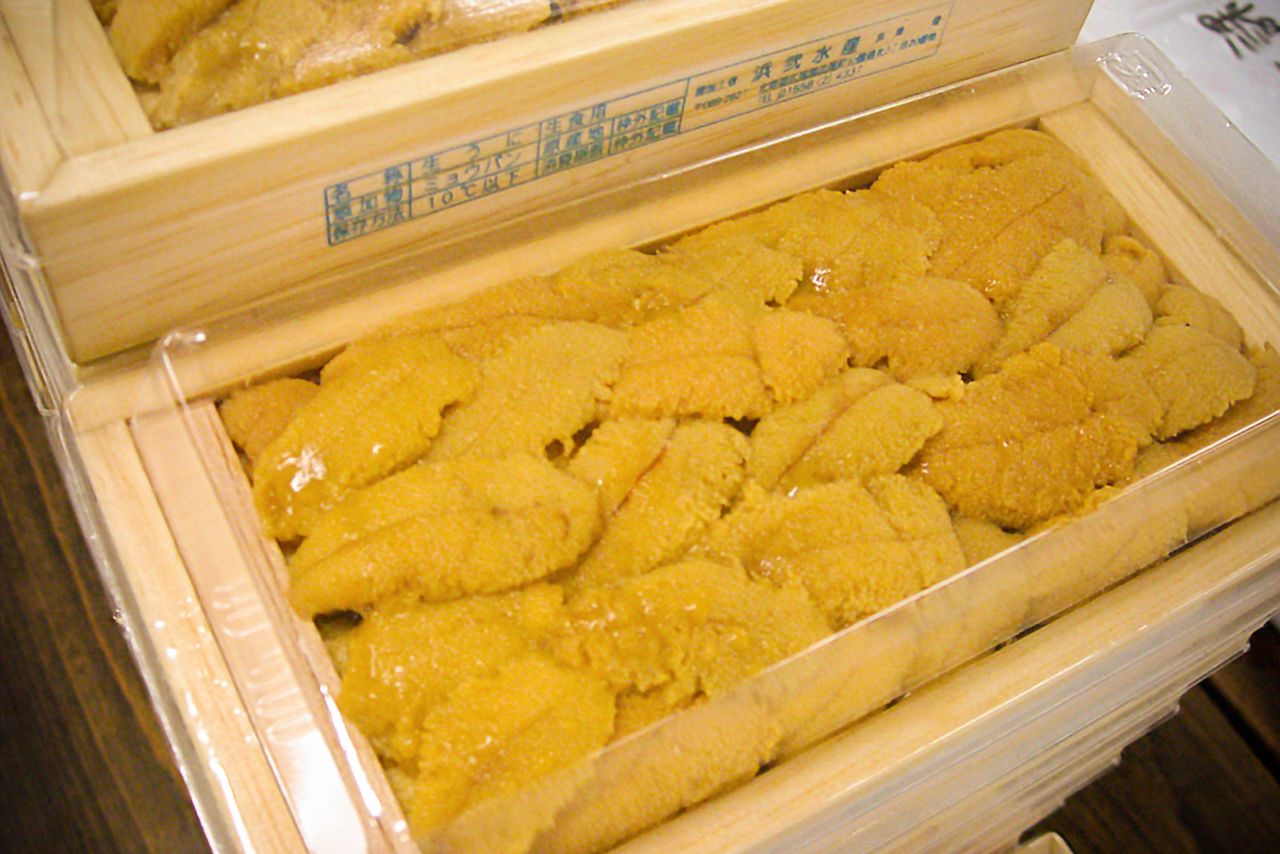 With customers avoiding eating out at sushi shops, demand and prices for sea urchin have also dropped.

The season for Toyama Bay’s symbol of spring, firefly squid, is off to a great start. The mysterious lights of these bioluminescent squid are a popular tourist draw for Toyama Bay, although the catch has been on a downward trend the last few years, leading to rising market prices. The main source is Hyōgo Prefecture. Firefly squid caught there tend to be smaller overall than Toyama’s, but are caught in much larger numbers, with a wholesale price around a third of that of the larger version. Hyōgo-caught firefly squid are routed to supermarkets for mass retail, while Toyama’s catch is usually earmarked for restaurants.

This year, though, the situation has changed. A Toyama research institution announced that it had “hopes for an unusually good catch” this year, and this has proven true, with hauls that rival those of Hyōgo. Yet the fall in demand from restaurants unfortunately means the market for Toyama firefly squid has dwindled dramatically. And so, distributors have started passing the high-end catch on to mass retail outlets. 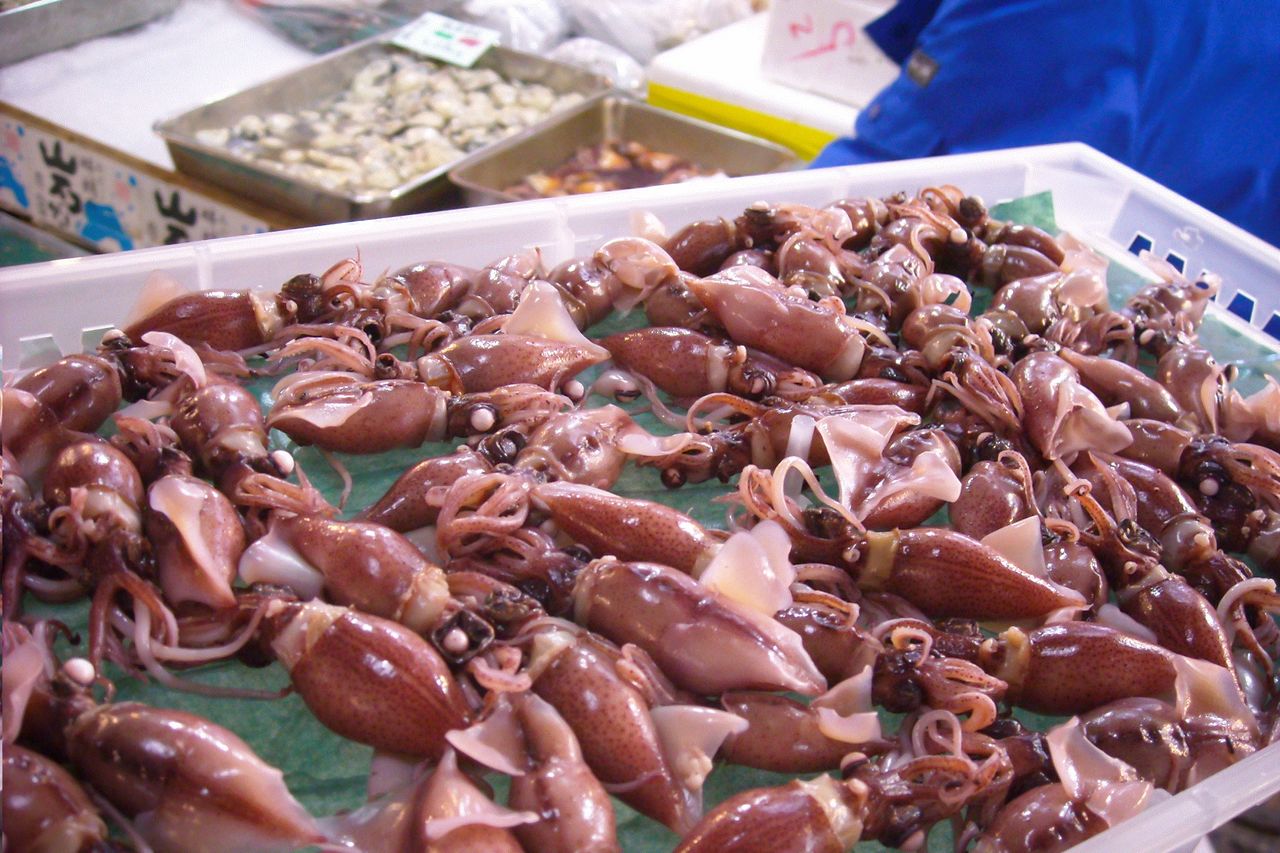 Big catches of firefly squid—shown here in their boiled form—are predicted for Toyama this year.

Seafood retailers are embracing this new situation, saying, “We don’t know how long this will last, but if we can stock higher-grade product for lower prices, we’re going to try to get as much as we can.” Toyosu auctioneers are actively pushing the squid, playing up their flavor and plumpness, trying to entice wholesalers and supermarket buyers.

According to an auctioneer for a wholesale company with years of experience dealing in the squid, “The coronavirus is hurting fish sales, but for the first half of April I think this might be the one seafood item that’s shown a year-on-year increase. Sales are up over 40 percent.” In midseason, the market is selling a ton a day of Toyama firefly squid to supermarkets. “This is unprecedented in all the time I’ve been doing this,” he notes.

Mass outlets like supermarkets tend to focus more on cheap, familiar fish with broader appeal, but as the restaurant market for high-grade fish erodes at Toyosu, more sellers are joining the trend toward home-centered consumption for a broad range of seafood going beyond just firefly squid.

The massive supermarket and mall operator Aeon Retail brought high-grade fish to its capital-area shops from mid-March, offering them at reasonable prices in a special sale to support Japan’s fisheries industry in these trying times. Word soon spread about the availability of Toyosu Market’s high-grade seafood varieties like splendid alfonsino, tilefish, tiger prawn, and sea urchin at relatively reasonable prices.

Toyosu’s wholesalers are not standing idly by as COVID-19 threatens their livelihoods. They are trying unusual ways of selling luxury fish that have lost their usual outlets. Wholesale auctioneers typically offer seafood from regional ports as full crates packed with a single type of fish. However, one wholesaler dealing with smaller companies now ships crates to seafood specialty shops across Tokyo and the surrounding Kantō region that are packed with a variety of high-grade fish like red snapper, splendid alfonsino, and more, allowing customers to specify how many of each type they want. The service is being very well received.

As Japan’s leading food distribution center, Toyosu Market has been designated a business that “must continue operations in any situation” by the Tokyo authorities, and the continue to make their deals. No one knows when the pandemic will abate, so for the time being diners will continue to enjoy the opportunity to eat high-grade fish at supermarket prices. As we all stay isolated and away from restaurants, why not liven up your table with fish normally out of reach? You can add a welcome thrill to your stay-at-home meals while supporting the industry as well. 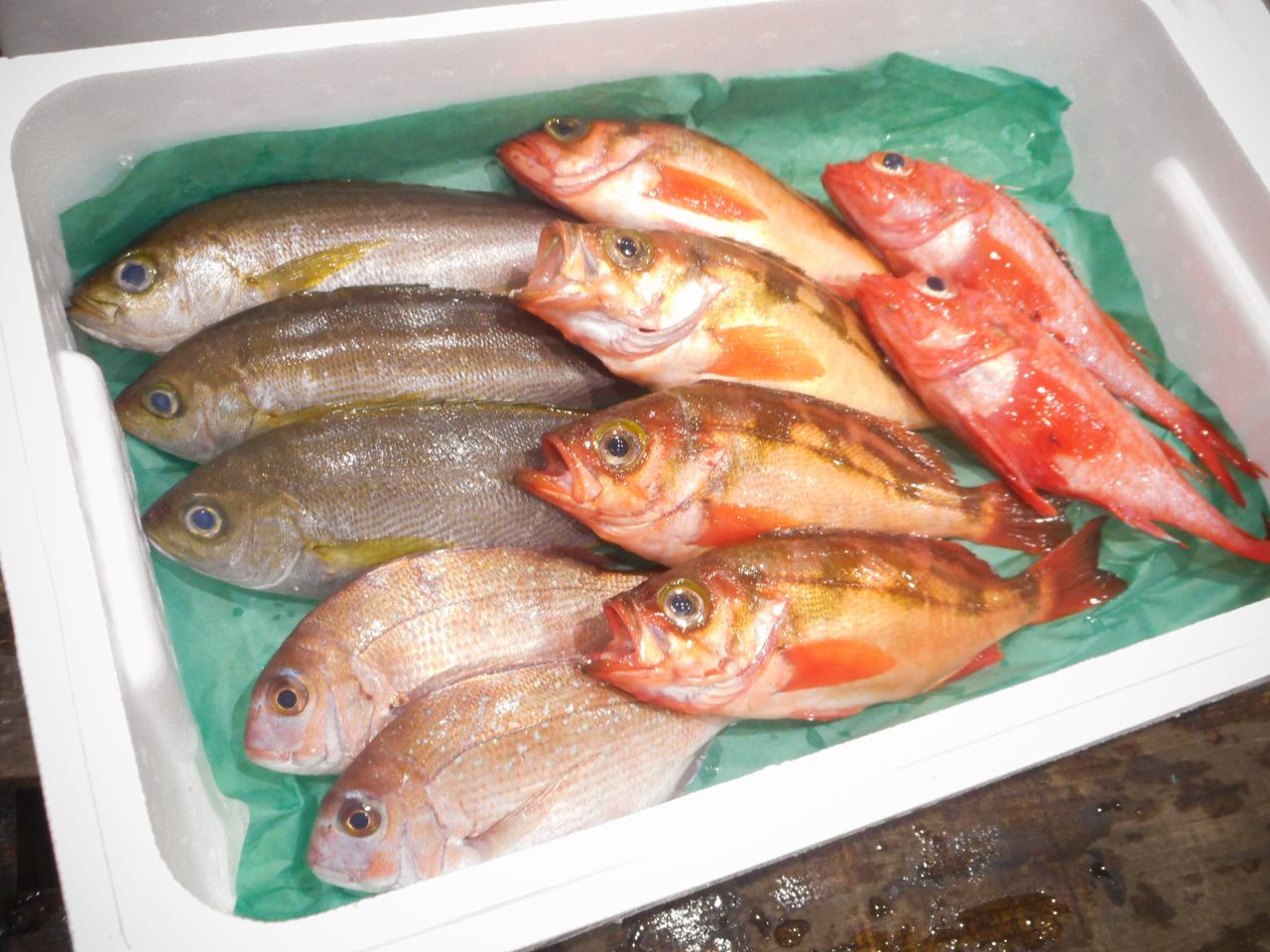 (Banner: Toyosu Market, where public entry was banned from the end of February to prevent the spread of the coronavirus. All photos © Kawamoto Daigo except where otherwise noted.)