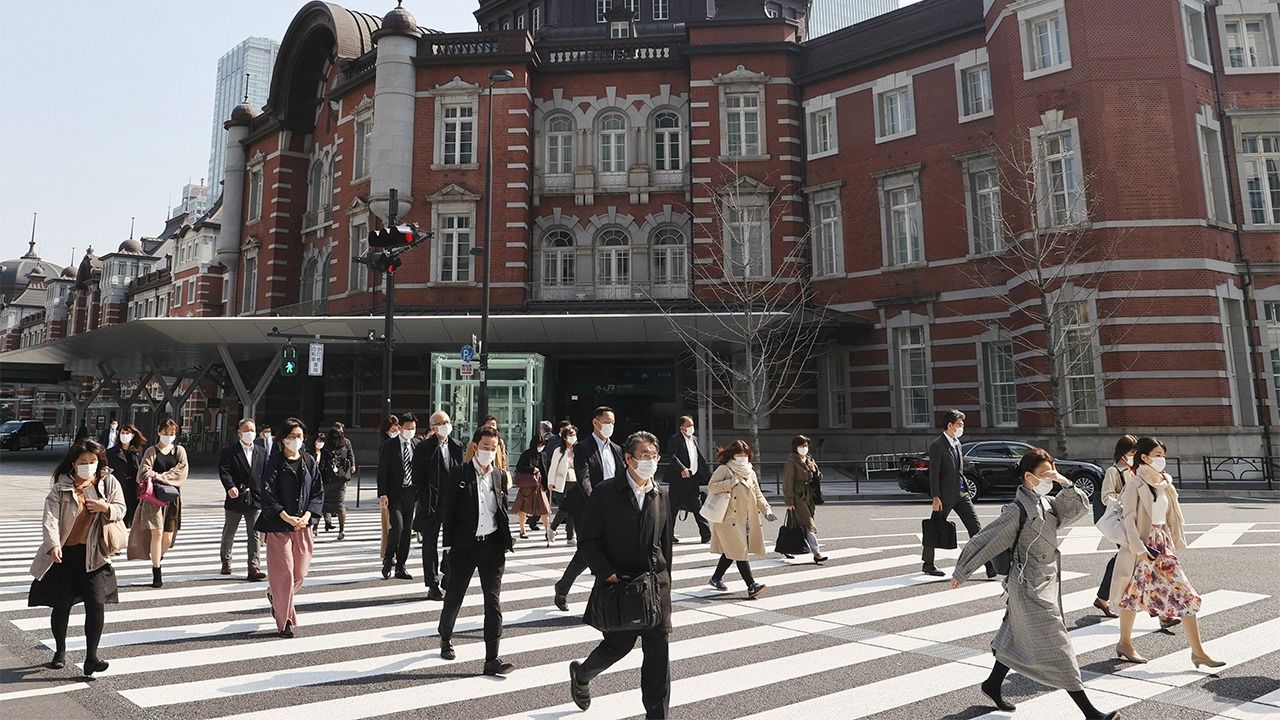 Society Work Apr 24, 2020
In April 2020, Kambayashi Ryo, professor at Hitotsubashi University and Nippon.com Editorial Planning Committee member, won the Japan Academy Prize for his careful analysis of Japan’s labor market from the prewar era to the present day and for his novel observations. We spoke to him about his research. 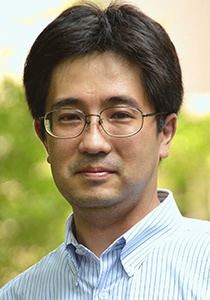 The Japan Academy Prize is presented annually to researchers who achieve notable results in their fields. This year Kambayashi Ryo won the prize for his 2017 publication Seiki no sekai, hiseiki no sekai―Gendai Nihon keizaigaku no kihon mondai (The Standard and Nonstandard Working Worlds: Fundamental Issues in Modern Japanese Economics). His book begins by explaining the historical formation of Japan’s labor market. It then describes the labor market of recent years, presenting an image of this market that has emerged within the larger framework of the gaps between “standard” and “nonstandard” workers, or employees with stable, long-term positions and those in more precarious part-time or irregular roles.

Many say that the labor market has become polarized into these worker cohorts in recent years, but analysis of the statistics indicates that the phenomenon of bipolarization existed long before, and the market has not actually undergone a rapid shift to this state, as is generally supposed. Although there have been changes to the market, the mechanism behind the standard/nonstandard bifurcation has not altered significantly.

The Dilemma of Government Intervention

Many people think that the current coronavirus crisis will cause immense changes to the labor market and work modes. Kambayashi, however, believes that a few years after this has ended, we will see that the situation has actually not changed much at all. This is because he does not anticipate significant changes to society’s decision-making mechanisms.

Kambayashi reasons that the workplace in Japan is firmly grounded in the principle of autonomous labor-management relations. Since World War II, there has been little direct government intervention in Japan’s labor market. Prior to the war, a public job-placement network, one of the few intercessions by the government, developed by absorbing the pre-existing work referral network that had developed privately, rather than being created from scratch. Japan’s labor market has been molded by the principle that the main stakeholders in a workplace make the key decisions, and this underpins employment practices. The formulation of rules via intervention by a higher force, such as the government or the courts, is not widely accepted in Japan, and is, in fact, the antithesis of the principle of autonomous labor-management relations.

In the current crisis, if a company suspends business due to the state of emergency, the government maintains the principle that wages and allowance issues should be resolved through consultation between labor and management. Even now, when the labor economy is facing an unprecedented predicament, the government is half-hearted about becoming involved in devising workplace rules. This demonstrates a feature of Japan’s labor market—the unfeasibility of intervention from above by the government or another third party. So long as this system of rule formulation remains unchanged, there is little hope of progress in Japan’s labor market.

Another point that Kambayashi emphasizes is the decline in self-employment. Recent changes to the employment market are often discussed in tandem with deregulation, and the increase in nonregular employees has been seen as the most crucial phenomenon. But actually, the number of regular employees is not in decline. Data indicates that what has decreased is the proportion of self-employed persons. Since the 1980s, Japan’s labor market has seen a consistent rise in employees (people whose work is based on labor contracts and who receive wages from an employer), whether standard or nonstandard, coupled with a fall in the number of self-employed workers. While conventional Japanese employment practices have been preserved, emphasizing regular employees based on autonomous labor-management relations, nonregular employees have been left out in the cold, with poor formulation of rules. Essentially, they have been neglected. 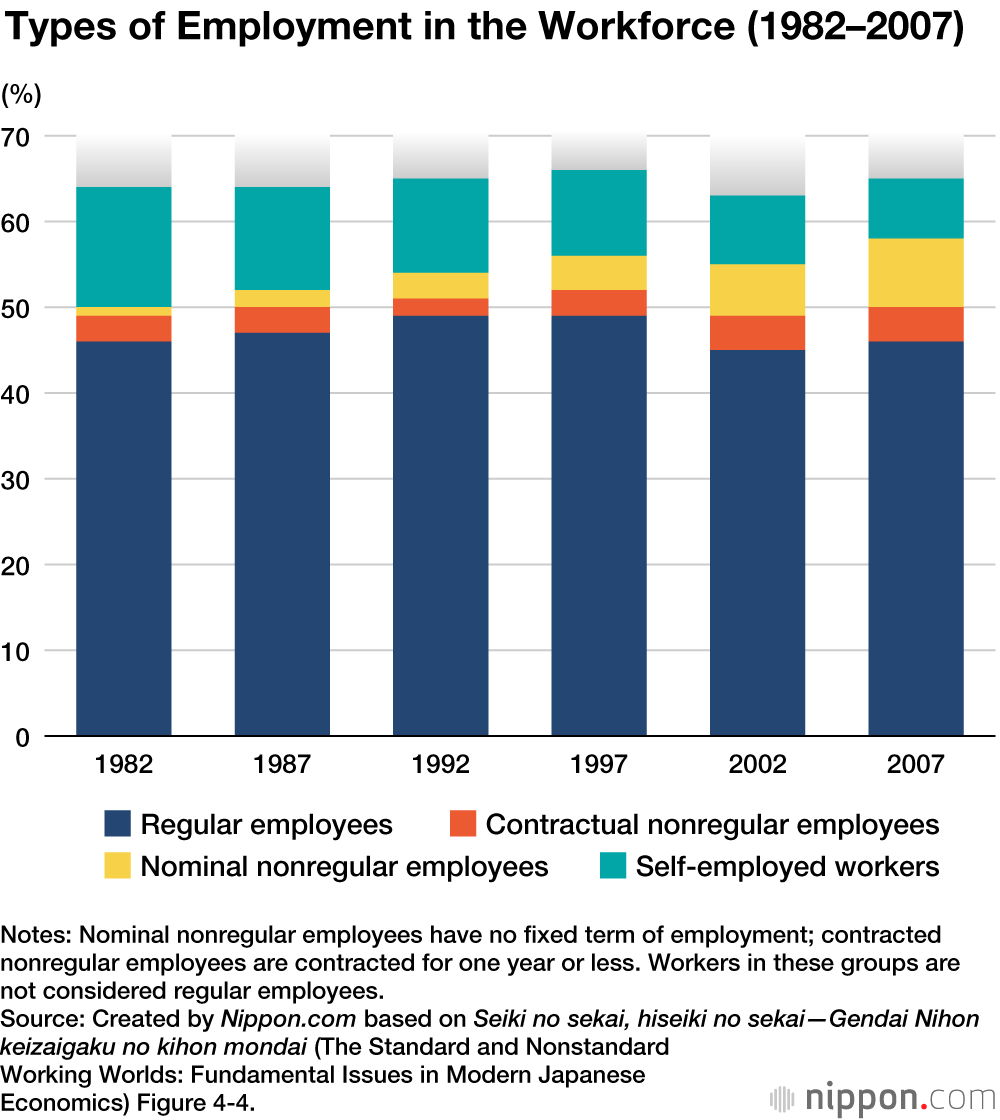 The reason why the proportion of self-employed persons has decreased is not well-understood. In the past, Japan had a high proportion of self-employed persons in the workforce. From the high economic growth period of the mid-1950s to the early 1970s, right up through to the subsequent period of slow growth in the 1970s, they continued to comprise over 20% of the workforce. That number has progressively fallen, and has now reached the OECD average of around 10%. It is not certain whether or not this decline has ended, and there is no telling what impact it would have on the labor market if it were to fall further. In the future, Kambayashi hopes to conduct further research into the role of the self-employed in the labor market, and to verify the mechanism behind the fluctuation in their numbers.

The Role of Mediators in Rule Formulation

A further theme for Kambayashi’s future research is the circumstances surrounding rule formulation in the labor market. He is now focusing on the role of intermediary organizations slightly removed from workplace management-labor relations. One example is job-placement services, which are a now key player in the labor market. The recruitment industry operates by gathering information from employers and job seekers and matching them. Currently, these intermediaries act on behalf of either the employer or the job seeker, but if they were able to maintain a more neutral position, they could perform arbitration should any labor-management issues arise. In addition, a degree of scale is needed for companies to successfully match a broad range of employers with workers, and consequently, they may be better positioned to prescribe more encompassing standards and rules than individual labor-management mechanisms can.

Intermediary organizations other than recruitment agencies also have a role to play in the creation of workplace regulations. In the future, Kambayashi hopes to investigate the potential for neutral rule development by these organizations, including existing groups such as labor unions and chambers of commerce, which, until now, have not been effective in this capacity.

(Originally published in Japanese. Banner photo: Masked workers walk by Tokyo Station on the way to work on April 8, 2020, the morning after the announcement of the state of emergency to curb the spread of the new coronavirus in Japan. © Jiji.)