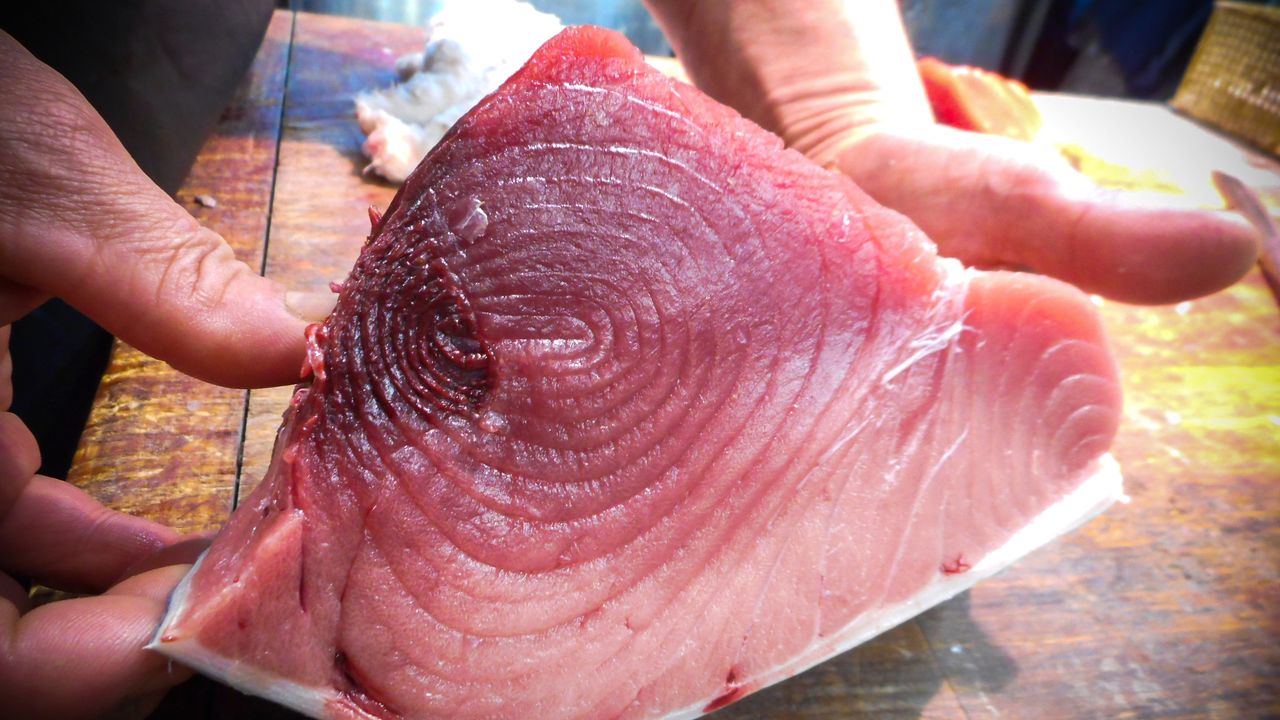 Economy Lifestyle Guide to Japan Food and Drink Jun 11, 2020
As the COVID-19 pandemic saps the vitality of Tokyo’s Toyosu wholesale fish market, wholesalers are beginning to experiment with direct sales to consumers to make up for plummeting sales to high-end Tokyo restaurants.

Commercial establishments are the core of business at central wholesale food markets throughout Japan. The largest of these markets—at Toyosu on Tokyo’s waterfront, where seafood and produce from all over Japan is sold—is no exception. The fish market auctions are open only to wholesalers and licensed buyers. The wholesalers later transport their large-volume purchases to the Toyosu Fisheries Intermediate Wholesale Market, where restaurant chefs and other commercial buyers normally throng in search of select fish and other seafood products for their businesses.

With the spread of COVID-19, however, first the sushi shops and then larger restaurants began to close, causing demand to plummet for bluefin tuna and other high-end seafood products. Struggling to maintain their business, intermediate wholesalers are now exploring options for selling directly to individual consumers to make up for the shortfall.

From Wholesale to Retail

Normally, tuna bought at auction in the Toyosu central market is transported whole, without any processing, to the intermediate wholesale market. The wholesalers there then cut the fish into large blocks or thick slices as ordered by the chefs who come to shop for their restaurants. It is the chef who then slices the blocks into smaller morsels for customers to eat. Now that the restaurants are closed and the chefs are not coming to shop, though, the wholesalers have had to do the cutting and packaging themselves.

One of these wholesalers, Chūō Gyorui, has prepared ready-to-eat tuna slices in plastic-wrapped trays, just like those sold in supermarkets. The trays come in sets of three, one with Mediterranean bluefin tuna, a second tray with southern bluefin tuna, and a third tray of domestic albacore (longfin tuna) toro (the fatty underbelly meat, considered a special delicacy). 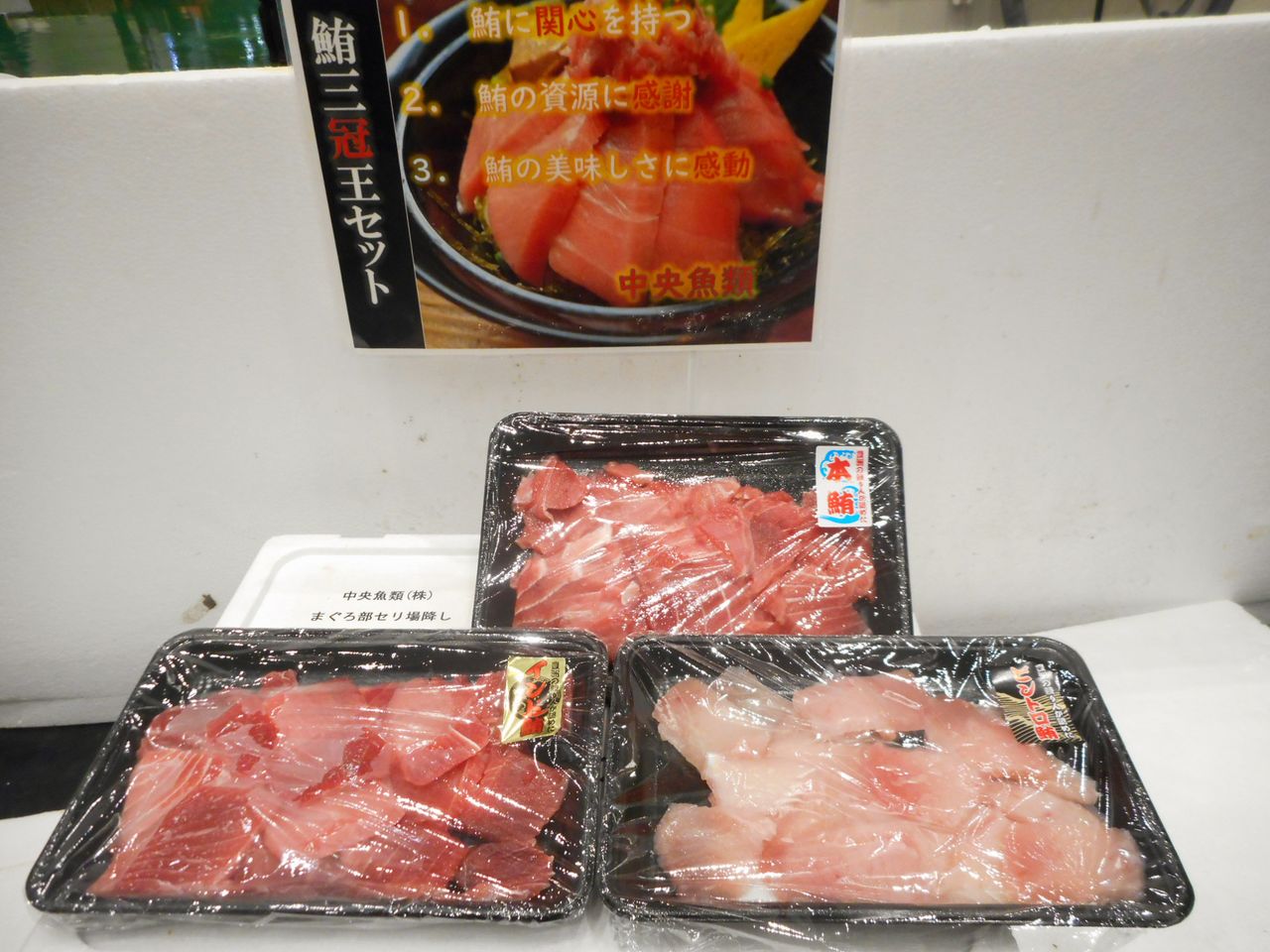 The sets have been dubbed the Maguro sankan-ō setto (Triple Crown Tuna Set) by Sekine Takayuki, the central market auction buyer for Chūō Gyorui. The label is a play on the Japanese word for crown, kan, representing kansha (thanks) for the tuna and the fishers who provide it, kandō (excitement, pleasure) for the exquisite flavor, and the kanshin (interest) that the seller hopes everyone will have in such delicious tuna.

Says Sekine, “Consumers generally assume that the only top-grade tuna is landed at Ōma in Aomori Prefecture. But there are many varieties of tuna, and they offer a rich palette of flavors, depending on the season and the parts of the fish.” The objective of the Triple Crown Tuna Set is to spark consumer interest in the many kinds of tuna that are available.

The fish for the Triple Crown Tuna Set is personally selected by Sekine from top-grade catches landed at the Port of Yaizu in Shizuoka Prefecture, among other harbors. The fisheries processing plant at Yaizu slices each fish into 6.5-millimeter pieces, a cut size that—after much trial and error—was determined to bring out just the right texture, flavor, and color of the tuna. Chūō Gyorui began selling the tuna sets in Toyosu’s intermediate wholesale market in April and now also sells directly to supermarkets and a few restaurants. All three varieties of tuna in the Triple Crown Tuna Set have won high praise from the Toyosu pros for their quality and reasonable pricing. 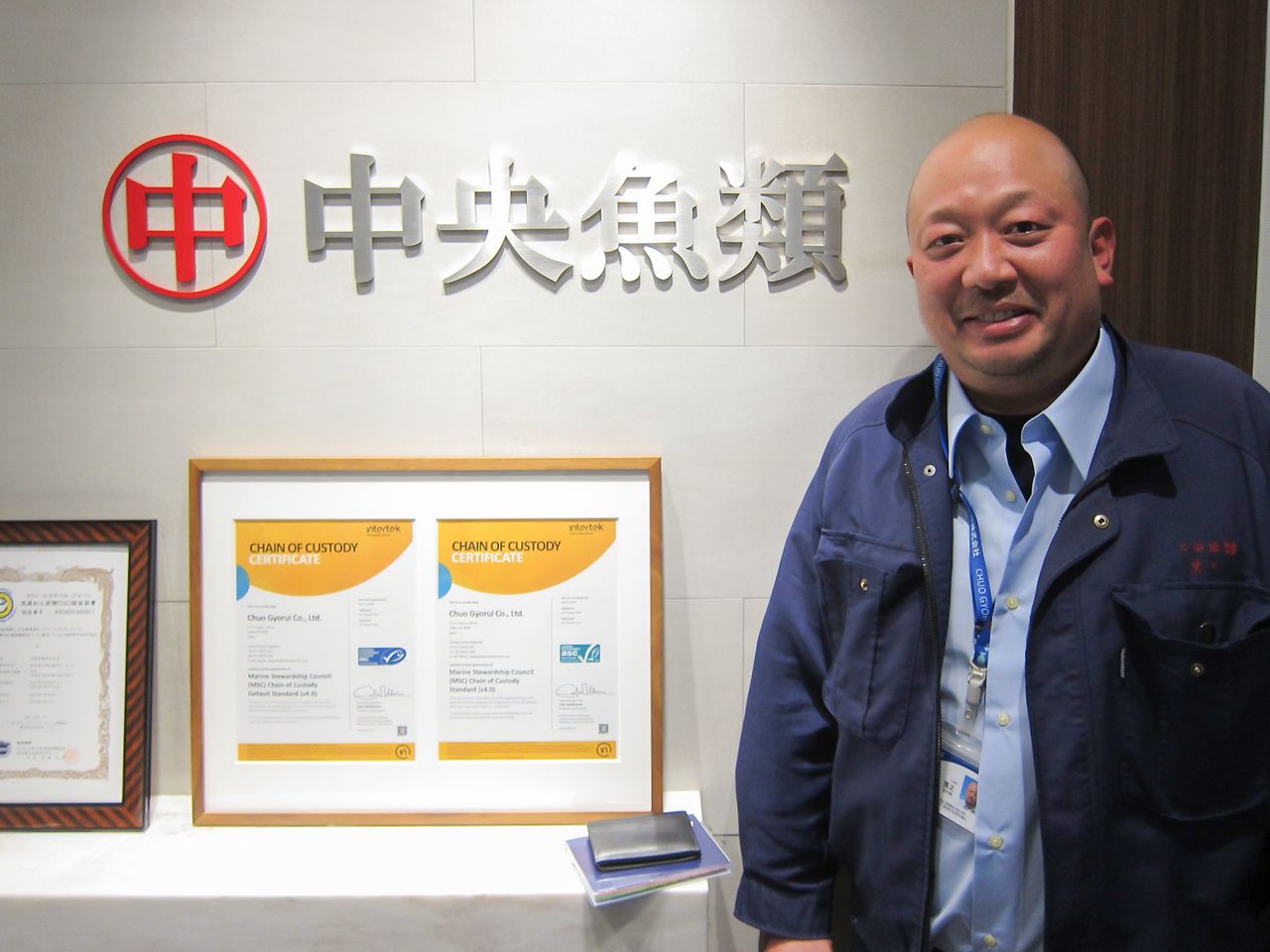 Restaurant closures have drastically reduced the number of food procurers visiting the Toyosu intermediate wholesale market. Forced to curtail the hours their market booths are open, some of the wholesalers are working to develop new sales channels.

Kōno Ryōtarō is the president of Otatsu Shōten, an intermediate wholesaler that normally sells to department stores and high-end restaurants. He says, “Sales in April dropped from last year’s 40 million yen to only 10 million yen. Since we don’t know how long this situation is going to continue, we’ve decided to apply our expertise in top-quality fish and fish products to online sales to consumers. Hopefully, they will appreciate how good fish can be.”

Otatsu Shōten is making its full line of top-grade fish—including natural bluefin tuna, sea urchin, hatsugatsuo (the first bonito of the season), kinmedai (golden eye snapper), and sekiaji, a superior quality of horse mackerel from Ōita Prefecture—available to buyers online. The company also sells sets of six to seven kinds of high-grade fish. These Otatsu tokusen chokotto-zutsu setto (Selected Otatsu Assortments) are available for ¥5,000, excluding tax and shipping charges. All are sold at the same bargain prices set for restaurants and retail fishmongers.

Otatsu has also joined up with the fresh produce vendors in the Tsukiji outer market to create boxes of assorted fish and a few fresh vegetables like tomatoes, cucumbers, eggplants, and spring onions. Online sales began in mid-April and have been brisk ever since. 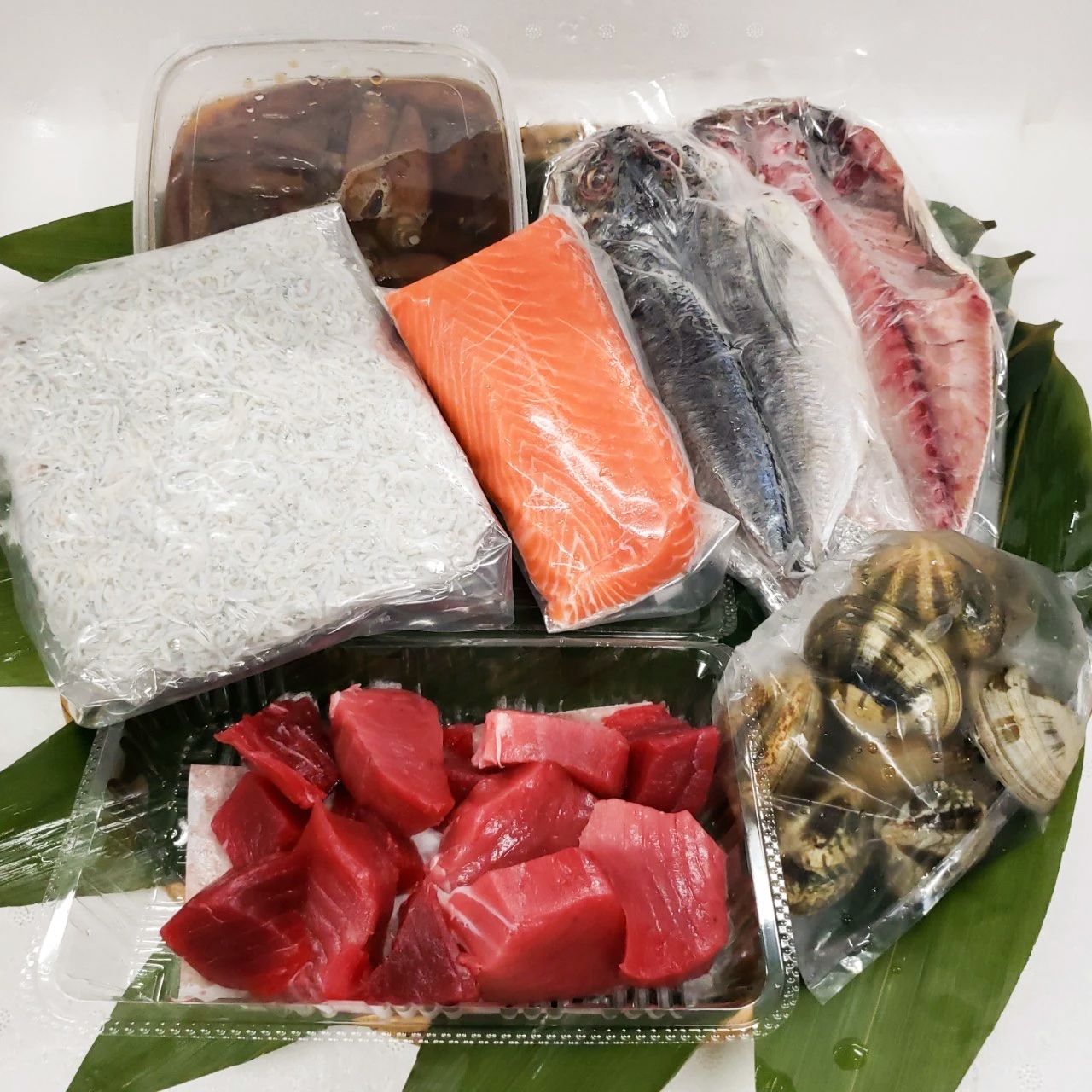 An example of a Selected Otasu Assortment including chunks of natural bluefin tuna sashimi, a block of salmon, a packet of scalded whitebait, and dried horse mackerel. (Courtesy of Otasu Shōten)

Yamawa, a Toyosu wholesaler specializing in tuna, is also selling online with an offering of domestic bluefin tuna in large blocks of more than 700 grams for ¥2,000 apiece, excluding tax and shipping. These are large blocks of choice portions of the fish. “We want consumers to savor rich, fatty chūtoro and lean akami of a quality they can never get with the smaller cuts usually sold in retail markets,” says Yamawa President Watanabe Kazuyoshi. The firm also provides videos explaining how to prepare the tuna by removing the skin and scales and how to cook the nutritious, dark red, blood-filled portion of the tuna block.

Other items sold online by Yamawa are a sushi fish set that includes, in addition to tuna, isaki (chicken grunt), kuromutsu (Japanese blue fish), and itoyori (a type of bream), a fresh fish set, and a set of exclusively sourced vegetables from Kamakura, Kanagawa Prefecture. “Not exactly comparable, but I would say in some cases our tuna costs around half what you would pay at a retailer,” says Watanabe. Yamawa has just finished a period of test marketing and will be setting up its own online shopping website very soon. 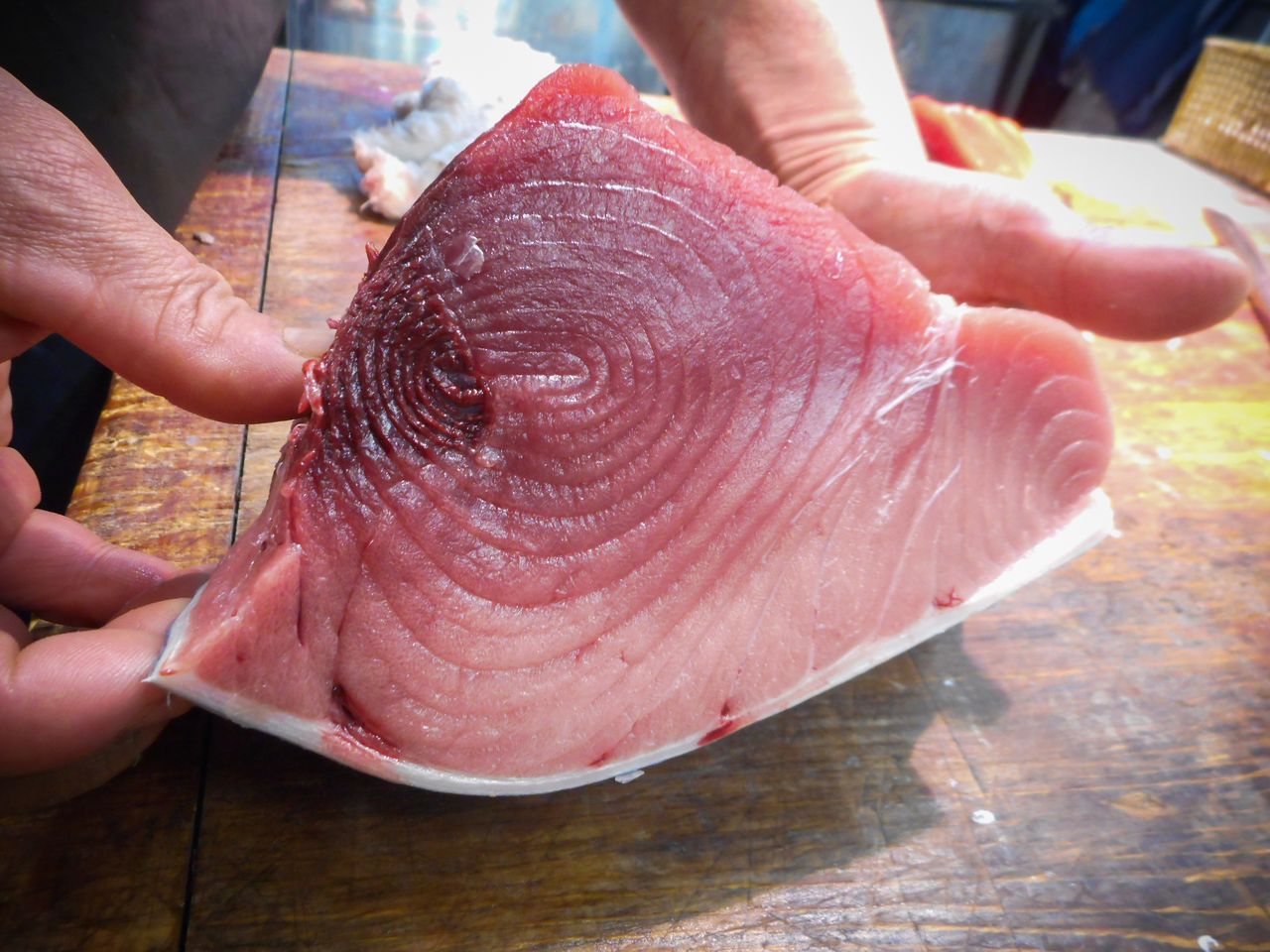 A sample of the fresh domestic tuna block sold online by Yamawa.

Bringing Toyosu to the Consumer

Another tuna wholesaler in the Toyosu intermediate wholesale market, Suzutomi, also operates sushi shops in Tsukiji and Ginza. The pandemic has forced the sushi shops to close, but Suzutomi President Suzuki Tsutomu has arranged to have the company’s tuna sold directly to consumers through the website of Tsukiji Ogumaya, a company that works in both wholesale and retail. The prepackaged Tsukiji Suzutomi Sushi Chef Selection has proven especially popular for its high quality and reasonable price.

Some of the Toyosu wholesalers are opting for more novel ways to boost sales. One of these is the drive-through shopping service offered by a wholesaler that also sells its fish at Tsukiji Uogashi in the Tsukiji outer market. Customers can order online and pick up their order at Namiyoke Shrine in the Tsukiji outer market. This new service is also gaining in popularity.

Restaurants and other professional food businesses will continue to be the Toyosu fish market’s main clientele, but during this COVID-19 pandemic, the Toyosu wholesalers are learning a lot about the retail food business, and the crisis has brought Toyosu closer to the individual consumer in a way that may have not been possible before. It is to be hoped that the newly “reborn” Toyosu will continue its incentives in retail services even after the pandemic finally subsides.

(Originally published in Japanese. All photos by the author except where otherwise noted.)