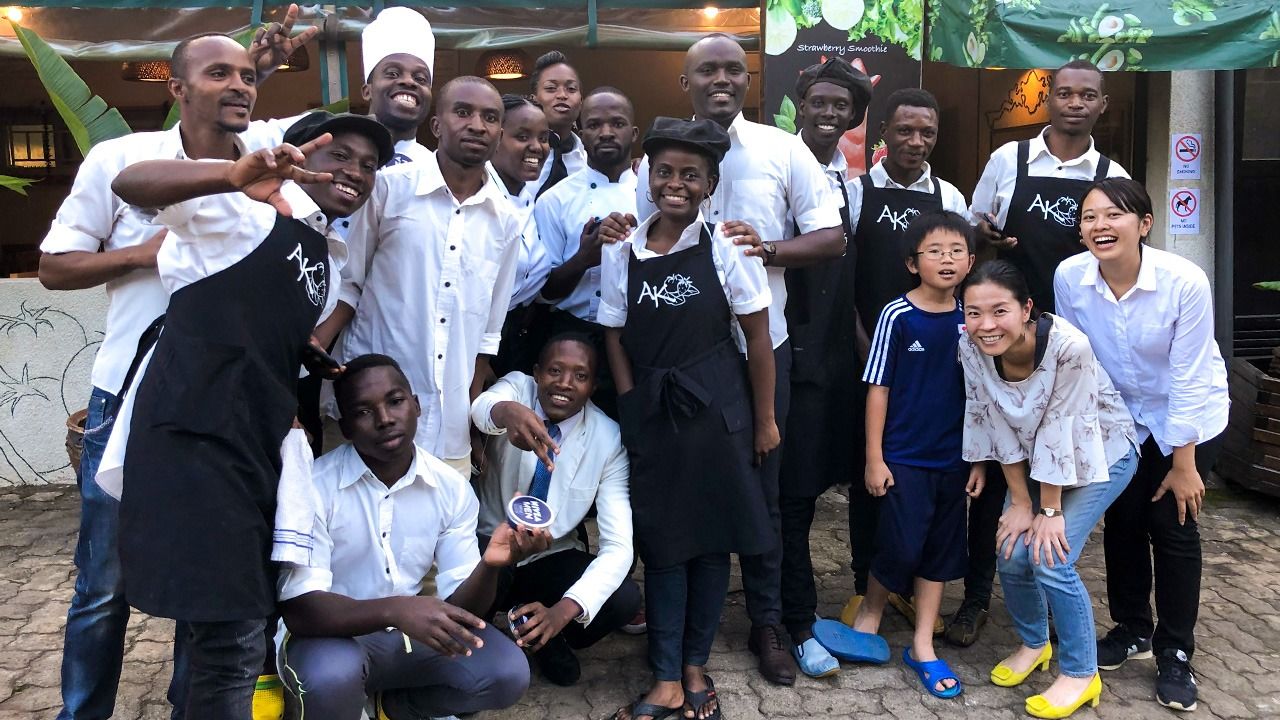 Rwanda: A Land Reborn from Despair Tackles the COVID-19 Crisis

Society Culture Work World Jul 17, 2020
Rwanda is often associated with the genocide of 1994, when up to a million Rwandans lost their lives, but recently, a booming information and communications technology industry has earned Rwanda the nickname “the Singapore of Africa.” Most of the population still live in poverty, though, and the country is now struggling to contain the new coronavirus. A Japanese woman who moved to Rwanda with her child five years ago shares her experiences as a resident and restaurant manager during the pandemic.

Five years have already passed since I moved to Rwanda with my son, who was then five years old. It was a dramatic departure from my life in corporate planning. After moving to Rwanda, I turned my hand to restaurant management. My fusion restaurant, Asian Kitchen, employs local Rwandans and welcomes diners from around the world. Despite the COVID-19 pandemic, which first hit the country in March, I am still operating my business and raising two children.

Most people in Japan are largely unfamiliar with Rwanda, but now that Africa is attracting attention as the “last frontier,” it has gained more recognition. People often comment on the stark contrast between the genocide of 1994 and the country’s revamp as a rising ICT star.

Rwanda is a landlocked nation, a little south of the equator, and just east of the center of the continent. The so-called “land of a thousand hills” has an area of 26,340 square kilometers—about one and a half times the size of the Japanese island of Shikoku. The capital, Kigali, is ‎around 1,500 meters above sea level, and year-round low humidity makes it a comfortable place to live. This is one of the reasons I chose to move here.

With a population of over 12 million, Rwanda is Africa’s second most densely populated country. Being landlocked puts it at a geographical disadvantage, unsuited to either manufacturing or trade. It also lacks resources. Some 70% of the population work in agriculture, and the country has historically lacked any notable industries.

But since 2000, under the leadership of President Paul Kagame, the country has promoted tourism, with tourists coming to see the endangered mountain gorilla; and it hopes to become a knowledge-intensive ICT leader. Rwanda is enjoying remarkable economic growth—in recent years, gross domestic product has risen an average of 7% annually, and the country has earned the moniker “the Singapore of Africa.” But as of 2018, the gross national income was a mere $780 per capita (Japan’s GNI was $41,310), so it is still far from affluent. 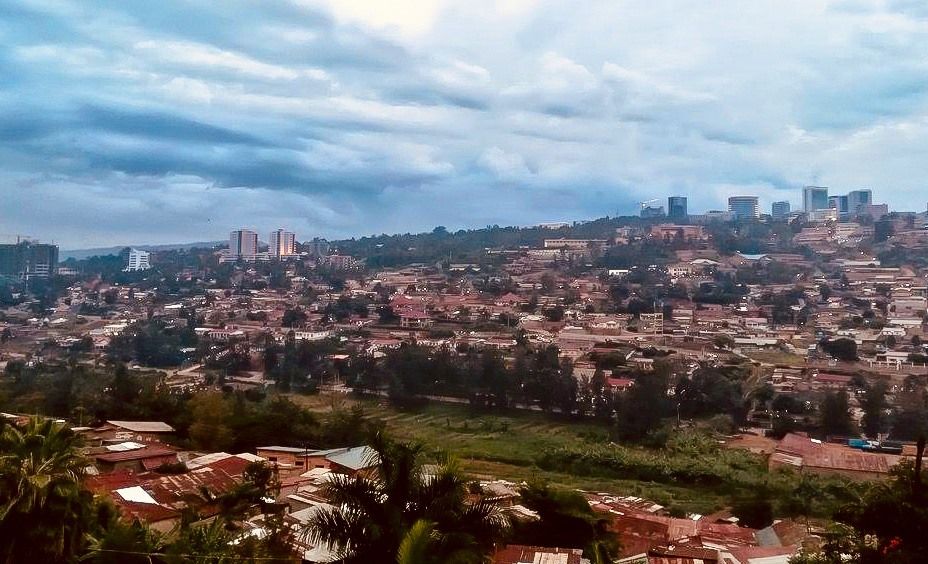 Rwanda has also been hit by the COVID-19 pandemic.

The country recorded its first case on March 14, 2020. Churches and schools were closed the following day. With my eldest son in fourth grade, I felt the immediate impact. Six days later, the airport was shut down.

On March 21, a national lockdown was imposed. Only shops supplying food or medicine were permitted to trade, while all other business closed. Public transport was halted, travel between cities was banned, and people were ordered to work from home.

People were only permitted to go outside to shop for food or medicine. Restaurants were only allowed to sell takeaway meals. The measures were imposed almost overnight. It was not self-restraint, like Japan—going outside was prohibited, with strict policing of violations.

Kigali became a different city—motorcycle taxis, which usually buzz about the city, disappeared. Usually, many people get about on foot, but during the lockdown, pedestrian traffic fell dramatically—citizens were outnumbered by police and military personnel.

Rwanda values its public security, an essential element in supporting tourism. Women can walk the main streets at night in peace of mind and, although there are some thefts and scams, violent crime is rare.

When I first opened my restaurant, I worked late nights and, although I would not recommend it, carried cash when I left. In neighboring countries, you could risk violent robbery and even murder. But despite perceptions, Africa is not all like that—each country is different.

The excellent public security is thanks to the strong leadership of President Paul Kagame. During his presidency, the police and military have upheld the law, and aligned themselves with the population.

Even before the lockdown declaration, police and soldiers were always on the streets of Kigali. I was often surprised walking home when soldiers suddenly appeared from the bushes. Now that I am used to it, I feel reassured by their constant presence. Perhaps it is rare in Africa, but in my five years here, I have never even been coerced for a bribe. 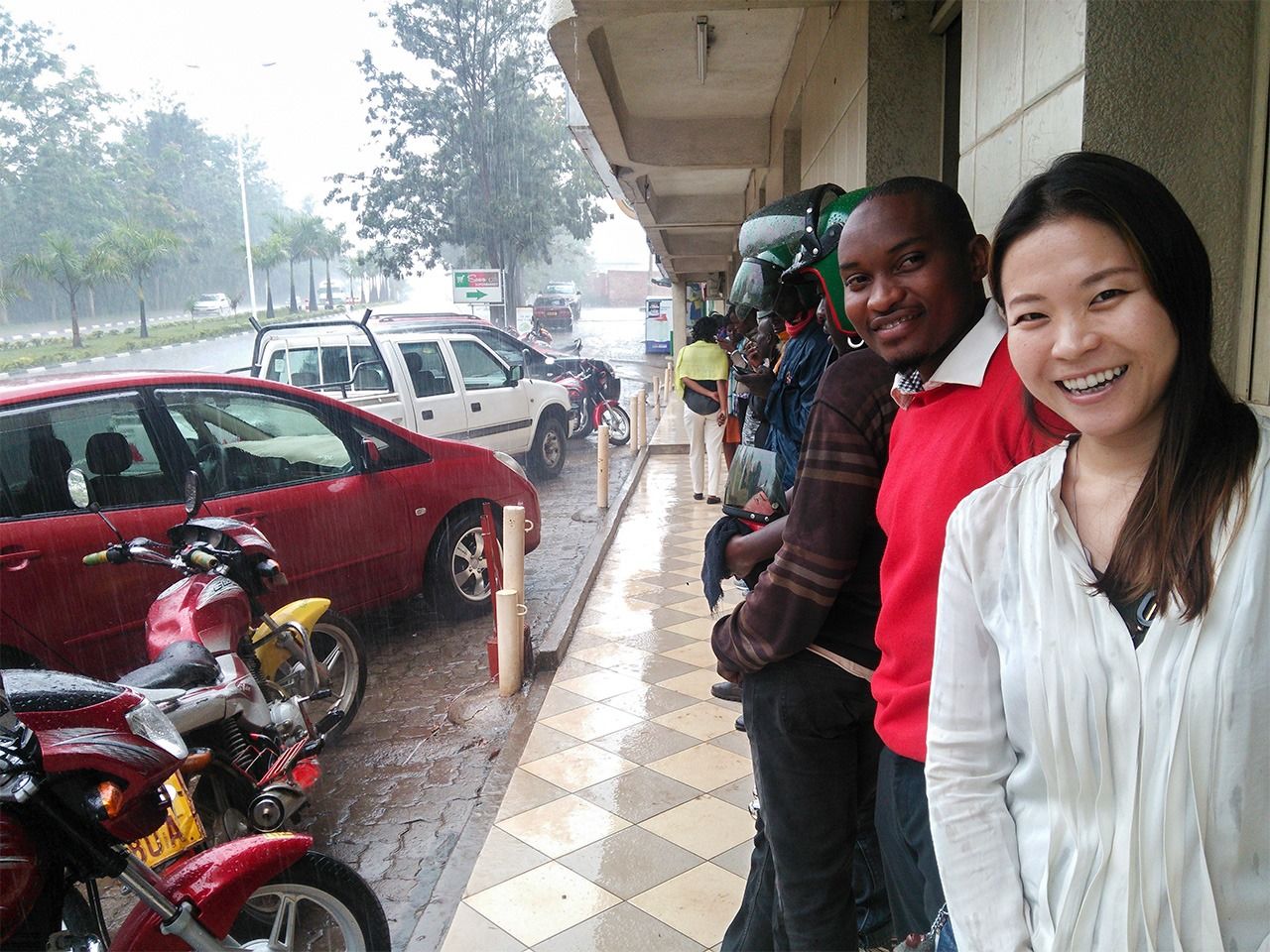 Motorcycle taxi drivers shelter from the rain before the pandemic.

Staff Struggle to Commute During the Lockdown

The police have strictly enforced the lockdown measures. Because my restaurant is classified as an essential service, my staff were permitted to come to work, but were frequently stopped for questioning. They tried their best to convince the police—showing employee identification and their uniforms. Some took long detours, sometimes walking up to two hours to reach the restaurant.

I told my staff not to try too hard, because the police and military here wield absolute power, even in normal circumstances. There have been stories of young people shot dead for resisting police patrols.

My staff considered themselves lucky if they managed to get past the police controls and walk to work. Staff who had to change buses en route could not make it.

The government has appealed for people to work from home, but I wonder what percentage of Rwandans have jobs that can be done remotely. Motorcycle taxi drivers had trouble making ends meet, as did small-time merchants who use the taxis to conduct their business.

Before Japan declared a state of emergency, people were still commuting on crowded public transport despite calls to work remotely. There were reports of shortages at supermarkets in Japan due to hoarding, which is hard to believe—Japan’s transport and logistics systems appear miraculous viewed from abroad. Things are totally different in Rwanda, where most people do not even have the cash to panic buy.

While in some countries, people were stressed about being stuck at home, in Rwanda, many wondered how they would feed their families from one day to the next. Despite this, Rwandans calmly obeyed the government orders—they had little choice. 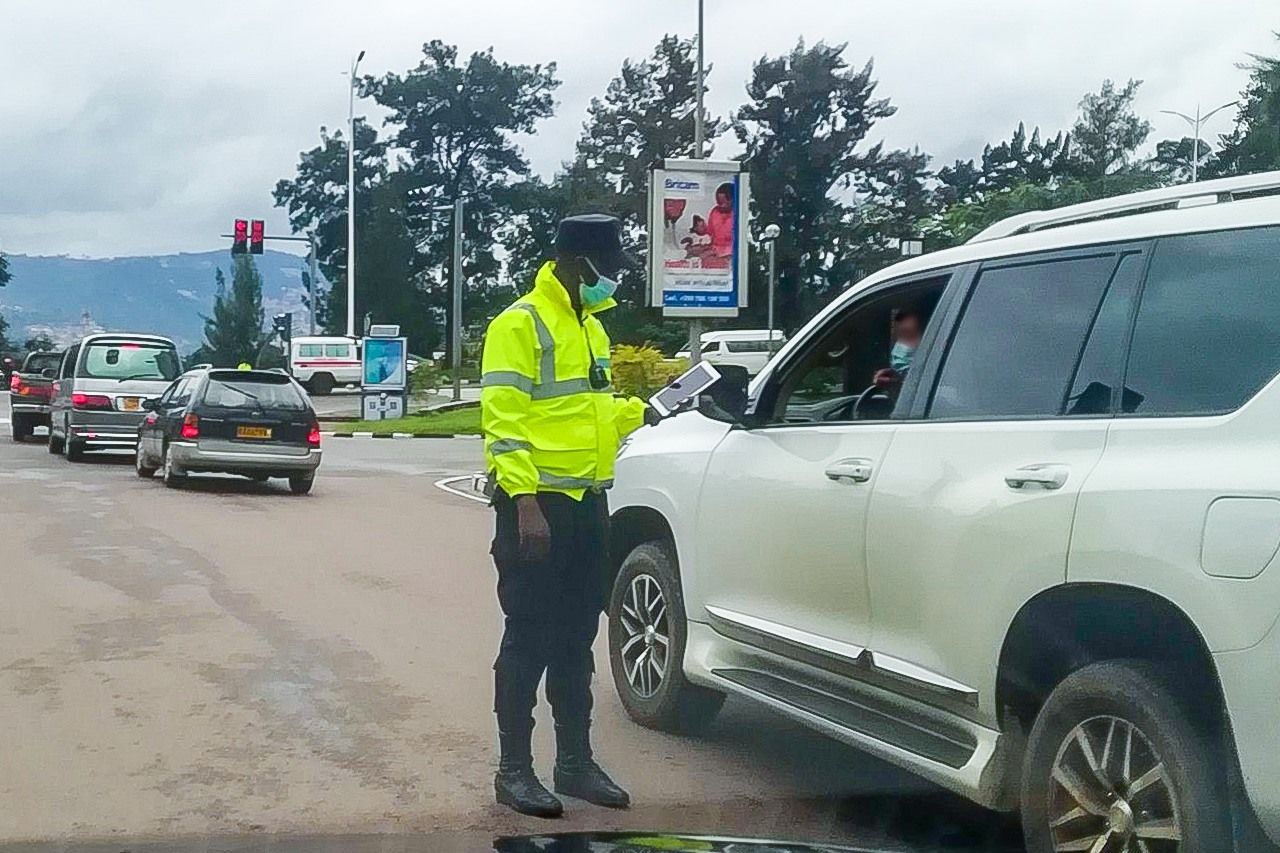 Police conducting checks. From April, they could to check movement permission by tablet.

A Resolve to Never Repeat the Past

I have some concerns about public security in these circumstances. When it was announced that Rwanda’s international flights would be suspended, I wondered if it was safe for a woman with two children to remain in the country. Security might worsen, or foreigners might become the target of violence, were common concerns. But knowing Rwanda as I do, I thought this was unlikely, so I chose to stay.

Until recently, around 12,000 Westerners and Asians were living here (the most recent official data, from 2014, puts the number at 4,000), but I guess that around 70% returned to their own countries. No doubt many still think of past events here. I used to feel that way myself.

After living here for some time, I have realized that the horrors of 1994 are why Rwanda has transformed, and strives to maintain public order. People never want to return to those times—and their resolve is strong. It is also why they believe in and support the current administration. This resolve gives the people hope in their future.

The current pandemic gave me a sense of the Rwanda’s tenacity. Because the people constantly face adversity, COVID-19 is seen as just another challenge to overcome.

Rwanda already lacked industry and job opportunities. While the pandemic is under control in many developed countries, the specter still looms over Rwanda, with its fragile medical system.

The country has also struggled with floods this year. With the heavy rains, few people can sleep at night without worrying about the roof over their heads.

But amid COVID-19 and the other struggles facing Rwanda, I never notice despair. And despite naming my business “Asian Kitchen,” I have never experienced any racism.

Although I had to reduce shifts, resulting in pay cuts, my staff reassure me that “Everything will be all right.” In these trying circumstances, I have kept my business open, encouraged by the strong hope of the Rwandans around me.

(Originally published in Japanese. Banner photo: The author (front row, second from the right) with the staff of her restaurant, Asian Kitchen. All photos courtesy the author.)