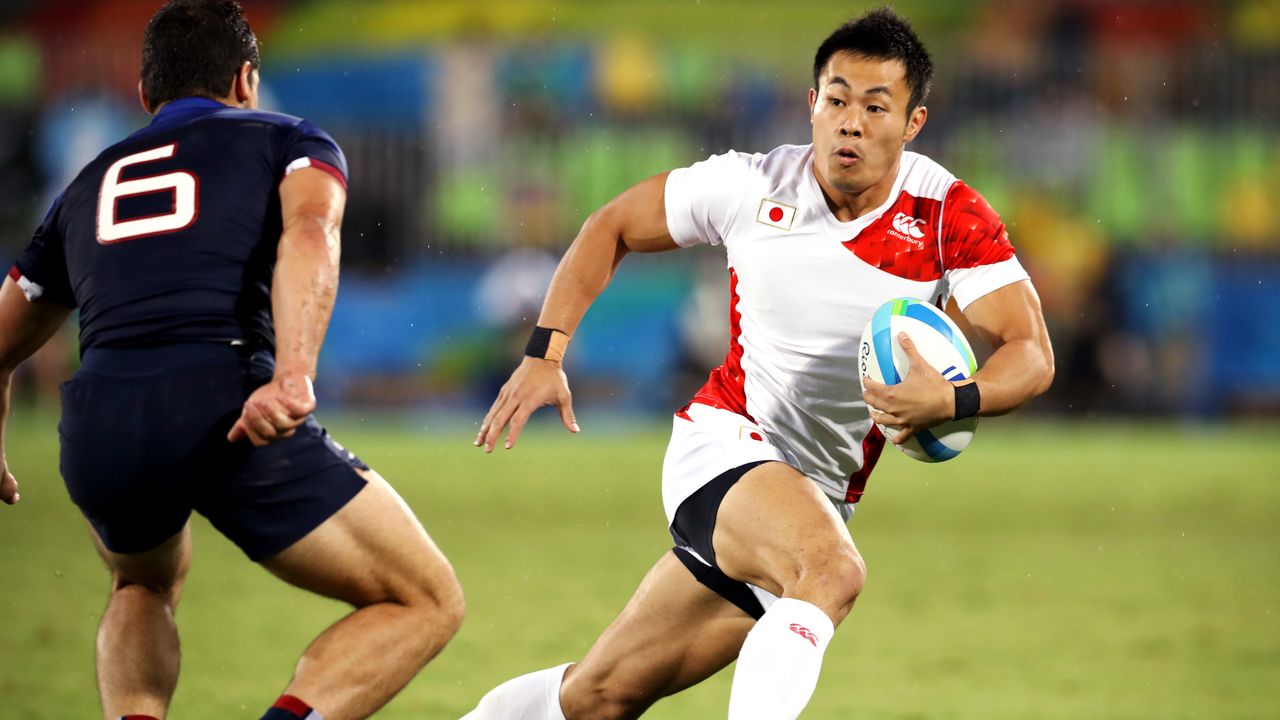 Jul 27, 2020
Building on the excitement of the 2019 Rugby World Cup, fans will have more reasons to cheer when the men’s and women’s national rugby sevens teams try for gold in Tokyo in 2021.

Rugby fans in Japan were still savoring the memorable events of the 2019 World Cup when news of the Olympic postponement hit. There were high hopes that the momentum created by the Brave Blossoms’ historic charge into the quarterfinals of the tournament would carry over to Tokyo 2020, propelling the national rugby sevens squads into gold-medal territory.

However, the COVID-19 pandemic has forced the games to be postponed until 2021, a disappointing development that was made even more bitter by the news that World Cup hero Fukuoka Kenki was foregoing the chance to play at the Tokyo Olympics. The fleet-footed winger had hoped to make the games his swan song, but faced with the year-long wait, he chose to hang up his cleats early to pursue his medical studies.

Rocked by the Pandemic

The appearance of the coronavirus has heavily impacted sports competitions around the country, and rugby is no exception. The Top League, the highest level of professional rugby in Japan, was riding a massive groundswell of interest produced by the World Cup. The 2020 season kicked off in January amid much fanfare, with teams playing in front of record-breaking crowds, but competition was put on hold after six rounds of matches due to the virus.

Rugby sevens, the seven-a-side version of rugby union, has also felt the pinch, with international competitions being postponed or cancelled outright. Although the sevens format is less well known in Japan than the 15-player variant, the Japanese men’s and women’s national teams have made a name for themselves on the international stage.

In 2016, the men’s squad shocked the world by powering its way into the bronze-medal match at the Rio de Janeiro Olympics. Although it lost to a dominant South African side, the team’s fourth-place finish was the highest ever at a major international tournament. The women’s team, the Sakura Sevens, failed to make it out of its pool at the games, but the squad has remained focused over the last four years on player development. 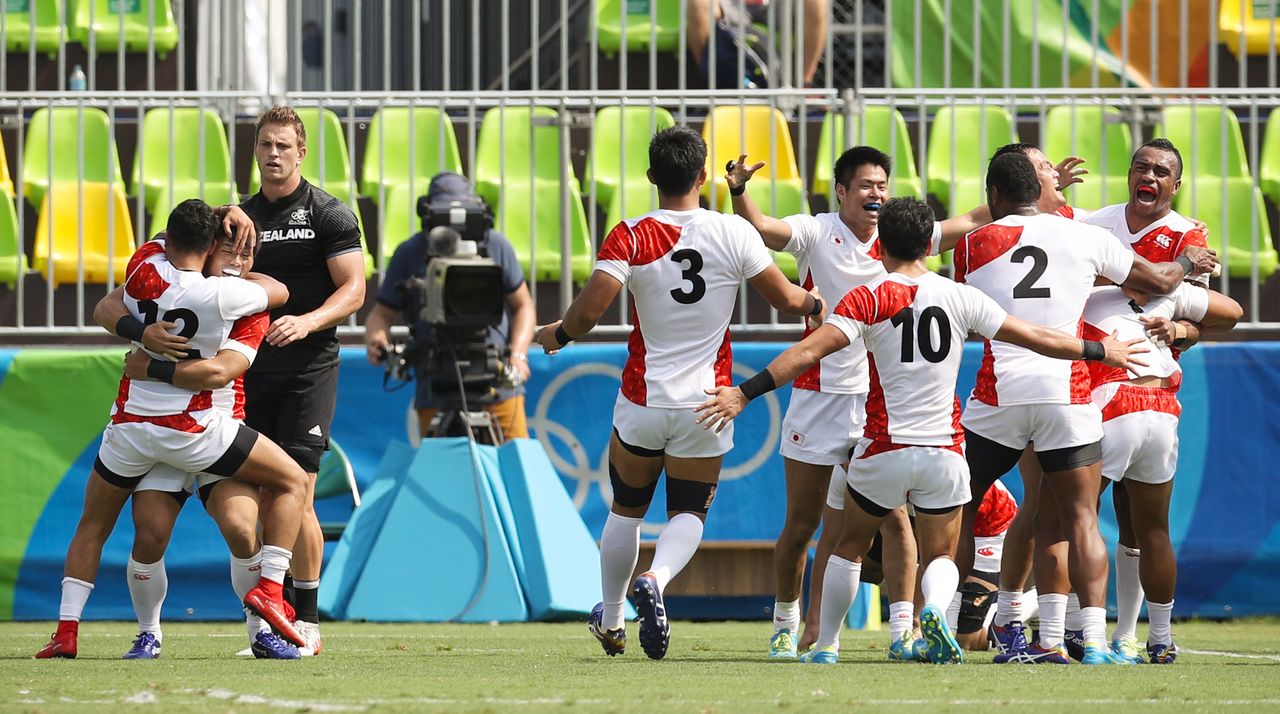 The Japan Sevens celebrate after snatching victory away from powerhouse New Zealand during group play at the 2016 Rio de Janeiro Olympics. (© Jiji)

Rugby sevens is similar in structure to its 15-a-side counterpart, with some variations in rules to accommodate the reduced number of players. Teams play on a full-sized pitch (70 x 100 meters), but match pace is considerably faster. There is greater focus on running, passing, and agile footwork as players have more open ground to cover, and games are shorter, consisting of two seven-minute halves.

Scoring in sevens is the same as in rugby-15s, with five points for a try, three for a drop kick or penalty kick, and two for a conversion (although these must be drop kicks and not taken from a kicking tee). One difference, though, is the team that scores kicks off rather than the side conceding points. 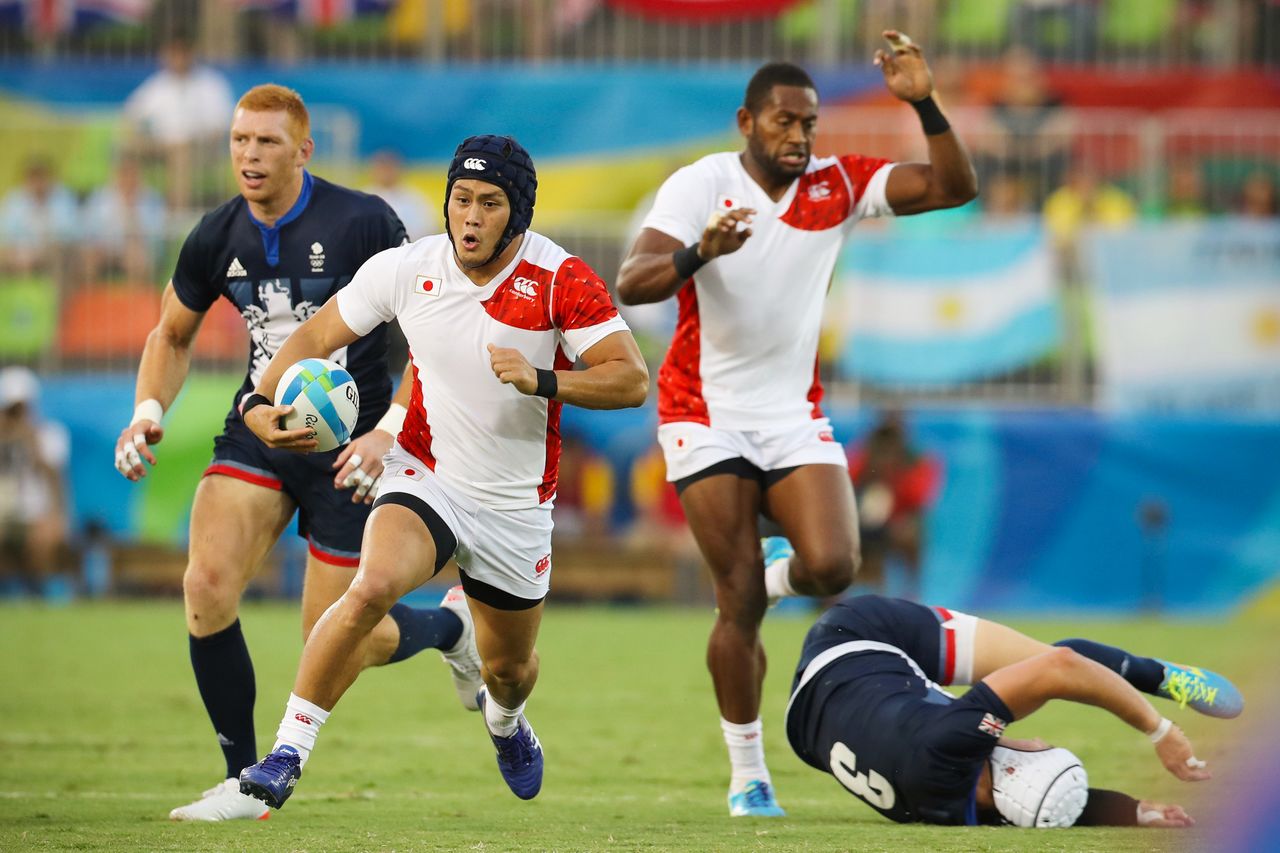 Hikosaka Masakatsu puts his natural speed to use to advance the ball against England in group play at the Rio Olympics. (© Jiji)

Although newcomers can find the technical aspects of rugby difficult to grasp, the streamlined sevens format is more accessible to novice fans. Set plays like scrums and lineouts consist of only three players per team rather than the jumbled mass that is common in the 15-a-side version, making restarts faster and adding to the overall tempo of matches. Clashes such as rucks and mauls are also stripped down, enabling spectators to better follow the action inside the pileups.

Another appealing aspect of rugby sevens is its diverse range of competing countries. While traditional rugby powers like New Zealand, whose men’s and women’s sevens teams won back-to-back World Cup titles in 2013 and 2018, are always in the running, lower ranking countries—the “minnows” of rugby-15s—are more of a force in the seven-player format. Take reigning men’s Olympic champions Fiji, for instance. Although a small Pacific island country of some 880,000 people, Fiji has become a top contender in the sport by consistently fielding squads that balance strength and speed with a flair for artistic pass work and nimble running, dubbed “Fijian magic.” 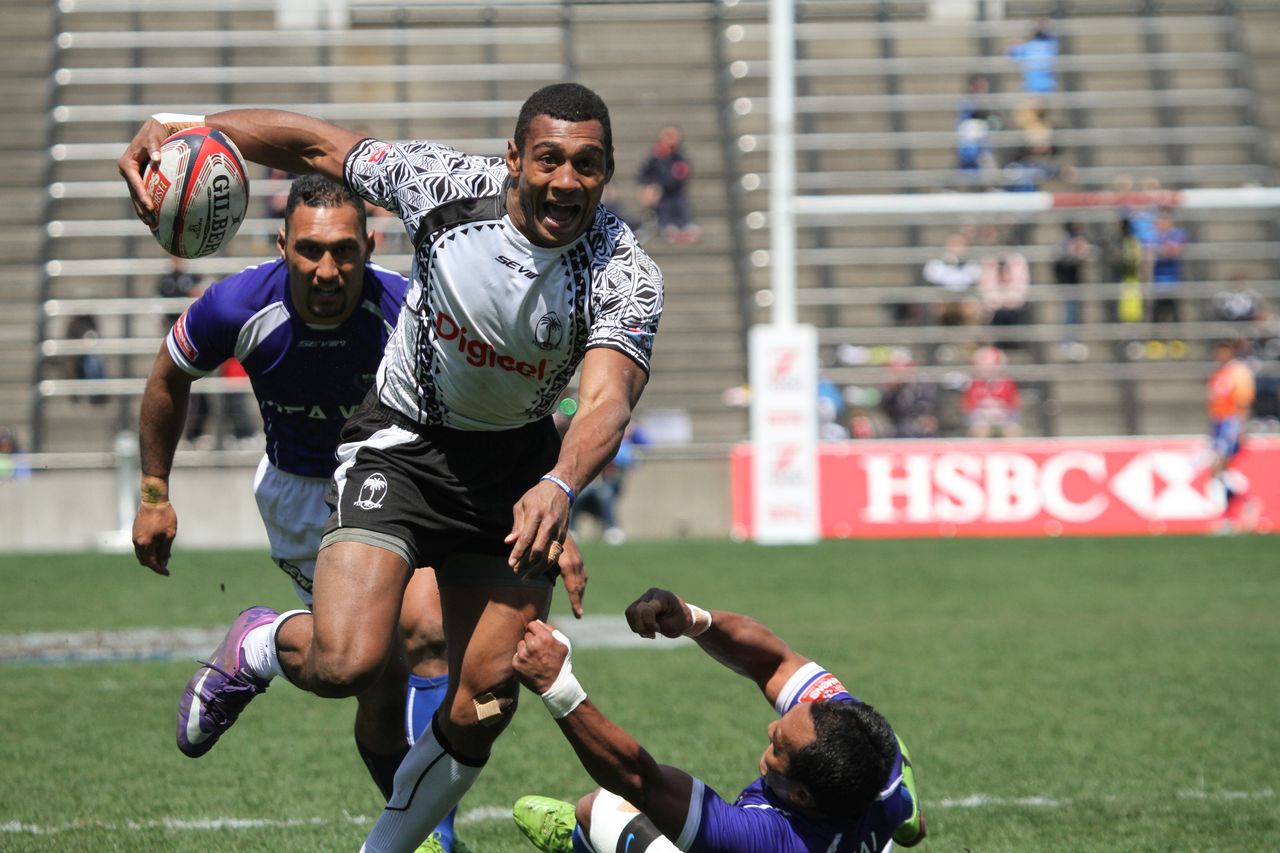 A Fijian player steps around opponents on the way to the try line during the 2015 Tokyo Sevens. (© Ōtomo Nobuhiko)

The increased level of competition can also be seen in the World Rugby Sevens Series, an annual series of international tournaments. Over the last decade, men’s teams from non-typical rugby nations like Kenya and the United States have grown in stature and started to challenge for regional titles, as have Canada in the women’s competitions. 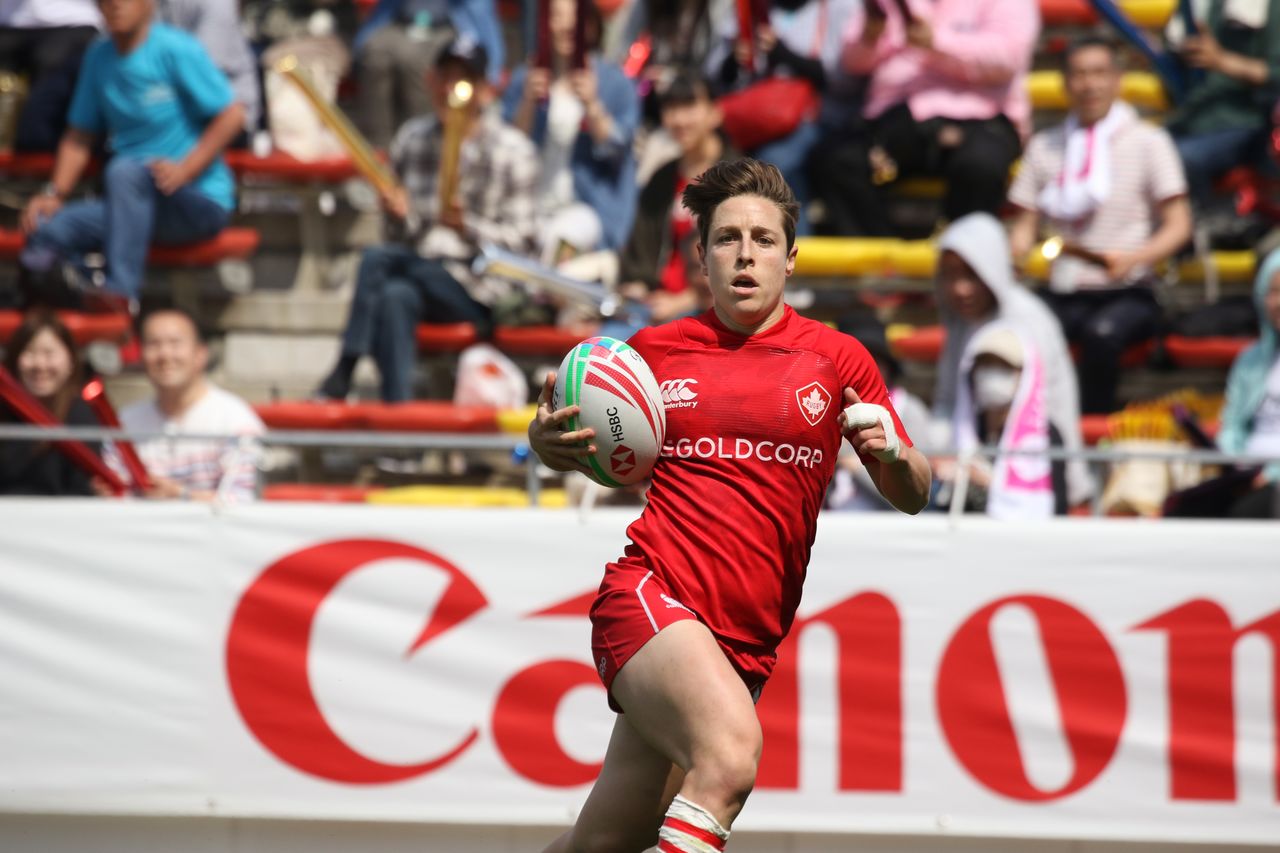 The Japanese men’s impressive fourth-place showing at the Rio Olympics has generated high expectations for the Tokyo games. However, the sevens program had to take a back seat in the runup to the 2019 Rugby World Cup as focus shifted to building the 15-a-side squad. The sevens team saw its available pool of talent diminish as many of Japan’s leading players prioritized playing in the World Cup and the Top League, much to the detriment to the squad’s competitiveness. Japan finished a dismal fifteenth at both the 2018 Rugby World Cup Sevens and the 2018–19 Seven Series, despite impressive efforts to qualify for the competitions.

This reluctance of top player to compete in the sevens format goes beyond just the World Cup, though. University and corporate-sponsored teams are the backbone of Japanese rugby, and clubs have traditionally been reluctant to allow players to join sevens competitions. With the Olympics approaching, though, a number of star players have expressed interest in competing in the sevens format.

Notable members of the team are Fujita Yoshikazu, who plays for the Panasonic Wild Knights of the Top League, and Matsui Chihito, formerly of the Suntory Sungoliaths. In 2016, the pair had their Olympic dreams dashed when they were dropped from the 12-man squad that went to Rio. This bitter disappointment still fresh in their minds, the two are eager to make the final cut and join the action on the pitch in Tokyo. 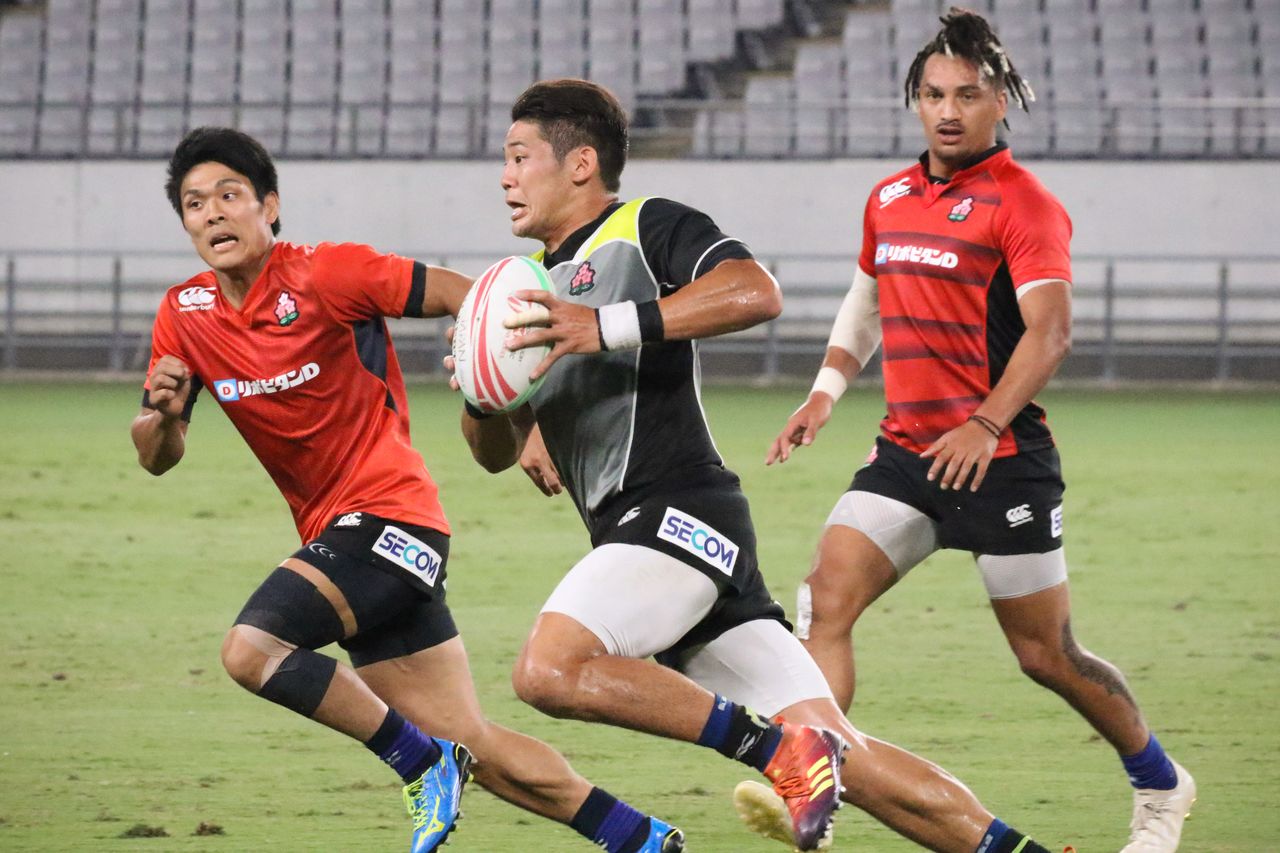 Fujita was first tapped for Japan’s 7- and 15-a-side squads while still a high school senior. He went on to play college ball for Waseda University, and in his last year at the school he was part of the Brave Blossoms side that competed at the 2015 World Cup in England. Although he is returning to the team after a long break from international competition, his keen ability to read the pitch and offensive prowess make him a dangerous player in the open field. Fans enjoyed a taste of Fujita’s devastating talents when he won MVP honors in Japan’s championship run at the second leg of the World Rugby Sevens Challenger Series in Uruguay in February of this year.

Matsui, on the other hand, is a pure speedster (his best time in the 50-meter sprint is 5.7 seconds). Once he turns on the juice, there are few opponents on the pitch who can match his pace. 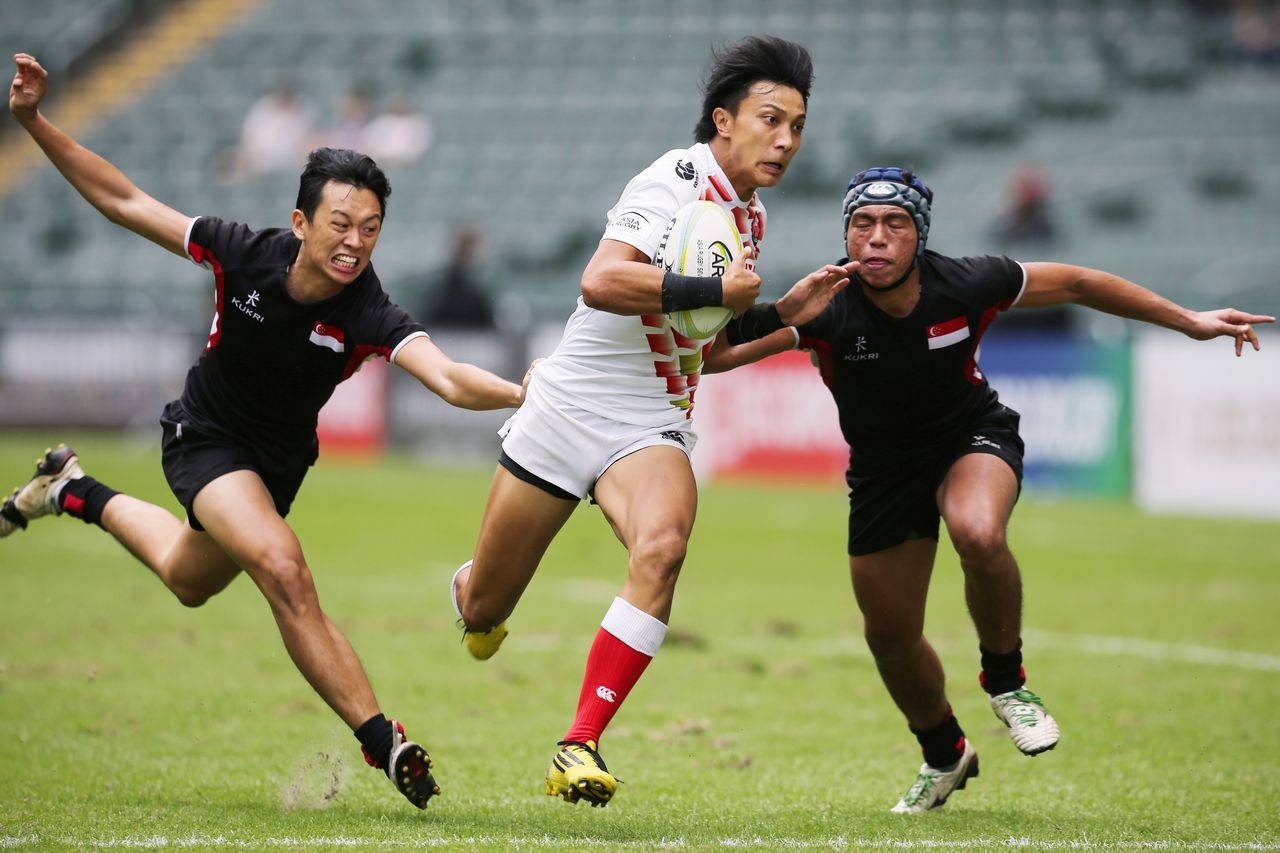 Another potential key player for Japan is Hayashi Taisei, who is blessed with power and speed as well as an infectious positive outlook. In 2018, he retired from the Canon Eagles of the Top League to devote himself entirely to rugby sevens. An unusual character, he does not maintain a home base for training nor does he belong to a professional side, but instead divides his time between training camps and overseas tournaments. He is also known to take to social media to answer calls for training partners for athletes in different sports and to promote his “step challenge,” which encourages players to post videos of their tackle-evading skills. 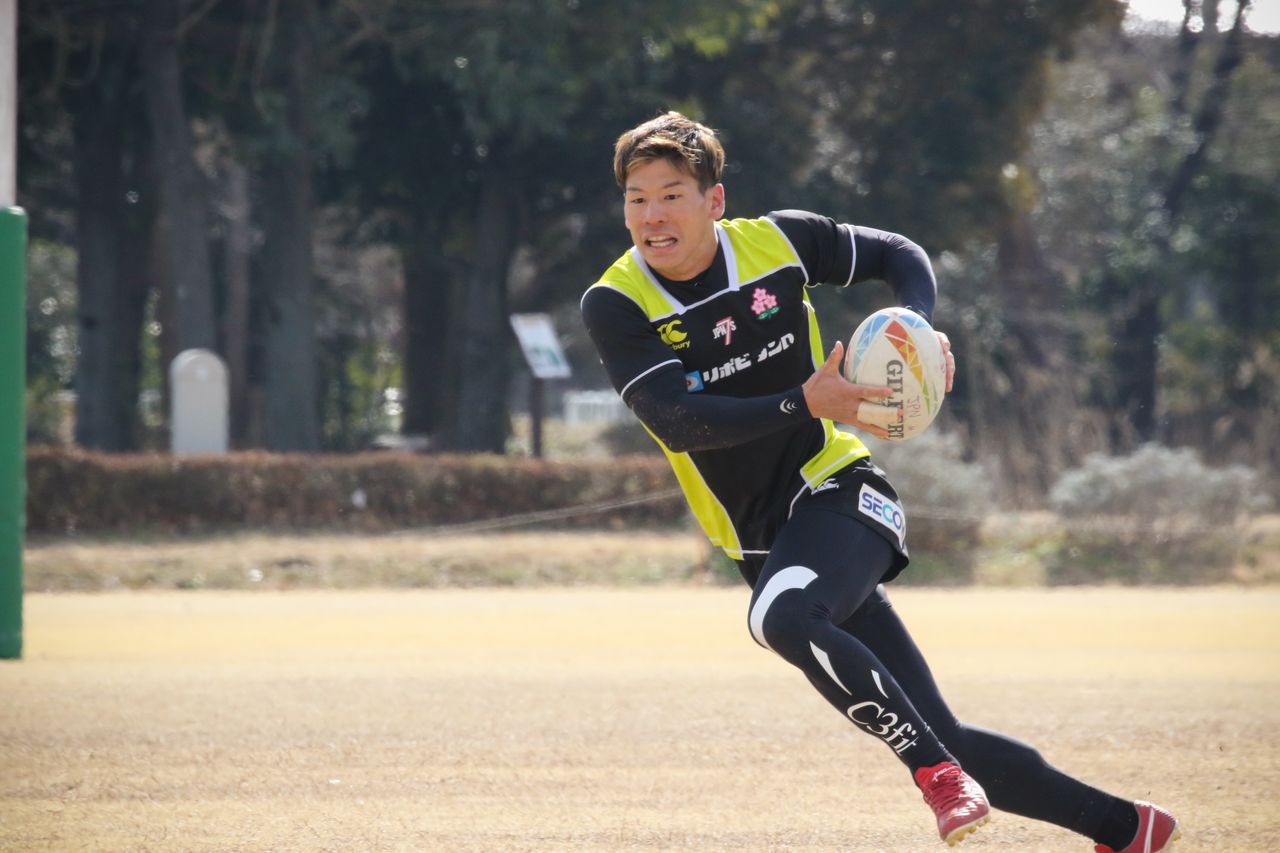 Japan’s Sakura Sevens are determined to improve on their tenth-place finish at Rio and have brought in younger players and transplants from other sports to bolster defensive might as well as deepen the bench ahead of the Tokyo games. The squad has struggled against speedier, physical opponents like New Zealand. However, at the World Rugby Sevens Series in Sydney in February, Japan succeeded in holding the Black Ferns Sevens to a scoreless first half. Although the Japanese side went on to lose the match 28–0, the performance illustrated that the team is making strides in the right direction.

An important factor in the growth of the national team and development of the seven-a-side format overall has been the introduction of the Taiyō Seimei Women’s Sevens, a domestic series that was launched in 2014. The 12-team competition consists of four tournaments and follows the same structure as the World Rugby Sevens Series. The one-of-a-kind league has helped identify and develop new talent and has also attracted top international players. 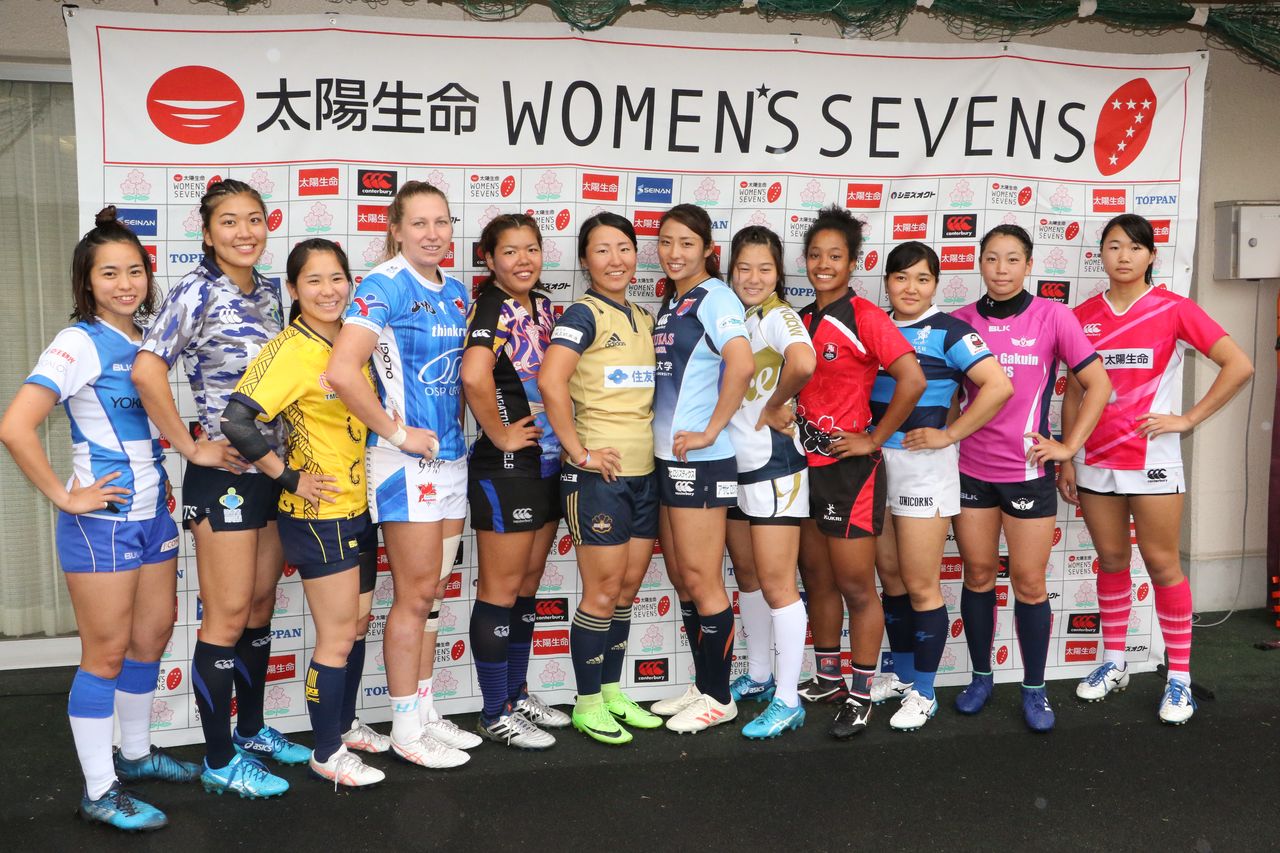 Representatives from the 12 teams pose ahead of the start of the Taiyō Seimei Women’s Sevens series. (© Ōtomo Nobuhiko)

One of the rising stars for the Sakura Sevens is Matsuda Rinka. The daughter of Matsuda Tsutomu, a former Brave Blossom and veteran of four Rugby World Cup campaigns, she grew up with the sport. She joined the youth academy in junior high and made her national team debut while a high schooler. Currently a student at Nippon Sport Science University, she brings speed and power to the team, using these to break through defensive lines and to shut down opponents’ attacks. 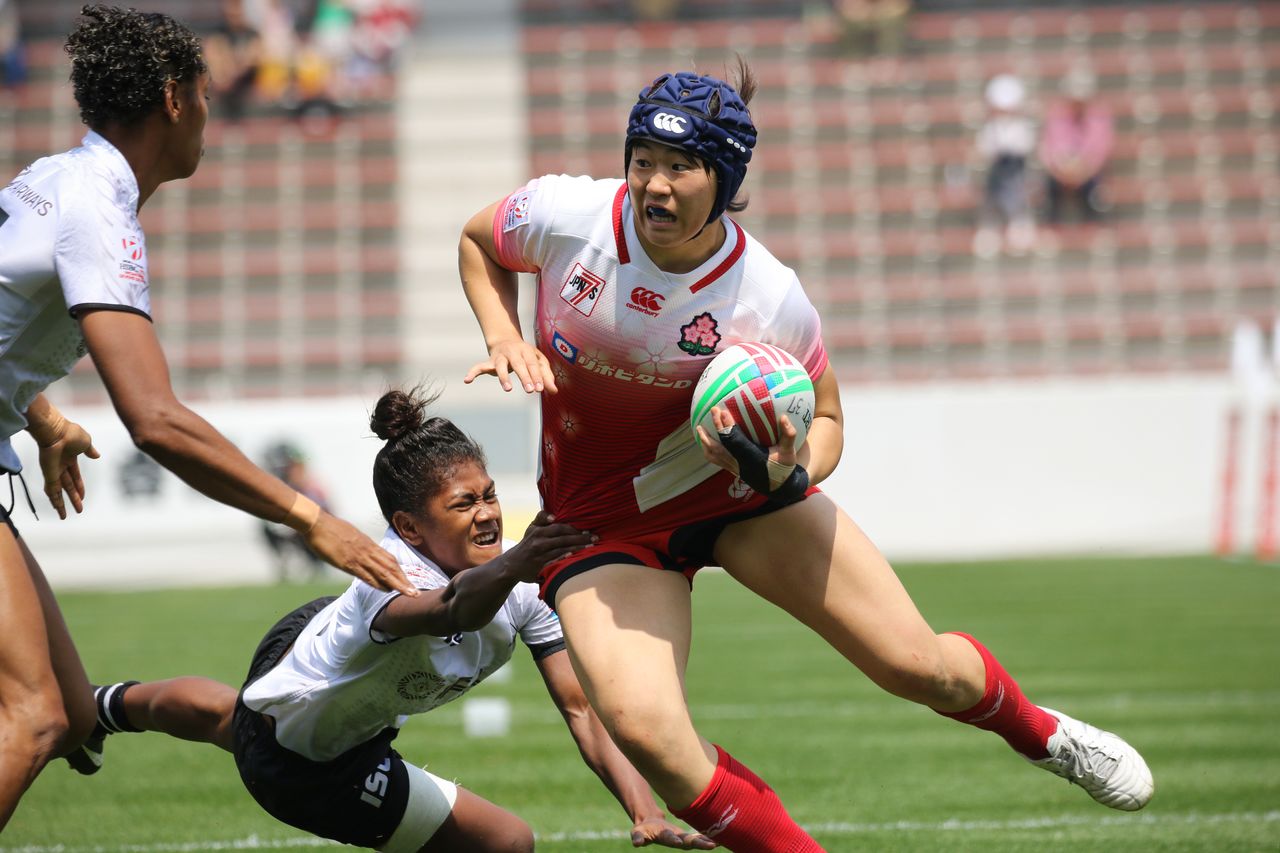 Another player to watch is Ōtake Fumiko. A relative newcomer to rugby (she competed in the heptathlon up into high school), she has the gift of speed. Her positive mindset also makes her a leader on the squad. 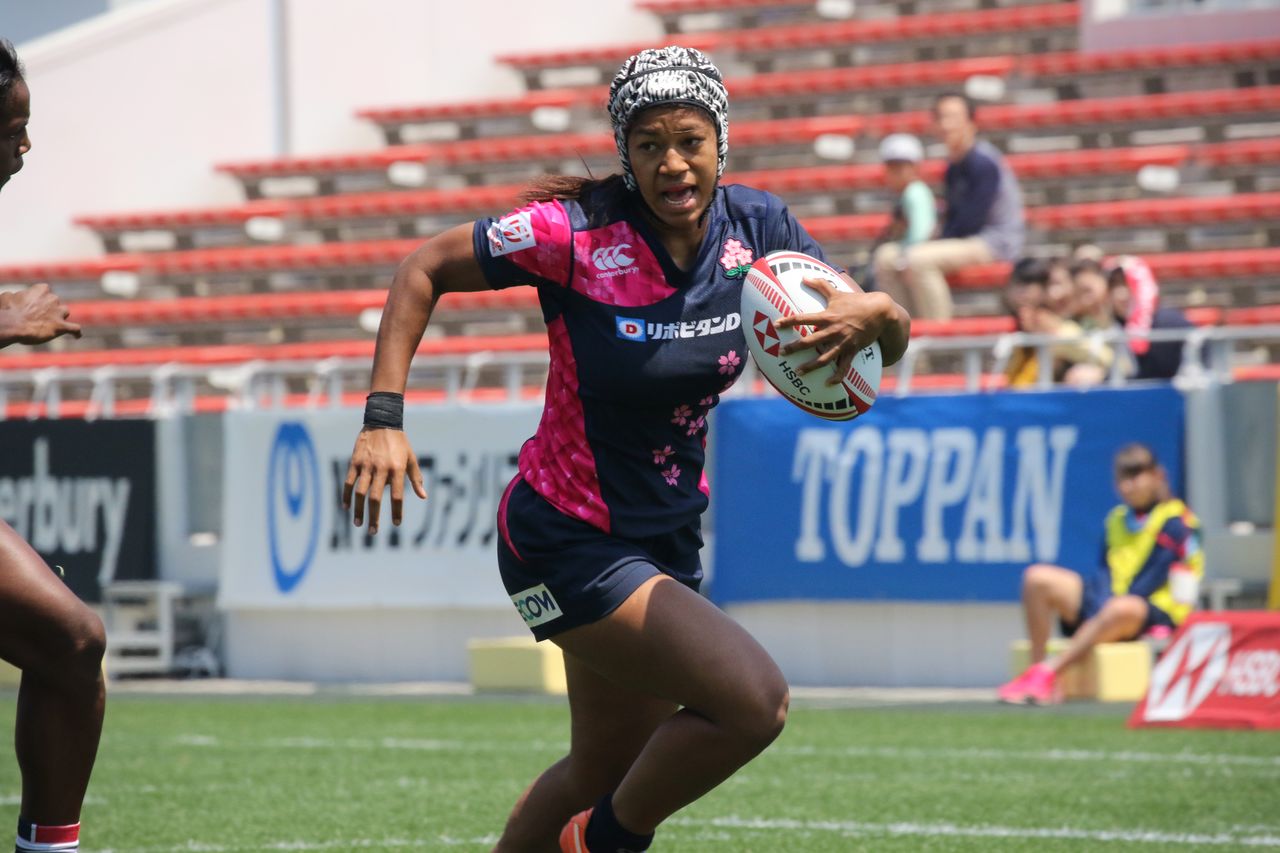 Japan has yet to taste Olympic glory in either men’s or women’s rugby sevens, but as the historic performance by the Brave Blossoms at the 2019 World Cup demonstrates, home-pitch advantage has the potential to generate unforgettable performances. There are other factors, such as the different tournament format and scale of the games, that may also work to Japan’s advantage.

Men’s national team coach Segawa Tomohiro stressed the “Olympic factor” ahead of Rio, saying that teams who normally are top dogs at competitions have to adjust to sharing the stage with the rest of the sports world. This along with restrictions like fewer supporting staff and unpredictable factors like weather conditions on the day can erase many of the advantages dominant squads typically enjoy and place teams on more equal footing. This was at play in Japan’s win against New Zealand, a match that saw the normally dominant All Black Sevens fail to find their rhythm.

With the ongoing pandemic halting international events for the foreseeable future and raising the possibility that the Olympics might be canceled outright, though, players and teams are having to deal with an unprecedented level of uncertainty. While all countries must adjust to these circumstances, Japan can turn these to its advantage in Tokyo as the home team.

It remains to be seen how events will unfold, but Japanese rugby fans have their fingers crossed that the games will go ahead as planned and that the Olympic momentum will propel the men’s and women’s sevens teams into medal contention, if not to the top of the podium.