Kumamoto’s Flooding and the Changing Face of Disaster Response

Society Disaster Technology Sep 1, 2020
In early July extensive flooding struck southern Kumamoto and other parts of Kyūshū. The evacuation and disaster recovery measures since then have been the nation’s first in the midst of the COVID-19 pandemic. Only Kumamoto residents are allowed to volunteer for the recovery work, and online meetings to make up for the resulting labor shortage are part of a new style of disaster response for the coronavirus age.

Every evening at six, a group of around 40 people gather in front of their computers. They include volunteers who’ve just finished their work on-site; officials from Kumamoto’s prefectural government, as well as those from the national cabinet office, Ministry of Environment, and more; and staff from nonprofit and nongovernmental organizations. After everyone exchanges greetings, each organization offers a report on their situation and discusses any needs that arise.

In one example, a member sent out a plea: “Elementary and junior schools in the village of Kuma are set to restart on August 3, but there aren’t enough school supplies. I don’t suppose we can get those right away?” Another answered, “Let’s send out some feelers.” The next day, the problem was solved.

Individuals who want to help are also welcome. At one meeting, a Kumamoto prefectural employee dropped in and offered to use his computer skills to help recover data from water-damaged computers in his free time. The meeting chair expanded on that with a proposal to load the recovered data onto used computers to give to the original owners. And with that, a new cooperative project with an IT specialist volunteer group was born.

Issues discussed at the 90-minute meetings can be quite specific, and come directly from workers in the field. They include points as diverse as the removal of mud and ruined floors from flooded homes, provision of drinking water supplies, and refuse disposal consultation, all the way down to supplying people with air conditioners and wireless routers. 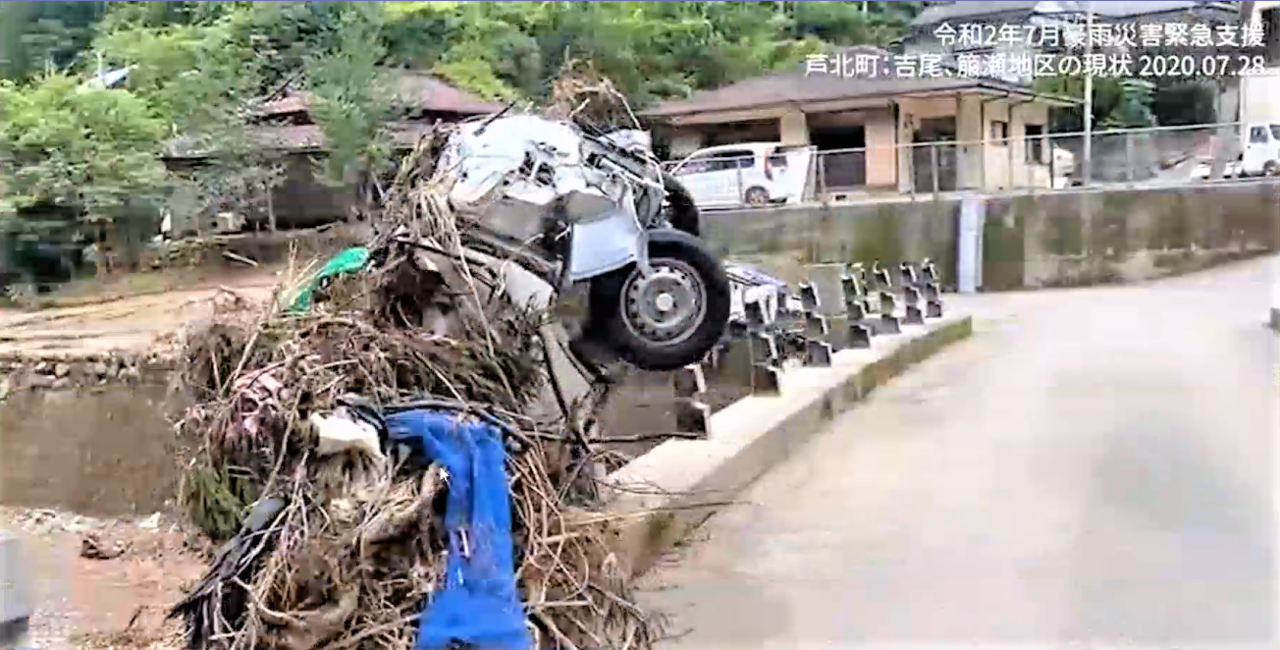 With “once-in-a-century” natural disasters coming every year recently, modern disaster response could not function without intermediary support organizations, which help to match the needs of disaster victims with the support capabilities of volunteers and organizations. KVOAD was established to fill that function after the Kumamoto earthquakes of 2016, and ever since it has served as a hub for volunteer organizations inside and outside the prefecture.

The Importance of Intermediary Support

KVOAD Representative Director Higuchi Tsutomu is a native of Hita, in Ōita Prefecture. While employed as an engineer for a construction consulting firm in the city of Kumamoto, his work with environmental assessments made him aware of residential protection activities. He took a position with NPO Kumamoto to help coordinate with other nonprofits and train volunteers, and eventually left the corporate world completely to found a social welfare service company. Just when that company got a nursery school up and running, though, the Kumamoto earthquakes hit.

He then established a quake support group called Hinokuni Kaigi and toured disaster areas on the advice of Myōjō Tetsuya, executive director of NPO Japan Voluntary Organizations Active in Disaster. While he worked on environmental improvements for 118 evacuation centers around Japan, he realized the need for a particular form of intermediary support organization for Kumamoto.

“Around two months after recovery work began, the number of national volunteer organizations active here began to drop from its peak of 250. It was right around then that a magnitude 5.3 earthquake hit Hakodate, Hokkaidō. It made me realize we wouldn’t be able to depend on organizations outside Kumamoto forever,” Higuchi says, as he explains the reasoning behind establishing KVOAD.

He had been holding meetings of Hinokuni Kaigi twice a week at the Kumamoto Prefecture Welfare Center, but moved the meetings online as an anti-COVID-19 measure. Once they began meeting virtually, they found the format offered benefits not found offline. Not only can they match needs with support more quickly, but they can share information with members all over Japan in real time and receive advice immediately. People can even join while they’re on the move in the disaster area using their smartphones. It’s also easier to join or leave part-way through. Every participant introduces themselves and shares information at each meeting, so everyone learns to recognize everyone else’s face. Meeting notes are kept in real time, date-stamped, and posted to the organization’s website.

Only recently, the group had been discussing how difficult it would be if a natural disaster struck amid the pandemic, and then came the torrential rains of early summer 2020. 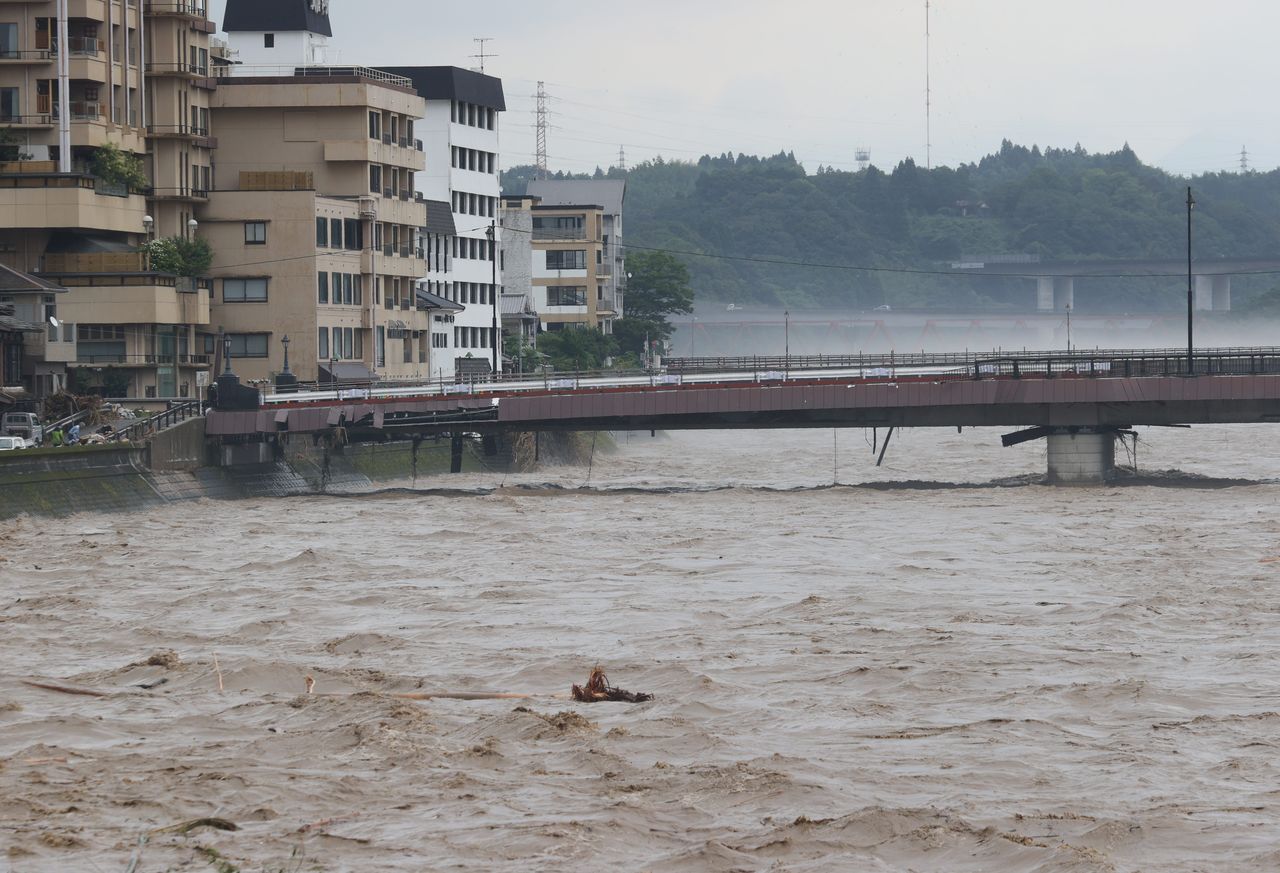 KVOAD responded quickly. On July 7, they held a Hinokuni Kaigi meeting to specifically discuss the July 2020 flooding, and NPOs and NGOs from all over Japan took part. It has met every single evening since then, and has seen participation grow to include government organizations, research bodies, and the mass media.

Experience has shown that that the victims of disaster need more than just daily supplies. Mental health care is also vital. The Kumamoto city NPO Keichō Net Key Station offers volunteers to help counsel the elderly and disabled, as well as those who help prevent dementia. However, the current COVID-19 crisis makes it difficult to visit the evacuation centers in person. When Keichō members said they wanted to try offering counseling online, a KVOAD advisor recommended: “The Bar Association has made plans to offer legal consultation online, so why not work with them? We can connect you to someone to supply you with equipment like wireless routers.”

Another consultation came regarding a large number of high school girls who came to the disaster volunteer briefing. They wished to join but were unsure if they could be of help, or would just end up getting in the way. A representative from the Okayama NPO Center responded, “We learned from the 2018 Kurashiki floods that disaster victims suffer emotional trauma. For elderly evacuees, talking with young people can be very soothing.”

Increasing Requests to Allow Outside Volunteers

Higuchi, looking back on all they’ve been doing the last month, feels reminded of the hard work needed for recovery. “Compared to the Kumamoto earthquakes, we’re relatively shorthanded, but right now I think we’re keeping up.” 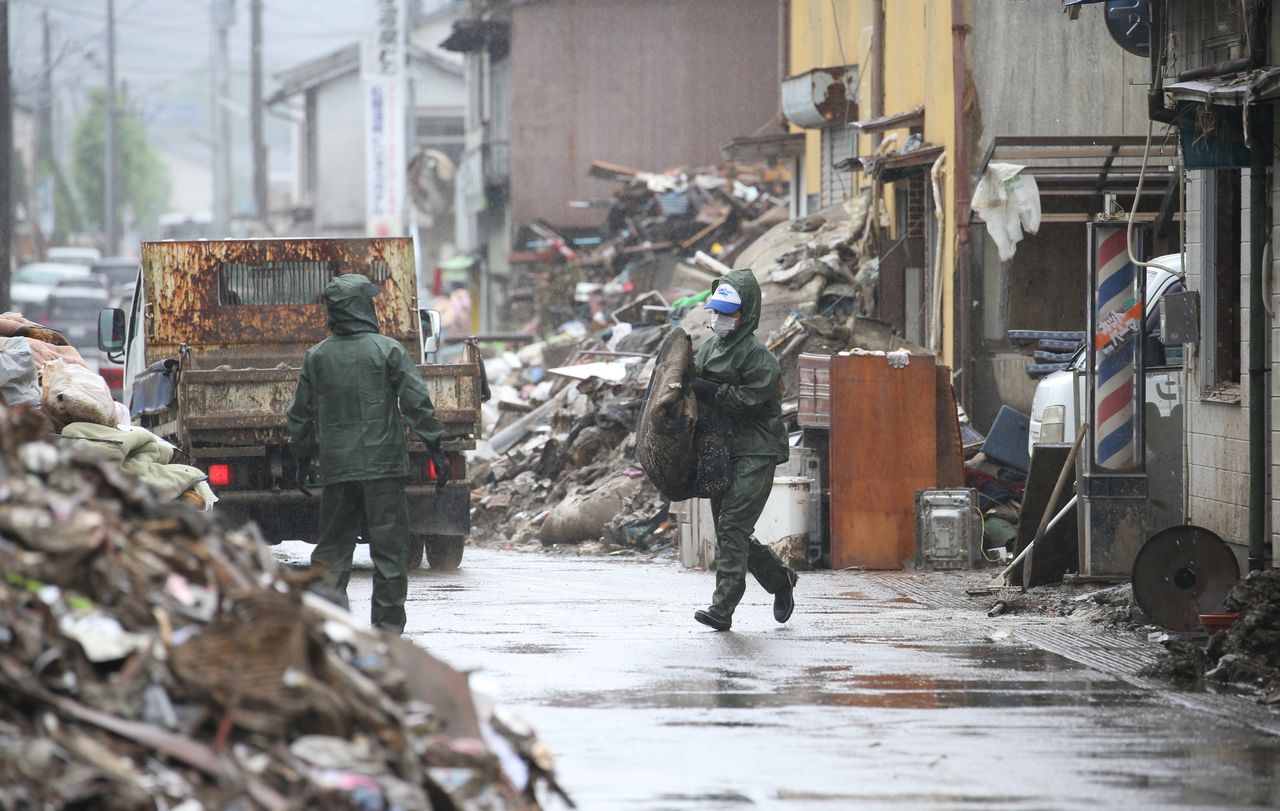 Volunteers cleaning up a residential neighborhood damaged by flooding in Hitoyoshi. (©Jiji)

At the symposium, Director Kunizaki Nobue of the Risk and Crisis Management Educational Institute said: “We’ve assisted in many disaster relief efforts, but this time the effort is clearly short-staffed. Is there any other solution aside from allowing all volunteers who have negative results from a PCR test?” Co-representative Director of Tasukeai Japan Ishikawa Jun’ya added, “There were 50 direct fatalities from the Kumamoto earthquakes, but 220 disaster-related deaths from injuries or illnesses caused or worsened by evacuation. The torrential rains and floods have caused far more direct deaths this time, and if we can’t offer sufficient support then there’s a real danger of related deaths also outstripping the earthquake toll.”

Of course, KVOAD is not rejecting volunteers from outside the prefecture across the board. Those in the so-called pro volunteer sector, or those with professional skillsets like heavy-equipment licenses, can be approved on request from local government in the disaster area, and from late July two such groups have joined the relief efforts. However, individual volunteers are still only allowed from within the prefecture as an effort to stem the spread of the COVID-19 pandemic. The reasoning behind this is that the PCR tests are not 100% accurate, and outbreaks among volunteers and evacuees must be avoided at all costs.

On July 29, the Kumamoto Nichinichi Shinbun published the results of a survey of prefectural residents. It showed that 70% percent of residents, and 80% of those in disaster areas, support the limiting of volunteers to those from inside the prefecture. It implies that anxiety over the spread of the pandemic outweighs recovery delays that lack of volunteers may bring.

A Chance to Rethink the Nature of Volunteering

“This flooding disaster has given us an opportunity to rethink what disaster volunteering can be,” Higuchi says.

After the Kumamoto flooding, Yamagata Prefecture also saw record rainfall and flooding of the Mogami River. In August, the typhoon season begins in earnest, and now all of Japan is dealing with anxiety about flooding. “If the predicted Nankai Trough earthquake hits, the disaster zone would extend from the Kantō area to Kyūshū. No one will be able to move, and we have no idea how we would deal with it. These floods served as a wake-up call.”

There is a phrase in the Kumamoto dialect, dekitashiko. It means “Just do what you can,” and it seems particularly appropriate now. There will be no dramatic end to the COVID-19 pandemic. It will continue at least through this year, and recovery work is also going to drag on. “You can’t keep at a task if you push yourself too hard. Supporters can’t operate at 100 percent for a year or two. Helping out once a week, even once a month, is fine, as long as they can keep up their work. The ability to do that is what really determines a community’s strength.”

From the second week of August, KVOAD plans to hold regular online public meetings from the disaster zones and evacuation centers. “We want to bring people’s voices from on-site, and share the information they have and the issues they’ve faced. Hinokuni Kaigi is going to fully open to the public, and we hope you come to see what things are like in the disaster zone,” Higuchi says.