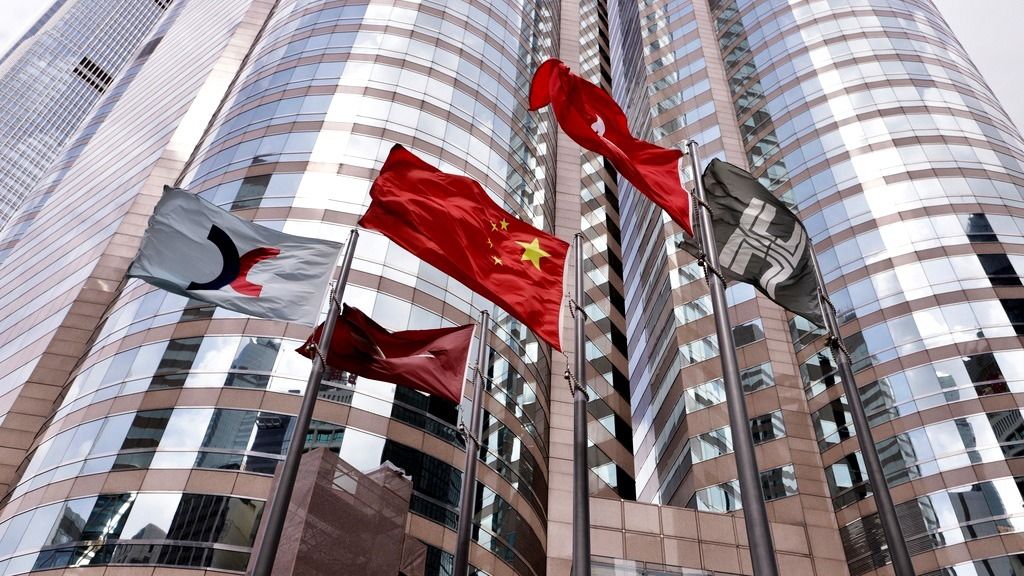 Hong Kong as a Key Battlefield in the New Cold War

Politics Economy Oct 21, 2020
The increasingly aggressive US posture toward China has led to sanctions against Hong Kong officials for their roles in the recent crackdown, as well as the growing rejection of Chinese technology giants like Huawei from US markets. But its primary target is Hong Kong’s role as an international financial center. What is the next American step on this battlefield of the new cold war?

As a center for international finance, Hong Kong is the main battlefield for the new cold war between the United States and China. At the end of June 2020, President Xi Jinping forced Hong Kong’s administration to accept a new National Security Law, intended to curtail many of the current freedoms enjoyed there. In response, President Donald Trump signed the Hong Kong Autonomy Act on July 14, which includes financial sanctions against China itself.

The United States is also using the dollar, the key international currency, as a weapon to take direct aim at Chinese officials and financial institutions, but it isn’t stopping there. It is also working to block China’s ability to use the dollar altogether.

The Hong Kong Autonomy Act places sanctions on the party officials who advanced the Security Law by freezing their assets and blocking them from entry to the United States. It also forbids all dollar loans from US financial institutions to any institution that is connected to the repression of Hong Kong. The United States’ focus on economic sanctions comes because China’s currency system is in a very real way connected to the dollar, and to understand this one must discuss how Hong Kong’s role in international finance has supported that system.

The People’s Bank of China buys up all of the dollars that enter China as a matter of principle, using them to back the yuan. Yuan taken into Hong Kong from mainland China can be freely converted to US dollars via the Hong Kong dollar, which is pegged to the greenback. Hong Kong thus represents for China a financial tool to convert its currency to highly valuable dollars, making the special administrative region a true example of the goose that lays golden eggs.

Even with the development of Shanghai’s financial markets, over 70% of all international yuan exchanges occur in Hong Kong. It is also the route by which over 60% of foreign direct investment reaches the Chinese mainland. The majority of foreign transactions that China’s state owned banks, like the Bank of China, conduct are done from Hong Kong using US dollars.

After Mao Zedong’s Proclamation of the People’s Republic of China at Tiananmen Square on October 1, 1949, he approved Zhou Enlai’s orders to the 12,000-strong People’s Liberation Army Dong River Column to stop at Shenzhen, rather than crossing on to Hong Kong. Eventually, China and Britain reached an agreement that guaranteed Hong Kong special market and financial treatment. In the end, China took the long-term view in terms of conquering Hong Kong.

Foreign investment in China was first made possible when Deng Xiaoping set out to reform the Chinese economy at the end of the 1970s, but the primary base for foreign investment was Hong Kong. Deng issued currency, the renminbi, with exchange rates fixed to the dollar, which expanded China’s economic resources, and created a socialist market economy model for high economic growth. With approval from Washington, China was accepted into the World Trade Organization, and has since built a position as factory to the world.

The George W. Bush and Barack Obama administrations were both enticed by the massive Chinese market, and China’s balance of trade with the United States grew massively in China’s favor. This trade imbalance not only expanded China’s economy, but also helped pay for military expansion, and made possible the Xi administration’s outward expansionist moves like the Belt and Road initiative and the occupation of the Spratly Islands.

The confrontation between the United States and China got a kickstart with President Trump’s January 2017 inauguration. Trump always advanced an America-first principle, and put pressure both on US enterprises to return manufacturing to America, and on China to expand US imports. He first imposed trade sanctions in 2018, then in December 2019 the United States and China reached an agreement to reduce the annual trade deficit from the $300 billion range to $200 billion.

The trade imbalance in China’s favor has been the biggest generator of the dollars needed to back the yuan, which is why this US-China trade war involves conflict on the currency front, as well. This was made more overt after the protests that began to sweep Hong Kong from the summer of 2019, when its young people began calling for more democratization for the region. The protests were sparked by the Xi administration’s forcing through of the 2019 amendments to the Hong Kong Extradition Bill, which would have allowed China to directly impact Hong Kong’s law enforcement. Hong Kong officials, under pressure from Beijing, then tried to suppress the demonstrations by force.

In fall 2019, Washington adopted the Hong Kong Human Rights and Democracy Act of 2019, which also amended the United States–Hong Kong Policy Act. The amended conditions include the power to block conversion between US and Hong Kong dollars, which could conceivably trigger a global financial crisis.

At the same time, the Hong Kong Autonomy Act can also be seen as a measure to focus that damage and keep backlash to a minimum. Party officials who have family living overseas, in the United States or elsewhere, and transfer huge sums of money to them risk having their dollar assets frozen. In addition, financial institutions with a presence in Hong Kong whose dollar loans end up involved in repression in Hong Kong have to fear being unable to raise dollars, regardless of their national origin.

The Xi administration’s secret weapon for bringing in foreign capital is baked into the nature of Western capitalism: the supremacy of self-interest.

According to a July 23 report in the Wall Street Journal, Xi began preparing the Hong Kong Security Law last summer, when Hong Kong’s prodemocracy protests were flaring up. At that same time, the US government began closer checks of the often opaque financial records of Chinese companies listed on US stock markets. This has encouraged many of them to additionally list on the Hong Kong market with its more relaxed standards, to defend against possible Wall Street delisting in the future.

Stock Connect, the link between the Shanghai and Shenzhen stock markets and Hong Kong’s, allows reciprocal stock trading denominated in yuan. Stock Connect trades began flooding the Sinicized Hong Kong market from July, leading to a boom in Hong Kong trading. The claim now is that these new listings from China are a boon to the Hong Kong market, as they allow access to the high-growth Chinese market.

The growth in Hong Kong’s stocks offers a powerful propaganda tool for the Xi government. Even as the international community shows anxiety over the restrictions the Security Law places on the free exchange of information, Xi’s administration is able to claim that it will make Hong Kong more stable, and that as Chinese companies continue to be listed, they will bring with them the full potential of China’s future growth, offering opportunities for safe investment. In this way it displays its ability to use the yuan, without the dollar intermediary, to sway markets.

The claims appear to be effective. HSBC, a British financial firm headquartered in Hong Kong, has voiced its support for the Security Law, while Wall Street firms like Morgan Stanley are rushing to underwrite new Chinese listings and broker trades of Chinese stocks.

While the world is in turmoil from the COVID-19 pandemic, China has been quick to put its economy on the path to recovery, albeit not so robust as it might like. However, a lack of foreign assets remains a gap in its strategy. The ratio of foreign assets to the outstanding balance of issued yuan fell below 100% of total assets in 2015, and below 70% at the end of 2017. It remains in that range. As a result, the pandemic recession has continued to hold back financial growth, and governmental financial stimulus has been lackluster. 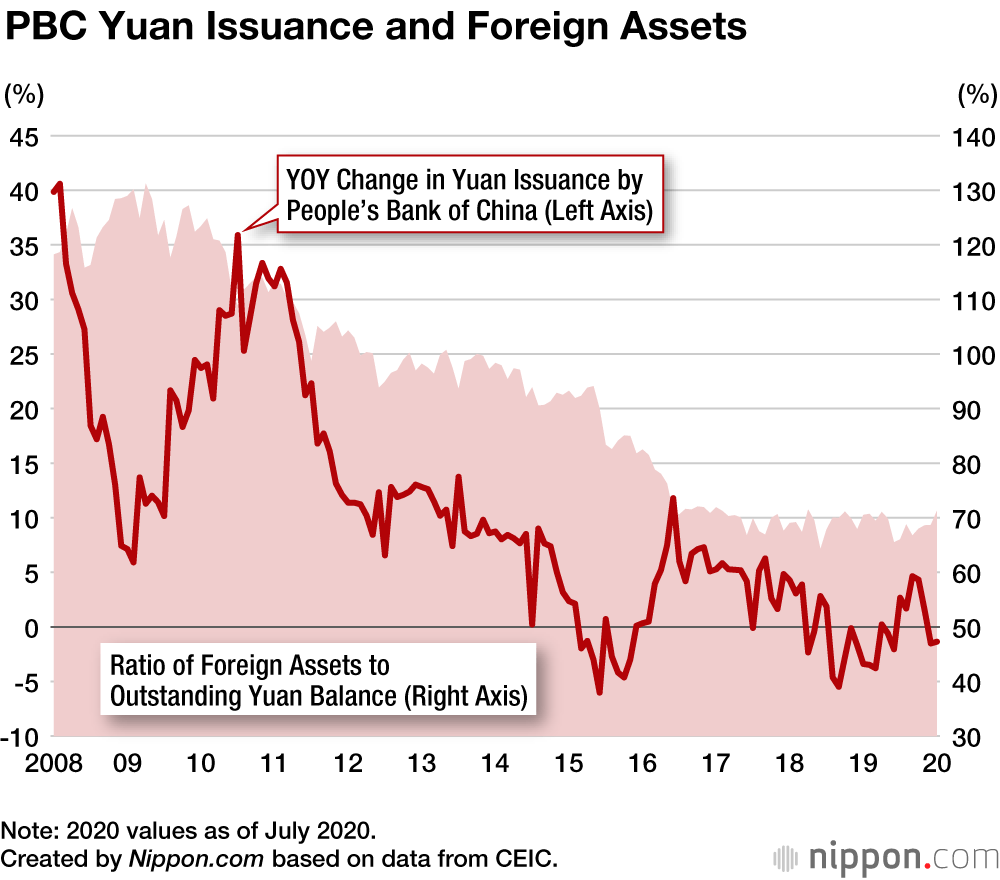 The primary cause of the drop in foreign reserves is capital flight, which has been caused by several factors. China devalued the yuan in summer 2015, and later there was a downturn in the Chinese real estate market. The US-China trade war then kicked off in summer 2018. The Xi administration is trying to stop this capital flight by cracking down on illicit profit by high-ranking party officials.

Under-the-table profits made by party officials or their relatives are often exchanged for dollars for transfer overseas. Hong Kong is a common stopover for such flight, and so the Xi administration’s efforts to put Hong Kong under direct control via the National Security Law have motivations beyond simply suppressing prodemocracy movements.

In Japan, there are those hoping Tokyo can become a financial center in Hong Kong’s place, but these hopes are founded on a basic misunderstanding of that other, less legitimate, role it plays. The true hubs of international finance remain New York and London. The Asian centers in Hong Kong and Singapore came about largely because they offer safe havens for unrestrained greed, for example by not collecting taxes, and allowing the kind of capital flight China is now fighting.

The Xi administration and Hong Kong’s pro-China faction also insist that unifying Hong Kong and China will allow its markets to earn more than ever. If Tokyo does have a chance to replace that profitability, it can only come from stronger US economic sanctions and a trade war that grows to the point where the peg is abolished between the Hong Kong and US dollars. That will end the flight route, and the profits.