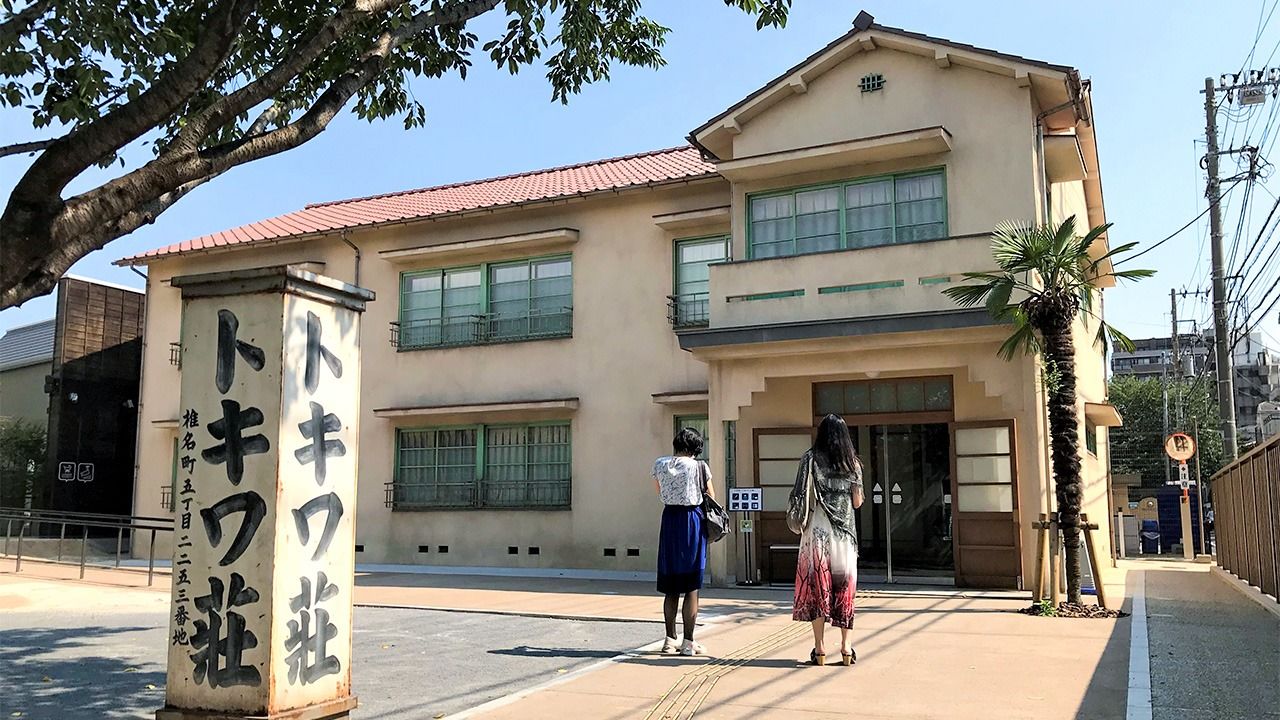 Culture Entertainment Anime Sep 30, 2020
Tokiwa-sō is a boarding house where a number of aspiring young manga artists, led by the famed Tezuka Osamu (creator of “Astro Boy”), roomed in the 1960s. Chronicled in their works, Tokiwa-sō lived on in the hearts of manga fans even after its demolition in 1982. Now, this legendary cradle of comics culture has been re-created as the Toshima City Tokiwa-sō Manga Museum.

A Creaky Staircase Back to the Sixties

“This was it: Tokiwa-sō. It felt incredible—yet old and run down at the same time. I’d heard it was built only two or three years before, so there was no reason for it to give off this kind of impression; maybe it was the dull beige of the external walls. Cubbies for shoes filled both sides of the entryway: the left for residents on the first floor, the right for those on the second. Now one was mine. My room was on the second floor. Ascending the wide staircase, the first thing I saw was the shared toilet. Right next to it, the shared kitchen. The hall was wide and dark—come to think of it, that hall was one reason the place felt so much older and more run-down than it was. Then down the hall, on the right, second from the back: that was my room. Four and a half tatami mats in size, it was more than enough for me. Places for my futon, cookpot, kettle, desk, trunk, tote bag, yet still just enough empty space left over. Yes, this would do nicely . . .” (From Shōsetsu Tokiwa-sō no seishun [My Youth in Tokiwa-sō], by Ishinomori Shōtarō.)

A replica of the second floor, home to ten 4.5-mat sized rooms. Residents generally left their doors open all the time.

So wrote Ishinomori of his excitement at moving into the Tokiwa-sō from the tiny 2.5-tatami-mat room in Shinjuku’s Nishi-Ochiai that had been his home for a month after his arrival in Tokyo from Miyagi Prefecture. Were the late Ishinomori to set foot in the Manga Museum today, he’d certainly think he’d slipped back in time to the era that inspired that excitement.

It’s all here: the creaky staircase. The pit-style shared toilet. The shared kitchen, whose four-faucet sink served double-duty as a makeshift washbasin. This is where Ishinomori and his colleagues spent their youth.

Tokiwa-sō opened on December 6, 1952, at 5-2253 Shiinamachi in Toshima, Tokyo. (Today, the address is known as Minami-Nagasaki 3-16.) It was an utterly commonplace two-story wood-and-mortar rooming house. The rent was just ¥3,000 a month.

In 1953, the artist Tezuka Osamu moved in after being introduced by Gakudōsha, the publisher of Manga shōnen magazine. Soon many other up-and-coming manga artists followed. Terada Hiroo, author of Sportsman Kintarō, was introduced by Gakudōsha; then came Tezuka’s genius protégés, Fujiko F. Fujio (later of Doraemon fame) and Fujiko Fujio A (Kaibutsu-kun); Ishinomori (later to create Kamen Rider); Akatsuka Fujio (Tensai Bakabon), and more. In 1954, Tezuka moved to Namiki House in Zōshigaya, but the others remained, coalescing around their leader Terada Hiroo into what became known as the group Shin Manga-tō: “The New Manga Party.” Before long, everyone was calling Tokiwa-sō a Shangri-La for manga artists.

The Manga Museum occupies a roughly 300-square-meter plot in Minami-Nagasaki Hanasaki Public Park, also known as Tokiwa-sō Park. Weathering techniques were used to make this brand-new structure feel just like Tokiwa-sō did when Ishinomori and colleagues were living there roughly a decade after the original was constructed.

Rain- and dirt-spattered outer walls. Sun-faded tatami mats. An empty ramen bowl in the kitchen area, complete with the name of the Chinese restaurant the occupants used to order from Matsuba. Only one of three still known to exist from that era, Matsuba gifted it to the museum. 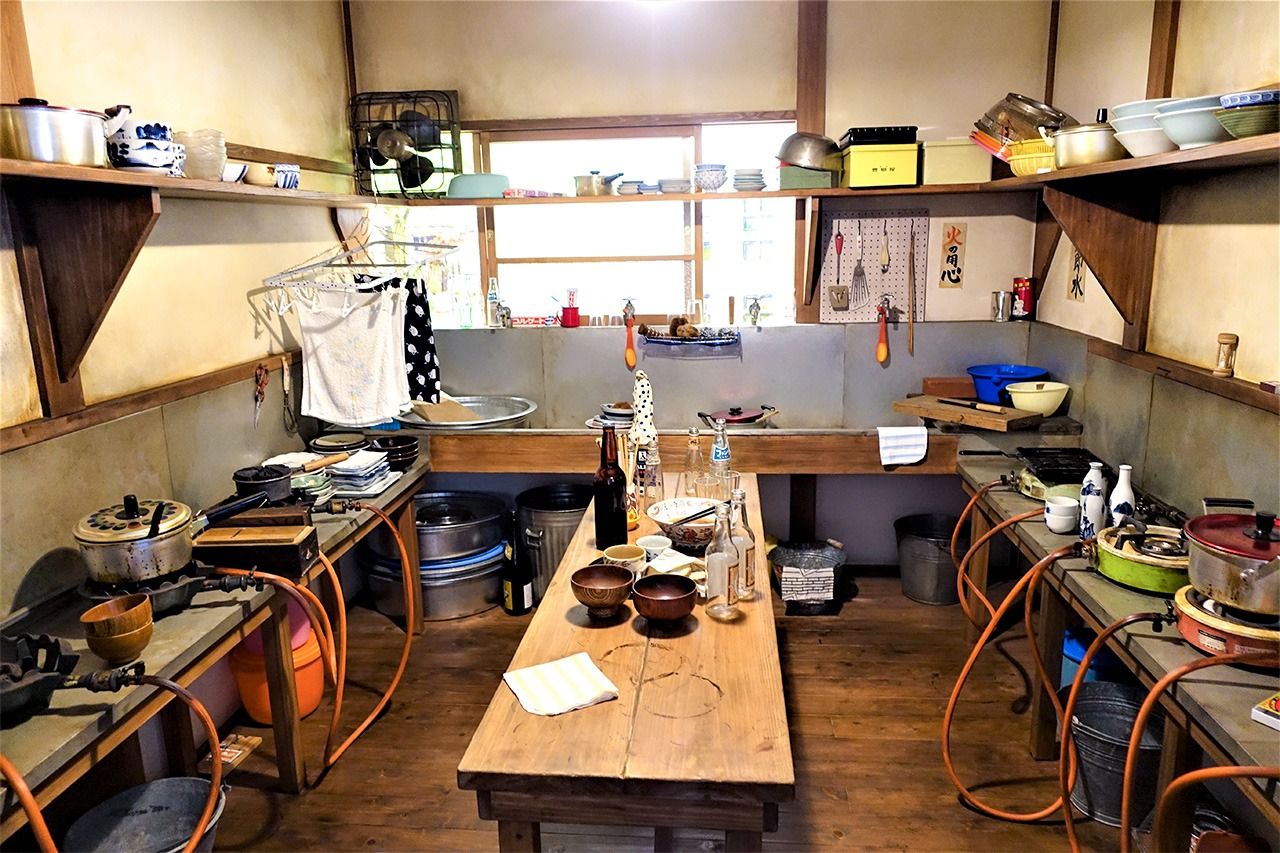 The shared kitchen is a faithful reproduction. Akatsuka and Ishinomori often bathed in the sink at rear.

Tanseisha, the same architectural and design firm that oversaw the renovation of the Ishinomori Manga Museum in Miyagi Prefecture’s Ishinomaki and the Yokote Masuda Manga Museum in Akita Prefecture’s Yokote oversaw the project. The firm’s Tansei Institute, a think tank dedicated to cultural spaces, began research in 2010. This was used as the basis for the restoration project.

According to the firm’s creative director, Katō Tsuyoshi, “the blueprints for the original building were lost, but we found photographs taken during the demolition, which gave us insight into the building’s structure. Internal and external photographs taken by residents helped in ascertaining grime and wear, but these were black and white, so we supplemented them with numerous interviews to achieve an accurate look and feel.”

Tokiwa-sō was wood and mortar. The current structure needed to use concrete to comply with modern building codes, so a double-wall structure was used to hide steel supports and make it look authentically “wooden.” The grain of the wood on the ceiling panels was replicated from a panel that Tezuka retrieved during the building’s demolition, illustrated with a drawing of himself and Sapphire from Princess Knight, and gifted to the local press club. This was supplemented with high-resolution imagery taken of ceiling tiles stored in the local folk museum.

One of the trickiest aspects was replicating the creaky sound of the staircase. “The manga artists developed a keen sense for the creak of the staircase because it meant an editor was coming with work, or to retrieve finished pages for deadlines,” esxplains Katō. “So we wanted to make sure to re-create that sound. We were so dedicated to replicating it that we incorporated the concept into the design from the very start.”

Why go to all the trouble? “Tokiwa-sō is a special place for fans, and we didn’t want to let them down,” replies Katō. “For example, we wanted it to feel lived-in, as though manga had actually been made here, right up to the moment it opened as a museum. So when we heard on Twitter that ‘the toilet looks like it really stinks’ we took it as a big compliment,” he laughs. 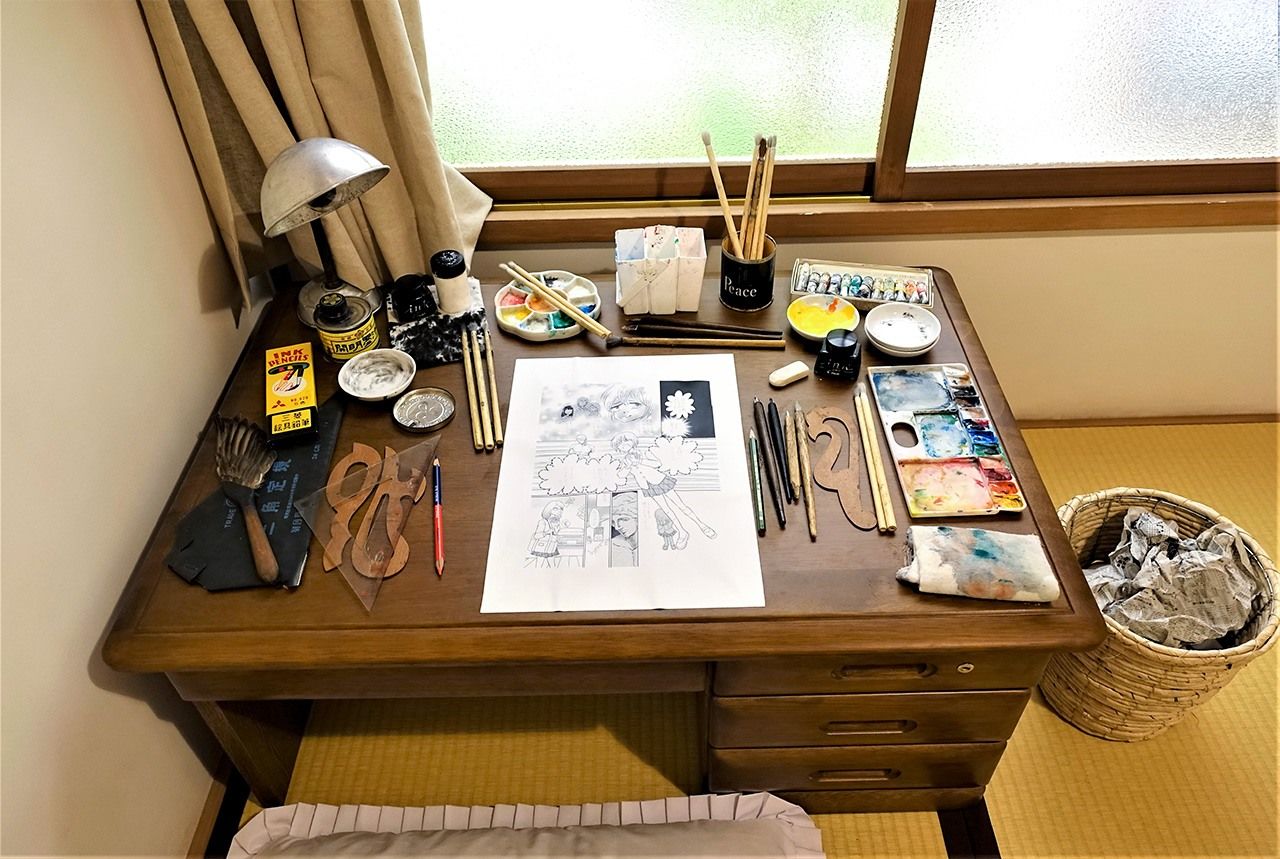 Akatsuka Fujio’s room has a desk with a page in progress that can be photographed for a souvenir.

But the Tokiwa-sō Manga Museum is more than just a retro-Shōwa-era apartment, or relic of the young artists’ dreams. That is something Satonaka Machiko, chairperson of the Japan Cartoonists Association, stressed as she chaired a management review meeting for the museum.

“Now Japanese manga and anime are respected around the world, but even today declaring an ambition to become a manga artist is likely to mark you as a little weird. Back then, it took an incredible amount of courage for the artists at Tokiwa-sō to make the decision to enter the world of manga. These rooms are small, but the occupants dreamed big. And within these walls they stimulated, supported, and cheered each other on while developing their own personal styles. No matter how much they loved the work of those who inspired them, they challenged themselves to make something different, something totally original. The essence of Japan’s manga and anime culture was distilled at Tokiwa-sō, and through holding exhibitions here we need to convey that to future generations, all over the world.” 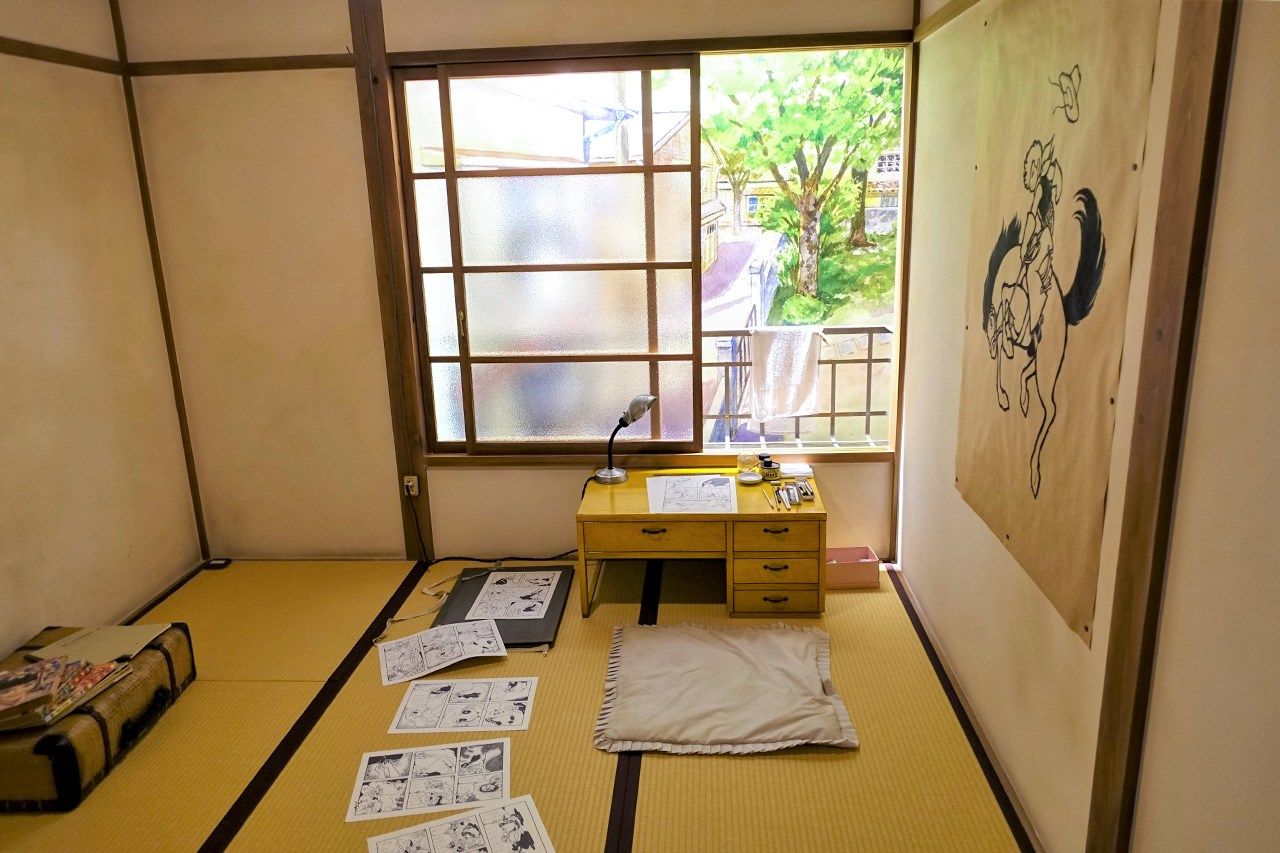 The room of Mizuno Hideko, the only female manga artist at Tokiwa-sō. A trailblazer of girls’ manga, she arrived in Tokyo from Yamaguchi Prefecture’s Shimonoseki at age 18 with nothing more than a suitcase. She often collaborated with Akatsuka and Ishinomori.

A Spark for Shuttered Shops

Locals are hopeful that the Tokiwa-sō Manga Museum will help spark a revitalization of their local shopping arcade.

Thanks to its central location near Ikebukuro and excellent bus and train access, Shiinamachi developed rapidly during Japan’s postwar high-growth era. Boarding houses for young arrivals from the countryside went up at a rapid clip. At the center of it all was a bustling shopping street running half a kilometer, home to some 200 shops. Today only around 10 remain open, though, making Tokiwa-sō Dōri a so-called “shutter street.”

Coinciding with the opening of the Manga Museum, Koide Mikio, head of PR for the Association for the Cooperation Project of Toshima Minami-Nagasaki Tokiwa-sō, closed the clock store he had inherited from his father and joined forces with the used book company Tay Two to open a shop called the Furuichi Tokiwa-sō Dōri Branch. It carries some 7,000 titles and original goods based on the works of Tokiwa-sō manga artists, and includes a café space named “Eden,” after Ishinomori and friends’ favorite coffee shop.

“I was the breakthrough,” Koide says. “I know it will take time, but my dream is to pursue local projects that creatively re-activate the empty storefronts and lure young people back to revitalize the area.”

The outbreak of the novel coronavirus delayed the opening of the museum from March 22 to July 7, and the facility remains open to visitors by reservation only, but the “Tokiawa-sō effect” is already being felt. On weekends and holidays it hosts more than 400 visitors, making families common sights on Tokiwa-sō Dōri. There are even lines outside of the Chinese restaurant Matsuba, eager to taste its specialty “retro” ramen.

When you talk about Tokiwa-sō, you have to mention “Ramen-Crazy Koike,” a character who pops up repeatedly in manga such as Q-Tarō the Ghost, Doraemon, and many other Fujiko manga series.

Koike-san really exists! The model for the character is a man named Suzuki Shin’ichi, who currently serves as the director of the Suginami Animation Museum. He moved to Tokyo from Shimonoseki in August of 1955 and lived at Tokiwa-sō for ten months. Soon thereafter he entered the animation industry, where together with Fujiko Fujio he launched Studio Zero, overseeing hits such as Osomatsu-kun and Parman. 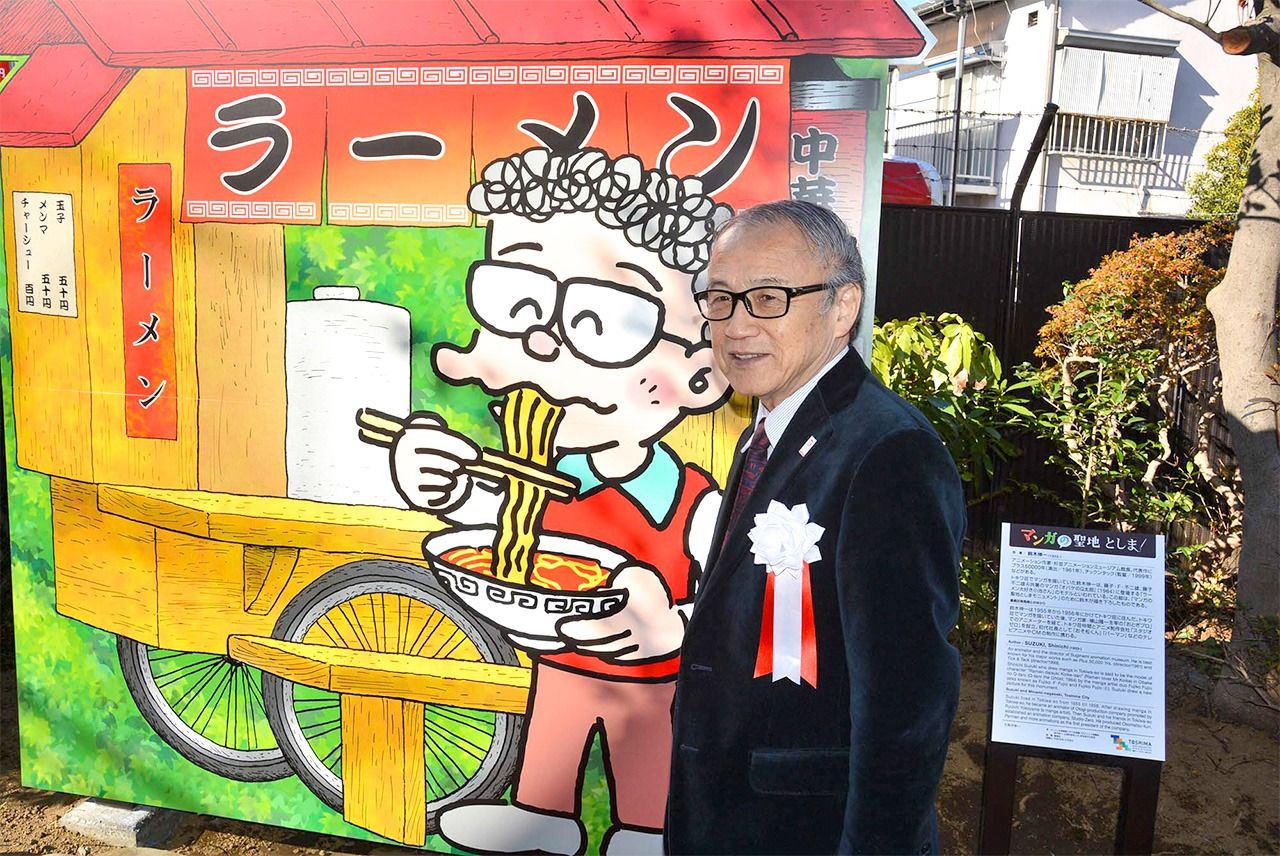 A ramen cart monument with an illustration by Suzuki Shin’ichi on display in Minami-Nagasaki Park. In Fujiko manga, he is always portrayed with a furrowed brow, but here he is smiling. (© Suzuki Shin’ichi; courtesy Toshima City)

Suzuki sheds light on the birth of the character with some behind the scenes reminiscing about Tokiwa-sō camaraderie.

“At the time we had a little tradition: when it was someone’s birthday we’d draw their caricatures. When my birthday came around everyone did mine, but none of them looked like me. Just then, and I don’t remember who it was, someone drew one with curly hair and everyone thought it was great. A while later I was shocked to see it in an episode of Q-Tarō. Fujiko remembered! I still use it as my own caricature today.”

The reason the character is called Koike and not Suzuki is because after leaving Tokiwa-sō, Suzuki roomed in a house owned by the Koikes, and everyone mistakenly assumed his family name was Koike. The character’s name stuck.

The residents of Tokiwa-sō were poor artists at the very starts of their careers, so they didn’t spend much money on food, clothing, or public baths. But they never hesitated to splurge on get-togethers with friends, movies, books, or anything else they thought might be educational or fun.

“We almost never talked about manga. It was all about whatever movie, or sci-fi or mystery book we’d read recently. But all of our conversations and horsing around and trips turned into sources for our work. Whenever someone hit, we’d all cheer them on; whenever anyone needed a helping hand, we’d assist. If visitors can sense that when they sit here in these tiny 4.5 tatami rooms, I think Akatsuka or Ishinomori would be very pleased,” concludes Suzuki, with a twinkle of nostalgia in his eyes.

(Originally written in Japanese. Banner photo: The Tokiwa-sō Manga Museum exterior. Note the square pillar with the name and the lone palm tree, faithfully replicated from the original. All photos © Amano Hisaki except the photo of Suzuki Shin’ichi.)