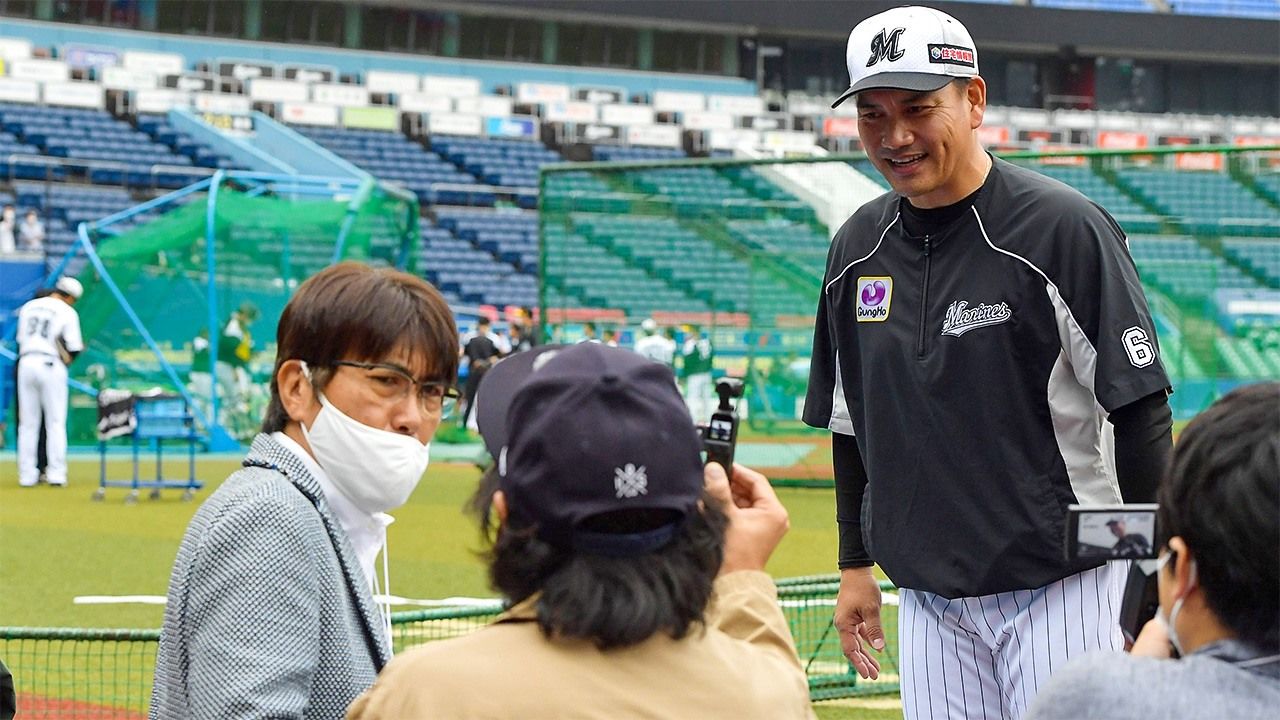 Entertainment Society Nov 19, 2020
Japan is seeing more and more big-name celebrities taking to YouTube, whether due to reduced work opportunities in the COVID-19 epidemic or personal scandals that have made them less welcome in traditional media. Some now have over a million subscribers on their channels, and hit videos with millions of views. We check out the big names creating a buzz on YouTube.

Ishibashi Takaaki Surprised at His Own Success

“Who doesn’t have a smartphone now?” jokes 58-year-old Ishibashi Takaaki as he toys with his old flip-phone. He is half-jesting, but also flashes a look of uncertainty.

On June 19 this year, the comedian—half of the hugely popular Tunnels duo—launched his own YouTube channel, called Takachannels. Ishibashi is known for his enthusiasm for baseball, which he played while at Teikyō, a high school renowned for its strong team. He gained international attention playing a wild Japanese baseball player, “Taka Tanaka,” in the Hollywood sports comedies Major League II and Major League III.

Ishibashi, who confesses to being “Internet illiterate,” initially doubted his chances for success. He posted his first video on the Nippon Professional Baseball league’s scheduled opening day, when the season ended up postponed due to COVID-19. Ishibashi hoped subscribers would number in the tens of thousands. This may seem conservative for such an influential figure on Japanese television, but he was unsure of his appeal among Japanese youth—YouTube’s main viewers in the market.

He started his channel casually, going with the flow, but it proved a resounding hit, attracting a million subscribers in just three days.

That number continued to grow, and after three months, it had 1.3 million subscribers. As of mid-November, with more than 50 videos, Ishibashi’s channel has had nearly 80 million views.

After taking a swing with the hope of making a single hit, this “old rookie” managed to hit the ball out of the park.

Surprised at the outcome, Ishibashi celebrated the success with Makkoi Saitō (Saitō Makoto), director of the television variety show Tonneruzu no minasan no okage deshita (The Tunnels, Thanks to Everyone; 1997–2018), who first proposed the idea.

A Big Name Makes His Mark

Tunnels, the comedy duo Ishibashi formed in 1980 with his former high school classmate Kinashi Noritake, hit the big time in the golden era of Japanese variety television. Their brashness and bad-mouthing of music idols earned the pair an enthusiastic following among young viewers.

This enthusiasm could not last forever, though. One commercial television producer remarks that “Young people are turning away from television as performers age. The heckling style of Tunnels also became inappropriate as the times change.” The duo’s namesake show, launched in 1988 as Tonneruzu no minasan no okage desu, ended its three-decade run in 2018 amid falling ratings. Ishibashi’s next endeavor, a late-night variety show, was also pulled after just two years. Currently, his only regular appearance on terrestrial TV is his show Ishibashi, maki o kuberu (Ishibashi Adds Wood to the Fire) , which screens even later. His YouTube venture came, by his own admission, at a time when he could have faced retirement.

But thanks to his mainstream media background, Ishibashi is able to flaunt his celebrity persona. Also, despite being labeled as a low-budget effort, because his channel’s content is produced by a team of variety show veterans, who have turned comedy into a fine art, the quality stands out among other YouTube content. The combined effect of the screen format, comic captions, and performers’ reactions gives the impression of a proper TV show, despite the skeleton staffing. It exudes the “grass-lot baseball” charm of YouTube, but with major-league players.

Kiyohara Kazuhiro, former fourth hitter with Japan’s Yomiuri Giants baseball team, appeared on the channel for three consecutive days, gaining over 6 million views on the first day alone. Kiyohara was once adored nationwide, but he was arrested for possession of stimulants in 2016. These days, he rarely makes public appearances, as his suspended sentence only ended in 2020, and he is undergoing treatment for drug dependence. He looked relaxed on Ishibashi’s YouTube channel, though, even discussing drugs—a topic that would be taboo on regular television due to strict compliance requirements. Kiyohara joked flippantly in response to Ishibashi’s merciless jibes, resulting in material that could only be broadcast on the Internet.

It was filmed on location at a barbecue restaurant in Roppongi, Tokyo, where the pair exchanged insider anecdotes about their acquaintances in the world of baseball. Of course, this kind of content struck a chord with the audience.

Prior to launching on YouTube, Ishibashi complained of a decline in opportunities to appear on regular TV. Now, with fresh enthusiasm, he has clearly relit his old spark—the dream of many a celebrity. In its infancy, YouTube was scorned as kids’ stuff, but it has given birth to Japanese star YouTubers who now make big money, including Hikakin, Hajime Shachō, and the members of the Fischer’s and Tōkai OnAir groups, while the platform has transformed from underground to mainstream.

According to a recent survey, the leading career aspiration among elementary and junior high school boys is YouTuber, while it scores third highest for senior high school boys. As the online video platform has gained wider public recognition, it has replaced television as a dream workplace.

The manager of a major advertising agency concurred that TV advertising revenue would continue to drain to online media. This will result in significant cuts to TV production budgets. With the aging population and stagnant birthrate, companies are forced to produce advertising targeting the age group with the greater purchasing power, on a limited budget. Previously, commercial broadcasters targeted viewer ratings by household, but this has shifted to ratings on an individual level, to a core group, or to consumers of a specific demographic.

In this regard, online advertising is effective because it employs unique algorithms to show content aimed at each user’s interests. Scrutiny is intensifying as to which celebrities boost ratings when they appear, so it is inevitable that more will relocate from mainstream television to YouTube.

The System Works Against Celebrity Wishes

One thing is certain—even if certain celebrities attract higher ratings for a TV station, their appearance fee will not increase proportionally. But YouTube offers a “partner program,” where creators earn according to the number of viewers and the advertisements played during their videos.

Increased video viewership, which varies according to the popularity of the performer, is now directly linked to income. This offers the benefit of visualizing popularity in a way that was not part of conventional show business. Such a system must be a welcome chance indeed for artists whose passion is simply to perform in front of a crowd.

YouTube also offers more opportunities to performers to tailor their expression to their core audience, rather than trying to appeal to the majority, the basic stance of mainstream television.

Last year, Japan saw the start of a new imperial era, and the dawn of a new era of celebrity YouTubers—the number of such official channels more than doubled to 118 in 2019, according to the online video analysis website YouTuber Next. Growth has skyrocketed in 2020, with over 200 new channels appearing in Japan tagged as “celebrity.” Of the many newly registered artists, a few major names stand out: comedian Egashira 2:50, actor Satō Takeru, singer and actor Tegoshi Yūya, actress Kawaguchi Haruna, music group NiziU, comedienne Watanabe Naomi, and pop duo Nishikido Ryō and Akanishi Jin.

This is not to say that all celebrities who make their play on YouTube meet with success. Some have not seen subscriber numbers or views grow despite their fame and ubiquity on television. Even when they have hired specialized staff and invested heavily in production, some have been frustrated by the lack of interest or profit in comparison with the effort required.

The Need for Ongoing Results

Ishibashi Takaaki’s venture has been blessed with success, but many big names in the industry must hesitate at the thought of tackling this brand-new frontier. There is always the fear of being branded as a failure, or viewed as a “downgraded” celeb who couldn’t make it in TV and had to go online instead.

Furthermore, despite the increasing number of high-profile celebrities joining YouTube, it is not all smooth sailing ahead, especially as competition in this market grows fiercer. Although they have a clear advantage over unknown members of the public, given YouTube’s archiving of livestreamed videos, it is crucial to keep producing content that meets a certain standard.

In the future, YouTube view count will become more of an issue that TV viewer ratings ever were. Moreover, performers will be confronted with the most unpredictable factor—popularity. Finally, their production skills will also be put to the test like never before.

(Originally published in Japanese. Banner photo: Preparing a segment for his YouTube channel, Ishibashi Takaaki greets Iguchi Tadahito, manager of the Chiba Lotte Marines, before a game against the Fukuoka SoftBank Hawks at Zozo Marine Stadium, Chiba, on September 25, 2020. © Sankei.)