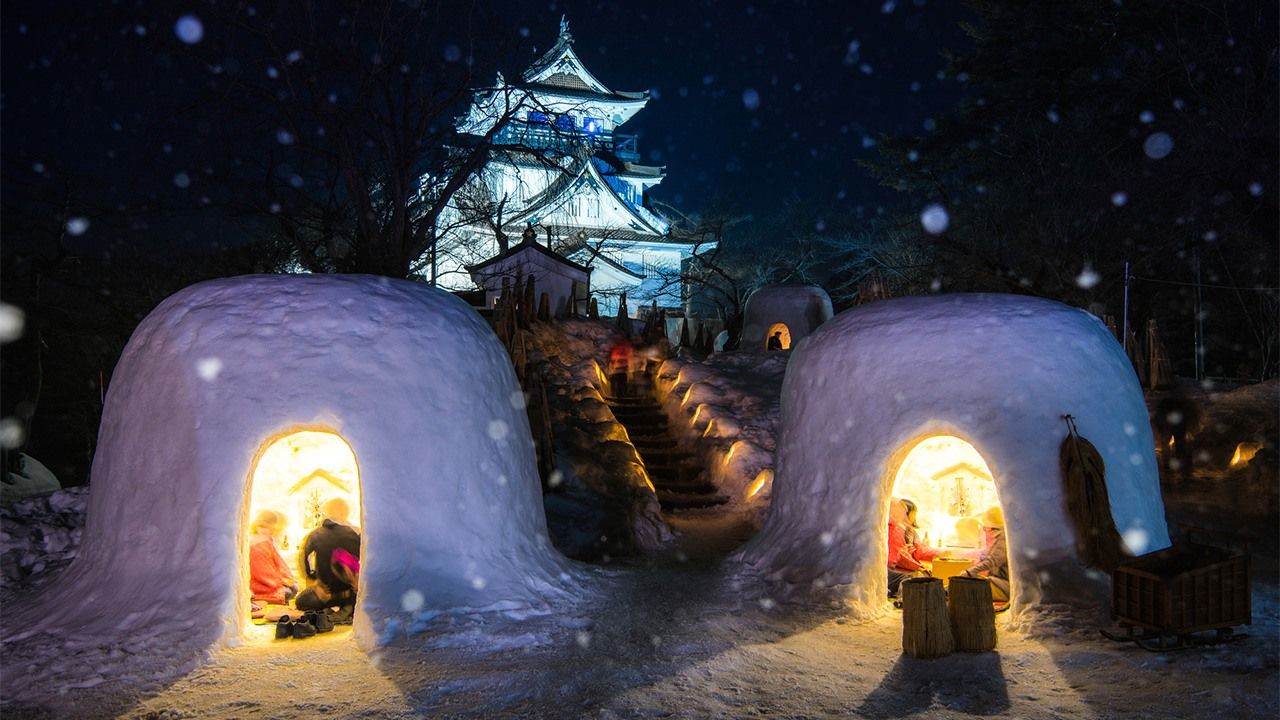 Travel Culture Food and Drink Oct 12, 2020
Akita Prefecture in Japan’s north is known for its harsh winters, natural scenery, and hardy cuisine. The often overlooked prefecture has also been in the news as the birthplace of Prime Minister Suga Yoshihide.

Akita Prefecture sets along the Sea of Japan in the Tōhoku region in northern Honshū. It is Japan’s sixth largest prefecture by size. Largely mountainous, its main ranges are the north-to-south running Ōu Mountains along the eastern border with Iwate Prefecture and Dewa Mountains in the center of the prefecture. Ancient beech forests cover the Shirakami Mountains, a UNESCO World Heritage Site, that straddle the border with Aomori Prefecture in the north, and the highest peak, the 2,236-meter tall Mount Chōkai, overlaps the prefectural boundary with Yamagata in the south.

The climate is cool and marked by abundant precipitation, especially during the winter, with snowfall in some areas reaching several meters. Agriculture, particularly rice cultivation, and forestry have long formed the backbone of the economy, but recently the manufacturing of electronic parts has grown in importance. The prefecture ranks thirty-eighth by population with 960,000 people, a third of whom live in the central coastal region centered on the capital of Akita. 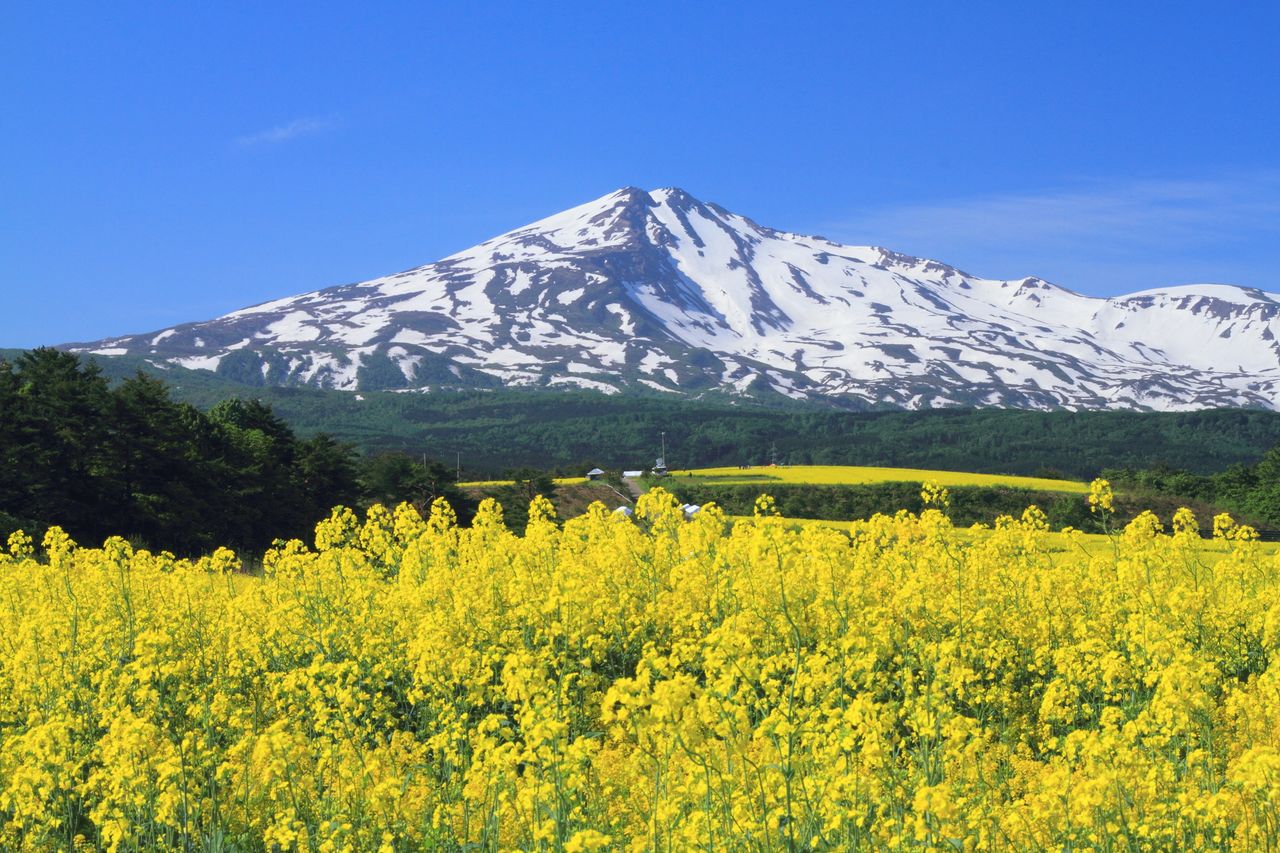 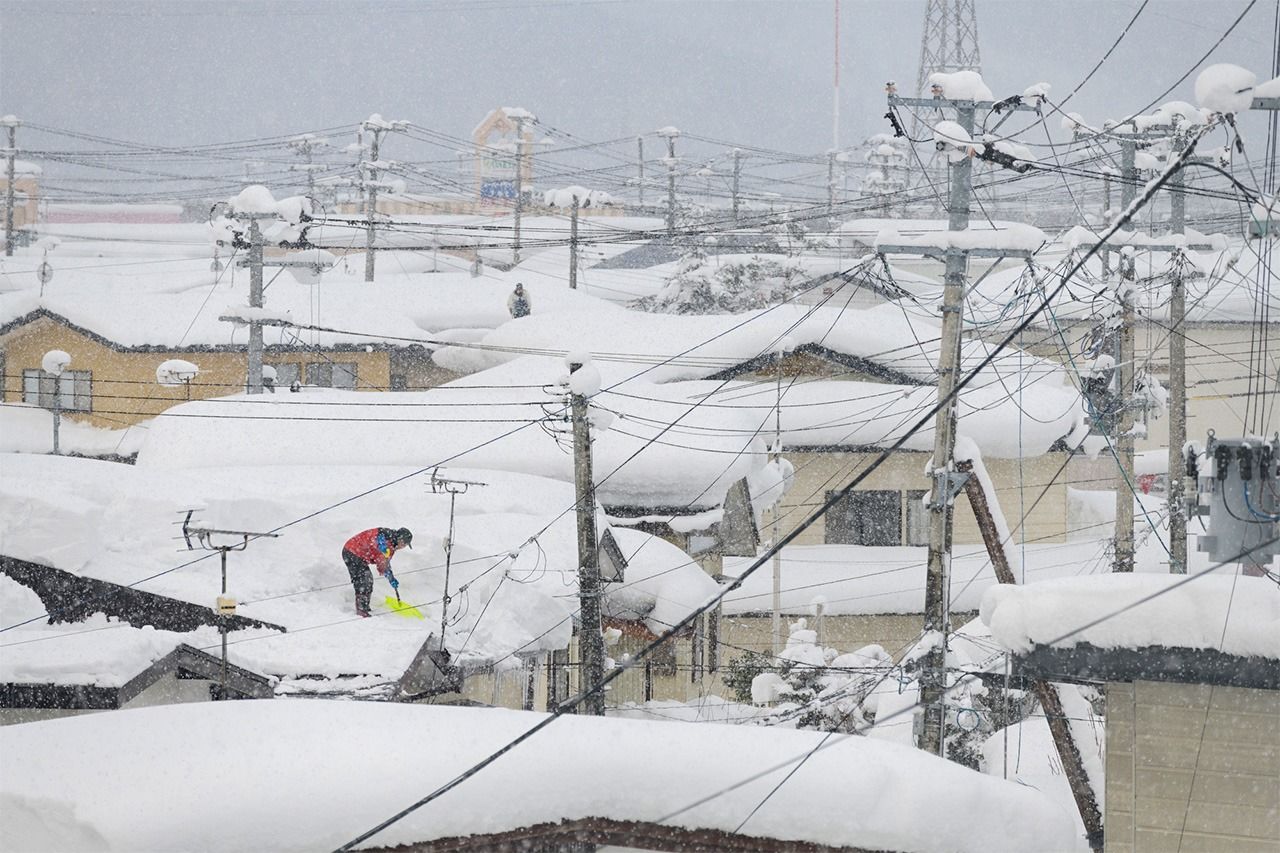 Snow-covered roofs in the city of Yuzawa, the hometown of Prime Minister Suga Yoshihide. (© Pixta)

Akita’s mountainous terrain and rugged coastline offer visitors scenic views and a wide range of outdoor activities, including hiking, cycling, and skiing. One of the prefecture’s best-known natural wonders is Lake Tazawa, which occupies an ancient caldera. The cobalt waters of the lake are the deepest in Japan, reaching a maximum depth of 423 meters, and remain unfrozen throughout Akita’s frigid winters, which a characteristic legend ascribes to a dragon dwelling below the surface.

The prefecture is blessed with abundant thermal waters and boasts numerous hot spring resorts, including the acclaimed Nyūtō Onsenkyō near Lake Tazawa in the foothills of Mount Komagatake and Furusawa Onsen in the city of Ōdate.

Akita hosts a number of nationally famous events. Each year on the fourth Saturday of August, fireworks enthusiasts descend on Daisen to watch the country’s top pyrotechnicians battle it out in the Ōmagari National Fireworks Competition. On February 15 and 16, igloo-like snow houses called kamakura, some as tall as three meters, light up the town of Yokote and celebrants enjoy the sweet drink amazake and grilled rice cakes in a winter festival dating back more than 400 years. In spring, flower lovers flock to view the weeping cherry trees that line the streets of Kakunodate in Senboku, known as “little Kyoto” for its wonderfully preserved samurai residences. 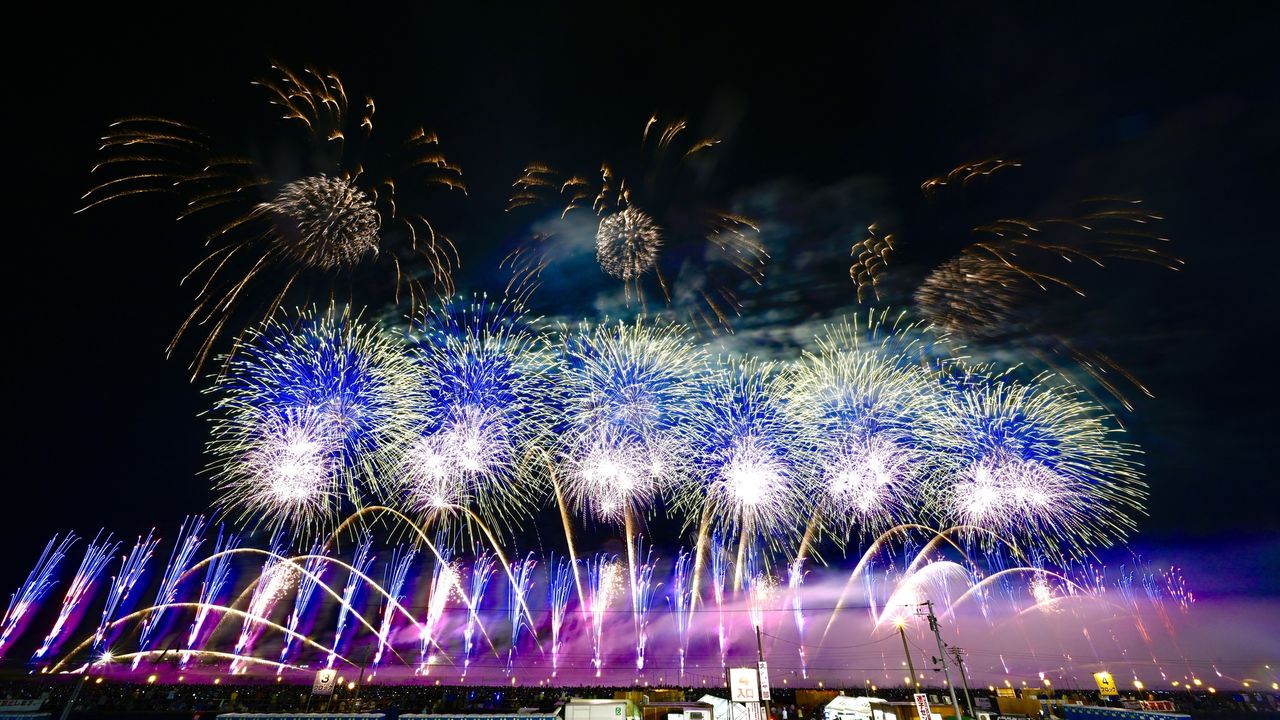 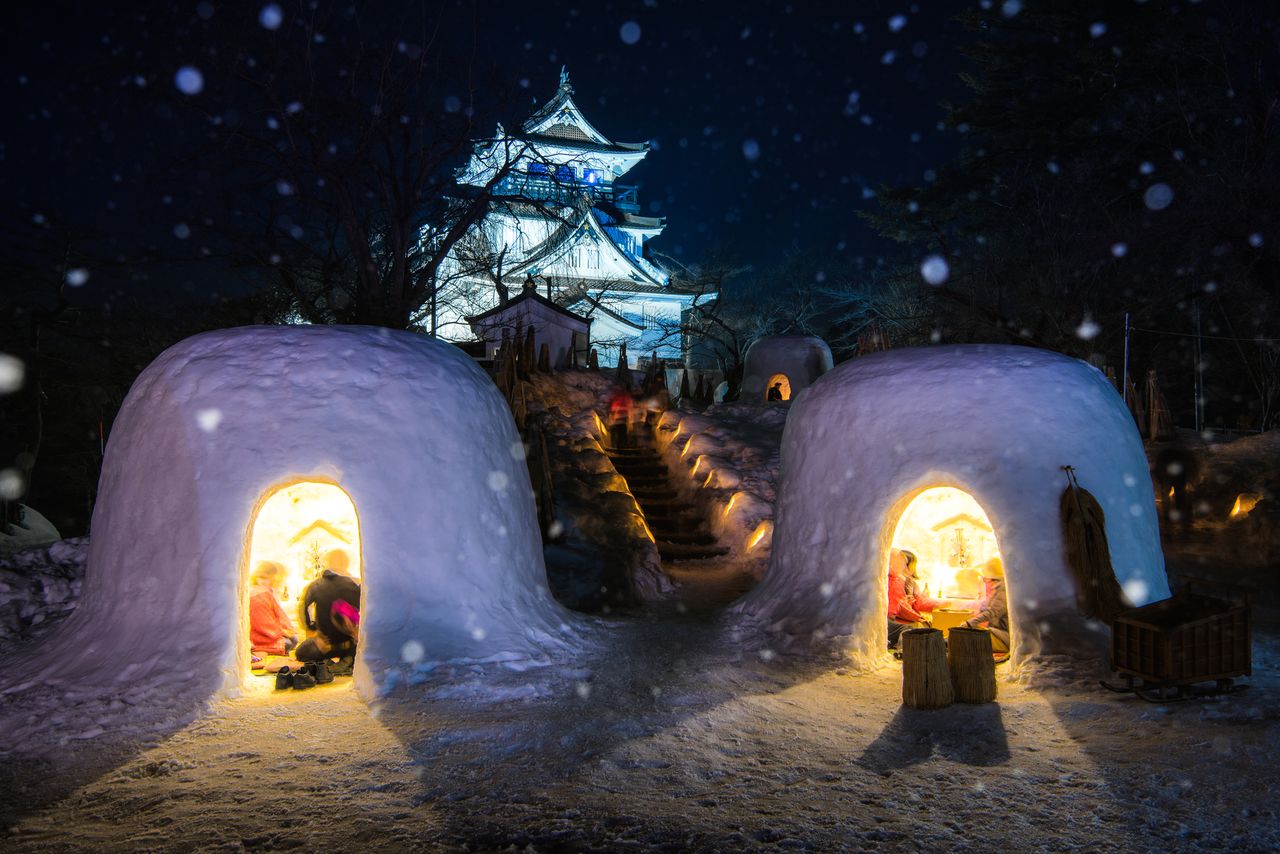 The prefecture is a rich storehouse of traditional customs and is home to 17 rituals that are designated as Japanese national important folk-culture assets. One of the most recognizable is the demon-like namahage of the Oga Peninsula. Each New Year’s Eve, bands of these fierce-looking spirits descend on the community, brandishing giant knives and terrifying children with their growling as they trek from home to home looking for “loafers and brats.” Namahage and other raihōshin (divine visitors) from around the country were added to the UNESCO representative list of the Intangible Cultural Heritage of Humanity in 2018.

The capital of Akita is the site of the lively Kantō Festival, held August 3–6, featuring nighttime parades of precariously balanced bamboos poles called kantō decorated with rows of swinging paper lanterns. The kantō, towering 12 meters and weighing upwards of 50 kilograms, are said to resemble ripened rice plants and are borne by carriers called sashite who show off their skills by balancing the poles on their hands, hips, and even foreheads. At the peak of the festival, the long lines of wavering kantō appear like a great river of light. 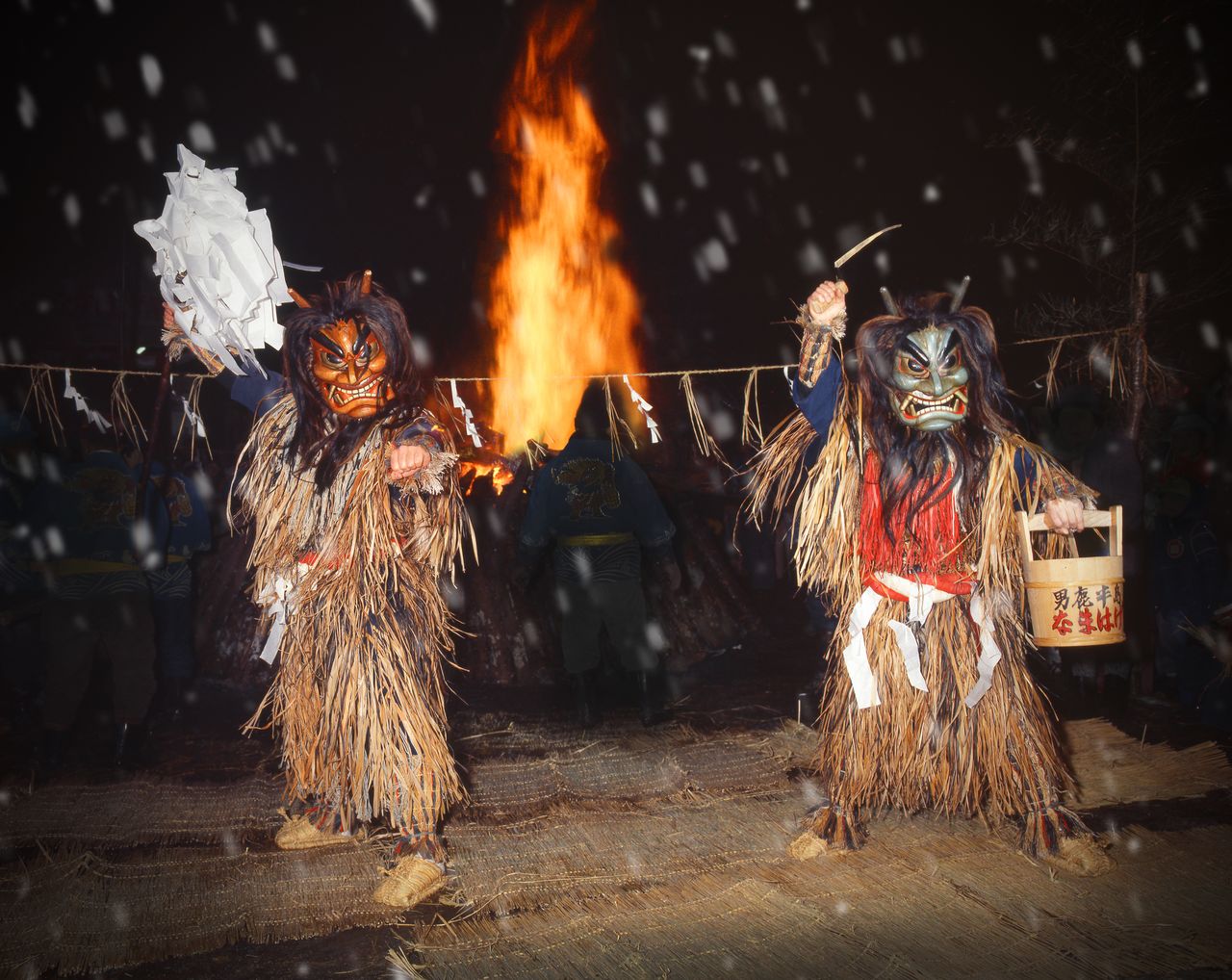 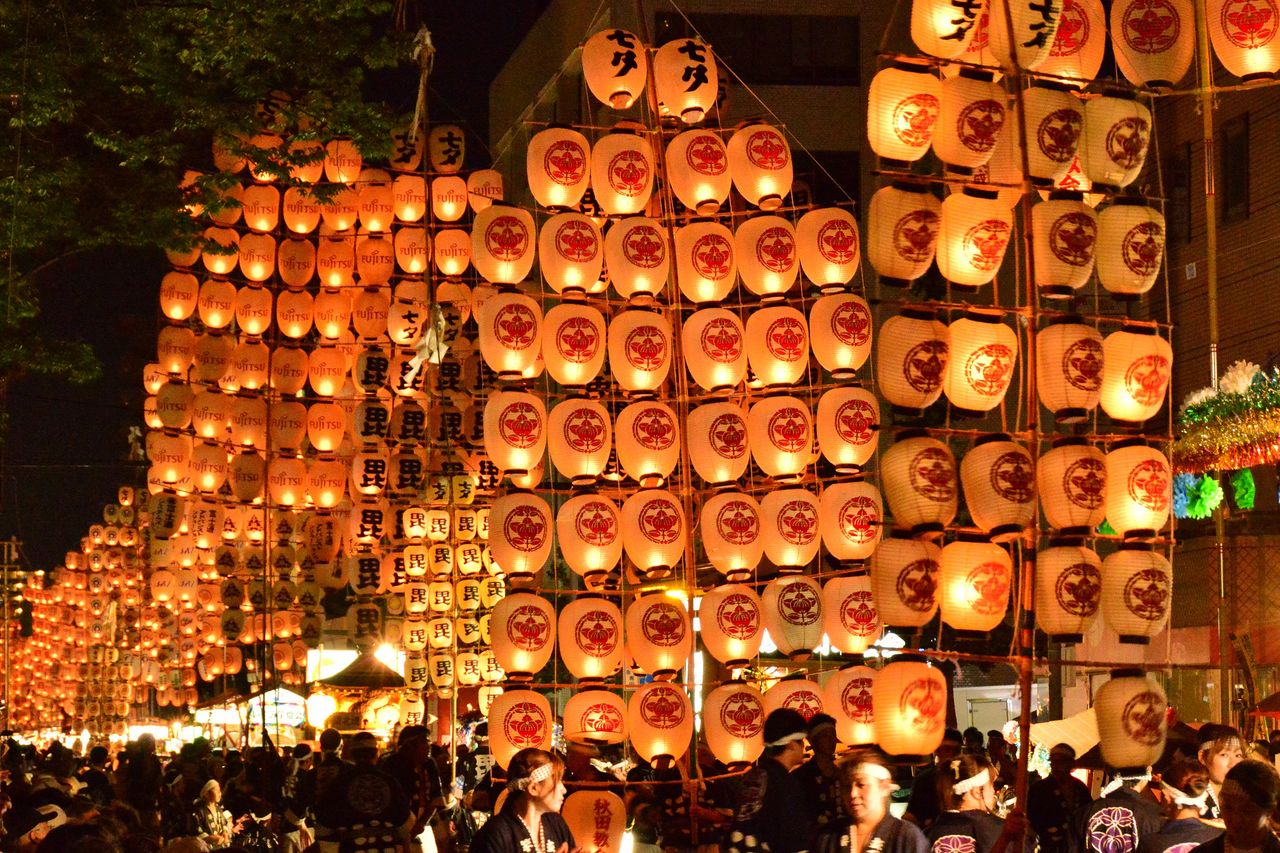 Rows of kantō parade through the streets of Akita. (© Photolibrary)

Akita’s reputation as a rice-producing area is reflected in traditional foods like kiritanpo. Made from pounded rice that has been wrapped around a wooden stick and roasted over an open flame, these tube-like creations are combined with ingredients like mushrooms, Japanese parsley, and poultry to make a rich stew. Authentic kiritanpo-nabe, as the dish is known, features hinai-jidori, a breed of chicken revered for its succulent meat that was first cultivated around the mountainous headwaters of the Yoneshiro River in the northern part of the prefecture. Hinai-jidori are also admired for their beautiful plumage and join the native dog breed Akita-inu in being designated as National Natural Monuments. 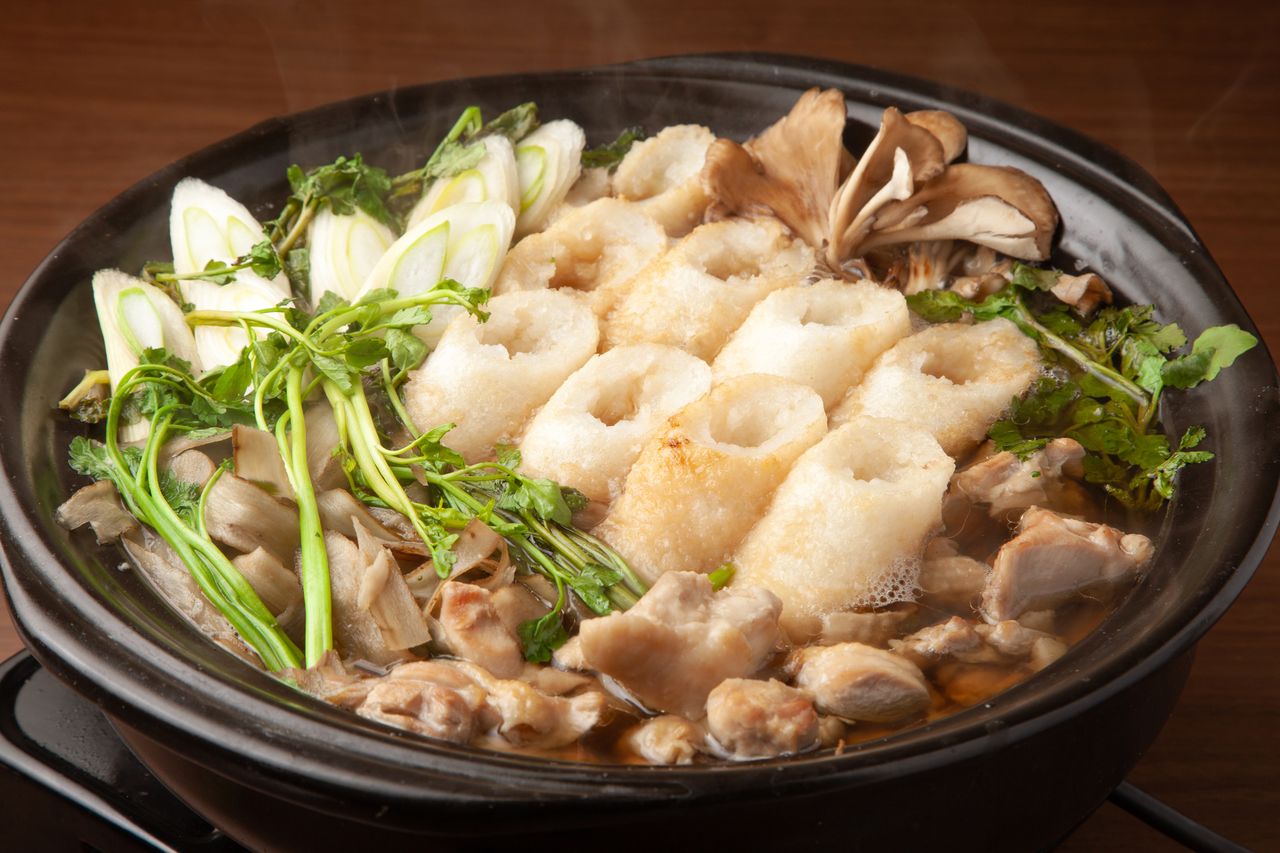 With its long coastline, Akita offers diners a wide variety of fresh seafood. Top among these is a species of sandfish known regionally as hatahata, which is typically enjoyed grilled with salt or smothered in miso. The fish is also fermented to make a pungent seasoning sauce called shottsuru, a key ingredient in the traditional coastal stew shottsuru-nabe that features various vegetables and the meat of the hatahata itself.

Inaniwa udon, a type of hand-made wheat noodle, is a specialty of Yuzawa in the southern part of the prefecture. It is thinner than most other types of udon, making it easier to slurp down. It is considered along with Sanuki udon from Kagawa Prefecture and Mizusawa udon from Gunma Prefecture as one of Japan’s “top three” udon varieties.

Akita is one of Japan’s top sake producers, ranking fifth nationally in the amount of nihonshu brewed, and its citizens are also hardy consumers of alcoholic beverages. The prefecture boasts a number of leading labels of regional jizake and traditional side dishes like iburigakko—daikon radish that has been pickled and smoked. 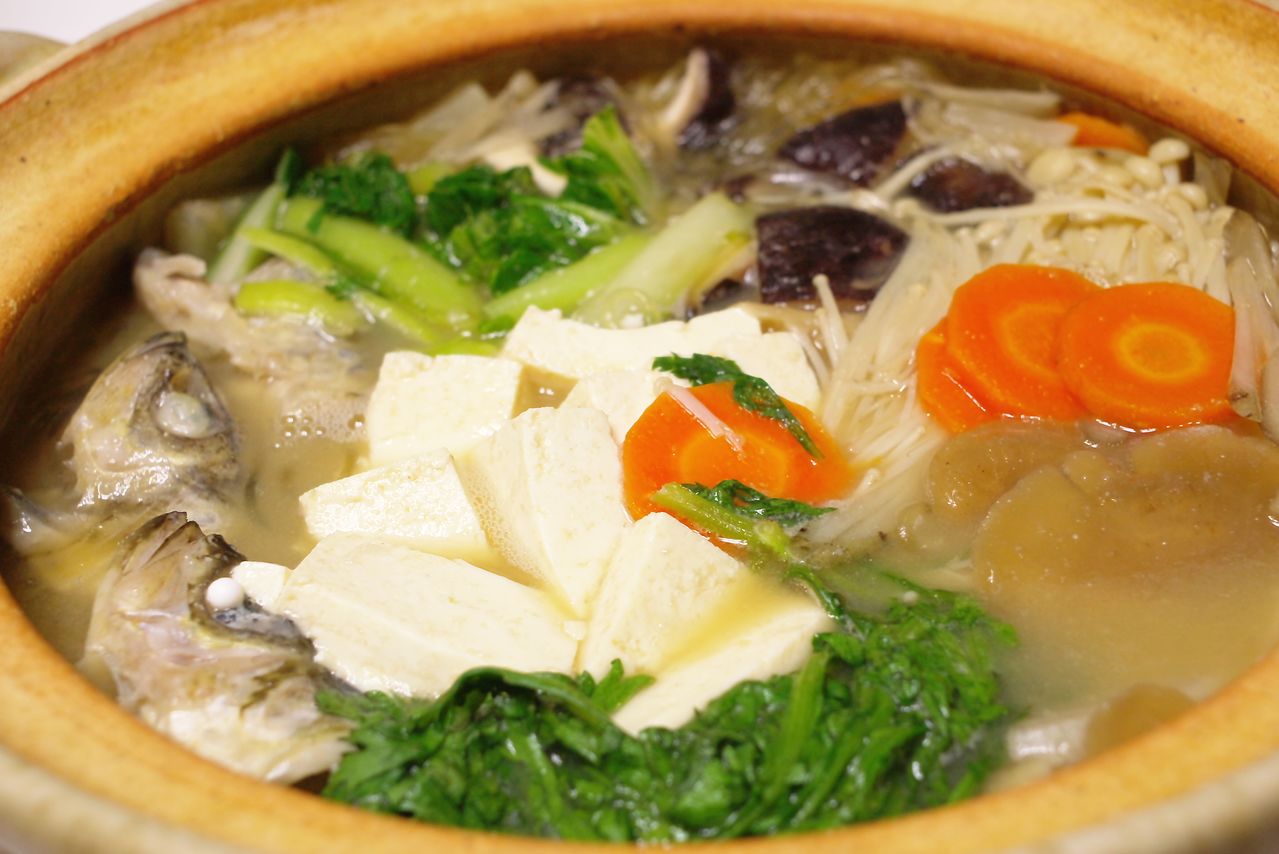 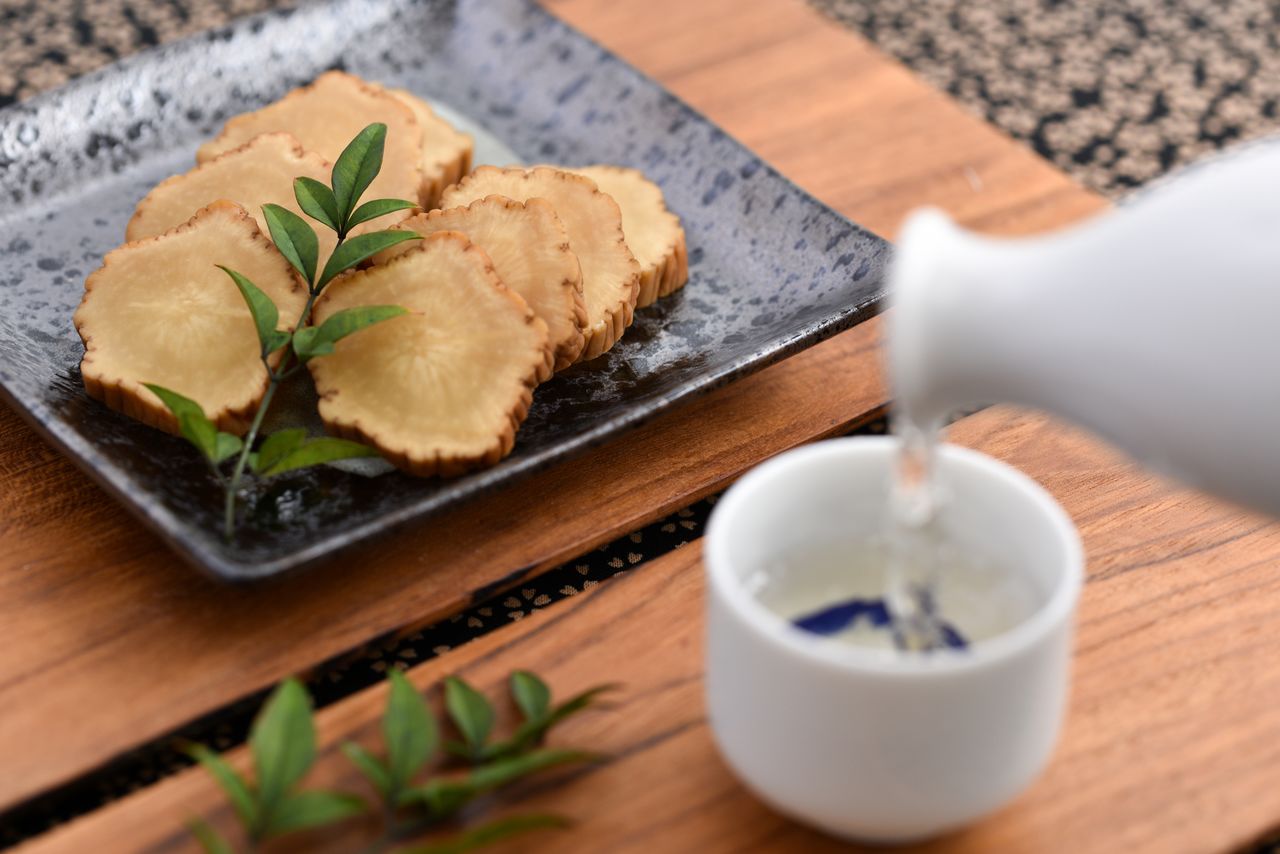 Iburigakko are crunchy and have a distinct smoked flavor. (© Pixta) 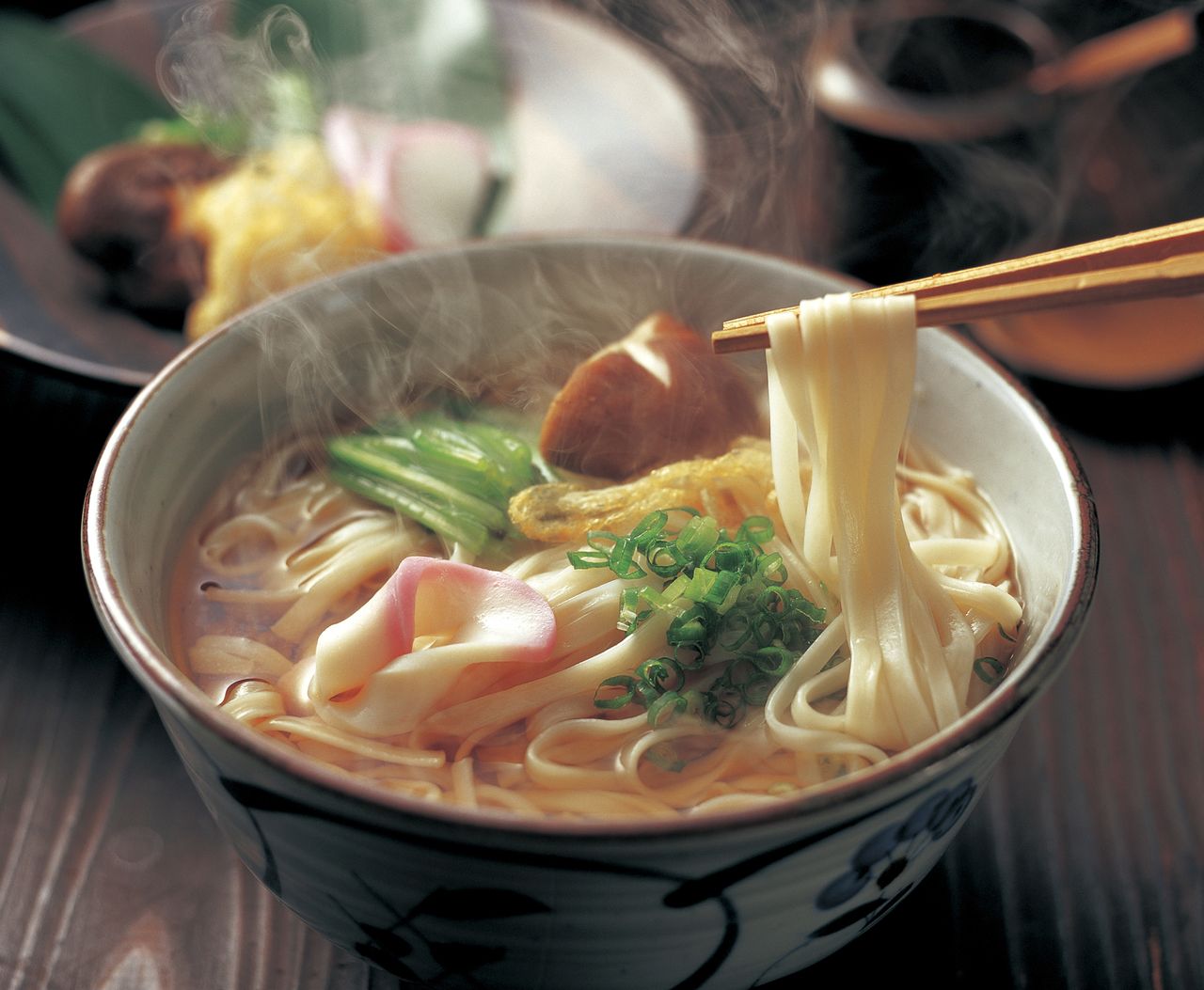 Akita is reputed as a land of exceptionally beautiful women, a reputation some trace back to the Heian period (794–1185) and the famed female poet Ono no Komachi. Although beauty is in the eye of the beholder, the prefecture’s cool, damp climate, frequently overcast skies, and ample fresh air are thought by some to be beneficial in keeping skin looking young. 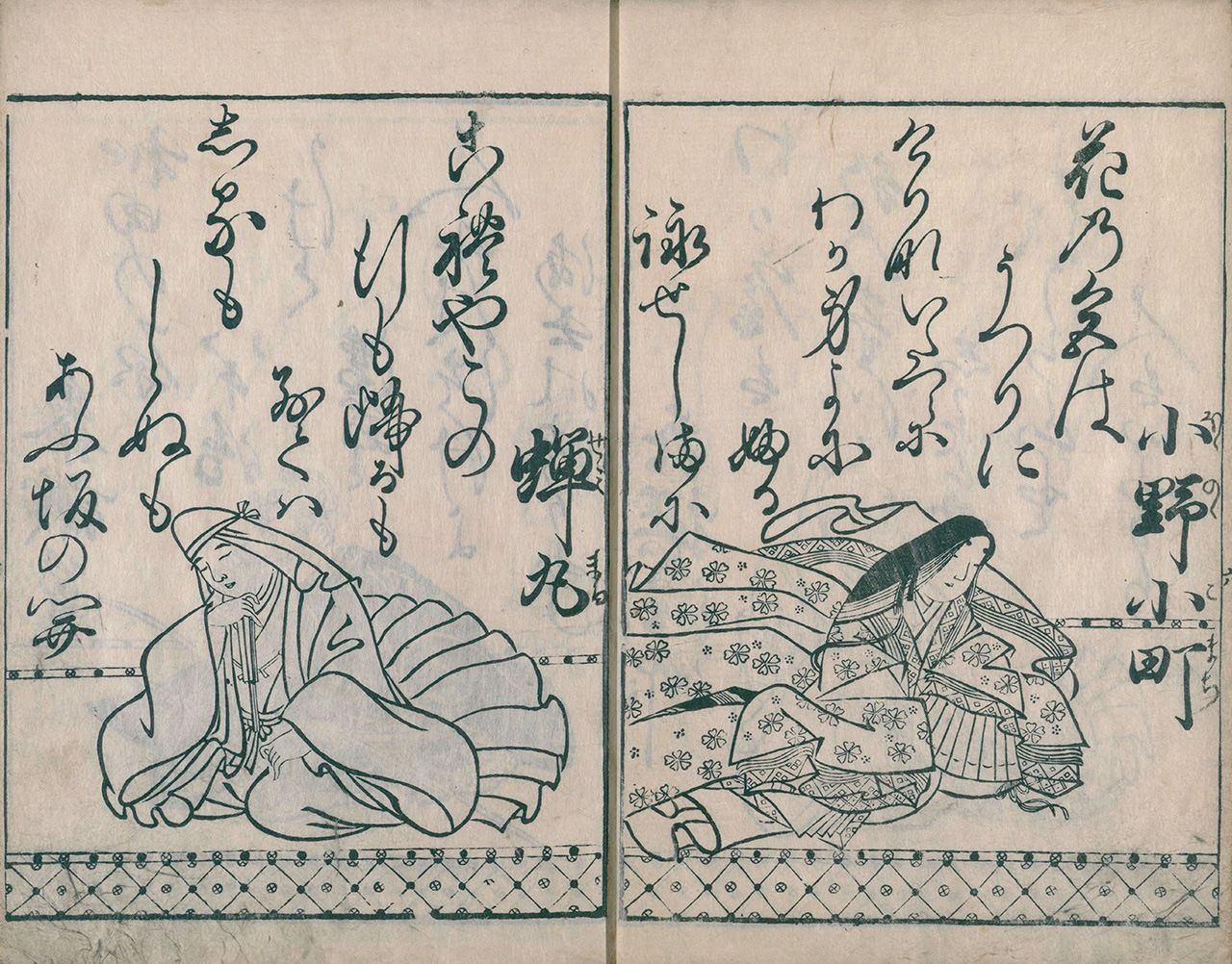 Ono no Komachi, right, in an edition of Hyakunin isshu (trans. One Hundred Poets, One Poem Each) published in 1680. (Courtesy of the National Diet Library)

Akita joins neighboring Aomori and distant Okinawa as prefectures renowned for distinct—and to some, impenetrable—dialects. Akita-ben, as it is known, is characterized by its broad lexicon of regional words and the distinctive intonation of speakers, whose brevity in discourse can reduce whole conversations to a few syllables.